Shinsekai Into The Depths Review (Switch) 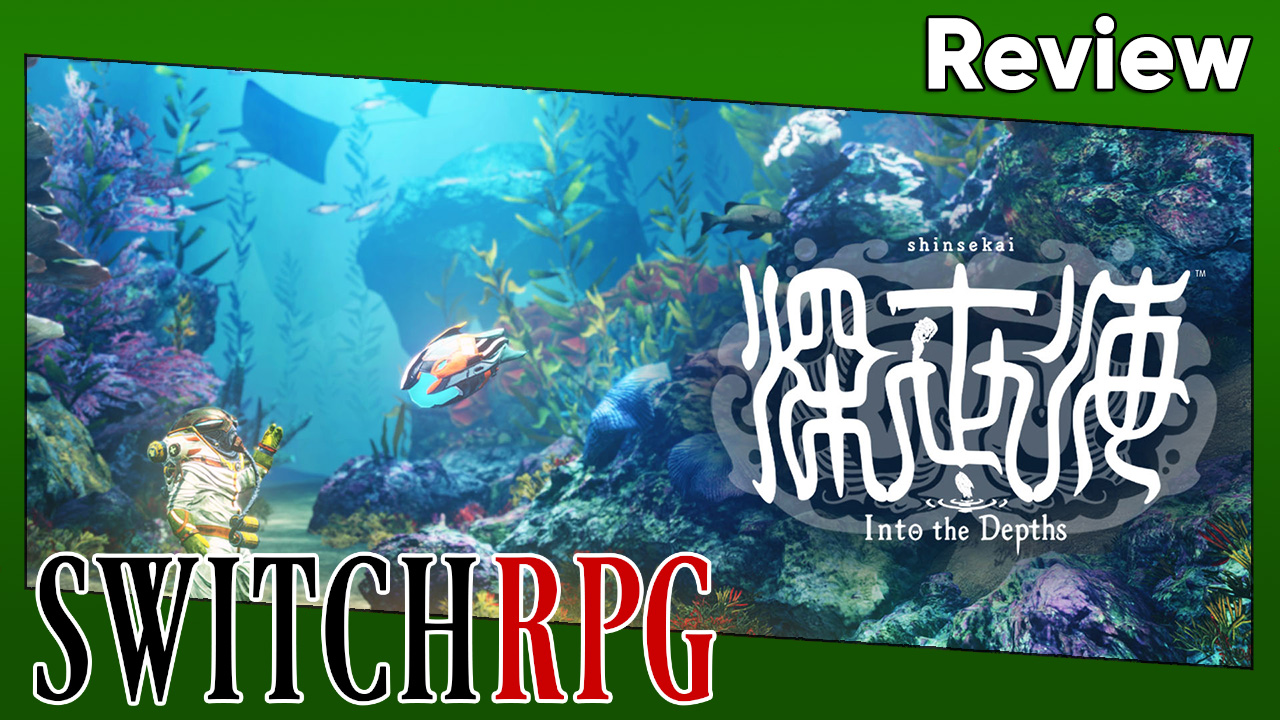 The Switch eShop isn’t necessarily hurting for Metroidvanias – it has quite a few already that are exceptional, and many others that aren’t so great. In such a contested genre, what can new entries possibly do to grab the attention of the average player? How about one set in the unknown depths of the ocean, developed by Capcom, and originally released on Apple Arcade? If that has piqued your interest, then let’s dive into the depths of this rather unique Metroidvania and see what it has to offer. 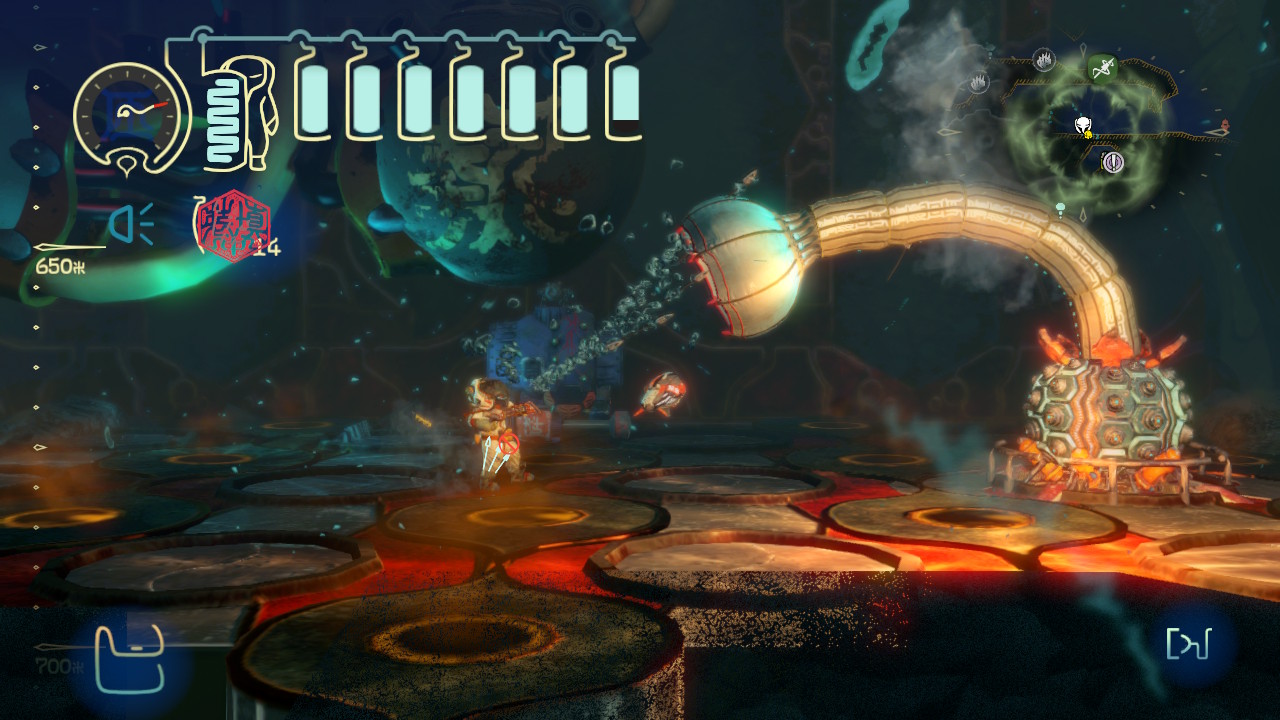 Shinsekai puts you directly in the suit of the last human survivor, who is forced into an underwater world after the lands above become encrusted in uninhabitable ice. Early on, it becomes apparent that our adventurer’s goal is to dive further into the depths and explore all that the sea has to offer. You will soon realize that accomplishing that feat – getting to the ocean floor – isn’t as easy as it sounds. In the beginning, your suit simply isn’t prepared for the grand task ahead, so you set off to explore the ocean and see what can be found in order to attain that which is out of reach. Along the way, other story elements are told through terminals that act as a looking glass into the past. 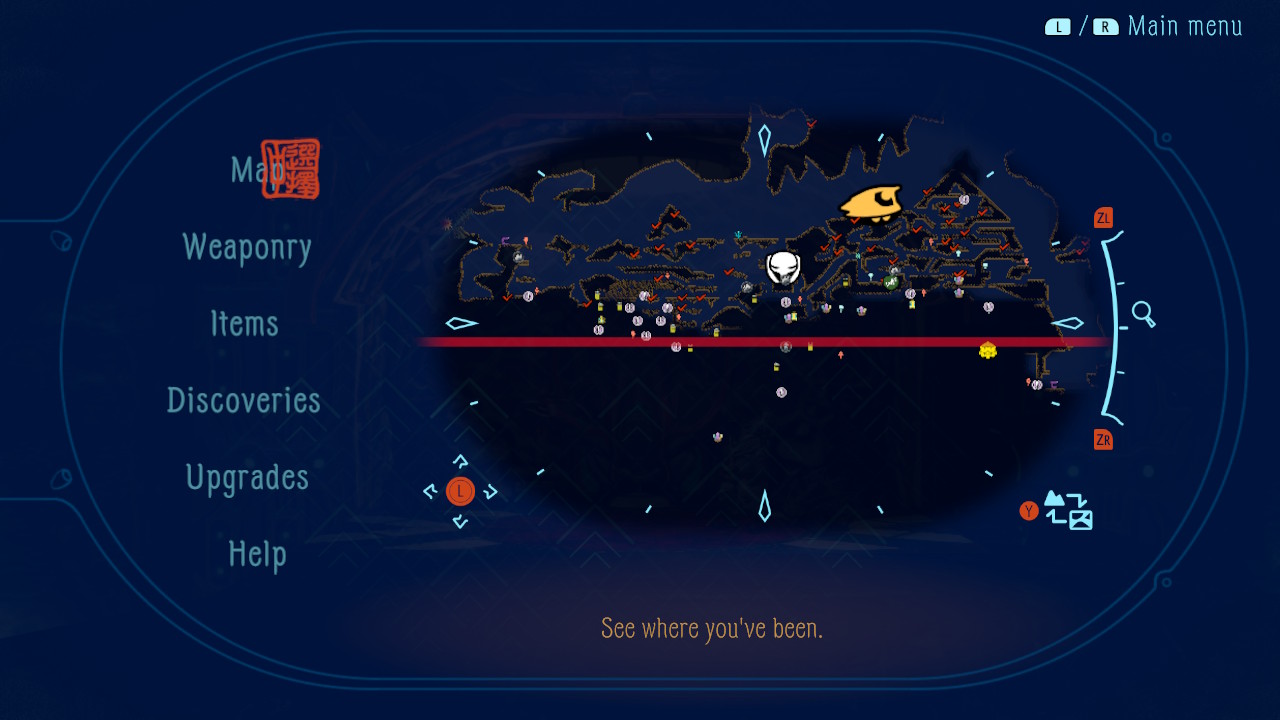 While Shinsekai might not have the deepest of stories, it makes up for it with some interesting gameplay components. Shinsekai is about survival and exploration – both work together in creating a wonderful, yet mysterious underwater experience. Like most traditional Metroidvania games, you will be tasked with traversing an enormous world map that gates you based on your current abilities and upgrades. In the realm of Shinsekai, this means keeping tabs on your oxygen while out searching for minerals to upgrade your gear. This process ultimately leads to a suit better equipped to handle the ever-increasing depths, as going too far too quickly will extensively damage your gear. This is portrayed through the coloring of certain areas, with “red” appropriately signaling a section that cannot be explored until certain upgrades are obtained. 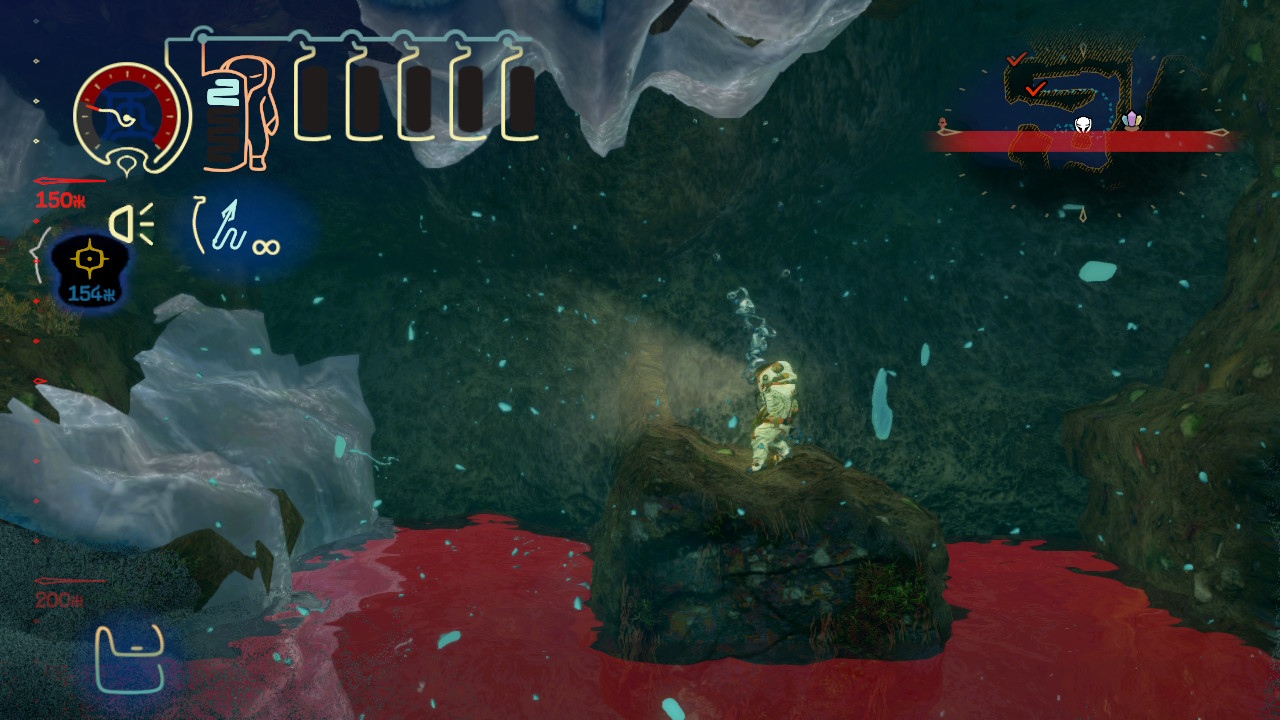 Oxygen is your life meter in Shinsekai – run out and you perish – but it’s also consumed when using your thrusters to move around the water. You can acquire more tanks as you explore all the nooks and crannies of the map. You can also upgrade the amount of tanks your character can hold, which becomes important later. Unfortunately, oxygen tanks are very fragile, and any hard landing or banging into a wall will make them crack. Since exploration is key, extreme caution must be taken in order to prevent losing tanks entirely. Damaged tanks can be repaired via consumables, however, in addition to the complete replacements which can be found scattered about the world.

Exploration is one of Shinsekai’s greatest strengths – it’s a wonderful experience that forces you to take some risks but rewards the extra effort. While you search to discover what has happened to humanity, and what lies in the depths of the ocean, you will run into various forms of wildlife. Some you can easily navigate around while others, such as the shark, will attack the player. Luckily, you acquire an arsenal of harpoon-based weapons that help you get a handle on the ocean wildlife. Some weapons can be used as offensive projectiles, others allow you to grapple onto enemies, and one can even bore through rocks. All of these aid in combat, along with your trusty pickaxe, while traversing this sprawling world. 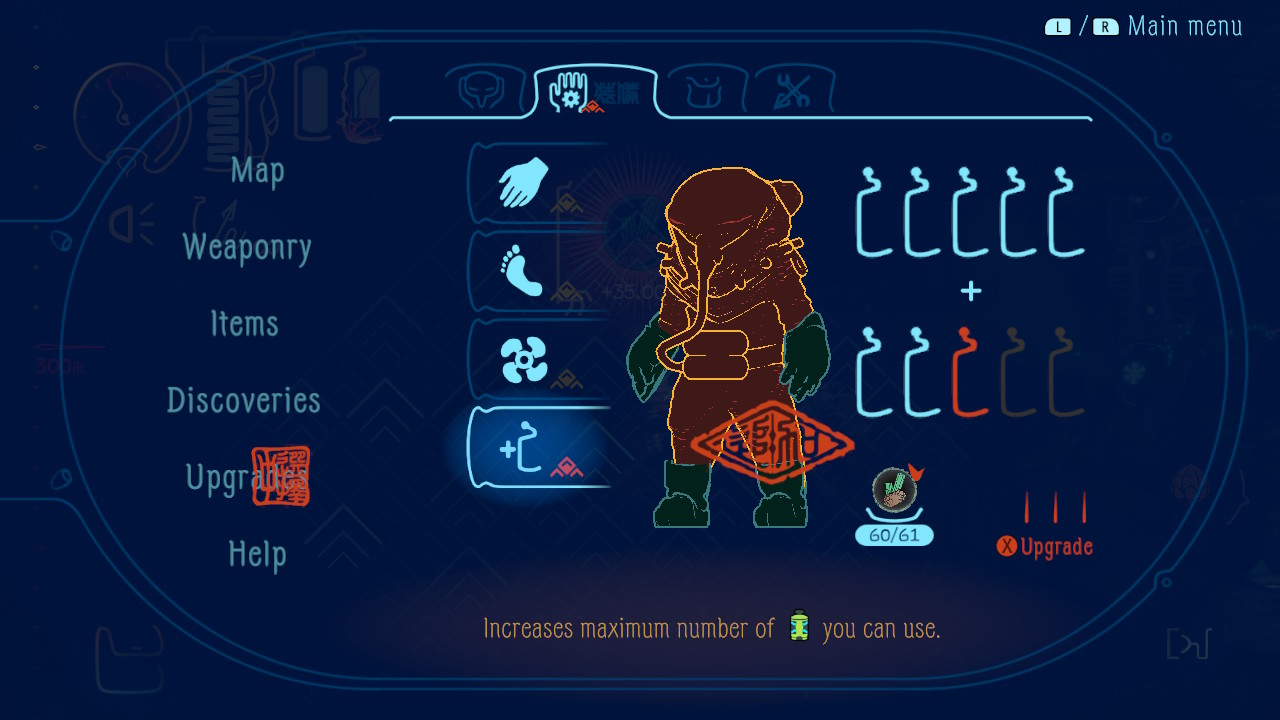 The pickaxe is a very valuable tool. In addition to using it against the wide array of aquatic wildlife – including the epic boss fights – it comes in handy when searching out minerals for upgrades. Early on, you learn that searching out minerals, extracting, and collecting them are essential to progressing in Shinsekai. The pickaxe can help by allowing you to climb onto walls and extract any element you discover. There are several ways to discover where minerals are located, one being a “pickaxe sonar” that will display nearby nodes on the map when you strike certain areas. Eventually, you will get a submarine which has the ability to send out actual sonar signals while simultaneously improving your means of travel. Speaking of the submarine, it can enter the red water areas even if your suit cannot currently support it. This allows players to take some risks and access areas their suit currently can’t support.

Minerals aren’t only used to craft suit upgrades; they can also be used to upgrade your inventory slots and make consumable items. Consumables available range from allowing you to repair cracked or damaged tanks, refill a portion of oxygen in a pinch, or temporarily allow you to traverse red water without worrying about the normal repercussions. Put all these gameplay elements together and you have a wonderfully crafted 2D open world experience – not to mention all of the collectibles that are bound to make any completionist happy. 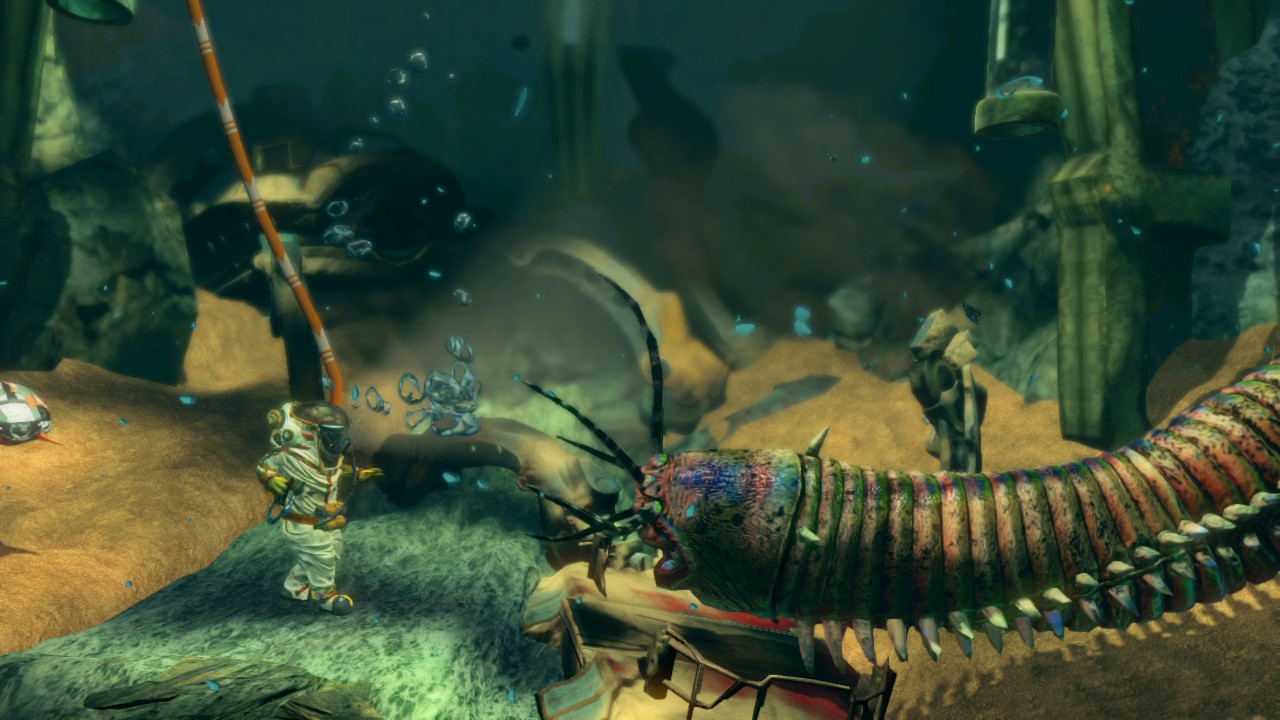 For the most part, the 10-20 hours that Shinsekai offers looks great on the Switch. Individual areas are beautiful, and the aquatic wildlife models are nicely designed and filled with detail. On paper, the red water “danger zone” might seem like something that would be an eyesore, but it is actually well done in execution. Performance is solid, but there are some instances of texture pop-in that are accompanied by a rather odd grid effect, at times. Besides that, the vast underwater world is fun to explore whether you are boosting along using your thrusters, cruising along in the sub, or are piggybacking off the sub (via tether) in order to take advantage of its oxygen supply. Lastly, the original soundtrack is impressive, and I highly recommend you play this game with headphones in order to fully embrace the immersive sound design presented here. 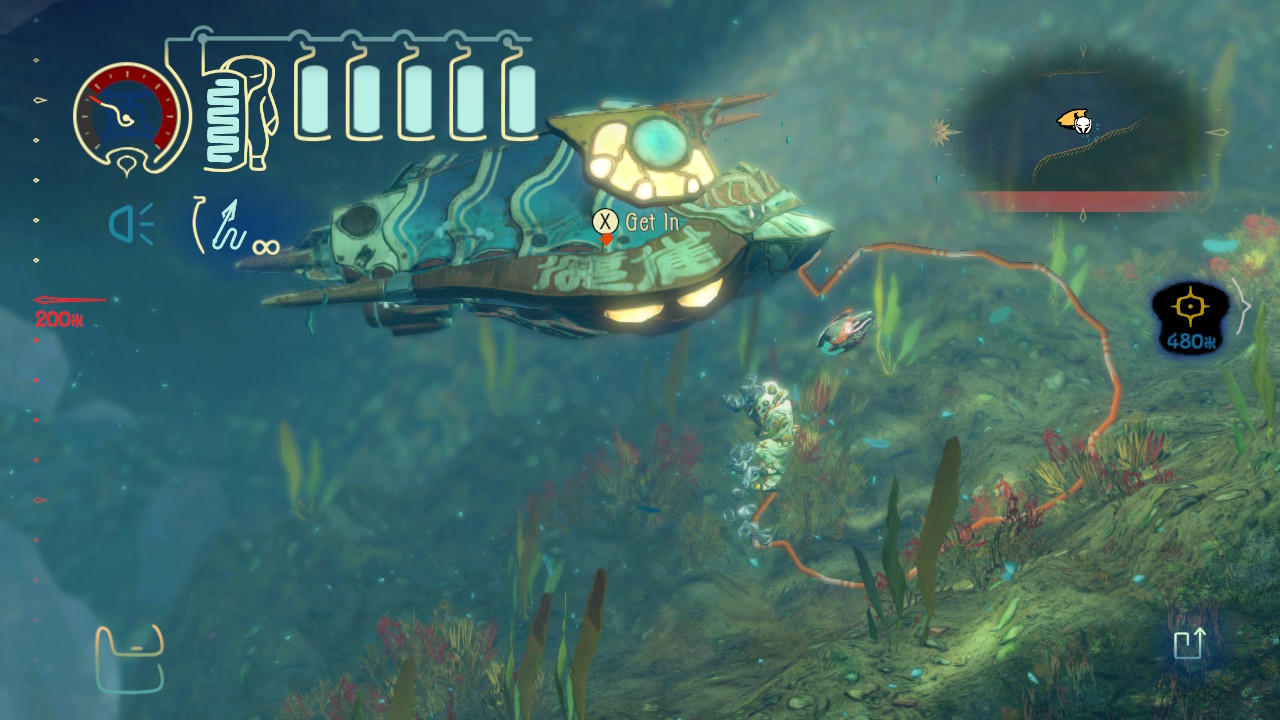 Shinsekai is a wonderful experience that really pushes the player to explore and discover what happened to humanity. Crafting an underwater game is no easy feat, as many games I have played that are underwater tend to have some sort of problem – usually controls – but there are no real issues to report here. The camera and controls are simple, but work well, and allow you to explore at your own pace, whether that is just checking off mineral locations on your map, or diving deep to tackle one of many engaging boss battles. While it seems many may have skipped this one on Apple Arcade, I am glad Shinsekai made the jump to Switch as the dive into the ocean depths it provides is definitely worth your time.