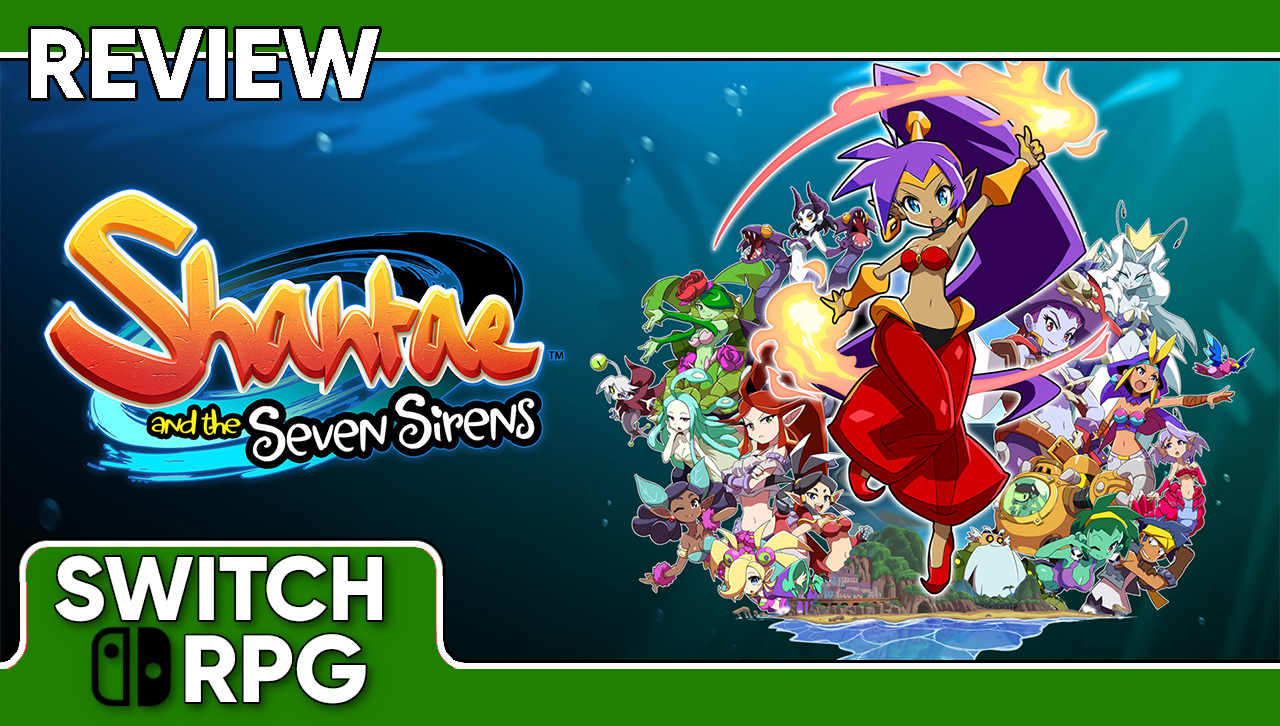 The Switch has become “the platform” for Metroidvanias and May was no different, with long-running series, Shantae, making her latest debut on the eShop on top of many other releases in the same subgenre vein. Similar to my last review of Shinsekai Into The Depths, here we have another Metroidvania that originally debuted on the Apple Arcade program before making its way over to Switch. This isn’t Shantae’s first foray on the Nintendo Switch platform, mind you, as Wayforward have ported several previous entries already. This latest installment, Shantae and the Seven Sirens, released on May 28th and wasn’t on my radar originally because of my somewhat disappointing experience with Half-Genie Hero previously. Rumors suggest that WayForward corrected some of the design choices from that version and have doubled down on the Metroidvania elements, so I ultimately decided to give it try.

Let’s see how Shantae’s latest hair-whipping adventure plays out, shall we? 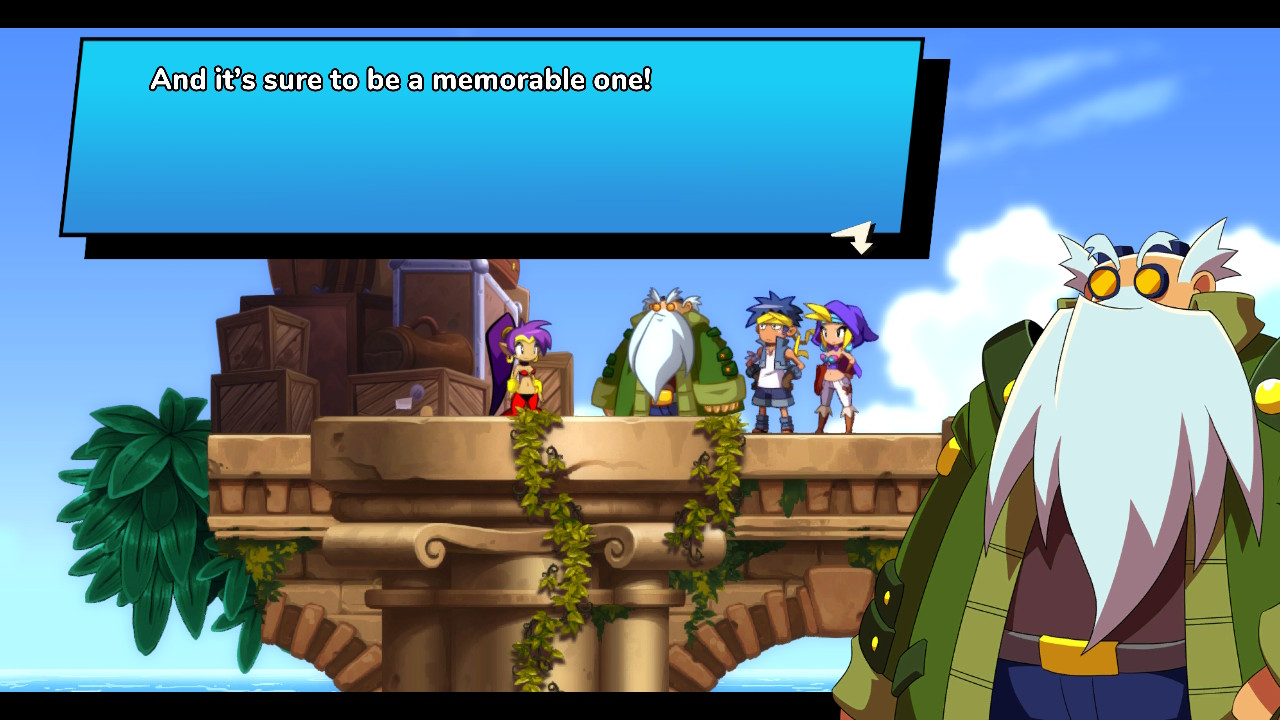 Shantae and the Seven Sirens finds our hero and her crew setting out on a much deserved vacation on a tropical island. A half-genie festival is being held on the island where Shantae and her friends meet up with other half-genies, but the festivities are unfortunately cut short. The mayor has put together a show to honor Shantae and the five other half-genies, but things go awry as the curtains are raised, leading the half-genies to be captured by a mysterious force — all except for Shantae. Now, the lone half-genie is left to uncover what is going on and rescue the other half-genies. As Shantae ventures out and begins to explore the depths of the island’s sunken city, she discovers that the disappearances are linked to the “Seven Sirens” that inhabit the depths of the island. 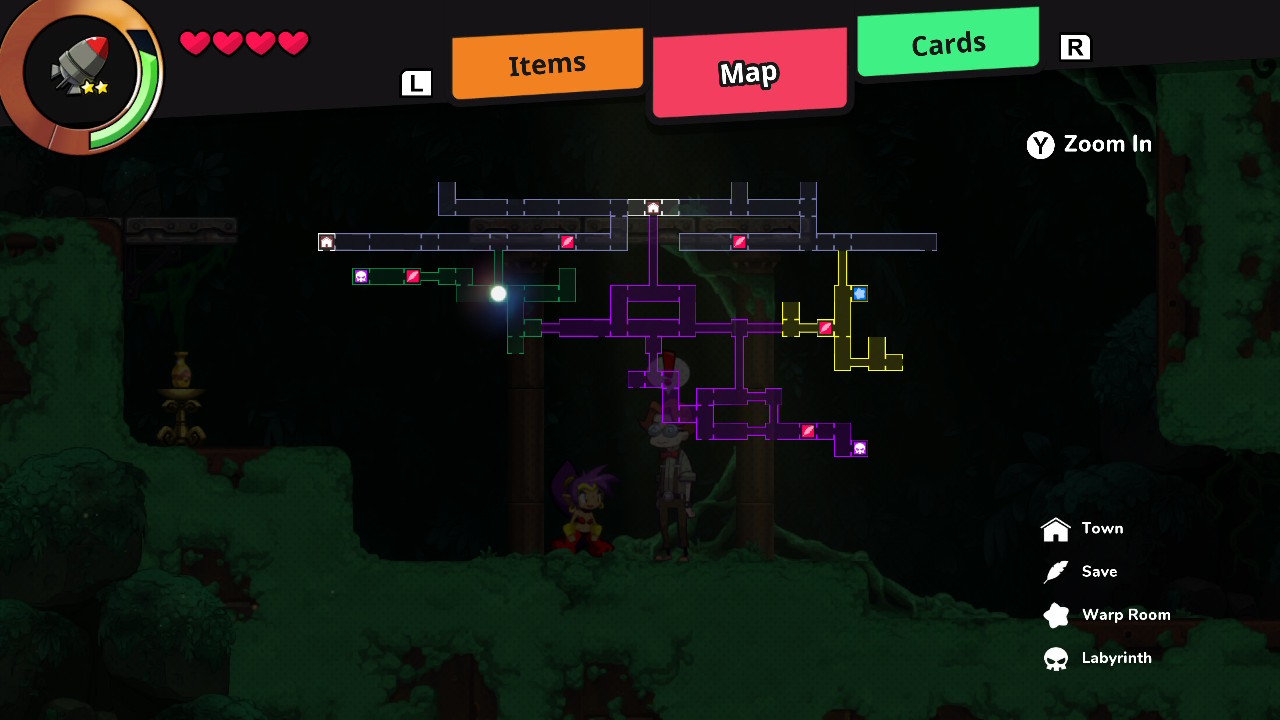 In true Metroidvania fashion, you start with a character with limited abilities and a map that slowly grows as you explore the area and further develop as a character. Shantae is still the belly dancing, hair-whipping, transforming half-genie fans have come to expect. As you traverse the island and unlock more of the map, Shantae will naturally gain more abilities in the form of transformations and fusion magic. One of the biggest changes from Half Genie Hero is the single, interconnected map, which you will be traversing and revisiting throughout the campaign. The game starts just outside the island’s main town with a conversation between Shantae’s family and friends that you will encounter along the adventure at various points. You will then enter the main town and central hub area from which you will venture off in all directions. As you progress through the story and begin to rescue the other half-genies, you will gain the ability to use their magic after bringing them the necessary fusion stone. These labyrinths act as dungeons with baddies to defeat, abilities to unlock, puzzles to solve, and more.

Shantae will, of course, also learn various dances and transformations. Dances in Seven Sirens have been streamlined into one-off spells; for example, one will grant you the ability to see hidden objects on the screen. Holding the dance button and pressing one of the four directional inputs will trigger the spell revealing any hidden objects on screen. Transformations utilize a similarly streamlined function; jumping into the air and pressing the correct button as Shantae descends will instantly change to the proper form and break the object. This concept applies to the all four transformations once unlocked, activating seamlessly as to not detract from the game’s pacing or immersion. 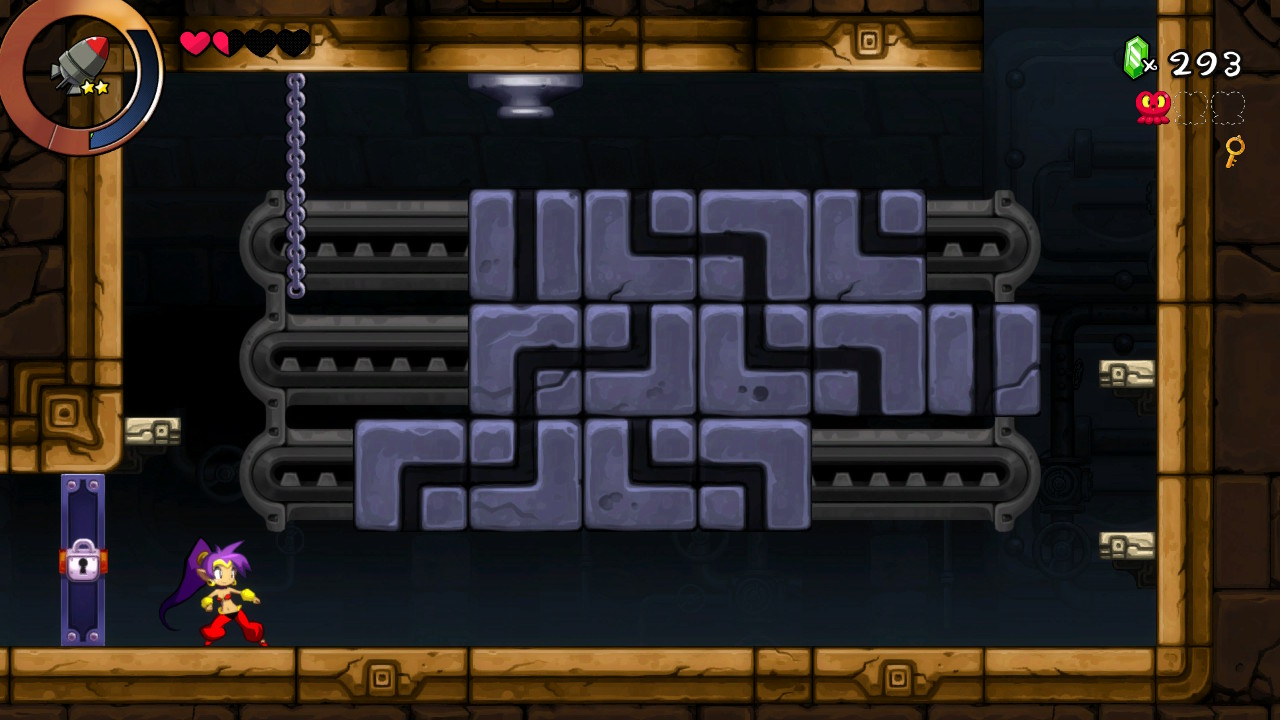 In addition to the dancing and transformation abilities, which are used to solve puzzles and defeat enemies, Seven Sirens features an item shop. Here, you can buy consumables such as potions, which can restore mana or health like other food consumables you can pick up from enemy drops. In addition to the consumables, you can purchase abilities and upgrades in the form of relics; some use mana, while others are passive upgrades to specific traits like hair-whipping speed and damage. Other relics that can be purchased, like various projectiles and shields, allow Shantae to use them at will granted she has the necessary mana beforehand. These items are all optional, however, and don’t need to be purchased or used to complete the story.

Seven Siren introduces a new mechanic in the form of a collectible card system. Some NPCs will trade you “rare” monster cards for golden nuggets while others are acquired through random enemy drops. These cards can then be used to augment Shantae’s abilities even further, like preventing spike damage and improving mana generation. There are several dozen cards to collect and some require you to retrieve a set amount before you gain access to the ability. Some of these can be very rewarding if you seek them out, but the player can only have three of them active at any given time. Fortunately, these powers are easily swappable from the menu. If card collecting isn’t enough, you can also search out all the golden nuggets and heart squids, both of which can be traded in for heart containers.

Seven Sirens is a bit low in difficulty, but there are plenty of save locations and fast travel points to be found throughout the map, making it a painless process to go back to previous locations. The map is a decent size, and you will be revisiting areas many times as you gain new abilities. The map reminded me a lot of Link’s Awakening in that regard – while not the largest of maps, it is dense and demands multiple visits in order to uncover everything. 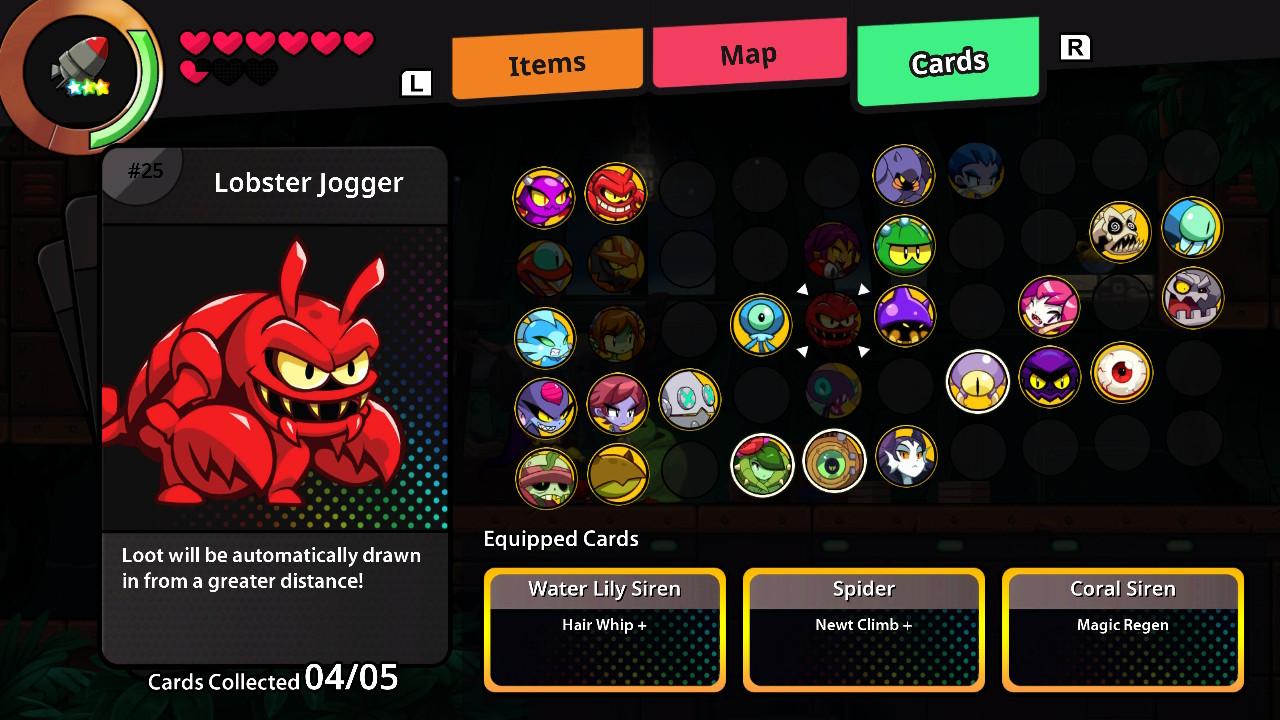 Upon startup, the player is treated to a well-produced animated opening cut-scene from the talented group at Studio Trigger. The visual and audio experience doesn’t end there, as the game looks and sounds great throughout. The game’s soundtrack is well done, combining a mix of 8-bit tracks with catchy pop tunes, some of which will stick with you even after you have put the game down. Seven Sirens opted for a 2D approach to the background, which looks and works well even in handheld mode. The game is very colorful, and the tunes and color palette adjust appropriately to each area. There is a bit of voice acting beyond the opening cinematics, too, which can be viewed here. Most cutscenes are fully voiced and animated well, so definitely play this one with the sound up. 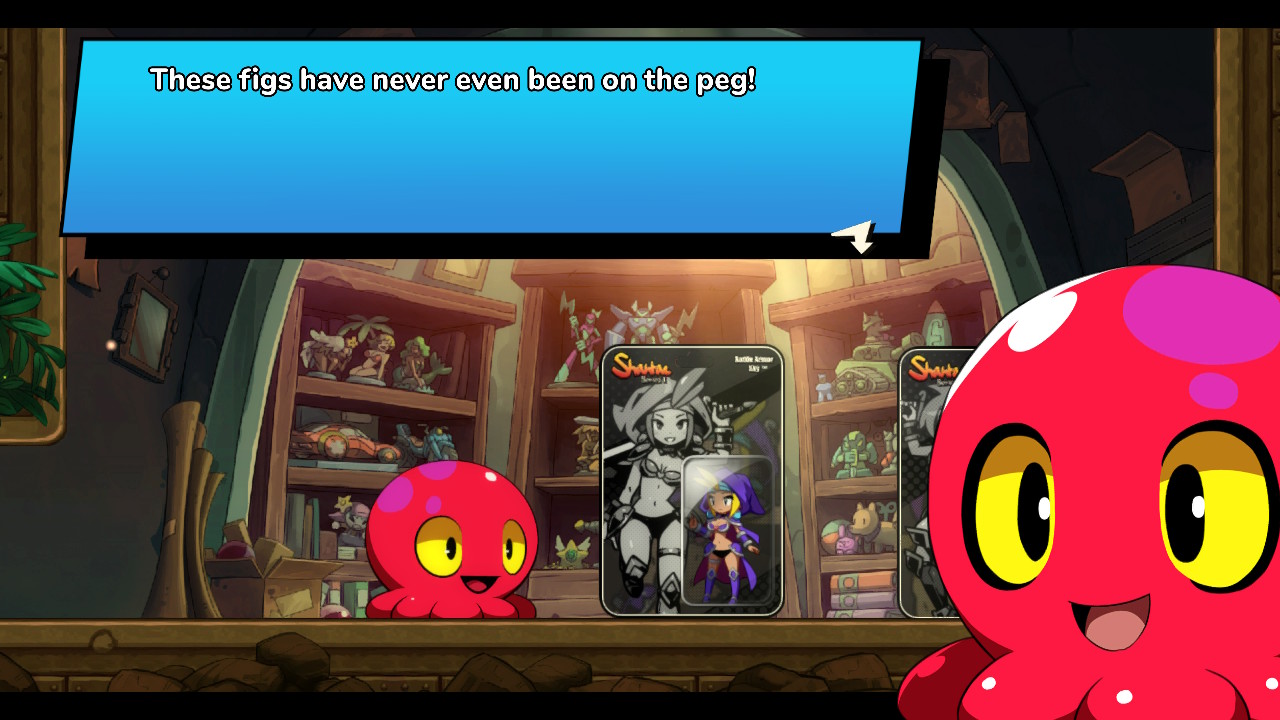 Shantae and the Seven Sirens was a joy to play. While the experience isn’t that long – I was able to complete the main campaign in about 6-7 hours – the lack of padding also means that it doesn’t overstay its welcome. The lack of difficulty certainly appeals to a more casual audience, but there is plenty to do in regard to collecting and exploration even after the credits roll. Additionally, a new game+ option and speed runs become available after completing the game. While I haven’t played every Shantae game available, and Half-Genie Hero wasn’t really my thing, Seven Sirens captures most of what I look for in a Metroidvania experience. While the story of Seven Sirens isn’t anything special – the plot can be very predictable, at times – the gameplay really shines.

The excellent visuals and sound design fans have been accustomed to from the series are present throughout, and I really enjoyed the transition to the interconnected map, the latter of which I would like to see WayForward do more with in the future. A mini-map option and the ability to track collectibles or add waypoints would be welcome improvements, for example. Seven Sirens shows that WayForward has listened and learned from their past entries and really tuned the game’s formula to make for an enjoyable experience. The changes to the map and world design, paired with tight controls, excellent voice acting, and solid writing make this one an easy recommendation for fans of the series and Metroidvania enthusiasts alike.