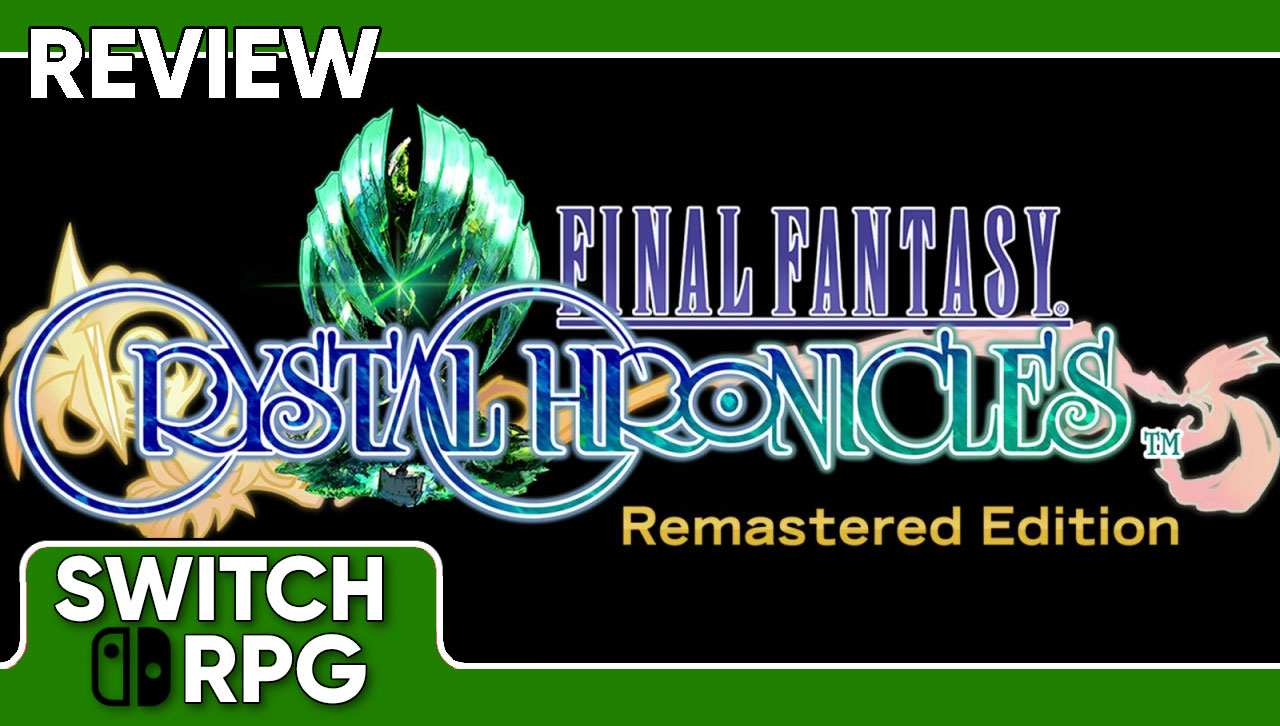 It’s been sixteen years since Final Fantasy Crystal Chronicles released on the GameCube. Notorious for it’s inaccessible design, the game was in some ways ahead of its time, asking players to utilize multiple screens for inventory management, cartography, and of course, a hefty price commitment. For the rare few who did have the hardware and the friends, Crystal Chronicles was pure dungeon-crawling bliss- slightly competitive, always hectic, and benefitting most from a party larger than one. To the masses, however, this title went largely unnoticed, mainly because of its niche genre and the frustrating amount of hardware required for access. In an age where old is new and online gaming is the best way to bridge gaps between players, does this GameCube classic stand the test of time? The answer is “yes,” though not without some reservations.

Crystal Chronicles is a dungeon crawler with an emphasis on gear and material grind across its thirteen main-game destinations, which increase in intensity as the player completes them through specific “cycles.” You’ll start by choosing from one of four races, each with their own unique weaponry and gear that further suits them for a specific party role, though any can excel with the game’s tools, and should largely be chosen based on your favorite weapon type. As a member of a Crystal Caravan, you set out from your hometown in the hopes of collecting Myrrh from springs scattered throughout the land, nestled deep in dungeons. If you successfully fight your way through a dungeon and defeat its boss, you’ll collect one quarter of a Chalice of Myrrh, and completing four dungeons ends your year-long quest. Myrrh springs only revive after a year break, so you can’t just grind the same four dungeons every year, and will be forced to push further from home in order to obtain this vital resource.

You’ll spend the majority of your time in dungeons, where you’ll start by picking your loadout before setting off. This phase is a bit bland at first, but it becomes a bit more complex as you progress further into the game. Essentially, you’ll always start with equipped “attack” and “defend” options, and you’ll have a limited set of slots left for any particular healing items. You’ll want to keep these open, however, as just about every single felled enemy in Crystal Chronicles will offer a reward in some sense- most often, these come in the form of consumable healing items, but you’ll also nab some precious equippable spells, and an occasional artifact, which come into play at the end of the dungeon. Over the course of a dungeon, you’ll get the tools to become a self-sufficient explorer- magic of all elements, and healing variations, as well, which you’ll rely on more for staying alive than your consumables. 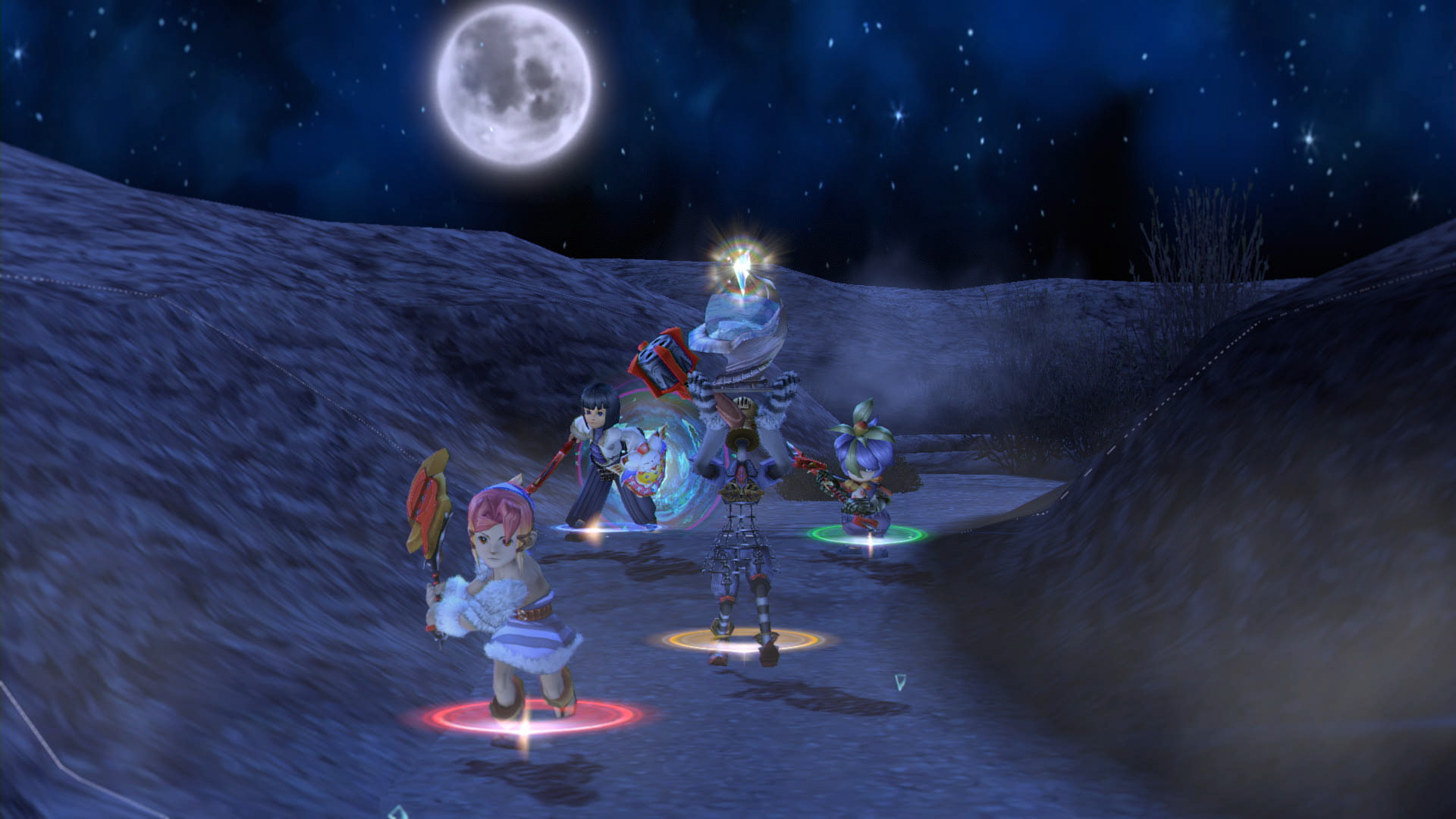 Dungeons sometimes possess light environmental puzzles, which are often straightforward, but there are some late-game areas where co-operation will make exploration much easier. If you ever feel like there’s an area you just can’t reach, don’t worry- the game will gradually expand dungeons as you complete their respective cycles, and certain yearly triggers will open up new paths for discovery. Each environment culminates in a massive boss encounter, which will often spawn smaller enemies that need to be taken down before focusing on the larger threat. Upon completion, a mail-moogle will offer you an opportunity to connect with your family, or some other characters you’ve encountered along your journey. The game then tallies your “score” and offers you a chance to select one of the many artifacts you’ve collected.

I should explain- in single-player, your “score” will matter little, but is always tied to a secondary objective. These can range from “taking magic damage” to “collecting gold,” but their real purpose lies in multiplayer. Since artifact accrual is shared by the whole party, you’ll want to raise your score as high as possible in order to get first pick from the lot. This adds a slight and silly competitive edge to the game, but considering there are some artifacts that will drastically boost stats, open new command slots (allowing access to more abilities), and eventually offer some precious materials, it can sometimes be a bummer to get stuck with a secondary goal that will put you at odds with your teammates. This is counter-balanced by the chaotic nature of multiplayer, and the fact that you can hold your party members hostage with certain items and privileges is a nice counter-balance.

The other portion of gameplay is spent exploring the map, visiting towns, and occasionally triggering a crossroads-style cutscene. These range from nonsensical explorations of bit characters, to actually-crucial story morsels that will pepper your experience. You can review these encounters in your journal, but the addition of voice acting brings even more charm to these sequences. There are a few, sparing towns featured in the world of Crystal Chronicles, where you’ll be able to craft new weapons and armor and hear more about the lore of the world.

What sets Crystal Chronicles apart from most of its Final Fantasy ancestry is its unique art and sound stylings, meant to evoke a fairy tale feeling with their simple, rustic nature. Though many of the game’s textures have been upgraded for the remaster, they’re all still wrapped around the models of the GameCube original, so you won’t be looking at anything breathtaking. Similarly, the lighting and particle effects, while impressive and suited for the art design, aren’t sophisticated or touched up with modern technology. In many ways, Crystal Chronicles is simple, but this isn’t a strike against the title. Enemies are easily recognizable and environments possess a great deal of variety, even just within each dungeon itself. Rivers, bridges, derelict towns, and secluded caves are just some of the novel areas you’ll explore, but many feature individual “acts” that communicate a unique theme.

What sells so much of the Crystal Chronicles experience is its excellent sound design and voice work. The entrance to a dungeon is always accompanied by a stunning and evocative introduction from a female narrator, and it manages to color the experience with a cozy, yet mysterious vibe. This narration is the soul of Crystal Chronicles, and manages to tell stories powerful enough to capture the imagination in a game where dialogue is elsewhere sparse. As stated prior, the game’s narrative is trickled out across years of exploration and encounters, so you’ll need to pay close attention to what is going on, but there are some subtle and beautifully told moments here, all revolving around the nature of the game’s namesake. 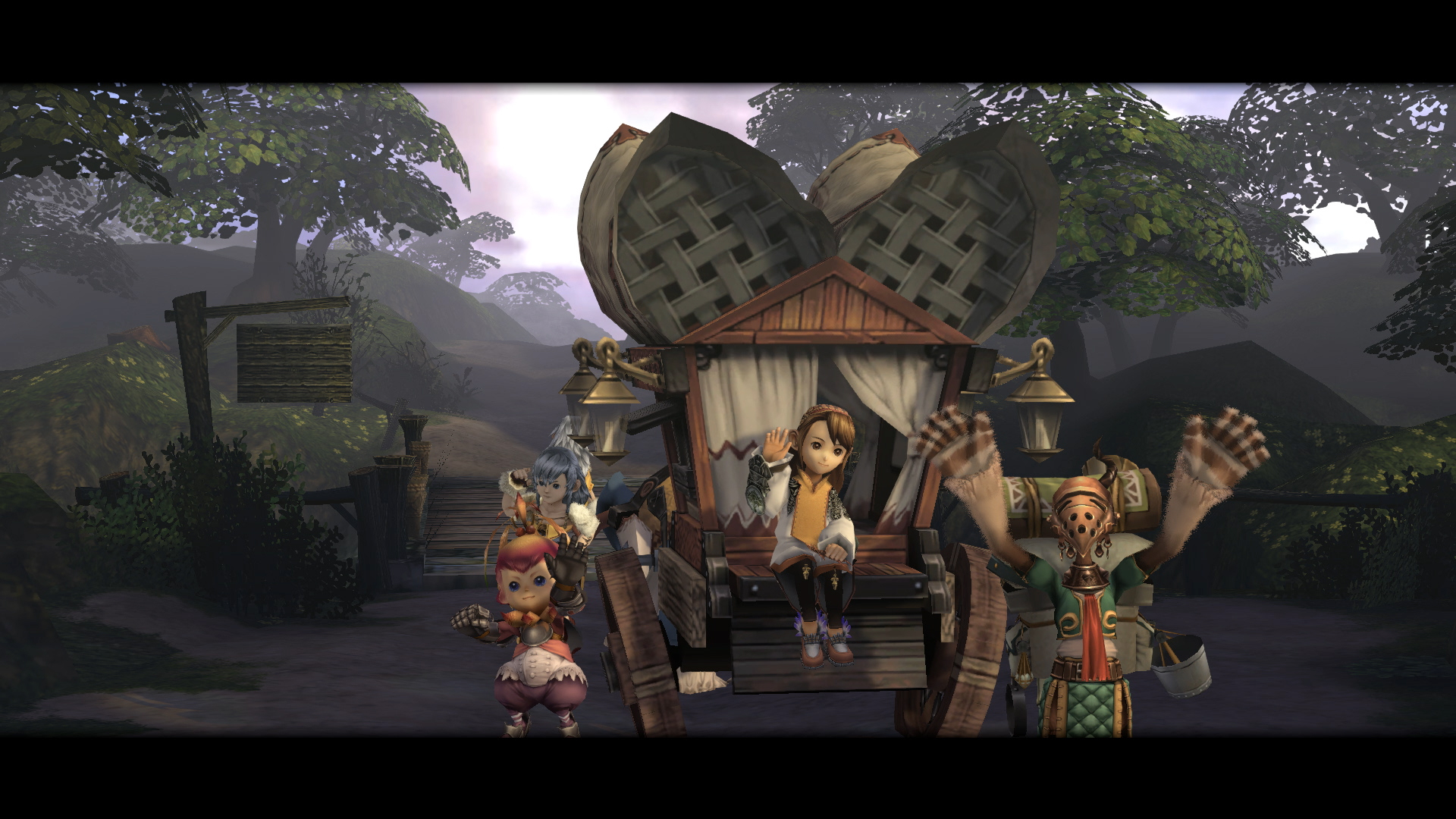 While the soundtrack by Kumi Tanioka is nothing short of inspired, drawing upon celtic instrumentation to further sell the fairy tale theming, there are a few tracks here and there that are a bit too repetitive for their own good. On the whole, Square Enix has done an excellent job revisiting and revamping these tracks so that they sound just as good as ever in the remaster, with the vocal tracks also getting updates that honestly sell the atmosphere better than the originals, the more mature vocals and in-game narration from Donna Burke enhancing the aura of mystery.

There are still some silly looking environmental features to be seen here, such as fields of wheat that are one giant polygonal lump, and occasionally nondescript enemy designs. Similarly, some textures are a bit too washed out to spot and interact with, such as the moogle fur and its accompanying styling game. Even so, the aesthetics of Crystal Chronicles are iconic enough to remain golden, thankfully coming from an era where the quality of animation was high enough to sell the unique designs on display.

The core of Crystal Chronicles’ gameplay and aesthetics is solid, so what could possibly be left, other than to give the game a wholehearted recommendation? Well, there are a few puzzling aspects of this remaster that negatively impact the nature of adventuring, which are important to mention. First, the game’s matchmaking system is tied to the Caravan leader, which makes sense from a hosting standpoint, but means that progress for any accompanying members comes only in the form of loot. If you’re truly committed to sticking with a specific group of adventurers throughout your entire experience with this remaster, you might not find this to be a problem. However, if you plan on playing with different groups or hosting a caravan yourself, you might want to sink some time into your campaign a bit.

The new timer system for magicite rings (necessary in multiplayer in order to cast more powerful spells) seems more like a sidestep to account for lag than an improvement, unlike the single-player magicite-fusing system. The game does feel tailored towards online play a bit more, with its in-game chat system providing the rudimentary means of communication required to direct tasks and its melee combo system extremely commital and based on input rhythm rather than hit detection. Likewise, the sometimes-easy main campaign is now further enhanced by more difficult post-game content, meant to truly test the adventurers and their preparations with more intense challenges that make gear and loot grinding a necessity rather than a secondary occurrence. 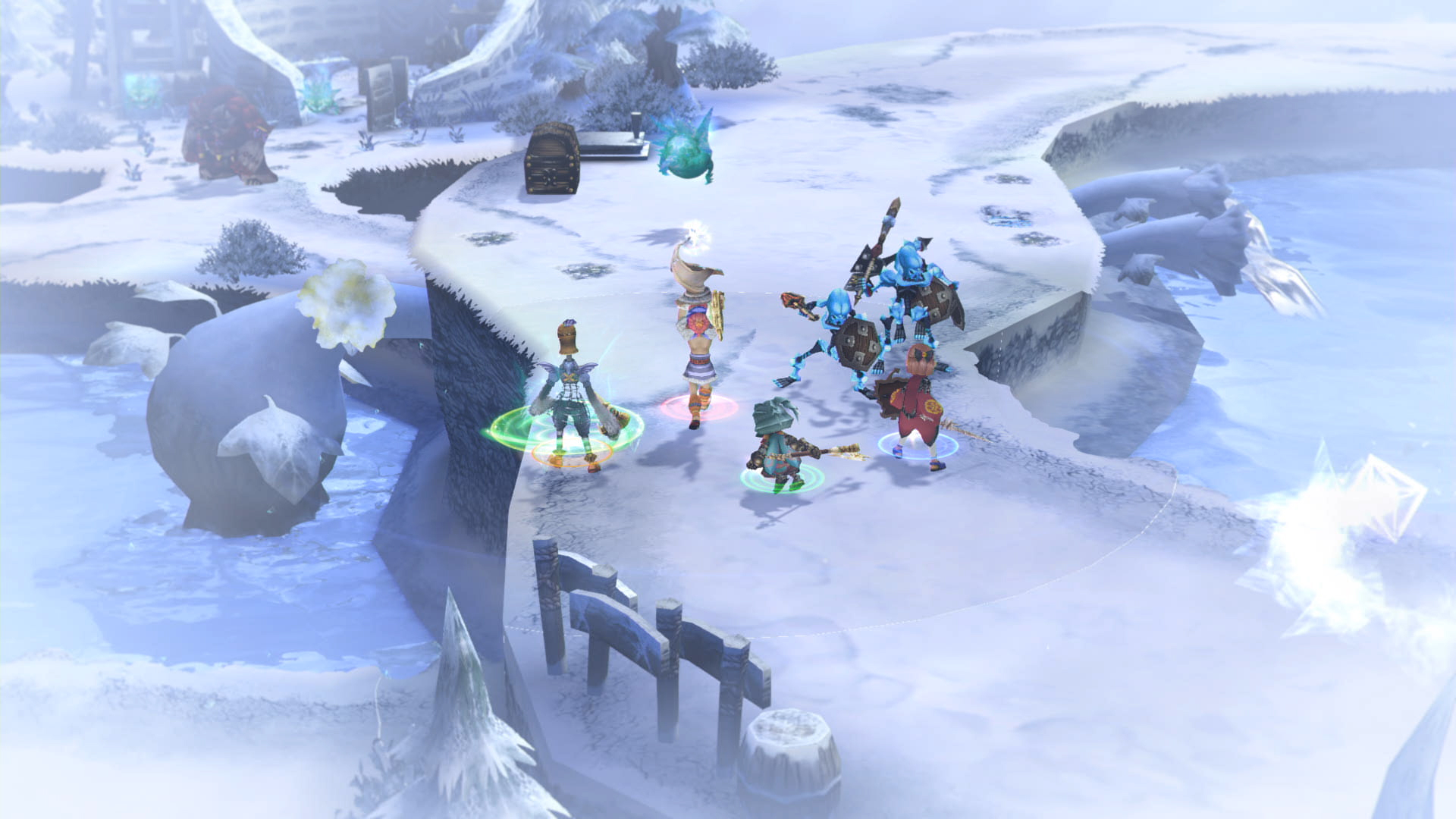 Crystal Chronicles is a game that demands to be played in groups, however, and the lack of local multiplayer truly feels like a missed opportunity. Single player is a lonely experience that solves some of the issues of the multiplayer experience- such as playing “who gets to carry the Chalice-” but it lacks the adventurous spirit the game so strongly balances itself upon. Having a friend in the room to play alongside brings out the most rewarding part of the gameplay, but that being said, this remaster does deliver the experience of the original while presenting an all-new challenge for seasoned veterans. Though its online-only approach is certainly a bummer, the game delivers a dungeon crawl that is charming to its core, and now features more content than ever for fans and newcomers alike.