To the Moon Review (Switch) 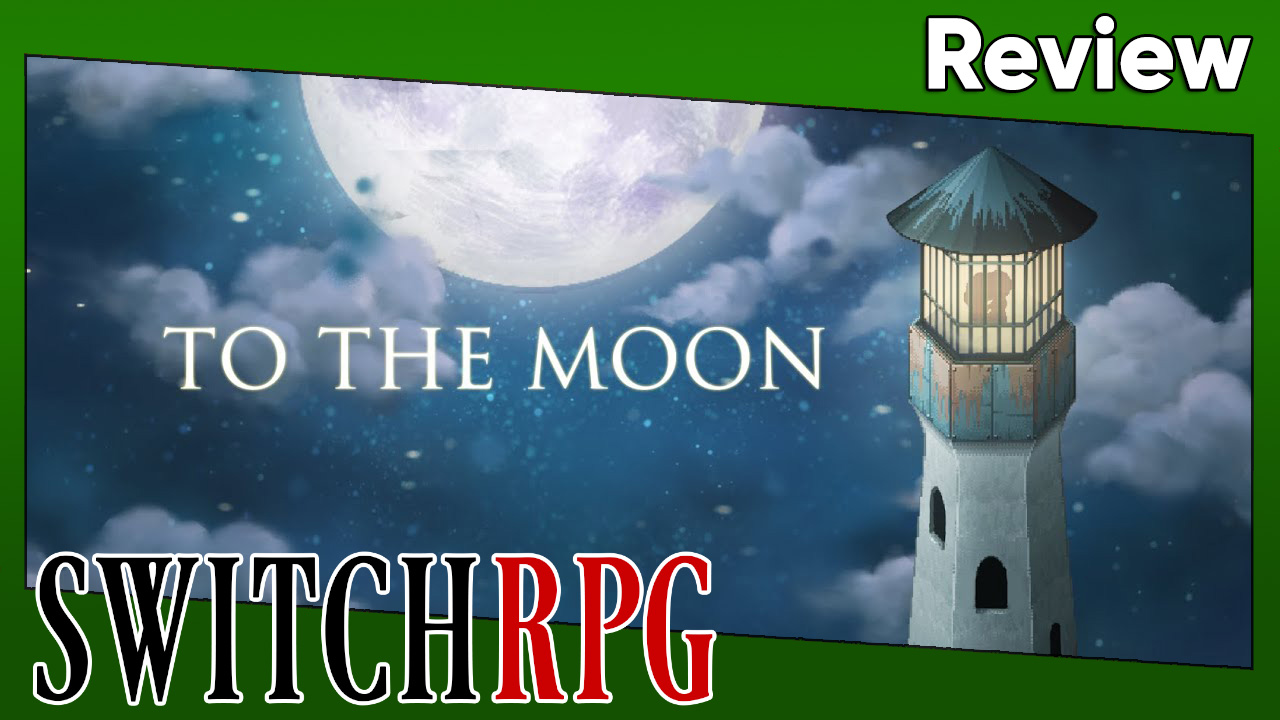 If not for the focus on story and character in the RPG genre, I may not have become so interested in video games. I’ve always loved engaging in narratives, whether that be through novels, movies, plays, television or video games. I’m particularly drawn to games with strong character writing, which is why I’ve enjoyed Final Fantasy and classic BioWare titles in the past.

Over the years I’ve often searched for more games with a great focus on story content, and while I’d heard of To the Moon (Freebird Games), I had never really played it. I had only attempted a bit of a demo on the PC, years ago, and had never actually purchased the full game. I finished the Nintendo Switch port recently, and now I’m struggling to find a way to express my opinions on this game. However, as The Oracle tells Neo in The Matrix (a movie this game references at one point), it’s probable that, “you already know what I’m going to tell you”:

To the Moon is one of the best video games I’ve ever come across. 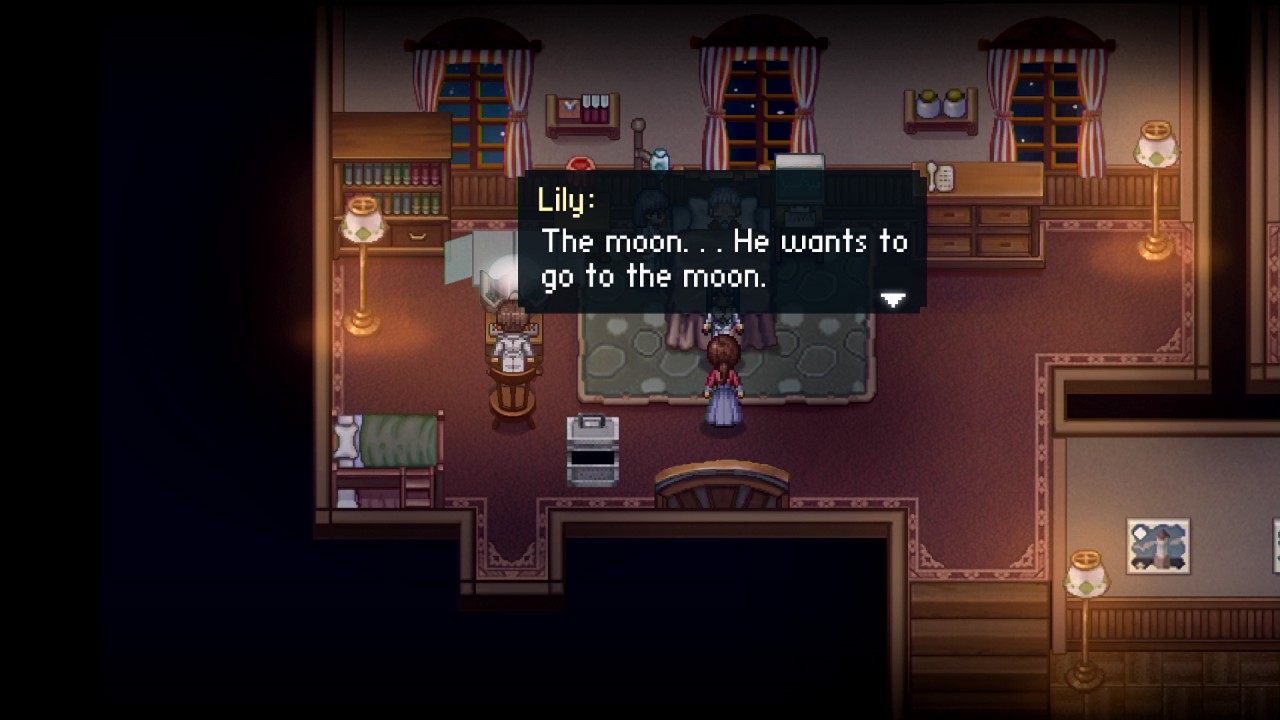 The story is split into “acts,” which compliments the game’s impression akin to an intimate play. There are two playable characters: Dr. Eva Rosalene and Dr. Neil Watts, from the Sigmund Corporation. This corporation employs a science fiction technology that allows them to actually view a person’s memory and alter details to suit the requests of their client. The other two characters are Johnny Wyles (the dying client) and River Wyles, who is only seen through memory sequences. There are other significant characters, but these four get the most attention.

I’ll be frank — at first, Neil Watts was incredibly irritating. I found him bizarrely unprofessional, disrespectful, and simply obnoxious as he made constant jokes while in his dying client’s house. Near the end of the game, however, he started to grow on me as he showed a different, compassionate side, and eventually I somehow found myself actually liking him- I also appreciated his references to Street Fighter and so on. Eva, his partner in this job, is far more likeable and remains so for the majority of the game, despite a surprising moment near the end that left me conflicted. Give both characters time, and they will surprise you in different ways. 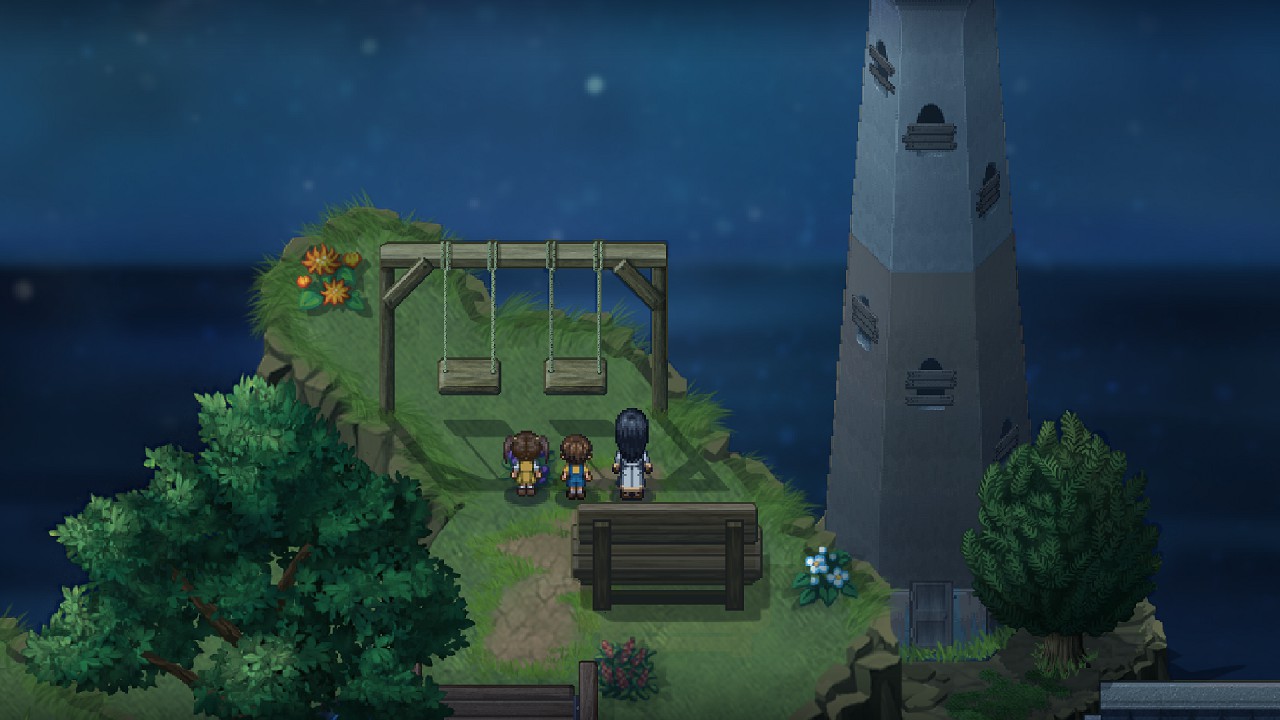 Johnny is an interesting example of brave writing, in that the character is sympathetic while showing flawed, unsettling behavior, mainly in a flashback scene that elaborates upon his attraction to River. River is also interesting, especially in how she is linked to isolation and loneliness. As someone who is highly introverted, and has been for years, I felt like I could relate to at least some of how she and Johnny were depicted during the flashback moments.

The dialogue between these main characters, and all the dialogue in the game, is surprisingly well-executed, with a natural and believable style, which is another reason why the narrative felt so much like a stage production (and presumably why there is an upcoming movie adaptation.) The plot did have moments that left me puzzled (I’m still not entirely clear on the exact way the technology here works), but it is mainly just as accomplished, with powerful use of foreshadowing.

The game also succeeds in regards to the visuals and music, with Kan Gao and Laura Shigihara offering an impressive soundtrack. The main theme, “For River” and/or “To The Moon,” (as it is referred to in the game) is a lovely piece in itself, but there was also another track that evoked a real sense of dread when I heard it play, named “Lament of a Stranger” — it reminded me somewhat of Yasunori Mitsuda’s work on Chrono Trigger. “Having Lived” is also a gorgeous melody, and “Uncharted Realms” has a sinister, tense feel.

Even the sound effects are notable; I particularly like the way you can hear wind and water outside when you’re in Johnny’s house at the start of the game. There is also the way you can stop at the top of the staircase and hear other characters playing the piano downstairs, which is promptly cut off when you enter Johnny’s room. Details like these are what helped to make me feel immersed in the game world. 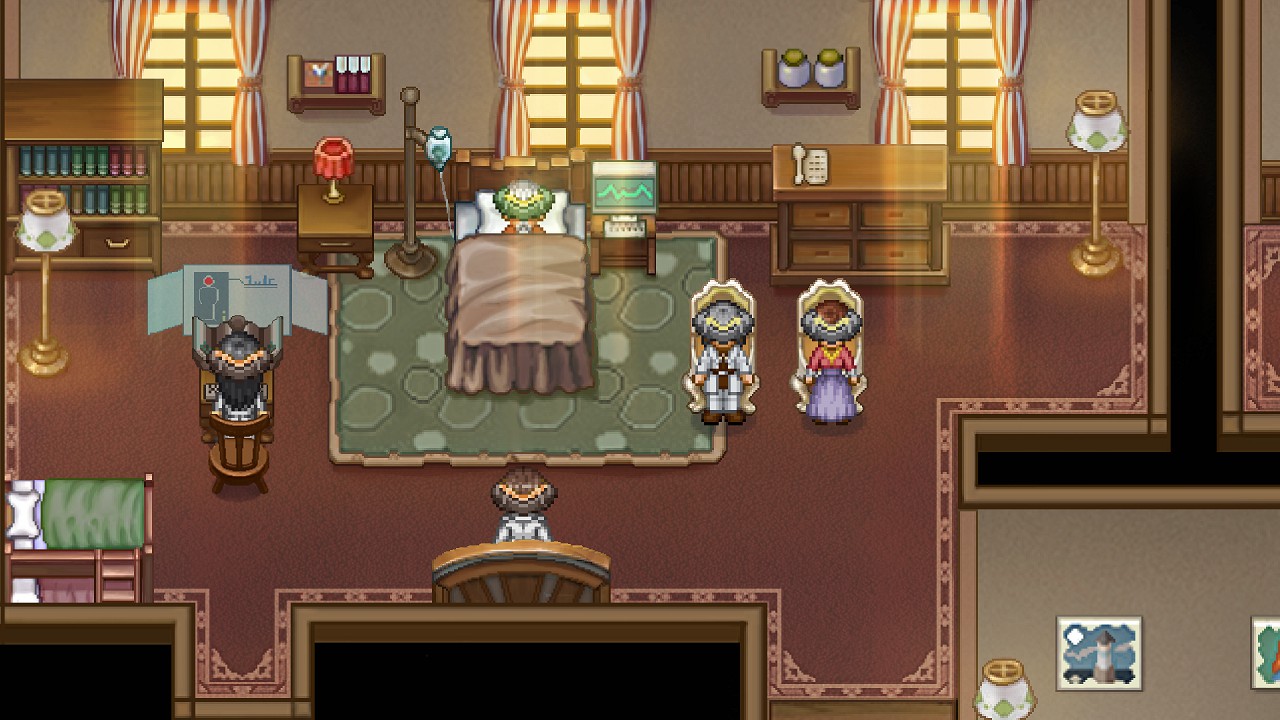 The visuals are similarly refined. I was startled during one scene where the depiction of early morning (as Neil and Eva discussed their job in a room) reminded me of how it felt to be awake at that time during the weekend when I was a child. The interior of Johnny’s house felt very cozy to me, and I also enjoyed the way certain rooms in the house are dark until you switch the lamps on. The visuals aren’t beautiful in the typical sense, but they really do serve to create a powerful atmosphere.

The gameplay revolves around walking about, interacting with people and items, sometimes selecting dialogue options, and completing small picture games. You move around using the analog stick or the directional buttons (although my own Hori D-Pad seemed to act oddly when I tried to use it here, so I stuck with the analog stick). You can bring up a type of journal if you press the + button, which offers you helpful notes.

Whether this is or isn’t an RPG is up for debate. My colleagues and I discussed the issue, and some of them believe it shouldn’t be classified in this genre, due to the gameplay mechanics in comparison to what is normally seen in these types of games. I’ll just say that the developer labels it as being under the role playing genre (among others).

I know that this sort of gameplay isn’t really to the taste of everyone, but in my case I found it perfectly acceptable. Aside from my issue with the directional buttons, I had no problems with bugs, barring a crash just after the credits ended, not something that mattered to me at that point.

To the Moon is a wonderful game. The story is superb, and the music and visuals are also great. If you’re interested in character-driven storytelling in the video game medium, this game should be one of the top titles on your wishlist. It’s the kind of work that reinforces how good the medium can be at its peak, at least in regards to narrative.