You’re an unknown adventurer that was deposited on the steps to the Kingdom of Tutti Frutti and left for dead. You need to be cared for by the locals for a day or two before you’re back on your feet, but that doesn’t stop you from wondering where (or even who) you were. Before long, you’re sucked into dangerous errands for the selfish young Princess and put onto the battlefield, risking life and limb for shiny baubles and disgusting vanity products, all the while trying to keep your mind off your amnesia and gain your bearings as an adventurer.

The story here starts off light and fun — nothing really matters too much at first, and that’s a good thing! The player has plenty of time to learn about the world and make friends with the locals, learning to utilize the tools and skills at their disposal to make a living in a land of loot and vicious monsters.

All happy things must come to an end though, and so as not to spoil it for you, I will say that you do eventually encounter events and people that cause you to remember where you are from as well as how you landed in your current predicament. Oh, and you do get the chance to seek revenge not only for yourself, but for the slow and steady destruction of the world wrought by the person that left you for dead. It’s incredibly satisfying.

As in most RPGs, Snack World has a level up where, after exceeding an EXP threshold, your player character will see an incremental increase in their stats, as well as gaining a Life Point per-level. Life points can be spent on various upgrades, the likes of which can increase elemental resistances, strength, magic, and defenses. These upgrades can also affect the drop rates of items and money in the game.

Snack World’s combat is not unlike the button mashing and charge attacks that players of the Final Fantasy Crystal Chronicles series would be used to. Quick combos for weapons with minimal charge attacks are the meat and potatoes of your experience. A Monster Hunter trait or two, like the dodge mechanic and use of battle items like HP-restoring Tonics and stat-boosting Colognes, give a more fleshed-out system that doesn’t feel cumbersome or too involved overall. 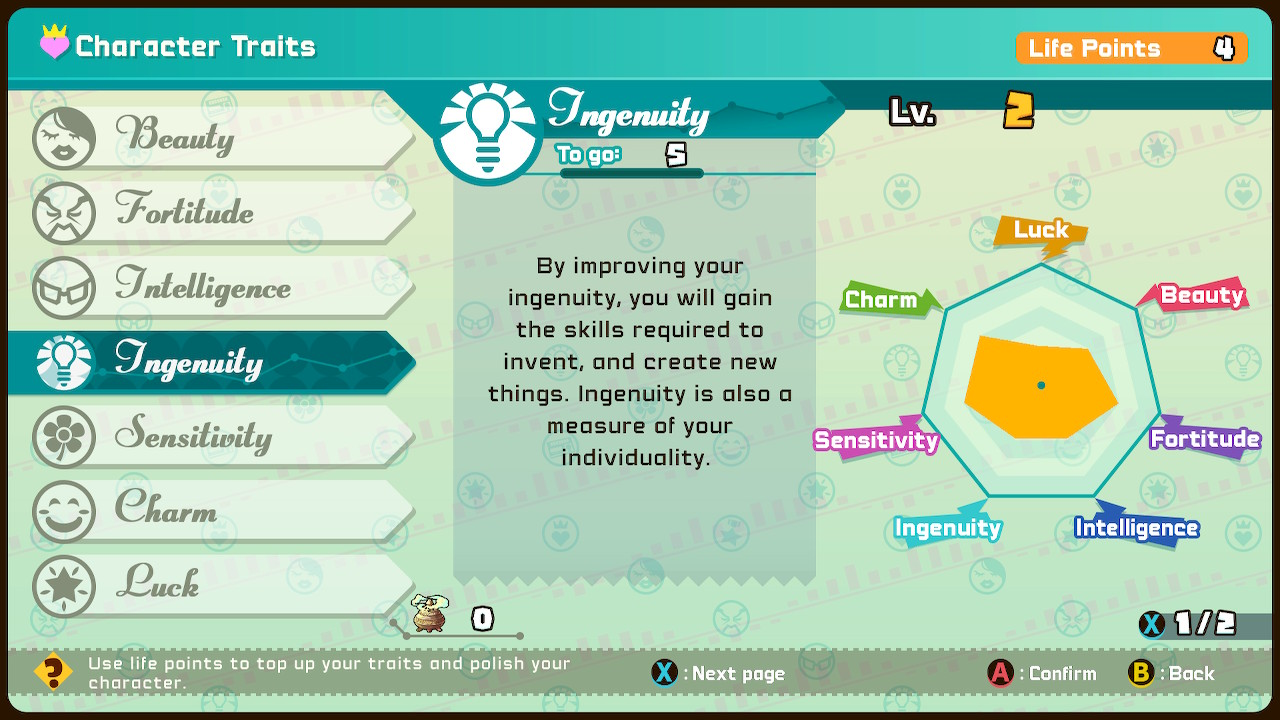 This is one of the ways to customize your character build, by allocating stat points to different categories you can grant bonuses and drop increases.

The most complicated aspect of the game involves equipment. Weapons, armor, and accessories are all able to be equipped by your player character, and each of them has different combat stats that can change how you do battle. Weapons can have abilities attached to them that make them more effective against different colors or types of enemies, each of these effects can have varying levels of intensity. Armor and Accessories can boost defensive properties and increase the drop rate of rare items.

Grinding for drops is the central facet of Snack World’s gameplay. While armor can be created by the player, accessories and weapons are usually found in chests or as end-of-quest rewards rather than simply being purchased from shops. These items can have random effects on them, meaning that one drop of the same item could be far better than another, depending on the boons and skills attached to it.

Most equipment items can be further refined with enhancements and color changes through an upgrade system, allowing you to increase the effectiveness of defensive items or add different colors to weapons and armor. Tonics and Colognes can also be upgraded, increasing their effectiveness overall and making them more useful to the player. 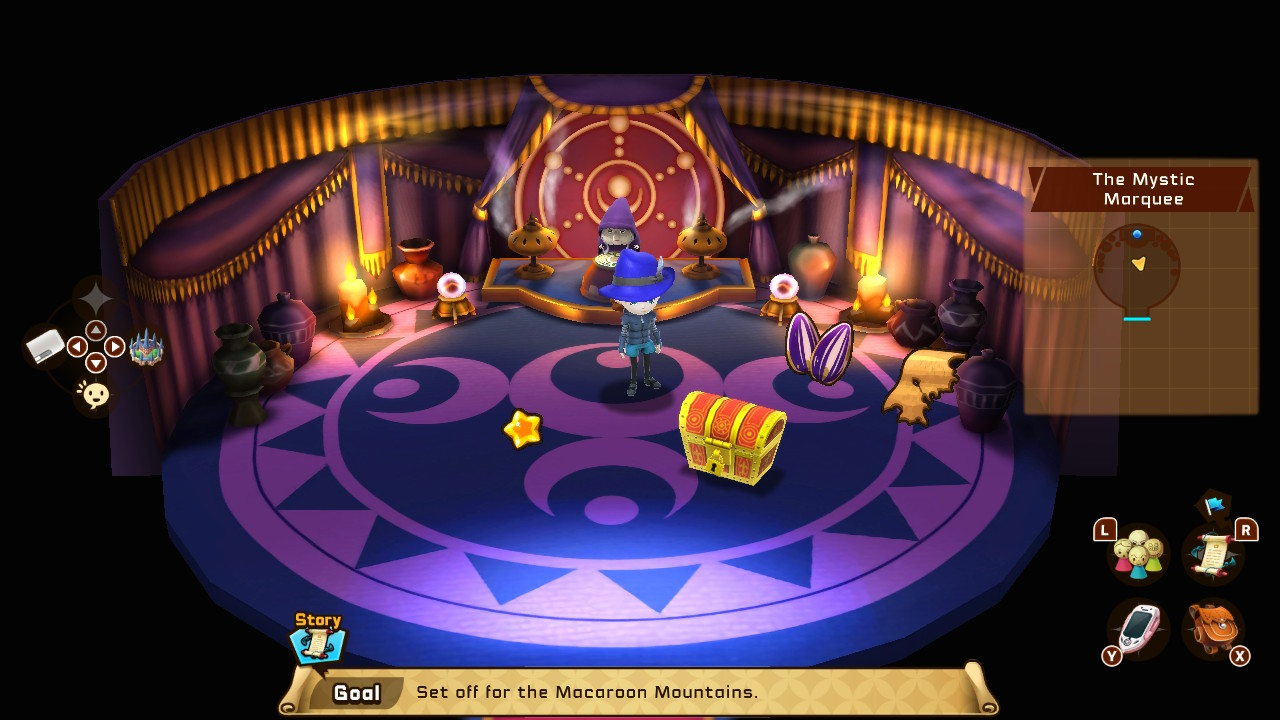 A daily dose of items that became more useful later on. I urge you to start collecting from the Witch ASAP.

While the single-player story is enough to warrant dozens of hours of gameplay, Snack World also has a large catalog of multiplayer quests. Players can organize groups of up to four players to take on slaying and exploration quests in order to collect drops together and take on tougher bosses. These quests are unlocked a handful at a time as the player progresses through the main story, and a fair few of them have the possibility of dropping loot that would be harder to get in other circumstances.

The endgame content that Snack World has is a huge undertaking in itself. The game opens up a swath of content that was released in the Japanese version as various DLC packs. These quests range from fun and engaging to brutal boss fights, but for those who, like myself, are motivated by the finer things in life (i.e., sweet, glorious equipment,) they’ll find a wonderful assortment of challenges awaiting them with a merciless grind that players of Monster Hunter or Mystery Dungeon titles should be familiar with. 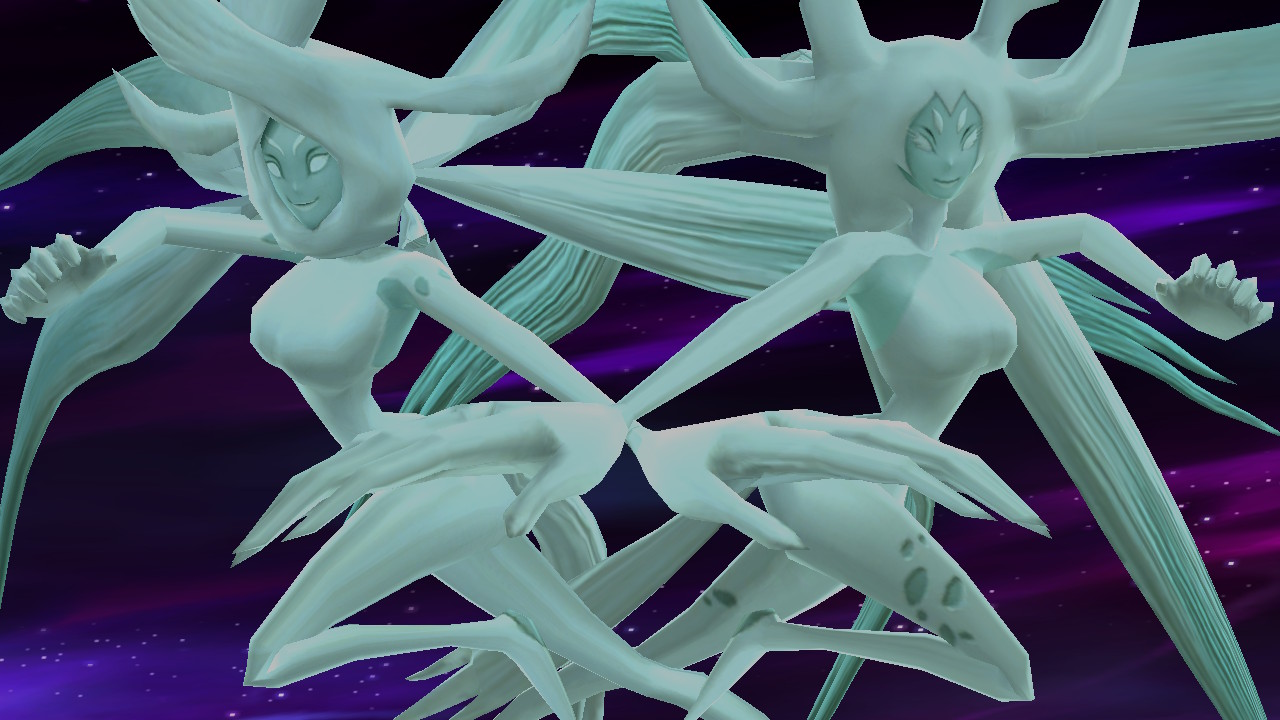 One of the first challenging boss fights I experienced had me clamoring for more tough story battles.

Snack World has a couple of main town hubs, each functioning as an area where the player can shop and pursue new quests and progress the story. Quests send the player out to different areas of the main world, where the map may be a sandy windswept desert, or a vast green plain with grassy fields and tall trees. Each of these areas has different enemies and different drops, so it pays to explore every corner of a map or dungeon to open every chest and fight every enemy.

Enemies themselves are usually cute and cartoony creatures that, upon defeat, have a chance to join you if you successfully complete a small minigame. This system is not unlike that of Dragon Quest’s Monsters series, where some enemies could join the player at the end of a battle. Befriended monsters or human companions in this title are called “Snacks,” and you can bring a limited number of them along on quests with you to aid you in your adventures. 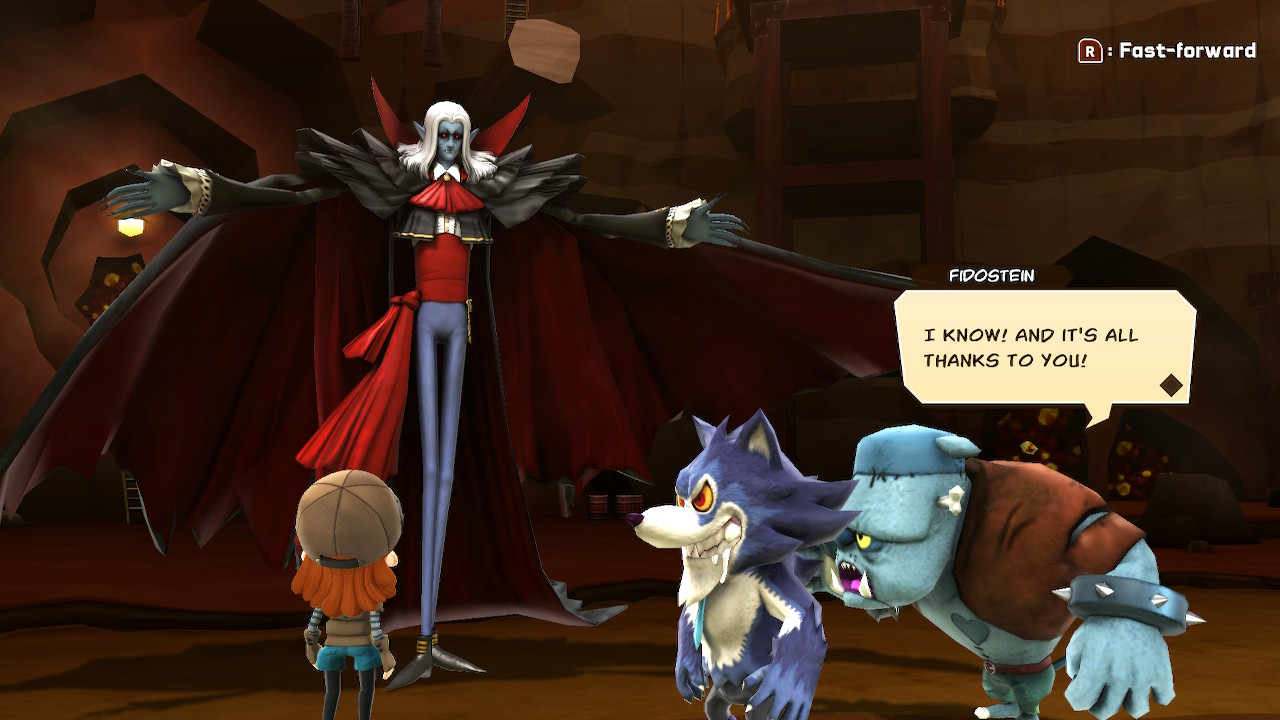 Similar to but legally distinct from Alucard, our friend whom we lovingly call Pie-pie is a vampire that helps us later on in our quest.

Snacks have assorted types and a myriad of skills, so you can cultivate a team that lends itself to your play style. Support-type Snacks can have healing and buffing abilties, while other Snacks can act more defensive or be vicious attackers. Balancing which Snacks to bring with you on what mission becomes a lot of fun, and while your party size is limited to a total of three Snacks, you can eventually bring even more friends with you in the form of “Pocket Snacks,” which you can use as short-duration abilities that act like a smaller scale, Final Fantasy-style summon.

Snack World is a lighthearted adventure that, while self-aware, doesn’t lose sight of the end goal of gaming: to enjoy yourself and have fun. If bashing in the face of the same boss over and over in pursuit of a single item drop is something that you enjoy, then I would say this isn’t a game to miss out on. With a long, single-player story and a large catalog of multiplayer and end-game quests, Snack World has a massive amount of content to satisfy any dungeon crawling fan.

I would pick the game up for what I anticipated would be a short play session, but would be surprised when two or three hours had gone by during my merciless slaughter of monsters in pursuit of rare Miracle Rewards, or the slow progression of the main scenario during gathering sessions for new armor or helms. The feel of Snack World is one of whimsy and excitement, giving the player a choice to leisurely stroll through the main story or grind their butts off to get the perfect kit in just the right color with all the right abilities. Grinding pays off in that you have effective answers to every enemy you face, but that also you look damn good while beating faces in.

This journey has been a good one, and I look forward to continuing to play online with others for many months to come and seeing the glee on the faces of my friends when they get their first mega rare weapon or crazy overlord ability. Snack World is vastly different and a lot less serious than a lot of the other adventure games I’ve come to enjoy over the years, but its definitely going down as a favorite.