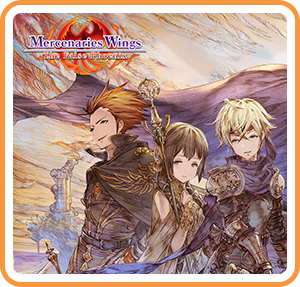 My go-to choice for tactical RPGs for the past 20 years has been the original Final Fantasy Tactics for PS1. The gritty, realistic story told within the confines of Ivalice has captivated me for years on end. So naturally, any game that comes along with a similar aesthetic easily draws my attention. It is why I immediately jumped on Mercenaries Saga Chronicles, a compilation of three TRPGs when it released back in February on the Switch, and is exactly why I also had my eyes set on the follow up to those games: Mercenaries Wings: The False Phoenix.

You may have already seen my lengthy review on Chronicles that was published earlier this year, but I’ll attempt to rehash the gist of it here. Mercenaries Saga Chronicles is a nice collection of tactical RPGs for those with a budget in mind, and nothing more. They are not remarkable by any means, and the associated price (especially for three games) matches up with that nicely. I mention my past history with the Mercenaries franchise to bring up this point: my hope going into Mercenaries Wings was that it would somehow expand on the the original games in some way. I hoped that it would push the envelope just a bit further, especially since Wings was to be a single game rather than a compilation. What Mercenaries Wings actually ended up being, however, was just more of the same. It isn’t any worse than the original trio of titles, but not any better either, making the whole “new” experience in Wings feel all-too-familiar to my in-depth look at Chronicles earlier in the year.

For starters, you do not have to play Chronicles before taking on Mercenaries Wings, as they are totally separate experiences from one another. That said, Mercenaries Wings once again has you following a band of mercenaries, but this time with a group contracted by Dryden, a Kingdom caught amidst battles over territorial expansion and civil unrest. The company of mercenaries are hired to help fill in the kingdom’s thinning ranks, and what starts as another set of jobs for them ends up leading to a story bound in political corruption and deceit. It is up to the mercenaries to ascertain whether their actions henceforth are morally just or not. I’ll spare you further details as honestly the plot, while sounding all Final Fantasy Tactics-like from the outset, is constantly dragged down by dull characters that are amplified by a less-than-stellar translation. The issues with the story in Wings very much mimic the same problems that I had with Chronicles, and remains a pattern that will persist throughout this entire review.

Mercenaries Wings is almost identical in execution to its prior franchise entries, with one exception being the new leader system (which will be discussed in detail later). For those unaware, the Mercenaries series are all grid-based tactical RPGs that are not so different from Final Fantasy Tactics or Disgaea at a base level, but not near as in-depth as either of those franchises. You will control a handful of units at any given time on the map, and you strategically manipulate them each round before retiring the turn, thus giving the opposition an opportunity to react.

There are abilities that can be performed, many of which are exclusive to each class. Both classes and abilities can be upgraded through points you earn naturally upon being victorious in combat. Variations in stats, resistances, height, direction, and distance all play a role in calculating the damage you dish out, and should all be considered in order to optimize each turn. And of course, your mercenaries can level up and equip weapons and armor in traditional RPG fashion. There are two modes of play that you can swap between as you like: the Campaign and Free Battles. Of course, the campaign has you following the main story while the latter allows you the opportunity to take on fixed, non story-driven maps in order to strengthen your team before taking on the next campaign mission.

With the basics out of the way, let’s hop back to the leader system in detail. Basically, the first unit you deploy on any given map will be the designated leader of the party for the entirety of that battle. Along with the leadership role comes a passive buff to all player controlled units on the field. The idea behind the mechanic is that you’ll want to choose the right leader for the job, but really the bonuses aren’t as interesting or life-changing you might expect. Ultimately, it feels like a good idea that wasn’t executed as well as it could have been.

Mercenaries Wings dons a very similar visual, musical, and performance profile to the Chronicles trilogy before it- save for one big difference: the character portraits. These were done by Kazama Raita, an esteemed artist that’s been involved in games such as the original Xenoblade Chronicles and Xenoblade Chronicles X prior to their outing with Mercenaries Wings. These beautiful portraits somewhat make up for the fact that everything else looks and feels exactly like it did in Mercenaries Saga Chronicles, but doesn’t entirely erase the thought from existence.

However, I was a fan of the pixel art in Chronicles and still am in Wings. It’s not the most amazing thing you’ve ever seen, but it’s nowhere near an eyesore either. The character sprites give off that FFT / Tactics Ogre vibe quite well, and that isn’t a bad thing. I think that the soundtrack in Wings is, for the most part, better than the previous games, but that isn’t saying too much considering those were mediocre at best. Sound effects are more or less the same, so combat abilities still lack any real sense of impact, especially when you factor in the accompanying, uninspiring animations they use. Overall, the graphical and audio package present in Wings works, but is certainly nothing to write home about.

Mercenaries Wings can be best described by the saying “too much of a good thing”, but modified to make it a bit more appropriate for the situation. You see, many people consider even the best of things to be detrimental when consumed in excess, and video games are no different. That’s why we see all forms of innovation in games, so things don’t get stale.

Now I’m not suggesting that innovation in games are a must, as game franchises that are very much stuck in their ways, like Pokemon and Dragon Quest, can get away with being “samey” to an extent simply because they remain high quality, enjoyable games at the end of the day. Heck, even the neutrally received EXE Create/KEMCO RPGs have occasionally proven to be above average titles without trekking far from JRPG traditions. But with Mercenaries Wings, there just isn’t enough depth to the newly introduced leadership system for it to count as really keeping the ball rolling for the series.

Because Chronicles was so mediocre and Mercenaries Wings is literally the same exact game, from its graphics and individual character abilities to the 99% broken and useless magic items and synth shop, it is hard to recommend unless you are just the biggest fanboy of the series or you just can’t get enough tactical RPGs in your life. But I can’t very well give it a harsh verdict either because it is still, in fact, a fully functional game. A mediocre game in the most genuine sense, but functional nonetheless. Mercenaries Wings could prove to be a decent filler piece in your strategy RPG slot if you are on a budget, but you’re better off picking up Chronicles first if a choice has to be made between the two.

OKeish is the right word to describe this game. Good review.