First-Person Dungeon Crawlers are often a love-it-or-hate-it affair. If one wishes to have a more balanced combination of exploration and combat, these grid-based titles often emphasize the former while using turn-based combat with its own nuances. With such deliberate and detailed level design, its no wonder the dungeons in these games are often labeled “labyrinths,” possessing multiple floors, nooks, and crannies, and of course, enemy encounters. The popular Etrian Odyssey titles, with the exceptions of the Untold remakes, usually focus more on dungeon design rather than story, which is often the main reason a Role-playing enthusiast may not prefer them. As series director Komori Shigeo notes, however, this “[allows] you to go on adventure of your own, to play and think freely.”

That being said, Labyrinth of Refrain: Coven of Dusk occupies a rare space within the subgenre. No stranger to strategic Role-playing titles, Nippon Ichi Software’s first attempt at first-person dungeon crawling is surprisingly unique in ways that might surprise a seasoned veteran and make the title far more accessible to a newcomer. In typical NIS fashion, the narrative is suitably bizarre, though much more approachable and thorough in concept than its contemporaries, and its combat is both complex in certain ways while simple in others. Is it compelling enough to make the whole experience a must-have, however?

As the subgenre name implies, first-person dungeon crawlers usually alternate between grid-based dungeon crawling from a first-person perspective and navigating menus in “non-dungeon” environments. Although these dungeons are viewed from the first-person perspective, there is a party of characters- mananias, or animated puppets, in Labyrinth of Refrain- that brave these mysterious environments and partake in combat. The unique element of mananias is explained away by the ridiculous and somewhat endearing narrative, but because these creatures have no lives, their magic abilities are instead tied to the coven they have made pacts with. These covens have both active and passive benefits and can be boosted in effectiveness themselves through numerous encounters. Covens are assigned via scrolls, and though the choices are limited at first, they expand as the player continues to comb the dungeon for items. 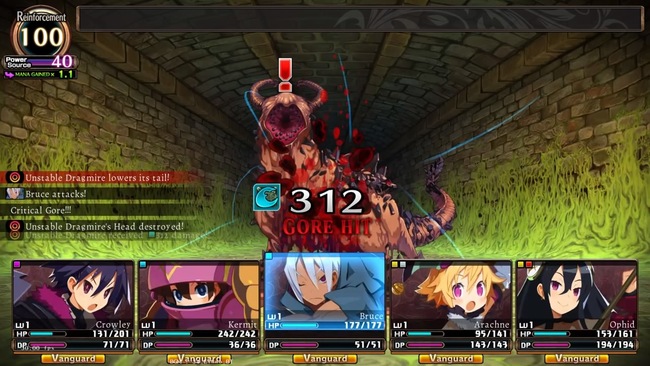 The ability to assign manania to a coven drastically increases the potential of all six starting classes, which each possess their own weapon proficiency, stat distribution, and passive abilities. Because of this coven mechanic, assigning a damage tank to a medicine-based coven allows that character to operate in the role of HP sponge rather than a pure physical fortress. With covens eventually expanding to massive eight-unit parties, there are plenty of opportunities to customize and hone their abilities for battle. That being said, it is the ringleader of the puppets, a book titled the Tractatus de Monstrum, that grants attack and defense buffs via a clever reinforcement mechanic, which is counterbalanced by the size and capacity of each coven.

The potential of each manania can be increased with various types of equipment, which can be collected from fallen enemies, recovered from chests, and unsealed via various methods. Attacking enemies with the correct weapon weakness raises resonance, which can cause additional damage multipliers and boost the power of spells. The Tractatus de Monstrum can also be powered up through the accrual of mana, another resource harvested from within the labyrinth, which has a dual-purpose role as an in-game difficulty slider, a truly neat little detail. In order to power up the book and obtain rarer drops from enemies, players will have to gather larger sums of mana, but instant-warping will cause them to lose a percentage, and gaining too much on a floor with a low limit can cause serious and dangerous consequences for your party. Its a nice risk/reward system that encourages survival and expedience.

Much of the learning curve in Labyrinth of Refrain comes from learning the various titles, terminology, and their importance within the character progression system and combat, so it is rather nice that the actual dungeon crawling is very straightforward. The opening stratum of Labyrinth of Refrain is vast and interconnected, but it operates on looping paths and switches that allow for quick, cyclical visits. However, as the narrative progresses, the player unlocks additional skills that vastly increase the area and ease of access within the labyrinth. One of the more empowering abilities comes in the form of busting down walls in order to find secret chambers, filling in almost all of the dead space that might be found in a more linear dungeon crawler. Enemy complexity and the strategies for their defeat steadily increase as the game progresses, however, it never seems to occur at so rapid a pace that the player feels unprepared or out of their element. This is helped by the fact that enemy encounters appear as visible units patrolling the maps, a distinct choice that allows players to circumvent and catch their opponents off-guard. For the most part, Labyrinth of Refrain seems content with a more laid-back exploration experience, even when there are trips, pitfalls, and enemies abound.

If there is one thing NIS games tend to nail, it is the ability to skip some of the flourish they often include in the form of voice-acting and dialogue. While Labyrinth of Refrain’s story is no great piece of literature, its characters are also charming enough that they earn their keep. Dronya in particular is played straight and with some pleasant voice-acting, despite numerous characters commenting (well, more than just that) on her alluring appearance. Although in general, the character portraits (designed by Disgaea veteran Takehito Harada, among others) are quite a treat, possessing a clean look that is distinct to NIS and their titles.

For story sequences, the game features fast-forwarding, auto-scrolling, and a full-on skip functions for those who can’t be bothered. There are several quick-select options for play within the labyrinth, as well, which allow the player access to a full-screen map, auto-attack, and other abilities and functions, which make for a snappy gameplay experience. The labyrinths themselves are rendered in 3D, and the textures are nice enough that they don’t grate the eyes all that much. There’s plenty of diversity to be found in the way each labyrinth stratum looks and is constructed, which add to the feel of traveling into numerous unique scenarios. Truly, the gimmicks and hazards found throughout these mazes are a fantastic blend of aesthetic and gameplay, and despite their twists and turns being more avoidable and predictable than others in the subgenre, they are by far the strongest element that Labyrinth of Refrain has to offer.

The way the player moves through these halls is brisk enough that even the relatively large and full-featured maps don’t feel like a slog to explore. However, the mini-map doesn’t help the player very much in establishing their position and objective, which often leads to frequent full-map checks. Although this process is relatively painless, one can’t help but think a split-screen approach might have benefited exploration a bit more. In other words, Etrian Odyssey exists and has shown players the power of dual-screen dungeon mapping, and its absence here is a small, but noticeable inconvenience.

As a Role-playing enthusiast with a hunger for first-person dungeon crawlers, as well as a longtime Etrian Odyssey fan, I will say that I was pleasantly surprised by the title. There is just enough here that is different in execution, from the complex party composition, to the expanded exploration options, that the game truly feels fresh and wholly different. These slight gameplay folds help transform a generally methodical and tentative subgenre into a faster-paced, more straightforward experience. Bypassing walls with hammer blows can be enjoyable and empowering, just as bodies of water can prove impassable and a true obstacle meant to be circumvented. Combat is simplistic on the surface, but the expansion of covens and the various skills that accompany them branch out and allow for multiple party compositions.

For an introduction to the subgenre, there’s plenty here that is meant to ease in players that might be more familiar with a faster-paced game. However, its strict narrative/exploration objective split, a common element in these titles, might prove a bit too jarring or unappealing for some. The gameplay featured in the depths of the labyrinth is not totally dissimilar to the tone of the cut-scenes, with some odd NPCs and characters bleeding over into both sides, but the voice-acting, pacing, and overall unfamiliarity of the main narrative may prove a bit too bizarre for some. There’s definitely some dicey material in here that is not suitable for children, though the characters do have plenty of growth and payoff over the course of the story. While this narrative doesn’t detract from the gameplay of the labyrinth, returning to the surface is often the only way to unlock new progression abilities and triggers that will open up after viewing a cut-scene. Again, these scenes can be skipped, but there is only so much exploration a player can do before being forced to take a break.

While it satisfies all of the hallmark aspects of the first-person dungeon crawler- the feeling of accomplishment that accompanies a large mapping session, the loot-gathering nature of repeated cyclical visits, and turn-based combat with its own unique flair, this first attempt has both the good and bad elements of the subgenre. Its wacky narrative and the impact it has on the design of the labyrinths is certainly unique, but the game never rises above its contemporaries, rather offering an experience just as full-featured and lengthy. For a full-retail title, there is plenty to see and do in Labyrinth of Refrain, but it still comes with a strong warning: if other first-person dungeon crawlers aren’t your thing, this game won’t do much to change your mind. Like Disgaea, it serves as its own unique entry into its subgenre, doing so with competence, flair, and even a few unexpected delights. It may not be a masterpiece, but it is well-worth a look.