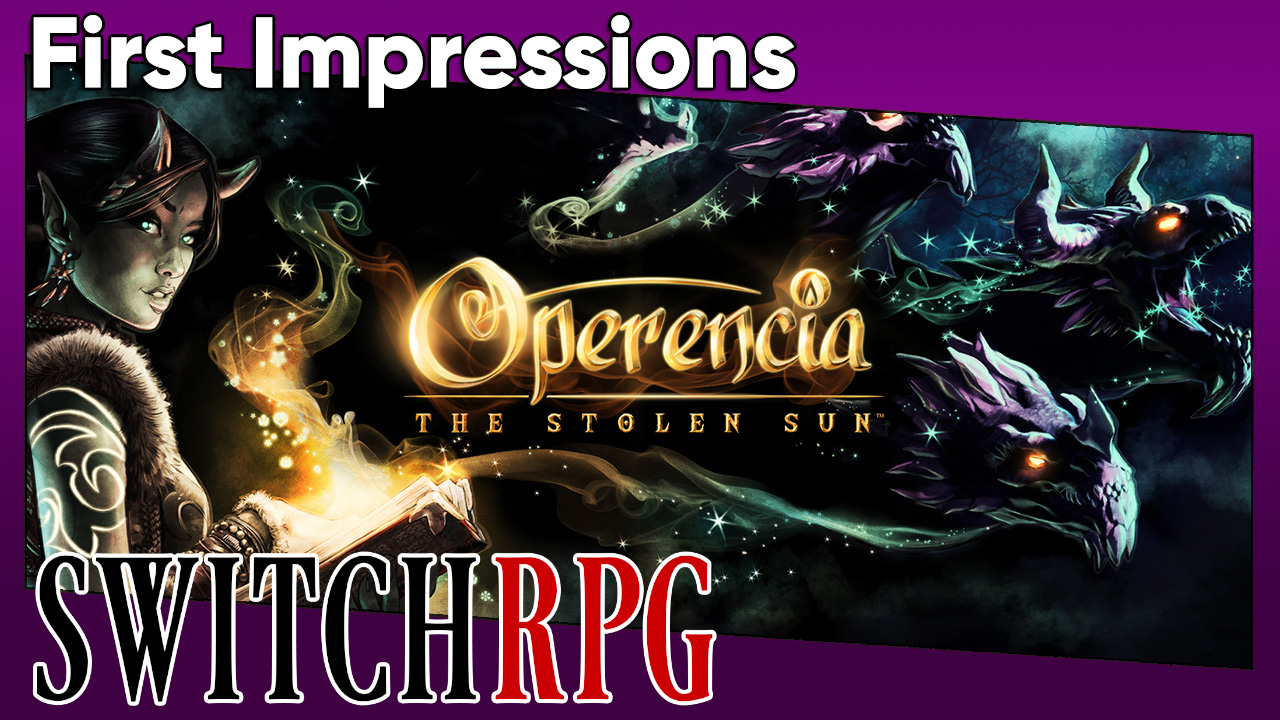 As SwitchRPG and its staff become more seasoned, we hope that our tastes as genre enthusiasts become more evident as the site article catalog grows more and more. By this point, I’ve waxed nostalgic about First-Person Dungeon Crawlers, and even logged a few Switch titles under my belt as a reviewer. Simply put, I love the genre, which is why I’ve found it sad to transition from the 3DS- where I originally played titles like The Keep, Severed, and Etrian Odyssey with its many, many installments- to the Switch. While the console has had a few major releases, such as the aforementioned Labyrinth of Refrain and Drawngeon as well as Vaporum, The Lost Child, and Heroes of Monkey Tavern, it has yet to offer a First-Person Dungeon Crawler that has truly captured my attention and imagination. That is, until I saw the announcement that Operencia: The Stolen Sun would be heading to the Switch today. While I’ve been sinking my teeth into the game in preparation for a review, I wanted to give some first impressions for those who might be on the fence. Does this turn-based affair wow with impressive aesthetics, or will the gameplay leave you dry? Read on below.

Operencia tells the tale of a fantasy realm of the same name, a world comprised of many high fantasy staples: dragons, kings, knights, rogues, giant insects… the standard fare. However, the lore behind Operencia is extremely compelling, offering welcome twists in character backstories and the history of the realm and its locales. Though its prologue introduces a powerful trio whose combat capabilities prove formidable as both a kick start to the narrative and a well-crafted tutorial, the player quickly assumes the role of their own avatar, able to select between three different classes and a number of portrait types. These are much more familiar, with ranger, warrior, and mage archetypes and skill trees for the player to invest and explore. The origin of the player’s quest is anything but rote, though, as they set off to follow their mysterious dreams of a white stag leading them towards their destiny. 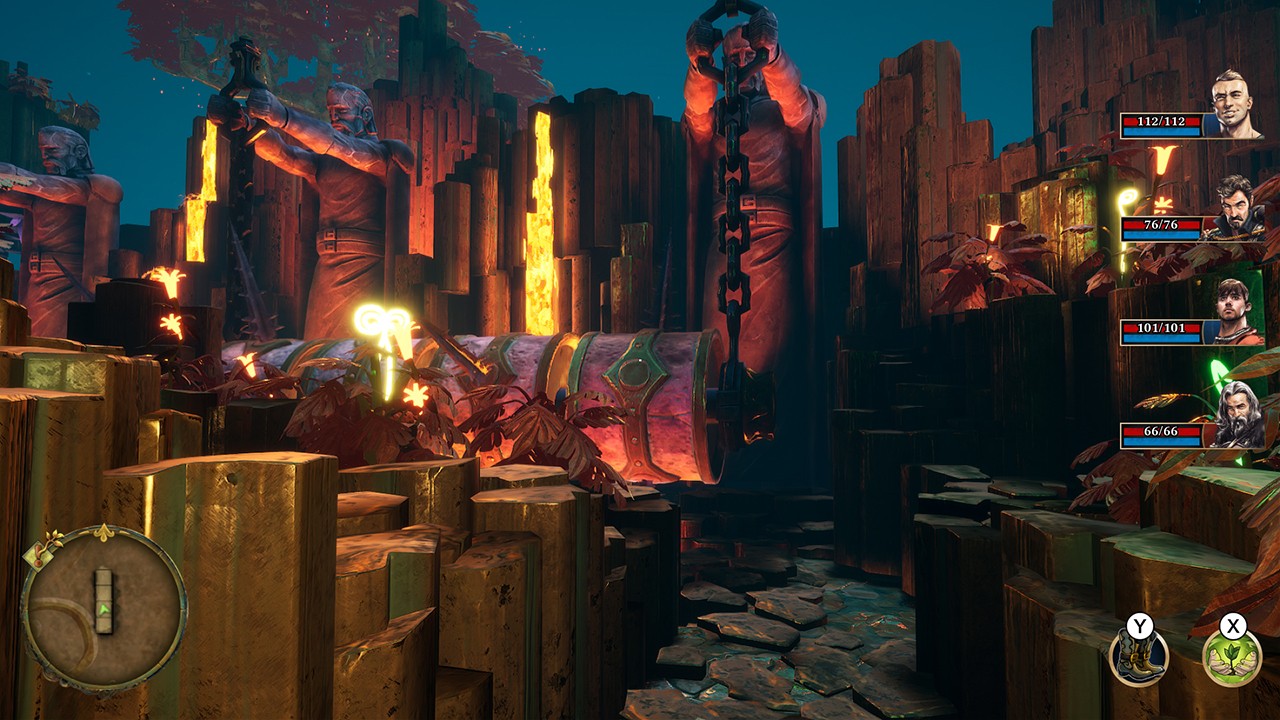 Along the way, you’ll recruit pre-built party members to your cause, each with their own distinct voice acting and personalities. The amount of voiced dialogue in Operencia is truly impressive, and you’ll get the chance to experience it not only in cutscenes, but also while traveling through dungeons and sitting at campfires, the game’s save and heal system. Though their classes and starting abilities may be pre-determined, the player is free to explore their skill trees and stat and equipment customization. You need not worry about the weight of your player avatar’s class, either, as your party members will come with utility and combat abilities that possess synergy with any and all of them.

Exploring dungeons tends to be both oddly linear and yet also very much up to interpretation. While I tend to prefer a number of branching paths mixed with open areas in my dungeon-crawling, Operencia rarely features larger rooms, preferring to economize space so that players need to work with the dungeon mechanics in order to progress. Its environs are littered with traps, some simple logic puzzles, while others task one with re-examining their surroundings in order to find hidden interactive elements or puzzle solutions. Because of the free-movement camera system that allows you to view any tile from whichever angle you’d like, you might find yourself doing a great deal of “wall combing” in the game’s early stages: looking for those sparing places where a switch is hidden in an unassuming and/or recurring wall decoration. Likewise, you might also spot a magic wall or two, which reveal secret areas of their own. What’s actually rather impressive is how many secrets are hiding throughout dungeons when it seems like the opposite- claustrophobic corridors might lead you to question the design sensibilities, but only until you realize something is hiding under the surface.

Even so, there are a few environmental puzzles and interactive elements that aren’t well-telegraphed, which can prove frustrating. In the first dungeon, the player is given location titles that, unfortunately, are not labeled on the game’s map. Though not all First-Person Dungeon Crawlers do this, they’re usually straightforward enough with their hint puzzles and interactive elements that the results seem obvious in how they are meant to be manipulated. Operencia doesn’t stick with dungeon gimmicks all that long, either, with many rooms featuring a specific type of puzzle that is doubtful to be found again. While this means there’s a great deal of variety, it’s counterbalanced by the game’s unfortunate lack of combat. 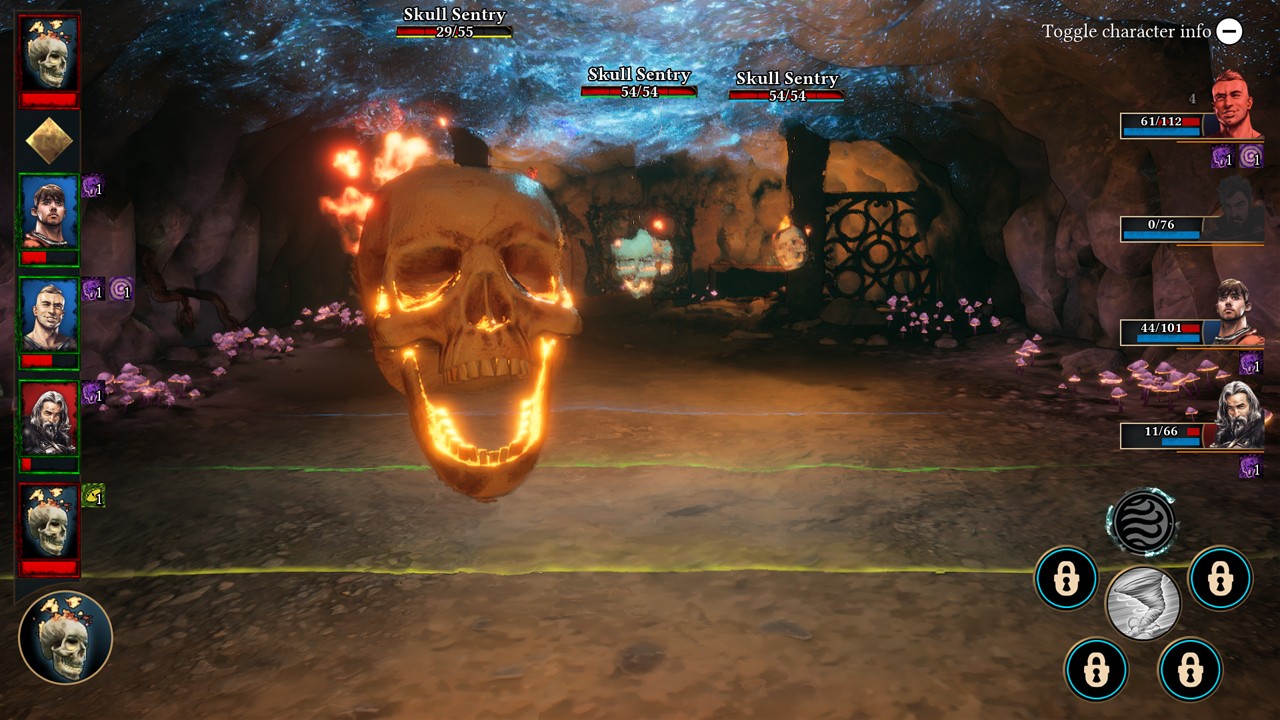 When I say “lack,” I don’t mean “absence.” Operencia has a quite nice combat system, actually, which features three-lane positioning and an energy system that mixes resource management with concentrated, skirmish-based tactics. All skills cost energy, but skills can possess a variety of traits, such as the enemies they target, their range, their effectiveness on enemies of a certain position, and whether they are physical or magical. Most moves also have hit and debuff percentages associated with them, so while you might miss because an enemy dodges, you can just as easily miss because… well, your character missed. But there are a slew of character stats that factor into the effectiveness of your defense and offense, and can also effect the kind of equipment you wear. While your skills do cost energy, every party member has a melee, ranged, and defense skill that cost no energy, with the last of this trio actually regaining a percentage of you energy. This means that, as long as you play your cards right, you’ll be able to perform your preferred tactics with consistency.

All this talk of mechanics, but the main problem here is that, outside of scripted enemy sequences, every map only features a set amount of enemies, meaning that once you’ve cleared out an area, the remainder of that section of the map is often spent running back and forth, reading clues, solving puzzles, and second-guessing yourself. On one hand, it would be frustrating to attempt to complete many of these environmental puzzles with random encounters getting in the way, but the levels do feel somewhat barren once the enemy has been routed. You can return to previously-cleared maps in order to comb things over, but enemies don’t respawn… bummer.

One of the main draws of Operencia are its visuals, which are much more crisp than most First-Person Dungeon Crawlers. I can’t honestly say I’ve ever seen a game in the subgenre look this good, but it does end up making things feel a bit cluttered, or complex to the point that important interactive elements are lost. Even so, there’s also some very impressive lighing and environmental effects, making the game truly feel more like a fantasy world and less like a set of grid tiles. There are repeating elements, but they’re presented in such high fidelity that the whole thing looks natural. The sound mixing is a bit more of a mixed bag, however, with a slew of voice acting and sound effects, but some slightly obnoxious mixing on the latter. Taking enemy damage truly feels like a struggle, as your party will grunt and groan with aplomb and marked volume. There are audio options, but that these are mixed at a higher volume than most other voice clips feels odd.

So far, Operencia is shaping up to be an impressive, but flawed experience. Do any of these issues resolve themselves before the game’s conclusion? Keep your eyes open for our review in the near future, and let us know your feelings on First-Person Dungeon Crawlers in the comments below.