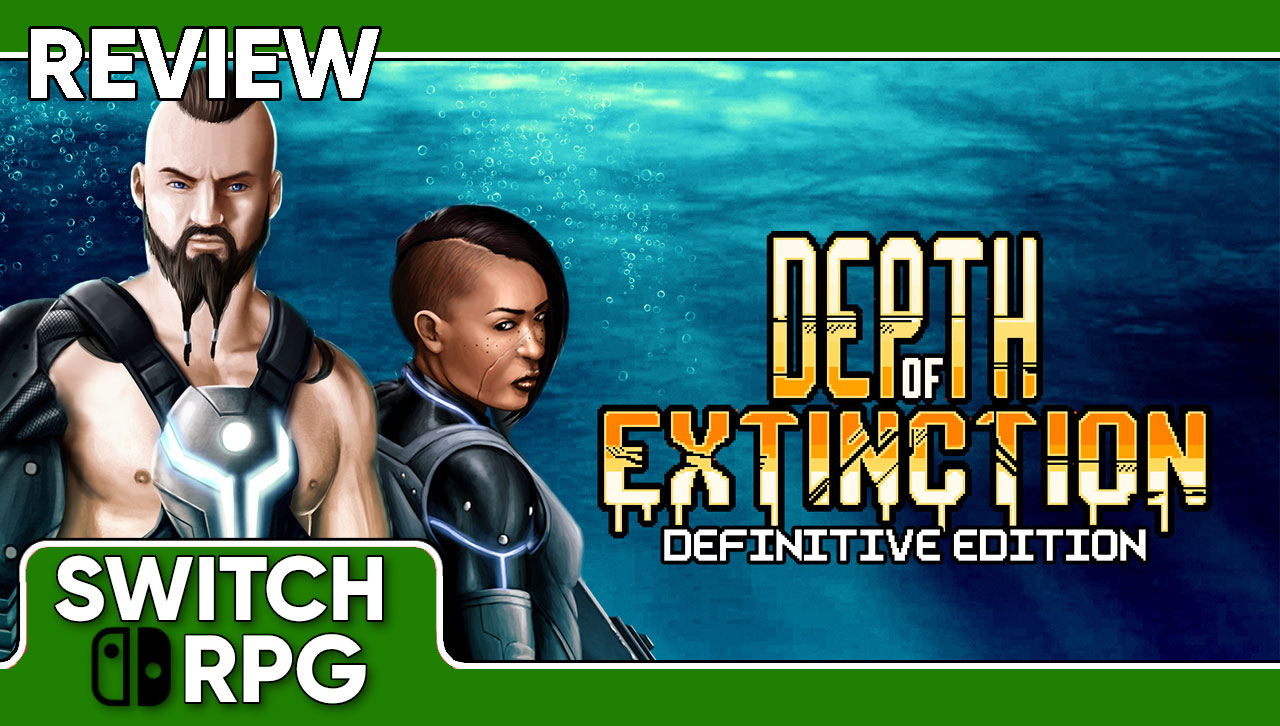 Strategy games come in all different shapes and sizes, and resource management is a huge factor when dealing with strategic approaches. Some strategy titles will limit or expand the size of your current team on a mission to mission basis, while others will impose a hard limit on this amount, which leads to a certain subgenre title known as “squad-based” gameplay. Balance in these kinds of games can always be a toss-up, seeing as certain teams might be at an inherent disadvantage due to a lack of synergy and the threats being taken on can vary in intensity, but squad-based games also possess limitations so that the developer can be very mindful of what the player may or may not have at their disposal.

What happens, however, when you randomize environment size and enemy composition and enforce strict punishments on the player? Well, you get a game that isn’t very beginner-friendly, and it likely looks a great deal like Depth of Extinction.

Depth of Extinction is a turn-based, squad-based strategy RPG with roguelike tendencies sprinkled in. There is a main campaign with cutscenes and an overarching narrative to follow, though due to the flimsy state of your playable squad, your party members won’t factor greatly into the action or drama. You’ll have the opportunity to select from a small list of objectives, some of which will progress the story while others unlock specific benefits for your squad, like a better submarine or new kinds of gear. Each of these missions is no slight task, however, as they all possess multiple node-based maps littered with locations to visit. Though the comparison is often used, the map is structured in a way similar to FTL, where one can travel between points in order to select different mission types. It is important to stay mindful of your fuel reserves, however, as running out will force you to start drifting with an emergency beacon, which has a chance of attracting unsavory types. 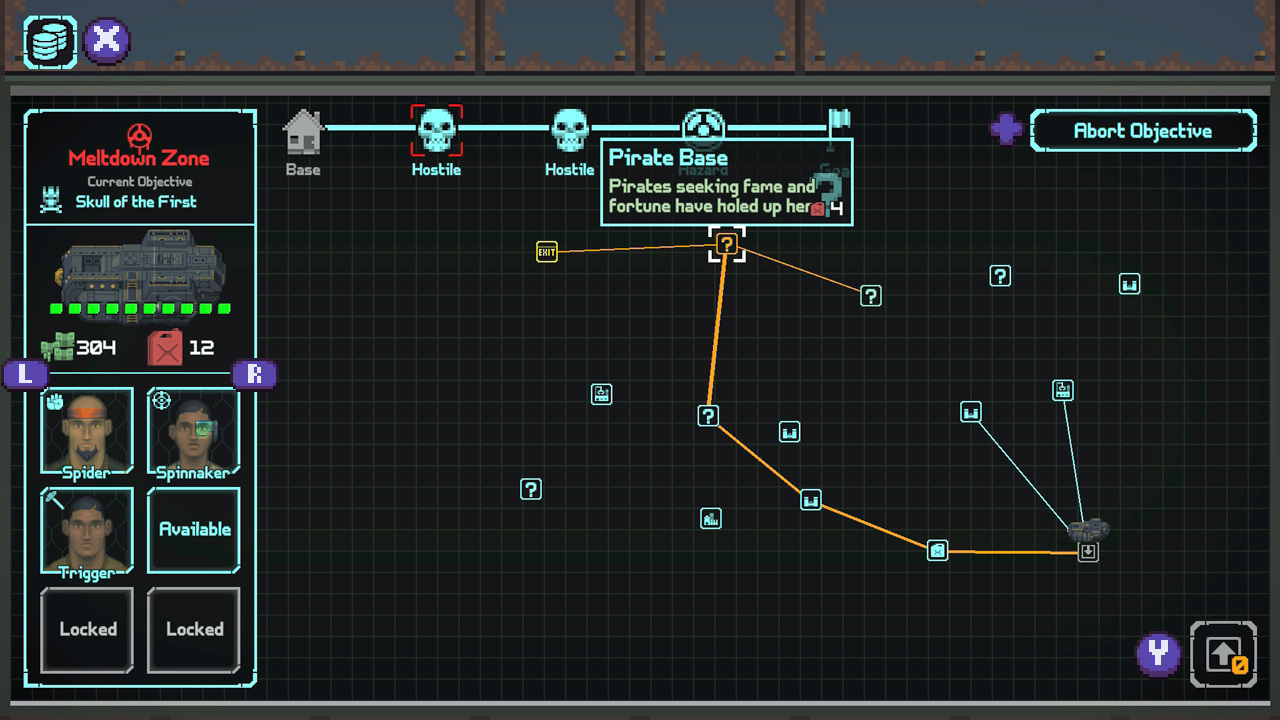 When previewing a node, you’ll see a basic description, which then can turn into a more complex scenario upon arrival. For example, an encounter with a slave ship is a chance to either do business, mind your own, or open fire, which will start a skirmish and lead to continued variance in results. This is only one of many different scenario types that Depth of Extinction will offer, but each of these is inconsequential in relation to the overarching objective. You’ll need to navigate these node maps successfully to reach the objective node, which will take you to the next node map. There are usually three-to-five node maps for a single mission, and the final objective node is often a more difficult skirmish. You can abandon a mission at any point during your run, keeping any experience gained, but this also makes any and all losses sustained permanent.

Skirmishes themselves play out as somewhat non-linear battles taking place in randomly generated environments. You’ll start from a sub-docking area and choose your direction of interest, entering adjacent rooms and clearing them out while attempting to complete the skirmish objective. Though you’ll spend a great deal of time taking out enemies, clearing the field is often an ancilliary bonus, allowing you to flip switches or escort hostages more safely. For a game set in a post-apocalyptic, flooded planet Earth, there’s not a great deal of variety to be found in the watery wasteland. Your options are either inside underwater bases, outside on derelict ocean platforms, or the occasional sub-to-sub warfare, each possessing their own quirks. Outdoor platforms offer the least cover, as you’ll only be able to duck behind old storage units and such to avoid enemy fire, though there are some indoor environments with larger rooms that allow for a similar effect. For the most part, you’ll be opening doors and slowly crawling down a hallway while activating your overwatch ability in order to scope out the area, as there is a very strict fog-of-war effect.

As mentioned previously, Depth of Extinction’s setting and mission structure is more of an excuse to put the player into tactical scenarios. There’s little about the world that trickles down into gameplay meaningfully, outside of some curious race concepts. There are rogue androids living on the high seas, as well as slavers and pirates. The overarching narrative cetainly sells desperation and survival, but it is a checklist of artifacts and facilities that slowly trickles new enemy types to the player. Optional missions do the same, and each mission has a theming that centers on specific enemy types or objectives. The dialogue options in Depth of Extinction offer a bit of randomized variety that doesn’t really seem to impact narrative progression or direction, but it is nice to commit to benevolent or downright nasty moral choices, even if the outcomes don’t always end up in your favor due to randomization. These options tread a careful path of moral ambiguity, so you’ll never feel like you’re leaning towards a certain moral extreme, especially since you have a crew to consider. 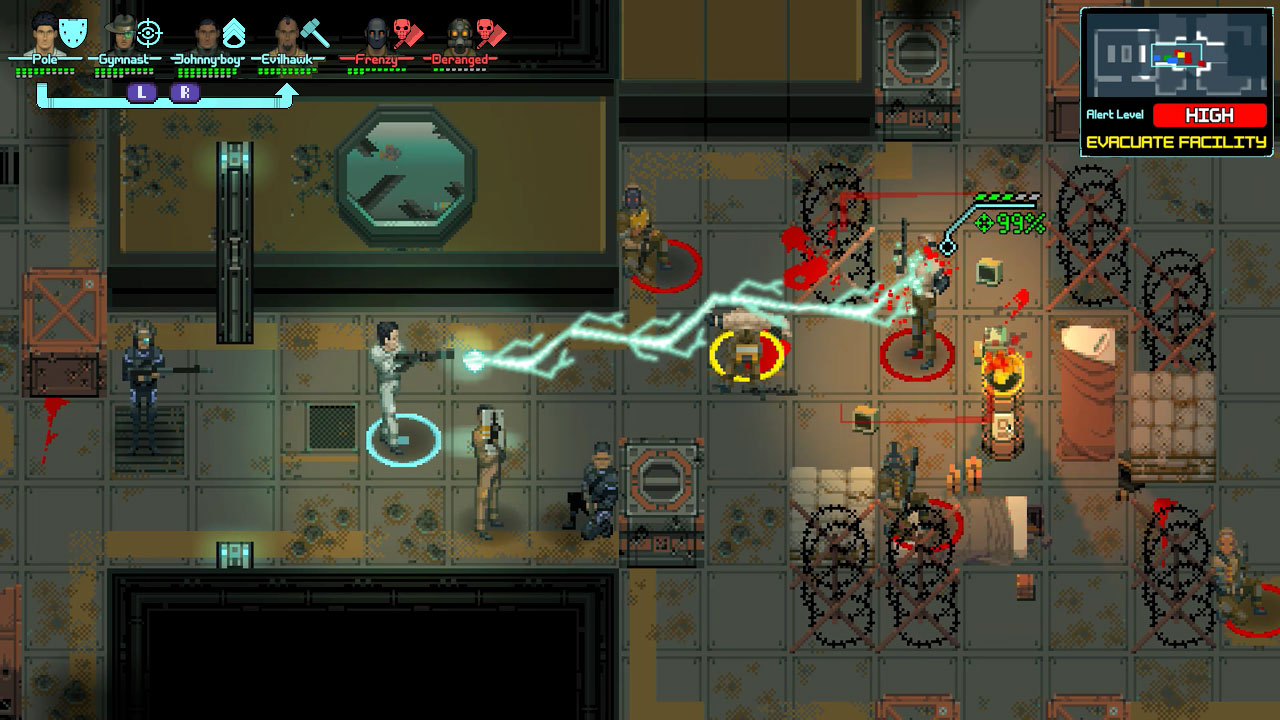 In terms of aesthetics, Depth of Extinction is bolstered by a very groovy-yet-pulse-pounding synth soundtrack, evoking some post-apocalyptic cyberpunk vibes. However, it seems that the soundtrack selection is rather small, as I found myself listening to the same tracks very frequently throughout missions. This isn’t a bad thing, as several of them are earworms and fit the pace and tone of battle very well. The game is accompanied by some meager voice work, which tends to repeat with a similar amount of frequency. You’ll hear enemies and allies alike spouting exclusive lines for their allegiance, but with a high degree of repetition. The other elements of sound design are fairly strong, however, with many guns featuring the right amount of heft and kick to them when fired.

I’m at a loss for what to say about Depth of Extinction’s art style, which is firmly rooted in the realm of pixel art, though the end result is somewhat too muddled for its own good. The character portraits are well-detailed, as are the in-game unit sprites, but they feature a palette of deep and/or drab colors that often mix with the environments they reside within. Hopefully this is evident in some of the screenshots included in this review, but when combined with the number of stats and structures featured on a map, it can all turn into noise when played in handheld or on a smaller television. This only seems to be the case when in skirmishes, though much of the loadout screen is equally cluttered with information and details that might leave you squinting. It’s not very flattering to see an objective cut off by a fuel symbol on the node map, but that’s a testament to how much information the game tends to cram on a single screen.

If you’re looking for squad-based tactical shooting, there’s a great deal to enjoy about Depth of Extinction. Two classes are hidden behind optional missions, and can expand your tactical options for team-building. Likewise, there’s a slew of loot varying in quality to be picked up from merchants throughout missions, and new recruits as well as hired mercenaries give you plenty of room for experimentation. There is, however, one aspect of this game where your mileage may vary, and it is in the permadeath mechanic.

Roguelikes are all the rage nowadays, offering a substantially longer experience with many reused assets and increased difficulty, but the longevity of your playable characters is often at risk because of this. Depth of Extinction doesn’t do players many favors in terms of tutorializing its mechanics and systems, preferring the “wait until it happens” approach to things. Because of this, you might think the game is smooth sailing, never paying much mind to your fuel reserves or the health of your teammates- until a difficulty spike occurs, wiping half of your squad and leading to the discovery that abandoning a skirmish by returning to your sub on the map will only allow you the chance to revive a single team member, with all those that have passed being dead, well, permanently. There are difficulty settings for the game, but all of them feature penalization for failing missions, which is frustrating, considering there’s a great number of resources you’ll need to balance- and take a risk on- when embarking on a mission. The level cap for units is relatively low, but when you need to be very stringent in how you dole out killing blows and attacks, you’ll discover how punishing Depth of Extinction can be when it comes to creating a decent squad.

Which is exactly the kind of experience some people look for in a squad-based tactics title, though I would say the setback caused by character death being “grinding up a new character to take on the same mission” is artificially padding the game’s playtime, and not a very satisfying form of progression. Especially when the game’s cycle of skirmishes and environments becomes monotonous rather early on. The steady additions of new enemy types throughout the campaign and the side missions do manage to spice up said environments, but you’ll be able to adapt to their behavior relatively easily. It isn’t hard to say that there’s a sizable amount of content in Depth of Extinction, I just wish the developers hadn’t limited the amount of fun I felt playing by sticking to roguelike tendencies. It’s those elements, as well as the very bad explosive mechanics (getting a bad accuracy check with an explosive weapon can end up causing friendly fire or utter misses) that turned Depth of Extinction into a more tedious play experience than a tactical power trip. A bit of difficulty in a tactics game is never a bad thing, but a slow-paced and repetitive series of skirmishes makes the entire effort can feel like a wasted effort.