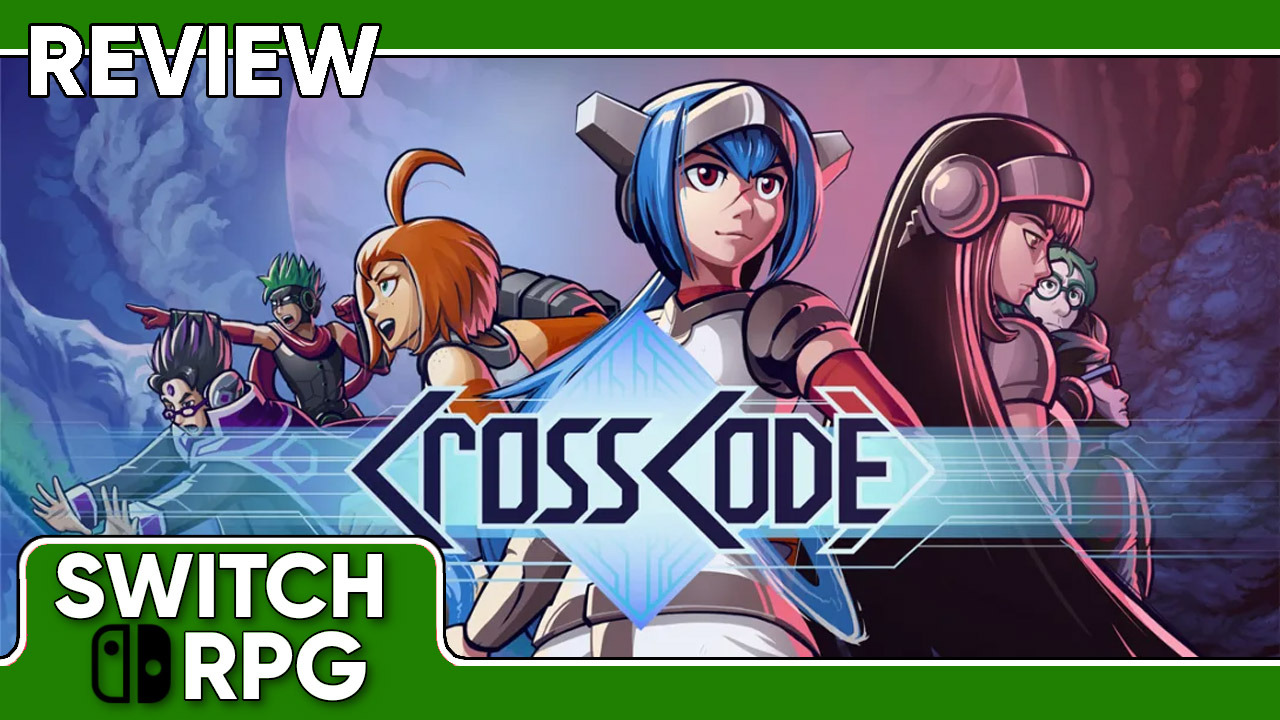 For many RPG fans, CrossCode was one of the most anticipated RPGs going into 2020 thanks to the positive response surrounding its original 2018 debut. I’ve only recently gotten around to playing it because my physical version – a beautiful steel book from Strictly Limited Games – only arrived in December, and, well, backlog problems. So, how does this retro-inspired 2D action-RPG fare on the Switch? Lets “sign in” and find out! 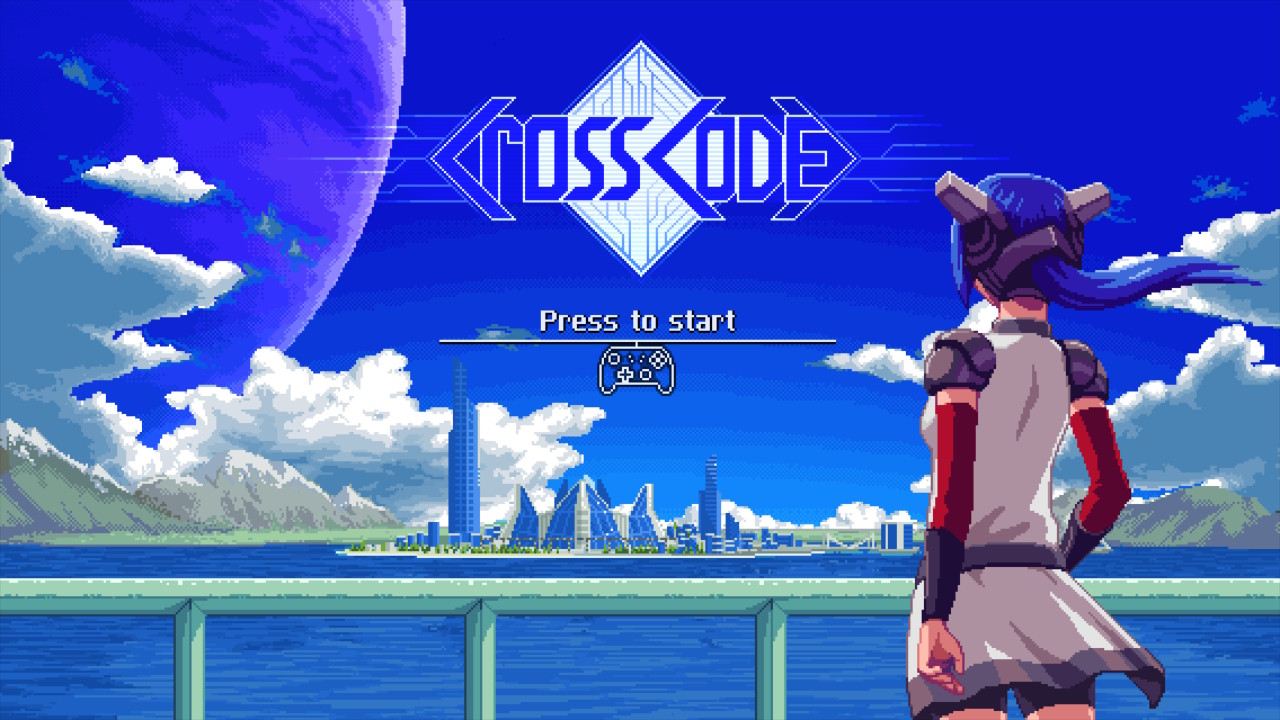 CrossCode begins by giving the player control of Lea, an avatar in the MMO called CrossWorlds. You will soon realize that there is something peculiar about Lea – she appears mute as evidenced by her malfunctioning speech module, on top of a hazy memory. Shortly after that, she will learn to say “hi,” with “Lea” and “sorry” getting added later. Soon, you will hear a man’s voice; this is the voice of Sergey who you will learn later on is involved in the actual development of CrossWorlds under the guise of the Instatainment Company. For now, he suggests that Lea play through the game in hopes of regaining her memories.

Eventually you will be introduced to a mysterious blue avatar who will attack Lea, resulting in you being rescued and brought to an area outside the game world. This concept seems weird even to Lea, but it will make sense as you progress through the story and learn more about both CrossWorlds and Instatainment. Finally, you return to the game area and become friends with another player named Emilie. From there, Lea and Emile will head off to Rookie Harbor where the real adventure begins – a vast world filled with interesting characters and unique locales to discover along the way. 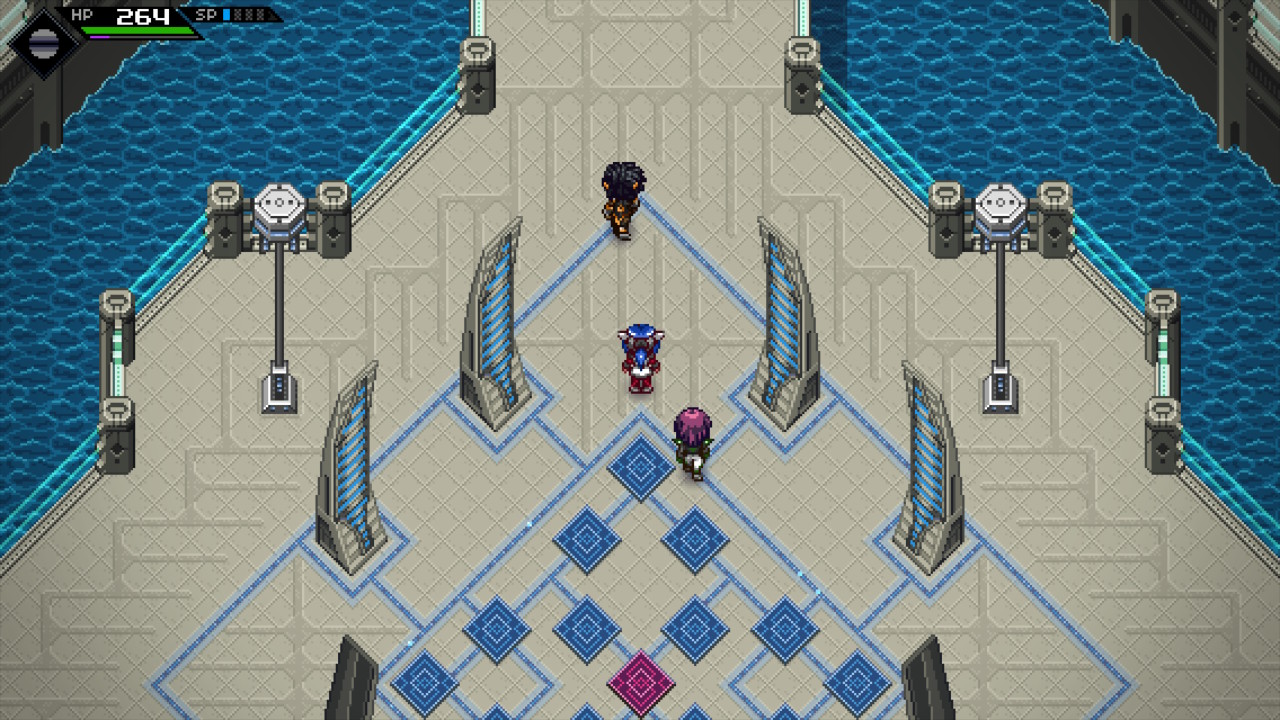 CrossCode really excels at turning an MMORPG into a story-driven, single-player RPG. In this case, it is a 16-bit adventure heavily inspired by Zelda, Chrono Trigger, and other classic games from the SNES era. This inspiration permeates through all aspects of the game – the overworld, puzzles, side quests, skill trees, etc.
After completing the short tutorial area, you are able to start exploring the initial town and associated starting area that includes the first dungeon.

Rather than a zoomed-out overworld, CrossCode has you traversing a segmented map that is akin to “zones” popularized by the MMO genre. Each of these areas are filled with enemies to battle and resources (plants) to harvest. Both enemy and plant drops are immensely useful, as they can be used to advance various quests and serve as bartering chips in the game’s expansive trading system. 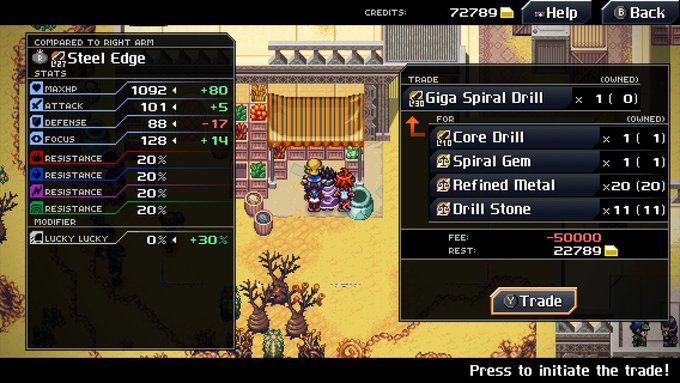 Towns in CrossWorlds offer the player lots of things to do, including a ton of NPCs, quests, and an assortment of vendors. Individual NPCs can offer quests, become trade partners, and may even join your party. There are a variety of quests in the game that range from simple to rather complex and each have an associated recommended level. Mechanically and design-wise, dungeons in CrossCode are cut from the same cloth as the Zelda series. However, when you first get to a dungeon you will notice that they are instanced, meaning you will be taking it on without your party members (a nod to instanced content in MMO).

In fact, you are actually racing your own team members to see who can complete the dungeon first. Dungeons combine a healthy mix of combat and puzzle-solving, the latter usually involving getting a ball from one location to another, a task which can be way more complex than it seems at first. Like the Zelda series, CrossCode uses the fundamentals of teaching you something in one room and then requiring its repeated use as you move to the next room and beyond.

While the puzzles may look overly complex at first, once you grasp how they work and how the various elements work you come to appreciate all the thought that went into their design. Solving them, more than anything, really just comes down to timing. Although puzzles and combat are certainly focal points to the dungeons, you will also have some platform and parkour challenges to overcome. Completing these dungeons is not only satisfying because they can be challenging, they also offer decent upgrades, experience, and sometimes new elemental abilities. 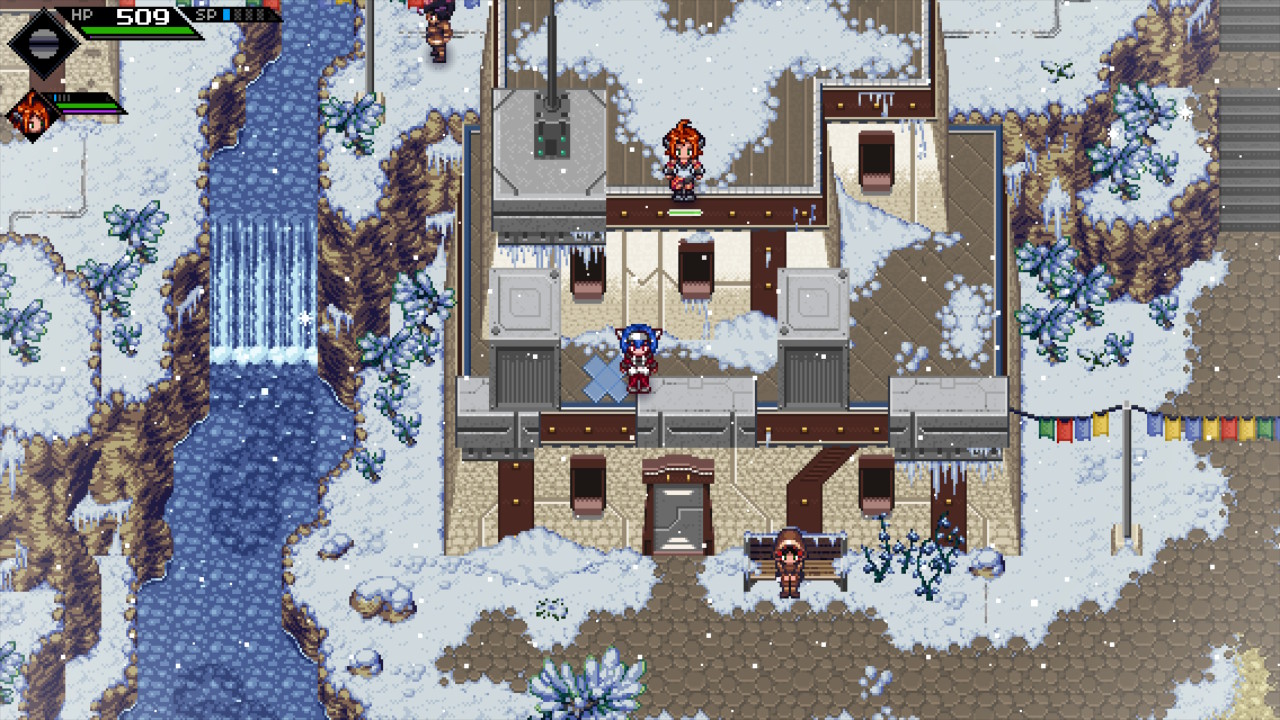 The combat system in CrossCode is great once you master it. It’s a twin-stick-styled system with projectiles and melee combat, and it may feel a bit odd until you’ve become familiar with it. It starts off relatively simple before adding complexity in the form of elemental abilities that can be seamlessly switched to on the fly. Familiarity with this is key to success, as CrossCode will force you to use all of your elemental abilities in order to capitalize on every opponent’s weaknesses.

The key character progression system (beyond equipment upgrades) lies in the circuit system. Which is quite reminiscent of the sphere grid found in Final Fantasy X. The circuit system has lots of branching paths for you to spend your CP points, which are earned as you level up. You can then spend these points on various skills tailored to your play style in the various branches. As you gain new elements, you will get specific CP points for each element as well. The circuit system offers a lot of customization and you aren’t locked into any single build forever thanks to the inclusion of respecs. 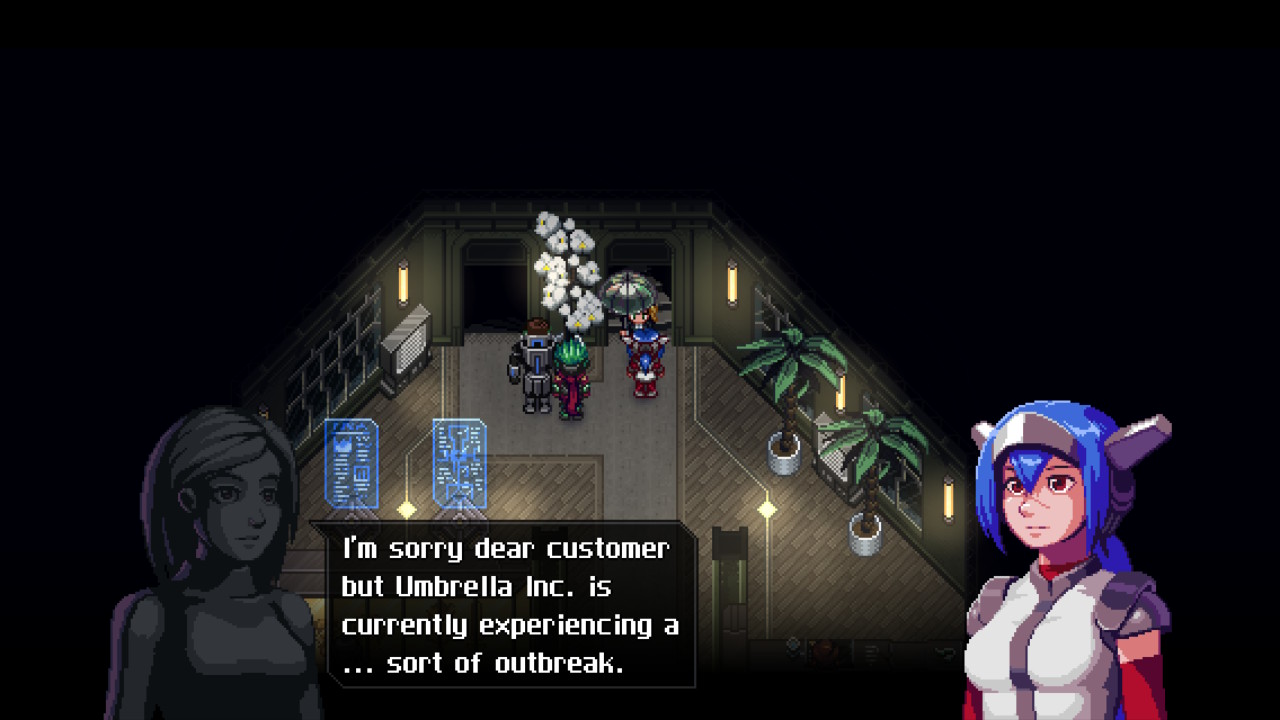 CrossCode is 16-bit pixel perfection. It’s gorgeous to look at whether you are in the snow peaks of Bergin Trail or are in the lush, colorful rainforest of Gaia’s Garden. Everything here is animated well and placed with genuine purpose – even the neon lighting and rain work for the stylized town of Basin Keep.

Character portraits are also spectacularly well done. A common theme you will notice across all CrossCode is that it is highly detailed, and everything seems to have been done with genuine care and purpose. While this definitely applies to the visuals, it also applies to the music and even the writing. The only setback here is occasional performance issues when a lot of projectiles and explosions are on the screen all at once, but those occurrences are relatively low in the grand scheme of things. 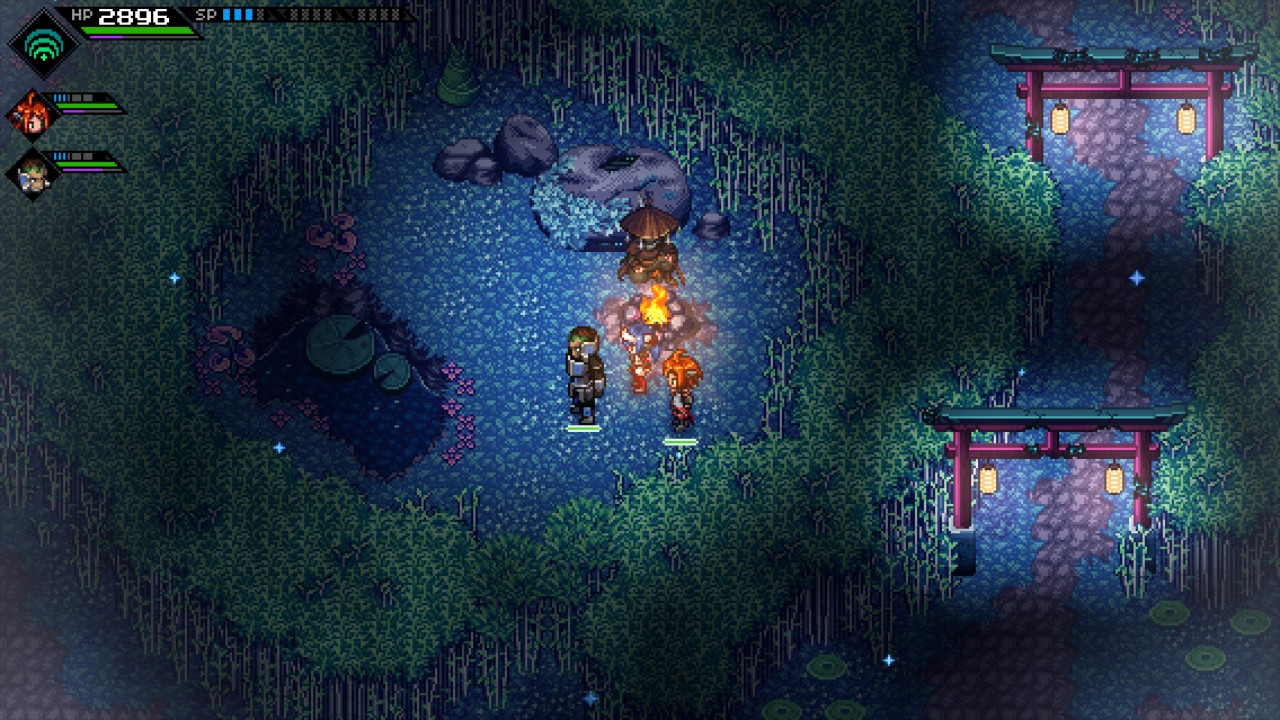 Despite a few shortcomings, CrossCode is a fantastic ride and one of the most impressive indie titles I have ever played. My 65+ hour run has been mostly fantastic. That said, its slow pace (especially in the beginning) may be an issue for some, as completing the tutorial and the first dungeon will take hours alone. It wears its MMORPG inspiration on its sleeve, meaning it can at times feel like you are going through relatively mundane tasks before things really start to pick up. Getting through that and completing it is well worth it, however, as the story does pick up and ultimately takes you on a wild ride.

There are some great fourth-wall-breaking story twists later that made it all worth it for me, and, in fact, are some of the best moments I have experienced in a game in a long time. Aside from pacing, players should expect lots of platforming and puzzle-based challenges in addition to the fast-paced and addicting combat. Regardless, following Lea’s journey and uncovering all the details of her story was a great experience.

The way Radical Fish Games was able to turn the MMO experience into a single-player adventure was no small feat. The amount of content they were able to create and put into this game rivals RPGs with much bigger budgets at higher price points. I can’t wait to log back into this world later this summer, when Lea’s adventure continues with “A New Home” DLC.