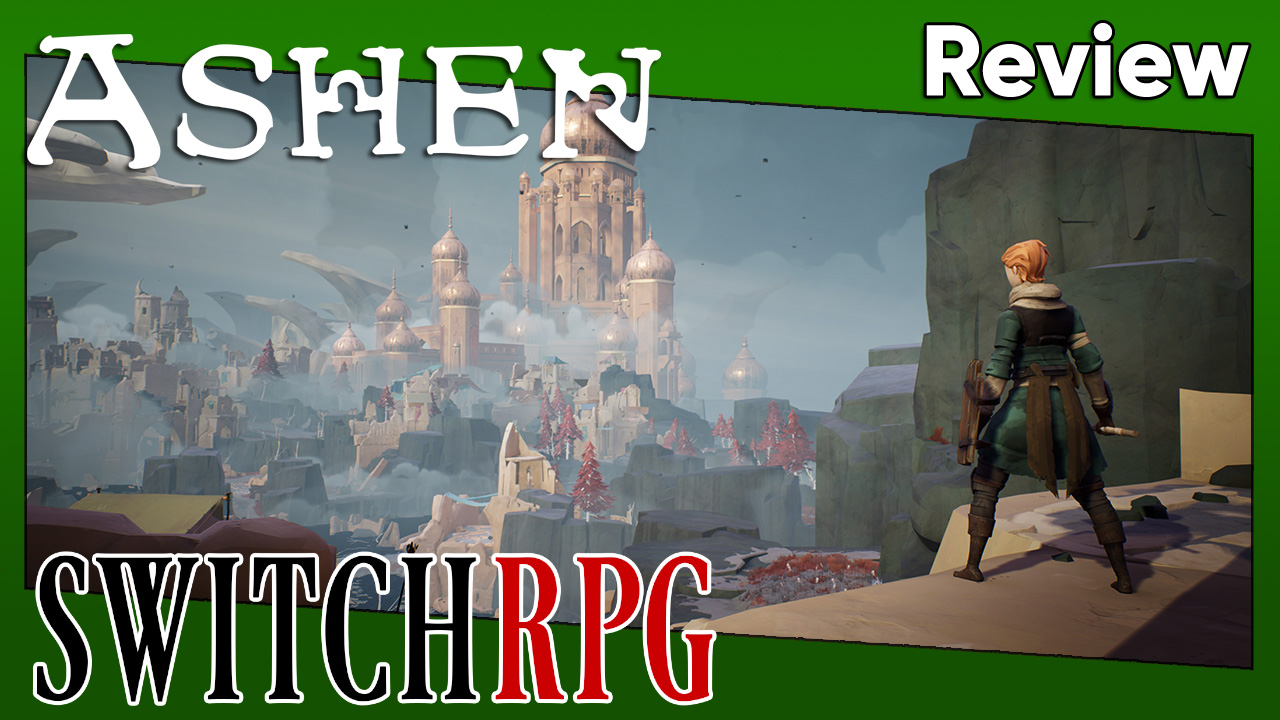 When Ashen was first revealed during a Microsoft E3 2015 press conference, it immediately caught my attention with its unique style and Zelda like influences. When it released on Xbox in the December of 2018, I checked it out quickly and, as is often the case, put it to the side. Now it’s finally on Switch- along with other platforms- and I decided to give it a second chance. 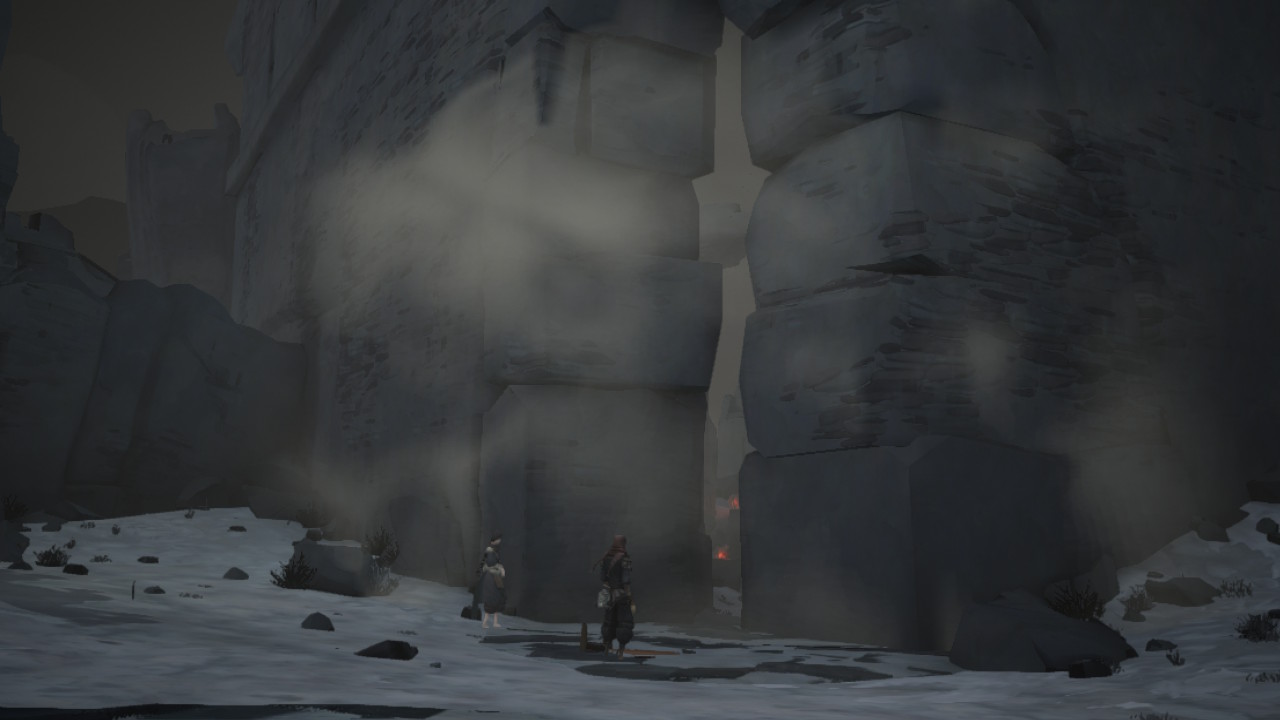 While the game’s story isn’t very complex, it’s well written and told in an interesting manner. Ashen takes place in a world that has just witnessed the Ashen’s rebirth, an event which has restored light to ash covered land. Long ago, the previously mentioned Ashen, a god-like mythical bird, was spreading light across the lands. The light was a driving force that helped evolve all life forms, but the Ashen eventually died, causing darkness to overtake the world. Although an Ashen returns to restore light once again, but accompanying the Ashen’s return are Elder Dark, a breed of evil spirits. In this epic tale, our hero must survive and conquer the darkness to save the world. The story is told via a combination of narrated cut scenes as well as from quests given to you by NPCs from your town. Most of the quest giving NPCs are characters you discover as you explore the game’s vast open world and recruit them for your town. 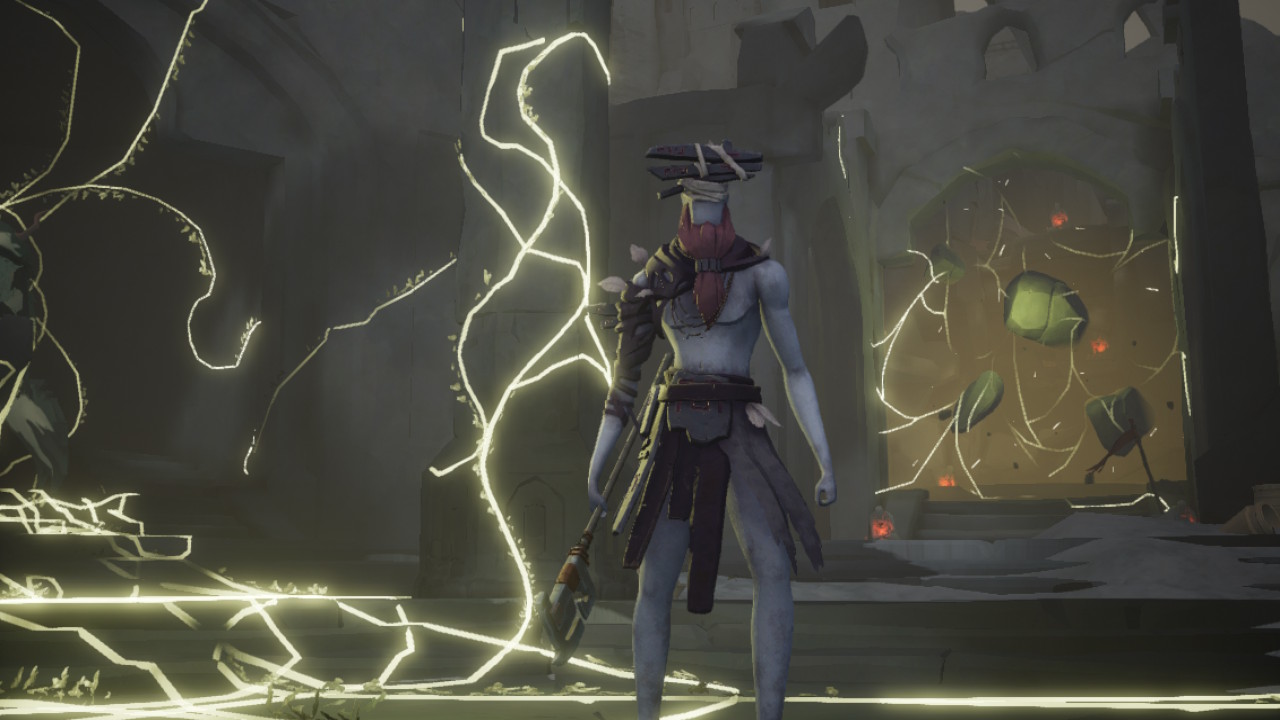 As mentioned, shortly after heading out on your adventure you will come across the remnants of a town, that, once cleared out, will become your base for the remainder of the game. Your settlement will evolve as you progress through the game, with characters you encounter returning to make it their home. Once they have returned, these characters will give you quests to complete, which will force you to venture out further into the world and explore new areas of the map and allow the NPCs to evolve upon quest completion. Their portion of the town will upgrade, and they will further assist you not only as your AI-controlled companion, but also by offering their services to you. As you complete and turn in quests to them, you will auto-level, stamina and health will increase. In addition to the stats increase, relics will unlock and new options will be available at their specific work benches. For example, one NPC offers the ability to change your relic and talisman load out, while others will allow you to increase your number of Crimson Gourds or their effectiveness. Others allow you to upgrade weapons, craft spears and potions- while armor and shields can’t be upgraded, the weapons and spears you find can be. But these aren’t free, and will require Scoria (the game’s currency) and materials you find throughout out the land in order to upgrade. Scoria is obtained from defeating enemies and can be found in stashes in the environment or via enemy drop. You will also come across white and black Ashen feathers, which are used to upgrade your health and stamina. When you die- and you will die a great amount in this game due to the tough, but fair combat- you will lose all of the Scoria you were carrying, retaining only the Scoria stashes in your inventory along with all of your gear. You will have the option to go and track down the Scoria you drop when you perish, but another death will wipe the previous “collection” and cause a new one to form at your last death site. 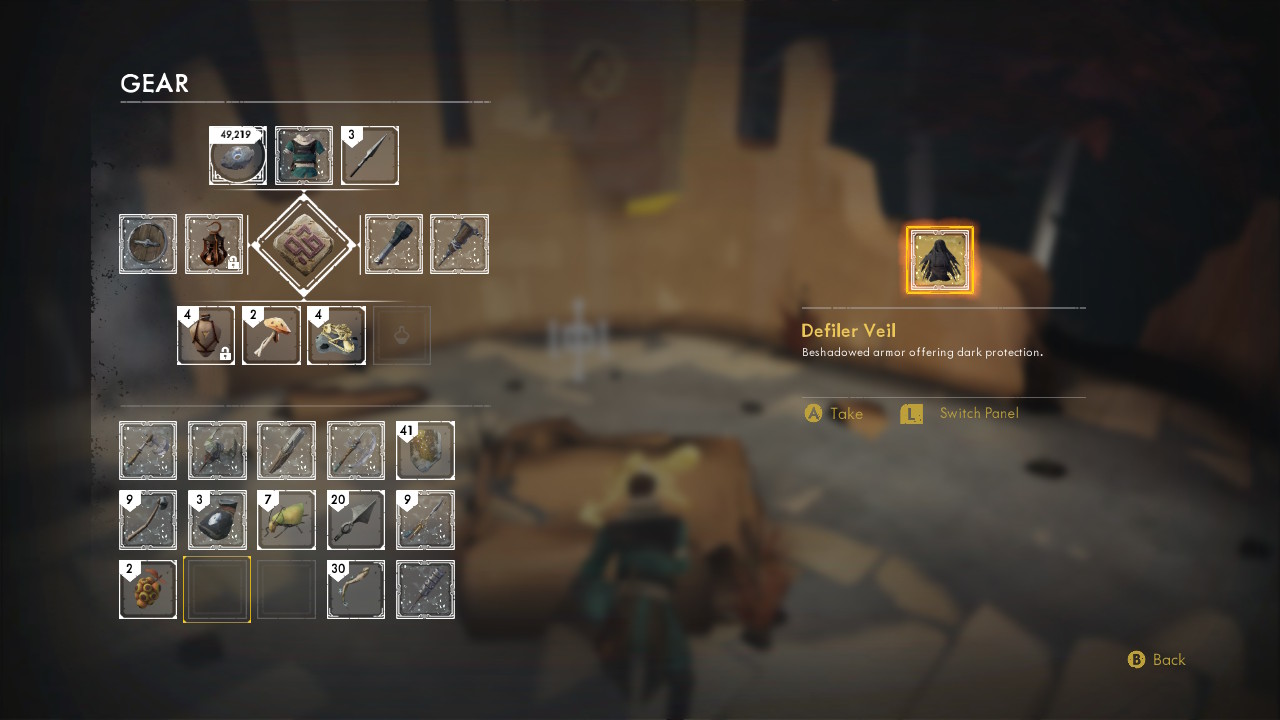 Ashen is combat- and exploration-heavy game, though both utilize a stamina-based system. Every time you run, dodge, throw a spear, or swing your weapon (either heavy or light attack), you will use some of your stamina. In addition to the crafting items found on your adventure are also weapons, armor, and shields, each of which has an effect on your stamina. It’s important to pay attention to your loadout based on your play style and the boss or enemies you are fighting. In addition to the weapon and armor stats, you can also adjust and tweak you relic and talismans to help with health and stamina boosts. You can also find consumables or craft potions to refill these if you are in need. 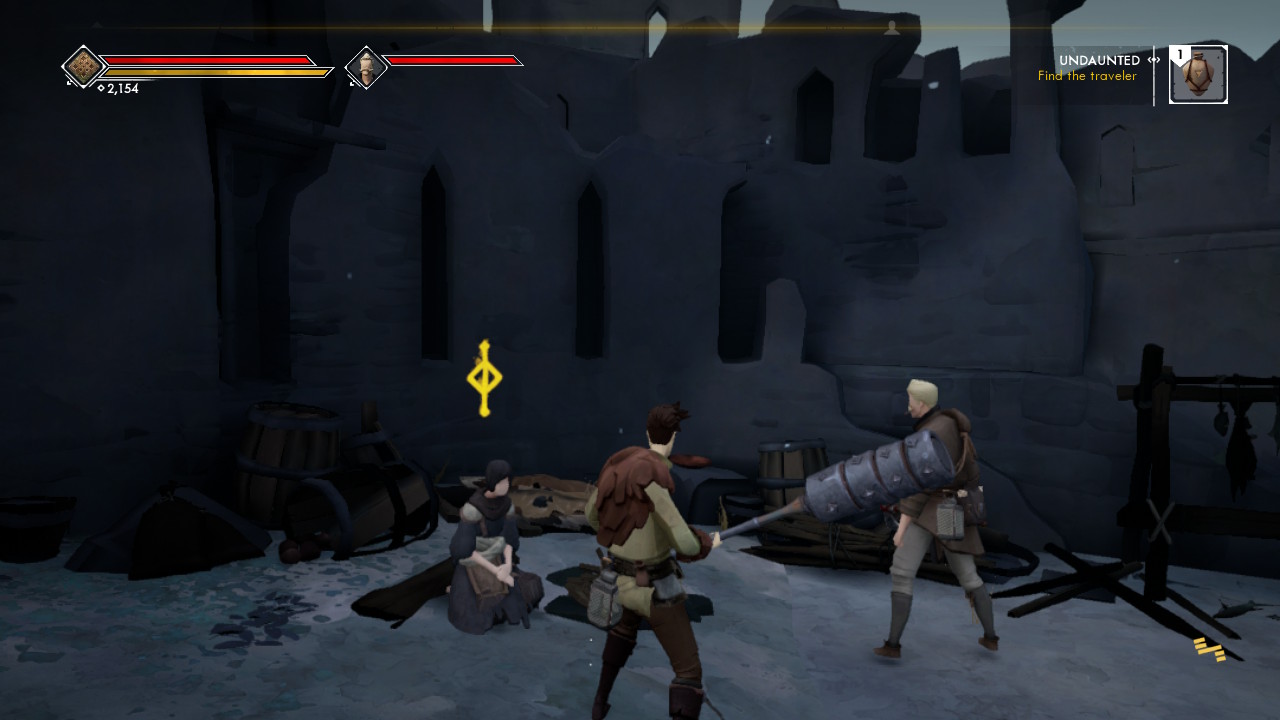 As you progress through the story and meet new NPCs, several of them will also tag along with you on your adventure and aide in combat. This companion can also be an online buddy and play in co-op if you choose, but I found the co-op system to be tedious when trying to get it to work, so I stuck with the AI controlled version. You can turn this off entirely if you want as-well, but I found it to be useful in certain scenarios, as it allowed me to stay back and pick off enemies while my partner drew them out. Lastly, your companion can revive once you if you fall, which can be reset if you have made it back to a ritual stone to heal up and save your progress. Ritual stones are sprinkled throughout the map and act as a checkpoint, save, and heal system, later acting as the game’s fast travel system after certain events. You will also find these within the game’s dungeons, but they are only for healing/checkpoint usage. Be prepared when taking on a boss, or you will need to re-navigate the dungeon again if you should fall in battle. 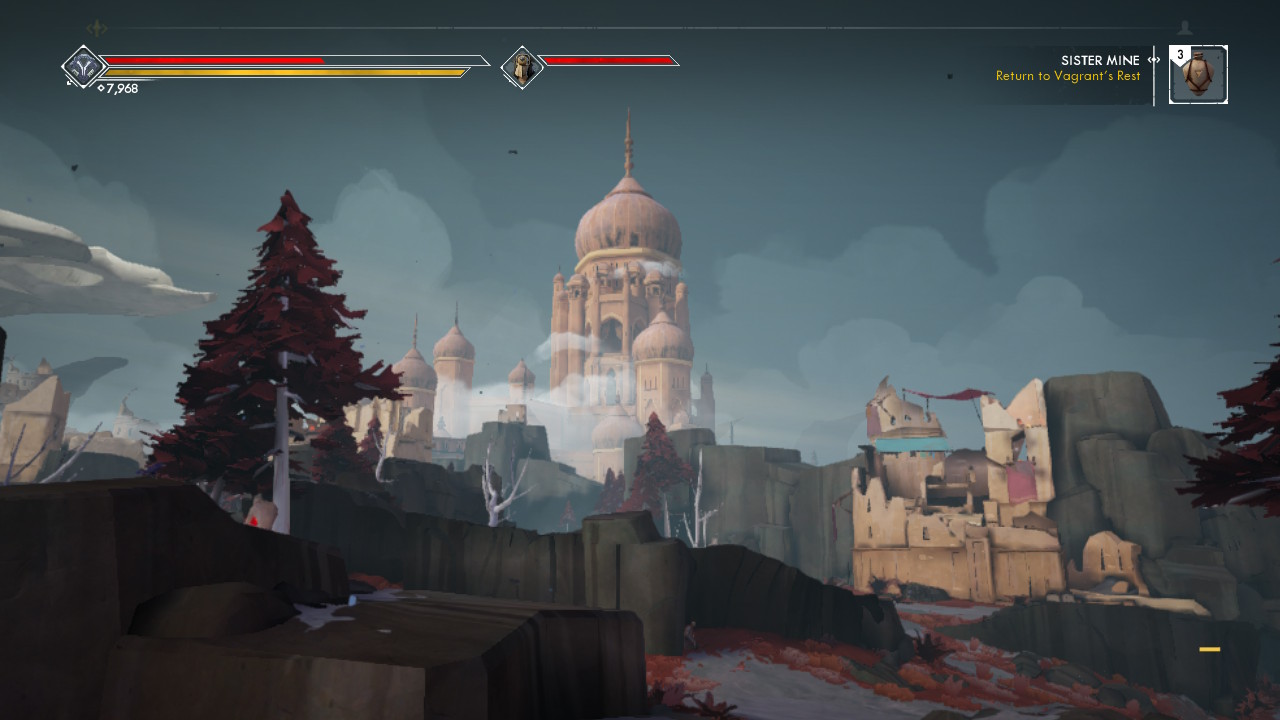 From a technical perspective, Ashen looks and sounds wonderful and also runs well on the Switch. The developers have chosen to use a simplistic polygonal art style, but it works well for the tone of the game while looking great on the small screen. The voice acting for the NPCs and narrator is well done, and the sound track is beautifully atmospheric, adjusting promptly and properly to what is going in the heat of the moment. I occasionally saw a few instances of pop-in, but nothing experience-breaking. The biggest technical issue during my time with the game was the online co-op. You enable it in settings, create a numeric sequence and then share it with your friend, and then they are supposed to be able to join you either by creating a new game or meeting at a Ritual stone. (In truth, Ashen requires both co-op players to have completed the same amount of boss fights if they should wish to meet up within the game world, and they are always disconnected from each other when entering town. The game communicates none of this. -ed) After trying several times, I gave up- it should really just be an invite system to someone on your friend list. 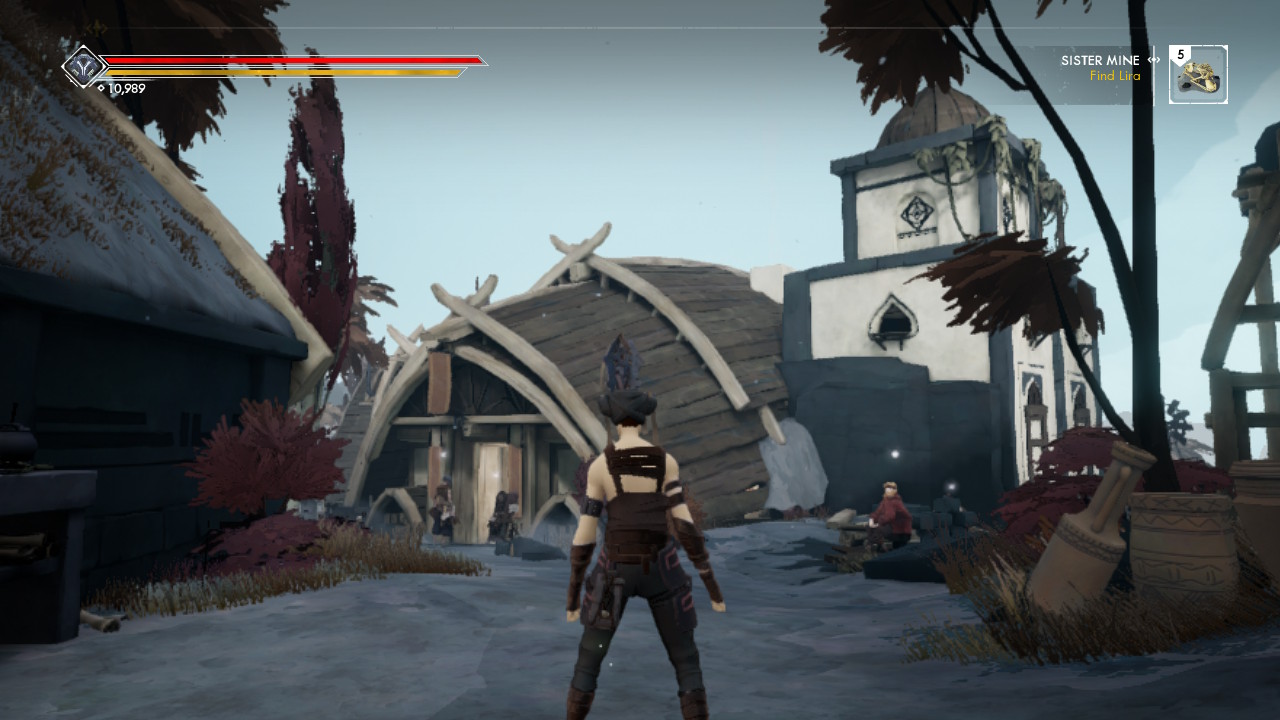 Overall Ashen has been a fun and rewarding experience, albeit sometimes frustrating. As I mentioned previously, I have never really been the type of person to take to the Soulslike genre, but there was something about Ashen that intrigued me. The first of my three biggest issues with the game is the multiplayer, which was a cumbersome experience that could stand to be refined and streamlined. Second, I would have liked to some more variation in the design of the quests, as all of them were either fetch quests, or journeying to kill a target. Lastly, while I like how your base changes and evolves as you progress through the game, it feels rudimentary and lacking an interactive element. While the asking price of Ashen and the few issues I have pointed out may scare off some potential adventurers, Ashen is still a fantastic title, offering an experience between 20-30 hours. The developers have done a wonderful job porting this Zelda-like Souls experience to the Switch, and it is a must-play for fans of either series. There is plenty to explore in this vast open world, and I can’t wait to see where the developers go next.