Who is the greatest RPG villain? To many RPG fans who grew up during the Super Nintendo era, you need look no further than the main antagonist of Final Fantasy 6 (FF6): Kefka. Despite first appearing over two decades ago, this maniacal clown remains one of the most recognizable and beloved RPG villains in the history of the genre. Today, we’ll explore just what makes this terrible excuse for a human so effective as a big bad and so memorable in the minds of RPG fans around the world. 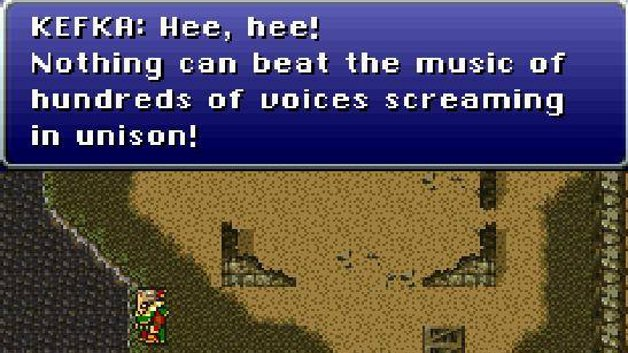 One of the most memorable things about Kefka has to be how truly horrible he is throughout FF6. This is not a villain that can claim to be misunderstood. He does not have some grand ambition or noble end he is pursuing with ignoble means. He is not being manipulated by some higher power. Kefka is an unapologetic bastard, through and through. From controlling Terra with a mind control device and poisoning the population of Doma, all the way through the genocide of the Espers and near-destruction of the world, Kefka remains consistently evil and cruel from the very earliest scenes of the game.

Kefka’s motivations are pure and unadulterated, which makes them impactful on the player. He desires power and status for himself, looking to subjugate all who stand before them, whether they be generals, kings, or commoners. Through this, we get an increasingly terrifying villain who will use any means necessary to accomplish his goals, whether it be through trickery, violence, manipulation, or betrayal. Kefka poses both a physical and psychological threat to the heroes, pulling on both their hopes and fears to accomplish his ends. And in this, he succeeds, right up to the end.

But this one aspect – the pure evilness of Kefka – does not alone make him a great villain. For that, we have to look beyond his morality and take a closer look at his overall character. 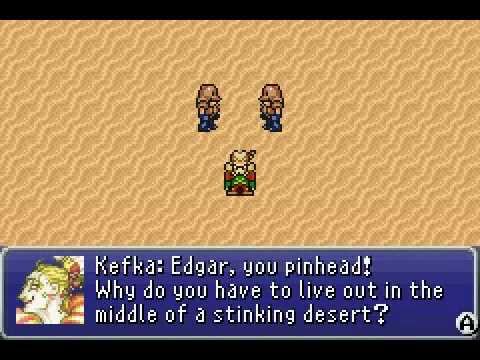 They say the best villains in all of fiction are the ones that you love to hate, and Kefka certainly fits that bill. For all the misdeeds and atrocities Kefka leaves in his wake, his comical personality and fiendish banter can’t help but entertain. From his first introduction outside Figaro, the player sees just who Kefka is – a whiny, disrespected, and evil little maggot, who nonetheless strikes fear in the hearts of his underlings. This dichotomy between Kefka’s personality and his power and position within the Empire creates a wonderful backdrop and adds layers to what could have been a flat, uninteresting villain.

The developers of FF6 took Kefka’s comical presence one step further, of course, making this evil court jester not at all funny in-universe. The players may find him charming, with his bad puns and self-inflated wit, but the characters in the story at best only tolerate Kefka’s quirks, while mocking him behind his back. No one in the universe is laughing at his antics, whether paired with his atrociously evil actions or not. The player, meanwhile, is given a front row seat to sit back and laugh at the absurdity of it all.

Kefka’s horrible actions, combined with absurd demeanor, also works to undersell his status as the big bad. First time players, with no knowledge of FF6, may assume that Kefka is the comical dragon to the more serious and looming threat of the Emperor. Kefka’s betrayal of his ruler, then, may still shock newcomers, as does his ultimate rise to power, becoming the horrible threat to the world and one of the most successful villains in Final Fantasy history. 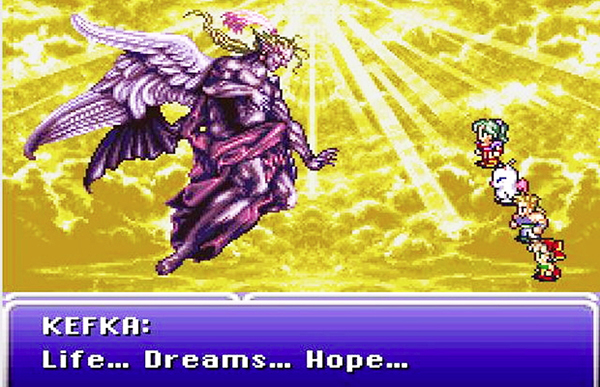 Perhaps one of the most unique aspects to Kefka’s character is that he, like the main characters, is on a growth arc throughout the story. While the heroes are busy learning the secrets of the Espers, gathering magicite, and building their strength, Kefka is doing so as well. At the beginning of the game, Kefka fights the players multiple times, sometimes being defeated or even running away when he can tell he’s outmatched. As the story progresses, so does Kefka’s power, and he slowly grows from being an ill-trusted lieutenant, to the Emperor’s right-hand, to a veritable god among men.

Kefka does not fit the usual villain cliche. He isn’t an all-powerful mastermind who throws increasingly powerful minions at the players. He never underestimates their abilities or gives them a chance to escape. He always makes the cruelest and most efficient move he can think of in any situation, and if he can think of nothing, he runs.

This formula is a breath of fresh air in a series of RPGs that repeatedly falls into the opposite, more standard trope. In Kefka, we have a villain who grows and evolves as the story progresses, while still remaining as reprehensible a person as he is at the start. Having seen what an evil bastard he is at the beginning, the player can only quake in fear as Kefka acquires more and more power. We saw what he did as a simple magician, what will he do with the power of a god?

He will destroy the world.

By the time you reach the end of FF6, Kefka will have successfully torn apart the lives of almost everyone on the planet. In the end – assuming the player has recruited all party members and completed all side quests – the heroes stand before him unbroken. Despite the destruction of the world, the death of friends and loved ones, and the slow decay of all that they know, the heroes stand before Kefka tall and proud. Through all these trials, they have achieved self-actualization, overcoming their faults and fears and standing before him ready to die to save the world.

And that, perhaps, is the reason Kefka is such an amazing villain. He put the heroes of the story through every tribulation imaginable, and they came out the other side stronger for it. In this, Kefka achieves the ultimate goal of any antagonist – driving the heroes towards change. He accomplishes this while being loathsome and entertaining through and through, and by this, stands as one of the greatest RPG villains of all time.

Kefka is my favorite Final Fantasy villain, and arguably my favorite RPG villain or all time. Well done article, fun to read, great way to explain why 6 was so much fun to people who haven’t ever had the chance to play.