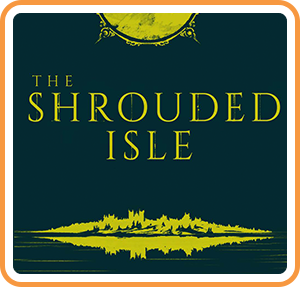 There are some things that will never lose their appeal- ninjas, zombies, Smash Bros., and eldritch horror, to name a few. The last of these has been implemented into all sorts of media- books, movies, and even video games. Who doesn’t love a bit of cosmic, unknown terror in their life? The Shrouded Isle seeks to bring a little slice of this directly to your Switch. The mystery and dread that accompanies this moody civilization simulation is very nice on the surface, but is its gameplay deep, or insanity inducing? 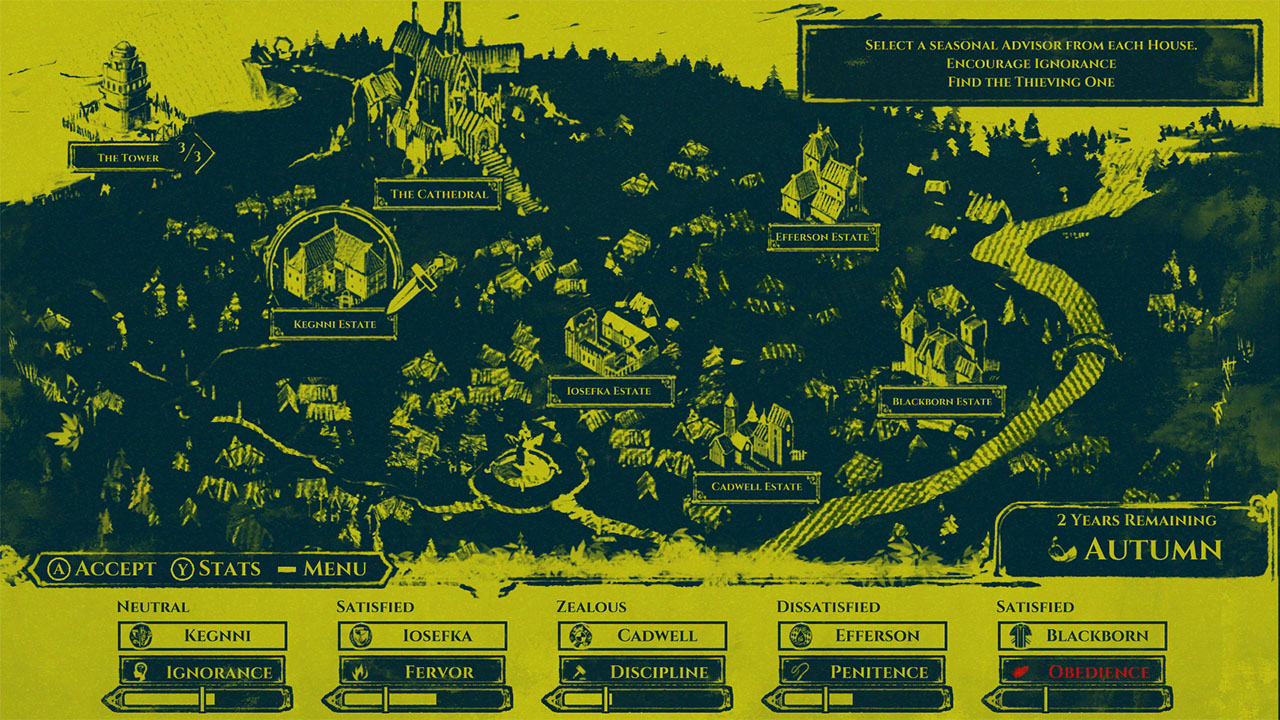 As its genre implies, The Shrouded Isle seeks to place players into the role of a high priest serving the will of Chernobog. In an attempt to prepare for Chernobog’s arrival in five years, the high priest seeks to keep the people of the Shrouded Isle faithful to Chernobog in all the right ways, namely: ignorant, full of fervor, obedient, disciplined, and penitent. The player must pick advisors every season from each of the five major houses in town to perform a certain task in order to ensure acceptable levels of these five traits. At the end of a month, one of these advisors is then sacrificed to appease Chernobog, because hey, why not?

Sounds simple enough- or maybe it doesn’t. Each of these major families are comprised of individuals possessing their own specific vice and virtue, which can help bolster the performance of their task and risk the stability of others. Before entering into a season, comprised of three months/turns, the player can inquire about the qualities of their potential advisors. While some characters will already have a vice or virtue hinted at, there are others the player will have no knowledge of. This is a major aspect of the gameplay in The Shrouded Isle, with a lack of knowledge and well-established characters offering specific sorts of benefits. 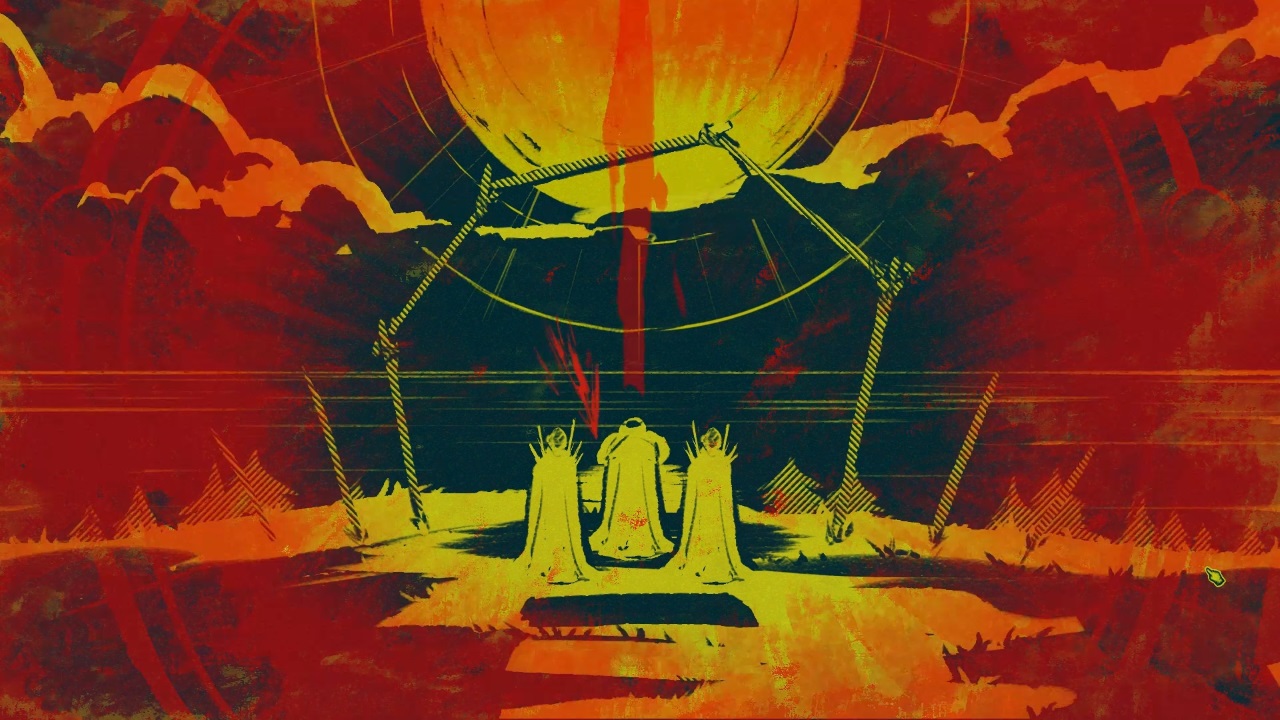 There are three tiers to understanding a character’s vice and virtue: the first is a complete lack of knowledge, which will have no positive or negative affects upon their task. The second is having a rudimentary or unclear understanding, which hints at what trait their vice or virtue will impact. Upon having rudimentary understanding, the advisor’s revealed vice and/or virtue will impact the five traits if they are selected to perform their duty during a season. It is fortunate, then, that inquiries can also be performed during seasons in order to react to this knowledge upon its discovery, which can lead to the third tier of understanding. Once a second-tier vice or virtue is inquired upon again, it will be revealed in full. While knowledge of virtues are always nice, vices present the highest risk, as they can either be major or minor and thus affect the townspeople more or less should that character be sacrificed.

One family member in charge of enforcing obedience may believe they are haunted, giving them a huge boost to ignorance, but they also might be too young to perform their duties, which detracts from discipline. Therefore, selecting that member to perform their duty will result in their duty – obedience – and their virtue of ignorance – both rising, but discipline will fall. Players can select up to three advisors a month in order to attempt to balance this equation out, but each additional advisor will negatively impact favor, which is a whole OTHER aspect of the game.

Long story short, the player needs to make sure they remain in good favor with each family while also meeting acceptable levels of each of the five traits. To further complicate things, Chernobog will visit the player in between months and ask for a specific trait to rise to even greater heights, while also demanding that one specific advisor with a specific trait be found out and sacrificed. The family members can also become afflicted, turning their normally-positive virtue into a vice, and will spread their affliction if not quarantined and purified at the shore-side tower. These are third-season gameplay complications, however, so you won’t have to worry about them right away.

Oh, and the game doesn’t explain any of this. 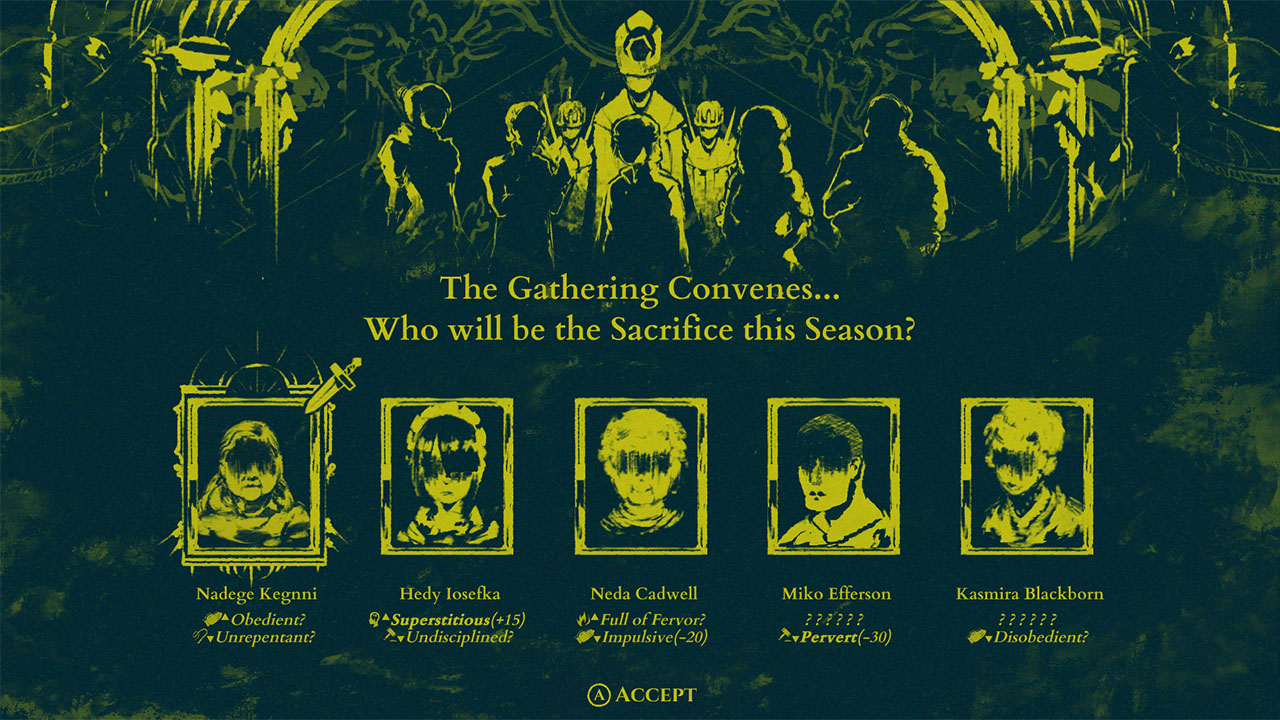 The Shrouded Isle enhances its dreary and maddening atmosphere with a color palette that relies upon a primary dark color with a few other sparing sickly shades in order to give detail – in other words, although its presentation is simplistic, the mood is definitely and effectively communicated. Each family member’s character portrait is detailed enough to display their age, expression, and any other particularly grisly features- the heads of each house will appear as full-figures should they randomly decide to stop in during a season. Each month, the family duties are depicted with a simple picture and effective sound effect, further enhancing the horrifying environment. There are few animations or alterations otherwise, which makes the randomized events and tower interactions stand out all that much more. When purified, the cages that quarantine house members are dunked into some strange liquid that might be water, accentuating the cruelty of the act. After a few purification attempts, house members can also become awakened, taking on freakish and otherworldly features that are unique for each character portrait.

There is no voice acting to speak of, and most of the results and scenarios presented are done so through text. The writing is excellently done, once again enforcing the twisted logic and morbid events that unfold throughout each playthrough. The character descriptions are brief and show some level of bias from the high priest avatar of the player, though much of this dialogue is superfluous, as the character vices and virtues, which are single words, are the most important bits of text to note. Still, the responses from the high priest show a cruel and single-minded devotion to Chernobog in a way that is very engrossing. Each random scenario, as well as the regularly scheduled scenes, are lovingly portrayed with the game’s haunting art style, framed carefully to accentuate the oppressive theme. The music is minimalist, both unoffensive enough to fit its role as elevator music between turns and punctuated with enough string scratches in order to further push the macabre setting. 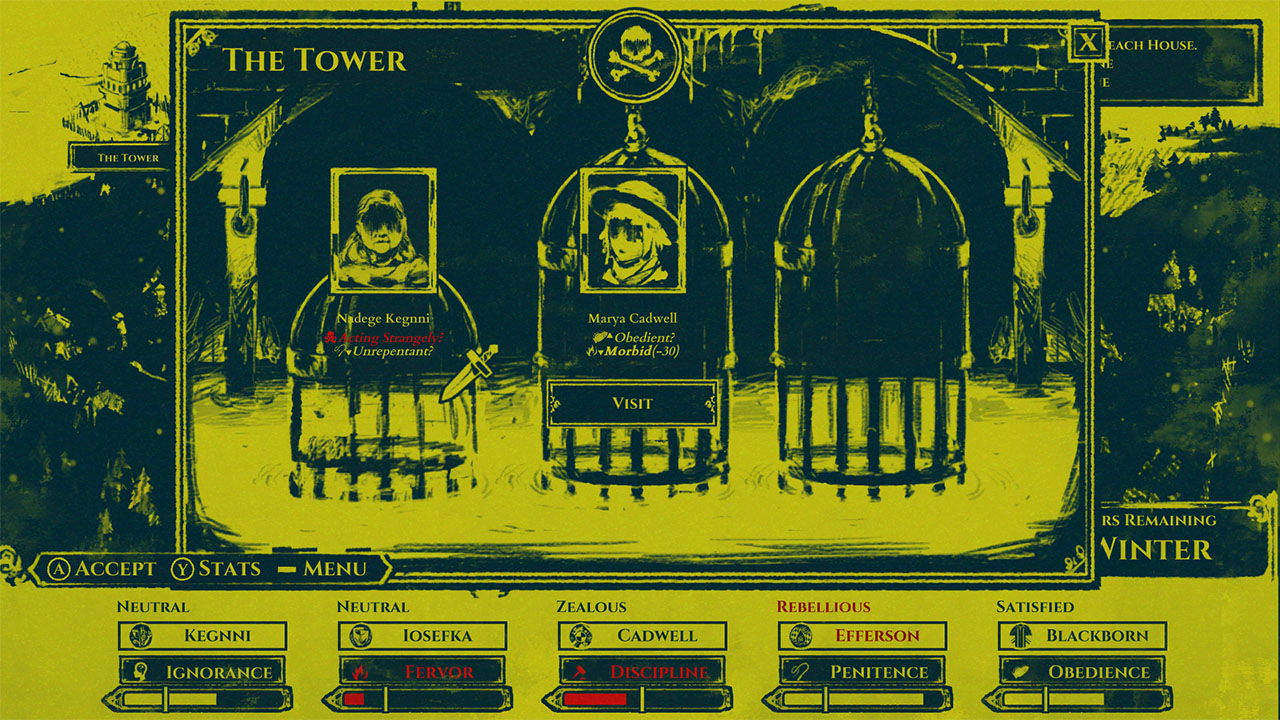 Unless you are fortunate enough to read a tutorial or perhaps this review, you will enter into The Shrouded Isle reading a whole lot of flavor text and making even more stupid decisions. Simply put, the game does little to tell you how exactly to accomplish your goals, though a few rounds of trial and error will likely get you to a point of relative understanding. After that, you’d better strap in for the old roulette treatment, because understanding how everything works and making sure it all works properly is the entire point of the game.

I’m not saying that simulation games aren’t enjoyable, it’s just that- outside of uncovering vices and virtues, managing the five traits, and keeping each house happy- there’s not much else to The Shrouded Isle. Each house member receives randomized vices and virtues per campaign, and Chernobog will ask that players attempt to uncover specific vices as well as invest in certain traits. Whether or not the player prioritizes the wishes of Chernobog or the happiness of the town is up to them, though certain randomized combinations and specific decisions can lead to unwinnable scenarios. In other words, the Shrouded Isle attempts to blend simulation elements with rogue-lite sensibilities, but the total experience- a 20-season cycle- doesn’t have enough unique content to justify arcade-style replays. 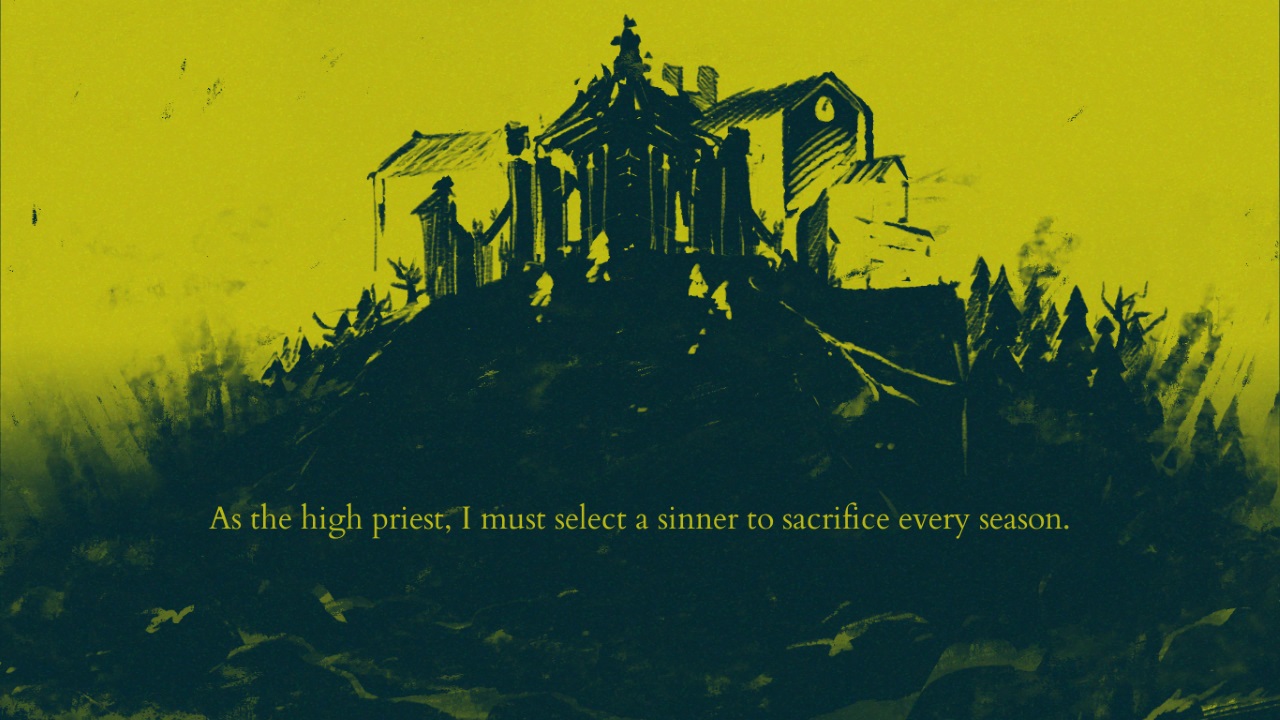 A hardcore strategist can spend lengthy sessions noting what needs taking care of and which community members will be most helpful in the long run, as well as making sure their sacrifices will be counterbalanced in the long run. There is some deep strategy to be found here, but the understanding of certain elements can only take a player so far – sometimes a house member will end up with a vice and virtue than cancel one another out, and although wild guesses can be mitigated early on in a run, players will find scenarios can snowball out of control quickly should a house possess too many rebellious vices. If they want to reach any of the seven alternate endings available, players might just have to pull a Nintendo and leave luck to god.

Whether or not you feel The Shrouded Isle is worth your time mostly depends on two considerations: the first is how much mileage you’ll be able to get out of viewing the same ten or twelve screens and playing the same style of simulation, the second being how much of your time you feel like taking notes on your video game. The game itself does very little to keep individual family member information transparent, and once you’ve learned the ins and outs of each of its relatively few mechanics, the rest of the game is attempting – and failing – to make things work out for as long as you can, with the eventual hope that you’ll get a winning combo. There are important choices to make, but the game lacks depth in characterization and variety too much for me to recommend it.

I will admit I love the art style in this one!