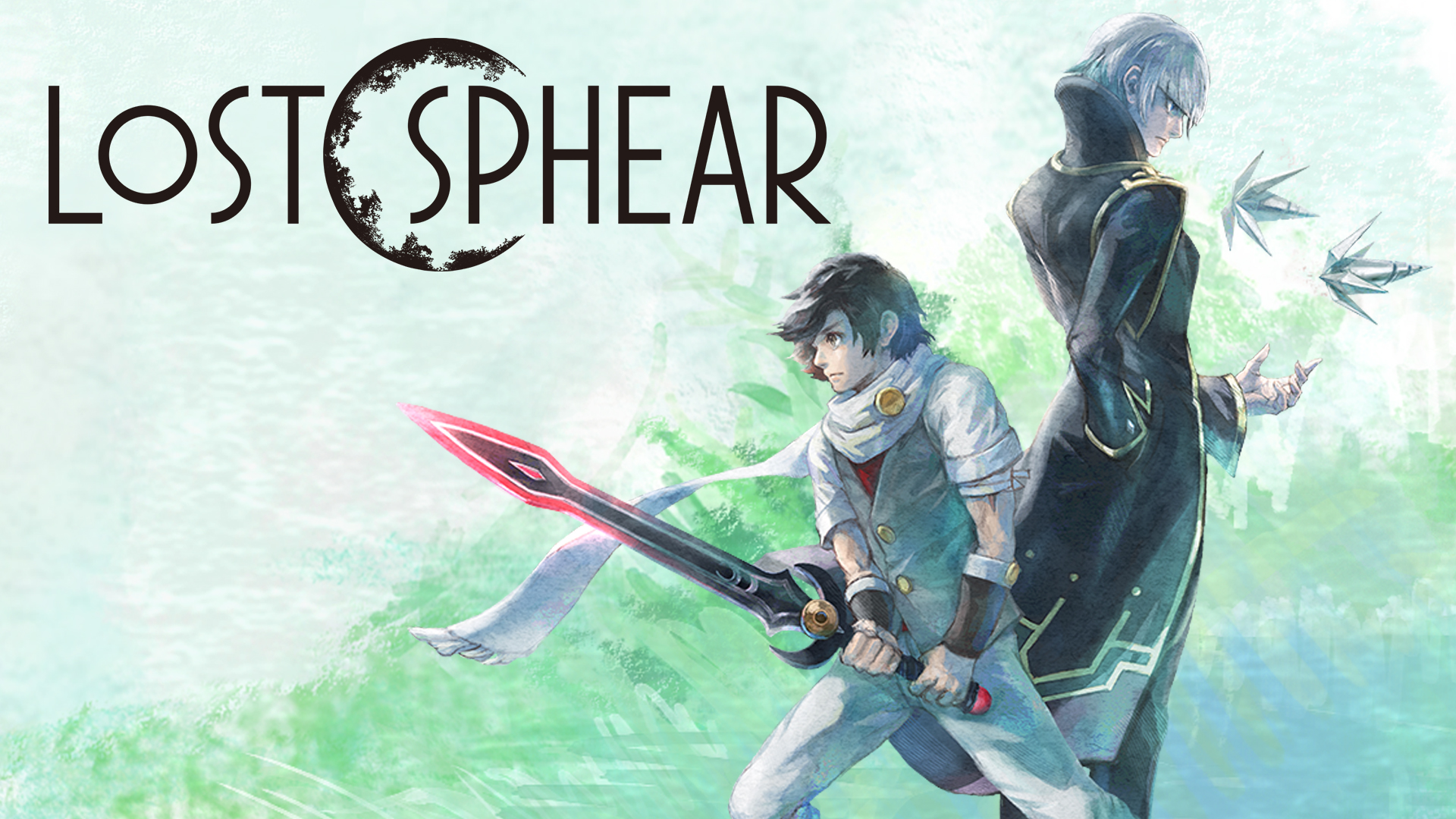 Lost Sphear is Tokyo RPG Factory’s latest stab into the traditional JRPG market. Following the success of I Am Setsuna, the new title does many things to improve upon its predecessor, at least on the surface. There are certainly those that appreciated what I Am Setsuna offered, but many people (including myself) were left a bit disappointed by the experience. Even so, I had high hopes for Lost Sphear and what it could bring to the table. But would the changes be enough to truly make it a memorable experience?

Lost Sphear follows a boy named Kanata, who has the mysterious power to bring back things that have been lost. Within his world, “lost” is the phenomena of actual matter disappearing from the world, from individual people to entire cities. In the beginning, you do not know why this happens; only that Kanata alone can restore things lost. This ultimately leads you on an adventure to uncover the truth and restore the world to its former glory.

Along the way, you meet a wide array of characters, many of them being fully fledged party members. I was pleasantly surprised by the amount of variety offered in terms of the cast. Each party member has their own traits, both inside and out of battle. While I think they nailed their diversity in combat, their individual stories leave a little to be desired.

Although each party member has some form of backstory, the majority of them don’t develop much beyond their initial characteristics. I feel that this is in part due to the overall pacing of the story. While the beginning of the game starts out pretty strong, soon you become victim of a fair amount of backtracking and asset recycling. It isn’t on the same level as FFIV: The After Years, but it is prominent enough to be worth mentioning.

On top of that, you will begin to question the reasoning behind why certain events unfold very early in your quest, as often they don’t always make the most sense. This leads to many head-scratching moments over certain subplots, whether from lack of sound logic or from their overly complex structure. The saving grace here is a pretty cool plot twist towards the end of the game. But even that particular section finds you revisiting older locations, which may turn off some people. In addition, the story continues to throw some odd and arguably unnecessary layers onto itself from there. Overall, I found myself initially invested in the universe but quickly running out of steam thereafter. 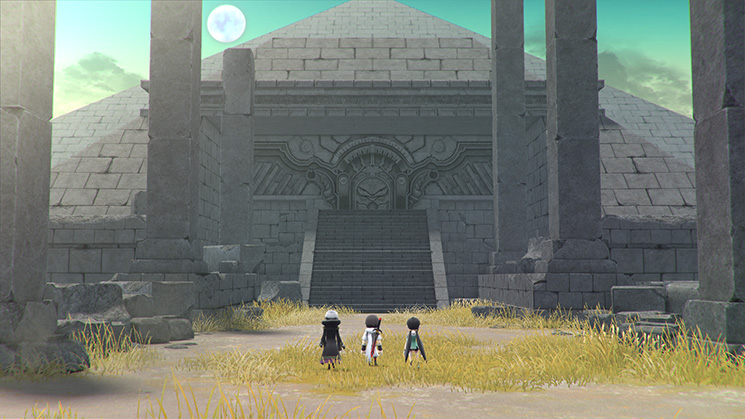 Plot issues aside, I did find myself very much enjoying Lost Sphear’s aesthetic. It is very much in the same vein stylistically as I Am Setsuna, and that in itself could be a negative to some people. The reality is that they share similar characteristics, but Lost Sphear improves on just about everything. Gone are the endless days of winter, and in its place are a wide variety of biomes and architecture types to discover. While the arguably simplistic 3d graphics may be off-putting to some, I found myself rather drawn to it. Best of all, the citizens now have actual feet instead of Setsuna’s pirate-like peg leg syndrome.

The music has also seen major improvement in comparison to Setsuna in that it features more than just a singular piano track. Most of the tunes are well done, though I do wish there would have been a larger sample size to work with. You will become very familiar with its handful of tracks pretty early on, and that may be an issue for those that don’t learn to appreciate them in the first place.

Lost Sphear’s combat further iterates on Setsuna’s Chrono Trigger-esque framework. You are now able to move your party around the field to hit multiple targets (or run away from an enemy’s attack). This was a much needed layer of complexity and makes some boss fights in particular very challenging (especially on hard). You stomp 99% of your generic random encounters, however, but that won’t be anything new to Setsuna veterans. At its core, I enjoyed the combat system in Lost Sphear…with the exception of the vulcosuit system.

Think of vulcosuits as Magitek Armor from FFVI, but not quite as cool. While the feature opens up some unique combat abilities for each character, oftentimes I found myself forgetting I even had them at my disposal. They have their uses, but it is hard to deny there isn’t a problem when a mechanic is easily ignored. I mean, what nerd doesn’t want to don a sweet mech suit and go to town? Perhaps presenting them in a different way would have made them more useful, or just fun to use.

Fortunately, the Spritnite system from Setsuna makes a return in Lost Sphear. It more or less works as it did before, but is just as enjoyable as it was in the previous title. Spritnite is essentially ability customization, and it is a pretty expansive mechanic. There are numerous abilities and modifiers to choose from, and it is up to you as to how you build out your team.

Admittedly, spritnite as a whole does feel a bit bloated here. There are some abilities and specific combinations that would likely never merit any use. I personally would have preferred a leaner, more meaningful selection rather than a vast amount peppered with questionably useful ones. Despite the bloat, there is no denying that there are a variety of ways to play. 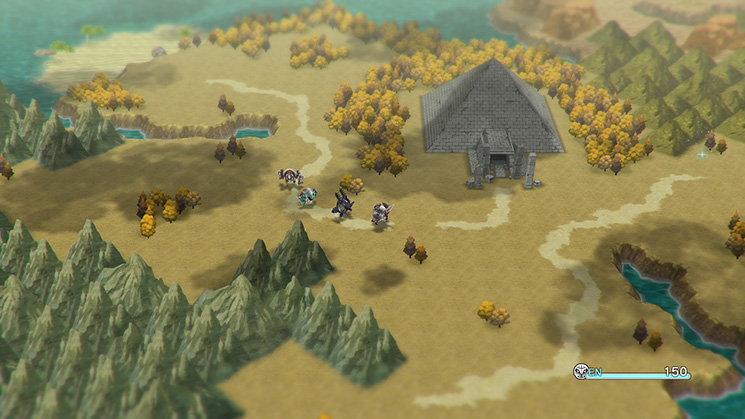 Loot progression is a staple in almost any JRPG, but Lost Sphear handles it in an odd way. You can buy and/or loot better equipment, but the game’s upgrade system kind of throws a wrench into the otherwise tried-and-true formula. Through upgrades, you can essentially use any weapon or armor throughout the entire game. Find a piece of gear that has a specific elemental modifier that really tickles your fancy? Slap it with some upgrades in each new shop and you’re good to go.

In theory, this system is interesting because you can hold on to older gear that have unique attributes and continue to put them to use. The problem is that it kills all loot-based progression, an essential component of JRPGs in my opinion. Sure, you will find equipment that has different properties and/or higher base stats, but they are often not nearly as strong as fully upgraded gear. And due to the enormous cost of upgrading components, it’s often not worth swapping to newly acquired gear simply due to the investment in fully upgrading it again. You are typically better off upgrading what you already have and going from there.

That is only factoring in a single party member’s equipment as well. When you multiply that cost by four (for your active party members) or MORE (if you deck out your entire party) the expense becomes astronomical. Lost Sphear is one of those RPGs that forces you to play certain party members during specific events; meaning you always want to keep at least a base amount of gear upgrades on every character. But given how the system works, it is a pretty daunting task. There are ways to improve your farming efficiency (ie. aurum/platinum bobb buffs), but honestly they feel more like a necessity rather than just an option.

You could argue that elemental affinities on gear bring a welcome complexity to the equipment system. Unless you are a true grinding freak (and I know some are out there!), you will likely never be in a position to take advantage of the system simply due to the cost involved. Additionally, it is easy enough to achieve elemental advantages just through using the spritnite system, further negating the need for multiple gear sets. There are only a handful of times where negative status effects can even pose a threat, and really only one or two times where it can become frustrating (I’m looking at you, Krom in the Fade!). In reflection, I think the upgrade system could have been nerfed in order to bring balance to both empowering old gear while making new pieces more exciting to obtain.

At this point, it may be difficult for you to ascertain my feelings for Lost Sphear. While it, without a doubt, improves on almost every aspect of its predecessor, it also manages to do a “two steps forward; one step back” shuffle. That particular jig is what makes it difficult to suggest, especially for the asking price ($50USD as of this review). Despite the hefty story and gear progression issues, I think this game would definitely be worth a purchase on a sale. It may even be worth the dive for some at full price, but you should be aware of its shortcomings before making that decision. Ultimately, it is hard to recommend Lost Sphear when there are games like Xenoblade Chronicles 2 near the same price point that arguably offer a much more riveting experience.

Having just finished I Am Setsuna, and rereading your review, I think I’ll give Lost Sphere another shot.