It’s no secret that I’m willing to give any FuRyu game a chance- but this lesser-known developer has just as many home runs in its catalog as it has strikeouts. I’ll sing the praises of The Alliance Alive until the cows come home, but The Caligula Effect: Overdose was a mess of ideas that, while unique and intriguing, didn’t mesh well. FuRyu is known for pulling veteran talent from across the history of the genre, and Heroland is no different.

Directed by Fantasy Life’s Takahiro Yamane (who played a producer role for the 3DS RPG), and sourcing from MOTHER 3’s producer Nobuyuki Inoue and artist Nobuhiro Imagawa for the script and art respectively, there’s plenty of experience to go around at the table. But two proud producer credits doesn’t necessarily equate to a smoothly-oiled machine, which can be seen in the way Heroland possesses a great multitude of charm and novelty that overstays its welcome long before its gameplay cycle gets a chance to become enjoyable.

Heroland isn’t a traditional RPG, though it’s built atop the foundations of one. The eponymous theme park is meant to recreate the epic quest of a band of heroes from long ago, offering a slew of dungeons and challenges where visitors can relive fabricated battles. You don’t actually play as any of them, however- your role is that of Lucky, an unassuming employee down on his luck due to an “unfortunate circumstance” on his first day of work. Lucky leads assigned patrons through theme-park dungeons in a simplistic and straightforward manner, some rooms triggering dialogue, others enemy encounters or treasure chests.

Patrons range from valuable individuals who are required in order to complete a specific dungeon, to optional side-characters who can help out. In reality, these indicators fluctuate based on what sort of dialogue the game wants to force feed you- if a character takes priority, that likely means the dungeon will feature character dialogue and interactions between those individuals, and any other party members dragged along will simply support in combat. 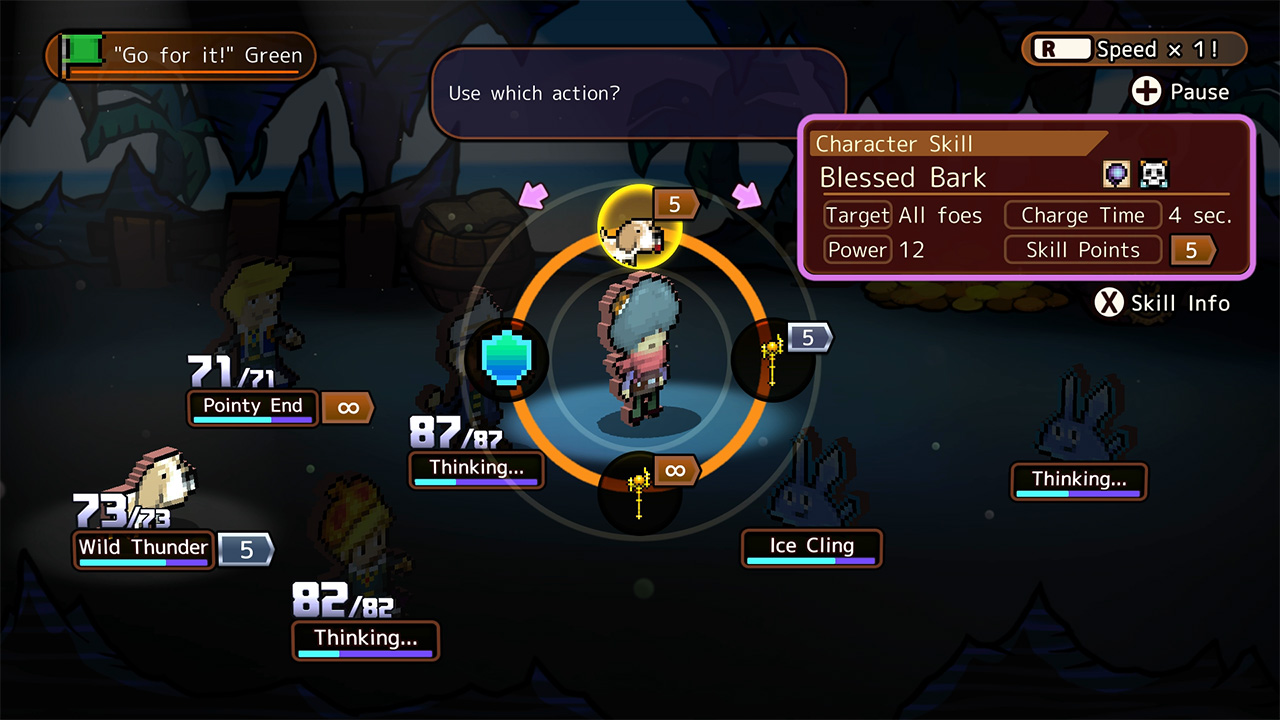 Combat in Heroland is… weird. Party character automatically attack based on AI-controlled tactics. Characters will automatically select skills and attacks based on their own fickle whims, and their targets are telegraphed by Final Fantasy XII-like arcing lines towards enemies. However, Lucky can intervene when his action gauge fills, allowing him to issue commands to a singular character or tactics to the party as a whole. Tactics are all-out, generalized commands that boil down to attack, defense, mp-based skills, or party-wide support, but commands allow you to choose pick specific attacks from patron abilities. Certain interventions are optimal for specific scenarios, and party consistency is key to success.

The issue with this system is one that plagues many RPGs in their early state, which is that actual agency of choice feels slight in the early game. The gauge for intervention commands rises painfully slow at earlier levels, but when Lucky manages to perform his duties well- that is, keeping his patrons from getting K.O.ed in dungeons- he’ll be able to improve his gauge, in addition to some other benefits. Still, the early-game is not all that amusing, from a gameplay standpoint.

While you can increase the speed of combat, this also makes the action terrifically hectic, with combat lines criss-crossing the battleground and actions being queued up at remarkable speed. While this does mitigate the slog of the early levels, it also proves a bit of an unfortunate truth about combat- it’s not all that interactive, strategic, or fun. Heroland is more of a numbers-based game than anything, with commands, equipment, and skillsets needing to be well-organized in advance if success is going to be a reality. Fortunately, Heroland is a theme park, which means every enemy and NPC is an employee, not a true terror.

They’ll meet in the staff lounge at the beginning of the day, where Lucky can scope out their abilities and best prepare your patrons for the task ahead. Preparations mean buying and equipping your patrons with props from the store, though some items can be found within dungeons. In some ways, Heroland feels more like a puzzle than an RPG. If that’s your preference, then the daily gameplay loop (the one within the game, as the park opens and closes every day) might satisfy you.

Though the MOTHER trilogy was known for its quirky art and narrative, really only one of these elements shines through in Heroland. The aesthetic design is incredibly unique, with a delightful series of pixel art characters that have been “cut out” of digital cardboard, appearing as Paper Mario-like, bouncy, bopping models. The character designs are vibrant and highly individual, but their static nature means that they animate little and are heavily reliant on character dialogue in order to distinguish.

This is complimented with simplistic, hand-drawn backgrounds that evoke a cozy feel. However, there’s a bit of visual inconsistency that occurs with character portraits, which appear to be hand-drawn (or at least, simplified) versions of character models. The blend of art styles is understandable, as the game and its narrative play out across a series of dioramas, but the character models ultimately feel out of place. 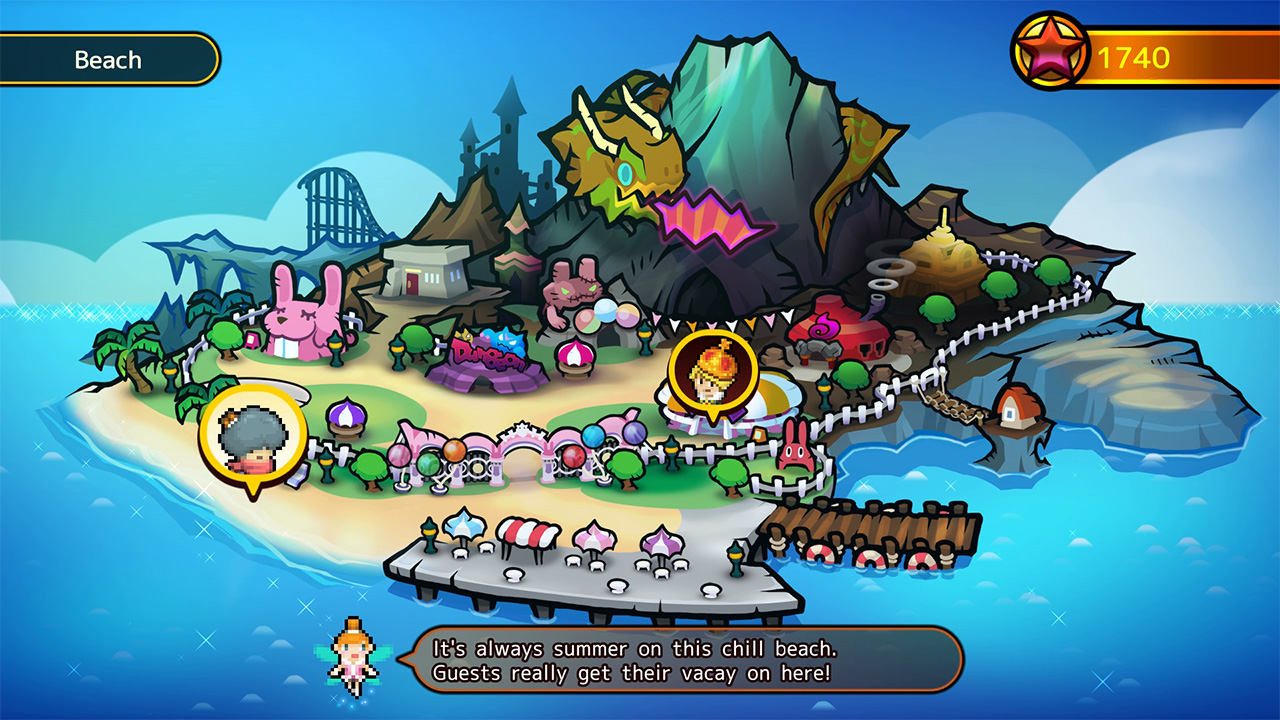 One of the clear selling points of Heroland is its quirky premise, but it proves to be one of the more irritating elements of the game. There is an metric ton of dialogue in this game, and much like Takahiro Yamane’s Fantasy Life, a vast majority of it is chock-full of character. Just like stuffing your mouth with too many sweets, however, you’ll quickly grow sick of it.

There is just too many mandatory segments of dialogue that clog the experience- valuable patrons exist as such to present statistic challenges, they are also mandatory additions to you party so that they can trigger exclusive dialogue sequences. There’s a colorful cast of characters, monsters, and… otter-people to discover at Heroland, and a number of shady businessmen and women that you’ll encounter, but there’s another element to makes the amount of dialogue more egregious- the sound design.

The character chirps that accompany dialogue are some of the most irritating I’ve heard in an RPG, and thought this audio feature can be turned down, it remains an unfortunate element of the game’s audio. Some suitably amusing tracks have parked their way into the game’s soundtrack, but they also become tedious due to repetitiveness and their use in multiple scenarios. The dungeon and battle themes are more fitting for an RPG (as they should be), but only used in a specific segment. Combat skills and spells are fortunately much more suitable and pack a nice punch, but that’s only a certain piece of this larger puzzle.

I’m not precisely sure who the target audience is for Heroland, as its simplistic gameplay may counterbalance the overloaded dialogue, but the odd thing is, despite the amount of conversation, there’s not all that much plot. Battles and dungeons are chaotic, though once you’ve seen the bizarre character designs and spell effects firing across the battlefield a few times, the spectacle becomes a bit stale. If you’ve got the stamina and are into the sort of snappy, lightning-round jokes that Heroland’s script offers, you might be able to stomach the portion of dialogue the game serves up. However, the game did not serve up the winning one-two punch I’ve come to expect from FuRyu, despite it offering a great deal of new ideas. 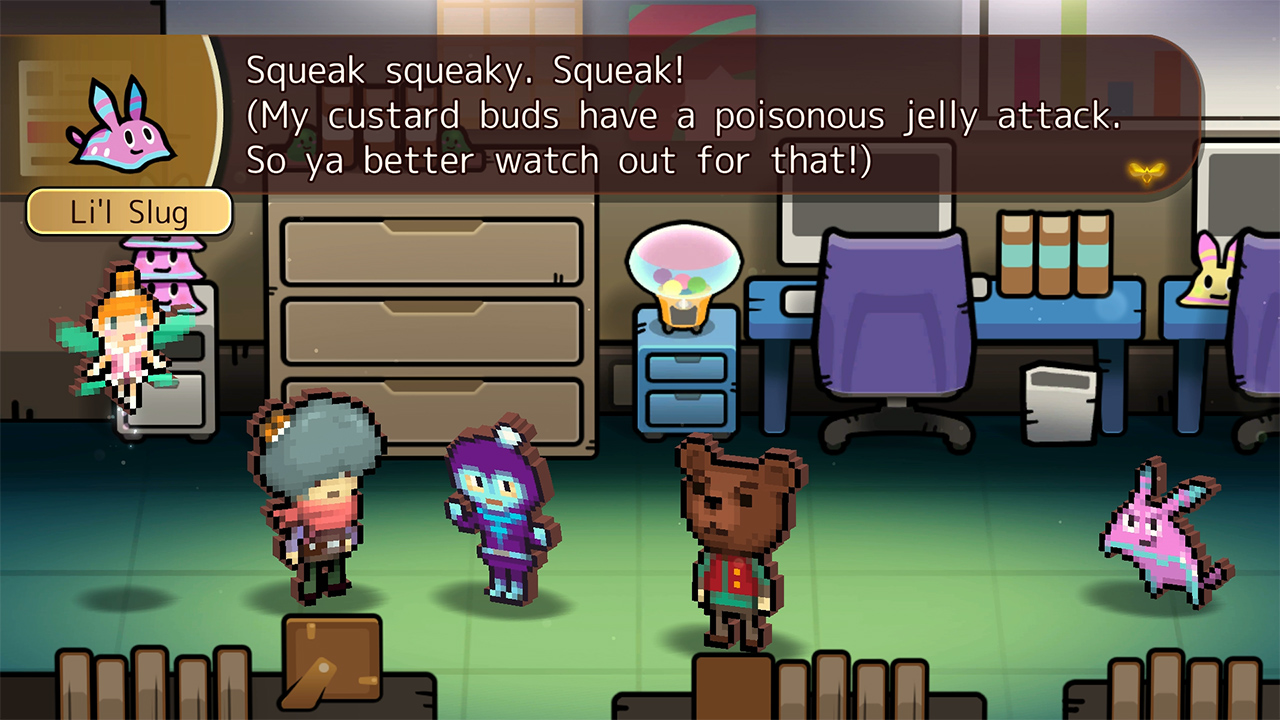 That’s the thing I’ve found with most of FuRyu’s work, however. If you are able to stomach some of the less-appealing aspects of their games, you might come to fall in love with the one aspect that is truly delightful. In Heroland’s case, however, I’m not quite sure what that element is supposed to be. Check out a video or two- if the silly script tickles your funny bone, go for it.

If the combat system feels like it’s worth the early-game trudging towards true, consistent intervention, it might be the right fit for you. For what it’s trying to do, there’s nothing quite like Heroland elsewhere on the Nintendo Switch. Whether or not what Heroland tries to do is a well-realized product, however, might still be up for debate.