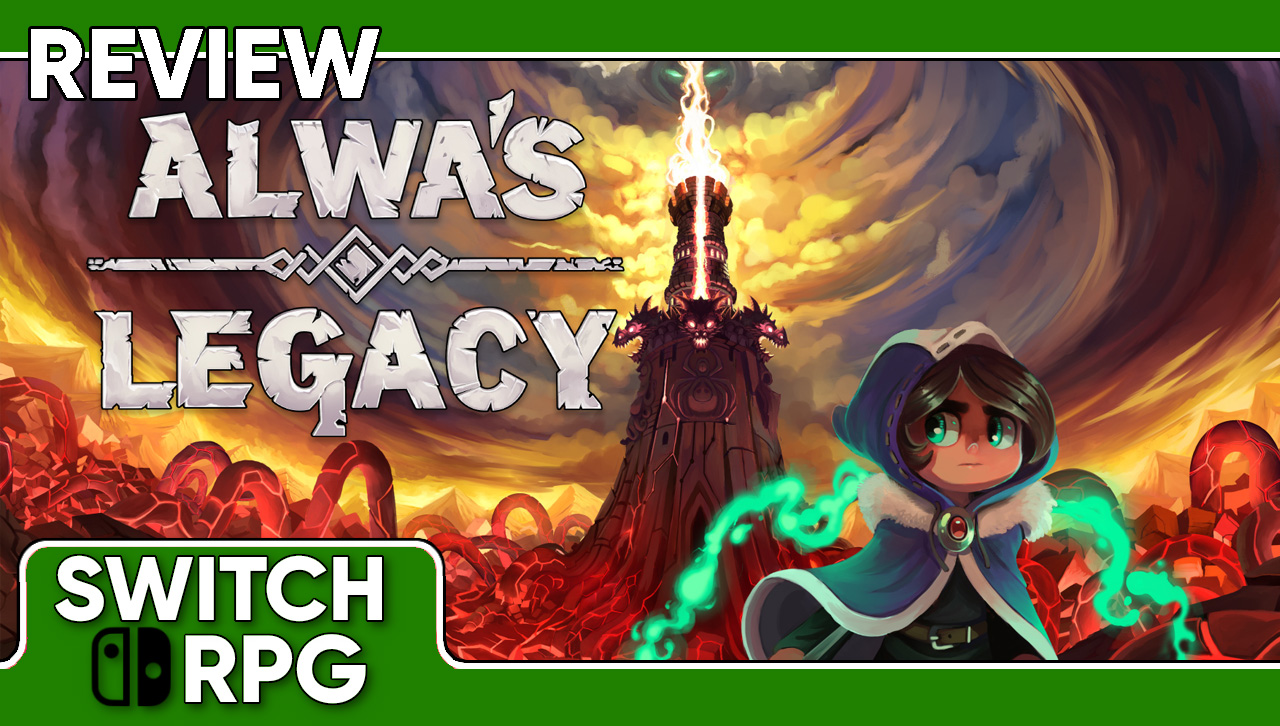 Alwa’s Legacy is a beautiful Metroidvania-style platforming game filled with puzzles, magic, monsters, and exploration. Also, lots of death. The gameplay, beauty, and captivating puzzles leave you wanting to come back for more, however, and it all adds up to be an entertaining game. This successor to Elden Pixel’s previous game, Alwa’s Awakening, has you driving the same character, Zoe, as she once again is called upon to save the land of Alwa. Over the course of the game, Zoe gains new magical abilities that better prepare her in battling the monsters of the land, and you as a player learn from each death, leading to a feeling that you are truly conquering and growing in your own skills as a player. 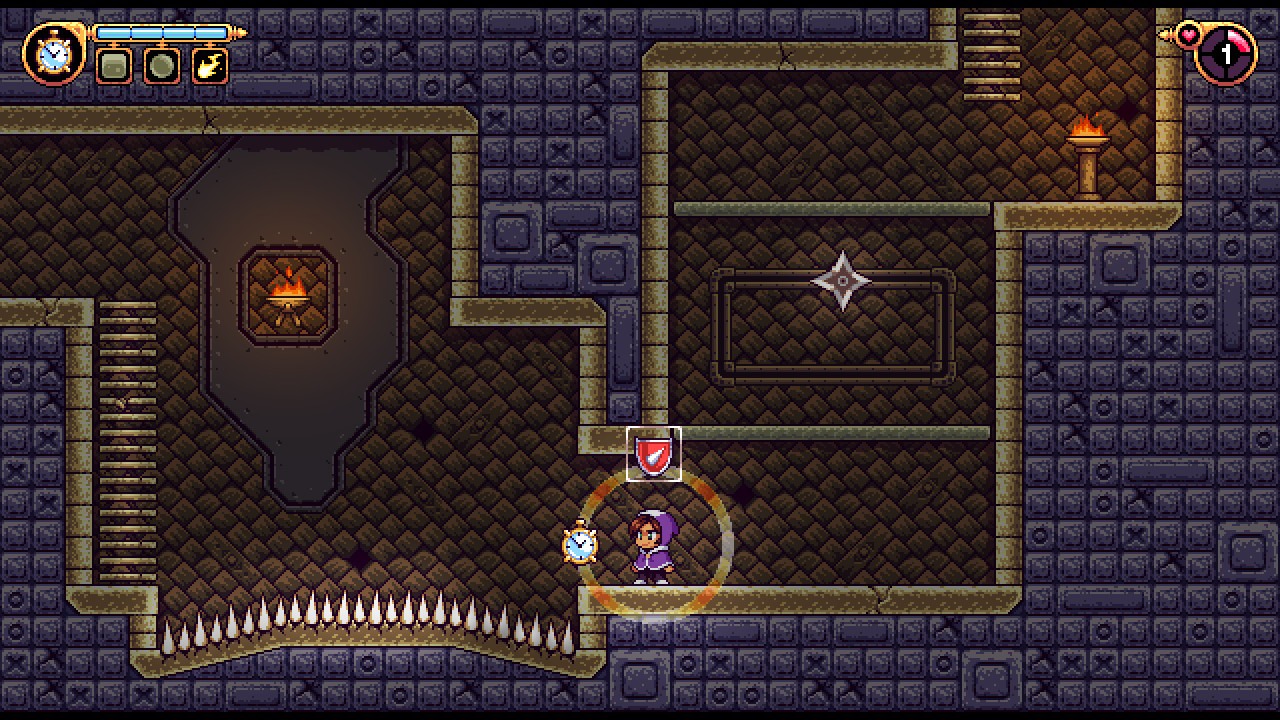 The gameplay for Alwa’s Legacy is fairly simple, as you begin with standard attacks and jumps before gaining additional abilities later. Zoe can learn how to temporarily slow down time, gain strength to smash stone walls, shoot lightning, and more, all while working through the various dungeons. Puzzles make up a large part of the gameplay, as you need to figure out how best to get past certain points not only in the dungeons, but in the overworld, as well. Several of the puzzles are incredibly unique and have the positive outcome of letting the player learn with each attempt (and eventual death) as they try to solve the puzzles, thereby gaining a little more insight with each endeavor.

Exploration is encouraged and you are not told where to go next… but you quickly realize there are several temporary dead ends until you have new abilities to be able to advance in a given direction. For instance, as you progress you will learn how to make bubbles that float up into the air which you can stand on and use to reach higher areas that were previously inaccessible. These dead ends can cause some frustration as warp points on the map are limited and also require some forethought and planning on the part of the player. Any of the scattered save spots in the world can be turned into warp points, but the item required to create the warp point (a ‘tear’) is in limited supply, so you must choose wisely before creating them. If you have chosen poorly and didn’t create a warp point near where you need to be, then a lot of tedious back tracking is required. 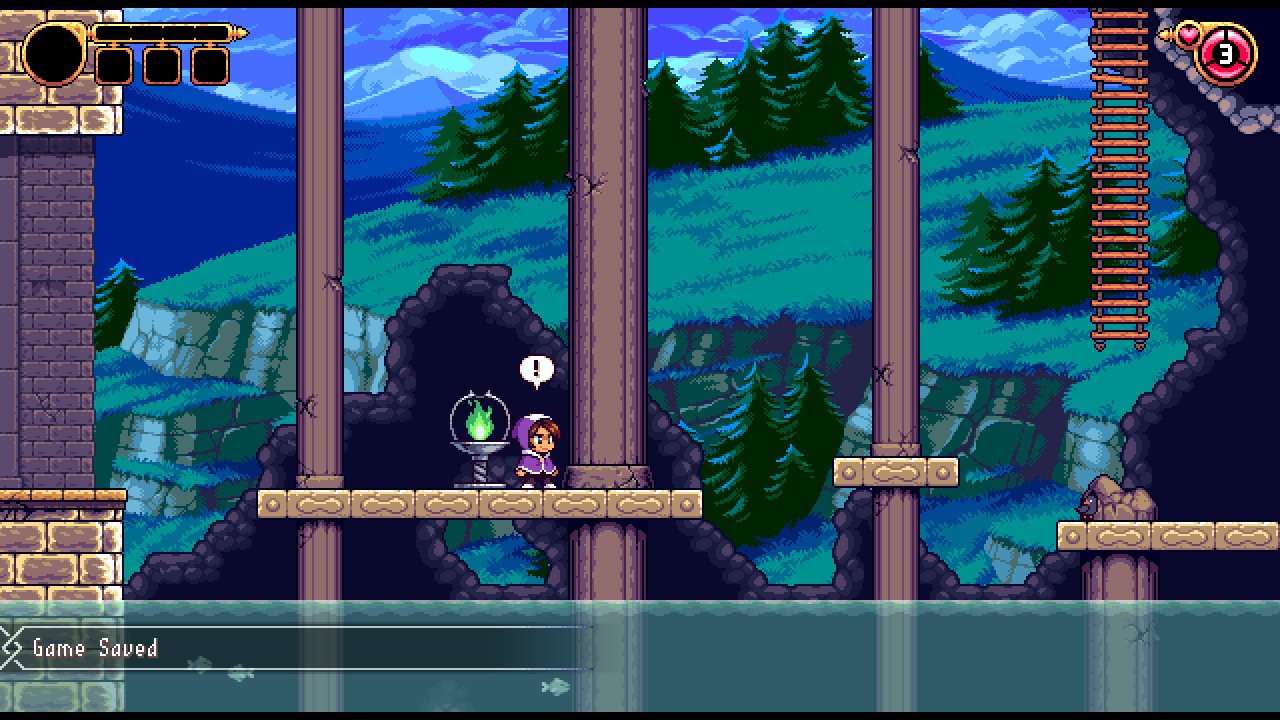 While exploring the world, you are also able to collect small blue orbs which can be traded to the wizard in town to purchase upgrades for your three basic spells. By choosing which spells to upgrade, the player is able to feel an additional sense of ownership over Zoe’s skills and abilities. The orbs are found quite frequently, but the wizard also requires quite a lot in order to purchase the upgrades, so you still have to make the hard choice of where to focus your leveling. 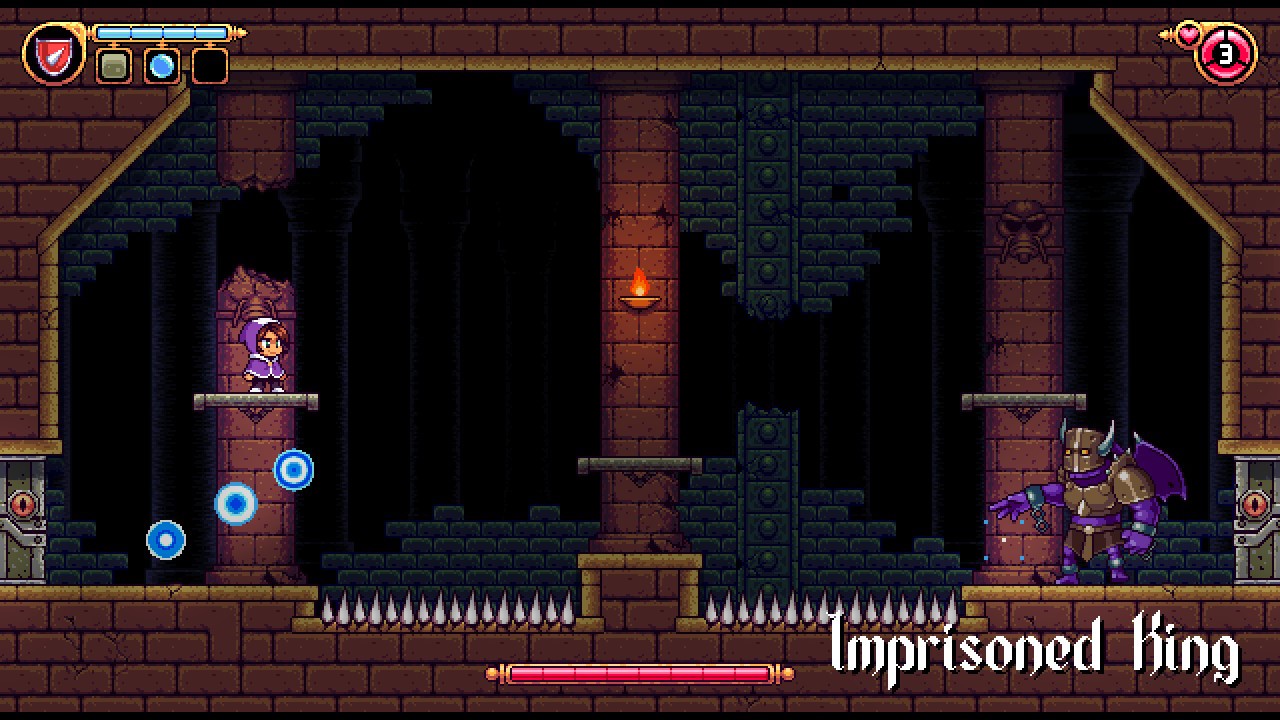 Similar to other games of this style, each dungeon has a boss with unique abilities and attack patterns. Once you learn the patterns for each boss, the fights themselves are not too difficult, and there is a health gauge for the boss at the bottom of the screen so you can see your progress as you are fighting. This also comes in handy for knowing what attacks are causing damage to these bosses and helping you to plan your attack. The battles are just challenging enough to be a fun experience without crossing over into a frustration-inducing zone. 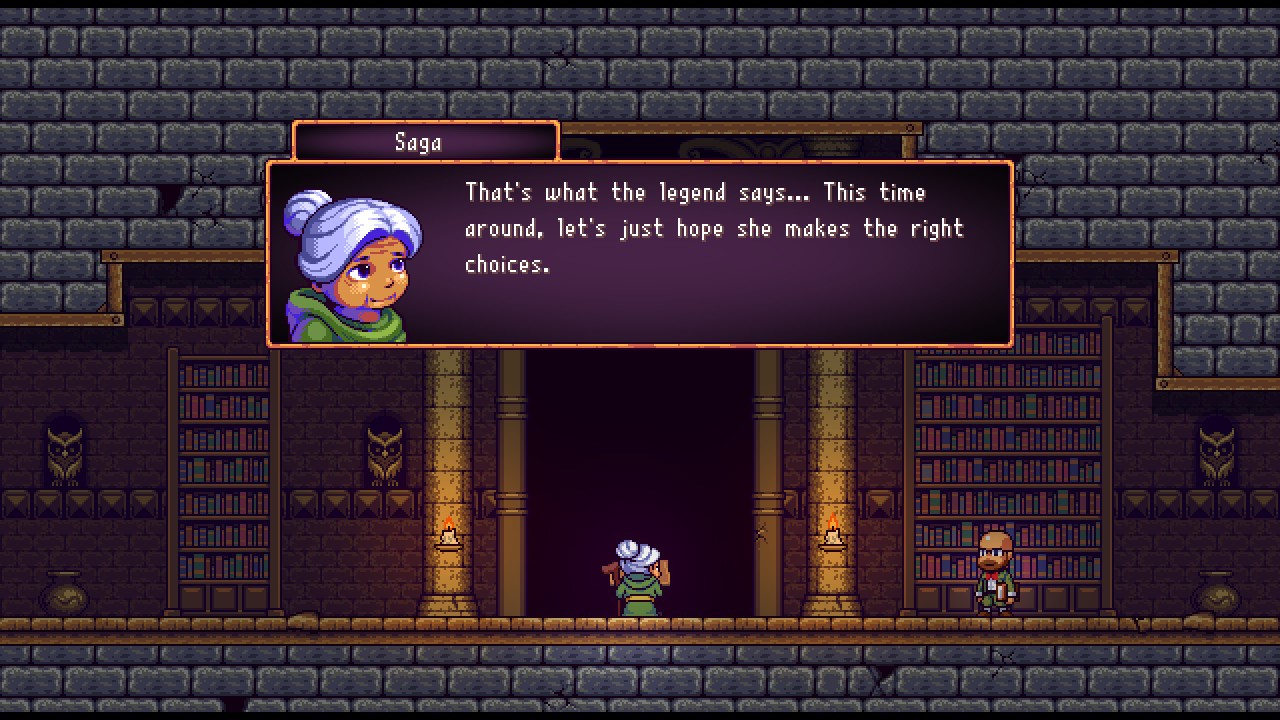 The same hero from Alwa’s Awakening, Zoe, wakes up on the shore in Alwa with apparent amnesia. Directed to see the elderly Saga for advice and direction, she is immediately interrupted by a villain trying to stop her. With little to go on, Zoe sets forth on an adventure to save Alwa and attempt to regain her memories and find her way back home. While using magic to defeat monsters and solving endless puzzles, you slowly uncover more of Zoe’s history as the blank book she is holding is beginning to be filled in with her own tale. While the narrative may be slow to arrive, the little bits you do receive here and there are enough to hold your imagination and desire to learn more. 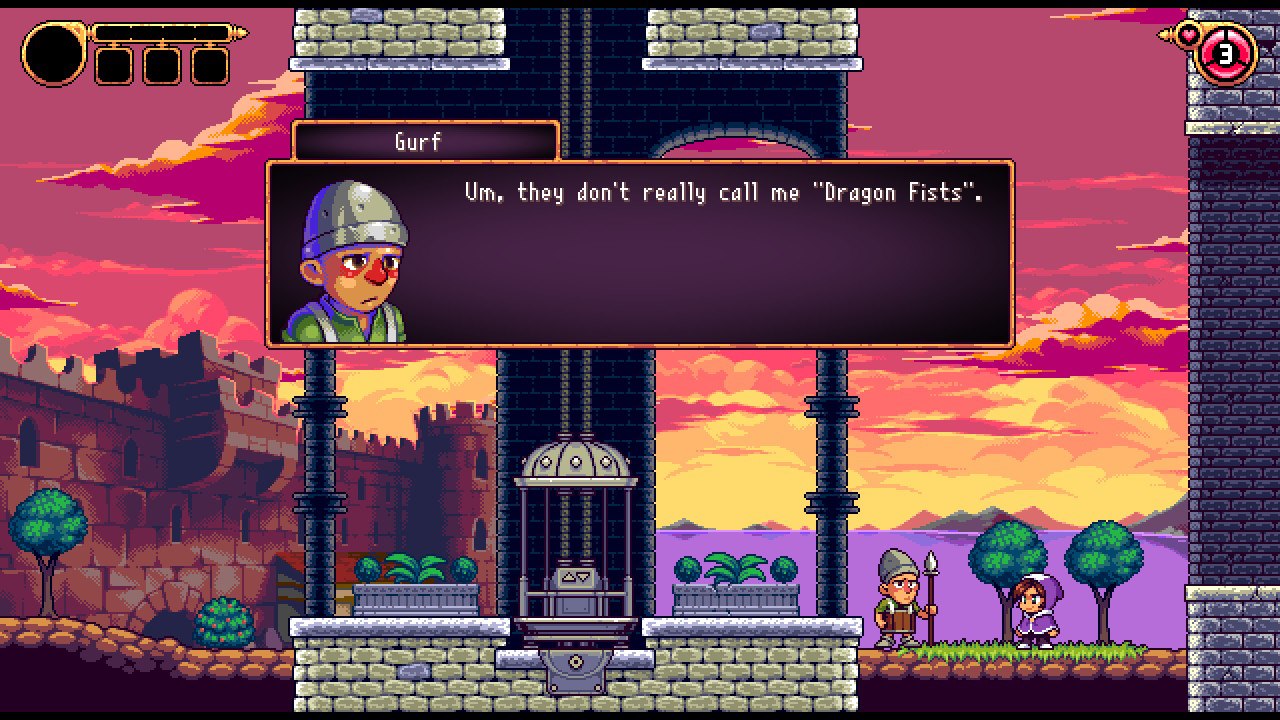 The artwork for this game is beautiful. The bright, colorful designs of the pixelated main overworld and the smooth artistry of the backgrounds and speech bubbles combine to make a very visually satisfying experience. Described by the developers as a “modern retro game”, Alwa’s Legacy has a very nostalgic feel in its artistry without being overly so. Each area or dungeon has a different theme, whether it be the darkness of the catacombs or the stony walls and various plants of the castle gardens, so the art plays a very important role in setting the scenes and immersing you into the world.

The music corresponds well with the “modern retro” style of the game, as well. While it is simple and fits the retro 16-bit video game history, it is at the same time much smoother than games of that time period and manages to be very catchy and positive. Even the death tones, which may be heard often, are a perfect subtle style that manages to not be annoying when you hear it again and again. 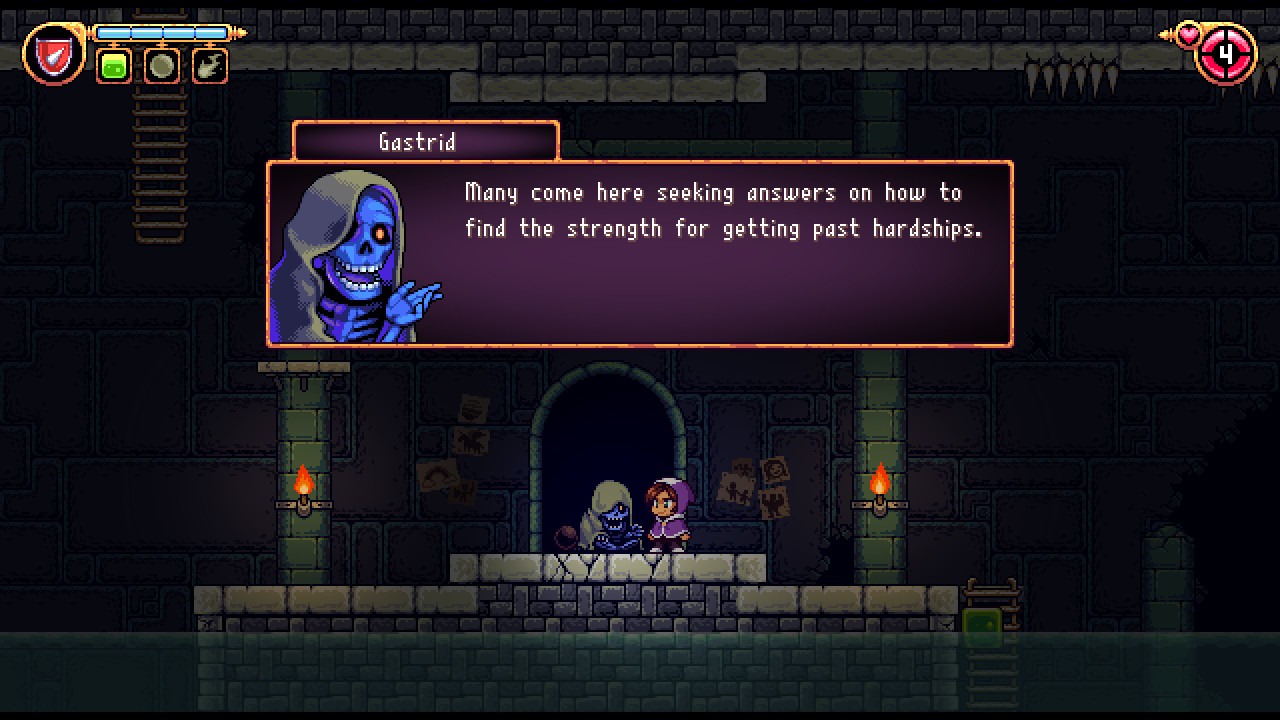 Overall, Alwa’s Legacy is a very enjoyable nod to the similar 16-bit titles of past decades and brings together clever puzzles and magical abilities to create a fun world. The story itself is clever, but not quite as deeply developed as it could have been. Still, it allows for enough of a foundation to immerse the player in the world while they battle monsters and enjoy the charming design and artistry of the environments. There is a lot of dying and respawning, but in a way that actually helps you feel that you are learning and growing as a player. While the game is not incredibly long, it feels complete and very polished with high quality dungeon design and clever characters. For anyone who enjoys this style of game, Alwa’s Legacy is one I absolutely recommend. 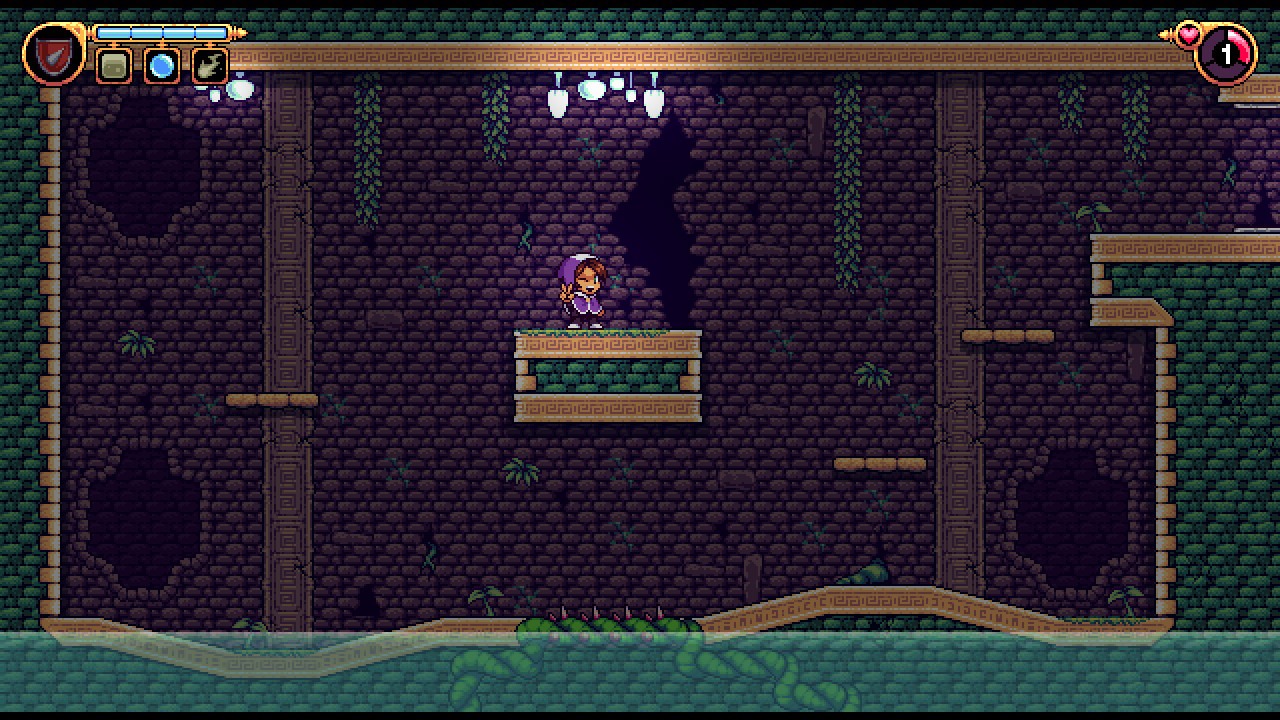