Depending on who you ask, spinoffs within a gaming series can either a good or bad thing. Games like the Witcher 3 have proven that, often times, new iterations of games within the same storyline and world can be just as good, if not better, than their predecessors.

On the flip side of the coin, you have series like Mass Effect and Dragon Age that many people would argue have been going downhill since their first couple of entries. However, when done right, sequels and prequels of games can be wonderful experiences even to the snootiest of hardcore series fans.

A typical response from your average RPG fan is that they love the Final Fantasy series, and I am no different. I grew up experiencing games like Final Fantasy II SNES and Final Fantasy VII in their prime. While I don’t necessarily think that the newest games in the franchise are bad by any means, none have really resonated with me in a long time. In fact, Final Fantasy Tactics on the PlayStation was the last non-MMO Final Fantasy that I played for hours on end.

Drawing upon my experience, you could say that I believe the heydays of the Final Fantasy series are all but gone, and perhaps they are to an extent. But that isn’t to say that I don’t want a revival back to the franchise’s core either, or that a future installment won’t speak more to me than recent ones have. In my opinion, it is sad that we’ve received so many spinoffs to the later Final Fantasy games when the majority of those haven’t really merited them in the first place. Honestly, who asked for Final Fantasy 13 spinoffs?

I could really care less about the sequels and/or prequels that entries such as 10, 12, and 13 received. I’d even put Final Fantasy IV: The After Years in the same category, and the original game is in my top 3 of all time. Again, that isn’t to say they are not decent games, but they just don’t do anything for me personally. There are reasons why I think the aforementioned games’ original iterations are maybe not the best canvases for spinoffs, but I’ll get into that a bit later.

There is one game in the Final Fantasy franchise, however, that I believe merits a true spinoff. By true, I mean one that actually does its source material justice. That game would be none other than Final Fantasy Tactics. Now you might be thinking, hey, there are at least three games in the Tactics sub-series, and you are right. But the Gameboy Advance and DS titles are not actually sequels to the original Playstation game despite taking place in the same universe. My heart’s desire is for a genuine, true spinoff of Final Fantasy Tactics to be created, and here is why I think it deserves such recognition. 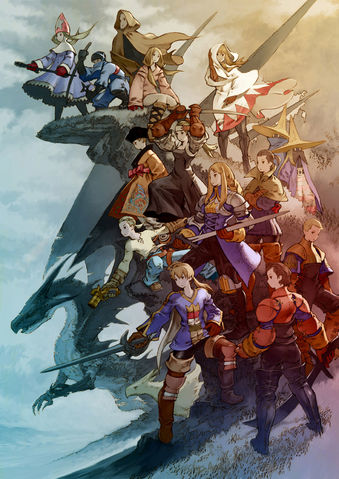 What RPG is considered complete without robust lore? Surprisingly, lore and interesting characters often take a back seat in newer RPGs in favor of flashy graphics and overly convoluted game mechanics. I feel like the last few Final Fantasies in particular have struggled with deploying genuinely interesting characters. Does anyone really care that much about Vanille? Snow? Vaan? To a lesser extent, I realize that many people adored Boy Band–er, I mean Final Fantasy 15, but even those characters spoke to me on a superficial level only.

Final Fantasy Tactics, on the other hand, is filled to the absolute brim with interesting characters and in-depth lore. Reading the entries in the in-game compendium could be a novel in itself. There is a meaningful story to even the smallest of characters within the world, and they are portrayed on the front end to an exceptionally high degree. It isn’t very often that you can relate with antagonists either, and Tactics does it so well you almost feel bad when dispatching certain foes (Wiegraf is a great example).

I think I’ve established the fact that Final Fantasy Tactics has the framework for a true spinoff, but I should clarify exactly what I would want. I feel that a prequel could easily be done on the lore contents given in the first game alone. I envision a game centered around the Fifty Years’ War, which wrapped up before the beginning of Final Fantasy Tactics.

This setting would grant further insight into notable characters such as Barbaneth Beoulve, Thunder God Cid, and even Gafgarion himself as they struggle to fight against Ordallia under the grand Ivalice banner. Cid and Gafgarion were beasts in Final Fantasy Tactics, and I believe that it would be interesting to see them in a less experienced state. I would love to see exactly why Gafgarion is dishonorably discharged from his command before living life as a sellsword. There is so much that could be done here, and I’m only scratching the surface of the possibilities. 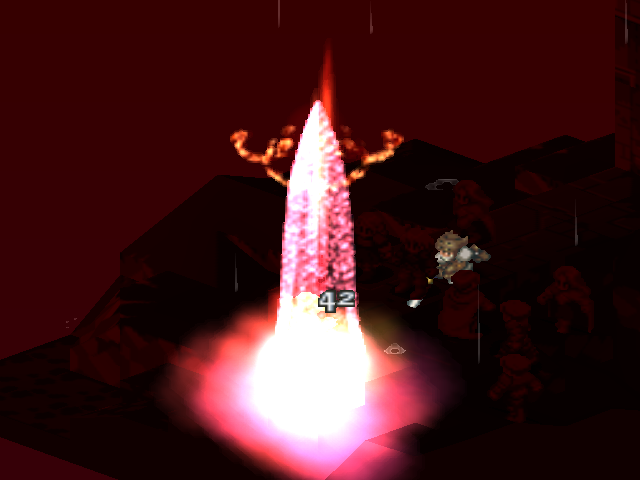 I feel like Square took a chance with Final Fantasy Tactics, as it was released right off the heels of the mega successful Final Fantasy VII. The idea of a slower paced, sprite-based tactical game may have been off putting to some that were so heavily invested in the new-age, pseudo-3d action-oriented gameplay of Final Fantasy VII. If you are young, it may be hard to envision a time where people were going away from pixel art graphics, considering it is so common these days. But in the early days of polygonal graphics, such entries were few and far between.

Retro-inspired aesthetics are likely here to stay, as they are an incredibly common sight today. Some people may find comfort in such a design as it plays on their nostalgia, while others (including myself) have just always preferred it over next generation offerings. Regardless, there is no denying that a sizeable market exists for that kind of graphic design. I could totally see a Tactics prequel donning the appearance of the upcoming Octopath Traveler and being very well received because of it. Heck, at the very least I’d even take an original Tactics remake in that design! 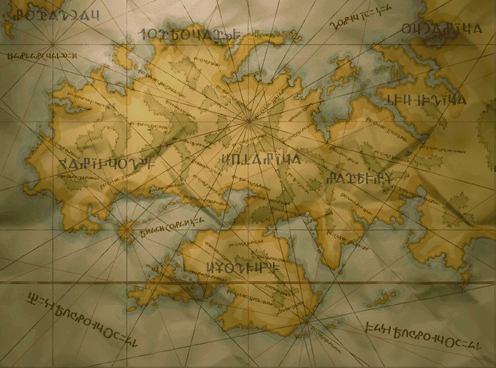 You could easily argue that Tactical RPGs are beloved these days. While the pickings may have been a bit slim in the past, new titles of that flavor are readily available nowadays. When a cracked-out idea like Mario Rabbids: Kingdom Battle does as well as it did, you know you have ahold of a popular subgenre. That isn’t even mentioning games like Fire Emblem that always perform well, as well as the multitude of quality indie RPGs that look to capture that same feeling. Simply put, Tactical RPGs are popular enough that a new Final Fantasy Tactics game would be a worthy investment. 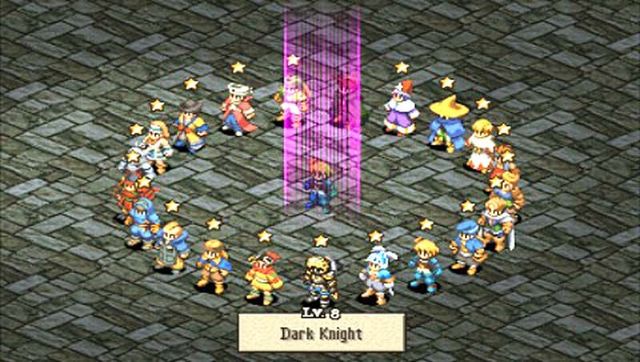 I realize that countless games have come and gone since the original Tactics that also boasted a job system. But in my opinion, Tactics had the best one. The Mage-Knight classes alone are my favorite jobs they have created, and I’d love to see what they could come up with in a spinoff game. I feel like the base system portrayed in the original game could more or less be used in the new one, with little to no adjustments being necessary. I think that the biggest thing they could improve upon would be the overall balance of each class. The Calculator and Mage-Knight classes are cool and all, but also very broken. That is a minor complaint from an otherwise stellar system though.

They Are Doing Spinoffs Anyways

Even if you don’t agree with my other points, the fact remains that Square Enix is doing a lot of spinoffs these days. So if they are already doing them, why not dig deep into that nostalgic pocket and pull out a true Tactics prequel? At its absolute worst, I see no reason why it would perform worse than any of the games in their current spinoff collection. So really guys, what do you have to lose?

The Switch is the perfect platform for such a release as well. Historically, most tactical RPGs end up on portable consoles (at least ones for Nintendo consoles). With Fire Emblem already coming to the Switch, some might think that the Tactics series may not even have a place anymore. But I would argue that it does, as multiple entries in the same subgenre can certainly coexist. Just look at past games like Advance Wars, Tactics Ogre/Ogre Battle, the handheld Tactics games, Fire Emblem, etc to support that claim. 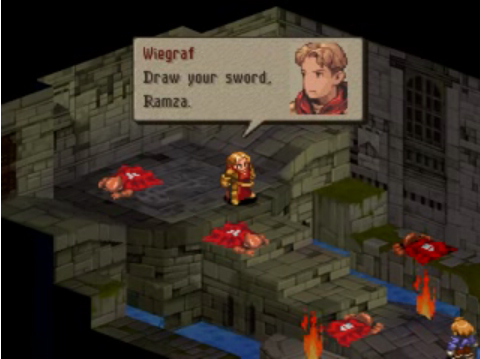 Square Enix, I’m begging you, please give us fans of your beloved Tactical RPG a proper new entry. I believe that I make a solid case as to why this would be both a good thing for fans and a success for the developers. But I would love to hear what you think as well, so let me know!

FFT is still the best FF after all of these years. Im right there with you, a true sequel/prequel would be amaxing and I’d put down good money for it!

Thanks so much for reading – glad I’m not the only one that wants to see this come to fruition!