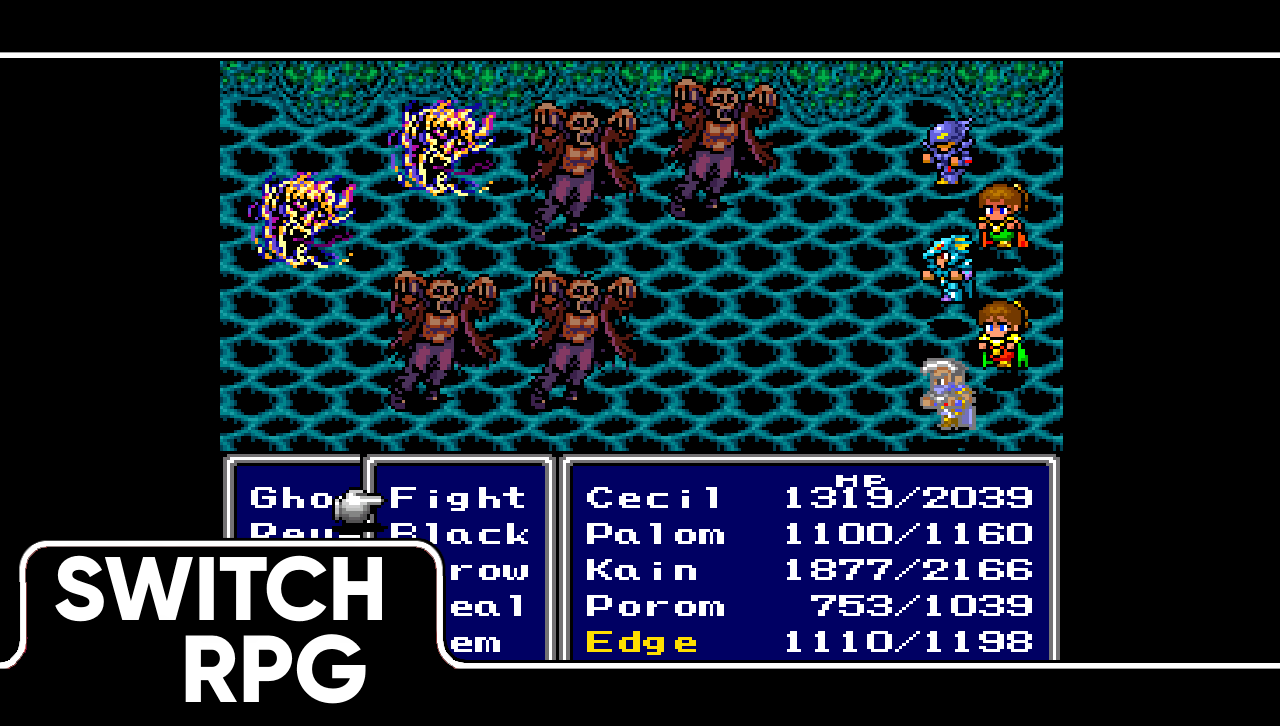 Final Fantasy IV forever holds a special place in my heart for its integral role – alongside River City Ransom – in introducing me to the RPG genre. In an era where most kids were powering through Super Mario World, I was busy renting (and re-renting) Final Fantasy II for Super Nintendo, often having to start completely over thanks to that one jerk that would take up every slot — there are multiple slots for a reason, jerk! Not that it really mattered; I was only five and could barely play the game as-is. Actually comprehending the narrative was out of the question – I wasn’t a star student by any means – so I’d have to just settle with killing all the things dead.

Both River City Ransom and Final Fantasy IV are games that I return to every so often, but I decided to approach things differently for the latter in 2020. This time, I would be playing through the PSP version while also trying out a ROMhack that appeared to have “me” written all over it. Below is a summary of my endeavor! 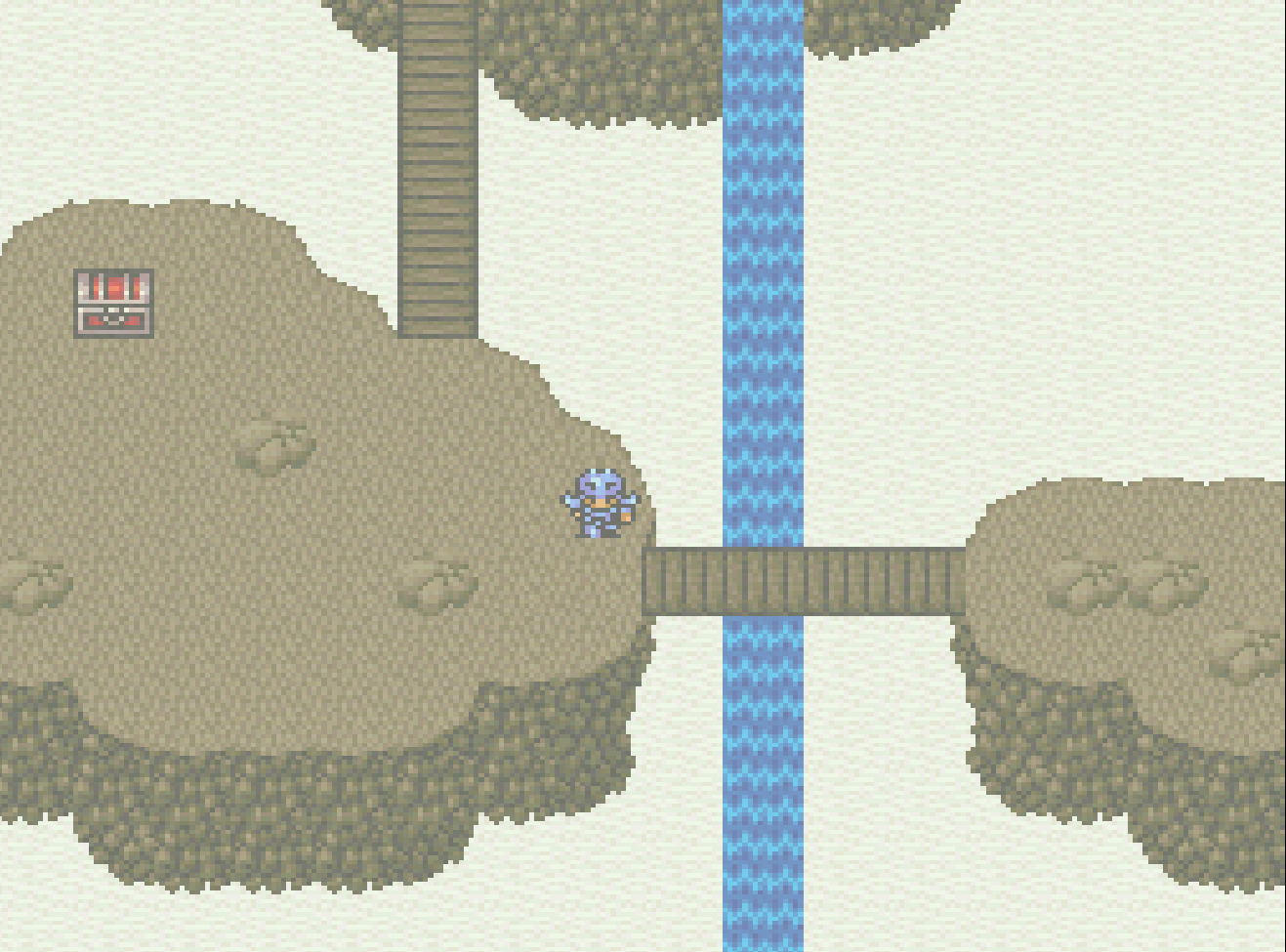 Unprecedented Crisis is a ROMhack that aims to show off the capabilities of a specific utility, FF4kster. Story-wise, it is very similar to the original up to a certain point, then opening up to a scenario-based system that allows the player to choose their final party…to an extent. What really sold me on it was a review that described it as “FFIV meets SaGa Frontier.” I had to play it, naturally, since both titles are among my favorite games of all time.

My expectations were a bit too high, however, and I should have known that scenario system would really be too big of an undertaking to expect perfection. It is only a hack, after all. Although it is neat to see each character’s narrative fleshed out a smidgen more, the problem lies in execution of the system on a technical level. Basically, each character has a short scenario that, upon completion, will either add or remove them from your party…permanently. There are no warnings beyond the presence of individual characters in certain situations, and you may not even pick up on what is about to happen until it is already too late. 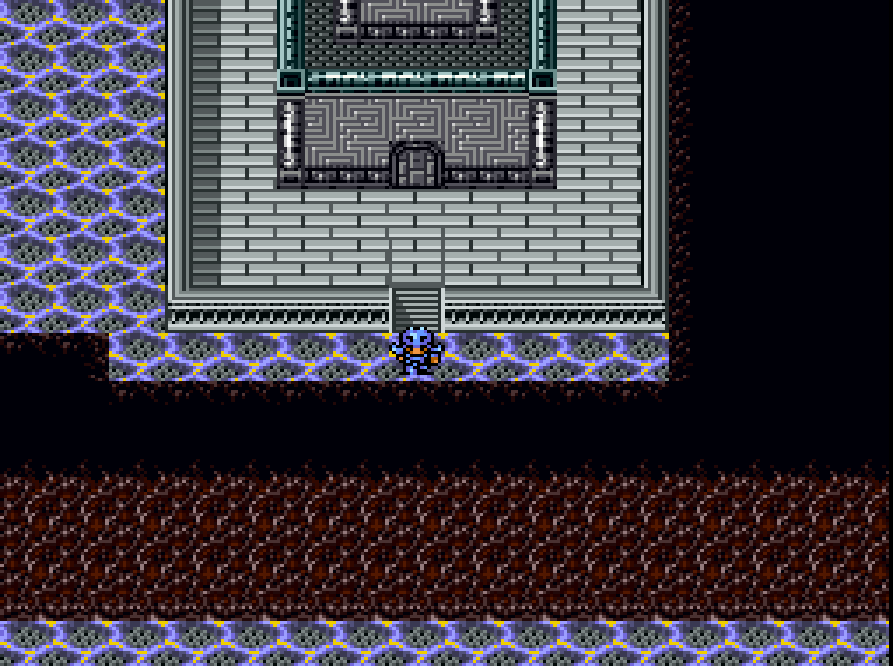 The lack of information – in-game or otherwise – supports the SaGa-like approach that encourages multiple playthroughs, but the additional content here just isn’t enough to warrant subsequent runs. There are significant story changes and the additional dialogue, while not terrible, is a bit too on the nose. There are also some characters (Tellah) that remain miles behind others in terms of viability, despite the hack’s balancing changes. With the balancing changes come many new abilities, though, which adds some much needed flavor to the original character classes. Dark Knight Cecil, for example, gains access to some enfeebling spells that further emphasize “the darkness within” while Kain’s health-draining Lancet ability falls right inline with what we’ve come to expect from the Dragoon class in newer Final Fantasies.

That said, the bad still outweighs the good as a whole. In the author’s defense, Unprecedented Crisis was created to showcase what was possible with the utility, not necessarily to blow minds – the former was likely a success. I don’t really see myself trying out another hack, especially since a solid randomizer, the Lunarian Shuffle, exists for when I really want a change of pace. 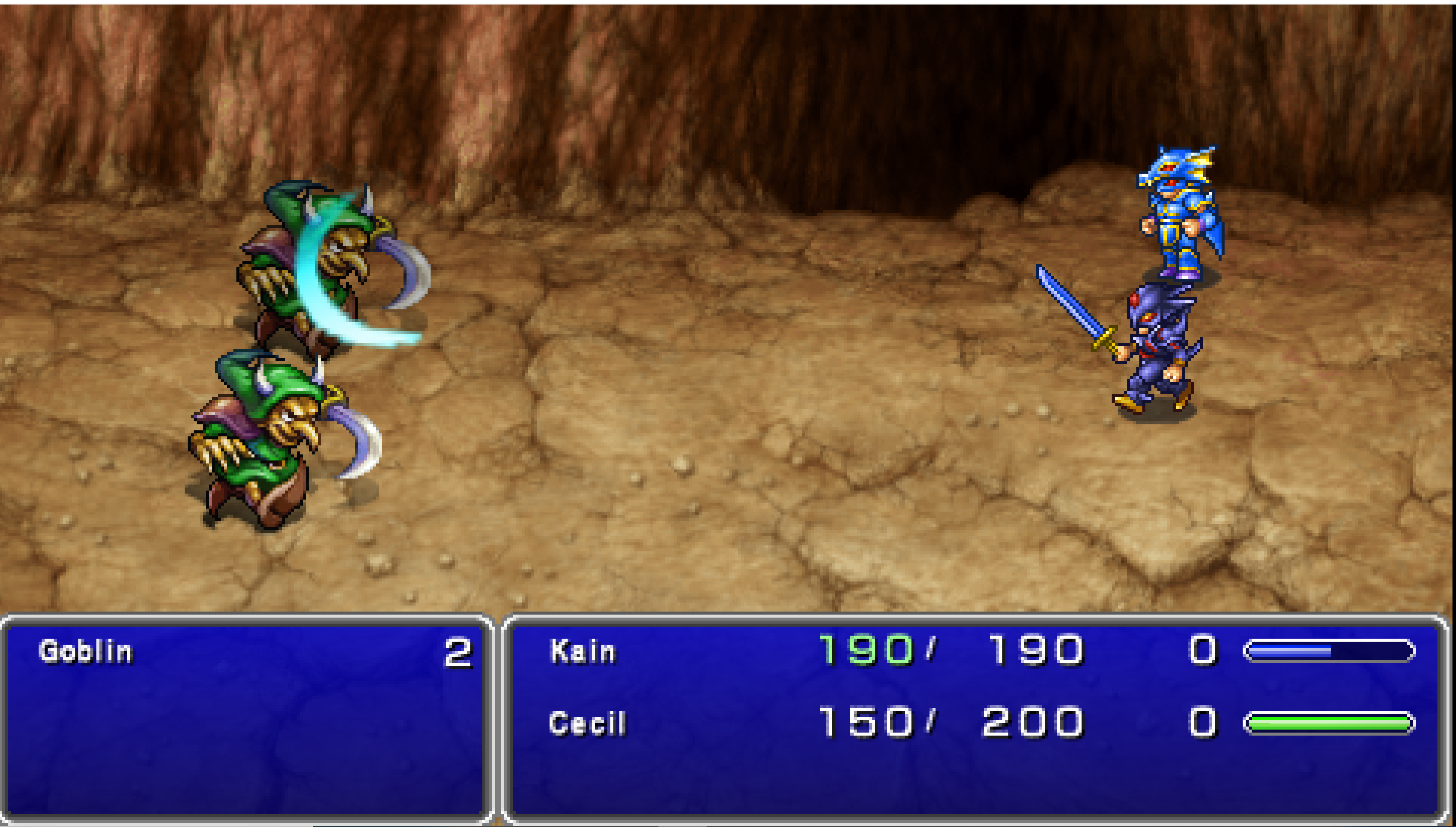 The PSP version of Final Fantasy IV is often regarded as the “definitive edition” thanks to its wide array of enhancements and features. Building upon its GBA predecessor, The Complete Collection includes the post-game content of its inspiration, a fresh look, an updated script, and most notably its sequel, The After Years. I was a late bloomer to the PSP and completely missed out on this, so I had to give it a shot. It did not disappoint.

While the spritework of the original game will always be my favorite, the team here did a nice job of blending old with new, taking the source and improving it without losing sight of its former shell. More importantly, it did not fall in the same graphical trap as some of the more recent retro Final Fantasy re-releases have done. Thank. Goodness. The newly arranged soundtrack fares similarly, faithfully recreating the majority of the iconic, original tracks. If you just aren’t feeling the new tunes, you can swap to the original soundtrack at any time from the main menu — neat!

For me, one of the best features was the auto battle option, which will automatically execute the party’s previous actions for its duration. Truth be told, many retro RPGs just aren’t that stimulating combat-wise, so having the ability to speed up the process during more trivial encounters is an obvious win. Surprisingly, the final party can be adjusted after reaching a certain milestone, meaning you can tackle the endgame and postgame with your preferred team. Each of these “new” characters have unique lines to better fit into the tail end of the narrative – a dynamic I wasn’t expecting, but certainly appreciated. 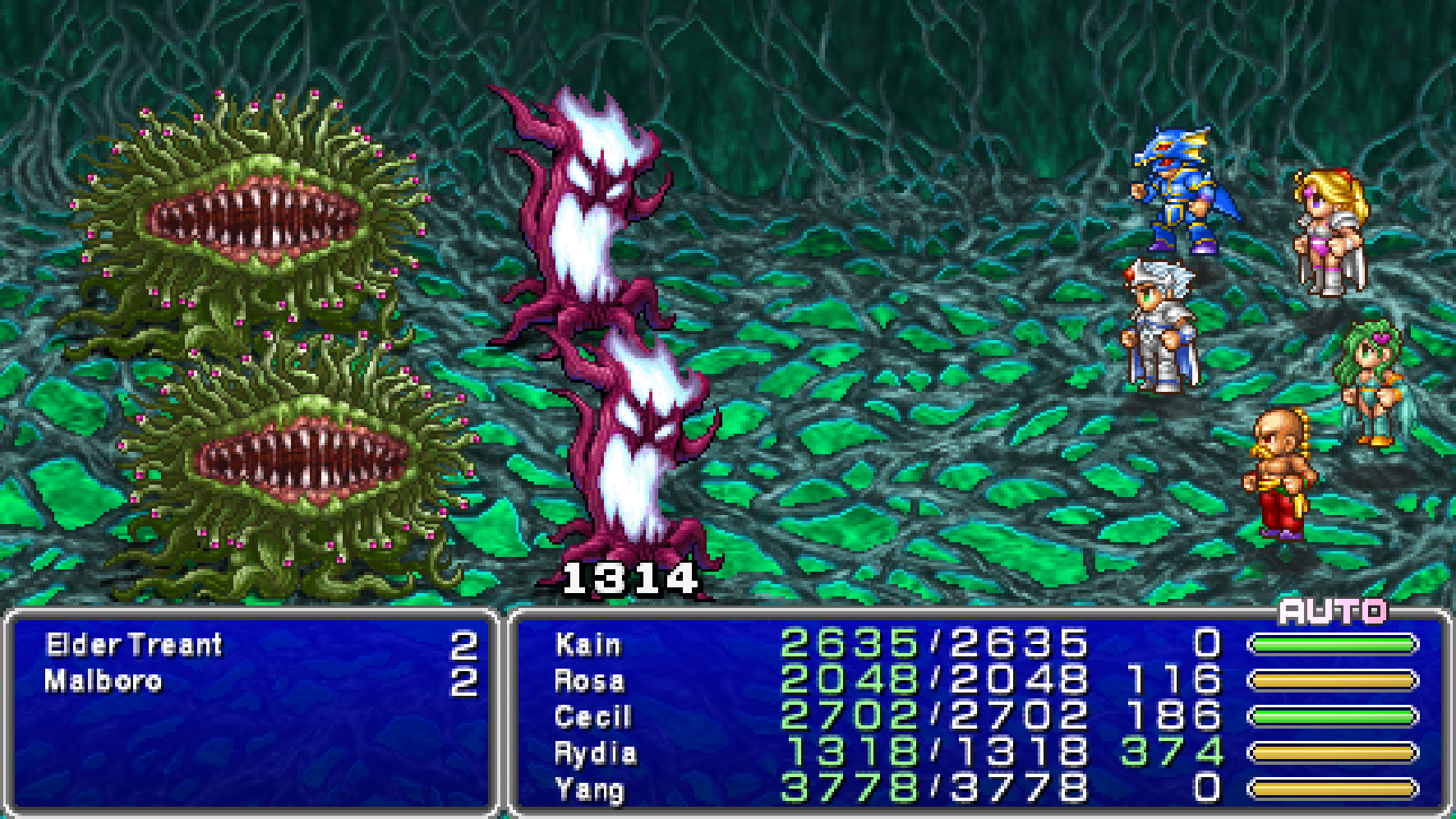 After completing this version, I’d have to agree with the consensus – it is arguably the best overall package of Final Fantasy IV. While I prefer the original to it in ways beyond the nostalgia, the alluring scent of modernization doesn’t tarnish what made the game so special in the first place. If anything, it has modified it to better suit my more “modern” palate of today. If Square Enix were to ever combine the difficulty of the DS version with the aesthetics of this game, I’d be in heaven.

Returning to Final Fantasy IV in 2020 has once again assured me that it is my favorite game in the series. It may not have the customization provided in V, nor the narrative depth of VI, but it remains a solid formula that holds up well even today, especially given the additional content/adjustments provided by the PSP version. While I was tempted to play through the post-game, I ultimately decided to dive right into The After Years since I have yet to beat it. Why? That’s a story for another time – one which I hope I can share alongside an actual After Years review soon!

What is your favorite version of Final Fantasy IV? Do you think we will ever see it on Switch? Which version do you think they will port? Let me know!

FFIV is my favorite game ever! I played it in 1991when it was FFII and have fallen in love with all the characters. I hope to see the story continue. Fingers crossed.

Same! I’d love to see a continuation as well, but only if it is handled more delicately than The After Years was.

I wished they would make it available for the switch

I would love that so much.