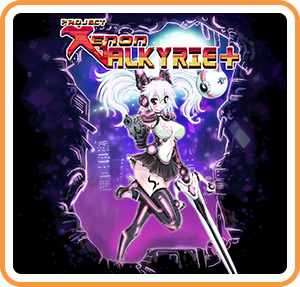 I’ve got to be honest: I’m not the target audience for roguelikes or roguelites. While years of dungeon diving in Diablo II have made me appreciate the elements that often identify the genre, such as randomized maps and loot, most of the games I have played are either too light on RPG elements, too difficult for my personal tastes, or both. That is why Xenon Valkyrie+ caught my eye, because it was marketed as a roguelite action platformer with an “incredible story”, RPG equipment upgrades, and stat/leveling progression systems. Now that sounds great, but does it actually check all of those boxes in practice? 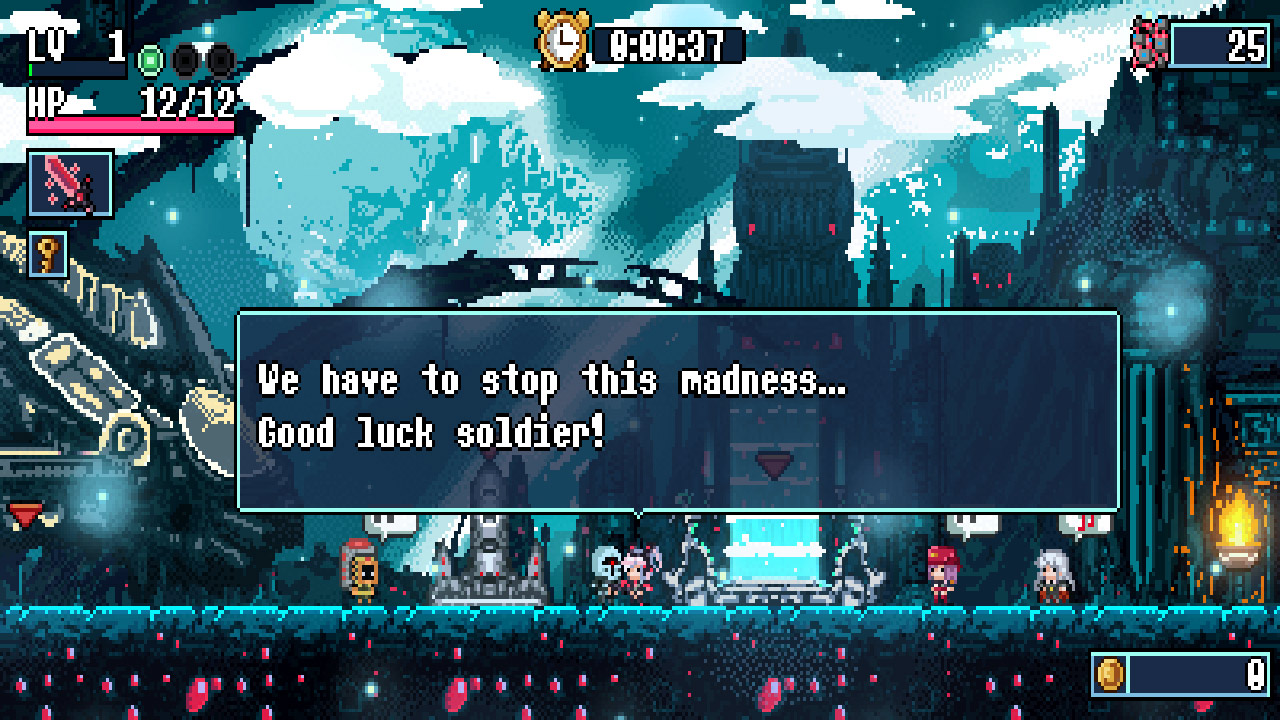 Xenon Valkyrie+ follows a team of individuals that have ventured to the depths of the moon in order to thwart the plans of an evil witch. Most tidbits of lore are presented through conversations with NPCs at various safezones, and while they do a decent enough job of establishing a baseline plot and purpose, it doesn’t go too far beyond that. There isn’t a huge emotional connection to the delivered content, which makes it more forgettable than anything else. Xenon Valkyrie+ does feature multiple endings depending on how you handle certain situations, but you might not be entirely convinced that the effort required to experience them all is worth it. I would certainly not consider Xenon Valkyrie+ to have an incredible story like its description suggests, but it’s not terrible either.

Before jumping into the action, you’ll need to pick one of three characters to control, each of which have their own unique starting stats and a special skill, ranging from a treasure-finding radar, reusable bomb, and a super jump that would make the Italian plumber himself jealous. Swords, Guns, and Grenades are also available to each character, and their initial effectiveness is determined by their starting stats. Just pick whichever character seems most appealing to you, because the stat differences can ultimately even out as you level up.

Xenon Valkyrie+ has you traveling over multiple biomes on the Moon, from ancient forests to frigid tundras. Each of these locations present you with at least two separate, randomized maps you must traverse before moving on to the next area. Any time you reach the end of a map you are able to allocate talent points in order to improve stats of your choice, while brushing up on a bit of lore and partaking in randomly generated item shops. If you’re luck is anything like mine, however, the item shops will lead to more frustration than actually being useful. I can’t count how many times I’d be full on ammo and grenades and the shops would be completely stocked with just that, instead of having health potions I desperately needed. But that level of randomness is why people love roguelikes/lites, right? 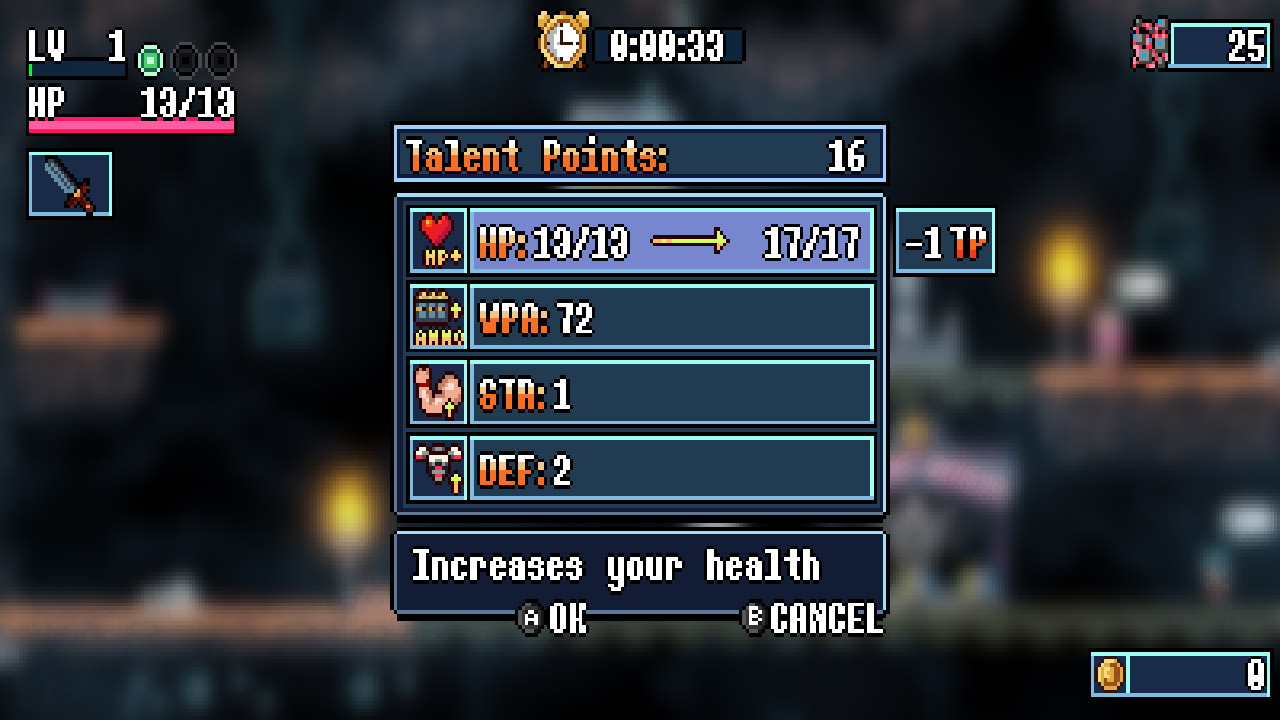 Any time you complete the last map in a series, you’ll have an opportunity to shop and allocate talents points before being thrust into a boss encounter. Almost all of the boss fights have clearly telegraphed attacks and/or patterns, which make them easy to pick up on and master in little time. However, you won’t always face the same boss every time, meaning you’ll often have to adapt to the situation on-the-fly. Interestingly enough, you cannot use anything outside of jumps and sword swings to take down bosses, and this limitation is never explained in game. It might have been an easy way to balance each character up against each boss, but it feels a bit weird not being able to use your character’s entire toolkit all the time. Regardless, defeating a boss rewards you with a random passive perk and some teamerite, a mineral-like currency used in purchasing various quality of life items, and is one of few things that carries over with each playthrough.

In traditional roguelike/lite fashion, permadeath is a thing in Xenon Valkyrie+, and only a handful of things transfer over to your next run. As you travel further into the recesses of the moon, you are able to unlock portals that give you the option to skip some of the earlier areas altogether, but their actual usefulness is rather limited. When you agree to jump ahead, you forfeit the potential to discover powerful gear, acquire passives from defeated bosses, and maximize your talent point pool. It might be considered a nice tool to some that quickly want to learn the ins and outs of a new biome before committing to a more serious run, but starting from scratch still seems like a better choice most of the time.

Each character in Xenon Valkyrie+ is capable of using both melee and ranged attacks, each of which can be potentially upgraded by the contents found in treasure chests. You will typically come across one chest per map and they can only be unlocked by a key dropped from the larger enemies. These “elite” enemies are fairly uncommon, and can sometimes be impossible to reach depending on your choice of character and the map generation itself. Don’t be surprised to see a portion of a map completely inaccessible if you have run out of grenades and/or did not choose the character that has access to the reusable bomb. I get that these walled off sections aren’t gamebreaking, but I also don’t see the purpose of putting anything behind a Great Wall of China for the two characters not fortunate enough to have unlimited access to explosives.

The fruits of labor behind treasure hunting vary too, as you aren’t guaranteed an upgrade from a chest at all. Not only can the stats on the newly discovered loot be trivial in comparison to your current loadout, it could also turn out to be a gun in situations where you really could use a sword. It is exciting to come across a really powerful weapon early on and rage-inducing to receive the equivalent of a pea shooter five chests in a row, but I guess that is part of the appeal of the subgenre. There are a few powerful weapons that can be unlocked with teamerite from your main hub, but they only give a small chance to finding them in a chest along with the existing pool of gear.

While I would have preferred a little more balance between the two extremes, one good thing about the system as it stands is how it encourages you to compensate for whatever gear you get when you are considering how to allocate talent points. You may not have to invest as heavily into strength if you come across a really powerful sword, for example. This truly plays into the roguelike/lite idea of “no two runs ever being the same”, and for that I can appreciate its design.

Overall, Xenon Valkyrie+ feels a bit tame in terms of difficulty compared to other titles I’ve played in the genre. It most definitely has moments of challenge, but not in a discouraging or “unfair” way. The randomization of shop items is probably the most brutal part of the game, since they rarely have health potions and other healing avenues are minimally useful in comparison. 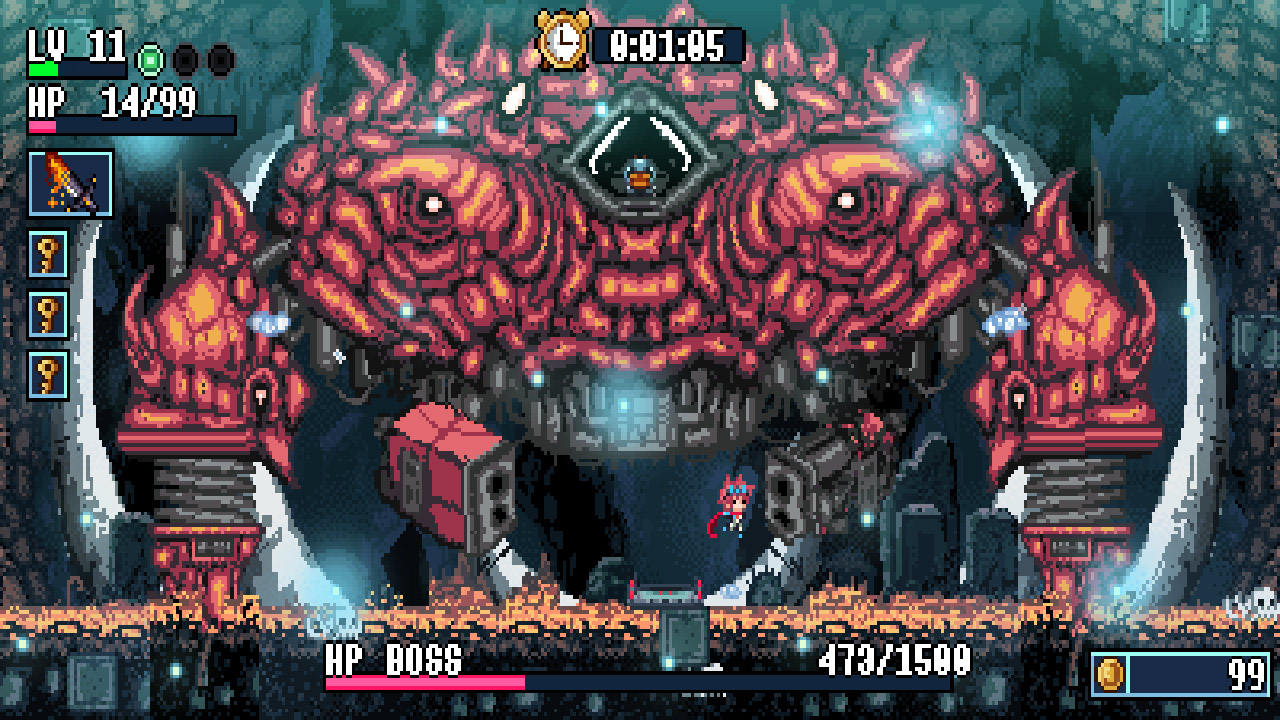 Xenon Valkyrie+ does a wonderful job of capturing the spirit of the retro games of yore through its colorful pixel art and catchy soundtrack. While some have complained about the usage of tiny sprites and “view-obstructing” foreground particle effects, I had no issues with either thing. Admittedly I spent most of my time playing docked and blown up on a big TV, but I can see how it might be more invasive to those that are exclusively playing in handheld mode. Characters, NPCs, and enemies are not extremely detailed due to their size, but the bosses are massive and truly a sight to behold.

Energetic, techno chiptunes are played throughout Xenon Valkyrie+, and I found myself enjoying them quite a bit. Seeing as I’m not a real big fan of techno/electronic music in general, that is a pretty big compliment. Ancient Techforest in particular gives off vibes of that epic club scene in Collateral, which is totally rad. The sound effects are less than impressive though, as there are no really good audio cues behind the actions you perform, making them feel pretty weak in the process.

Xenon Valkyrie+, for the most part, succeeds in what it promises. While the story really suffers from its overhyped, pie-in-the-sky tagline, the gameplay itself is challenging (but fair), and that is coming from an inexperienced/sissy roguelike/lite consumer like myself. Some issues exist beyond the overpromised story, but it’s difficult to fault it harshly when you consider the game sits at only $9.99USD retail. It might not satisfy the most hardcore roguelike/lite fan out there, but it has certainly made me consider trying more types of these games in the future. Xenon Valkyrie+ releases on Nintendo Switch on January 1, 2019.