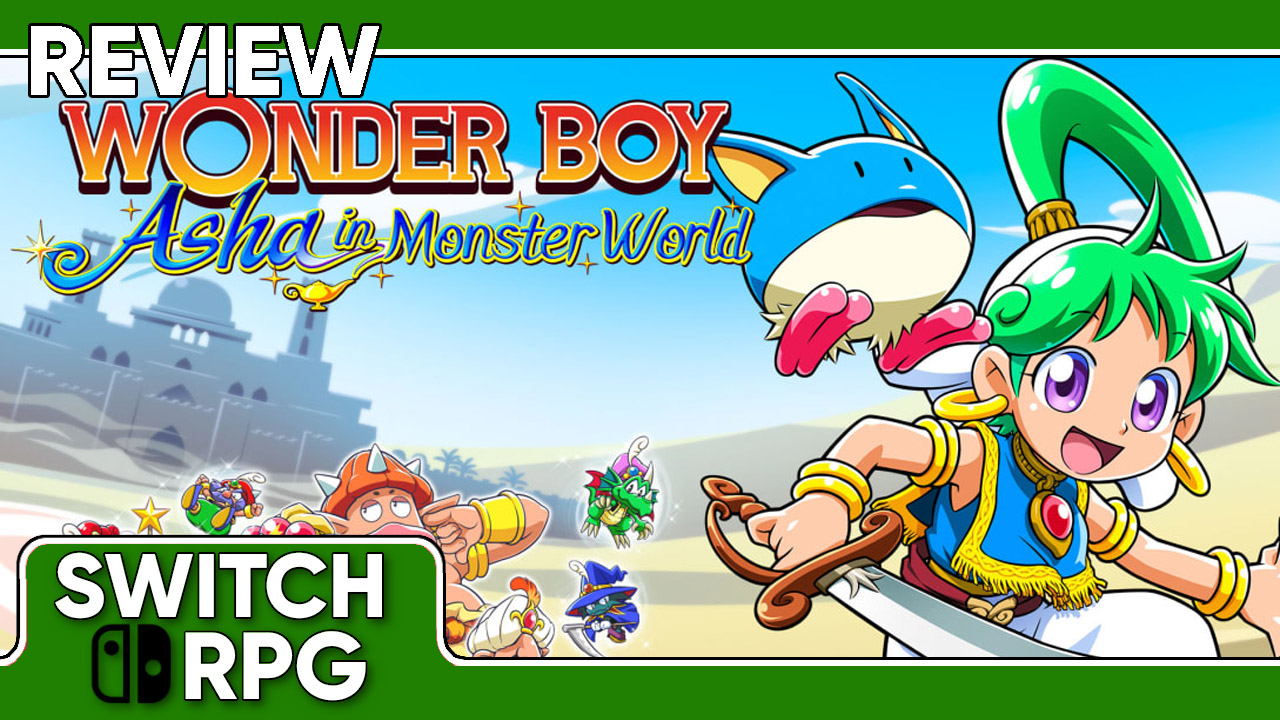 Growing up as a Nintendo kid, and not having access to most of the SEGA library, I only recently became familiar with the Wonder Boy / Monster World series and its spiritual successor, Monster Boy and the Cursed Kingdom. With a bit of help from our wonderful Discord community, they filled me in on the series’ roots and history. I really enjoyed 2019’s Monster Boy and the Cursed Kingdom – it was a GOTY contender for me and a Metroid-Vania masterpiece. So when I first learned about the upcoming Wonder Boy IV remake, Wonder Boy Asha In Monster World, I knew I had to have it. Westone Bit Entertainment developed the SEGA published original Monster Boy IV, and STUDIOARTDINK (digital version) with ININ games (physical version) are responsible for publishing the remake. Let’s see how the remake of this 1994 classic fares in 2021! 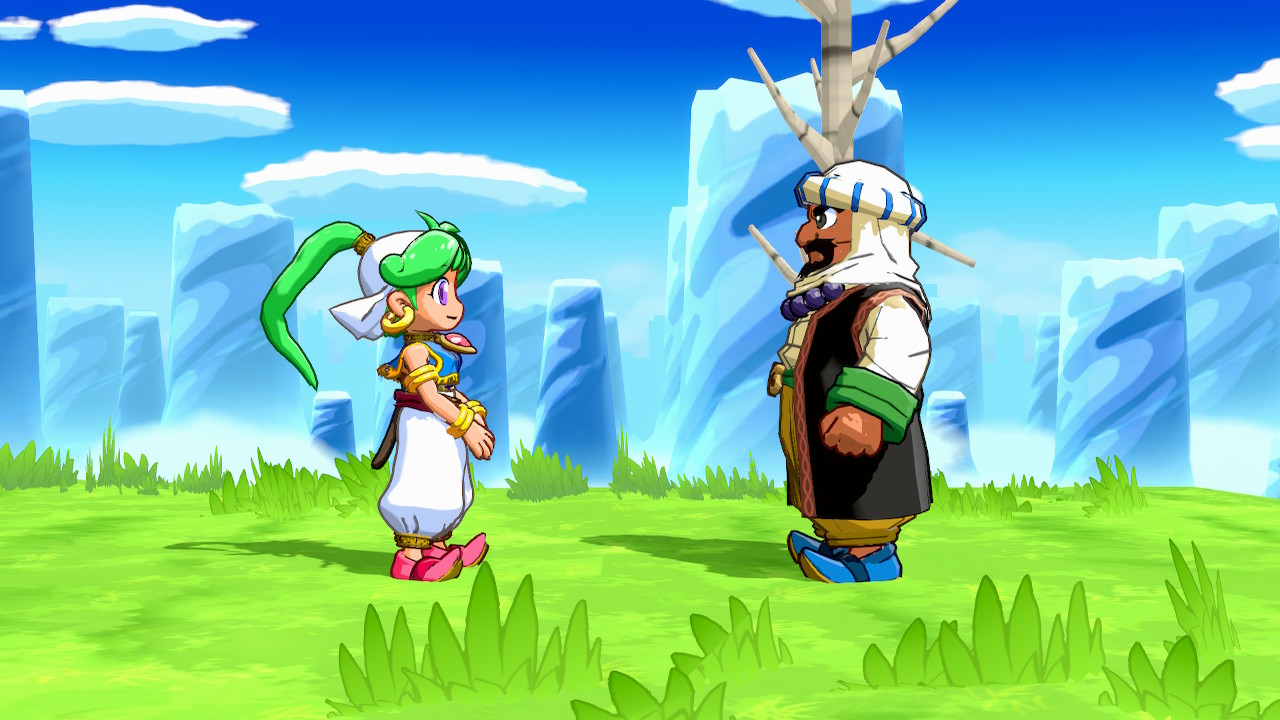 Our tale begins in Asha’s village not far from the capital city. Our green-haired heroine hears a mysterious voice beckon them to rescue the land from an evil presence. With your goal to be recognized as a warrior by the queen, as well as to save the world from the evil presence, you say goodbye to your family and other villagers as you set off for the capital of Rapadagna, the oasis in the desert. You can definitely see and feel the Middle-Eastern vibes the game is inspired by through both the character design and the environments.

After traversing the forest, completing the tower of silence, and reaching the capital, you speak with the Queen who then dubs you a warrior and tasks you with a quest: save the four spirits who have protected the land. She mentions the dark clouds that have brought an evil omen to the city and asks you to defeat the looming darkness, which is also responsible for capturing the spirits. The story in Asha, as is the case for most entries in the genre from the ‘90s, is unsurprisingly light, but what is here (including some great cutscenes) does a good enough job setting the stage. 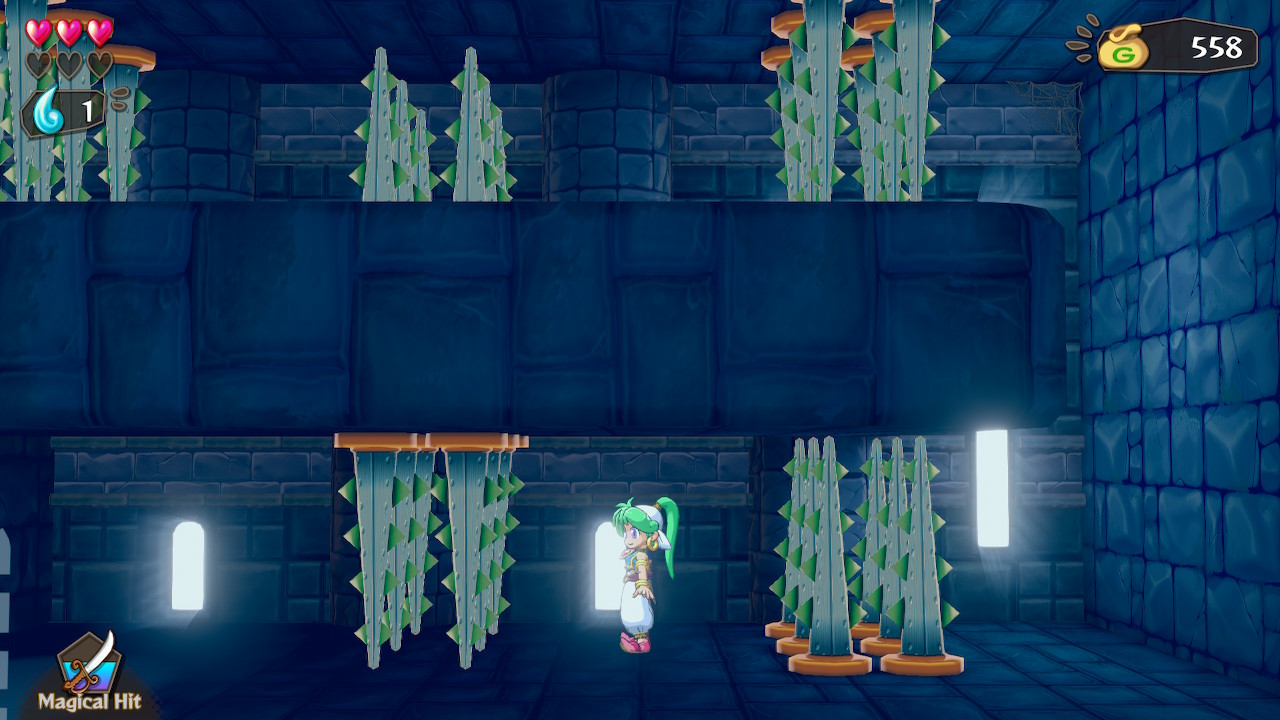 With most side-scrolling action-adventure games, combat and platforming take center stage and that certainly applies to Wonder Boy Asha In Monster World. There’s more to combat than just jumping with one button and swinging the sword with another. Asha can perform an up and down attack, which is very useful against airborne enemies or taking out a string of ground enemies with repeated downward strikes. Furthermore, a strong special attack will periodically become available after dealing a certain amount of damage – saving and using this on more formidable foes is quite helpful! 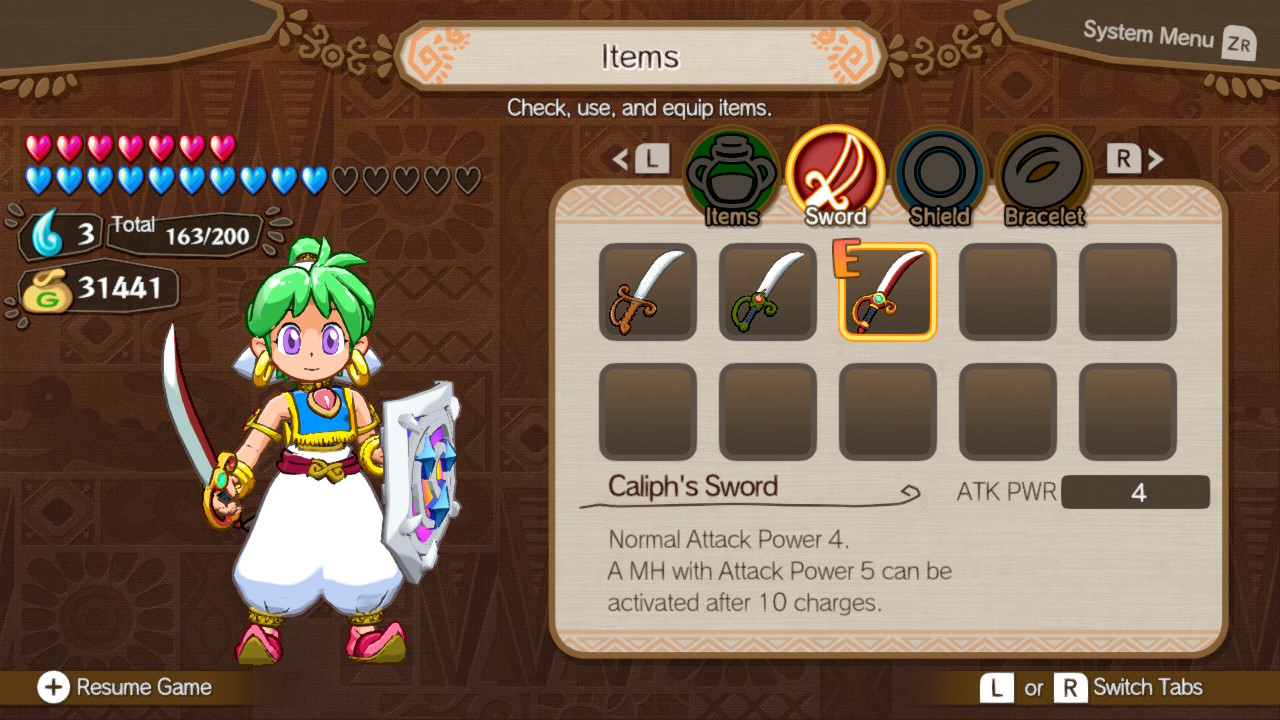 Asha carries a sword and shield into battle, both of which are upgradable at shops in town. You can also swap between different types of equipment – one shield may be weak/strong to a specific element, for example. As you might expect, the four spirits that need saving all have their own unique element and appropriate biome. Having a variety of gear at your disposal (with different elemental properties) is key to survival. In addition to managing equipment (sword, shield, and bracer), the inventory screen will also help you keep track of consumables and key items. As you adventure out into the world, or even complete simple side quests for NPCs, Asha may be rewarded with a gold bar that can be sold in town. Various roots and elixirs can be purchased and used to restore varying degrees of health. 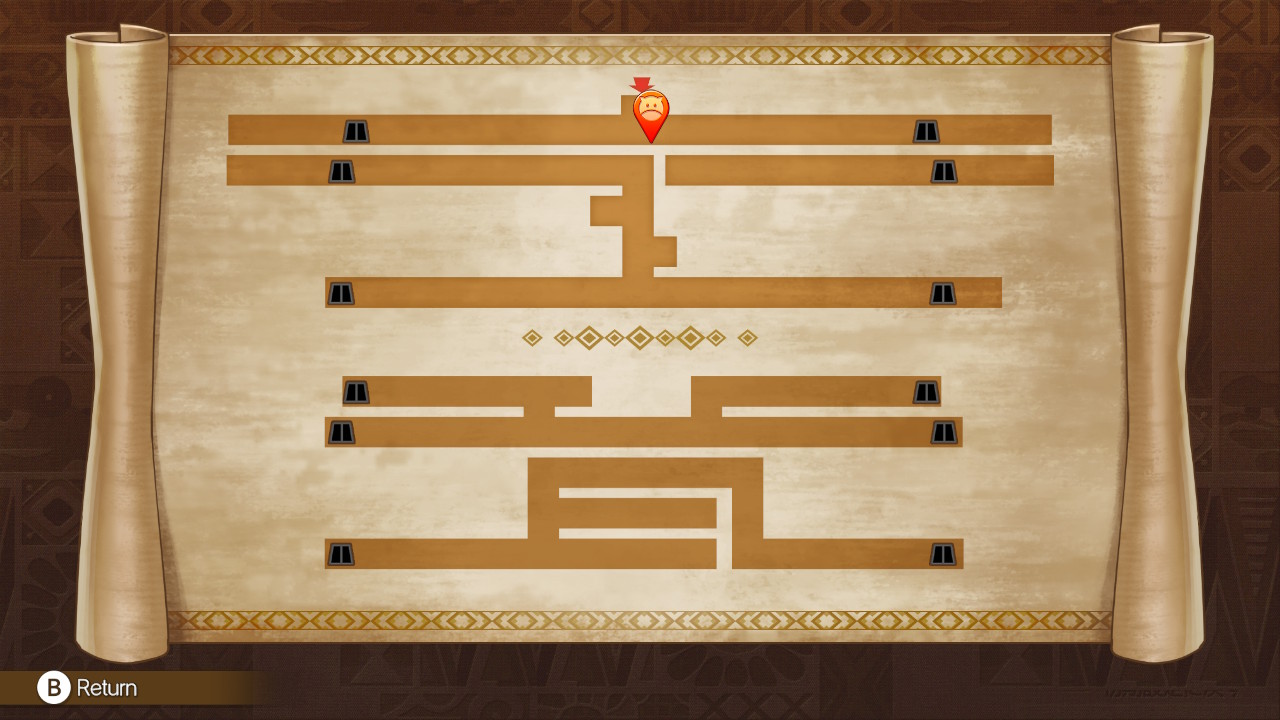 Sadly, Asha does not level up in this game and her character progression is tied to buying and equipping new equipment, defeating bosses to get heart pieces, and finding blue drops scattered throughout the world. Collecting 10 of these drops will grant you an additional heart and as you complete each world or area off the capital city, you will get a report at the end telling you how many you missed.

Early on in your adventure you will acquire a Pepelogoo, a blue flying monster hatched from an egg that accompanies you and is key to solving certain puzzles. Pepelogoos aren’t exclusive to Asha, many NPCs also have them or at least talk about wanting one. Asha’s Pepelogoo grants a double jump ability, allowing her to reach higher/trickier areas.

Pepelogoo also assists in puzzle solving as it can interact with various elements and help you solve puzzles. For example, in the ice themed temple, it can melt certain platforms to allow you to reach certain areas. Conversely, in the fire area it can extinguish flames and allow you to pass. Pepelogoo is essential in not only progressing the levels but solving many of the various puzzles. Some of these puzzles involve traversing between the foreground and background. While the game is 2D, at times you will be prompted to push a button which will allow you to swap between the two “layers” to hit a switch, or to find a collectible. 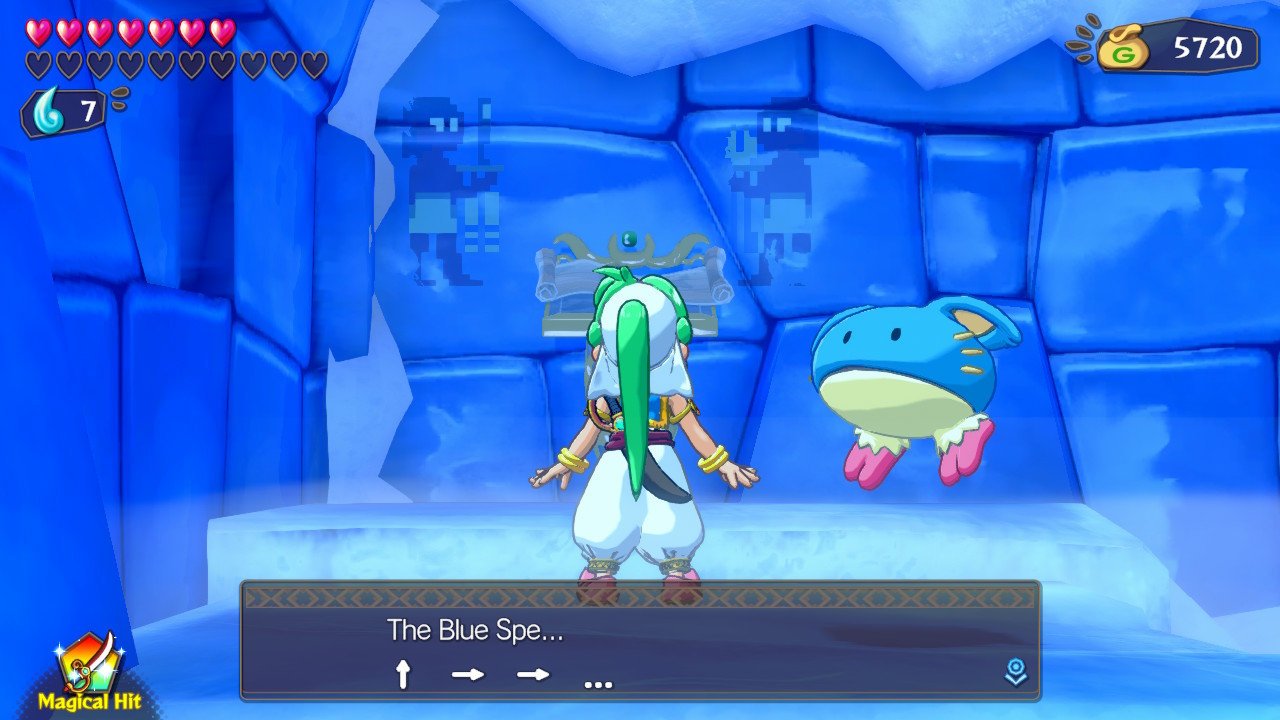 While most NPCs are there for casual banter, a few will ask you to talk to a certain person or to give a letter to someone, and doing so will complete the quest and usually grant you a small reward. One NPC you will run into a lot is Sage. He will, in a jokingly fashion, tell you about features you probably already know, like to “read the signs” or “save now” as you are near the boss. Speaking of saving, the game does not have an autosave feature at all. You can save anytime from the menu and have 12 save slots, however – use them so you don’t potentially lose hours of progress.

When it comes to a remake or remaster, it is important to bring out the best of the new design while not losing the essence of the source material. While Wonder Boy Asha In Monster World is visually appealing most of the time, some of the new 3D visuals lack a bit of detail. Other design decisions – for example, the pink background with scrolling playing cards – just feels like an odd choice. Moreover, Asha’s movement will sometimes react incorrectly when running down a hill. On top of that, the controls at times can feel a little floaty and not as precise as I would prefer – your mileage may vary. 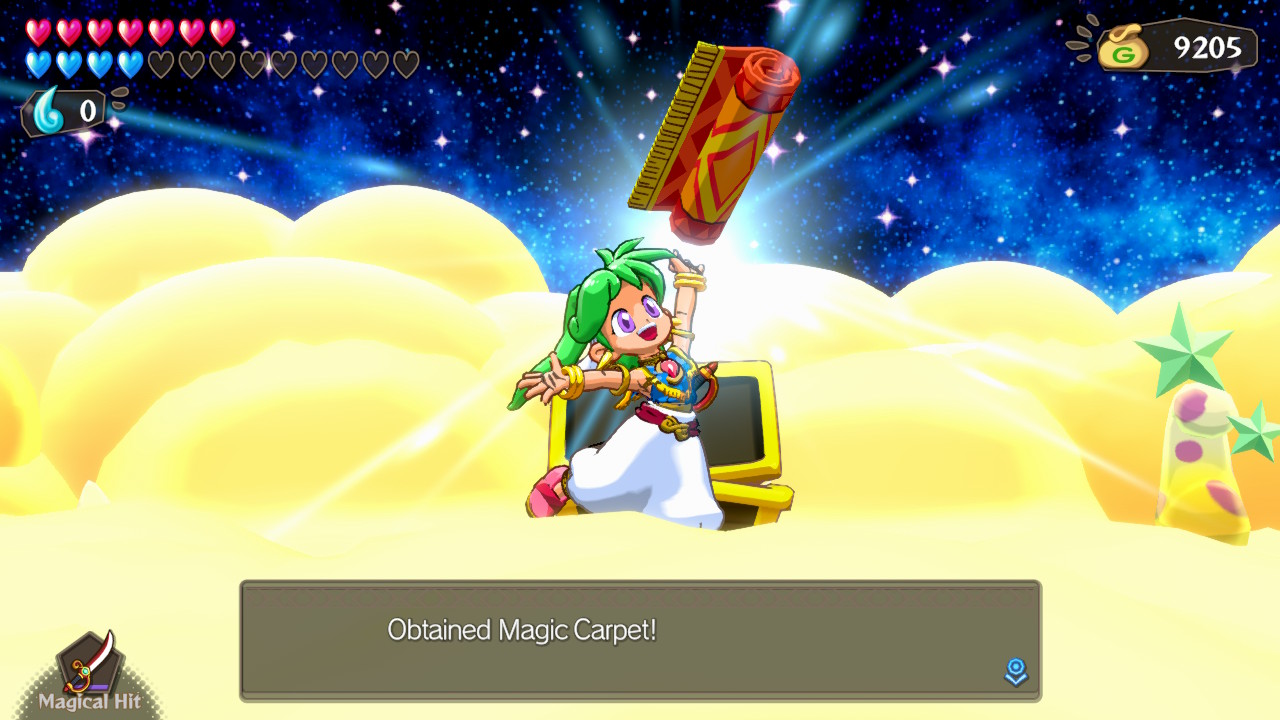 Gripes aside, Wonder Boy Asha In Monster World performs well on the Switch, with only an occasional dip when a lot is going on at once. The game’s soundtrack is great, the animation is well done, and the voice acting – minimal as it may be – in the animated cutscenes is a nice bonus. In short, this remake is a solid package that keeps inline with the source material while bringing it forward with modern hardware.

Overall, I enjoyed my time with Wonder Boy Asha In Monster World. My own playthrough clocked in around seven hours and it seems that is accurate for most players. Skilled veterans of the series can complete it a bit faster, I’m sure, and completionists will likely squeeze a bit more time out of it. Now that I understand the game’s history, I see traces of this series in the spiritual successor Monster Boy and even in the Shantae series.

I like the remake and understand the developers wanted to be true to the source material, but adding quality-of-life improvements would have been appreciated. The save and map systems could have used some more care, at the very least. An optional feature to toggle between both the original and updated visuals on-the-fly would have been awesome, as well. If you can find the physical version of the game, I would recommend that as it includes a copy of the original game (which is NOT available in the digital version, even though it is mentioned in the credits). 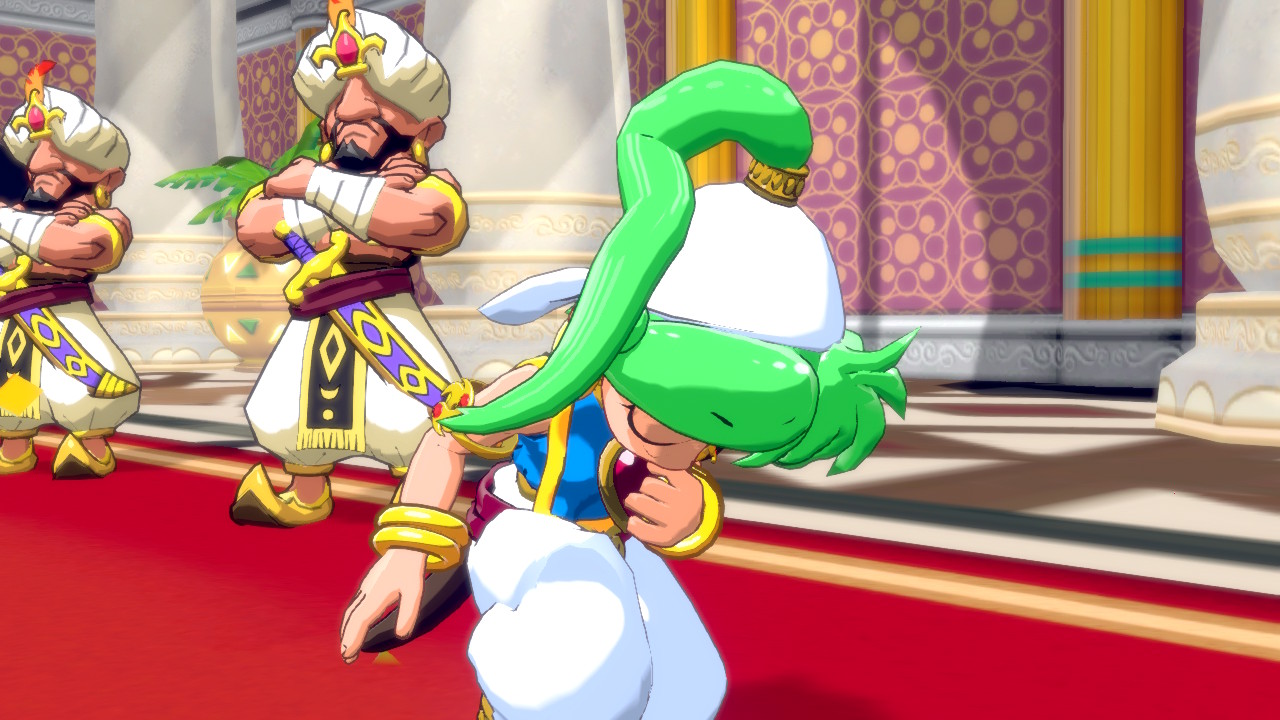 I can’t help but “wonder” why the team decided to trade in the pixel art for what seems like a budgeted 3D approach. Don’t get me wrong, the new look isn’t bad at all and the animation is great, especially the dance Asha performs every time she opens a treasure chest. I just would have just preferred some more detail if they were so keen on abandoning the original pixel-based approach.

Regardless, fans of the series, and especially the original game, will enjoy this remake and the improvements that have been made, especially the added voice acting to some cutscenes. If you are like me and haven’t played many entries in the series but like side-scrolling action-adventure RPGs, this is a solid entry point. Having played this and Shantae and the Seven Sirens recently, I am looking forward to playing another Monster Boy game soon (Dragon’s Trap). For series fans and newcomers, Wonder Boy Asha In Monster World is a charming adventure worth taking.