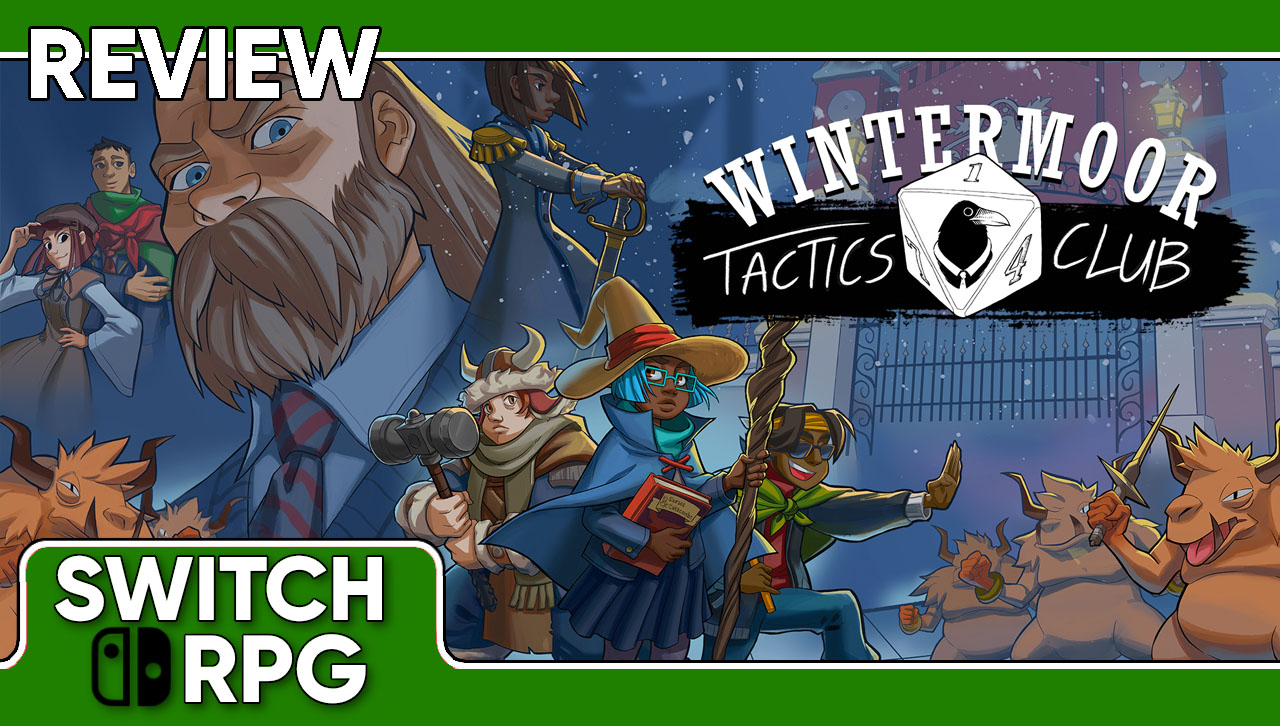 Being a teenager is rough. Between balancing school, family, and free time, as well as battling puberty and hormonal whiplashes, it can feel as though you’re all alone in the world. However, if there’s one upside to being a teenager, it is the availability of school clubs where students can find others that share their interests. But what happens when your seemingly evil principal decides to destroy that harmony and toss all the clubs into a tournament style snowball fight, where only the winning club gets to remain together? Well, you get Wintermoor Tactics Club!

Wintermoor Tactics Club is a tactics based game that operates very similarly to other tactics games in its genre, but with some twists of its own. The strategy portion of the game operates under the setting of playing a “Curses & Catacombs” (henceforth known as C&C) battle, with the player using the C&C characters instead of the actual characters themselves. And as you progress through the story, you will gain new characters with new abilities that can make team building a little bit more interesting.

Each character has their own abilities, most of which are unlocked while playing through the main story and some side quests. However, you can only select two abilities to remain active at any point, and depending on which two abilities are selected a third ability can be active, as well. For a majority of the game, you will play with a team of three characters. Outside of a few battles where one character is required, you can select any of the available members of the Tactics Club to play through any given battle. 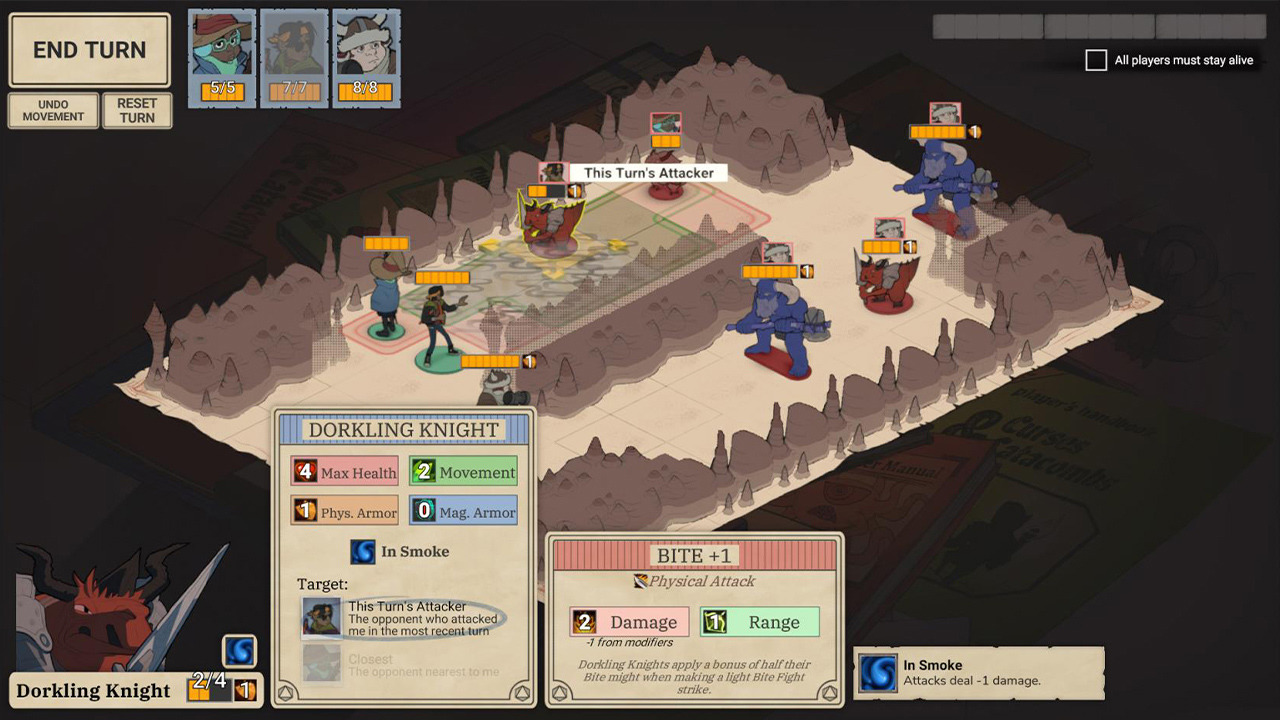 Two staples of tactics games that are missing from Wintermoor Tactics Club are a healer class, and leveling. Given the short nature of battles (very rarely will you go over 10 turns, or even 5 for that matter), healing isn’t really necessary. While, of course, you will want to play strategically to take the least amount of damage possible, you’re encouraged to be more aggressive with your movements and attacks. As for the lack of leveling, all units are pretty much the same strength, outside of major bosses. You will be paying more attention to which enemies are weak to physical attacks and which ones are weak to magic instead of spending time grinding up levels. 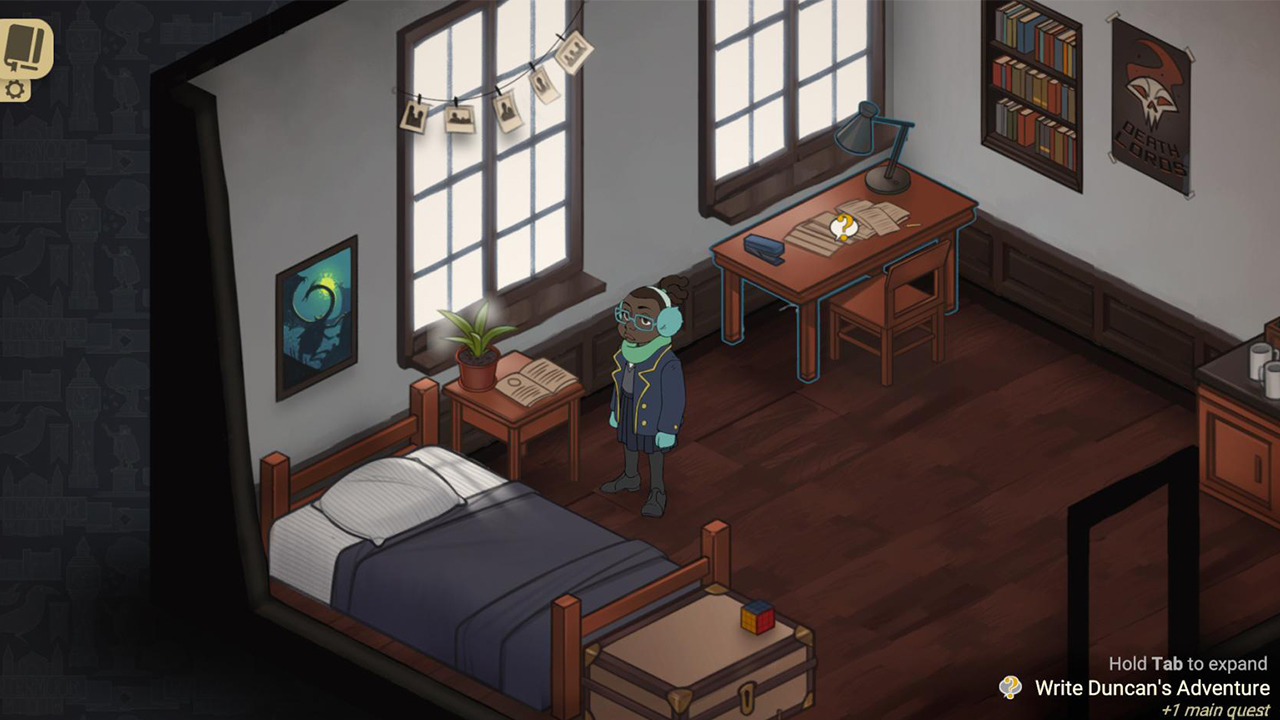 Unfortunately, the controls are a bit cumbersome. This may just be a Switch button layout issue, but restricting grid movement to the left analog stick instead of the arrow keys makes it harder to select a specific tile with how sensitive the analog stick can be. Along with that, everything from undoing a character’s movement to selecting a specific move to use, and even ending your turn involves using either the left or right bumper along with the analog stick to make your selection. While not impossible to work with, it leaves a bit to be desired.

The story of Wintermoor Tactics Club follows Alicia and her friends in the Tactics Club as they spend their school days playing C&C. However, before you can get too comfortable with that tone of the game, Principal Enfield announces that a tournament will be held where only the victor will have the right to remain active, with all the losing clubs being disbanded immediately. 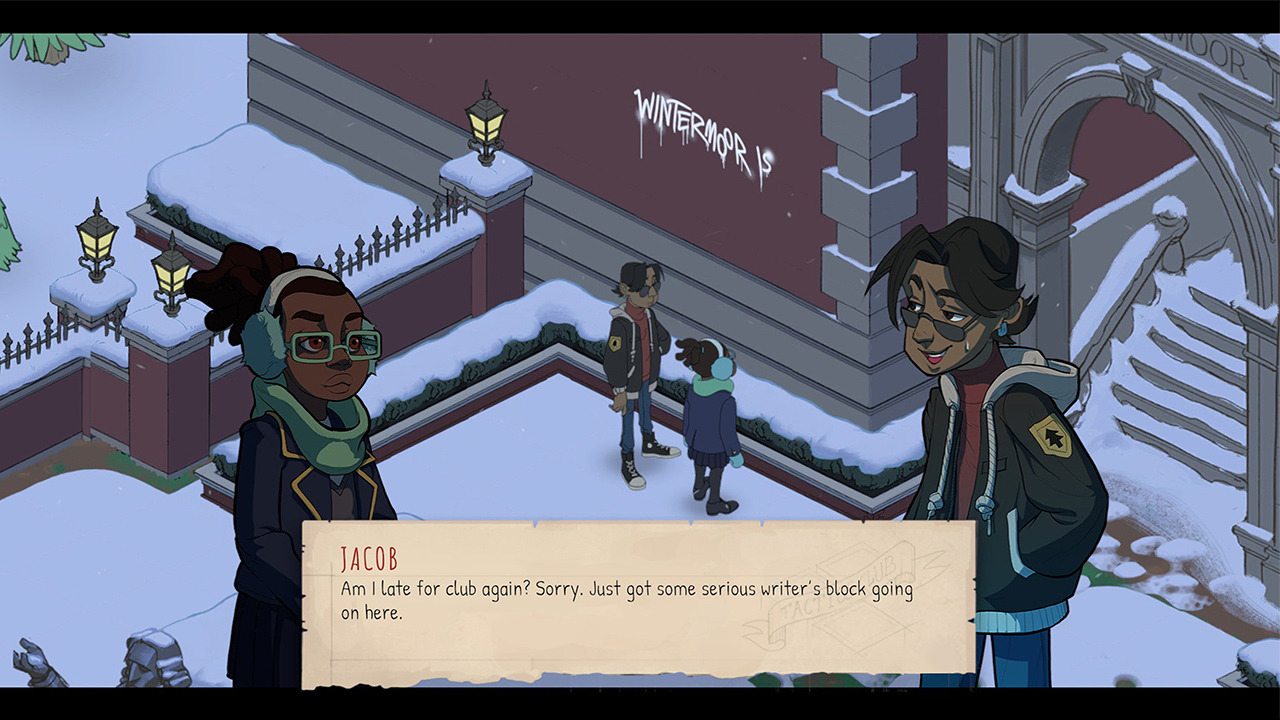 As the story progresses, it builds on Alicia’s character, as well as the Tactics Club as a whole. This is a story of growth and it tackles a lot of fears that we ourselves have more than likely faced at one point: isolation, change, rejection, and many more. And, as the Tactics Club is pitted against more clubs throughout the tournament, they all learn things about themselves that they wouldn’t have known otherwise. 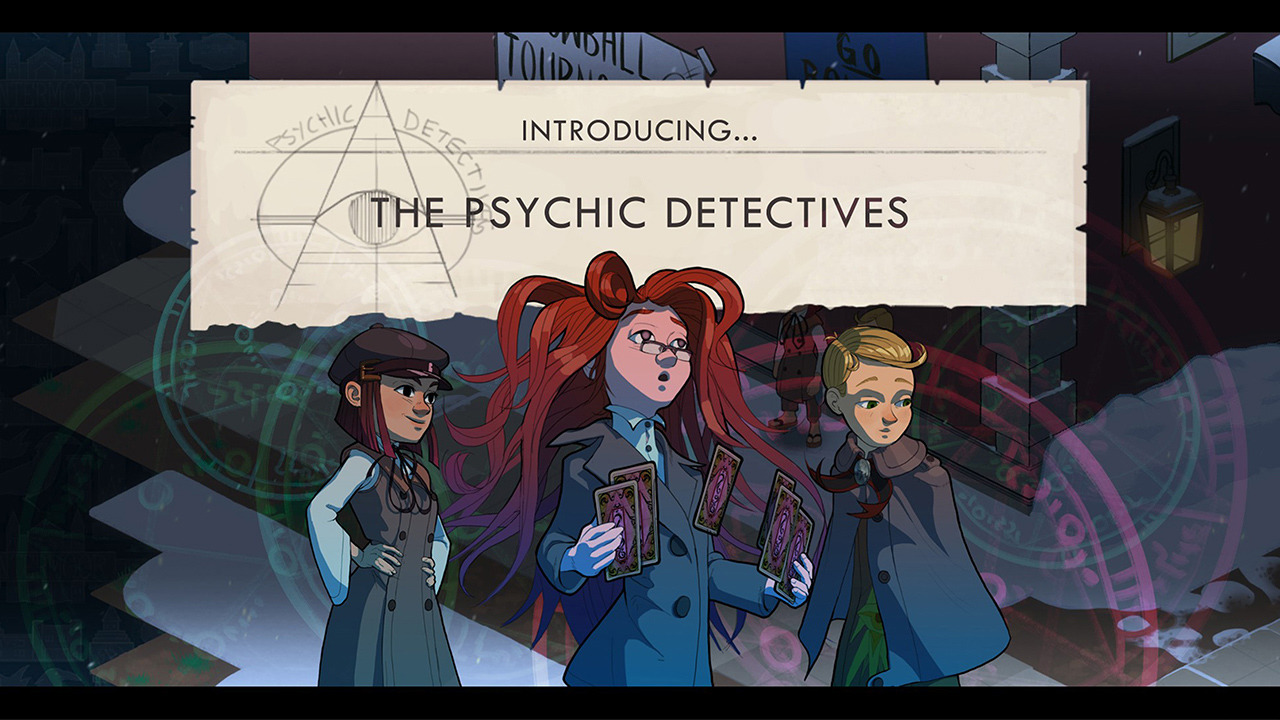 There are also side quests that can be completed throughout the story, with more unlocking with main story progression. Some of these quests will result in unlocking new abilities for your units in battle, so they are often worth the effort. There are some interesting character interactions in these quests, too, with specific characters interacting in ways that we don’t really see in the main story.

The art for Wintermoor Tactics Club is lovely, giving off strong tabletop vibes. The designs for some of the other NPCs were really fun, and brought back memories of my time in high school. You’ll see a lot of colorful characters, such as psychics, punks, and reenactment larpers. The creativity in designs wasn’t just limited to the C&C characters and monsters, either. 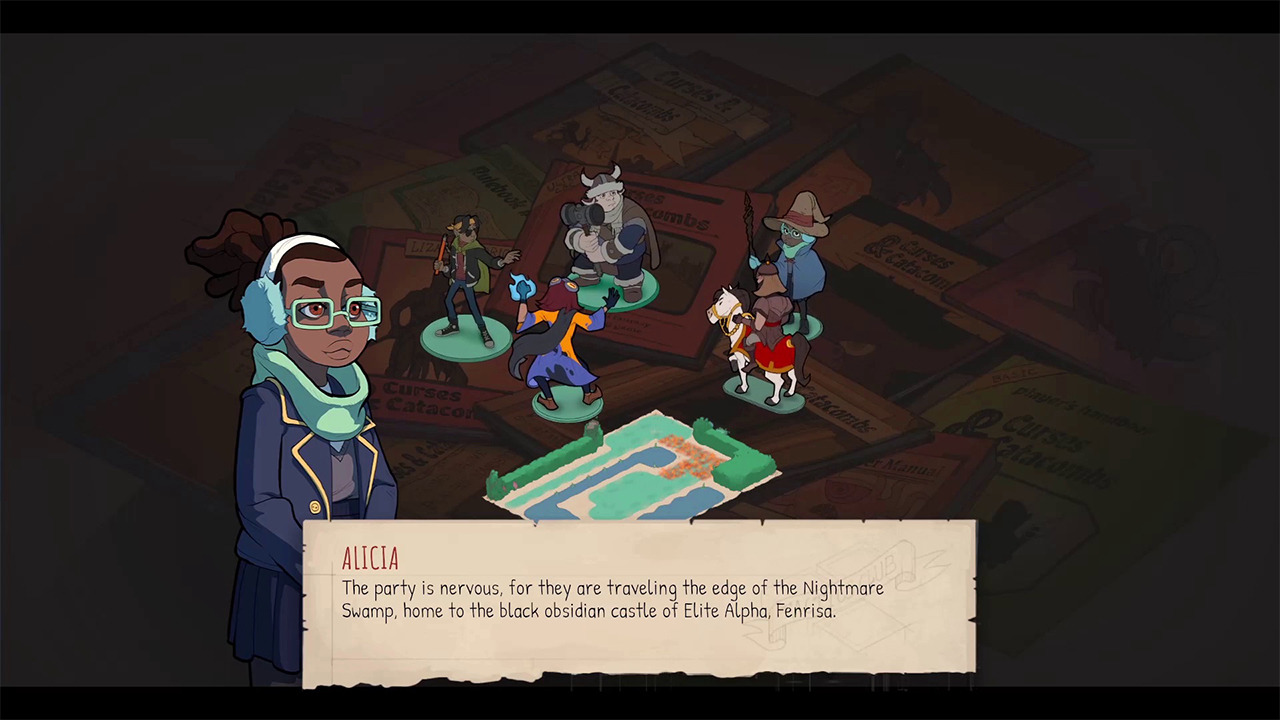 You’ll be able to navigate to multiple places across the campus. Some of these places have other rooms to explore and while everything cannot be interacted with, there are some sprinkles of flavor text for those who do dig around a bit.

Wintermoor Tactics Club presents a great story of a young girl dealing with the challenges of fitting in, helping others in the process, and all while playing her favorite tabletop game. As you progress through the story, everything unfolds in a way that is both unexpected and heartwarming at the same time. This game will definitely draw out some emotions, whether it’s sympathy for Alicia as her worries and fears increase, or frustration at Colin for his gatekeeping ways.

While the combat is more on the simple side, it remains enjoyable, especially when playing around with different abilities and team layouts. I really appreciated the fast nature of battles and that the story was front and center. If you’re looking for a deep combat system to bite into and dissect, you may find yourself a bit disappointed. If you’re looking for a tactics game with a great story and chill gameplay, however, then this game is for you. Though Wintermoor Tactics Club is on the shorter side – the majority of content can be completed in about 10 hours – it is still an endeavor worth taking.