Windscape sets itself up as a fantastical action-adventure exploration game, set in an amazing world filled with bizarre inhabitants, mystery, and epic monsters… except that it’s not and falls short in nearly every aspect of the game. It’s such a shame too, as Windscape has all the right pieces to make for a great open-world exploration game. It’s charming at times, some of the environments and characters are lovable enough to continue on, but there are a lot of questionable design decisions that just don’t enhance the player experience. Let’s delve into the details and I’ll explain. 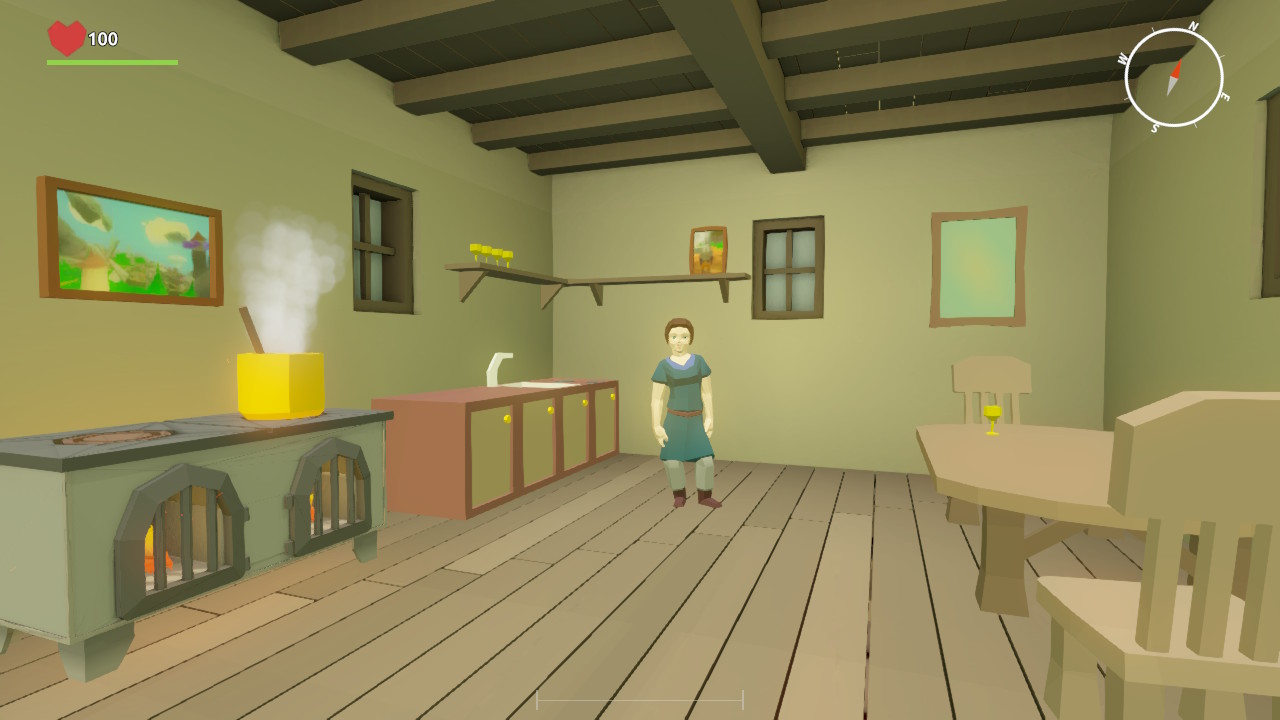 Windscape starts out simple enough with a series of fetch quests – go here and get a thing, bring it back here, and go harvest “this many” flowers for Mom’s stew. Oh, by the way, there are these bandits and they stole my ore – can you help me? Within the first couple of hours, you are presented with a small house, some open countryside, a town, and a graveyard. Honestly, Windscape starts off well enough by keeping the tasks at hand varied enough to maintain player focus. It’s just too bad that the facade quickly wears away. The more I played and the more I really started to look at things, I didn’t like what I was seeing. 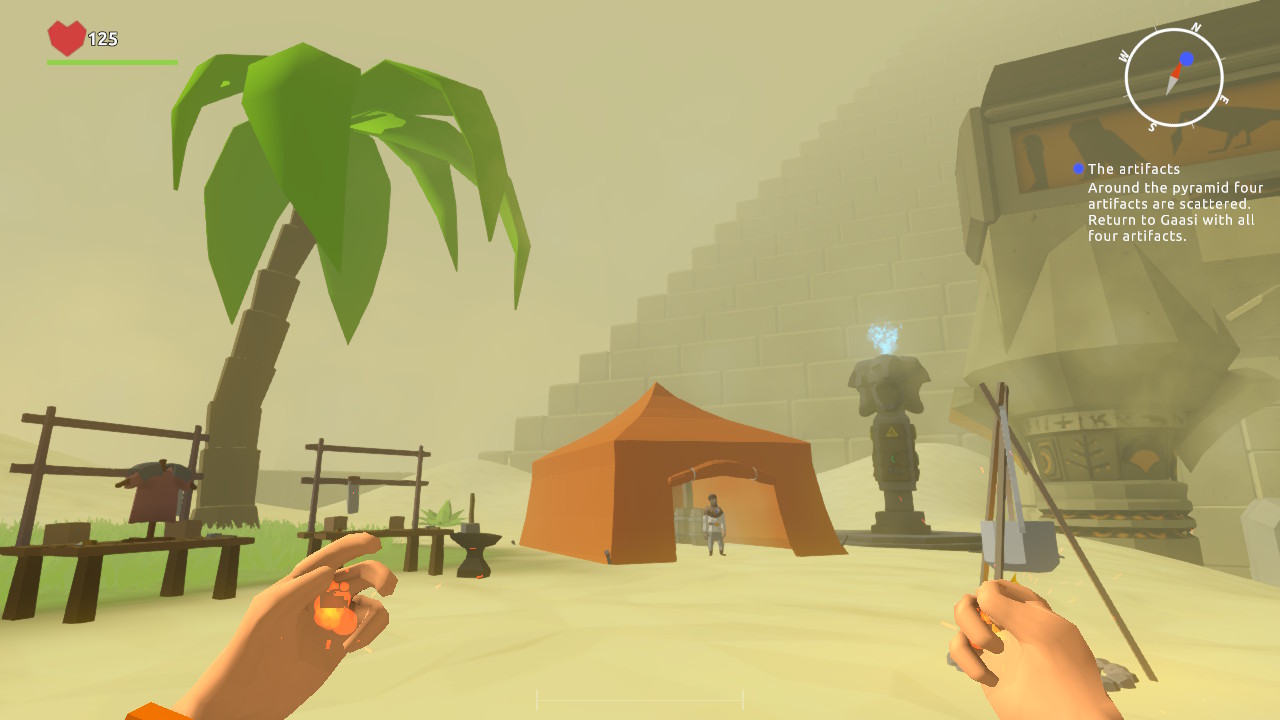 It didn’t take me long to start feeling one of Windscape’s main issues: the world feels flat and empty, but not in a landscape fashion. Rather, objects in the world look flat AND boring, the battles are lifeless, and it often feels more like a running simulator than an actual game. Windscape touts a “unique art style” and while you won’t notice it right away, once you’re aware it can never be unseen – exactly like the Wilhelm Scream. Windscape is best viewed with a wide-angle lens. The scenery shots standing on the hills overlooking the city or standing underneath the massive pyramid feels really impressive, and these are the times when Windscape has some real charm. It’s just too bad this feeling doesn’t permeate the entire game. Basically, leave your microscope at home and don’t look behind the curtain if you want to attempt to enjoy it. 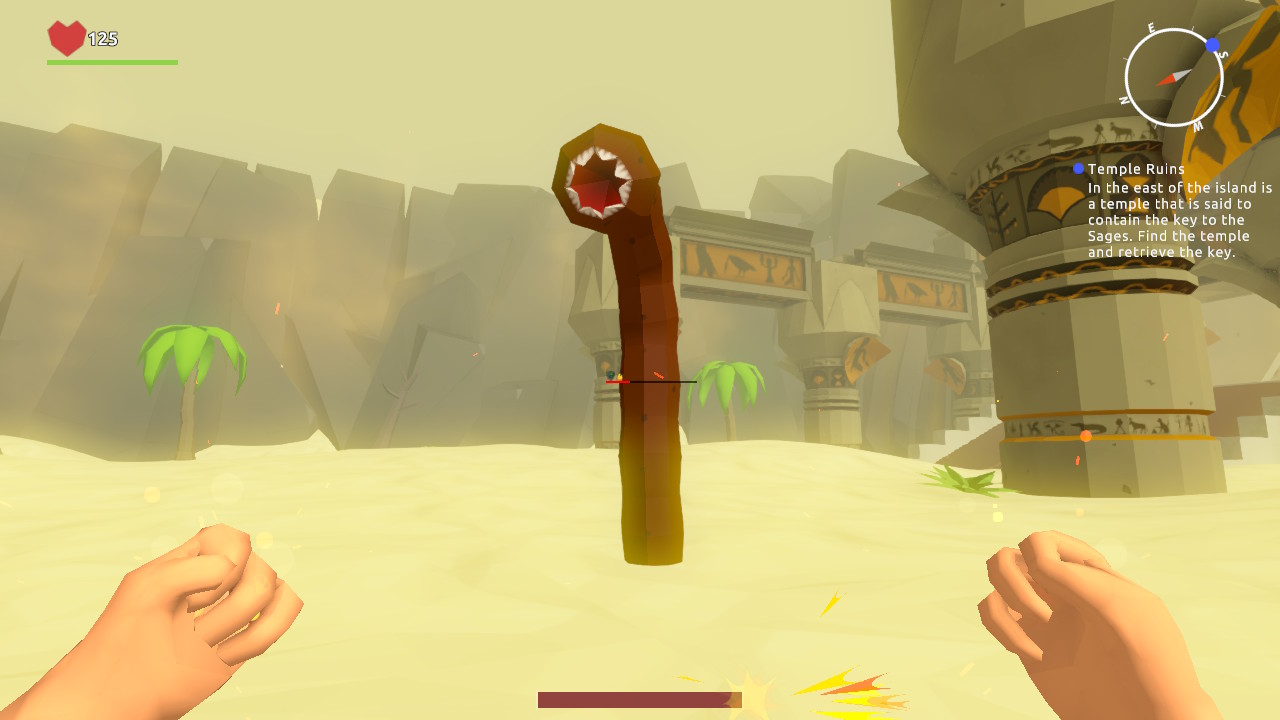 Windscape created this entire world, filled it with creatures, harvest-able items, and people, then gives you a minuscule number of weapons and armor pieces you can make with it. The variety of craftable items is definitely a letdown, with only minor variances between the different weapons. You obtain crafting components from harvesting trees, bushes, monsters, and plants found throughout the world. I actually didn’t mind running around collecting components though, and this is one of the few things in Windscape that actually feels like it belongs in the game, not an unnecessary addition or a “just because”. But belonging in the game and it actually being interesting content are two separate things entirely. 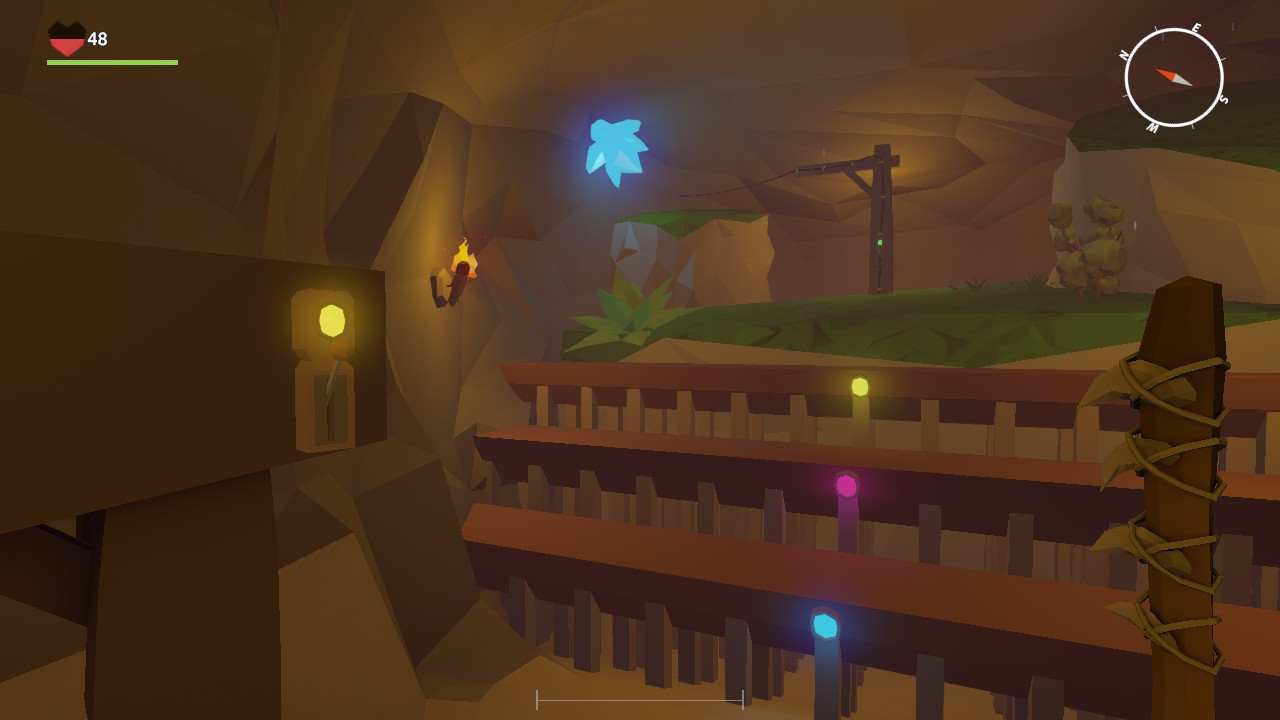 Throughout the story, you will come upon puzzles and platforming sections that need to be solved in order to continue. These were not too difficult and they only took a few tries to complete. I actually liked the one with the moving platforms above a pit of spikes because it took more than a few brain cells – and some agility – to complete without first succumbing to the trap. That said, I wouldn’t call Windscape a puzzle game, or even an adventure game with puzzle additions as there’s just not enough of them for it to really count. 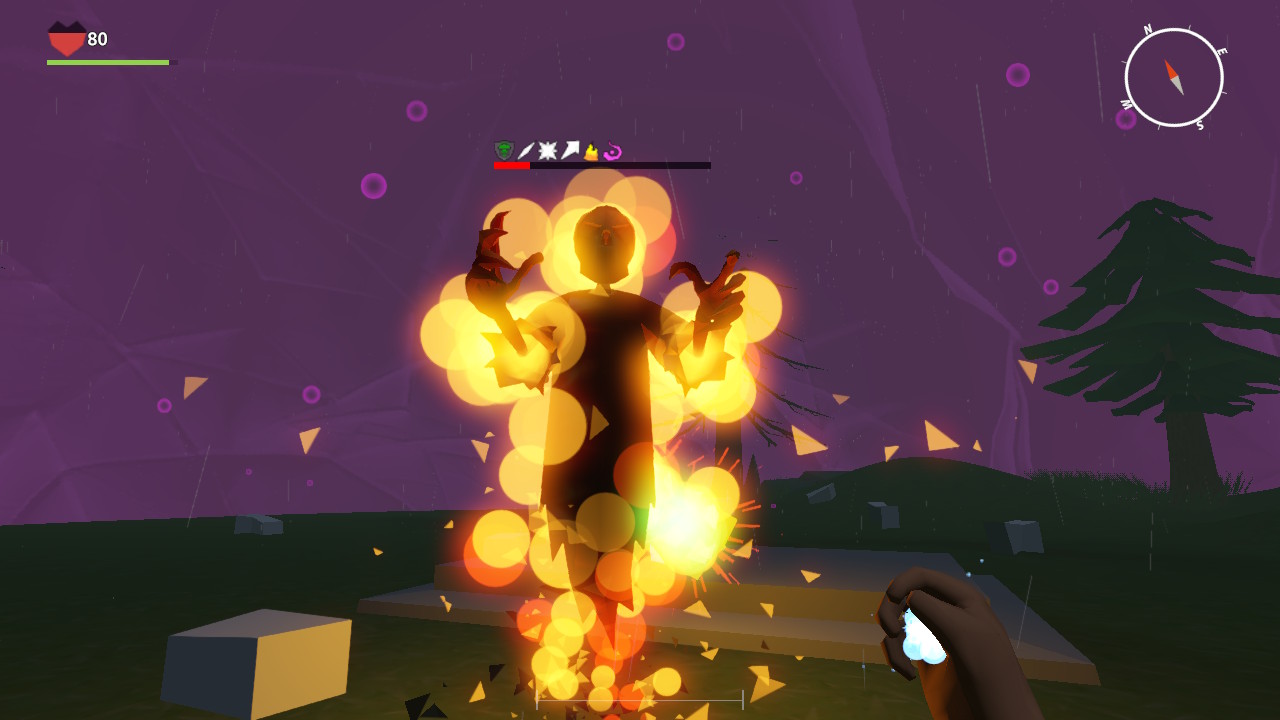 Windscape has a number of bosses (and enemies) you must face, and they typically have certain types of attacks they are more susceptible to, which are displayed via the icons above their health bar. This is useful for understanding that you should use fire attacks on ice mages, and ice attacks on fire mages…maybe you should write that one down, for future reference. As fancy as the strength/weakness concept is, more often than not – and due to the lack of dynamic weapons – you end up using whatever your most powerful attack is to bust your way through any situation.

Bosses, in particular, feel a lot like HP tanks even when you’re using whatever attack you’re supposed to be using. The good news is that all of these bosses can be avoided simply by kiting them across the level until their HP dwindles to nothing. Seriously, the main tactic to fighting mobs and bosses in Windscape is to run around, just outside their damage areas, until you deal enough damage. There’s nothing special to see here, move along to the next stop, please.

Bugs are the Real Monsters 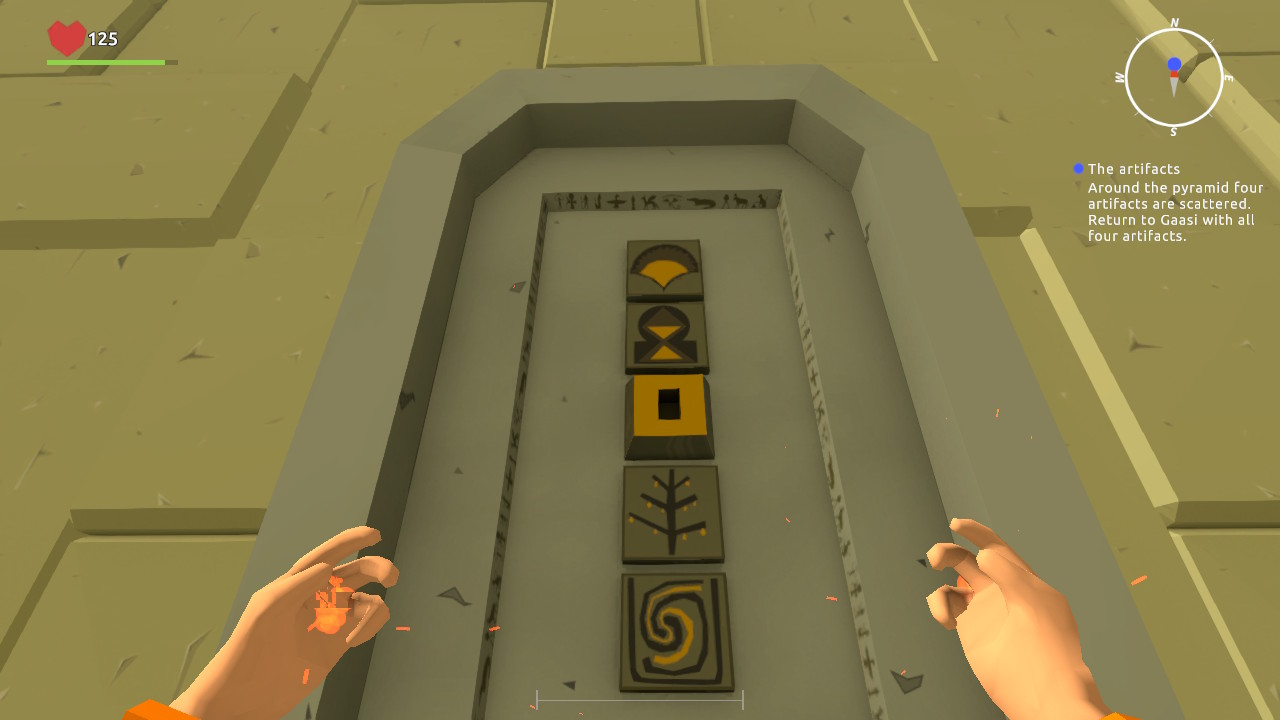 Windscape has its fair share of bugs. I found numerous locations where my character got temporarily stuck amidst landscape elevation changes. Questionable design decisions run rampant too – which I’m calling bugs – within core Windscape features. For instance, when fighting and charging up an attack, there is a delay before the swing actually hits. This is fine because I realize we’re not all flash beings, and hitting things takes just a hot second. But during this delay, you can raise your shield, negating any damage that you may have opened yourself up to when charging up that attack for too long.

It almost feels like cheating, and it probably is cheating, thus I question whether anyone really playtested Windscape. I even found a bug where, upon dying, I lost a key item. I could not revert my save and I could not regain this key item, leaving me to restart the game from the beginning if I wanted to progress any further. Windscape definitely feels like a title that should remain in early access and not be released on Nintendo Switch. It’s just not ready, and this is pretty obvious once you really get into it.

We’re Not Going to Make It 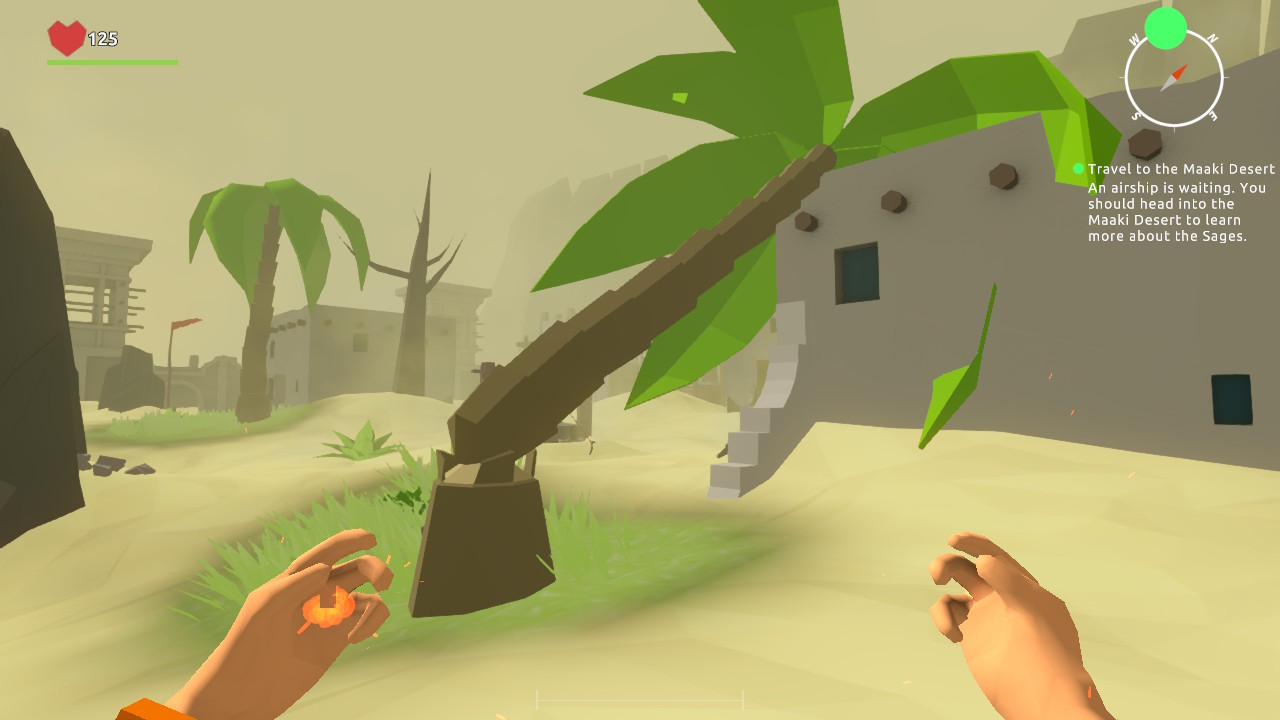 I don’t think any of us will make it out of this alive if I continue. There’s more here to talk about but it’s not worth the effort. Windscape reminds me a lot of a Mimikyu – a soulless husk of a puppet that’s pretending to be something it’s not. This game is a shell of what it could be given enough time, money, and effort, and I truly hope it continues down a better path via post-launch fixes. It could be a fantastic game with some real charm, but instead just falls flat on its face. I’m giving this the infamous BAD rating for now, but I’d be happy to revisit if they ever decide to fix what is necessary to make it a better experience.

Damn! That’s a shame, thought this looked good from the trailer but seems execution has let it down. Hopefully more content etc gets patched in and the game evolves but if this is the finished release, I’ll be avoiding it like the plague!