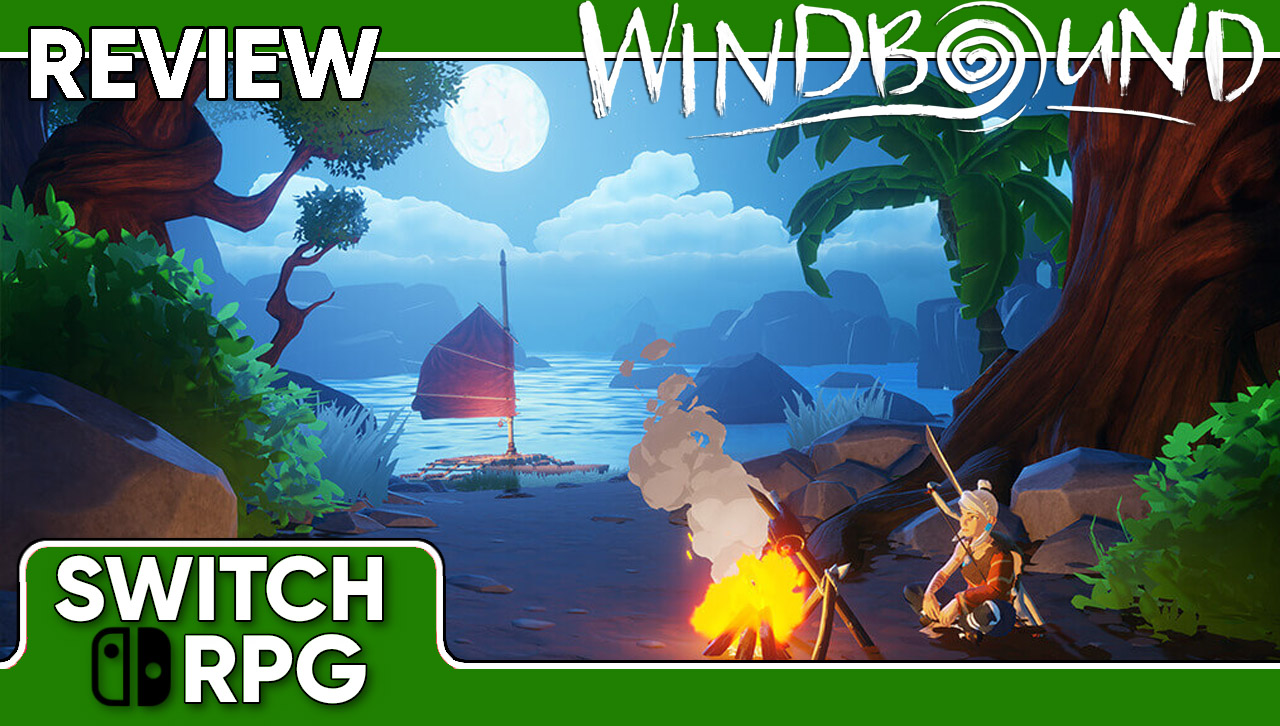 Imagine, if you will, a game that isn’t an RPG. Yes, I know that The Legend of Zelda series immediately sprung to mind, which is good! There are plenty of entries in the Zelda series that wouldn’t make the cut as RPGs, one in particular being The Wind Waker. But what if The Wind Waker were an RPG? You might say that the game would need an extensive crafting system, a progression of tougher enemies to handle in the mid-to-late game, and maybe even some roguelike elements? Eh, sure, why not? Throw in some big boat mechanics, and maybe you’ll have something decidedly not-Zelda, less of a Wind Waker and more of a… Wind BOUND.

Windbound is a combination of Breath of the Wild’s survivalist theming and gameplay mechanics with Wind Waker’s sailing. This is where the similarities end, though that shouldn’t, and in fact doesn’t, make these inspirations any less evident. So much of Windbound is all about scavenging for resources in a way that is a bit more permanent in comparison with Breath of the Wild’s own, transient systems. There are many items in Windbound that will break – tools, weapons, your boat itself – but there’s also the degradation of consumable resources at play, here. Your food, whether carved from a dead carcass, plucked from a tree, or cooked over a fire, won’t be good forever, and though animals will respawn on the various islands you visit throughout your journey, there’s more to be done than simple survival.

Windbound is more or less a nonstop mission to gather materials, whether for crafting additions or enhancements to your boat, Kara the player avatar, or for new weapons to hunt and slay animals. You need food to survive, as a lack of sustenance will drain your stamina, and no stamina whatsoever will then drain your health. Death is a harsh penalty in Windbound, as the default difficulty will kick you all the way back to the beginning of the first chapter with only your crafted tools at your disposal – no boat, no weapons, and no food. If you want to get back to where you were, it’s a slow and steady crawl across several islands in order to do so. 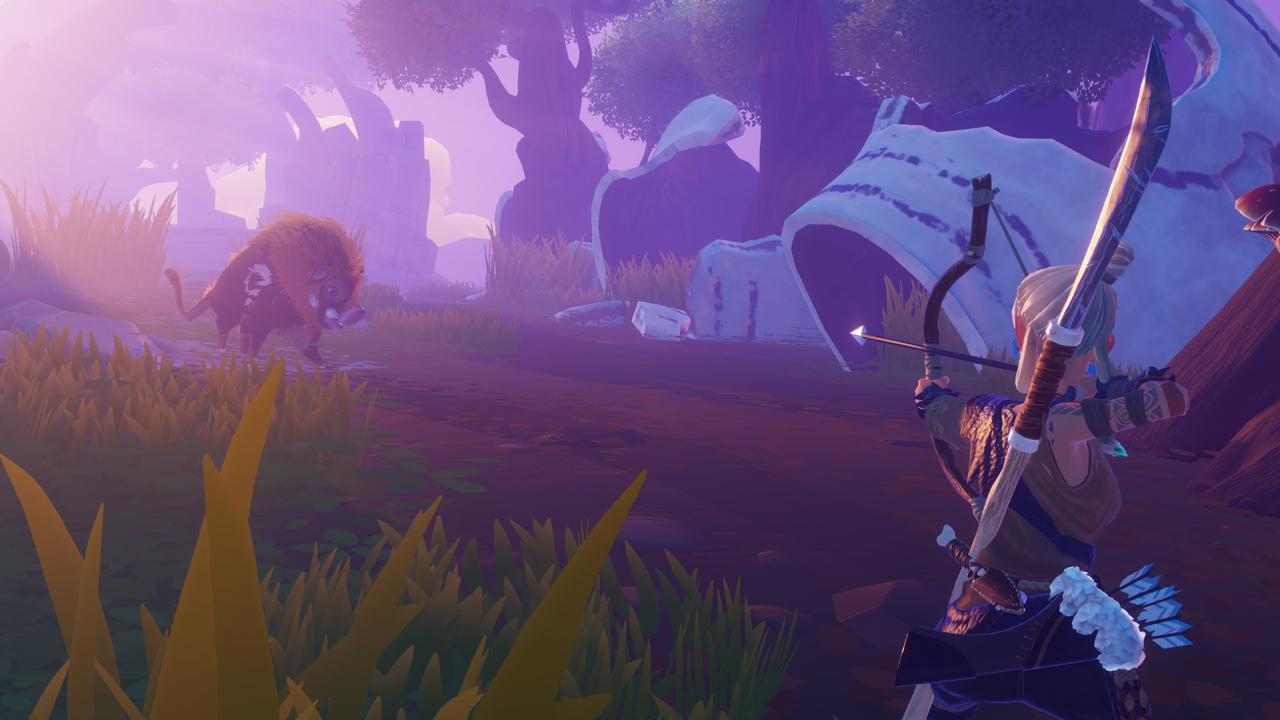 Each chapter of Windbound has the player activating a trio of beacons in order to progress further, which are located within a somewhat vast, but ever-randomized enclosure of sea. You’ll start with a simple canoe, which can be gently paddled from one island to the next, but more efficient sailing will require a raft, equipped with pontoons and a sail. Even then, the wind may or may not always be at your back, so you’ll need to plot out what locations you visit strategically and make sure you maximize the resources on each. Some islands can be large and dense with resources, while others might possess a single defining feature and a few sparse gathering spots. There’s a variety of flora and fauna to be encountered, some exclusive to certain chapters and biomes, but very few are life-threatening. You can outrun most aggressive creatures simply by sprinting from their usual territory, and hazards like cacti and exploding poison bulbs aren’t hugely detrimental. You’ll spend most of your time hitting the objects you’ve become increasingly familiar with in order to get the basic necessities that help you survive.

Windbound’s greatest challenge comes in the form navigating its crafting menus for just about everything you need. Its crafting menus take up the entire screen, half for the list of objects you can make, the other half displaying your inventory of available items. In the early stages of the game, crafting is immensely frustrating, due to each new item taking up a slot in your inventory. You want to make sure you exhaust an exact amount of resources in order to get what you need and have the space to hold it. There are inventory expansions you can craft, as well as storage on your boat, but remember that both of these will magically vanish if you should take lethal damage and the game becomes more of a cycle of doing what is absolutely necessary in order to survive to the later stages for better gear rather than experimenting with play style.

I tend to think I have a decent understanding of wordless narratives, and some games execute the concept effectively enough, but Windbound’s own story feels impenetrable to me. A giant nautilus is angry and shipwrecks the protagonist’s boat, only to cause her to sail the same set of purgatorial seas endlessly until she activates the towers containing shell shards, a sort of meta-currency that can be used to buy upgrades but is also apparently something else? It’s… a bit confusing. The Oar of the Ancestors granted to Kara is apparently a meaningful artifact, but the character we inherit has no sense of growth, only stopping to view a series of murals that reveal themselves after each waypoint is passed.

There’s something to be said about a relationship between the natural world and its abuse, but it’s all a bit too subtle and fails to take shape, as flavor text is only revealed to the player after they activate each beacon, which is a moment of triumph, but too infrequent to feel like a cohesive narrative is forming. Similar text blurbs will appear sporadically when chancing upon certain ruined settlements, which implies that civilization has come to ruin due to the abuse of nature. The abundance of wilderness and absence of other characters is another indicator, which lends itself to the roguelike isolation of the experience, but doesn’t help much overall. 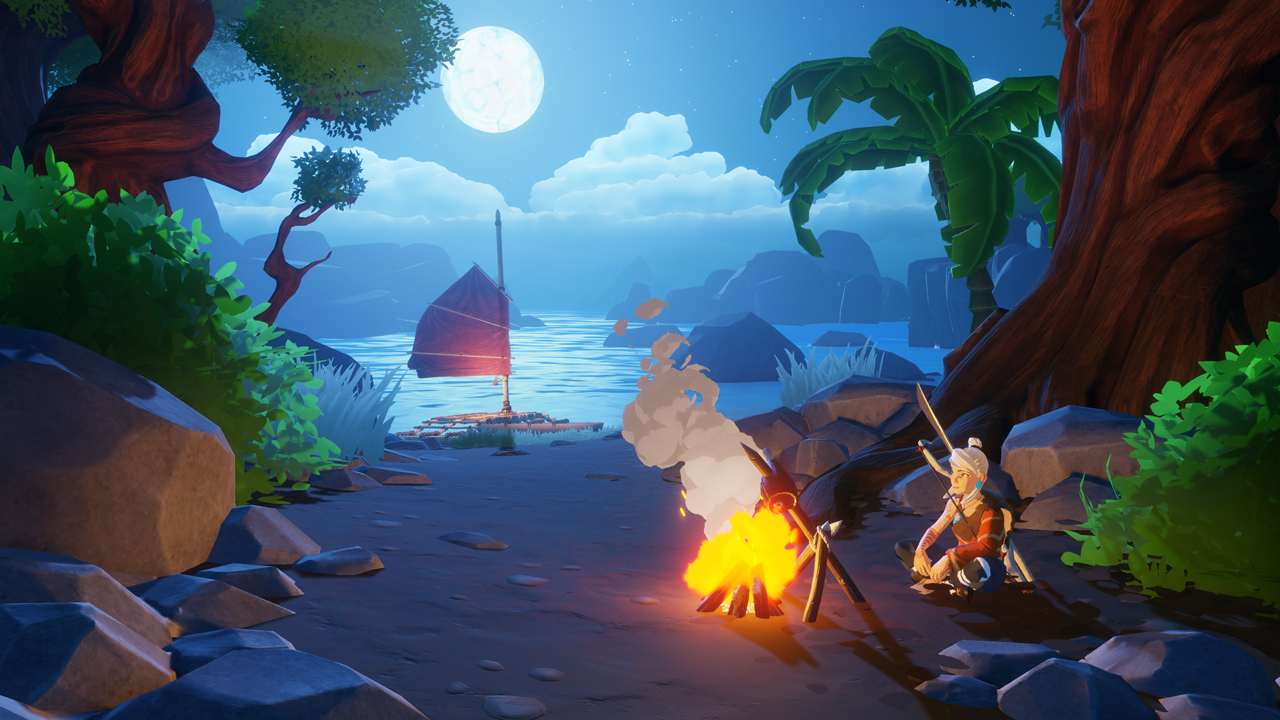 In terms of art style, Windbound is certainly channeling a certain open-world, hang-gliding, survivalist title, but it is a bit more inventive with its creature designs. While you’ll only be fighting a limited number of feral beasts, each is distinct enough from real-life and one another to be easily identified. The same goes for the environments – rock outcroppings, foliage, and other features allow each kind of biome to be easily spotted from a distance (when the draw distance is feeling forgiving), and lend an air of excitement to the proceedings.

Likewise, some of the gear and tools you’ll end up crafting for your avatar are very unlike that which one might expect from the titles that Windbound is inspired by. The ocean is a bit more colorful than those seen in Zelda titles, featuring coral reefs, swarms of jellyfish, and the occasional mountainous rock outcropping. Outside of this, Windbound has a few stunning skyboxes to appreciate, but many of its fog effects feel a bit too absolute on the Switch, obscuring what is a fairly pretty game in full.

If you’re hoping to find a title with puzzle solving or adventure akin to a Zelda title, you’re likely better off looking elsewhere. The combat in Windbound is unfortunately not polished enough to feel satisfying, as much of enemy AI can be predictably goaded into certain attack behaviors that are easily telegraphed and avoidable. Though there are six or seven aggressive enemy types in the game, you’ll find yourself engaging with some far more often than others, which seem to generate in much lower quantities only in the back half of the campaign.

And speaking of the campaign, it is a brief one. You’ll go through five randomly generated seas, each adding a new sort of biome with exclusive materials for use, followed by mandatory sailing sequences that will more or less test the hardiness of your boat. I don’t know if the sailing sections are intentionally cumbersome or not, but there’s a great deal about Windbound’s sailing mechanics that cause frustration. The mandatory sailing sequences between each open-survival section feature currents that cause the water to swell, but they will also jerk your boat to a halt if you should sail with too great efficiency and stay on the edge of them. I also experienced a number of random boat-flips in the final sailing section, which may or may not have been intentional? It’s so hard to tell with the system that’s currently in place.

Sailing on the open seas can feel aggravating due to how frequently the wind changes direction, and how sporadic that direction feels. Sometimes the wind feels as if it does a quarter rotation, other times, it will flip entirely, turning what might have been smooth sailing into a harrowing crawl. I’m not sure if the developers intended to cause the player to build canoes in order to mitigate this issue between smaller distances, but considering boat construction is such a key aspect of Windbound, I wish constructing a larger and more complex vessel felt rewarding. 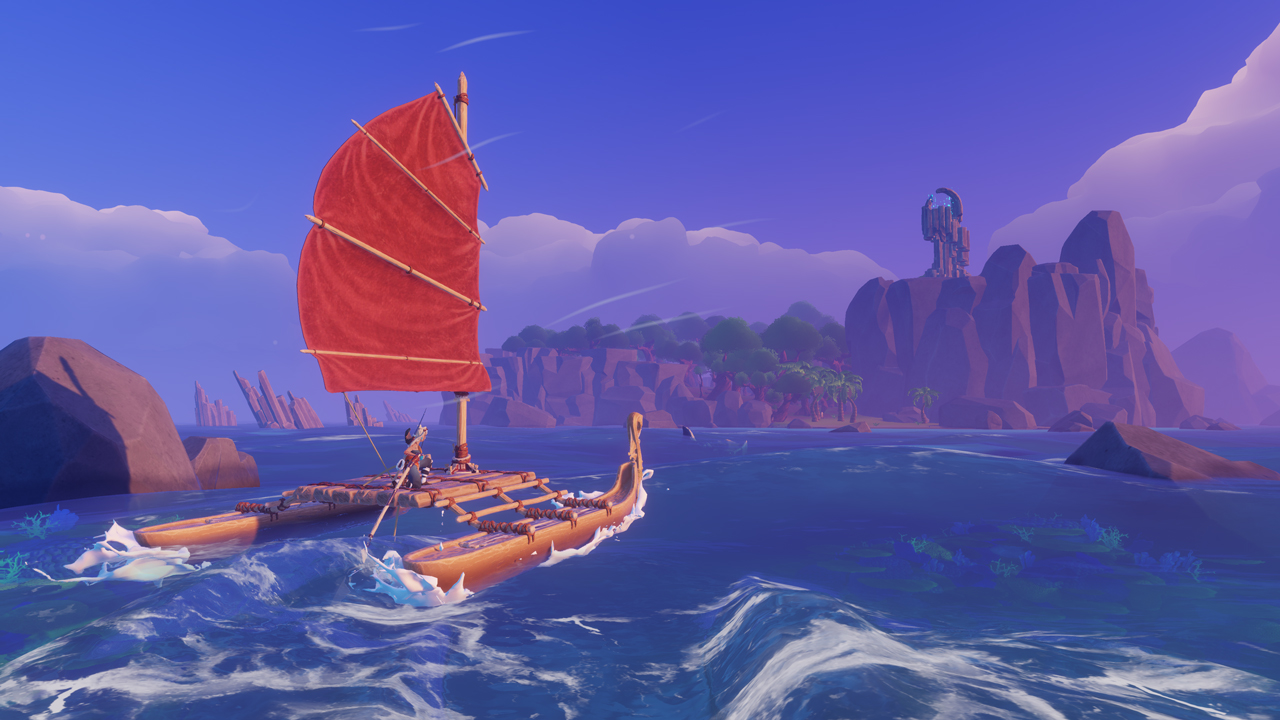 The modular nature of boat construction really is the most fascinating and compelling element of Windbound, and in terms of how large you can construct your vessel, the options are expansive, though costly. This is perhaps the most frustrating aspect of playing on the game’s survivalist mode, as you will feel more pressure to keep Kara alive than you will in maintaining your vessel. Luckily, there have been updates that have made the adventure mode more agreeable, but the fact remains that Windbound plays a dangerous game of ship building and tedious survival simulator, without ever feeling like it does either exceptionally. All in all, if you’re looking for a brief sailing experience, you’ll certainly find it in Windbound, but you’ll need to manage some other elements carefully if you want to take full advantage of all that its robust modular ships have to offer.