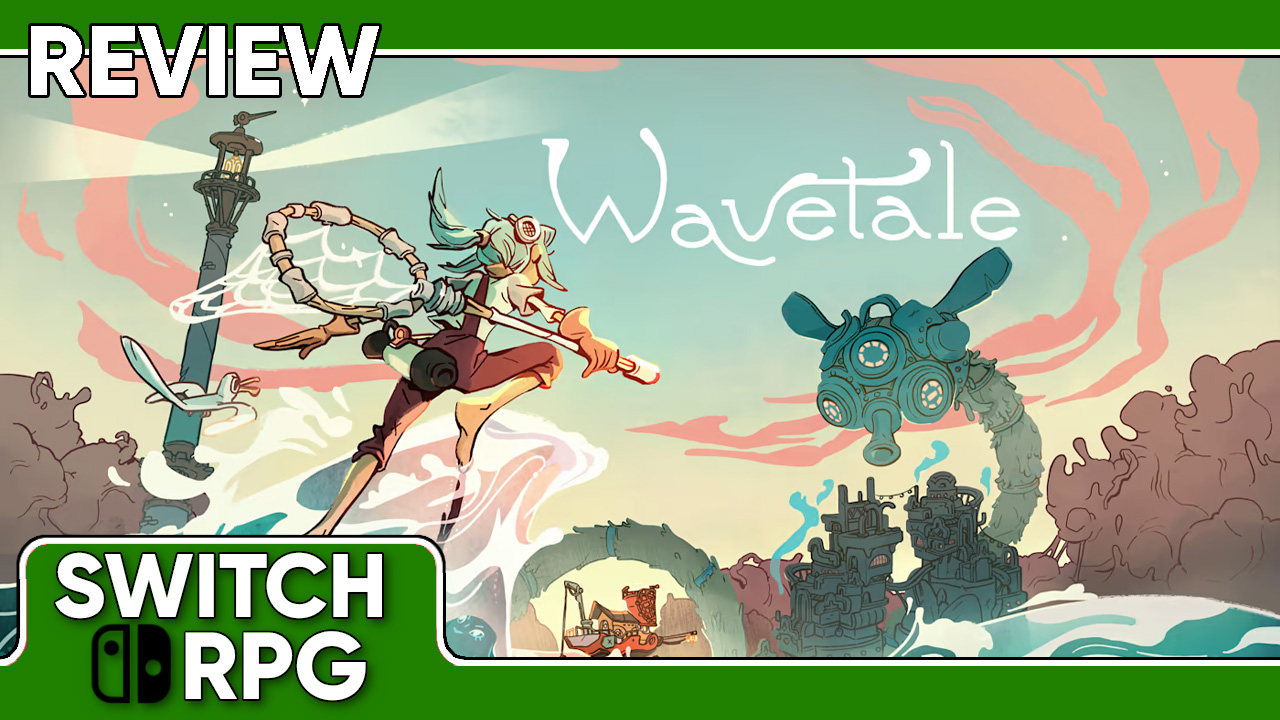 Wavetale surfs its way to the Nintendo Switch after previously being a Stadia exclusive, and it’s good to see some of those games live on after the console’s demise. Wavetale was developed and published by Thunderful, who has published some great indie games on the Nintendo Switch, from the Steamworld series, Lost in Random, Lego Bricktales and now Wavetale. Let’s jump into the water and see how this adventure fares. 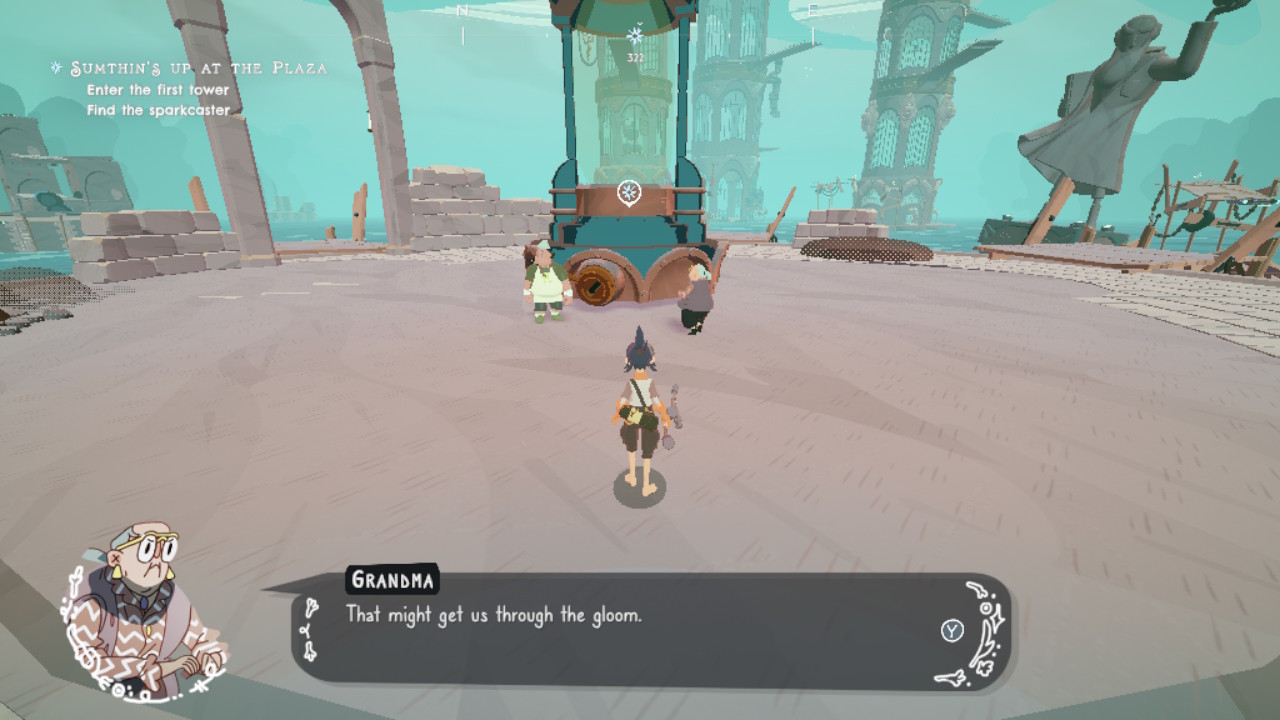 In Wavetale, you take control of Sigrid, the game’s protagonist, who lives on the island of Standville with her grandmother in a post-apocalyptic world. Her grandmother isn’t always the easiest of people to deal with and both of them are responsible for keeping the lighthouse running to keep the fog at bay. The fog, or Gloom, is kept at bay as long as they keep the lighthouse powered with sparks.

The grandmother seems to be set in her ways and is self-sufficient for the most part, which is evidenced early on by her conversation with Baine about a Dirty Paws sighting. Shortly after this encounter, a Gloom wave approaches and engulfs the island. After the wave subsides, Sigrid is stranded on a small island and meets a dark, shadowy character swimming beneath the water. This figure grants Sigrid the power to walk on water.

Prior to getting her newfound powers, Sigrid was dying for an adventure and with her new powers, and the Gloom having taken over her island, she is finally able to set out on one. She must power the light house to save her home from the Gloom but soon realizes that it’s not just about saving her home, but all the other nearby islands as well. Throughout Sigrid’s adventure, you will learn more about her family’s past and the choices that were made, especially those of her grandmother. Some of the choices made turned out to be mistakes, and Sigrid gets to see how those affected the world.

Ultimately, she learns it’s never too late to act and acknowledge them as she traverses the decaying archipelago of Standville to save it from the Gloom. Overall, I liked the storytelling in Wavetale, especially the dynamic they crafted between Sigrid and her grandmother as you learn about their family’s past. 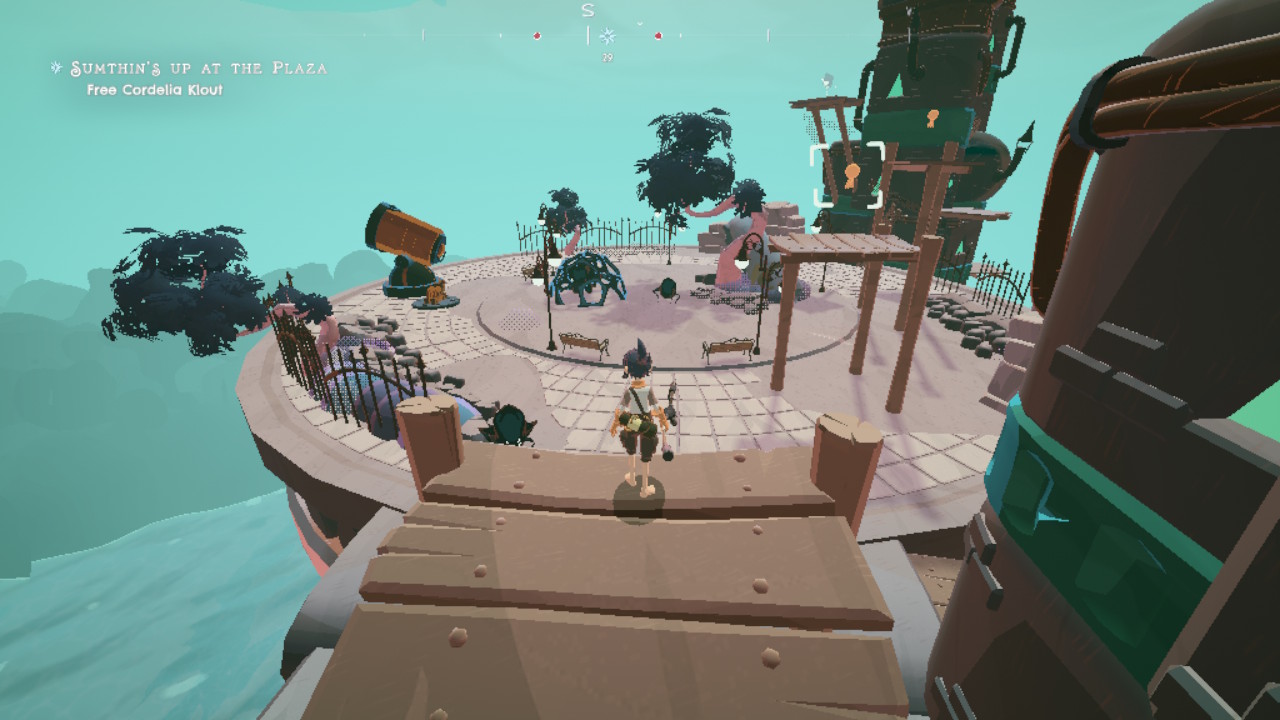 As you traverse the world of Wavetale, attempting to save it from Gloom, you will do so by a couple different means: surfing on the water (or walking using the power Sigrid acquired) or using a grapple ability you get early on. A majority of the game sees you using these abilities to get from one objective marker to the next, and so on. Sadly, combat takes a back seat in this game and I was hoping it would be a balanced split between combat and exploration, but the combat, while present, is for the most part pointless and can be avoided save for a few exceptions. The combat consists of you fighting these blob type creatures formed from the Gloom, which you can mindlessly hack away at using your light and heavy attacks. Later on, there will be some evolved versions that have armor or can walk on water, but none of them are difficult and all can be taken down with a few swings. 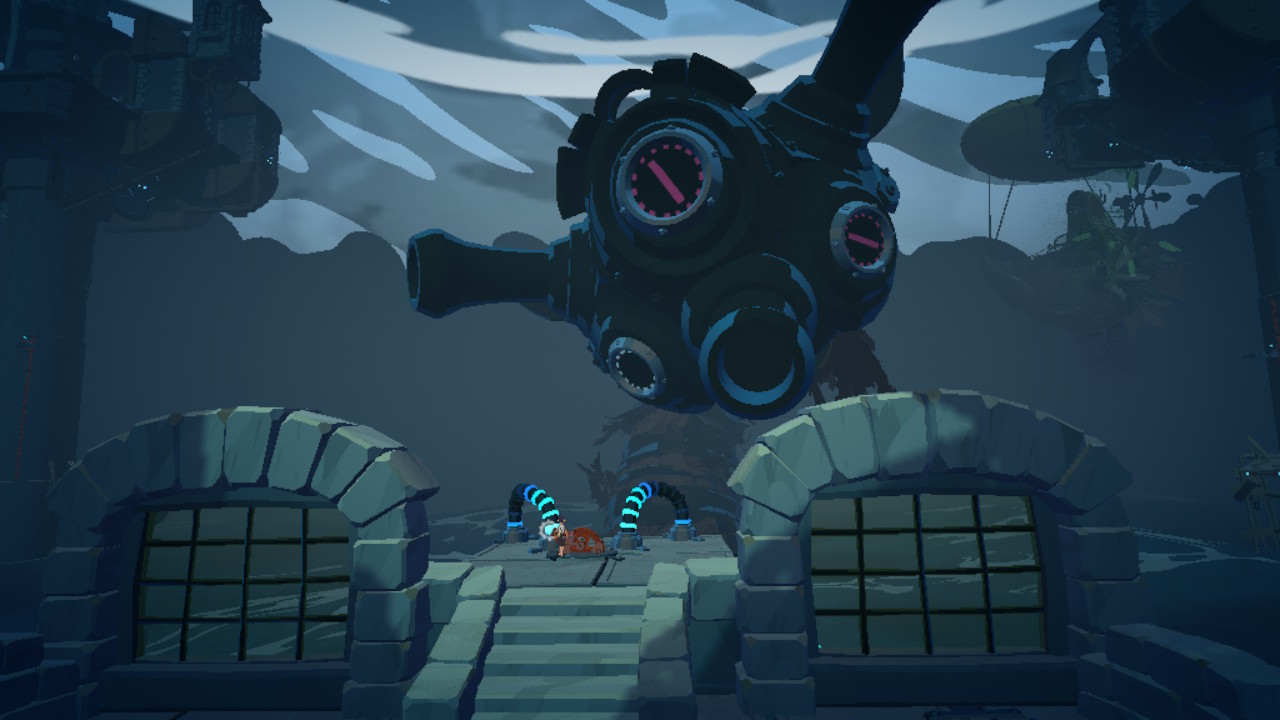 Sigid’s net has a light and heavy attack, but since the combat is very laid back in Wavetale I found spamming the light attack was more than sufficient. Sigrid also has a notebook which keeps record of various story aspects, provides a list and explanation of her moves and abilities, and acts as an in-game map. You have some limited options of customizing Sigrid’s appearance because as you traverse the world looking for sparks, you will find these orange blob-like objects which act as the game’s currency to change her appearance, shirt, pants, hair color, etc.

There are a couple side quests and time-based traversal challenges outside of the game’s main story which will take you between 4-5 hrs to complete. Some of the side quests can be obtained from speaking to some of the NPCs on the various islands and they will ask you to find a specific person or object, such as an engagement ring and return it to them. I enjoyed the traversal aspects a lot, especially when you can chain double jumps, gliding, and surfing to cross big areas of the maps quickly and with ease. However, I was really disappointed with the combat aspects as they felt more like an afterthought. 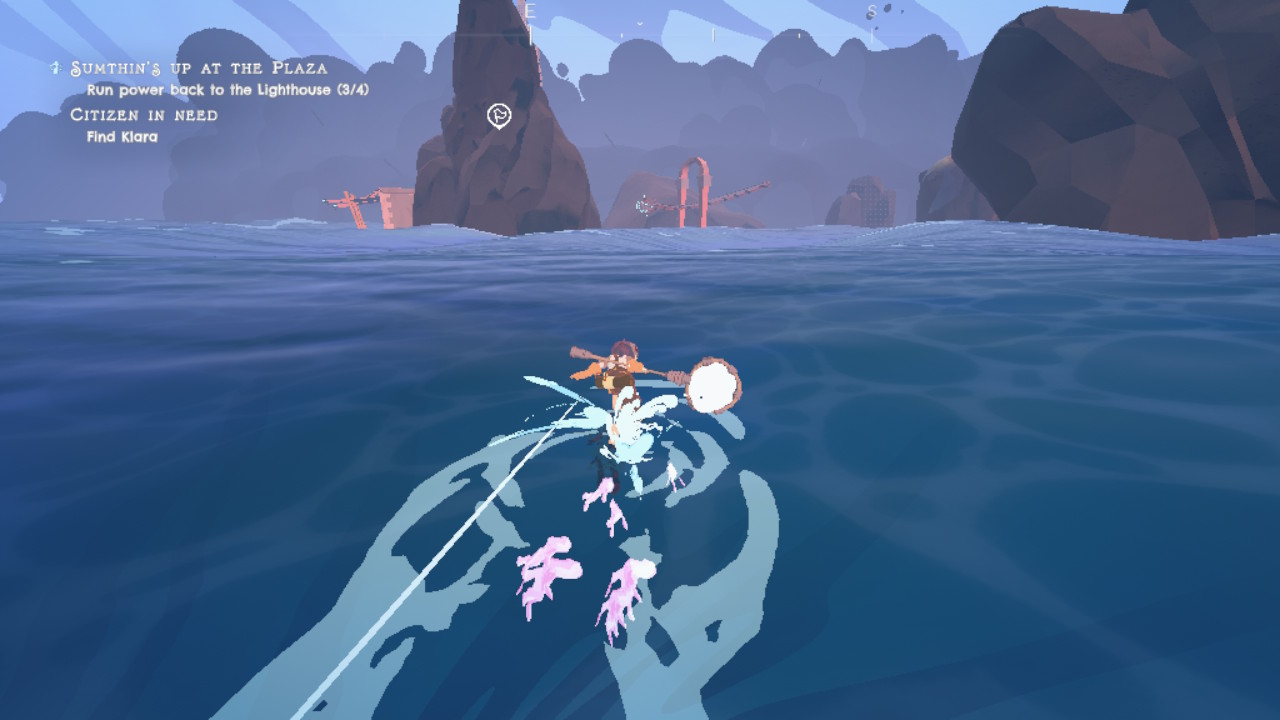 Wavetale looks gorgeous. The developers did a great job building the world and getting the ocean concept to work and feel alive. The game has a lot of vibrant colors which work well to play off the dark grays and blacks of the Gloom. A lot of the game is voice acted which is a nice touch, especially for an indie game when we don’t even see that as a standard for all AAA games. The music is great also, and makes exploring and traversing the ocean even better. 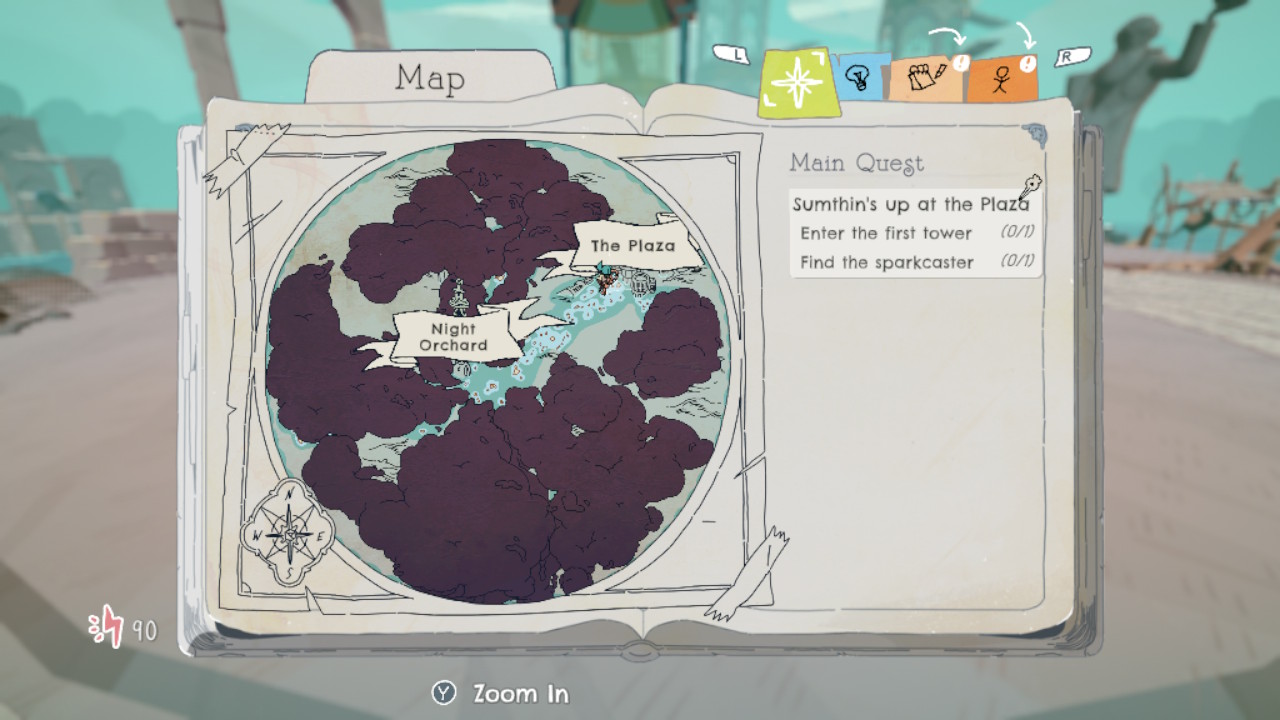 While Wavetale tells an interesting story about family and has great exploration, I was a bit disappointed by the lack of depth to the combat. I would have really liked to see it play a more integral part of the overall experience as I felt the gameplay loop was just a bit too repetitive without it. Constantly going from one objective to the next and flipping some switches or collecting three sparks to fill a tank, with no combat to break up the traversal, just wore on me. If you are looking for an approachable, zen/chill game or one where you can just surf the ocean to your heart’s content, then Wavetale can scratch that itch.

The game even has a gigantic mechanical sea monster that you must defeat, but doing so is done from a traversal approach of ascending towers and the beast to hit a switch plate. Allowing Sigrid to have some character development as far as abilities are concerned over the course of the story would have gone a long way into making the overall experience feel a bit more deep and satisfying. Maybe my expectations were simply off for this game, but regardless, if you are looking for a relaxing experience, go on an adventure with Sigrid!