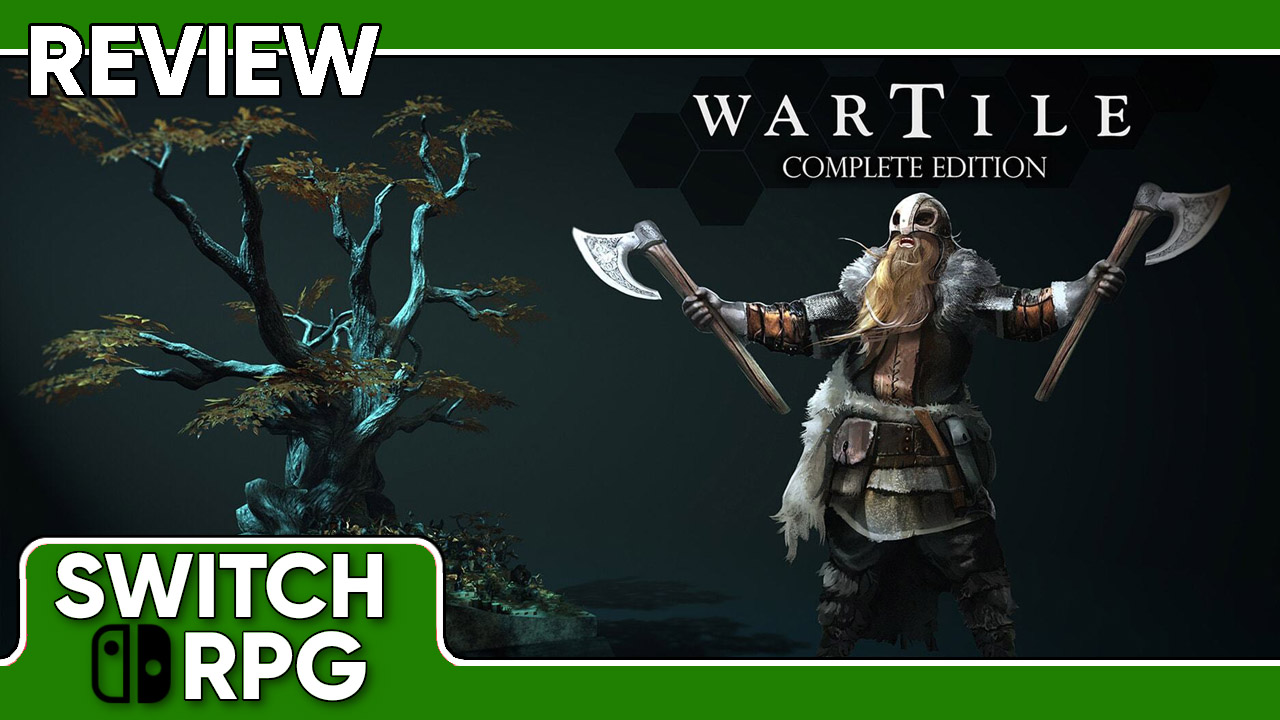 You’re perusing the eShop for Viking-themed games, when your eye suddenly lands upon Wartile. It’s a grid-based strategy title that simulates some tabletop mechanics, such as card game deck-building and large-scale, “real-time” army-based mechanics from titles like Warhammer or Pathfinder. Could this be the Viking-themed game of your dreams? Is it at least decent at replicating a tabletop-style experience? The only person with enough concentrated, yet insane devotion to tabletop-inspired RPGs on this site is ME, so I guess…

I’ll be the judge of that.

Wartile has you taking a warband of Viking characters into beautifully detailed, bite-sized diorama maps with the intent of completing a primary strategic objective, as well as any secondary contextual missions doled out along the way. The primary objective is the only one required to complete a map, but secondary objectives will net the player more experience and rewards, which can have benefits in the long run. These combat scenarios are played out on hexagonal grids, with a (mostly) real-time combat system.

The left control stick doesn’t allow you to move around the map, instead, it is a means of cycling through your units as they appear on the battlefield. Depending on the order in which units were selected before the start of a map, you will cycle through them by pressing left or right on the stick. It feels like an underutilized means of input, but it works well enough in its base form, allowing you to snap to other units for quick selection of abilities and movement in combat, where its inclusion is most beneficial. When you aren’t engaged in combat, you can hold the A button on a selected unit to open their movement options, which is usually a limited amount of space before they enter into cooldown. Holding the X button instead will allow you to direct your entire party, which can be useful for navigating the large environments without splitting your team up, though this isn’t always the best option for covering ground, unlocking chests, or setting up a strategic ambush. 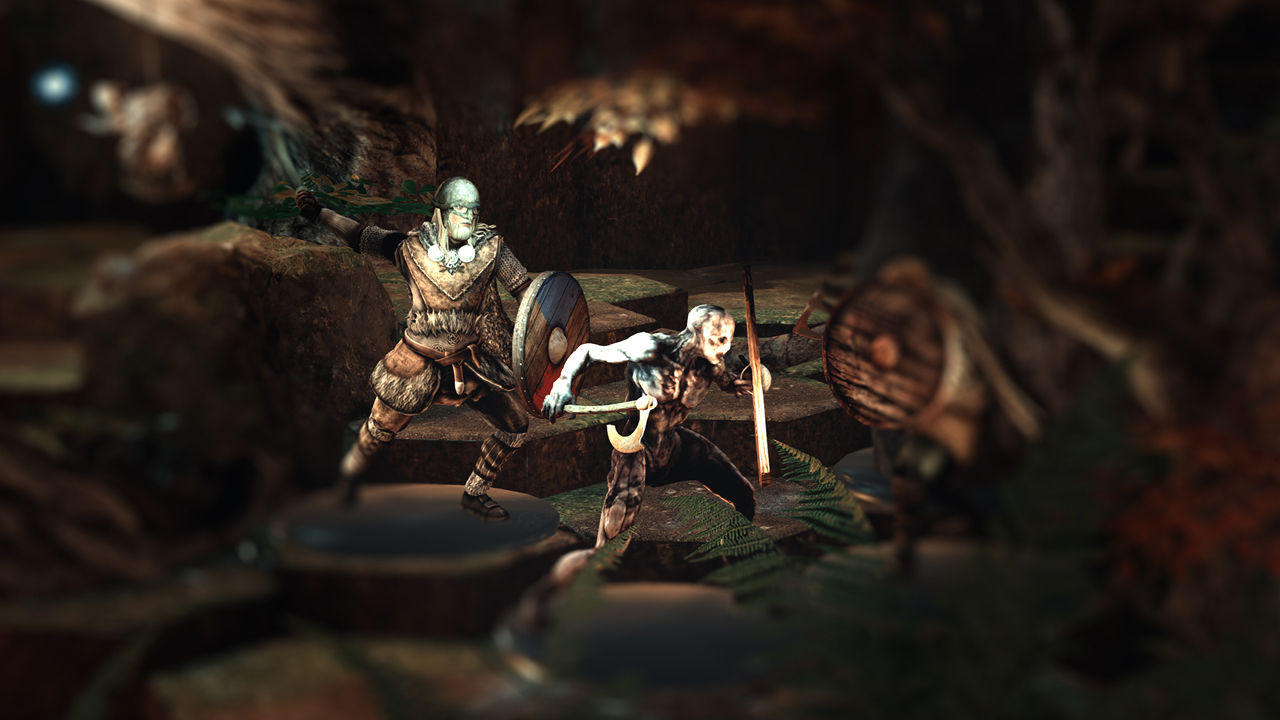 Combat automatically begins once a piece enters the range of an enemy unit’s vision, and these little figurine units will automatically attack their nearest opponent, though their attention can be directed elsewhere. Pressing the R bumper will draw up a unique character skill or items in their inventory, while the L bumper will pull up a card from the deck of special abilities you’ll preset before a map. Both of these categories can be attack, trap, heal, or buff or debuff abilities, but the former group operates on cooldowns while the latter is executable based on a pool of mana that you’ll stock by thoroughly exploring maps and defeating enemies. Balancing all of these elements is relatively easy thanks to the fast selection tool in addition to the slowdown mechanic that occurs when either card menu is engaged, or can be toggled in battle when nothing is selected.

In between maps, you’ll have access to various menus, such as a shop for purchasing equipment variants, a loadout screen for each playable character, a party screen, and a mission select screen. Performing well in certain scenarios will allow the player to unlock harder difficulty versions for your updated warband’s strategic pleasure. While the menus can be cycled through by using the ZL and ZR triggers and L and R bumpers, there are some control stick-based inputs needed to navigate some menus that feature a great deal of dead space in their input, often leading to ambiguous or confusing navigation.

Wartile’s environments are all based on a hexagonal grid, and while some elements of these maps overlap certain spaces for a more organic feel, the game’s diorama set pieces are highly stylized to reflect this particular geometric design. Though far from lifelike, the mid-polygonal style used to craft these environments is especially pretty when completely zoomed out, taking on a very organic and pleasant look. Little details are tucked into all sorts of corners – a frog hiding at the foot of a craggy cliff, a fish suspended in midair, and lots of suitably atmospheric lighting to be had. Zooming in on things will reveal the somewhat messy textures and imperfect geometry of certain features, but the game is meant to be enjoyed from a distance.

Characters stay static on their tile markers unless engaged in an action, which assists in creating a tabletop aesthetic. There are multiple animations for each member of your warband, and you’ll find a very similar number featured in enemy units. Truth be told, there’s a variety of factions that you’ll be taking on in Wartile, but most units are humanoid in nature, possessing models similar to those of your warband. While you will be able to customize your party with specific pieces of equipment, many other units will be wearing them, as well. This isn’t necessarily a slight against the game, rather a warning. If you’re expecting some particularly fantastic elements, there is a mythic vein to the title, but it doesn’t reach its most extreme conclusion. 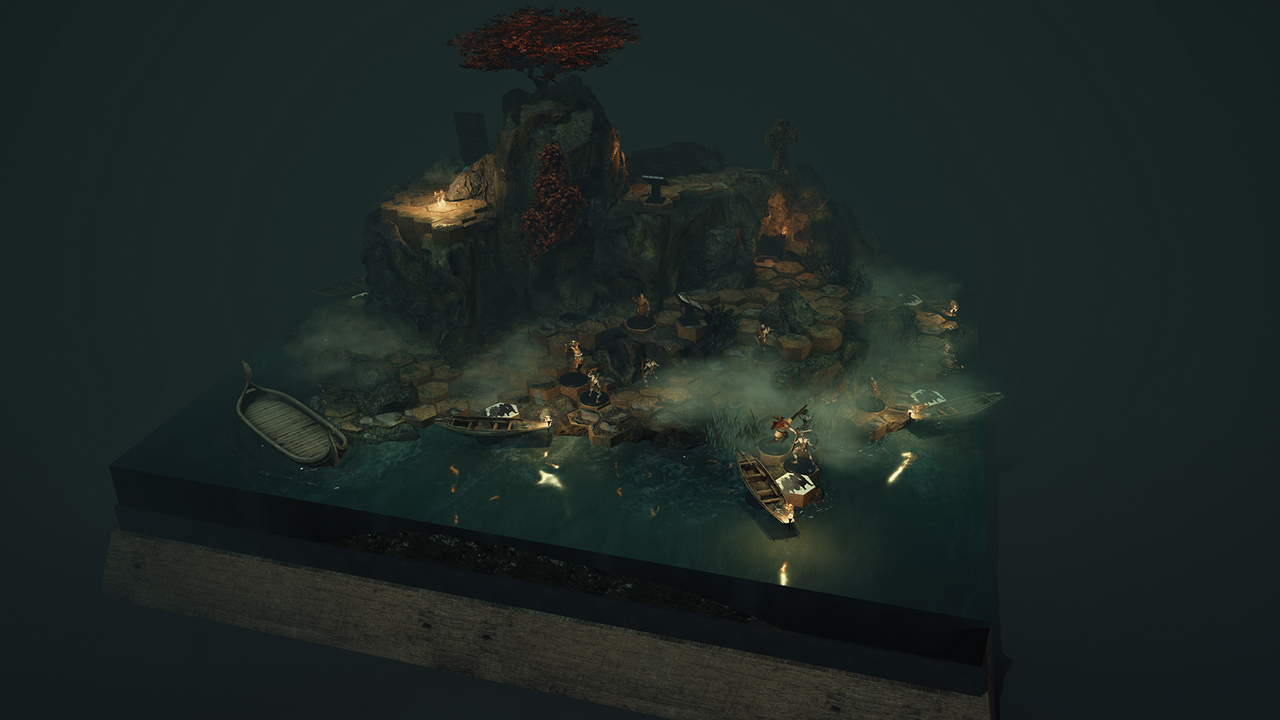 The music of Wartile is excellent at setting a dour, icy mood, as is to be expected from the game’s subject material. Though there aren’t any tracks that are particularly memorable, they serve their purpose well enough and are mixed in such a way that they won’t prove distracting. Wartile’s narrative is voiced by a fairly impressive narrator, who even cycles between certain character voices as the narrative progresses. The narration tracks do seem somewhat compressed, however, leading some of the lines, though clear, to possess a “chunky” sort of sound. The sound effects are much cleaner, however, though some of the area of effect and aiming elements of gameplay could be made a bit smoother to control and view, as their highlighting is hard to view.

Wartile’s narrative is epic in scope but small in scale, as your warband is few in numbers and your goals are relatively tame. That doesn’t mean the story isn’t delivered with a degree of gravitas, but it won’t reach the mythic heights some might expect from its subject material. You’ll set out to cleanse the blight of a plague from your village and become embroiled in conflict along the way, offering decent justification for the various set pieces featured along the way.

Your enjoyment of Wartile will likely skew in one direction or the other based on how much you enjoy its real-time combat elements, though that will be determined once you’ve wrestled enough with the controls. No matter where you are on a map, movement has a cooldown, which means you can only take incremental steps from place to place. Cycling through your party of four is likely something you’ll need to reteach yourself before stepping into a combat zone, if only so you know how quickly you can access certain skills. These control issues extend to the out-of-map battle menus, which can be aggravating to navigate. The character equipment and shop menus in particular feel as if they have a great amount of input dead space, and require the player to scroll through options in order to enter into new sections of the menu in a way I have very rarely seen in a video game. This is probably because it is extremely cumbersome.

Even so, once you become accustomed to the format of its combat, battles can progress smoothly and maps can be completed in modest amounts of time. The cooldown meter featured on each party member’s tile marker is a bit obscured and difficult to spot from afar, so you’ll need to zoom in a bit in order to parse precise moments for new inputs. I was a bit confused as to why the game limits each character’s specific skill to a single option per battle, as I feel being able to select from their set of three would offer more strategic utility, but this also makes units more role-centric, which is never a bad thing for a pure strategy title. The game does a fine job of varying its win conditions beyond simply routing the enemy, and secondary objectives are more specific and enjoyable to complete, on the whole.

Despite being a strategy title, you’ll still need to do a fair bit of map replaying – otherwise known as grinding – if you’re hoping to progress smoothly through Wartile. The rank of the warband is directly tied to what sort of armor they have equipped, and scrounging up funds for properly impressive equipment in the egregiously-priced shop will take repeat runs. Even though scrounging up whatever equipment is dropped by enemies and reselling can net you a bit of cash, it won’t be enough to raise your rank to points where the warband is fully prepared to take on the increasingly difficult enemies. If you’re hoping that your tactical knowhow will circumvent this, you’re sadly mistaken.

Aside from its control issues, Wartile manages to successfully embrace its tabletop roots with fun and visually appealing level design, a variety of objectives, and a mixed squad of characters who feel like logical, nordic representations of RPG archetypes. While its campaign is a modest fifteen-to-twenty hours in length and most of replayability is covered within that time frame, there’s enough variety in warband loadout and scenario design to make this title feel worth its while, so long as you enjoy its cooldown-based gameplay. Otherwise, you might want to stick to more traditional fare.