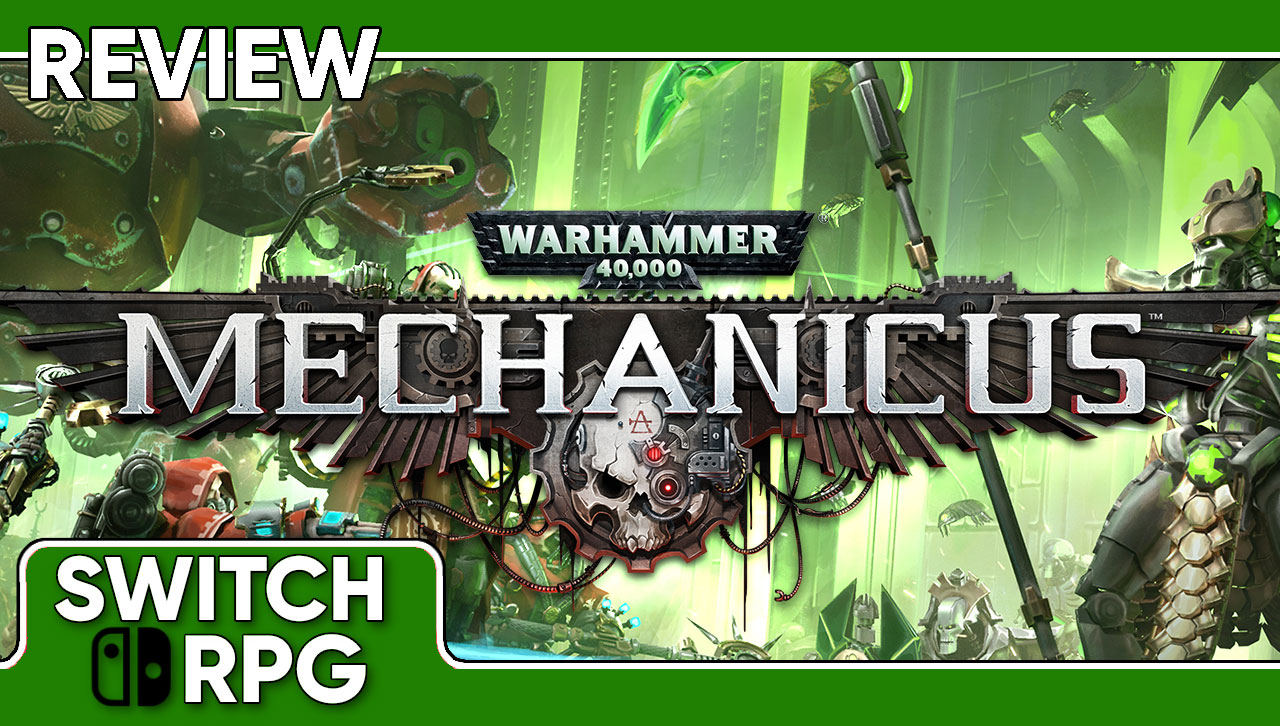 In terms of popularity, the tactics subgenre has seen a great deal of exposure on the Nintendo Switch, with titles like Fire Emblem: Three Houses, Wargroove, Mercenary Saga, and more. Loving homages to classic series have emerged like Fell Seal: Arbiter’s Mark, and more experimental, deck-building titles have appeared, such as Children of Zodiarc. But even titles like Tiny Metal and Broken Lines fail to go the distance in terms of bringing this gameplay style into the future. Fortunately, the folks at Bulwark Studios have gifted us a beautiful homage to the machine god in their appropriately inventive Warhammer 40k strategy title, Mechanicus. Does this game come together as a melodious metal massacre, and what distinguishes it from its contemporaries? Read on to find out.

Mechanicus is a strategy title with some roguelike elements, in that players will be able to find many routes to victory by selecting specific missions and scouring rooms and making “moral” decisions along the way, many of which can enhance the game’s relatively generous, yet omnipresent “awakening meter.” The Adeptus Mechanicus have unwittingly kick-started a Necron tomb, and while there are a number of missions that will allow you to knock some percentage off of the meter here and there, you should be mindful of the threat level you amass during missions, as the end number will immediately transfer over to your cumulative meter. Once that meter reaches one hundred percent, you’ll have awakened the entire tomb and unleashed the mechanical horrors of the Necron on the rest of the universe. 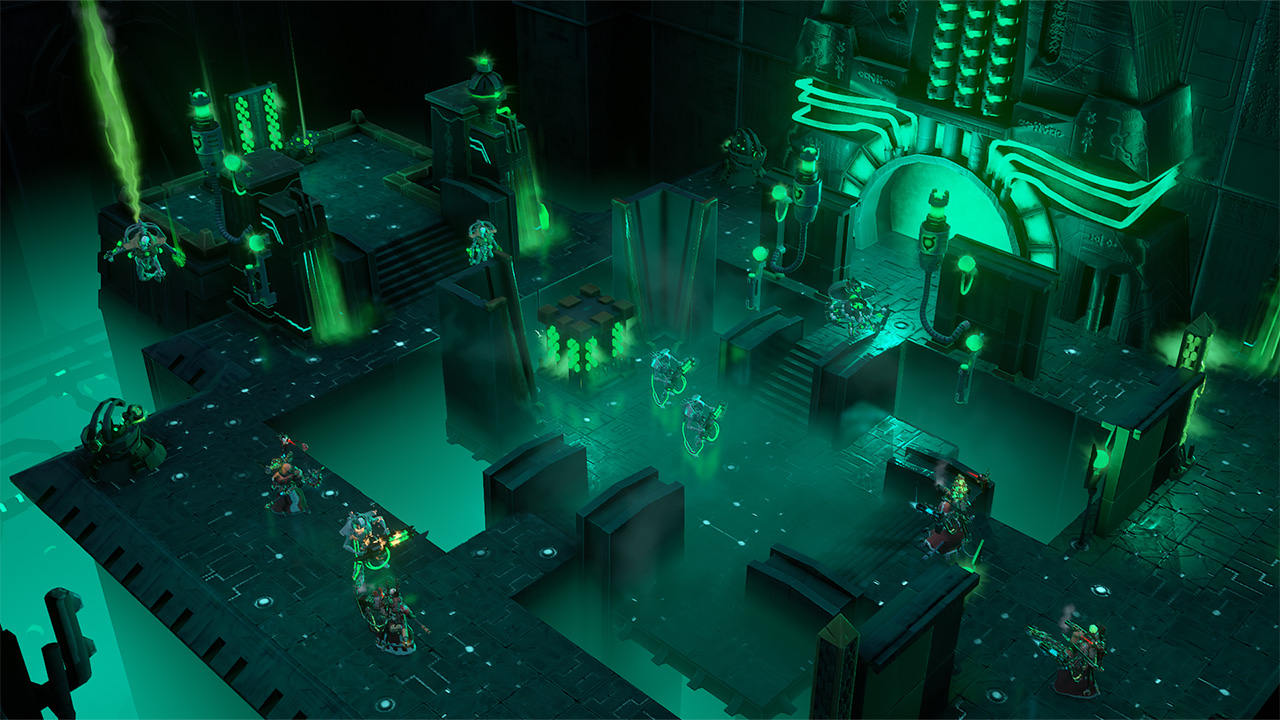 This is one factor to keep in mind, as the moral choices you’ll get to make in certain dungeon rooms can also have negative effects on the units you bring into play. There are two kinds of units in Mechanicus: the grunts, which are generic and usually feature a single defining combat trait. While it’s always good to keep this resource alive when possible, their lives- or rather deaths- are of little importance in comparison with the Tech Priests, the stars of the show and the more customizable units. Tech Priests use special kinds of weaponry and abilities in order to fight, and can be customized with an impressive multi-class system that allows for a great amount of variety, which largely revolves around the game’s unique resource management system.

In order for Tech Priests to gain access to their weaponry, they’ll need to use Tech Points- a resource that can be generated from smart moral choices during the exploration phase of each mission, but can also be accrued from specific interactions while in battle. Some devices grant Tech Points via proximity, while one can also generate the resource by having specific grunt units take damage, or felling and then examining Necron corpses. Tech Points power the weaponry of Tech Priests, but they also enable these special units to move further, meaning your Priests can make an impressive sprint across the map by hitting harvesting points along the way. Additionally, Tech Points are also the means of dropping grunt units into play, so you’ll need to end a turn in-battle with some in reserve if you want to summon lackeys to aid you in the fight. Once a Tech Priest dies, it is gone for good, so making sure you have access to their weapons and meat shields to divert damage is hugely important.

Missions usually consist of a small, randomized map of nodes with a set of moral choices distributed throughout, and the occasional one or two skirmishes as a test of skill. You’ll also generate the in-game currency blackstone as your journey through each mission and are even able to access caches during skirmishes, but you’ll also receive blackstone negations based on the damage and inefficiency of your units at the end of a mission- something that is never too extreme, but always worth considering. Your central hub will allow you the opportunity to select missions and customize the loadout of your Tech Priests, while also having the opportunity to check in on the impressive amount of loot the game offers.

Mechanicus may draw from the Warhammer 40k universe, but it is very forward with presenting you the details of its universe and the sort of scenario you’ve taken up at the beginning of your campaign. In many ways, the narrative of Mechanicus is relatively easy to pick up, and that’s thanks to the extremely quirky characters that comprise this Machine God Science Cult, themselves. Having received a distress signal from a mysterious, lifeless satellite, the Adeptus Mechanicus arrive and find a planet rife with reactivating Necron, some spooky robot skeletons with an appreciation for death. As scientists who pride their technology to the point of bodily integration, the cultists take the opportunity to both research and ravage as they attempt to assemble a solution to what is a monumentous discovery and cataclysmic development. 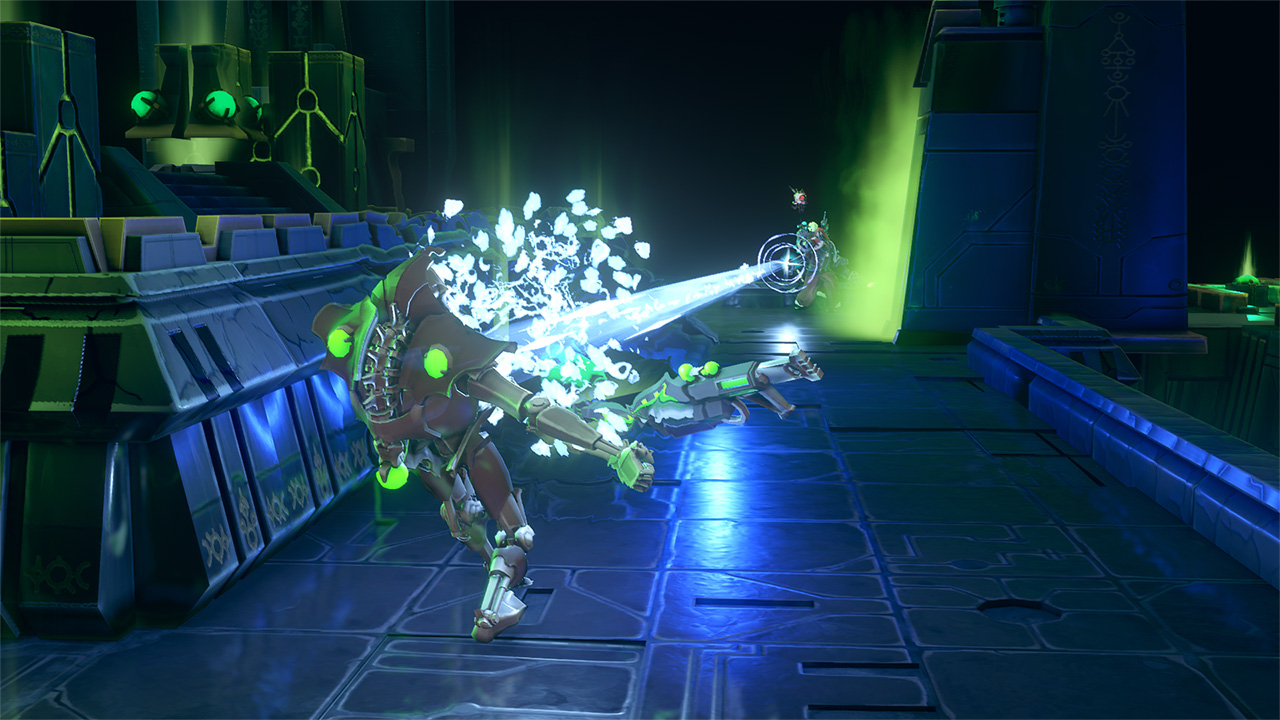 There’s equal parts scientific curiosity and religious zealotry peppered throughout the briefings of Mechanicus’s many missions, and the character archetypes who embody these principles are quirky and absurd, allowing the game to infuse its horrific scenario with some silly self-awareness. Your missions will revolve around catering to the whims of your comrades while relishing in their weird obsessions. There’s not many twists and turns to the narrative outside of this, as you’re presented a straightforward objective and multiple routes to solve the dilemma.

The game further benefits from its setting via some excellent sound design and aesthetics. Playing Mechanicus on a larger screen only benefits the visual feast on display, as your Tech Priests and their gear are rendered excellently and contrast the deep blues and pulsating greens of the Necron tombs. Though not a high-budget game, Bulwark Games has managed to faithfully recreate many Warhammer 40k designs and couple thier animations with excellent sound effects. This is enhanced by the choral electronica that plays throughout missions, briefings, and skirmishes, assaulting the ears with some truly distinct and powerful tunes. Unfortunately, this visual and audio splendor must be appreciated from afar and ad nauseum, as the zoom-in function places an aggressive depth of field filter over any units not within immediate view, obscuring most detail. Though Mechanicus looks and sounds great, there are not options for speeding up the game experience, either, which means you’ll need to watch each detailed, but somewhat plodding animation play out.

Mechanicus’s appropriately inventive Tech Point resource management system makes for tactical gameplay of the best kind. You’ll rarely be dealing with hit accuracy, as just about everything is guaranteed to hit, save for a buff you can bestow upon yourself in order to gamble your survivability. The ebb and flow of combat comes more from the Tech Points and abilities you have on reserve, and how efficiency you can use them to dominate the dangerously reanimated Necron. I have personally always prefered a more tangible and transparent resource system in relation to the idea of crafting all sorts of godly units, and the balance between valuable Tech Priests and throwaway grunt units is used very well in the skirmish structure. 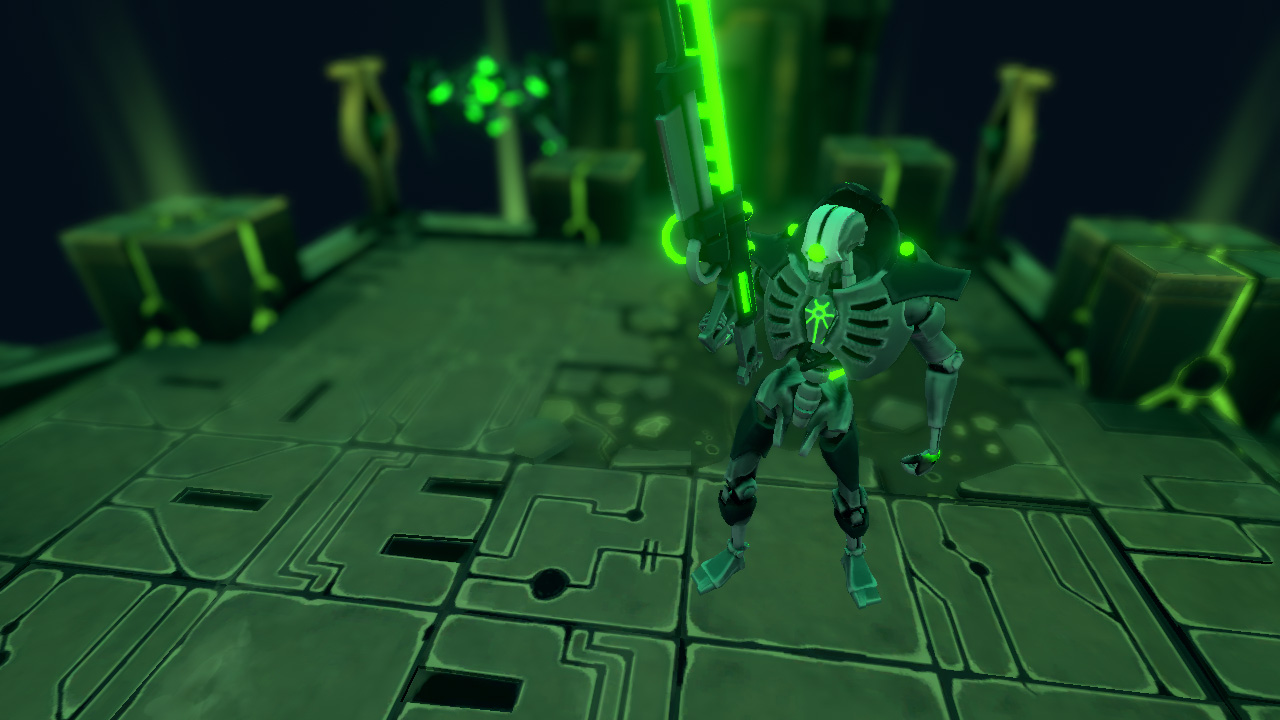 It would be remiss of me not to mentions Mechanicus’s extremely impressive difficulty options, which allow for players to enhance or decrease the difficulty of their playthrough based on their comfort level and preference to an unheard of degree. For a game like this to offer as well-balanced an straightforward a single player campaign as this, while also granting access to some extremely diverse options that extend to the specifics of its gameplay elements, Mechanicus is ready and willing to be enjoyed no matter the player. Unfortunately, it’s the game’s own extravagance that works against it, as the unskippable opening cinematic is indicative of the pace of gameplay in many ways. If you have the patience to sit through some familiar attack animations, you’ll find an incredibly impressive, oppressive, and enjoyable experience in Mechanicus. Just be mindful of what sort of experience you want to have before taking the plunge, and those accessibility options will always work in your favor.