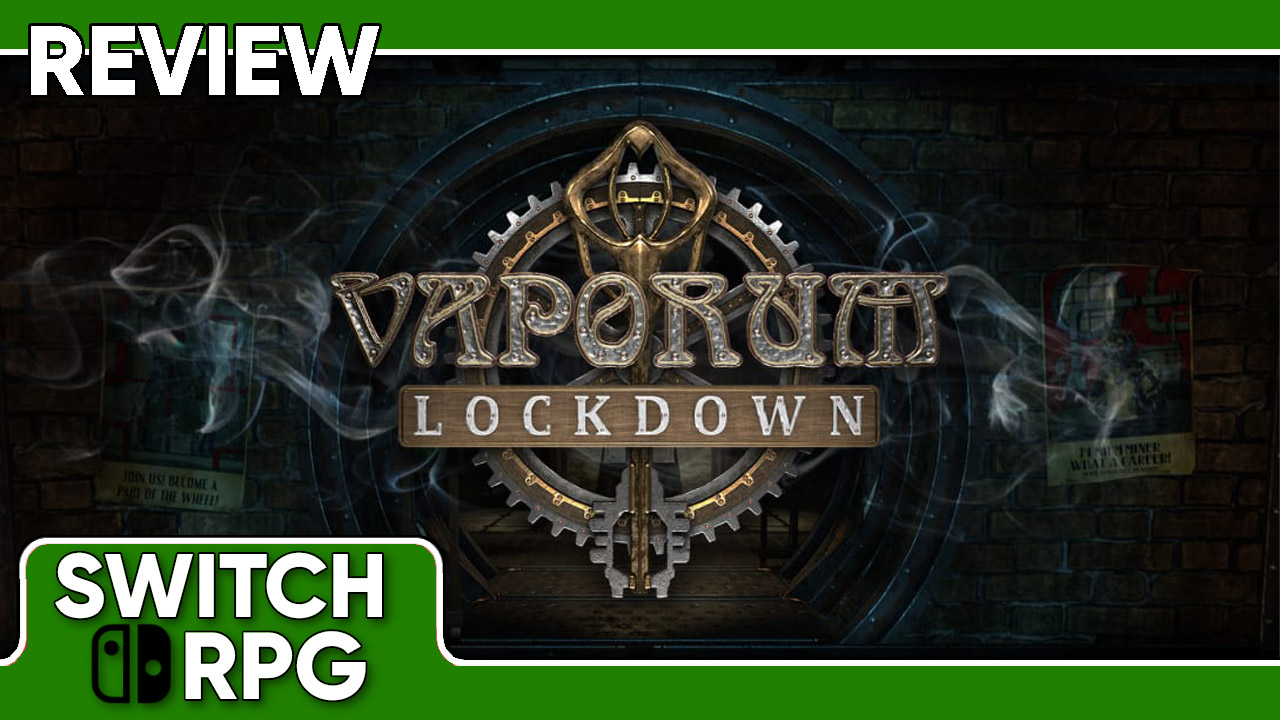 Bioshock is a series that has captivated me for well over a decade, so much so that I consider it a measuring stick for any FPS with RPG elements. My love for it, however, has obscured my vision when it comes to any retro-futuristic first-person game. I see one, and automatically assume it is in the same vein as my beloved series. Naturally, when the opportunity arose to cover Vaporum: Lockdown by Fatbot Games, I happily obliged. But imagine my surprise when I discovered it was actually a grid-based dungeon crawler RPG! Oops! Regardless, I was determined to dive into Vaporum: Lockdown and find out whether it was worth the time. Does it succeed? By and large it does, though it doesn’t really bring anything innovative to the genre other than a shiny – albeit unsettling – new coat of paint. 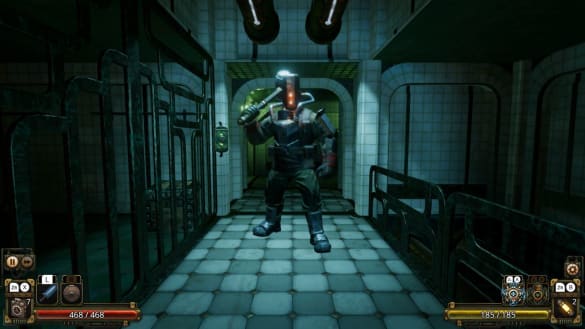 Vaporum: Lockdown is a prequel to the previous Vaporum title that weaves a fascinating tale of what exactly happened leading to the disaster at the Arx Vaporum Station. The titular station was once a busy hub of discovery in a world that is transitioning to operating on the mysterious substance – Fumium – that Arx Vaporum was created to mine and study. You play as protagonist Ellie as she is sent to the depths of the facility to investigate the origins of some untimely mishappenings for the crew of the Arx Vaporum. Her journey is an entertaining one, but I found myself being able to predict pretty much every scenario of development. As the story unfolds, it becomes quite clear that Fatbot are big fans of the Doom and Bioshock franchises. This isn’t necessarily a bad thing – it just lays a troubling foundation for my overall take on Vaporum: Lockdown: a desire for some level of innovation.

Vaporum: Lockdown features some entertaining cutscenes that slowly reveal the inconvenient truth that the crew of the Arx Vaporum are likely responsible for their current predicament. The game is rich with lore that expounds upon the purpose of the underwater tower in the middle of the ocean. Unfortunately, most of the more alluring story bits are discovered by reading through memos lying around the station. While the contents of the notes can be interesting, I found them at times to feel like cheap short cuts and/or explanations for certain aspects of the game that can leave the player scratching their head. It may seem like I’m nitpicking here, but the truth is the story is entertaining. The written memos may leave the player wanting more, sure, but it’s important to remember that indie studios like Fatbot have to do what they can with the resources they have. 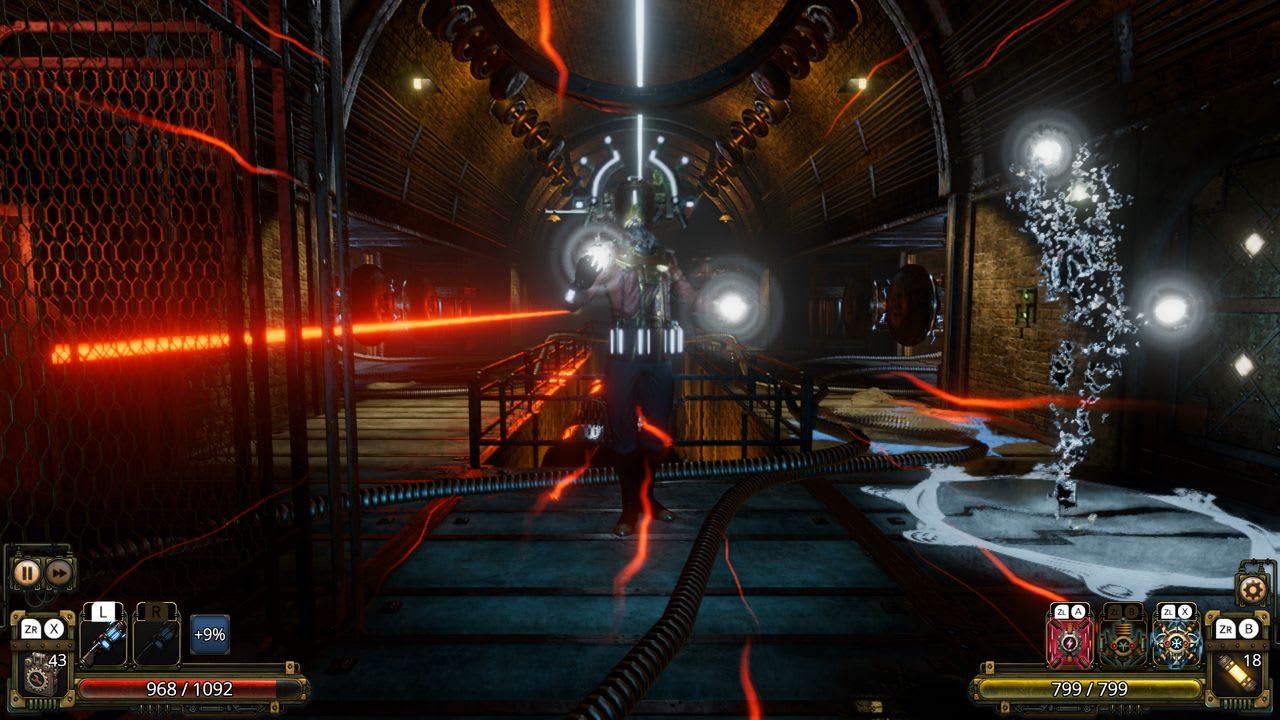 At its core, Vaporum: Lockdown is a first-person, grid-based, puzzle-solving dungeon crawler. The added sci-fi and steampunk elements do help breathe some new life into some of the genre’s antiquated designs, but every other aspect of gameplay takes a bit of re-adjusting in order to become comfortable. Basic movement, for example, is an instant surprise if you’re not familiar with grid-based movement in a 3D setting. There were multiple occasions of which I could clearly see a hole in the floor a few steps in front of Ellie. My brain told me that there was plenty of room to stop Ellie before reaching the hole, but the controls revealed otherwise. Grid-based movement does NOT afford the player the opportunity to simply stop at will, so each step has to be carefully considered in rooms with dangerous obstacles.

While the movement had its share of growing pains, it’s downright surprising how well the controls at large integrate into the game’s various puzzles. Ellie’s movements are a key aspect to many of the game’s puzzles, and it is at these times that the controls add a lot to the fun factor of Vaporum: Lockdown. The love/hate relationship with the controls leaned more towards the “hate” side, however, when there was no puzzle involved and my only goal was simply to move Ellie.

It feels clunky and unnatural considering the fact that the game forces the player to use the analog stick for movement. This is confounding considering the game allows for use of the D pad when managing and navigating the inventory screen. This is a grid-based game and the D pad functionality is already there – so it would only be logical to make it functional (or at least optional) for movement, right?

Combat is where Vaporum: Lockdown shines the brightest. Ellie dons a customizable exo-suit that allows the player to tailor their combat experience in true RPG fashion. While there is only one exo-suit in the beginning, progressing a bit reveals additional suits that will serve as the foundation for your preferred style of play. While not a revolutionary addition to RPGs, it does create a layer of replayability for Vaporum: Lockdown when you consider the potential for multiple builds. 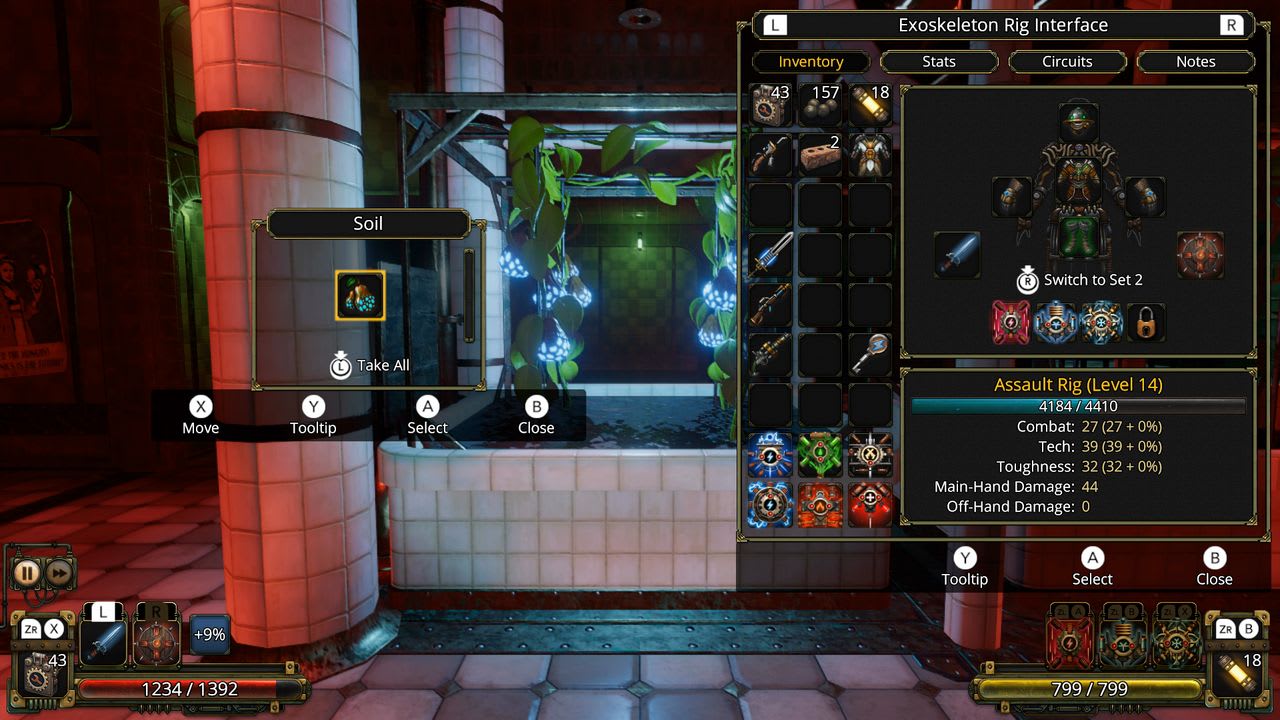 Customization comes in the form of “nodes,” which can alter the performance of the suit or add a different functionality to it all together. For example, one or both nodes can have a melee weapon equipped to increase offense. You may choose to take a more balanced approach and choose a melee weapon along with the added defense of a shield. If that sounds a bit too generic, you can always equip Ellie with a gun for ranged combat and then add exploding mines to be placed directly in the enemy’s path.

While there are plenty of options to tailor the combat to your preference, there is simply no escaping the pacing. Timing becomes critical due to every single action having a delay and a cool down phase. The design of this combat system is unique in the sense that it forces the player to consider timing for offense and dodging – kind of like a mini-game within a game. It simply works in terms of execution.

Fatbot had quite the task ahead when faced with creating a creepy, underwater dungeon on an indie budget – a task that the team met head on and nailed (for the most part). The Arx Vaporum looks like a dungeon straight out of the hellscape from the Doom franchise…and that’s BEFORE you even meet the mutated rats and rampant robots. Furthermore, Arx Vaporum is littered with fire pits, booby traps, and bottomless voids for any unsuspecting lab worker to die in; I personally hope the workers were receiving hazard pay before the meltdown event, especially considering that they too seemingly had to solve weight puzzles just to head into the next room and do their jobs. These head scratchers don’t impact the game negatively, but some puzzles just felt forced into the environment. However, they all suit the creepy and dangerous atmosphere perfectly. 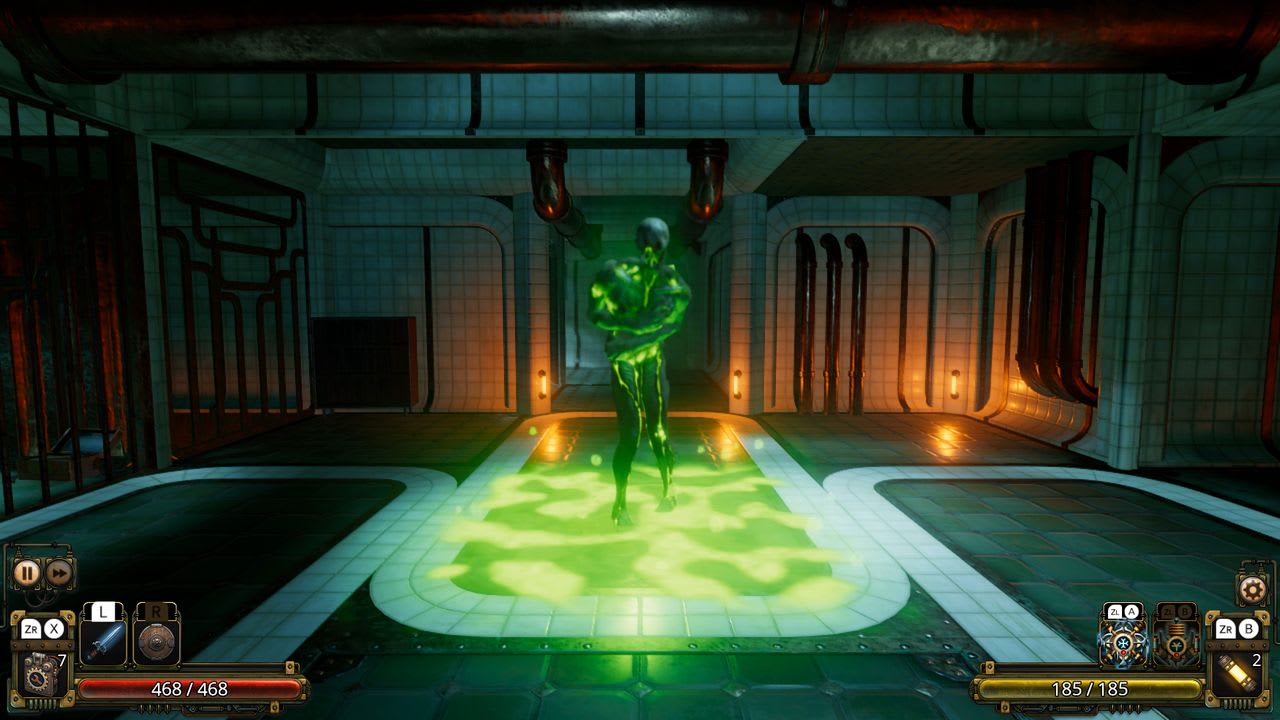 Lighting and shadows also play a big role in the overall vibe of Vaporum: Lockdown. Some rooms Ellie enters will be dark and maybe feature an ominous wire sparking in the distance. Another may have dim, iridescent lighting permeated by poisonous haze. The game comes up with many creative aesthetics that are sure to give the player the heebie jeebies.

Vaporum: Lockdown doesn’t feature music at all. This wasn’t a bad decision because it does help drive home the eerie atmosphere, though some areas just seem bland and probably could’ve used a little ambiance in my opinion. Vaporum: Lockdown also features respectable voice acting – another impressive feat for an indie studio. Ellie and her co-worker on the other end of the radio particularly nail home the “tough love” attitude through their dialogue.

Vaporum: Lockdown was a unique experience for me. Grid-based dungeon crawlers are few and far between these days, and I’ve played few of the modern ones that do exist. That said, I do believe Fatbot executed the goal of crafting the game and story they wanted to create rather well. Vaporum: Lockdown is a dungeon crawler peppered with brain teasers. Movement and exploration can be odd and downright uncomfortable at times, but combat actually benefits from the start and stop mechanics…at least for a while. However, it is inexcusable for a game of this variety to not include D-pad movement functionality as it alone would have vastly improved the overall experience.

All things considered, Vaporum: Lockdown should satisfy those looking for a first-person dungeon crawler with a unique aesthetic – but only if you can get past its shortcomings.