If there’s one odd subset of games with which I’ve become increasingly fascinated, it is those created by Korean developers. Having known little of the work coming from this part of Asia, or at least, never really felt the impact of their presence, it has been a delight to review a number of titles originating from South Korea for SwitchRPG. Though I haven’t always granted games like Animus: Stand Alone or Blade 2: The Return of Evil perfect scores, I have found some consistently enjoyable aspects in these titles, specifically in regards to their artistic aesthetics. For better or worse, Vambrace: Cold Soul is no different.

Lore is one of the key pillars of the Role-Playing genre, with unique worlds and compelling characters often acting as the greatest incentive for braving the harsh, untamed wilds that a game world offers. In the case of Vambrace: Cold Soul, a narrative-heavy rogue-lite exploration title, the lore and the gameplay sit on such distant ends of the spectrum, it seems odd to state that they exist in the same title. It pains me to say this, as the game features some of the most gorgeous and lush artistic elements I’ve seen in a title of its size and price point, though it comes at a cost. The cost is, unfortunately, the actual gameplay, which does attempt to diversify itself from other games in many ways, yet fails at offering something substantial due to this desire. If you enjoy the nature of a brutal, first-person dungeon crawl, but don’t want to be bothered by that pesky thing called “character progression,” you may find what you’re looking for in Vambrace: Cold Soul.

Vambrace follows the journey of its protagonist, Evelia Lyric, as she explores the city of Icenaire in order to discover the secret behind her titular Vambrace. Even as someone familiar with a fair number of Role-Playing sub-genres, a succinct description of Vambrace’s structure eludes me. Despite this, I’ll attempt to do my best by offering up some potential substitutions and a description of my own. I have heard some equate Vambrace to Darkest Dungeon, although the comparison does nothing but evoke mixed feelings in me (partly due to the particularly punishing “payoff” that exists in the completion of that title). Still, the notion that the two are similar does ring true: upon starting out in Icenaire, the player may stock up or sell off items, as well as managing their party composition, before heading to the game’s proverbial “glass elevator,” which will send them off to one of the many districts of the frozen city. From there, they will need to progress through a series of randomly-generated maps that offer a specific number of set engagements. These range from chance, merchant, loot, and battle encounters, each with their own potential benefits or setbacks. Whether or not you’ll survive these rogue-like, dungeon-crawling segments depends on a variety of stats: combat, sleight, awareness, overwatch, and merchantry. Each of these contributes to the success rate of certain outcomes, though some do bleed over into multiple systems. For example, awareness contributes to turn order in combat and the chance of spotting traps throughout dungeons. For the most part, the objective is simple: get to the end of the dungeon and face down the boss in order to advance the narrative. 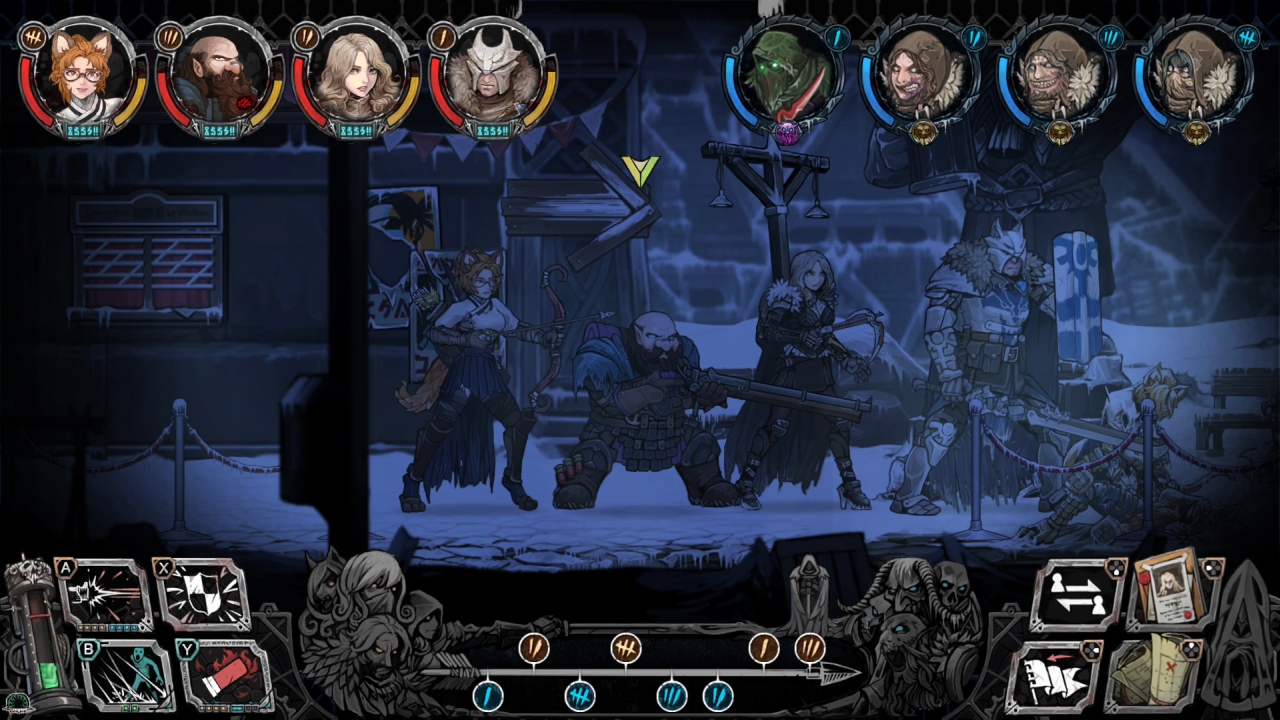 Combat is turn-based, with characters possessing a number of attack options, some of which utilize a magic point mechanic that can be recharged via dealing damage and blocking incoming attacks. Though combat and abilities are fairly straightforward, the chance of missing attacks is, on the whole, depressingly high, which means having a good grasp on its systems doesn’t necessarily guarantee things will be a cakewalk. Adding to the oppressive nature of the game is the vigor stat, a set number that slowly decreases by one point with the transition from one room to the next. If any of your party members’ vigor meter falls to zero (outside of the protagonist Lyric), they’ll succumb to the chill of Icenaire and die- permanently. In addition, any of their equipped relics- precious equipment that offers buffs to the bearer’s stats- will be lost, meaning you’ll need to grind for replacements.

The reason the loss of relics and the survival of the party is so crucial is simply due to the nature of character progression- namely, the lack of it. Characters will receive harsh debuffs from combat or traps while in the field, but they can never become stronger than the boons gifted by their single equipped relic. Only Lyric herself will benefit from narrative-based stat boosts, so keeping characters alive- despite their lack of unique traits outside of portraits and names- is key to keeping currency and inventory size strong. The party can rest at various camp areas found in dungeons, where a party member with a high overwatch stat can restore health and vigor and the party gains access to some of their healing items, but this also comes at the risk of increased terror, a resource measured in the game’s geistometer, which causes endless enemy encounters- and higher risk of death- once maxed out. Luckily, the player can abandon their expedition of the city districts at any time and return to the city hub, losing progress, but keeping any spoils they might have found. This results in a perpetual cycle of material grinding and currency building that helps keep Lyric’s party alive.

If all of these stats and concepts seem dizzying or unfamiliar, then you’re getting the right impression. From the start, Lyric is a newcomer to Icenaire, having received the titular Vambrace from her now-deceased father, who claimed its use and the answer to many of her questions lay in the frozen city. Because of this, you are tossed into an alien world with a different set of rules in the same way as she, though her Vambrace proves to be essential and pivotal to the surviving denizens of Icenaire, and remains vital to the narrative throughout. There’s a great deal of backstory to be found in Icenaire, and a number of interactive spots will add pages of lore to Lyric’s codex, which expounds upon the myths, ecology, and politics of the city. In addition, there are a number of memorable characters to be found throughout, hailing from a number of species- the sly foxier, hardy dwarves, hollow golems, and sinister-though-not-completely-soulless wraiths. One of the greatest delights in Vambrace comes from exploring the dialogue and experiencing the gorgeous hand-drawn art of these characters. 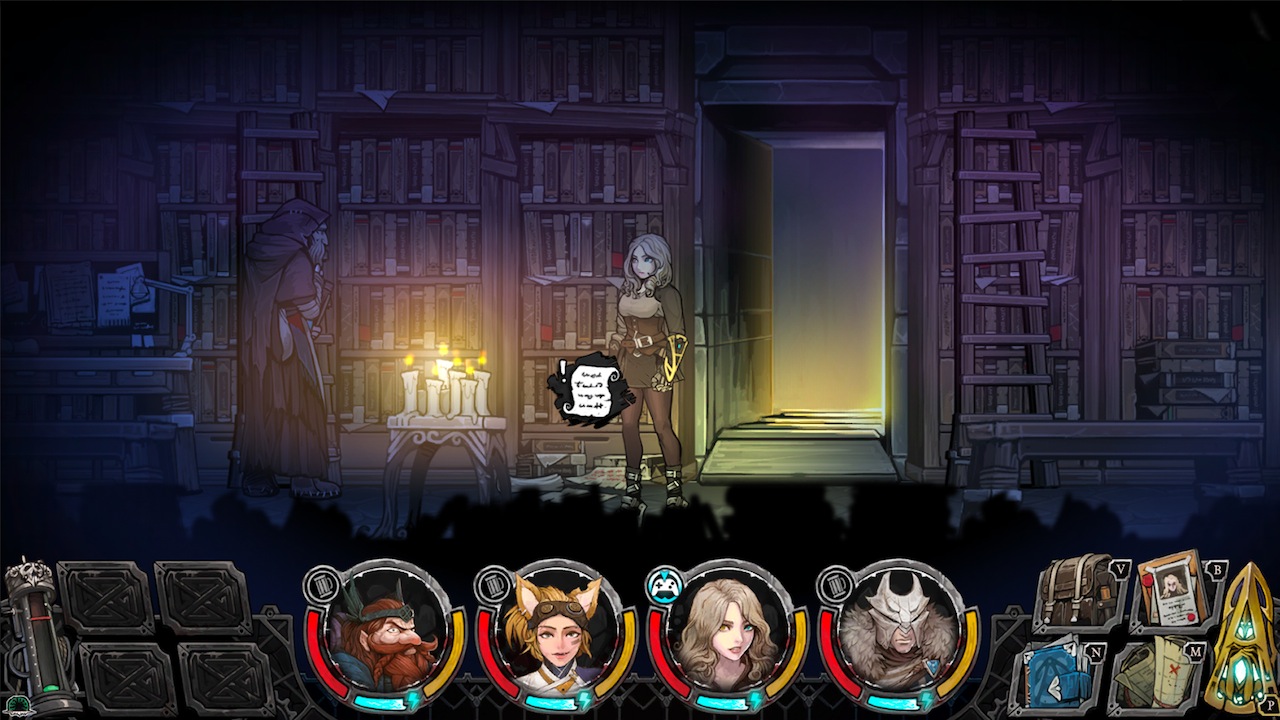 Though Vambrace’s action plays out almost completely on a 2D plane with simplified versions of its characters, dialogue sequences reveal detailed character portraits of important characters and party members, some of which visibly react to dialogue options. These drawings are stunning, with a number of full-figured male and female characters. Despite the game’s nature to lean on the side of fanservice, many characters don armor and equipment that suits the frozen wasteland, while others possess outfits that play into their species’ heritage. If there is a singly reason to look into Vambrace, it is the extensive number of gorgeous character portraits. Similarly compelling is the environmental design, at least, in the central hub, where a variety of different locations feature unique and immersive backdrops. The same cannot be said for the repetitive designs found out in the frozen districts, which feels odd, considering you spend more time in these environments from a proportional standpoint. The music also does an excellent job of translating both warmth and frigid desolation in the areas necessary, with various degrees (pun intended) of emotion and gravitas in other areas… in the town, of course.

This is where my thoughts- and the nature of Vambrace itself- start to converge. Seeing as the majority of the game takes place dungeon crawling, one would hope that a bit more variety would be randomly generated in these areas. The final phase of each exploration phase, which leads to the boss encounter, often features an environmental puzzle and a shift in design philosophy, but for the most part, you’ll be seeing a great deal of the same environments over and over. Not only that, but despite the gimmick-cycling of enemies in certain exploration segments, the tactics and team composition rarely require all that much alteration. If you play brutally safe and at a pace that allows for the proper grind of materials and relics, you’ll manage to keep your team intact, even if your patience runs a bit thin. 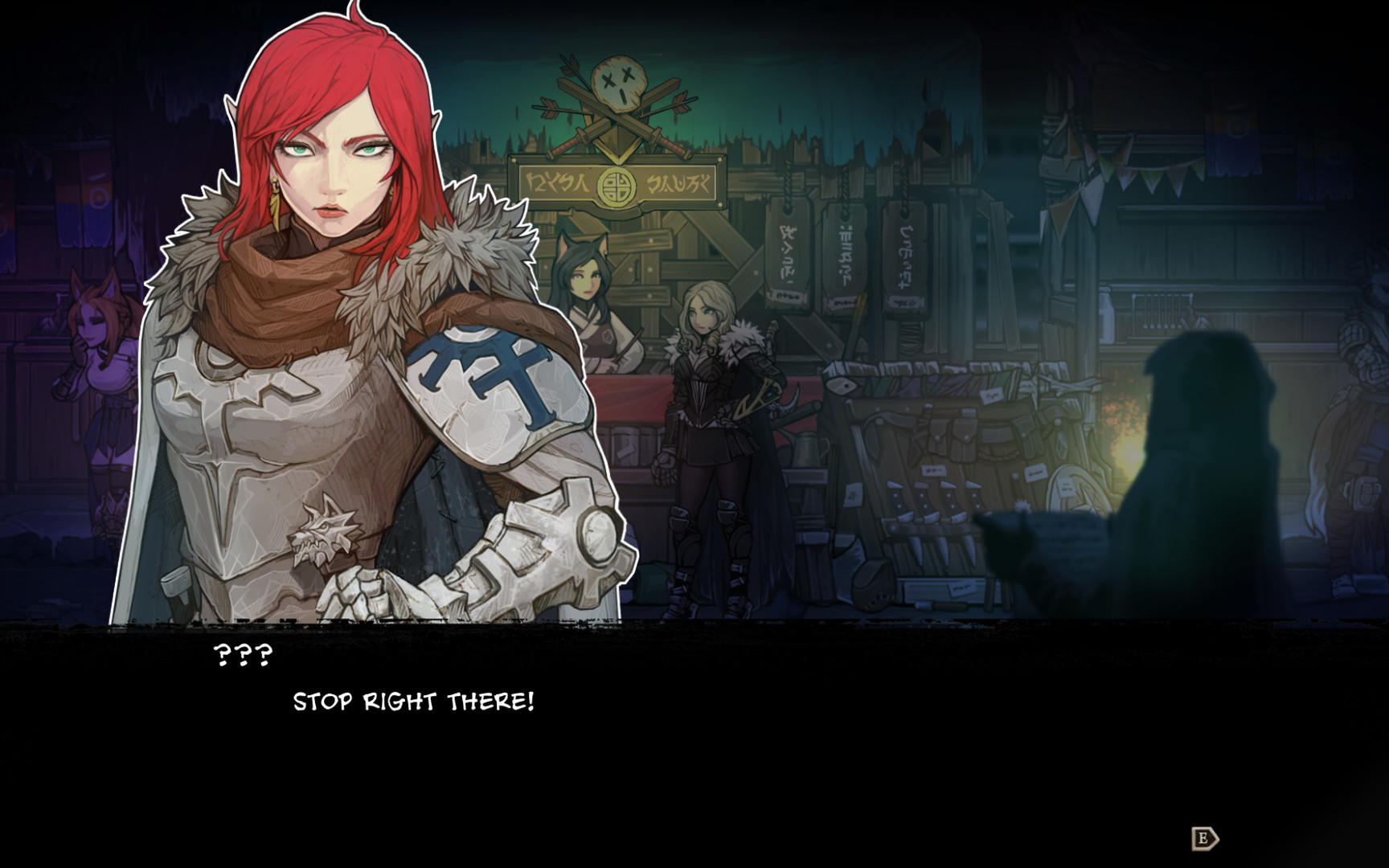 What remains more confusing, however, is that the side quests that allow you to unlock alternate costumes and some other prizes for Lyric and her party are almost entirely based around the hub world, involving a great deal of interaction and engagement with the colorful cast of NPCs. This isn’t necessarily a bad thing, because these characters are a joy to look at, and the revelation of more lore and storytelling is arguably the game’s greatest strength. But that there’s almost no transference between the hub world and the desolate districts of the city- life and politics and intrigue occur within, where the characters with names and faces play, while Lyric and her figuratively faceless recruits brave the chilling wilderness in harsh, but ultimately formulaic, groups of houses and streets. The lack of meaningful character progression hurts the feeling of enjoyment in the long term, as the developers hope the death of party members and the introduction of fresh new faces will be enough to keep the player engaged- except that the party member classes aren’t varied enough to feel unexpected or offer any new folds.

But that’s not to say that the journey itself isn’t enjoyable, because it is. Yes, playing this dungeon crawler incredibly safe in order to keep your party kicking is one way to play, but it isn’t the only way. Likewise, there are a number of important dialogue choices and moments that will contribute to your ending, as there are three possible scenarios. Playing through Vambrace three times might not seem like an appealing process, but I guarantee that, if you’re a fan of any of the screenshots on display here, or are curious enough to learn about a new RPG world and navigate some new mechanics, you’ll have more than enough fun with Vambrace: Cold Soul. Though the elements that make it unique also feel like some of its greatest flaws, the storytelling and aesthetic are well-worth a cautious recommendation- just don’t let its overwhelming brutality and daunting desolation give you cold feet.