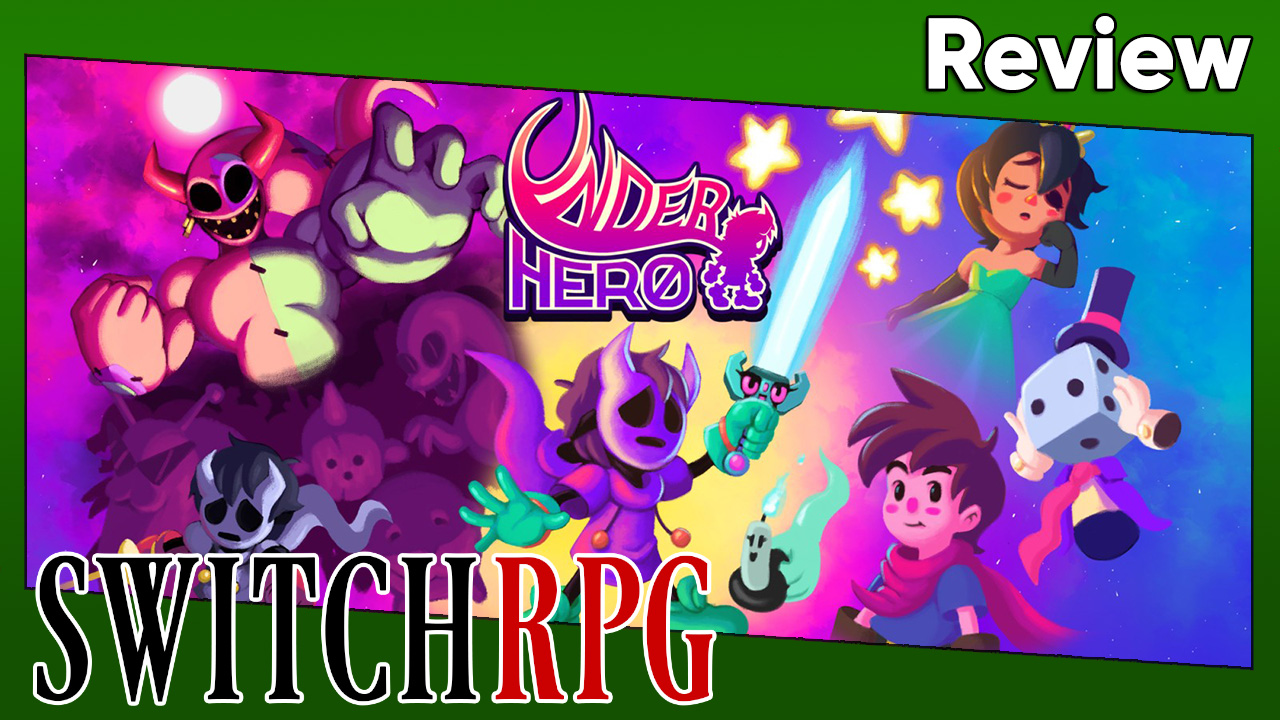 UnderHero was developed by Paper Castle Games, ported to Switch by Stage Clear Studios, and published Digerati Distribution. The only thing I knew about UnderHero prior to my playthrough that it was a colorfully artistic metroidvania. If it isn’t apparent from my content, I am a big fan of the metroidvania genre and the Switch is home to some of the best. Let’s see if UnderHero can un-stitch itself from the pack and climb up to be a standout game in the genre. 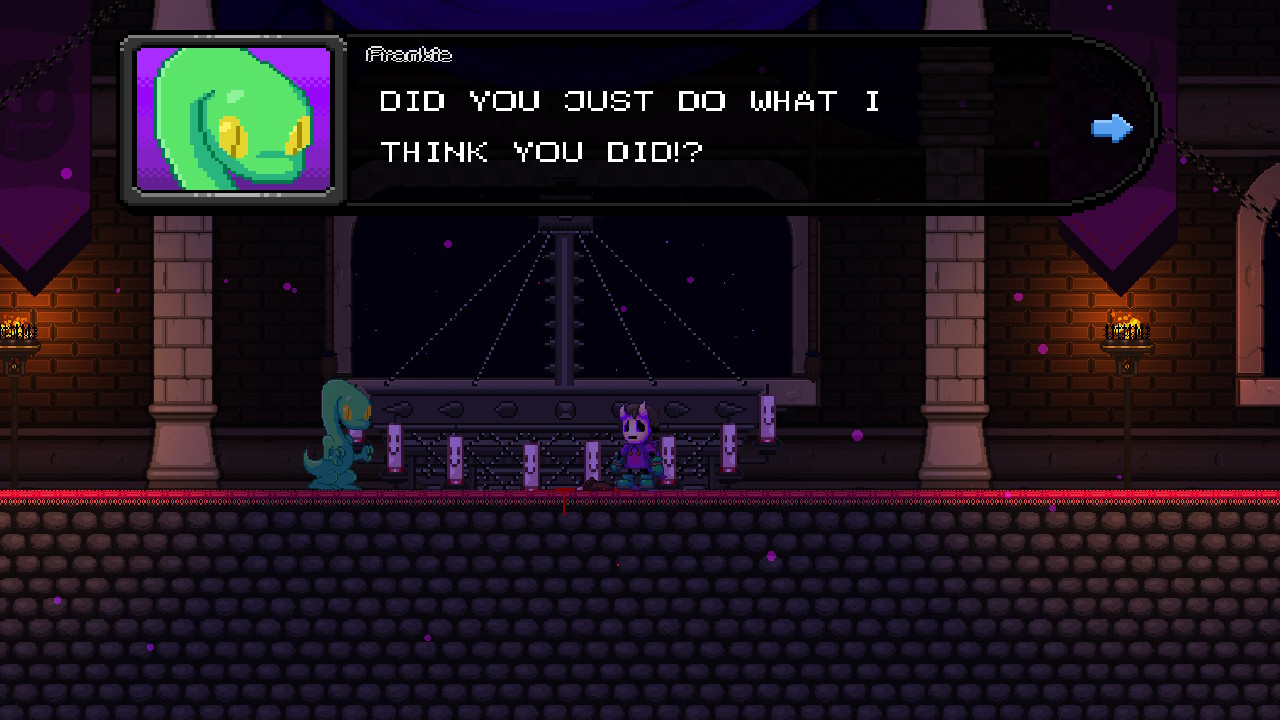 The game opens with you in control of a completely leveled hero at the end of his journey, but in the opening minutes, he succumbs to wounds from a chandelier, which fell upon him via the hands of a simple minion. You then take the role of a minion, a self-named masked kid and underling of the main villain, Lord Stitches. Mr. Stitches gives a very important quest to return three stones (presumably gathered by the now-deceased hero) back to their owners. Each owner is located in one of the worlds located around Chestnut Kingdom. Upon completing this quest, Mr. Stitches promises to reward you handsomely. And so you set out to return the first stone to the Moth Queen, who resides in the large tree in moth forest. 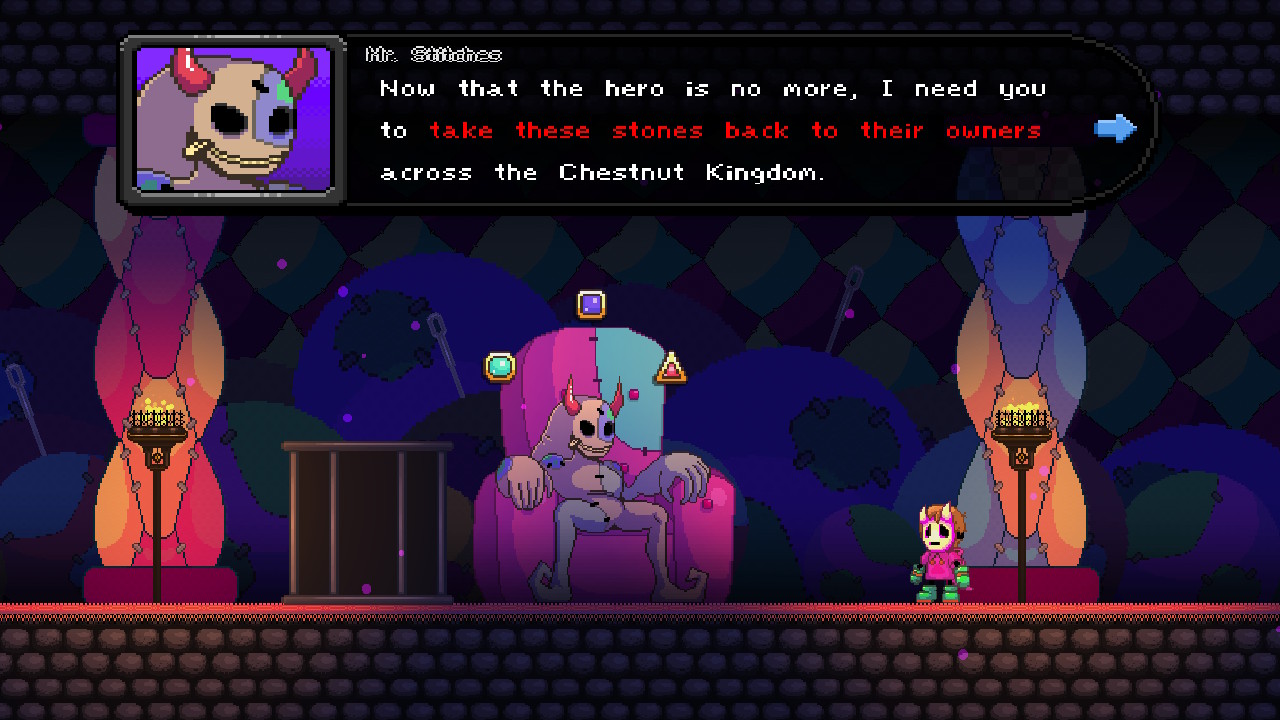 Your adventure begins in Stitches’ castle, which acts as the game’s central hub area. Here you will find a series of apartments you can explore to find secrets and collectibles, the hero’s path, a cafeteria, theater, and the shop and portals area. The shops and portals area gives you access to the 3 main worlds of the game, where you must traverse through various environments to return the stones to their owners. During your adventure you will form a bond with Elizabeth IV, a sword that belonged to our deceased hero. Along your journey she will provide tips & tutorials, often giving directions on where to go and filling in a bunch of the dialog that fleshes out the back story to your epic quest.

UnderHero shines when it comes to the combat system, which is heavily inspired by the Paper Mario series. During combat, you have several options: prior to making any attack you have the opportunity to talk to an enemy, this isn’t required in all instances, but some story=related sequences require you to obtain information, such as passwords, making it a necessity. You can sometimes talk to downed enemies after combat has been completed, as well. You also have the option to avoid fighting and pay the enemy using the coins you collected, again not required in all instances. Both of these options are mapped to specific inputs, though the latter requires several presses in order to fill up a payment gauge. The fighting uses a stamina-based system, which has a meter that fills slowly over time. Each attack option- hammer, slingshot and your sword- requires stamina to execute and have their own distinct pros and cons. For example, the sling shot is a ranged weapon and can hit flying enemies. You will need to watch and listen to the enemies for their attack “tells,” which can be avoided by using a jump, duck, or block option. If you time your block input properly, some attacks can be parried with your shield. The ability to parry is crucial and makes combat encounters much easier, as it doesn’t use stamina and deals extra damage. 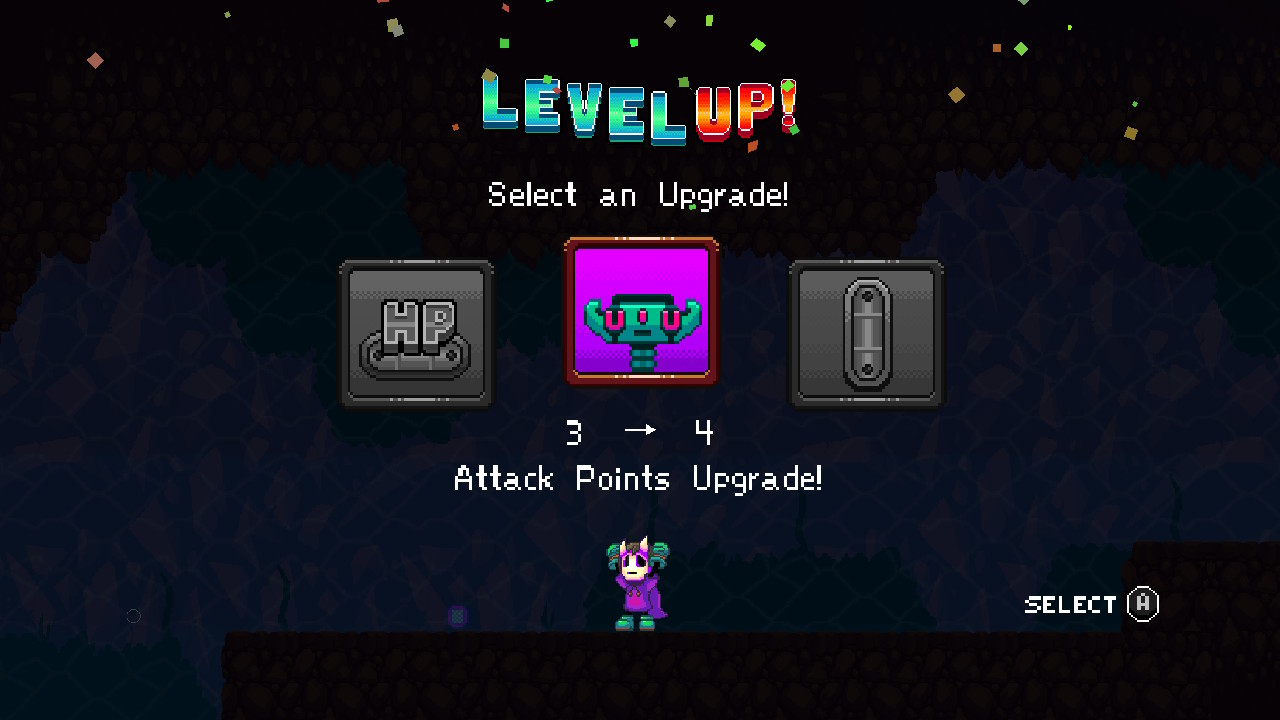 If you should quickly input attacks, you’ll drain your stamina; if you should run out, you’ll become exhausted and lose your ability to jump or dodge. The stamina meter fills over time, but you can also get a boost to the refill by timing an evasion perfectly. In addition to all of these mechanics, there is a rush meter that fills over time as well, and when triggered by holding L and R, your enemies become frozen and you can unload attacks on them quickly, getting a bonus if you keep the beat. While this may seem like a great deal of mechanical depth for a game where combat is active, it’s a great deal of fun in execution. 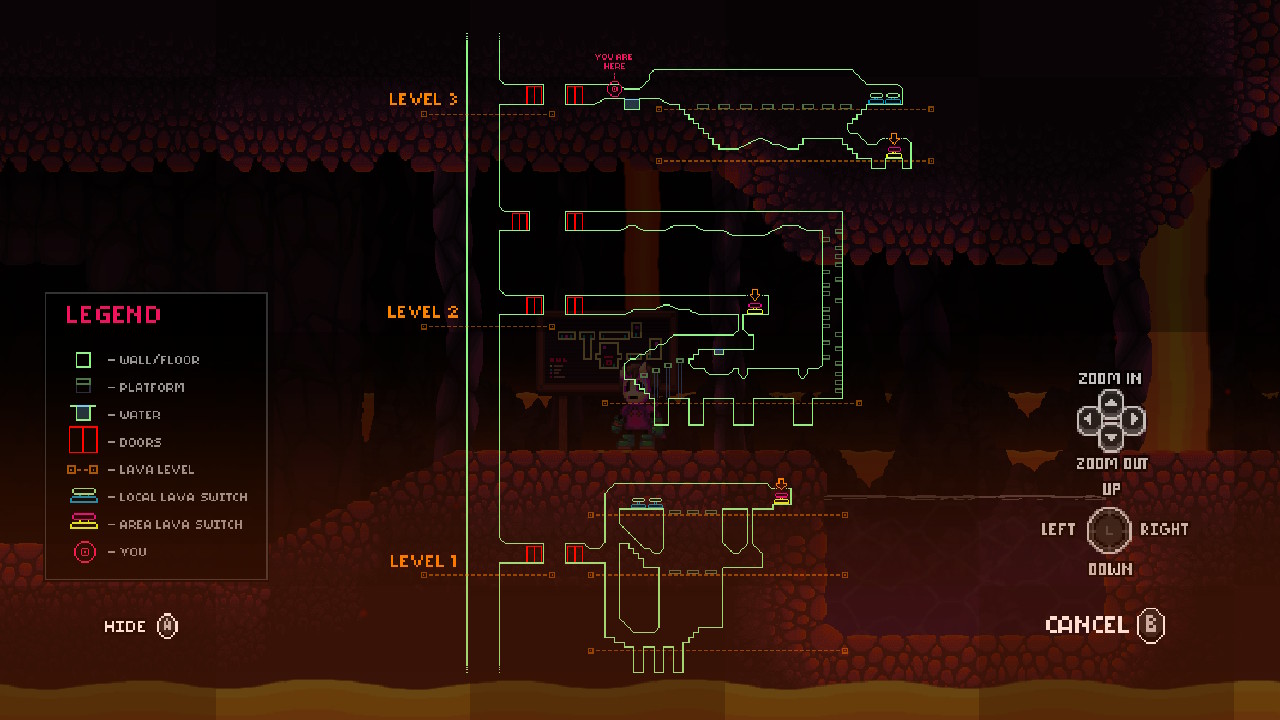 After each battle, you will gain some XP and will eventually accrue enough to level up. Leveling up allows you to select one of three traits to be upgraded: attack, health, or stamina. You can also find boost to each of these at the shop and via chests hidden throughout the world. In addition to combat, exploration plays an important role. You will be exploring the Chestnut kingdom, solving puzzles and taking down enemies on you quest to return the stones. As you explore, you will also run into several mini-games, such as a trivia game show and an ice skating competition, which is a guitar hero-type mini-game. There are also several NPCs you will meet, whom will ask you to complete some fetch quests. 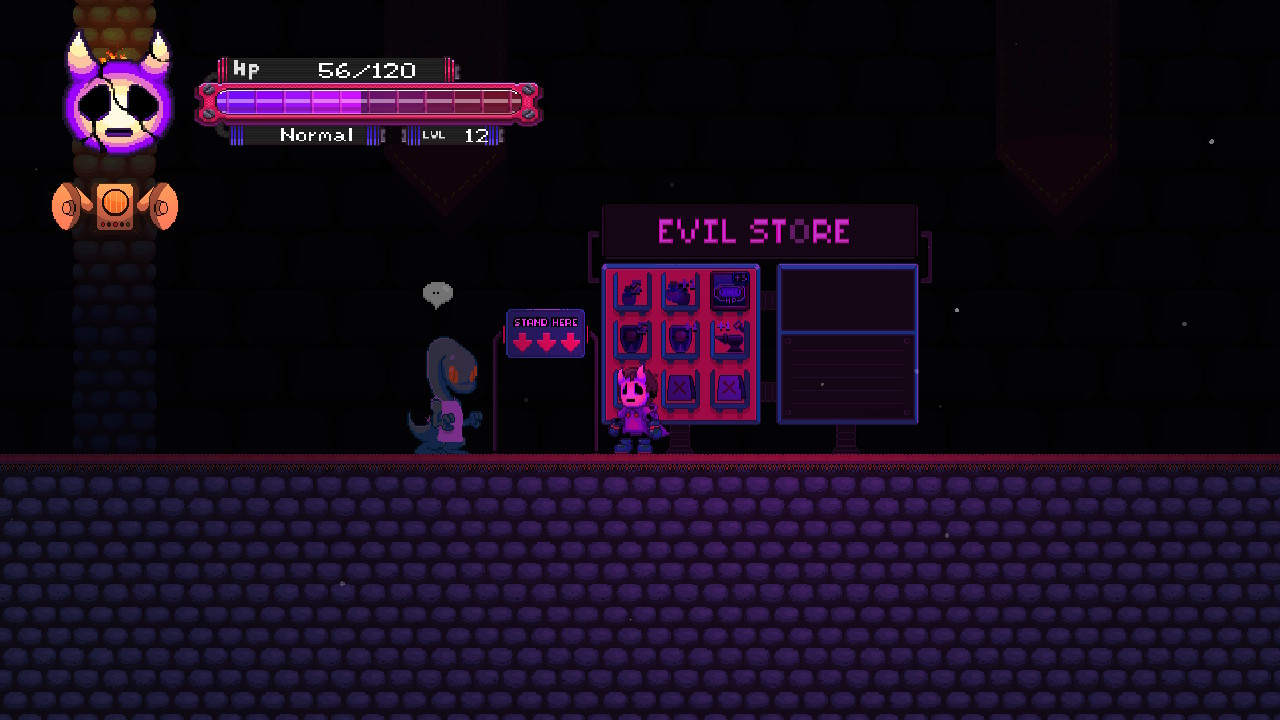 You will find chests that contain upgrades to both your character and your weapons though in addition to finding these upgrades, they can also be purchased at the evil item shop alongside potions and antidotes. Potions and other various items can be purchased at vendors found thought each of the worlds, but the upgrades can only be purchased at the evil shop located in the hub area. You’ll need to be mindful of how much you spend on upgrades, consumables, or paying of enemy encounters, as you might lose the ability to save. That’s right- you need to pay a small, one-time fee at each save location before you can use it. There is a great deal to explore and uncover in the Chestnut Kingdom, such has apartment keys and hidden cassette tapes, and information on all of this and more can be found in your inventory and Journal (quest log). 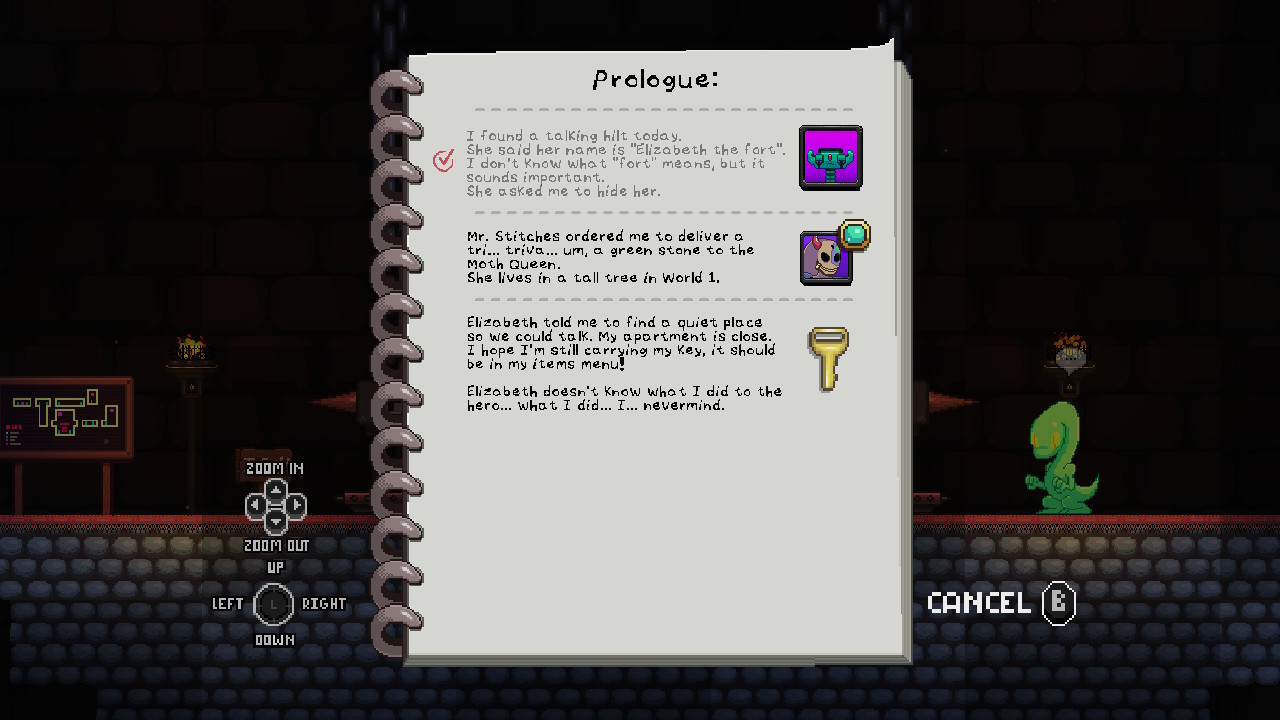 As mentioned previously, UnderHero is a 2D side-scrolling RPG that utilizes a vibrant and colorful artistic palette. Each of the worlds, from the snowy manor to the fiery volcano, has a collection of aesthetics and elements to make them feel unique and different from one another. The sound track is well done and knows when to kick up the beat in the right moments to keep pace with the action going taking place on screen. 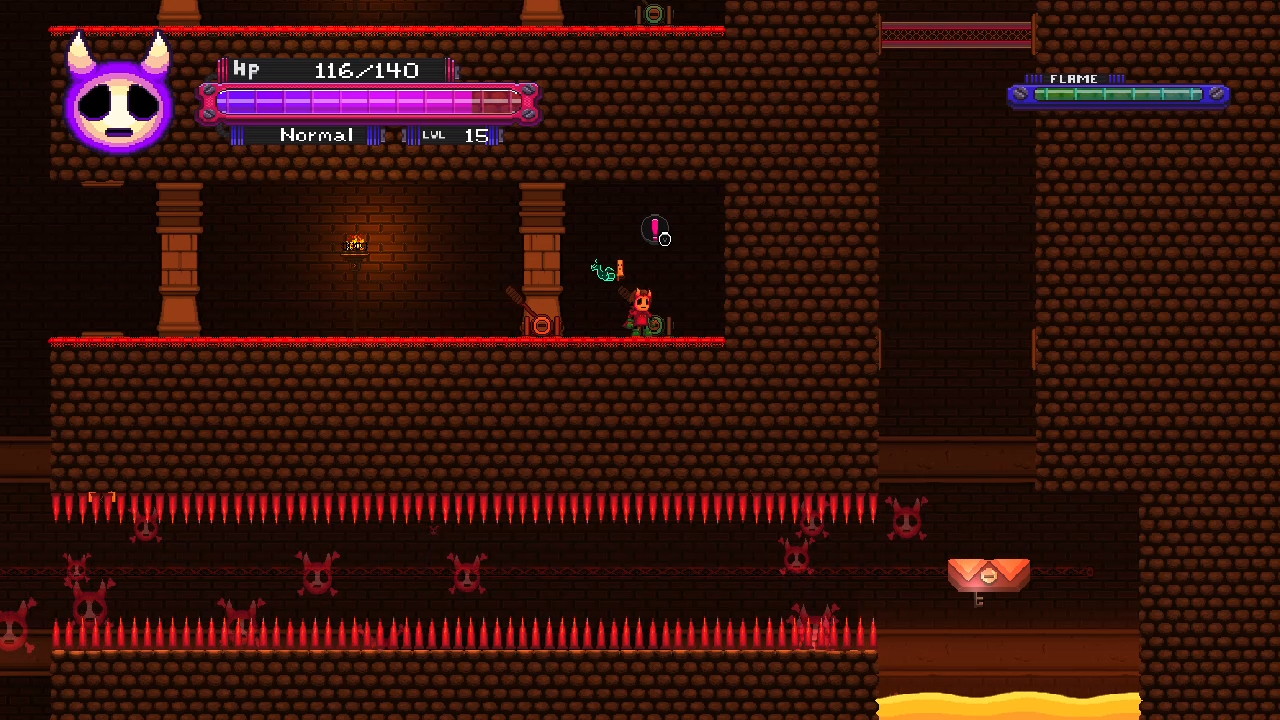 I did run into two minor hiccups along the journey, neither game breaking, but frustration-inducing. The first issue occurred when I walked into a room and an enemy was off its platform. While I was able to engage in combat with him, I wasn’t able to do any damage and was forced to load my last save. The second issue took place after the point where I felt the game had overstayed its welcome a bit, drawing more ire. This problem emerged while tracking down some keys, one of which could be acquired from a platforming puzzle. When I got the key to part where it should have fallen and landed on the platform, it didn’t detect the platform below and fell into the lava. Respawning the key didn’t solve the issue, instead needing a reloaded save and a repeat of the puzzle. Neither were game breaking, but I wanted to point them out to both readers and the developers, who are already working on a patch. 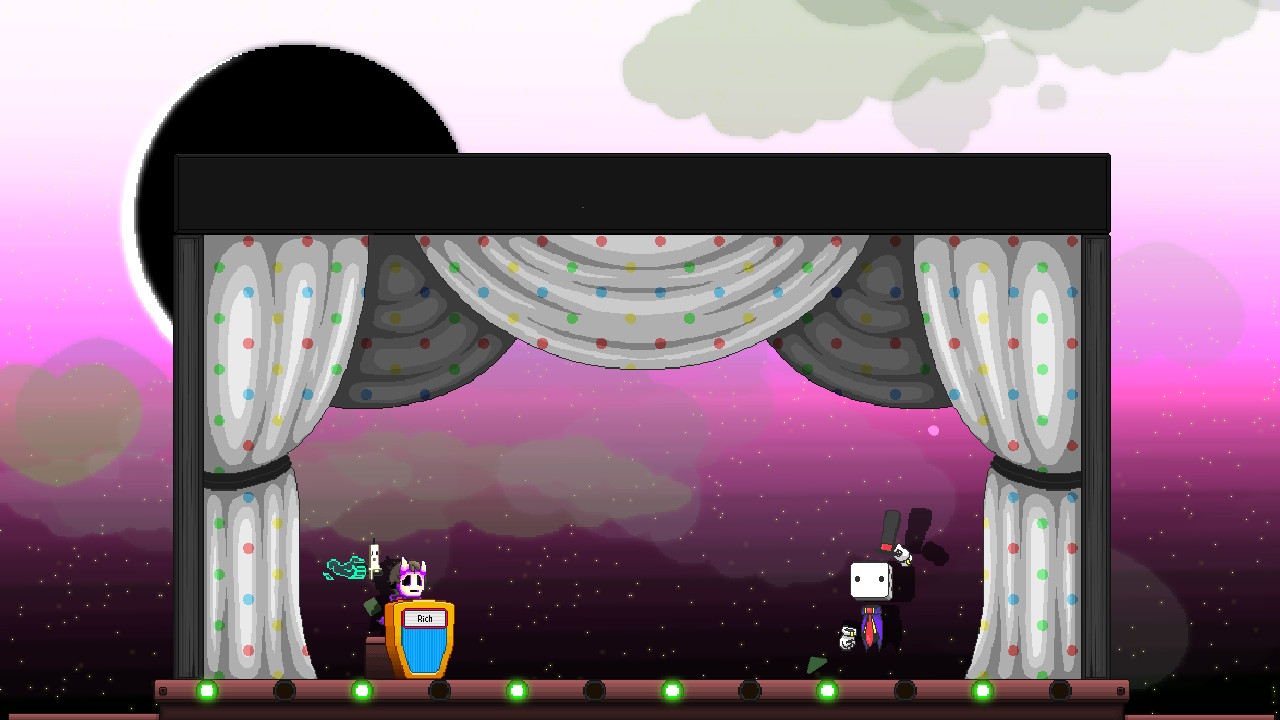 UnderHero is a charming charming RPG, with a combat system that is an extremely satisfying to master. It’s one that I have honestly longed for since my days with Paper Mario and the Thousand Year Door & Super Mario RPG. My biggest complaint about UnderHero is that it overstays its welcome towards the end of the experience, with some padding that lengthens out the experience to 12-15 hours. This section of the game is mostly platforming, traversing rooms and solving simple puzzles, and sadly, not much combat. The combat is one of this game’s strengths, a shining example of how to make turn-based combat feel active and fresh. Leaving the combat out of this area for the most part breaks the great flow this game has- or had- going for it. I am glad the final confrontation of the game doesn’t disappoint, and UnderHero concludes its amazing, yet quirky adventure leaving you happy end engaged. For now, UnderHero has filled the nostalgic void left by earlier Paper Mario entries, and I can’t wait to see what these developers do next.