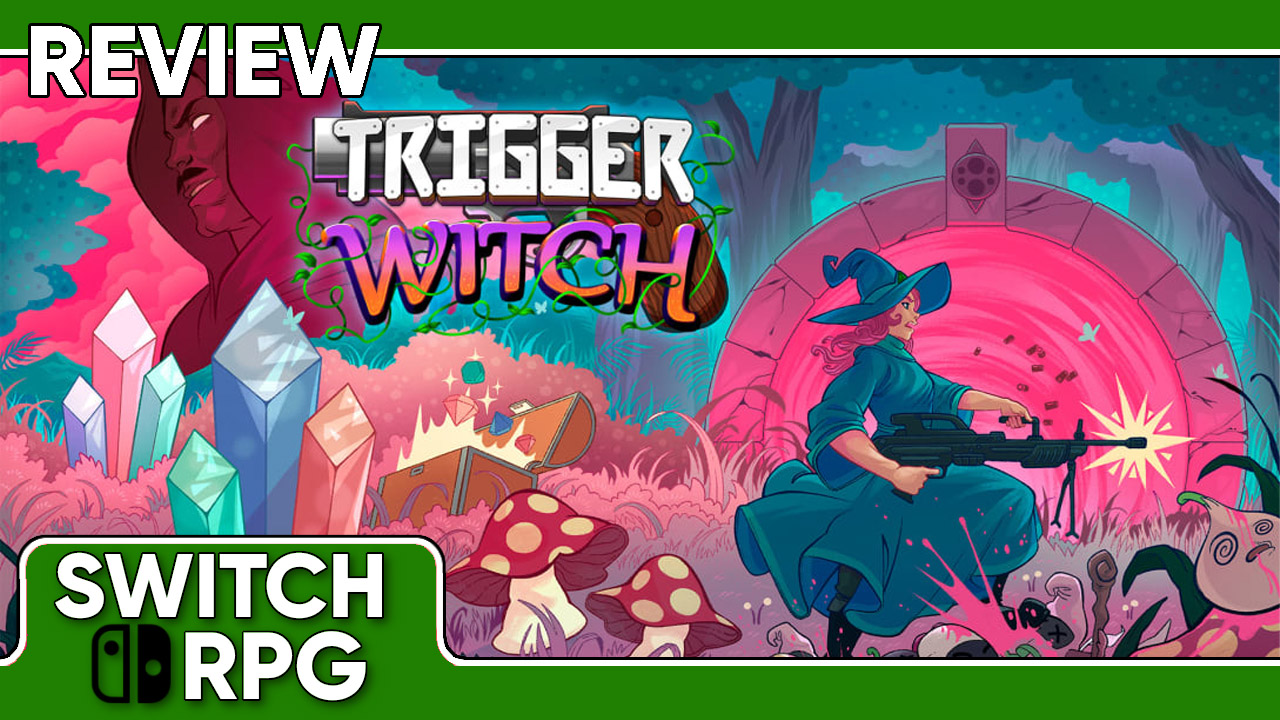 The love of gaming can truly connect people across any distance, can’t it? No, I’m not referring to online gaming. You see, if one were to leave my little corner of the world in the southeastern United States and travel around the globe, the farthest away they could before they began coming back would be somewhere around Auckland, New Zealand. Auckland is the home of indie studio Rainbite, developers of my all time favorite indie game, “Reverie: Sweet As Edition.” Playing Reverie made me feel as if my childhood imagination had been made into a game, and I will forever adore it.

The latest outing from Rainbite is Trigger Witch . The developers have taken a different path from Reverie’s lighthearted adventure by choosing an action-packed, twin-stick shooter with light RPG elements for Trigger Witch. It’s a vast departure, to say the least, so I had my worries. Those worries soon faded, however, as lo and behold…Rainbite had done it once again. 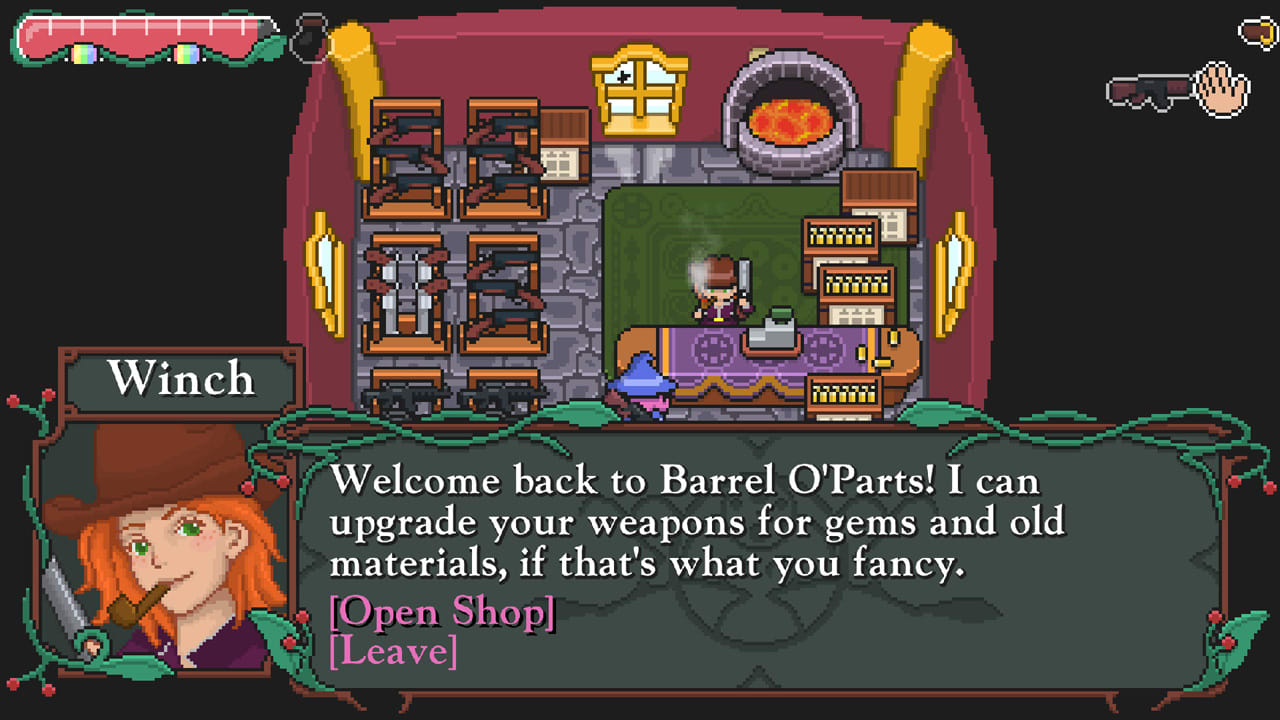 The story follows young heroine Collette as she is beginning to prosper into one of Evertonia’s most naturally gifted witches. Evertonia has long abandoned ritualistic magic that witches are commonly associated with and converted to “Ballasticism.” As the name suggests, Ballisticism is a firearm-based religion and its existence was founded upon the discovery of The Great Rift. The Rift is a phenomenon in which firearms have materialized out of which in turn leads Col and her “sisters” to believe that only those that are worthy can be chosen to carry on the magick art of Ballisticism.

Col’s first trip to the rift is a turning point, however. A hooded figure appears from the enigmatic portal and sets in motion a series of events that produces another question with each answer. It all builds up to a chaotic, yet satisfying endgame with a twist that you will never see coming…I promise. First-time game writer Jono Pech was “in his bag” with Trigger Witch – as the youngins would say. 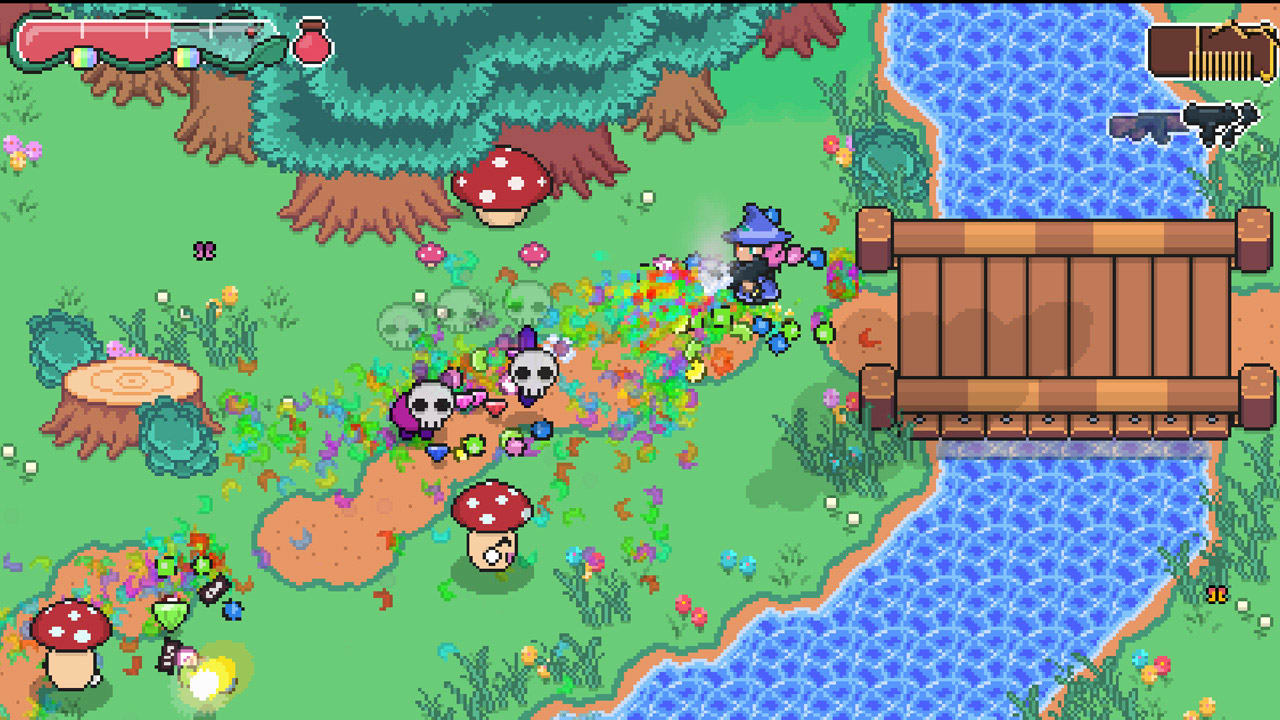 Trigger Witch may be a twin-stick shooter with RPG elements sprinkled about, but if you could imagine “The Legend of Zelda: A Link to the Past” with gunplay added to the mix, you’ll have the most accurate picture of how it plays and looks. The action is chaotic and enemies are numerous and well designed. You’ll face monsters that range from the likes of insects to hovering metal shields, each of which explode in a gory palette of blood spatter. Each screen of the battlefield can transform from a serene landscape to a canvas of blood in a matter of seconds. Trigger Witch does include a child-friendly option of having enemies explode into confetti instead — this feature is downright hilarious.

Trigger Witch will have Col visiting dungeons in search of answers. Each is unique aesthetically, but they all feature a map to be found in a chest to help her navigate the stronghold,as well as keys and a boss battle. Familiar? Not all of Trigger Witch is built around fun-and-gun elements, mind you. There are also puzzles that Colette will need to solve to advance deeper into the dungeon, or on occasion find a rare gun part for use in weapons upgrades. Upgrades can also be purchased at the local armory. By the conclusion of Trigger Witch, Col will have amassed a dangerous arsenal and will have become a “One Witch Army.” Weapons upgrades are essential as Trigger Witch isn’t what I would call an easy game. Fortunately, the game has multiple difficulty levels which can be changed at any time. If you haven’t played a twin-stick shooter in a while, there is no shame in dropping the difficulty down a notch or two until you’re able to readjust.

If changing the difficulty is too much pride to swallow, Trigger Witch offers a more fun solution – Co-op. A second player may join Colette on screen at any given time, doubling the hot steel chaos. Co-op offers absolutely nothing else to the experience (the difficulty isn’t altered at all) but it is fun. In fact, the feature feels like a last second addition, but it works and also gives the game a replayability factor that it would otherwise not have.

Remember a little earlier when I asked you to imagine “The Legend of Zelda: A Link to the Past” with guns? I am asking it again because the entire aesthetic of the game is very similar to that of Nintendo’s legendary SNES classic. The game has a knack for showcasing pastels, secondary, and tertiary colors that one can’t help but appreciate.

In regards to sound, “Trigger Witch” is a joyful roller coaster ride. In one moment, Col will be adventuring to ambient melodies that evoke nostalgia. In the next, you will have her scrambling about to heavy metal guitar riffs and crashing cymbals accompanied by cacophonous gun blasts. The result is a well balanced cauldron (pun totally intended) of sounds that provide the perfect atmosphere for this type of game. 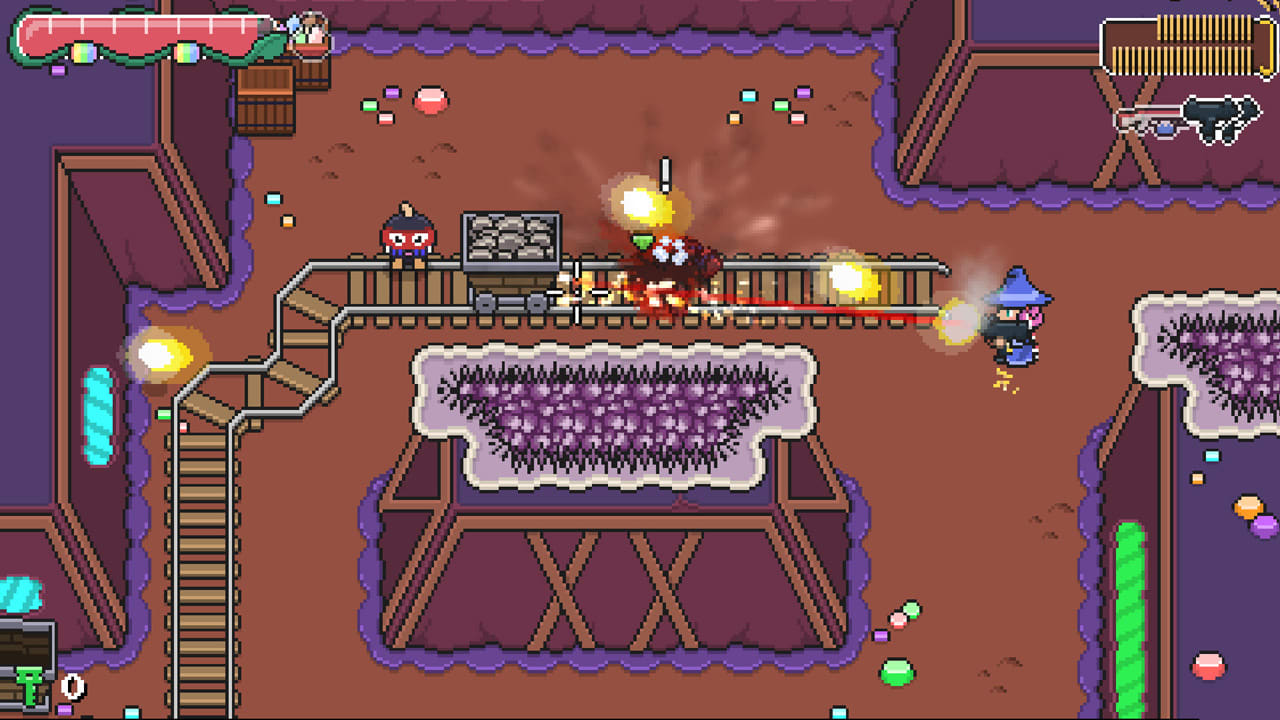 As this is my last review for SwitchRPG, I couldn’t be more thrilled that this journey will end with “Trigger Witch.” Though the game may be a bit short, it’s perfectly paced. The story is a bit outlandish but also wildly creative. It’s the equivalent of a page-turner book that keeps you wondering what will happen next. Gameplay is remarkably smooth, but be warned that “Trigger Witch” is completely impossible to play in handheld mode IF YOU HAVE BEEN EXPERIENCING JOY-CON DRIFT. The same can be said for most games, but it’s especially true with a twin-stick shooter like Trigger Witch.

I believe in my heart that the team at Rainbite are destined for great things. “Reverie” captured my imagination and ignited a love for indies that I hadn’t had before. Trigger Witch proves the success of Reverie wasn’t a fluke and that Rainbite is here to stay. PLAY THIS GAME.

I’d like to take a moment to thank everyone that has been a part of my journey at SwitchRPG. I have the best colleagues in the world and it has been a true pleasure to be on this team with them. My sincerest thanks to everyone that has clicked on our articles throughout the years. You helped make my dream come true! Much love to all of you, and always remember…Zelda is an RPG.