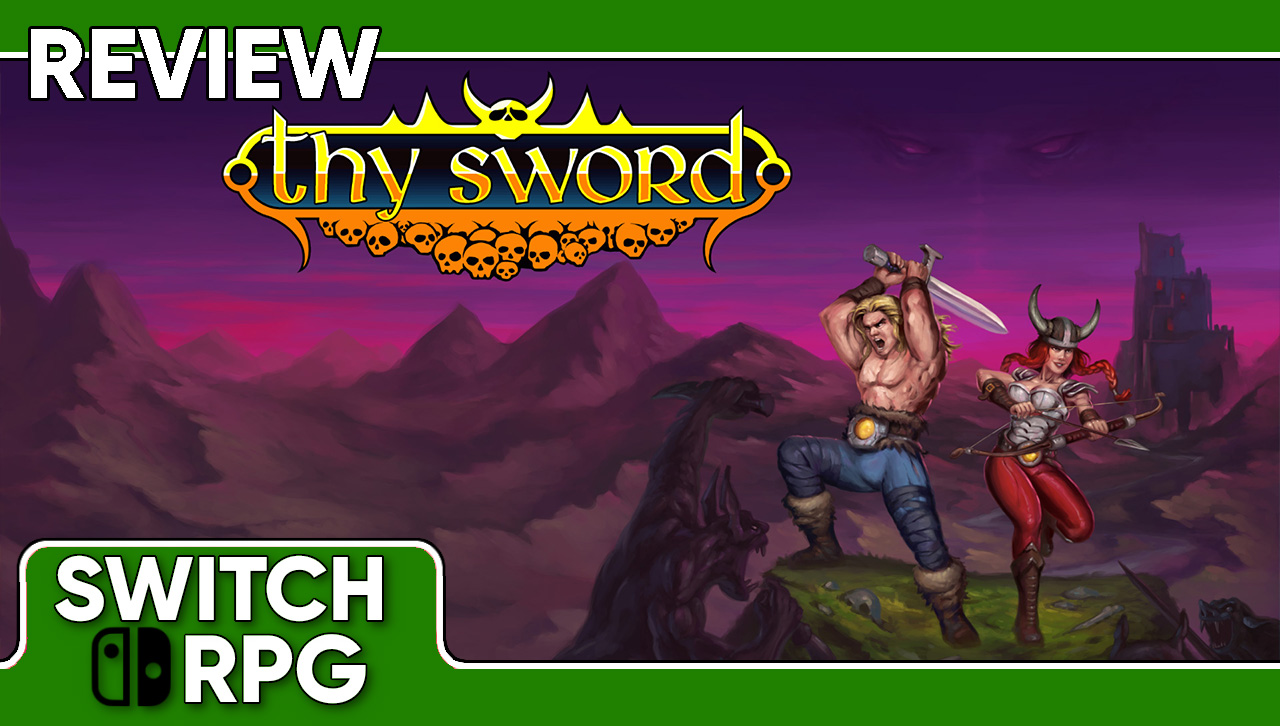 If there’s one element that’s often underrated and perhaps unnoticed by many in the realm of video game design, it’s the amount of space and density of content featured on a single screen. The Legend of Zelda presented one section of its world at a time, teasing a much larger whole while still offering a substantial challenge with each environment. One of my absolute favorite titles for the Game Boy is Donkey Kong, released in 1994 – though the game starts by echoing the original arcade title, it expands upon its concept by giving Mario an arsenal of new techniques to tackle single-screen challenges presented by the devious Donkey Kong.

Though Thy Sword doesn’t offer as expansive a moveset for its playable characters, it capitalizes on the challenge inherent in a single screen of obstacles, enemies, and treasure. In building upon the foundations of predecessors like Barbarian, Golden Axe, and even Bubble Bobble, this game offers a pleasant throwback that capitalizes on the roguelike nature of arcade titles.

Thy Sword possesses both single player and co-op modes and begins with offering players the choice between a Barbarian and Valkyrie player character. Though the former is stronger, the latter comes equipped with a bow and quiver of ten arrows, and both share a powerful-yet-risky decapitation attack mapped to the Y button, attack and block buttons mapped to the R and L triggers, respectively, and of course, a jump mapped to the B button. Lastly, there’s a room-clearing attack that can be activated by holding and charging your attack button, but it can only be used once in a zone – a set of five rooms. You’ll need to use all these tools effectively in order to defeat all enemies on screen, which unlocks progress to the next room of a zone. 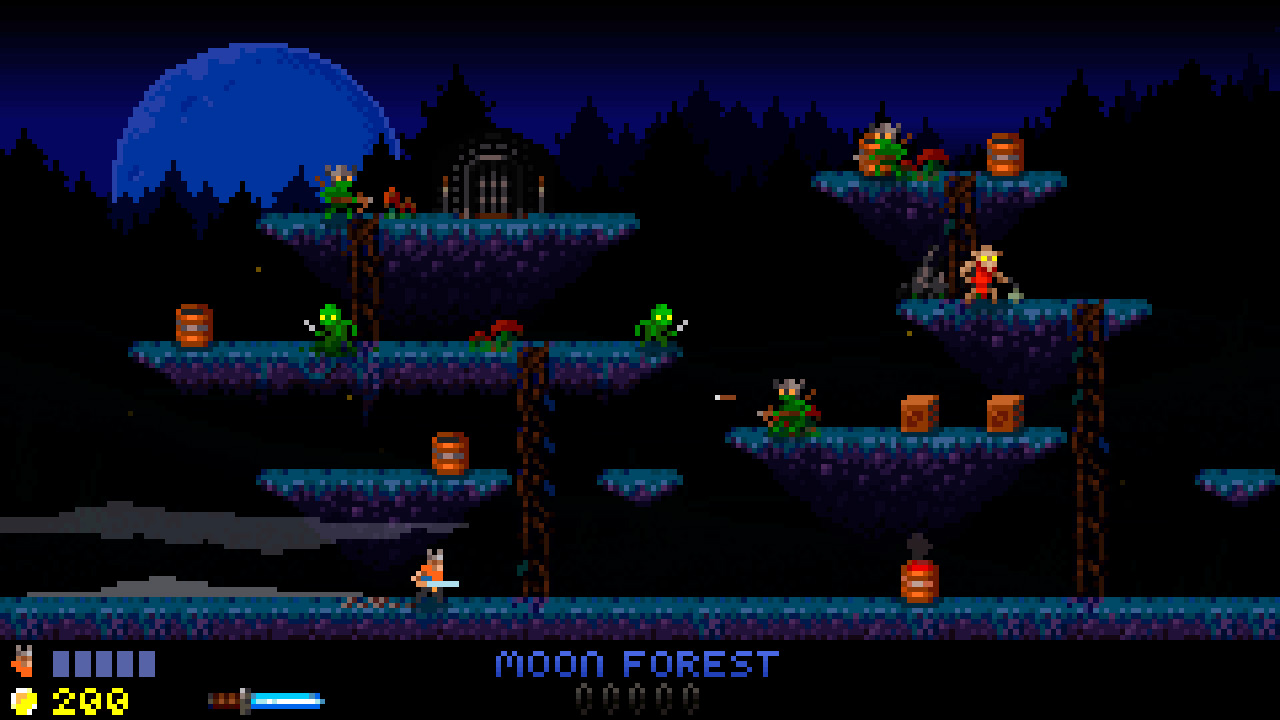 Enemies range from mice and bats with simple behavior and attack patterns to more dangerous and nuanced ogres and orcs. While your block is mostly unbreakable, there are a few exceptions, such as the odd attack angles of bats and the occasional strike that sends you tumbling off a platform. For the most part, you’ll want to be as careful and considerate of enemy positioning as possible, as you have a limited health pool and an even more limited set of lives… depending on your difficulty mode. You can progress with infinite credits via the beginner mode, or go for a more classic three-credit mode or truly heroic single credit mode. In-between zones, you’ll have a chance to spend cash dropped by slain enemies on a blackjack gambling game, healing items from a cleric, or equipment from a merchant.

You’ll find yourself taking on a more difficult (and often night-themed) final level at the end of a zone, or you’ll face one of the game’s five bosses, grander encounters against a hefty foe with a variety of attack patterns. Though the healing and equipment options you buy in-between zones can give you an edge, the limited mobility of your character will be pushed to the test as you take on these enemies.

Thy Sword has nothing more than a bit of poetic flavor text as an intro to its premise – there are some magical gems to recover from across the land, each guarded by one of the boss creatures. These bosses get a bit of dialogue themselves, though many have some odd quirks of delivery that sell their eldritch horror – a certain “Deep One” boss design comes to mind. Likewise, the shop NPCs also possess a bit of text and a wandering adventurer at camp will give you hints at secret, unlockable characters and some more subtle mechanics present in the game. Outside of this, however, Thy Sword is an arcade premise – you have to kill everything to save the realm, so you best get to it. 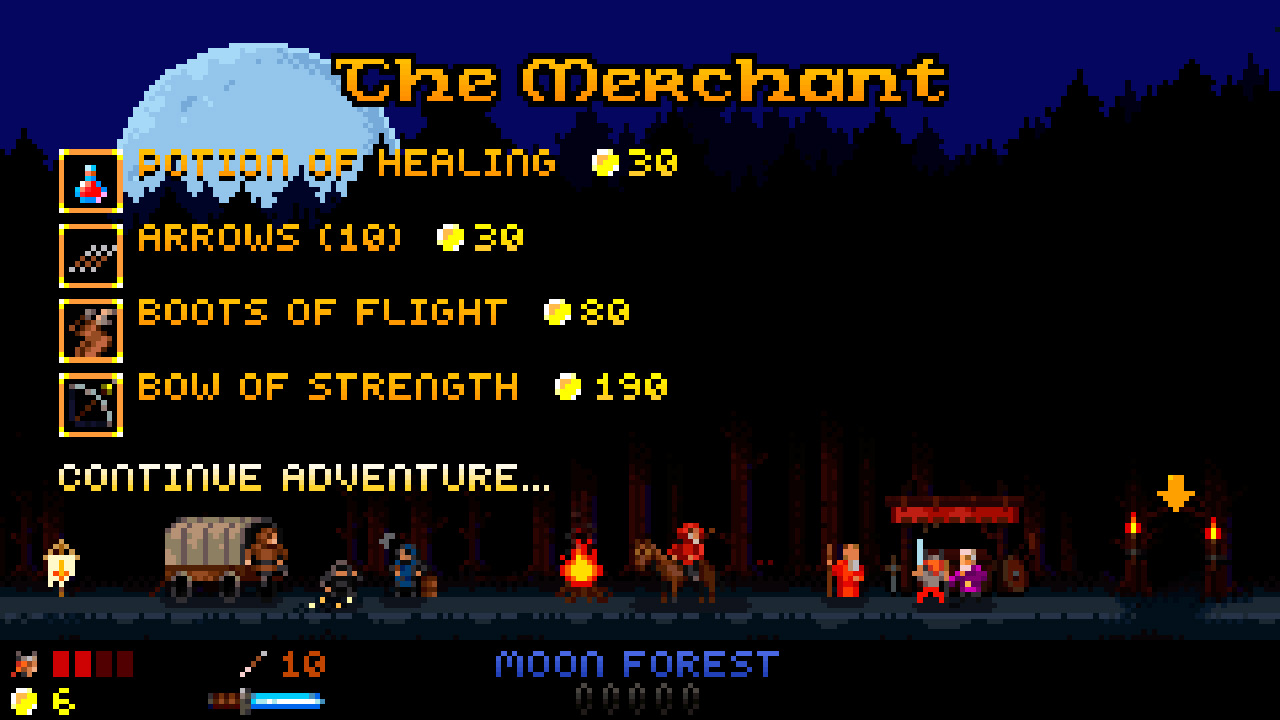 Thy Sword’s aesthetic truly feels pulled from an NES title, though I’d argue the precise details of a number of its sprites manage to make the most of extremely limited space. Every enemy is both easily identifiable and stands out against the dark backgrounds of the title, yet are still simplistic enough to pepper the screen without feeling overwhelming. The bosses feature additional animation and detail in order to truly stand out, and the environmental design does a fair job of communicating the fantastic, yet-somewhat-predictable biomes of each realm. What sells the retro vibe of the game are actually its delightful gameplay filters, allowing players to switch to a dark, grid-based filter or my personal favorite, the smooth and bulbous CRT filter. The music is also delightful and loops enough to worm its way into your skull, whether you like it or not.

Though it’s a fairly straightforward premise, Thy Sword can present a bit of difficulty due to the precision and care needed to move from one room or zone to the next unscathed. There are a select few enemies that demand decapitation in order to stay dead, and a few environmental hazards that can throw a wrench into a smooth playthrough. Boss battles require a bit of familiarity in order to avoid feeling overwhelmed by their larger presence and more complex attack patterns, and the game’s high equipment and healing item prices make saving and spending money a big risk. Similarly, there are certain characters the player can encounter after completing specific events, with some requiring a price to be paid, which can add another level of frugality. 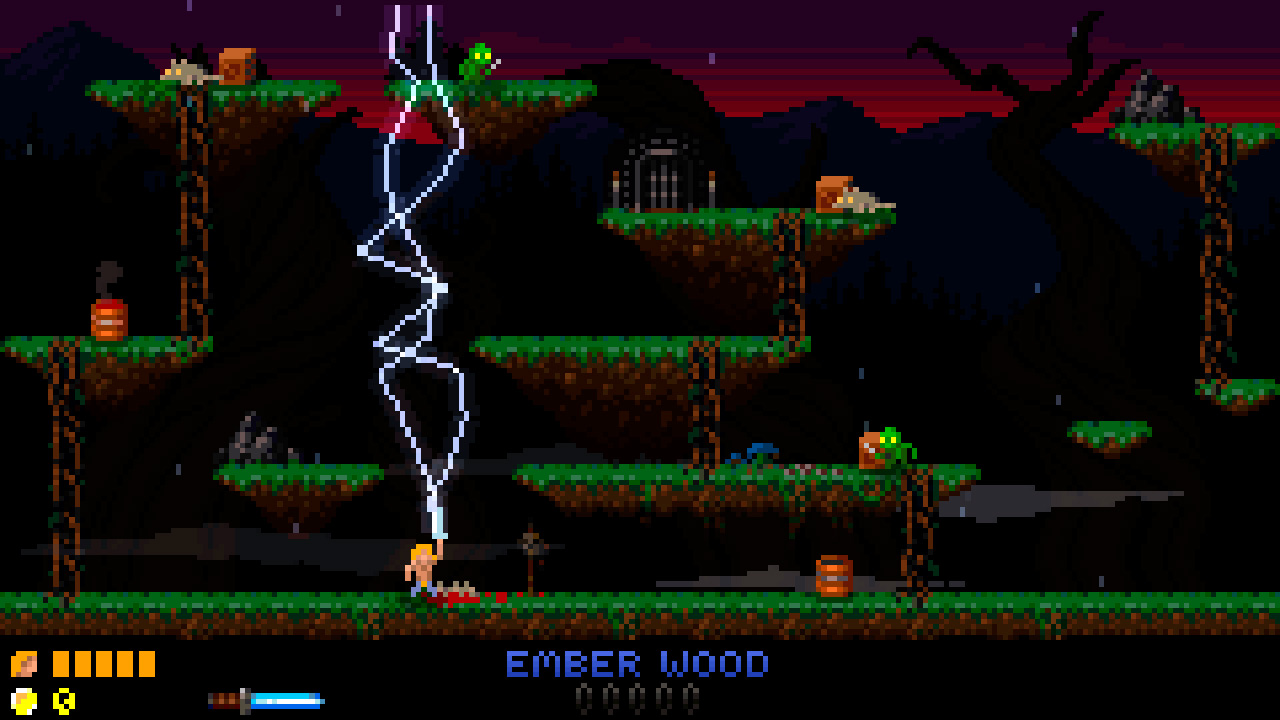 Thy Sword’s concept is sound and its gameplay, though seemingly basic at first, offers a fair amount of variety and nuance. Though I’d argue the unlockable Viking strips a fair bit of challenge from the game, there are a number of different play styles to try out… when the game decides to save them. For some reason, I’ve lost all progress related to my unlockable characters upon restarting the game, and while they are easy to unlock once aware of the strategies, it doesn’t feel fair to make a potential second player wait on using their preferred character each time you boot up the game. I am assuming this is a bug, but it’s one that should be addressed, as it kills a great deal of enthusiasm for the title.

There isn’t much else to say outside of Thy Sword’s main campaign and silly arena battle side-mode, but that’s not necessarily a bad thing. For a budget purchase, this game offers enough arcade fun to be worth a handful of your hours and is much more enjoyable with a partner. There’s something to be said about its unabashed, straightforward gameplay loop and simplicity, and although its role-playing features are somewhat light, it’s still a fantastic adventure to be had for a relatively low price.