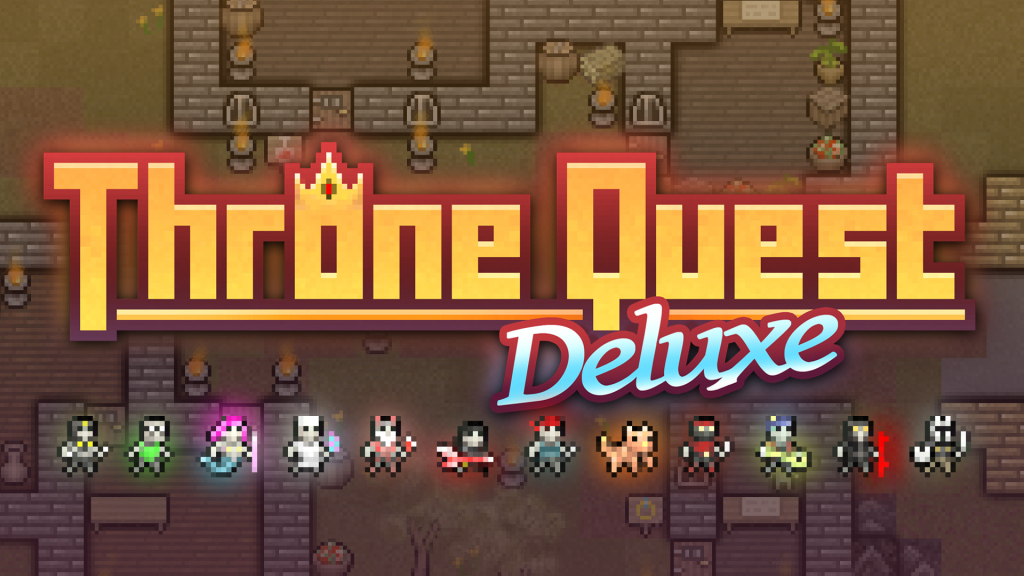 Sometimes, we play games to turn our brains off. The grind of a Role-Playing Game can be comfortably mindless, performing a set of predictable actions in order to advance progress and continue down a narrative. But what if there is no narrative? What if all that exists is a grind? Throne Quest Deluxe asks and answers this question, but is that a game you are looking for? Read on and find out.

Throne Quest Deluxe has the player taking on the role of an unnamed hero, who scours the land in order to trip locks and make their way to a castle at the middle of the sprawling overworld map. To do so, they’ll need to gather enemy drops in order to buy healing items in order to brute-force their way through the dungeons that are necessary for progression. Of course, a slow and gradual level grind also takes place thanks to the experience that each enemy grants upon death. There are very few inputs to learn in the game, though there are no in-game tutorials to explain any sort of information in the title. The endgame encounter is marked on the overworld map, accessible via pressing the minus button. One can press the x button in order to call up the inventory, where they can sort through their accrued items and set equipment and quick-select items via pressing the proper button combinations. This menu is by far the most complex feature of the game. 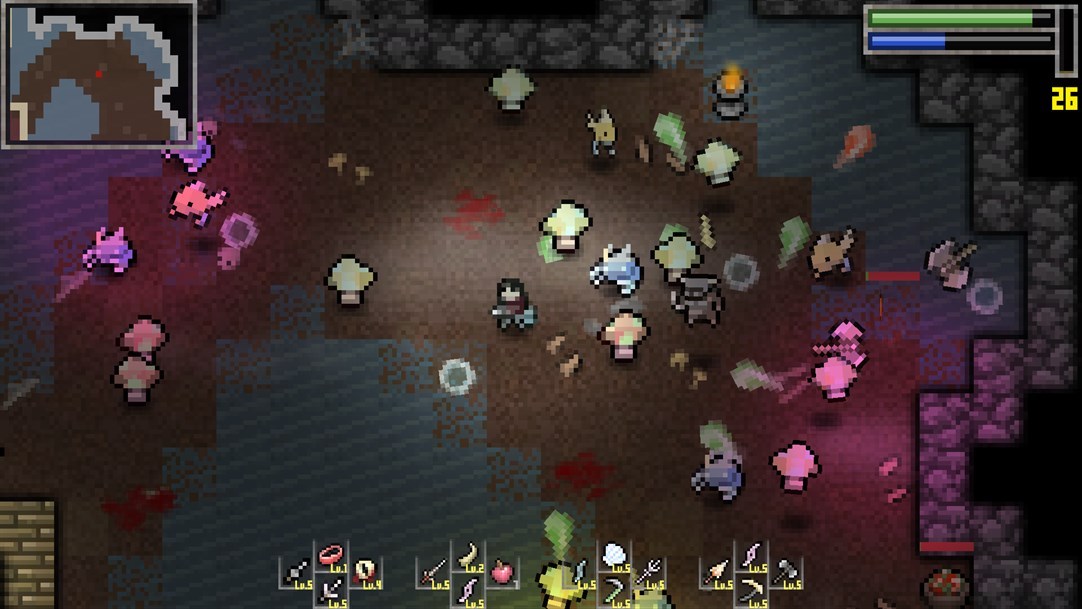 Combat is straightforward, as the game represents a pseudo-twinstick shooter more than an RPG. Pressing the right control stick will cause themed projectiles to spew from the player character. These themed projectiles are dictated by the weapon equipped, with each weapon possessing specific qualities that alter their rate of fire. Each weapon also possesses a particular special attack, which is executed when the player has defeated enough enemies to fill the special bar. These are a number of screen-filling attacks that range from single streams trailing from the top of the screen to the bottom, to spread shots that scatter in every direction. This is the most variety one will find in terms of the player character’s abilities, though equipping items to the quick-access slots will factor into their longevity and approach.

Enemies vary in terms of aggression, with some actively seeking out the player, while others react to taking damage, though the most formidable possess projectiles of their own. Each enemy has their own health bar, but these are less a concern than the statistics of the player’s own weapons, which will determine how much damage they deal to enemies.

Aside from this, there are several other elements of the game that provide assistance. Shops can be found throughout the overworld that offer the most substantial healing items, but they cost a pretty penny. In order to buy them, the player will need to sell off the many enemy drops they’ve accrued for extra cash, but the method to do so is convoluted. Putting the desired item atop one of the shop selections will call up a sell page, but this- like all of the other aspects of the game- are never communicated. In short, most of Throne Quest is trial and error.

The title has no real narrative to speak of in Throne Quest, but the game still possesses a strange, melancholy vibe due largely to its surprisingly lush soundtrack. This one particular element of the game that feels strangely out of place, as the quality of the music is much higher quality than the rest of the aesthetic touches. With that said, there are only a handful of tracks, and as atmospheric as they are, they’ll turn into unimportant background noise in the long run. 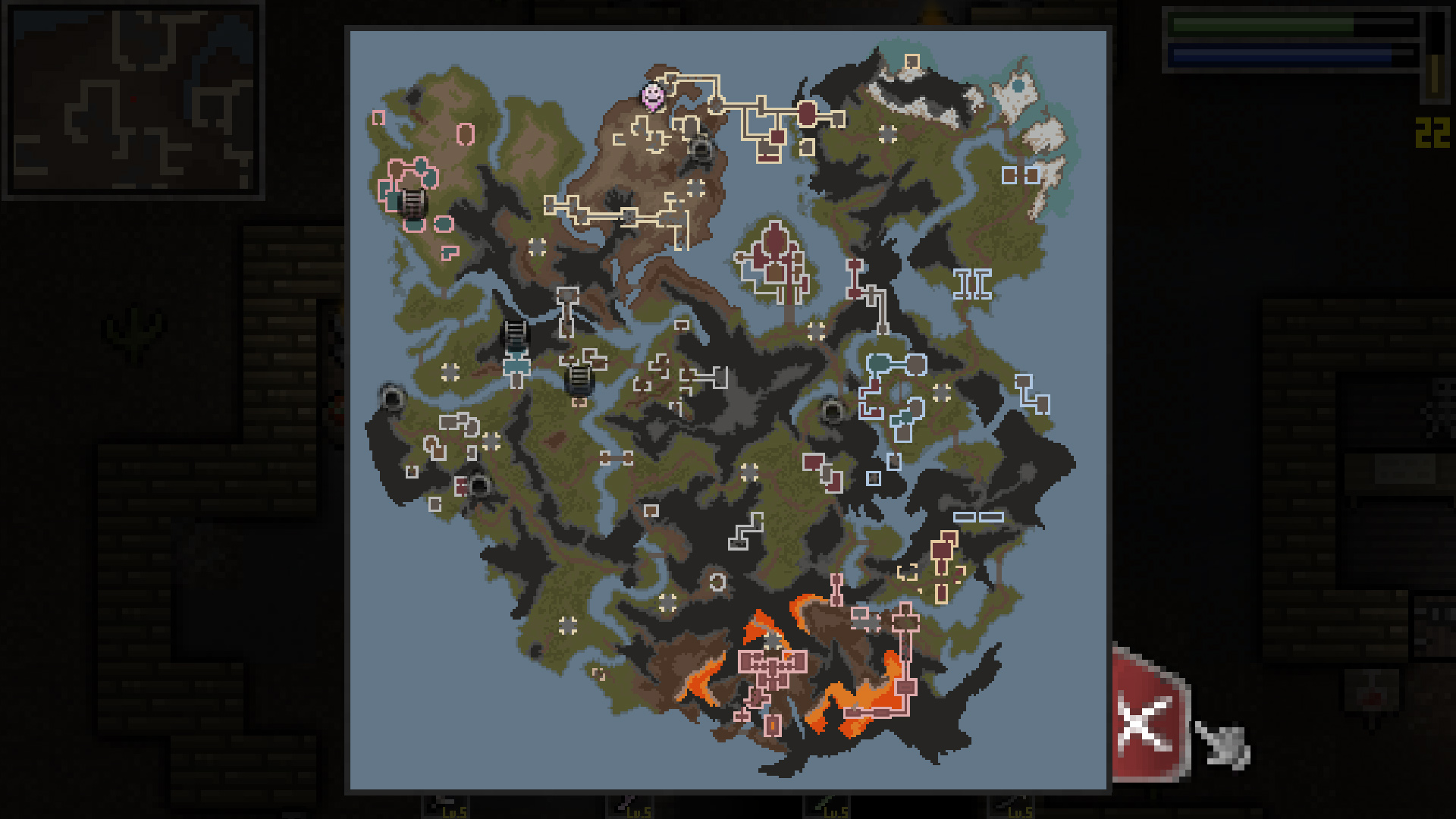 The low-resolution, pixelated overworld graphics and character models are discernible enough to evoke a particular biome, setting, and breed of fantastic beast, but they’re hardly memorable. Despite the number of weapons the game has on display, the aesthetic changes they make to the player avatar are noticeable, but not always comprehensible. The kunai weapon does turn the player into a ninja, and the electric guitar does give their character a grungy, metalhead sort of vibe (with matching overdrive sound effects), but these aren’t high quality enough to come across as endearing, simply a thoughtful change of pace. Likewise, although there are a wide variety of enemy types, their predictable, yet frenetic movement patterns both make them feel generic, yet move far too quickly to get a decent look at. The few exceptions, such as the stubby ghost enemy type, stand out because of their simplified appearance. On the other hand, the equipment drops are extremely diverse and detailed, to the point where it feels that most of the aesthetic design was dedicated to these elements over anything else.

It is hard to find all that much more to say about Throne Quest, though that’s more a fault of the game than anything else. The experience is extremely bare-bones, with the main quest locked behind a trek across the entire overworld map and through each locked dungeon gate. There are optional areas of the overworld map, such as a few caves that grant a specific weapon type, but there is little else to do in the game other than grind currency, grind for specific equipment drops (which have stat-altering capabilities that don’t vary gameplay all that substantially), or complete the main quest. 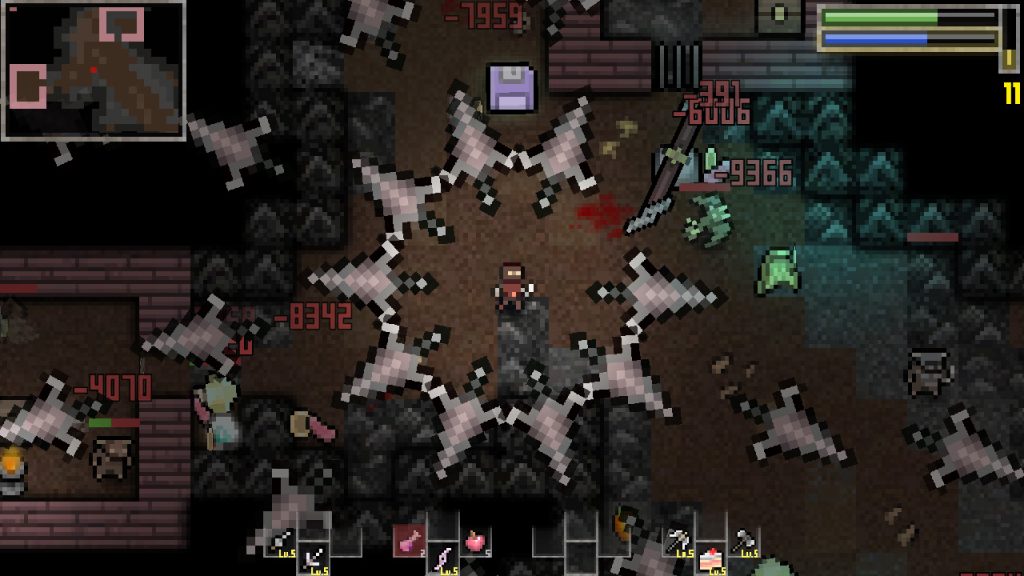 Mind you, this endeavor may take you around four to six hours to complete, simply due to the character progression pacing and figuring out where the critical path towards the main quest starts and leads. There are a few cheap tricks utilized to pad this time out, as well: switches that open paths that need to be backtracked to reach, which in turn may lead to another switch that leads back to the first switch. Though the size of Throne Quest’s overworld and dungeons are both equally impressive, the game is the essence of an RPG boiled down to its bare essentials. Rather than offering unique respawn and puzzle solving mechanics like Fairune, however, this game does little to evoke much personality. Though its price point is suitable and the fact that it was developed by a single individual is commendable, there are more compelling titles to be found at only a few dollars more. Still, the game runs competently and offers some fairly nice dungeons to traverse, and that’s worth taking a seat to check out.