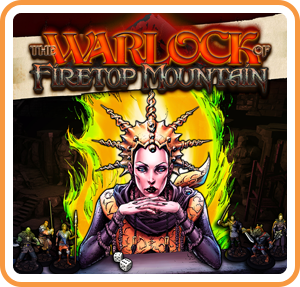 Sometimes, when you’re sitting at home alone, you might think to yourself, “I really want to play Dungeons and Dragons.” I can’t blame you, you sound like a person of exquisite taste. However, there aren’t many ways to get the feeling of character-driven storytelling, skill-checking, and of course, good-old dungeon crawling in single player form. Fortunately, there has been a slowly developing Role-playing subgenre devoted to emulating the gameplay found in tabletop games. Titles like Crimson Shroud and Hand of Fate don’t just attempt to evoke the story-focused, vignette-centric writing of these games, they go one step further by implementing dice rolls and other luck-based mechanics. This adds a feeling of unpredictability into the solid role-playing foundations of these titles, making for memorable and unexpected engagements.

In the same vein, The Warlock of Firetop Mountain seeks not only to retread the pages of Steve Jackson and Ian Livingstone’s classic gamebook, but create a satisfying Role-playing game worth replaying many times over. With its multiple narratives and straightforward combat, does this game feature enough depth to justify multiple replays, or does the same old story get too tired, too fast?

The Warlock of Firetop Mountain (henceforth Firetop Mountain) is primarily a story-driven Role-playing game, where players progress through the dungeons beneath the titular mountain in order to achieve both a character-specific quest and defeat the mysterious warlock himself. Starting with a choice of one of four miniatures, players decide which character they wish to enter with and respond to a series of dialogue prompts as their character progresses through a series of interconnected rooms. Almost every one of the small, diorama-like rooms in Firetop Mountain contains some sort of event, and even then, those that don’t seem to have anything going on may actually have quite a bit more backstory than it seems. Specific rooms in the dungeons and beyond have character-exclusive dialogue trees, oftentimes throwing a neat curveball that offers more challenge, or perhaps even a chance to understand the lore of the world in greater depth. 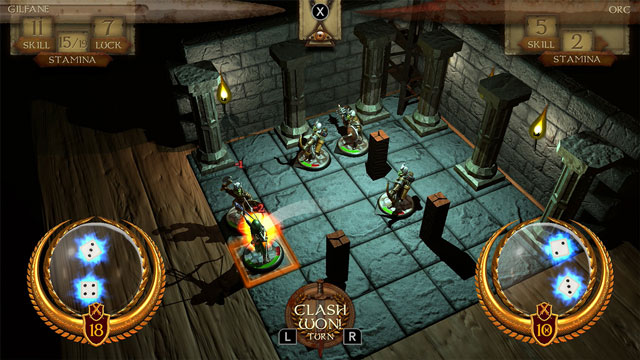 Although dialogue options and the proper selection of answers is a huge part of the game, it does also possess skill-, luck-, and strength-check mechanics to be utilized throughout the environment, with certain characters having traits that default success options and open new paths. In addition, the game has a simplistic, albeit effective combat system that features plenty of enemy variety. Similar to chess, or perhaps a grid-based strategy title, the player moves their character miniature across the board and can choose to attack other enemies with a number of skills, the most powerful operating on turn cooldowns so that they cannot be too consistently spammed. A particularly neat element is the clash mechanic, which occurs when a player and enemy attack one another simultaneously. A dice roll determines whose attack will overpower the other, which can be nudged in the player’s favor at times. Most of the enemies in the game operate on their own attack and movement patterns, so studying their behavior can often assist in overcoming them- or at least, leaving with as few scratches as possible. That being said, there are definitely combat scenarios in which damage is unavoidable, so managing health items and attack options is crucial.

There is also the risk of failing text-based scenarios, which can result in reduced luck, skill, or most importantly, stamina, which can make Firetop Mountain feel frustrating. The frequent dice-checks are rather oddly determined by rolling low instead of high, so a moment of panic might cause a player to nudge their outcome into an unfavorable number. Some success states will only trigger with exceptionally high skill in certain areas, so attempting to explore the vast catacombs of the environment can feel like an uphill struggle. Each run does gift the player with three resurrection stones- essentially, respawn chances- that allow them to pick their route and choices a bit more carefully, so the game is not always so punishing. In reality, Firetop Mountain’s game world is also not all that large, and considering each character starts in the same area, one or two failed attempts at reaching the end should be enough experience in order to understand and prepare for what lies ahead.

Because the game world is small, the developers rely on the variety of characters in order to extend the game’s playtime. While each of the character miniatures features their own model and combat skills, the true delight of Firetop Mountain are the variety of unique lines each character has for different scenarios. They also each possess a “main quest” that involves obtaining a certain item or objective while on the way towards fighting the Warlock, which can unlock codes for use upon completion in an alternate, combat-based mode- more on that later. Within each playthrough, the characters can also trigger unique events that specifically call upon their backstories and personalities, a neat touch that helps differentiate runs. Likewise, there are numerous branching paths that can increase or endanger one’s chances at survival, so experimenting with each and determining which is the most beneficial route can be an enjoyable prospect. The ultimate goal is to find the three mysterious keys that can unlock the chest to the Warlock’s true treasures, whatever route may take you there. 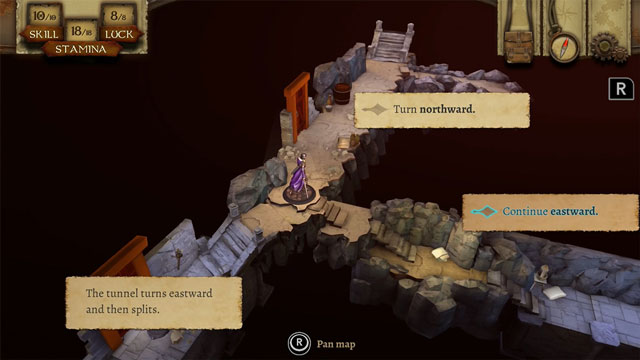 Where Firetop Mountain differentiates itself from other titles is the way accrued experience, or souls, is spent. Defeating enemies during story runs adds souls to a persistent tally, and unlike Dark Souls, this currency stays with the player upon spending all of their resurrection stones. It can be used to purchase additional miniatures with different traits and abilities, ranging from rhino-headed warriors to half-orc rangers, on the character select screen. It works well and is logical, but it also balances the game in a delicate way- the player won’t find themselves leveling up during their trek through Firetop Mountain, instead relying on their inventory management. Making kills and enemy engagements more than just an impediment is a refreshing and very different take on Role-playing game traditions, especially when used to expand options in a vastly different way.

Should the story-centered version of Firetop Mountain become too tedious, there is the gauntlet mode, which strips away the narrative elements and focuses on surviving through multiple combat scenarios- only this time, players take on the role of an enemy type instead of a hero. Each of these enemies has their own skills and attacks that add even more personality and combat versatility to this game mode. The souls gained in the gauntlet can also be used on the story mode figurines, which is good, considering the game slowly increases their price as you move further from the basic picks.

Being based on a successful game book series, Firetop Mountain does a bit more to honor the traditions of the property. There is a small and humble timeline and history feature for Fighting Fantasy, telling the story of the first game book’s conception and featuring a number of developer Tin Man Games’ video game contributions to the series. Oddly, the Nintendo DS Warlock of Firetop Mountain isn’t present on that list, but it is nothing to get too worked up about (it’s a good action RPG). Many of the scenarios in the story mode feature some striking and impressive illustrations. Fortunately, upon encountering these pictures, it is easy to view them once more in the game’s gallery, so specific scenes and special events are never lost. 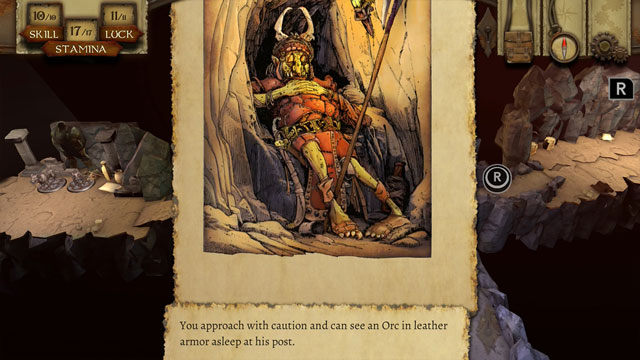 Firetop Mountain is a quaint title. Straightforward and simple like the series it was based upon, its tone is never too serious that it breaks the illusion of playing a tabletop game. There are several moments of genuine humor to be found, and there is a consistent sense of whimsical, swashbuckling adventure throughout. There’s nothing here that is particularly offensive, rather a few elements that an attentive player must keep their eyes upon. The result is a satisfying experience that features loads of variety in a deceptive manner, encouraging experimentation just as often as it pulls the rug out from underneath the player. While the combat is never too deep, it makes sense as the kind of mechanic one might see in a physical game. The writing is never too grandiose, nor does it need to be, but the loads of text and the illusion of verbal storytelling is a huge drawing point. If one prefers gameplay and active exploration over a more passive and strategic title, this likely won’t be the best fit. If you’re looking for an RPG that is approachable and entertaining, however, there are very few other options on the Switch that present as faithful and fundamental a look at the genre as The Warlock of Firetop Mountain.