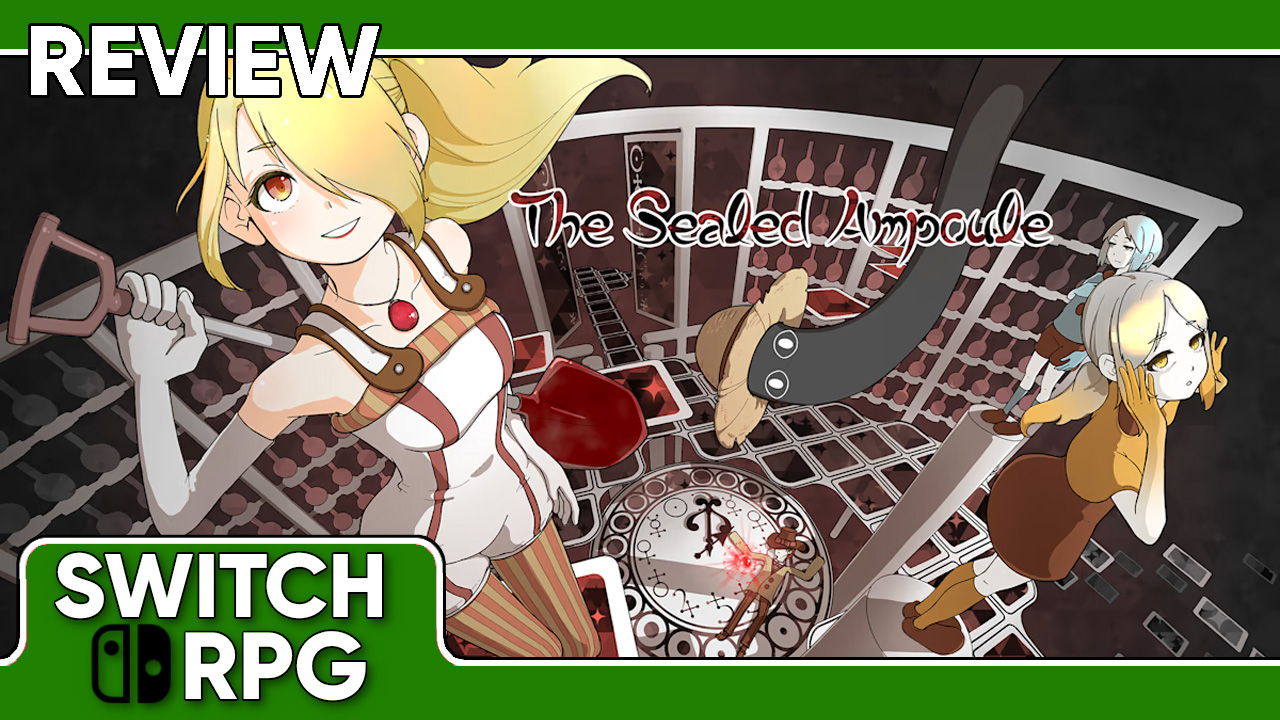 Alchemical adventures are becoming commonplace in the realm of RPGs, and I’m all here for it. It’s been interesting to see it develop in games over the years, from a magic system in Secret of Evermore to the most recent branch of Atelier entries, and of course with many indies, like Potion Permit, filling in the gaps. The Sealed Ampoule is just one of several alchemy RPGs to arrive this year…but it is anything but ordinary. In fact, I’d be shocked If it wasn’t conceived through either a fever dream or during some sort of psychedelic trip. 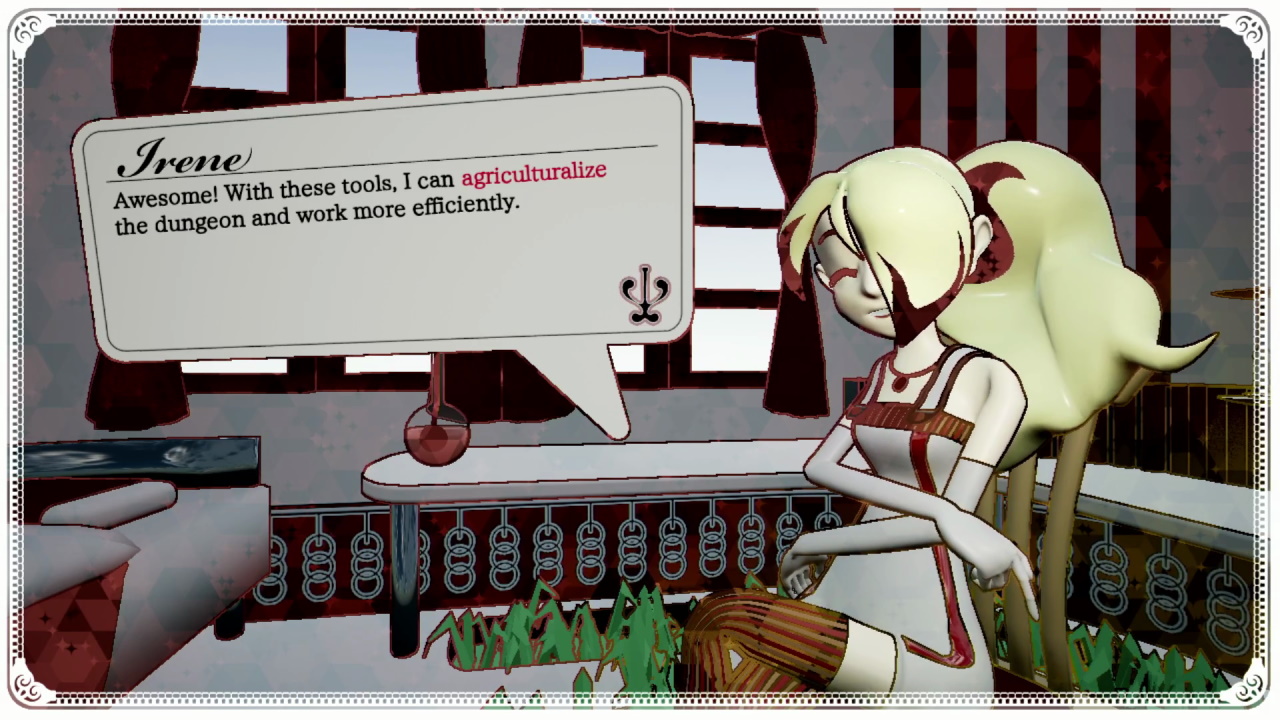 The Sealed Ampoule follows Irene, a green-eared alchemist whose mother just passed away. As a means of coping with the loss and to better support her new life, Irene decides to purchase a “pocket dungeon” in order to harvest materials that can ultimately be synthesized into finished goods and eventually sold in her very own shop. The only problem is she bought the shady eBay equivalent of a dungeon, one that is full of monsters and strange beings.

Oh, and a man within was apparently murdered after being pelted with a philosopher’s stone – the crown jewel in any alchemist’s arsenal. If that’s not enough, there’s two kids that give the Grady twins a run for their money, and a giant worm(?) obsessed with farming that ominously floats around like one of those giant balloon creatures at car dealerships.

The Sealed Ampoule, to say the least, has a peculiar narrative, though it is honestly one of those that is so bizarre that you can’t help but wonder what happens next. That said, this is a roguelite, so you can’t really go in expecting a lot of substance to it. But there’s definitely an air of mystery throughout, and it’s more than enough to keep the intrigue there. 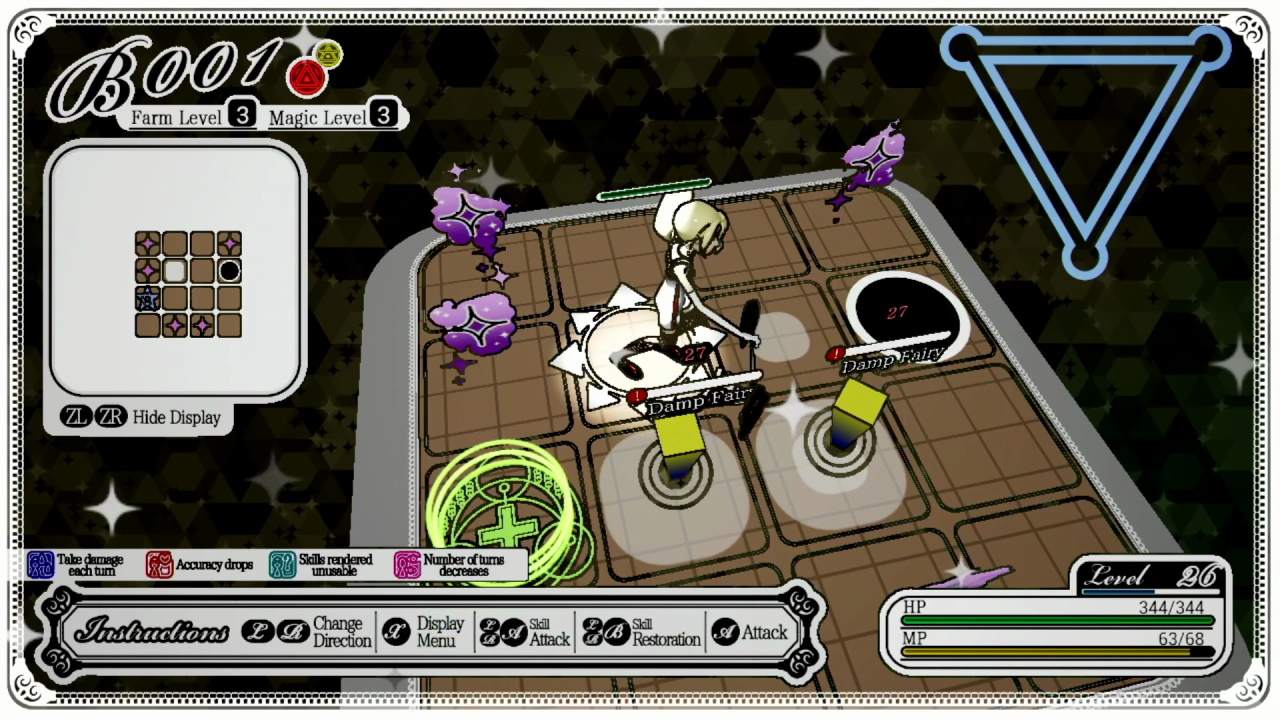 The Sealed Ampoule is a turn-based roguelite that has Irene taking trips in her second-hand pocket dungeon in order to harvest materials, grow stronger, and slowly unravel the strange things going on therein. The dungeon features dozens of floors, with scripted events, occasional boss battles, and sporadic “bonus” zones breaking up the otherwise expected flow of play. Each floor has a randomized layout, items, and enemies, and the goal is to find the exit for each in order to move on to the next. Alternatively, each staircase can also be used to double back to Irene’s room, just in case the going gets tough. And should she be completely overwhelmed and lose all health, she’ll automatically return to her room with only a portion of the acquired materials from the ill-fated run to show for it.

The Sealed Ampoule doesn’t feature any simple shortcuts to higher floors, so Irene must trek through every single floor each and every run. But fortunately, being an alchemist, she can eventually infuse each floor’s farming and magical capabilities with the components she discovers along the way, leveling them up to a maximum of three for each type. Each subsequent farming level increases the frequency of materials on the floor, while each new magical level improves the odds of finding magical circles that can heal or even improve Irene’s stats for that run.

Once the maximum farming and magic level have been achieved for any floor, it can then be “agriculturalized” and turned into a safe zone that is full of that floor’s appropriate material types. The idea here is to level up and agriculturalize each floor, as it not only provides easy access to a lot of materials, but also speeds up the process of reaching deeper floors. 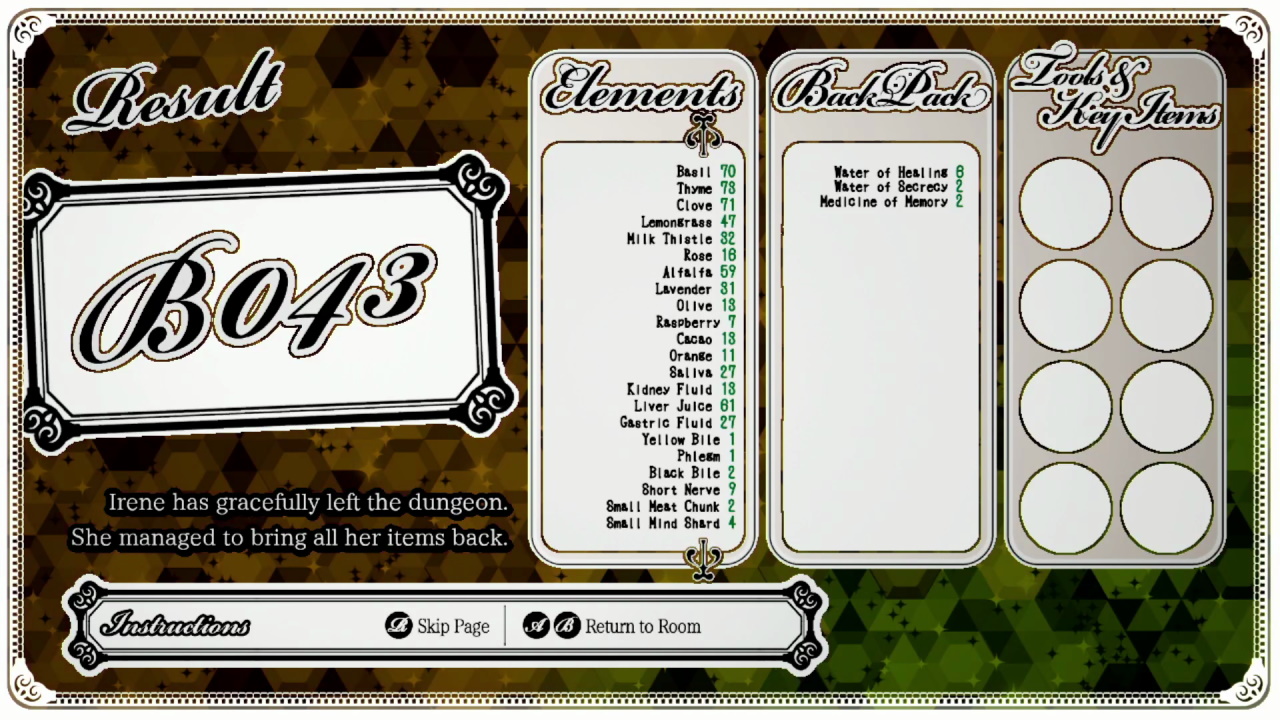 As such, The Sealed Ampoule is a grindy game. And when it comes to agriculturalization specifically, I feel that it’s a tad too grindy for its own good. You will inevitably need hundreds, if not thousands of resources between farming levels, magic levels, agriculturalization, as well as for unlocking Irene’s various skills and stat upgrades. Although she will gain traditional levels over time, the bulk of her power will come from the skill and stat upgrades only unlocked by material turn-ins.

None of these things come without a lot of grinding, and because there is no equipment to seek out or discover, the process gets a little bit boring after a while. And even though you can set up notifications when material requirements are met for virtually every step in this process, the sheer amount of material overlap between multiple upgrades makes it difficult to exactly which ones are realistically attainable at any given moment.

Combat in The Sealed Ampoule is standard turn-based roguelite fare. The idea is to not stay out in the open when faced with multiple enemies, instead retreating to a corridor in order to funnel enemies and take them on one at a time. This is especially important as Irene has limited evasive maneuvers and enemies can often cause debilitating status effects – a single poison (aka “discomfort”) can easily take a third of Irene’s health if left to run its full course. Moreover, diagonal movement is a bit more finicky than it should be, creating a small likelihood of mis-movement due to a lack of precision. Fortunately, enemies aren’t always the smartest when it comes to surrounding Irene, and savvy players can also use items and materials on a floor for cover since only one can occupy a single space at any given time.

Overall, I’d say the gameplay in The Sealed Ampoule starts surprisingly strong, but quickly falters once the realization sets in regarding just how much grinding is necessary to proceed. While grinding isn’t inherently bad, I feel that the lack of an equipment system and/or character progression independent from materials makes subsequent runs far less enticing than they could be. 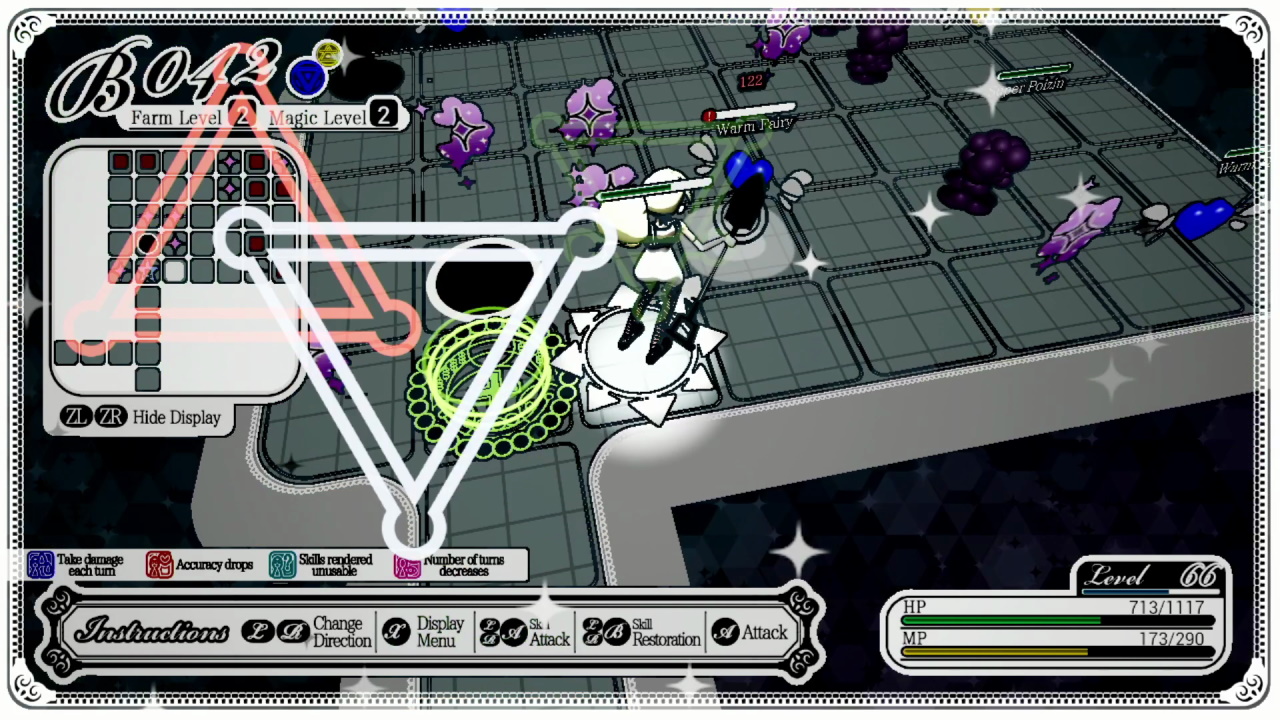 The most polarizing feature of The Sealed Ampoule will likely not be its peculiar narrative or gameplay quirks, but rather its unique, often bizarre aesthetics. Flat colors, some cel shading, and various geometrical shapes and patterns, some of which are translucent, make for a trippy, dream-like presentation. While most enemy sprites consist of basic shapes and coloring, others, as well as Irene herself, tout some features that have a plastic consistency to them (Irene’s hair, for example).

In many ways it feels like an early testing ground for 3D graphics, and though some might take issue with it, I personally feel that it pairs nicely with all the other wackiness going on elsewhere. What is sure to be most controversial is the sound design as well as the UI in general, both of which are also “out there,” but not necessarily in a good way. Sound effects lack any meaningful impact, and there’s very little music to speak of.

On top of that, I could see certain font types and sizes being difficult for some to read. Additionally, the dungeon UI takes up a large portion of the screen, and can only be temporarily turned off via a button press rather than being hidden permanently. This is by no means a “pretty” game, but I do believe there’s some beauty in its madness so long as you can tolerate the aforementioned UI oddities.

While The Sealed Ampoule deserves some merit for its unique, genuinely trippy take on the roguelite, it is ultimately held back by some questionable gameplay design. Without something like an equipment-based carrot-on-a-stick to chase, the excessive amount of material gathering required to progress quickly wears thin. Irene will gain levels and be able to acquire some skills and enhancements over time, but these are all tied back to the same material gathering that already feels bloated without its accompaniment. That said, The Sealed Ampoule still may be worth your time if you’re really wanting something different out of your roguelite, want a truly bizarre mystery to chase in its narrative, and/or can snag it on a sale.