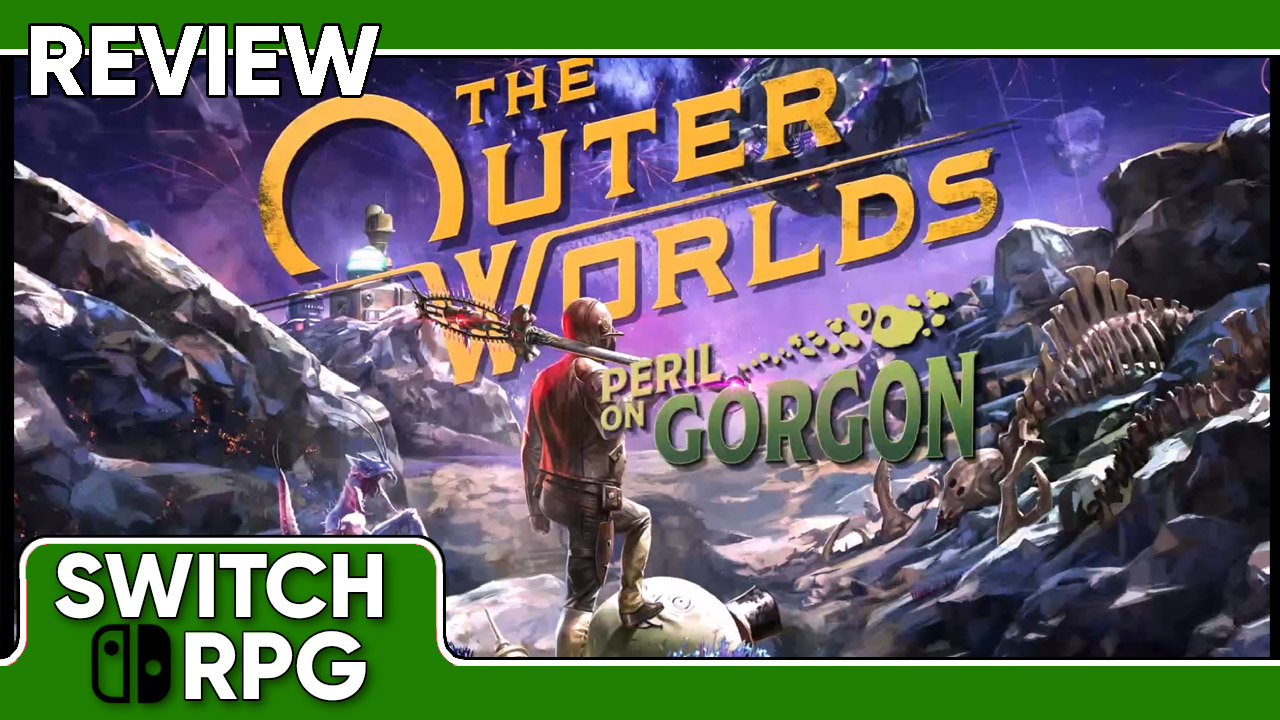 After months of fence-sitting I finally relented and purchased The Outer Worlds Expansion Pass, the two-part DLC bundle that includes the separately available Peril on Gorgon, released on the Nintendo Switch back in February of this year, and Murder on Eridanos, scheduled to hit the eShop sometime between now and January 1st. Although I found The Outer Worlds to be a stellar experience on the Switch, part of my past reluctance regarding the DLC was that the main campaign suffered from a number of performance issues at launch, leaving me somewhat ambivalent about the $14.99 asking price for each of the DLCs ($24.99 for the complete Expansion Pass). Despite how good I felt The Outer Worlds to be underneath its myriad of technical shortcomings, was the DLC really worth it?

Happily, as I noted in my full review of The Outer Worlds just a couple of months ago, Virtuous Studios (the team responsible for the Switch port) kept busy during the previous year, improving the base game substantially both in terms of enhanced visuals and smoothing out some of the more disruptive performance hiccups. It may not rest within the upper echelon of Switch ports but it’s now a respectable offering, and insofar as the nuts and bolts of getting a modern first-person RPG to run on Nintendo’s hybrid console are concerned, Peril on Gorgon clearly showcases some of the fruits of that labor. But the question I posed still remains: Is it worth it?

Read on to find out.

Acting as a sort of glorified sidequest, the narrative that unfolds in Peril on Gorgon will become accessible to players once they have checked off the mission called ‘Radio Free Monarch’ in the base game, meaning roughly 60% of the main campaign needs to have been completed up to this point. Once this requirement is met and the DLC is installed, you will receive a mysterious package while onboard The Unreliable. The parcel, intended for a certain Alex Hawthorne, contains a severed limb and a cryptic message beckoning ‘Captain Hawthorne’ forth to the Gorgon Asteroid. The rocky planet is home to the exquisite Ambrose Manor and a reclusive inhabitant who contracts The Unreliable crew to locate an item of particular value on Gorgon. The catch? Gorgon is the site of a sprawling and now-defunct chemical research facility, once operated by Spacer’s Choice. At present the planet remains an infestation of mutated beings, unfortunate souls who were subjected to the gross abuses of corporate science gone awry, bearing its permanent scars. 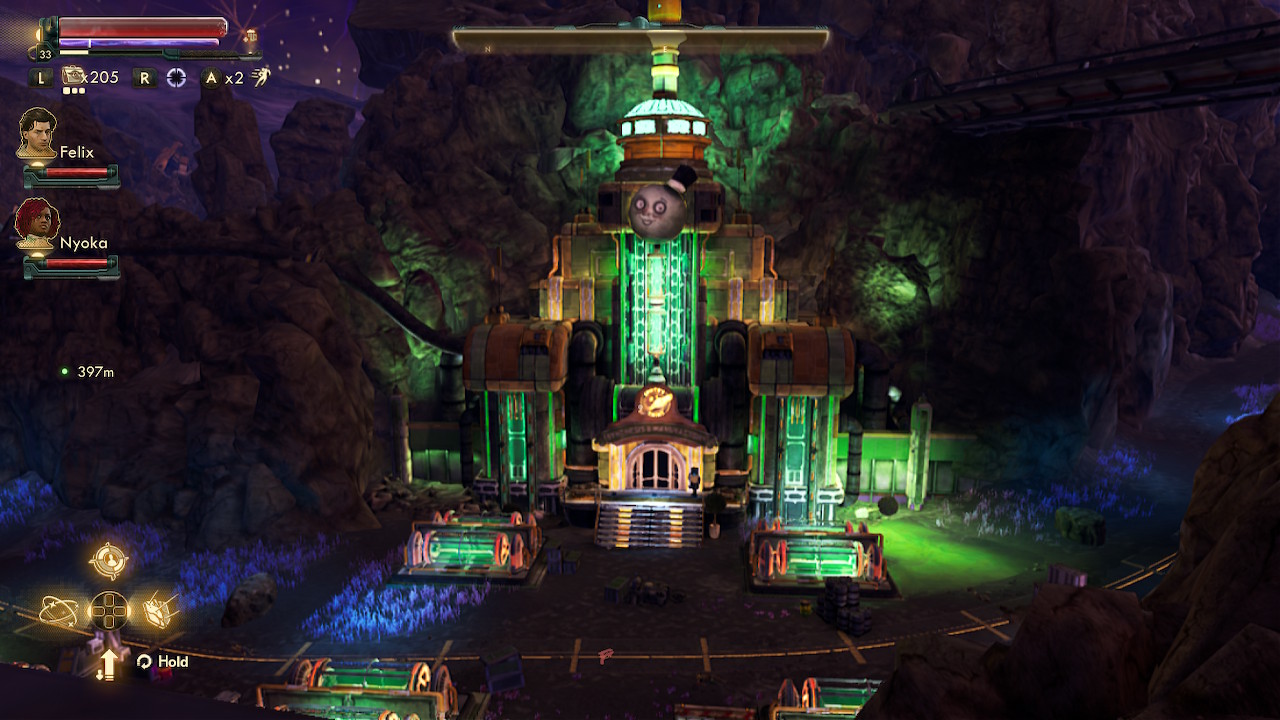 Both the plot and gameplay of Peril on Gorgon serve as extensions of the main campaign. Hence, for better or worse there is nothing here that is fundamentally different from The Outer Worlds other objectives insofar as the structure of its narrative plays out. Being DLC, there are of course new characters to meet, many involving further optional sidequests should the player wish to pursue them; new weapons to discover, tons of additional background information scattered about in journals and computer logs, and the like. However, the game’s primary attraction is unquestionably the massive brand new planet to explore. From its artificial atmospheric dome to its flora, the dark exterior of Gorgon glimmers in shades of blue and purple, its narrow, twisting ravines full of green toxic waste, monsters, and marauder encampments. 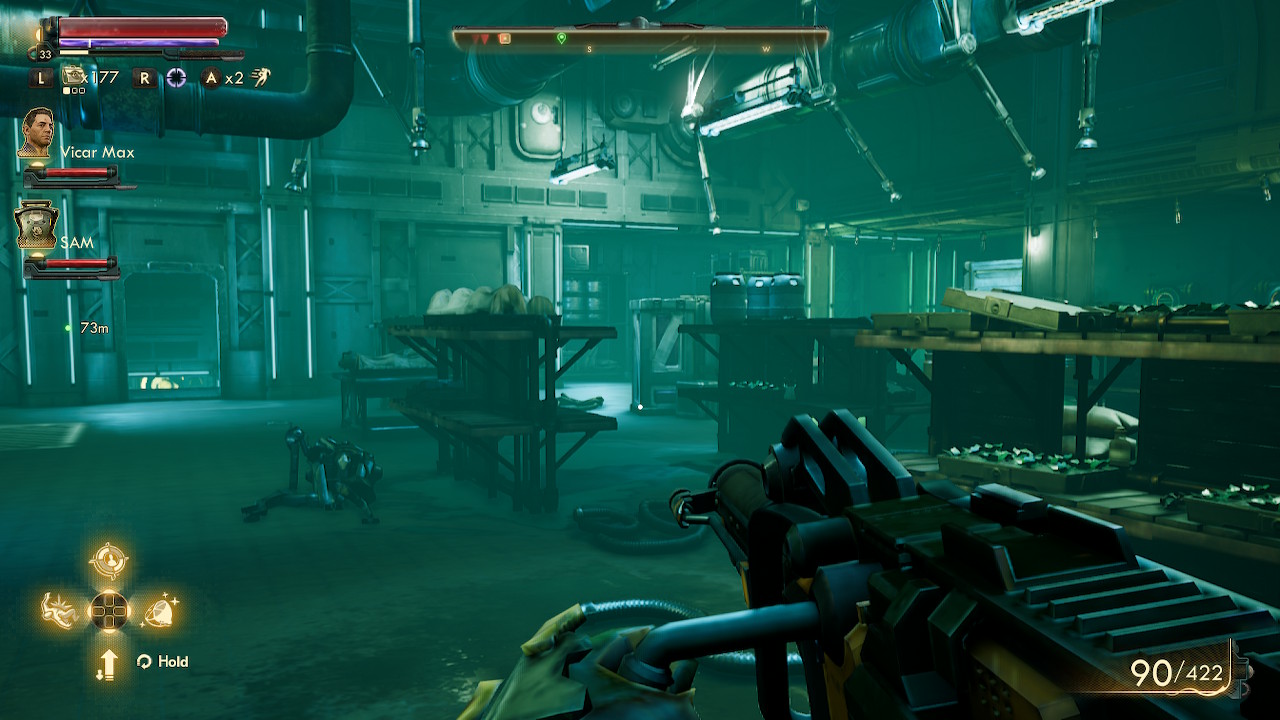 Whether it was navigating my way around Gorgon’s interweaving canyons, the deserted laboratories and caves that contain its secrets, or the last remaining semblance of Gorgon’s forgotten promise for civilization trapped within the Halcyon Solar System—the local saloon ran by SubLight called ‘The Sprat Shack’—there is a haunting, lonely mood that pervades every corner of the dreary asteroid. It was this eerie vibe, the tragic circumstances and the mystique surrounding the history of Gorgon, coupled with a compact storyline that contains but a handful of diversions, limiting my tendency to meander off from the central purpose to a minimum, that made Peril on Gorgon a real pleasure to finish. Offering completionists 10-15 hours of fresh content, it’s fun to test out new weaponry, unlock previously unavailable perks, and learn about the lives of those struggling to survive throughout Halcyon, but for me the cherry on top was the overall feeling that the peril on Gorgon created.

I upped the difficulty to ‘Hard’ to add a bit of ‘survivalist’ spice to what otherwise amounts to a fairly easy, mindless, run-and-gun RPG, and, along with everything else I’ve briefly highlighted, it turned my time on Gorgon into an experience that was as enjoyable and memorable as any other moment that I can recall from The Outer Worlds.

When it comes to the looks and sounds of Peril on Gorgon, I really have no major complaints. The Switch version may not win any awards for visuals but the rich palette of colors that dazzle in the heavens above Gorgon, the bleak rocky terrains, and the sumptuous symbols of human ingenuity sprinkled across its surface successfully achieve any aims that the developer had to create a wondrous, desolate world for Nintendo Switch players to fully immerse themselves within. Although enemy movements still seem a bit choppy at times, and the game frequently ‘freezes’ for a few seconds while auto-saving, gone are the days of fourteen months ago when all discussions of The Outer Worlds on the Switch had to be prefaced with remarks about its piss-poor performance. Given that, Peril on Gorgon still looks pretty atrocious in handheld mode. Even so, the ability to play an RPG of this caliber on the go, despite significantly downgraded textures, remains a tradeoff that I’m readily willing to accept. 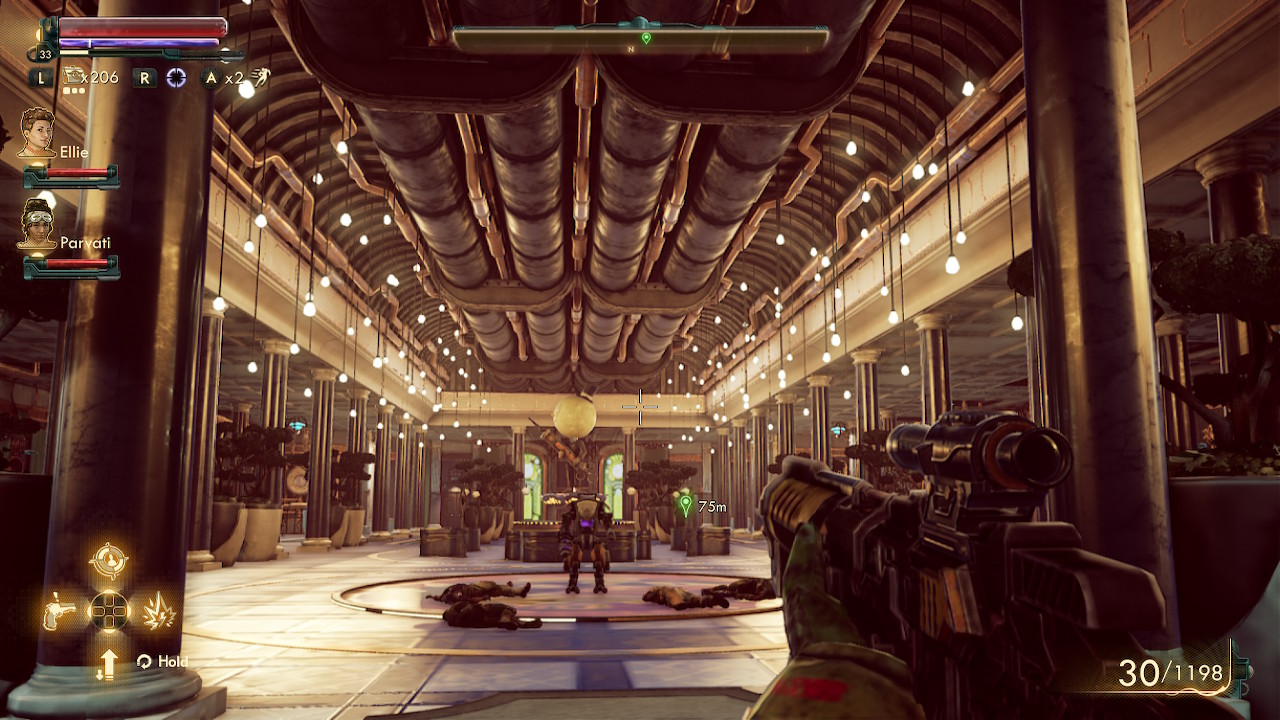 When it comes to Peril on Gorgon’s audio, the voice-acting is as consistently exceptional as ever, complimenting its well-written, choice-based dialogue no less impressive than the base game, which I specifically praised as one of The Outer World’s high points in my prior review. The soundtrack too delivers, particularly the masterful, elegant song that plays while traversing Gorgon’s chasms, the appropriately entitled ‘Surface of the Gorgon.’ It wholly captures the creepiness and intrigue permeating the planet’s atmosphere with an ambient chord progression that manages to somehow be, like so much of The Outer World’s tracklist, both soothing and restless.

It didn’t take long for me to fully reconnect with my old crew of misfits—Parvatti, Felix, Ellie, and the rest of that endearing, unlikely alliance—all of whom made my ship, The Unreliable, feel something akin to a spacefaring home. As such, I must say, I felt utterly gratified to be back in the cockpit. Peril of Gorgon quickly engrossed me with same otherworldly magic that catapulted The Outer Worlds into 2019 Game of the Year conversations and made my original foray into the first-person shooter/RPG back in 2020 such a pleasant time. If you similarly found yourself taken in by The Outer World’s peculiar sights, personalities, its diverse and exciting store of munitions, the abundance of items and upgrades to be procured, and all the other finer details that have helped Obsidian Entertainment sell over 4 million copies(!) in well under two years, and you want more of the same, then Peril of Gorgon is totally worth it.

Sure, it may be over with too soon for some, and there is a sense in which the DLC feels like it could have simply been included in the base game from the start. Still, I’m honestly just happy knowing that it’s not the last score us Switch owners will have to settle in Halcyon. 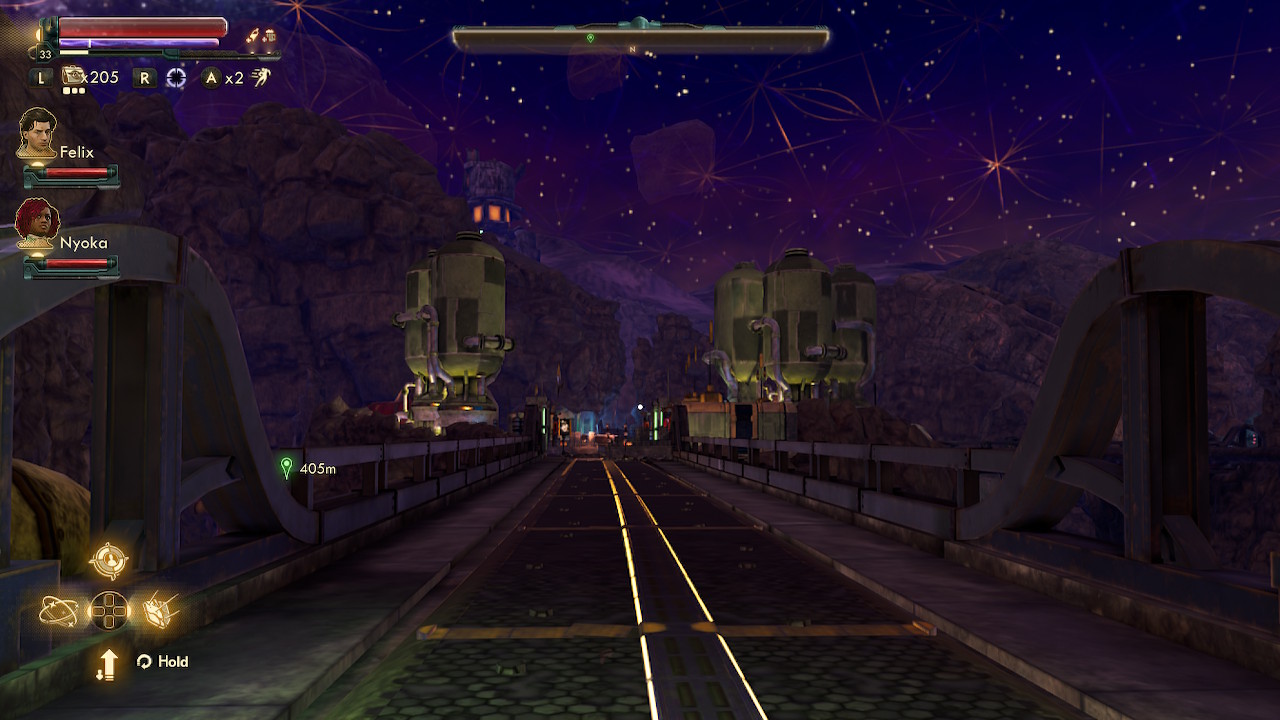