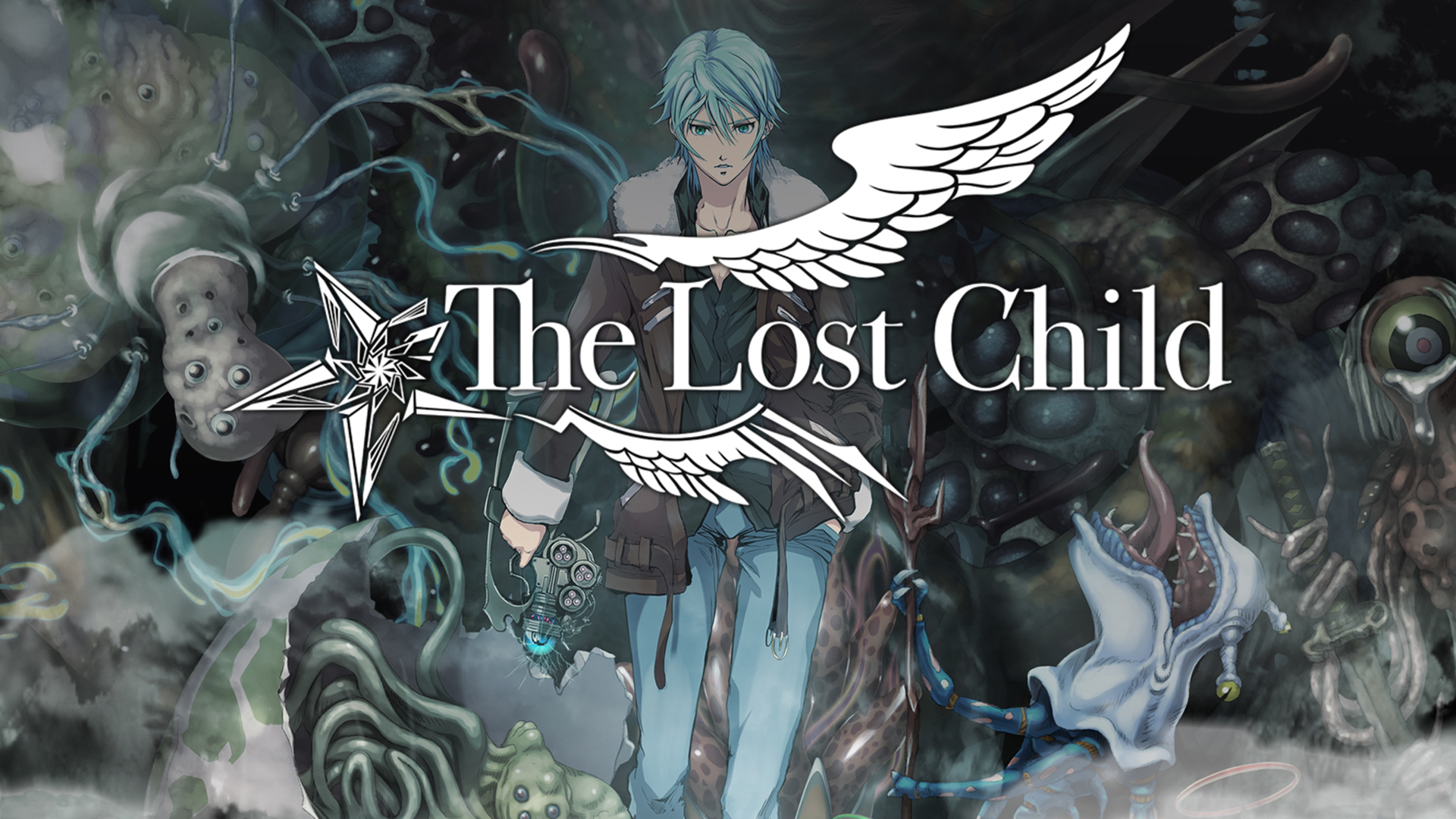 Ever wondered what it’s like to be a small-time journalist wrapped up in a celestial brawl, capturing demonic creatures with a device more or less forced on you for no reason that somehow makes you the “Chosen One” because a lady who apparently doubles as an angel told you so?

No? Yeah, I don’t think anyone asked for such a thing, but here it is.

As you can probably tell, The Lost Child is an odd game. The most recent RPG published by NIS America sets you into the world of a green-eared occult journalist in a modern-ish Japan. Think Parasite Eve but not in New York. Nevertheless, The Lost Child wastes no time getting you, Hayato, involved in some weird stuff from the get-go. In a nutshell, Heaven and Hell are in the midst of fighting each other, but are doing so on Earth. You are saved from a potential freak accident by a mysterious lady, who leaves a case with you because…just because.

Upon investigation, and from the reassurance of Lua, an angel determined to help you with your new task, you discover that the mysterious device recovered from within the case is the key to you (the Chosen One) saving the world. Throw in the cameos of some tentacled monsters, including Cthulhu itself, and you more or less have the summation of the game’s story.

Here’s the thing. I can appreciate an out-there approach to a plot, and enjoy experiencing the supernatural as much as the next guy. Alas, The Lost Child is not the type of game that will be a memorable or enjoyable ride from a story standpoint. The characters are not fleshed out and nothing really makes a whole lot of sense. Some might make the excuse that a surreal adventure like this should always leave the person guessing about what is going on, and I agree to an extent. However, the execution must be sound, otherwise your entire plot ends up just being a slog to get through.

Let’s talk about Parasite Eve again. While two totally different games mechanically, they share a lot of similarities thematically. Both are investigative pieces that take place in modern cities. One protagonist is a journalist while the other is a cop very much in the detective role. Whereas Parasite Eve has a way of gripping you from start to finish through its worldbuilding, interesting characters, and incredibly unsettling atmosphere, The Lost Child seems like a children’s bedtime story in comparison. Unless you are taking the satirical approach (Cthulhu Saves the World is a fantastic game, by the way), any game with Lovecraftian inspiration should at least be able to evoke some level of unease in the player. The Lost Child fails to be interesting in its presentation of the world or the characters inhabiting it.

Luckily, there are some things I was able to enjoy after looking past the underwhelming story. The majority of your time with The Lost Child will be spent delving into dungeons from a first-person perspective. Many people have compared it to a series like Shin Megami Tensei, but having little experience with any modern dungeon crawlers, I will leave that for you to investigate on your own. All I can say is that it plays very much like older first-person dungeon crawlers, such as Shining in the Darkness and Warriors of the Eternal Sun (sorry for being a geezer, but those are the only legitimate comparisons I can make), complete with traps, treasure, puzzles, and the occasional enemy encounter (more on those later).

Simply put, it doesn’t throw much at you in terms of complexity when it comes to the dungeon crawling itself, but what it does offer I think it does well. You fill out a map as you go, which serves as a playground for the game’s auto-pathing feature should you need to do some backtracking and don’t want to do the legwork all over again. Additionally, items exist that allow you to instantly travel to anywhere you have uncovered on a given map, though it does not extend to all levels of that particular dungeon.

All in all, I’d say that the dungeon diving in The Lost Child is adequate for someone like myself who hasn’t played this type of game in ages. Veterans to the sub-genre may yearn for more though, depending on if these kinds of games have evolved beyond the features I have outlined earlier.

Combat is of the turn-based flavor, and plays out in a first-person fashion, most often initiated via random encounters. This setup is great for those moments when you want to grind out experience or money, but makes the dungeons themselves feel a little flat. I don’t know, I just feel like part of the first-person dungeon delving experience is not knowing what horrors might await you in the next corridor. That sense of dread is lost when you just get into a random battle every few steps rather than physically seeing them on the map.

Either way, the combat itself is good despite being pretty easy. I played the game through normal, and had little to no hiccups whatsoever. If I had it to do over again, I would have probably opted into the harder difficulty. I can only imagine the easy setting being a literal faceroll, considering the absence of heavy resistance in normal mode.

Back to the combat itself, turns are executed in order based on each unit’s speed statistic. There are elemental strengths and weaknesses to consider, but for the most part I’d say that they are unnecessary for the majority of an easy or normal mode playthrough, save some of the bosses. Additionally, most of your party members are able to learn from a pretty hefty pool of abilities during the course of combat. Think of this process as sparking abilities in the SaGa series. You perform commands with a chance to learn a completely new one.

It is worth noting that the actual command you queued will not be executed should that particular unit spark a new ability, likely leading to frustration to those either not familiar with the system or if those moments when you’re really down to the wire of a more difficult encounter. I, for one, enjoyed the combat system in The Lost Child as a whole, and can’t very well be upset by the lack of genuine challenge on normal when there are other options available to tickle that fancy.

The main protagonist, Hayato, has one more combative trick up his sleeve. As the Chosen One and the wielder of the Gangour, he has the ability to capture both angels and demons alike. Capturing such things in The Lost Child is simply a matter of using a special ability in combat. While there is no cooldown attached to its use, you will inflict much more damage if you time your catches with its respective gauge that fills as you perform other actions in combat. Actually capturing a creature boils down to inflicting the killing blow on the enemy, so the ability’s damage is an important thing to consider.

Once captured, you can befriend up to three creatures to aid you in combat, with several more available in a reserve of sorts should you need them. Each unit has their own properties and ability pools, much like you would see in any Pokemon game. You also have the ability to swap around abilities from creature to creature (for a price), further increasing the customization potential to your party. The system in its entirety is pretty sound, but I do have a few issues with it that ultimately leave me wanting something more out of it, which I will get into in a bit.

So, The Lost Child doesn’t necessarily look bad, but it does have a cheap, sort of half-baked feel to it. I don’t know if it’s due to the hyper-stylized character and enemy portraits that are offset by the lackluster dungeon visuals, or something else entirely. Something is just off, and unfortunately, this is one of the main reasons that the whole monster collecting aspect didn’t really appeal to me.

It’s an understandable argument that some may consider Pokemon to be scraping the bottom of the barrel in terms of their more modern enemy designs, considering there are hundreds of them at this point. Even still, the designers have a way of making them mostly appealing, regardless of whether they might as well be a toaster or lounge chair at this point. The Lost Child fails to draw you in with its enemy design, therefore making the collect-a-thon task more of a box-checking endeavor rather than a truly enjoyable one. Your mileage may vary, but the game simply failed to grasp me on an artistic level.

The looting and crafting systems did manage to grab my attention, however. You can find stuff from treasure boxes placed around dungeons as well as various vendor trash and sundries from enemies. Later on, things get a bit more interesting when appraisable drops come into play. These are very much the same as unidentified items you would find in a Diablo game, complete with random modifiers and waiting to be curated by a weird old man.

These kinds of drops become commonplace quickly, and give you access to the most powerful equipment in the game. I wouldn’t worry about RNG much, as the drop rate is pretty generous (not to mention the ease of difficulty in the game already). When you find exceptional pieces that you want to hold on to for a while, you can upgrade them by sacrificing other pieces of equipment. That sick golf club you just discovered that can strike three times in one turn can be made exponentially stronger with this system.

Through the process, you will keep the existing modifiers on that gear, but have an ever-decreasing chance to add bonuses to its overall power level with each upgrade. Although failures are a real thing, you never have to worry about losing that good piece of gear should it happen. Rather, the materials and money used as the upgrade’s catalyst will disappear. This whole system makes the dungeon diving experience that much more interesting and entertaining in the long term.

The Lost Child has the ability to take you on a roller coaster ride, complete with highs and lows, when glossing over the structure and execution of its systems. On one hand, it does well with its dungeon diving system, though possibly playing it safe when viewed by those who eat these kinds of games for breakfast. The combat itself is engaging enough, backed by a decent crafting and loot progression system.

Building up your demonic companions is fun although it leaves a little to be desired when compared to its obvious source of inspiration. The story and its characters are not great and will be a definite point of contention to those who count on an engaging story experience. Plus, it lacks the appealing aesthetic and sound design that one may expect from an older styled RPG, especially at its price point.

There apparently is a massive post-game dungeon that will really test your mettle, but that does nothing for those just wanting to experience the base game. Setting that aside, the game is a bit on the short side for $50USD. Therefore, I feel like it is in the best interest on a consumer-wide level to rate The Lost Child appropriately by weighing its pros, cons, and price structure despite the potential for some people to get lost in its systems for hours on end.