The Legend of Tianding Review (Switch) 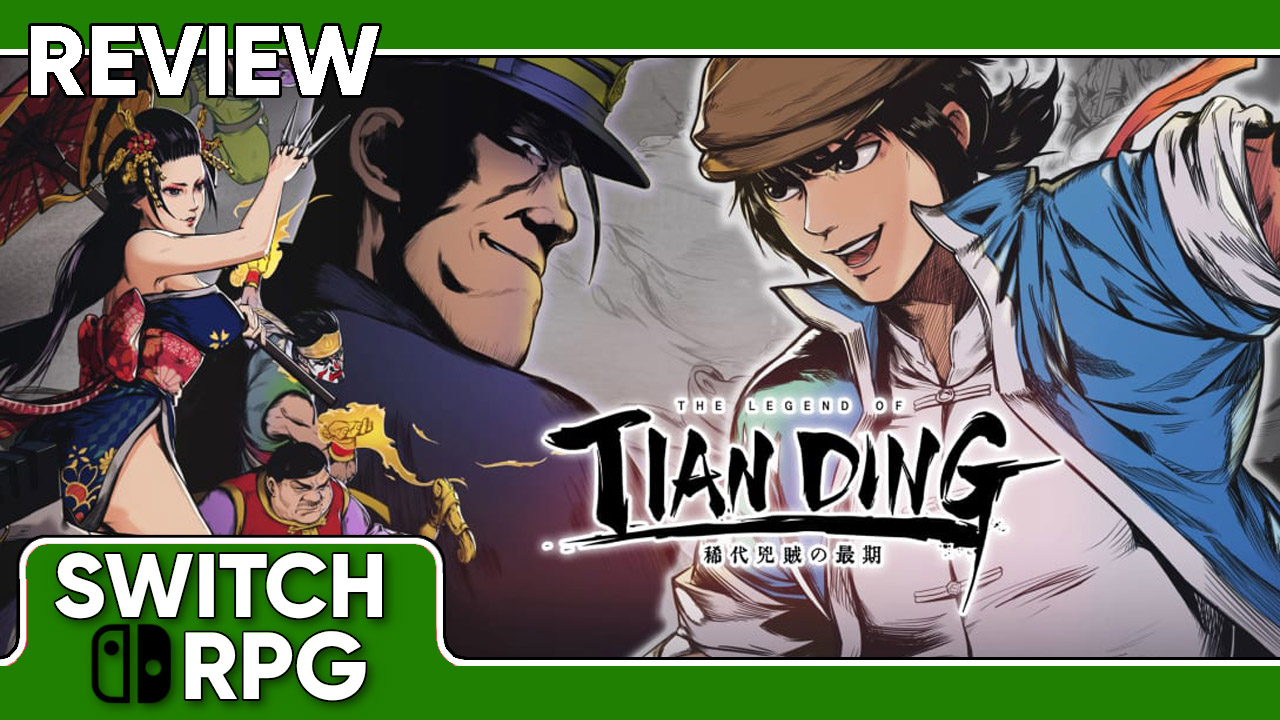 In 2021, over 300 RPGs were released on the Nintendo Switch, and that’s only counting the NA region and games specifically labeled on the eShop as RPGs. Naturally, trying to experience each and everything the space has to offer is nothing but a fool’s errand – even if a portion of that figure was deemed as forgettable experiences at best, there are simply not enough hours in the day to play even the RPGs we actively want to.

For me, one of many examples of this was with The Legend of Tianding – a beat’em up RPG that was released over two months ago that I’ve only recently been able to play. I enjoy beat’em ups, especially those of the RPG variety, and what I discovered with The Legend of Tianding was both unexpected and exciting. Not only does this game draw from classic arcade brawlers and beat’em up RPGs, such as my beloved Kunio-kun series, it also features explorative elements akin to Metroidvania titles, all while wrapping the package in a pleasing comic-esque aesthetic and refreshing 1900’s Taiwanese setting. 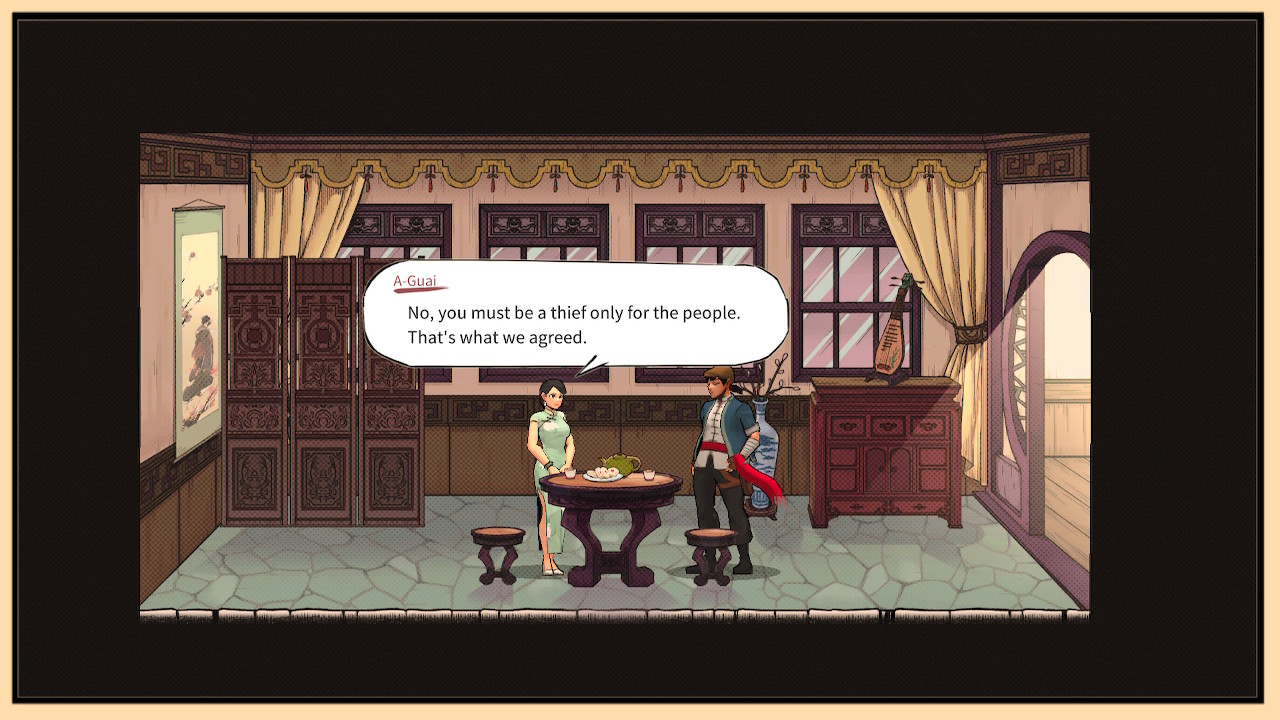 The Legend of Tianding is loosely based on the exploits of the Taiwanese heroic outlaw of the same name, set in an early 1900’s Taipei City that is under Japanese rule. In the game, Tianding is characterized as a young, charismatic “Robin Hood” that steals from the rich and gives it to the poor. His combat prowess is second to none, leading those in power to fear the elusive vigilante even more.

However, tension between the Japanese and Taiwanese people are at a boiling point, which has led both sides in the pursuit of a legendary treasure that could turn the tide of conflict or, in the wrong hands, make things even worse. Tianding’s objectives are two-fold: help those in need, and find the fabled treasure before it falls into the wrong hands.

While the setting and theme of The Legend of Tianding is certainly refreshing, the narrative itself is relatively no-frills and straightforward. There are a couple twists here and there, as well as a few different endings to help with replayability, but this is still very much the type of game that emphasizes gameplay over storytelling. From a pure brawler perspective, however, The Legend of Tianding does more than enough to keep things interesting. 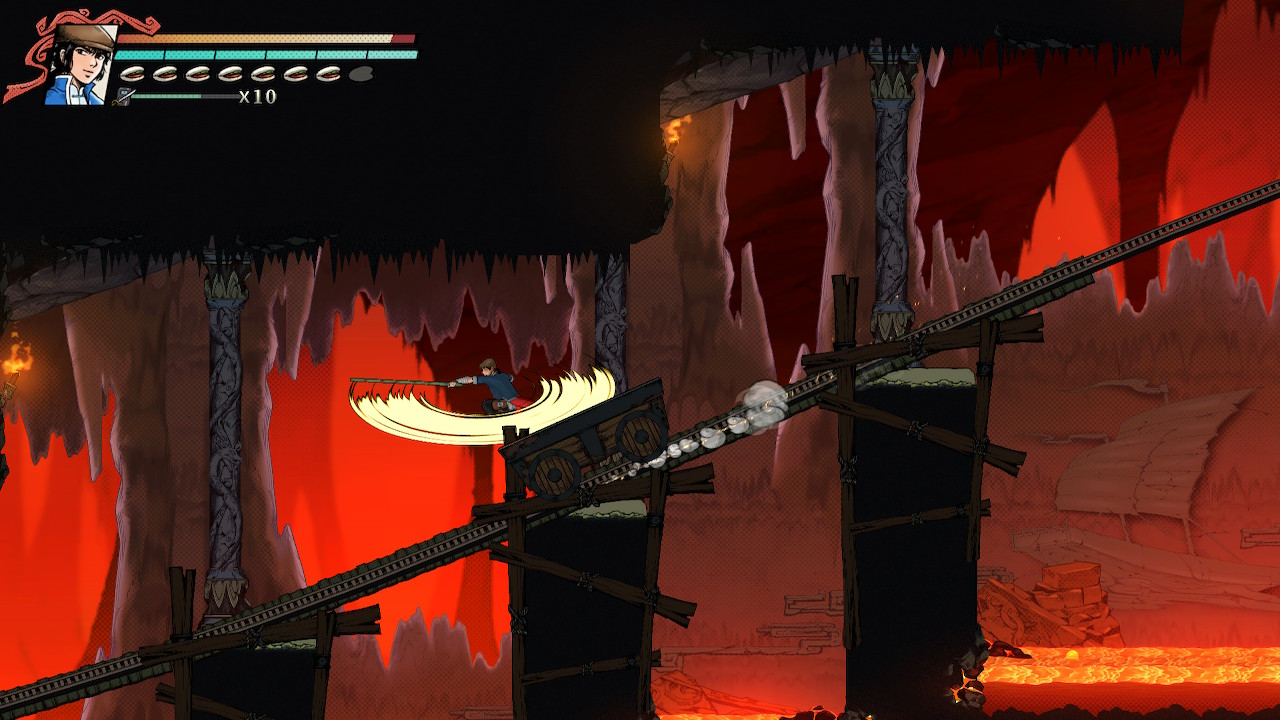 At its core, The Legend of Tianding is a sidescrolling beat’em up RPG that features some platforming and Metroidvania mechanics along the way. Rather than taking place in one massive map, the game instead segments the adventure over a handful of smaller (but still quite large) stages. Areas that Tianding will explore include the Dadaocheng region of Taipei City, the sprawling sewers below, a military complex, a massive train on the go, and more. Once any particular stage has been completed, the player can go back to it as many times as they’d like to gather money and find missing treasures.

In this way, The Legend of Tianding is similar to a Metroidvania where only after acquiring certain powerups can the player reach specific areas. Over time, mechanics are introduced like the double and triple jump, wall slide, and makeshift paraglider that open up new sections of each stage to explore, though the depth of these discoveries typically only lead to new treasures rather than opening up a whole new region or zone.

Tianding will face many opponents across these stages, with full-on levels littered with minions that inevitably lead to a showdown with the chapter’s boss. As a master of arms and martial arts, Tianding can use a combination of weapon strikes and special abilities to create combos and dispatch his foes. But he isn’t limited to his own, trusty tanto – Tianding can use his red sash to disarm and steal all sorts of weaponry from his weakened foes. 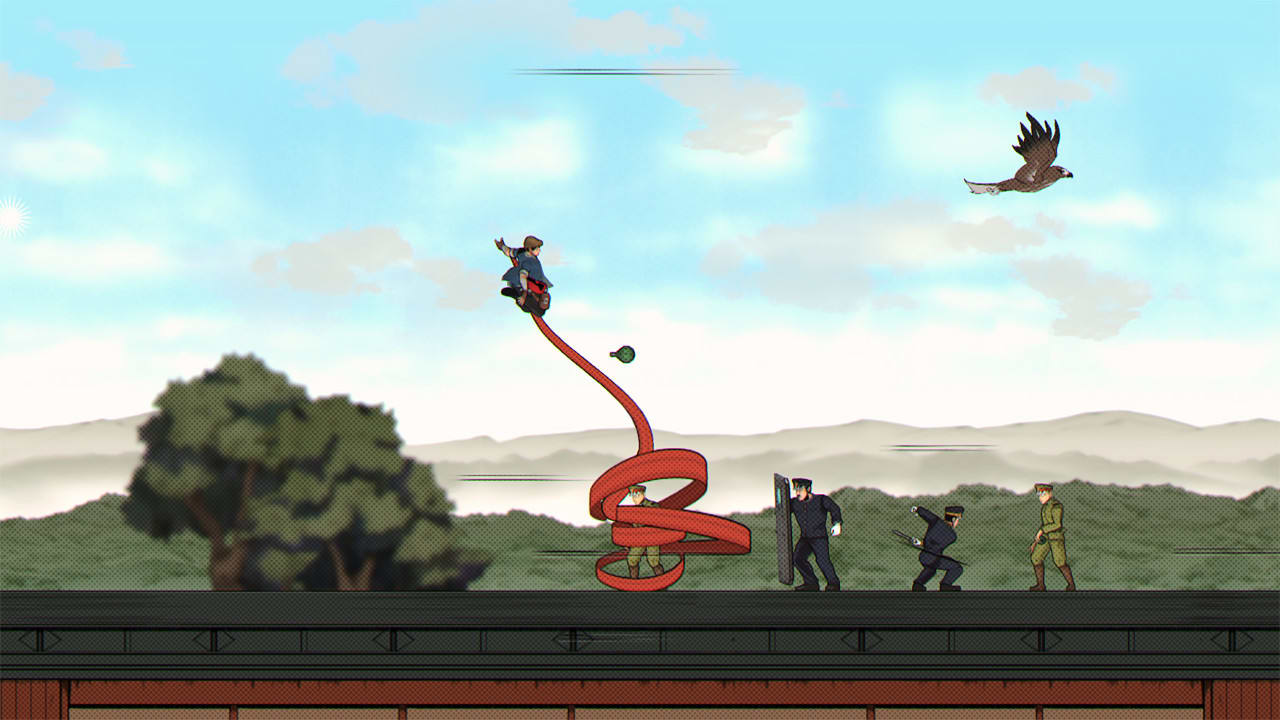 When this happens, the opponent’s weapon replaces Tianding’s tanto for a certain number of strikes, or until the player discards it manually. And these weapons aren’t just for show – their strengths, weaknesses, range, and mechanics are all unique and suit certain situations differently. Sometimes, the sweeping power of the axe or bo staff is just what the doctor ordered, other times it might be explosives or the armor-piercing rifle. Regardless, the end result is a refreshing take on the traditional subweapon system.

Perhaps Tianding’s greatest offense, however, is his defense. All sorts of traps and incoming attacks can be completely avoided if evasive maneuvers are timed properly. Furthermore, performing a perfectly timed dodge will eventually result in a temporary shadow clone that will mirror Tianding’s attacks for a short time.

It’s a good thing that Tianding has a vast toolkit at his disposal, as most of the boss fights are no joke. While The Legend of Tianding features a casual and standard difficulty that can be changed at any time, the latter choice demands the player to pull out all stops in order to best some of the bosses. It’s extremely unlikely that players will one-shot them on the first go, but after becoming comfortable with each of their mechanics, it is certainly doable. The bosses ride that “tough, but fair” line with laser precision. The final boss even has an additional phase for those playing on the hardest difficulty, which is a nice touch. 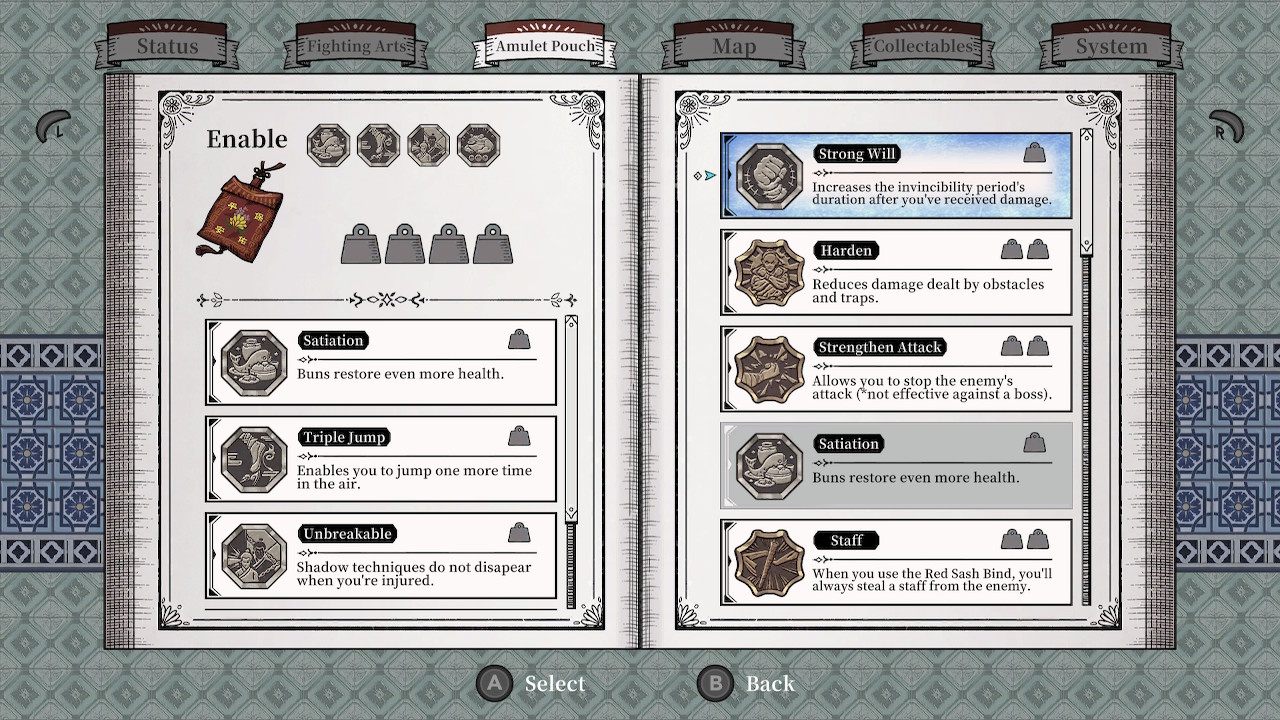 The Legend of Tianding is very light on traditional RPG mechanics, but there are some here. In addition to the aforementioned multiple endings, players can upgrade Tianding’s base tanto multiple times over the course of the adventure with money dropped from enemies (in a Kunio-kun esque fashion, which is awesome). Health and stamina – the latter of which fuels certain special abilities – are automatically increased periodically throughout the journey, and meat buns serve as a consumable that can replenish health in between checkpoints and during boss fights.

The Legend of Tianding also provides perks in the form of talismans and collectables, with the former essentially being equipment that can be freely configured either in town or at any checkpoint. Collectables are acquired through all facets of the game, but are also tied to one of its weakest spots: poor citizens. In town, Tianding will come across countless beggars that can be given money in exchange for seemingly random collectables, many of which the player may or may not find useful depending on their playstyle.

For example, one collectible may increase the damage or charges of axes, but that won’t affect the player whatsoever if they don’t like using axes to begin with. Given the game’s clear influence from Kunio-kun RPGs where enemies “barf” money upon defeat, I would have preferred a robust shop system in the same vein that provided a consistent exchange for currency rather than relying on beggars and sheer luck. As is, it’s not overwhelmingly problematic, but more of a letdown than anything else.

Overall, The Legend of Tianding’s gameplay, particularly combat, is exceptional, but might even play second fiddle to this next category… 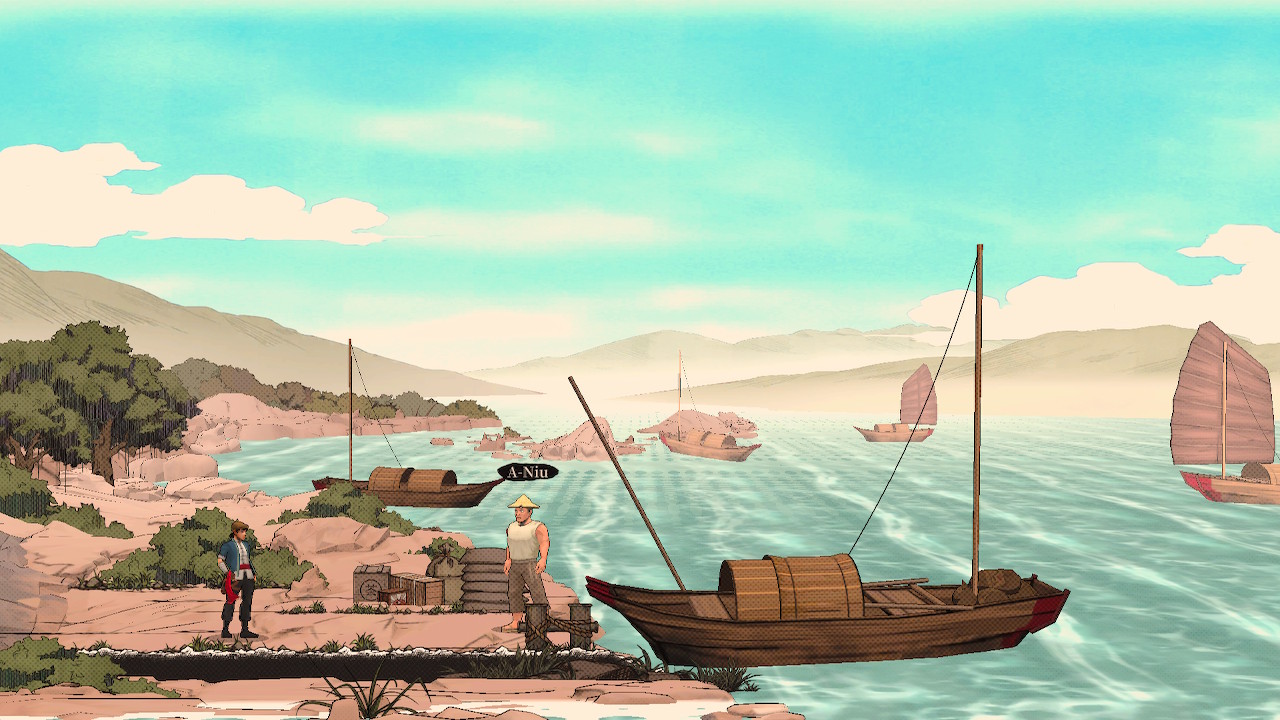 To put it simply, The Legend of Tianding is gorgeous. An early 19th century take on Dadaocheng within the greater Taipei City is just a sight to behold. Its streets and alleyways are brought to life through impressive parallax scrolling and each individual stage has its own style and theme that, while tied into the core design, does its own thing to keep it fresh. All of this is overlaid with Ben Day dots that hearken back to old school comic books and media.

But the comic book presentation doesn’t stop there, The Legend of Tianding utilizes animated comic frames at numerous key points in the adventure in order to better emphasize the gravity and emotion behind certain events. At the conclusion of each stage – or chapter, as referred to in-game – players are once again treated to a nostalgia trip in the form of comic-esque radio segments that summarize the crucial endpoints of each moment (visually and audibly) in dramatic fashion.

A relatively solid framerate and consistent performance culminates the whole presentation into something truly special, and while the music portion isn’t anything to write home about, it does still fit the thematic mold like a glove. 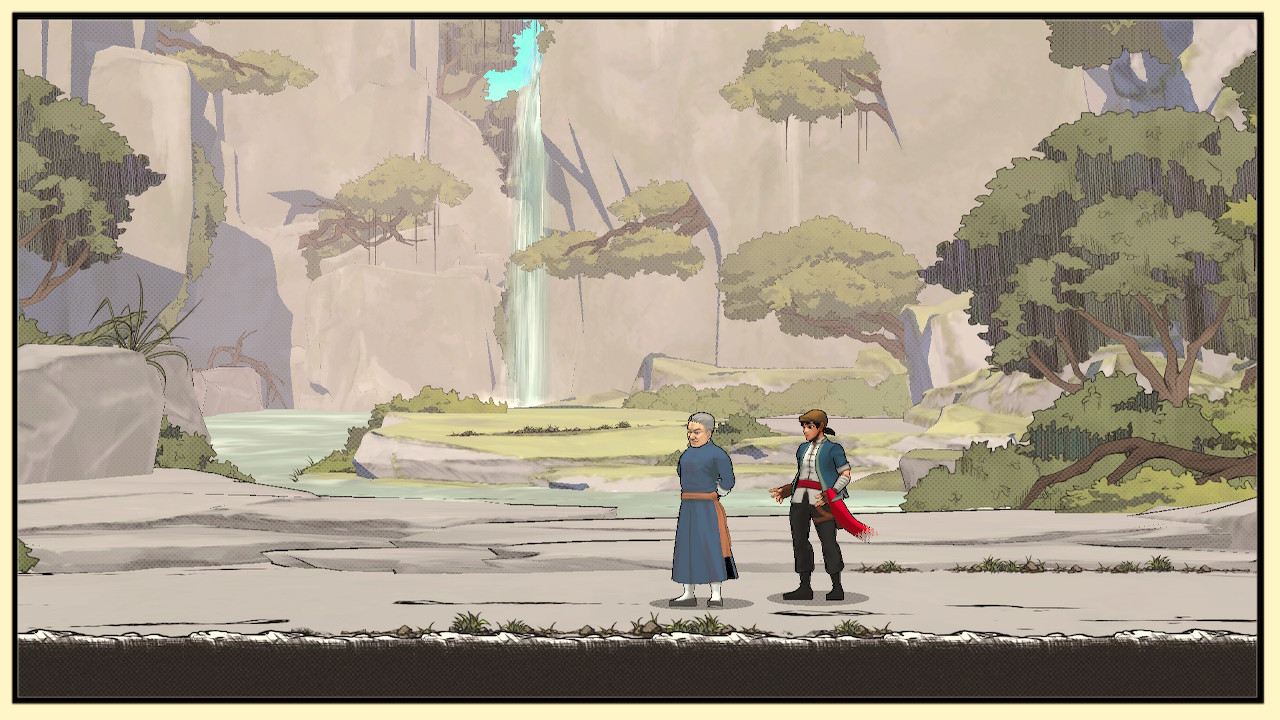 If I had played The Legend of Tianding before 2022 began, it would have been in my top Switch RPGs of the year. While it may lack the same kind of expected replayability other beat’em ups have through a large roster of playable characters, Tianding kind of mimics the feeling of multiple unique players in one through his vast array of weaponry. The story is fine, if a bit predictable, but was likely only ever meant to supplement the true stars of the show – that being combat and the presentation.

Additionally, there are some completionist goals, such as fulfilling all side quests, grabbing all the treasures, and discovering all endings that have the potential to keep players invested for some time. Blasting straight through a single run may only demand a half dozen hours or so, but that is fairly typical for games of this flavor and not taking into consideration the aforementioned completionist content. Furthermore, there is even a full-on card minigame in The Legend of Tianding that I didn’t even cover simply due to my dislike for card games and general, and the fact that I suck at it. But it’s there, and likely to be a neat little side activity for those that enjoy such content in games.

If you are a fan of beat’em ups with a splash of Metroidvania and RPG mechanics thrown in – one that has a very unique presentation and setting – then The Legend of Tianding might need to be your next pickup.

Tags: The Legend of Tianding