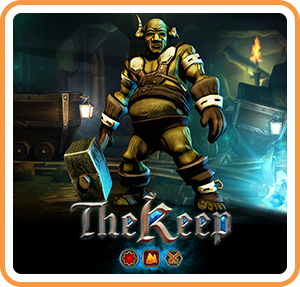 I’m all for a good mindless dungeon crawler, except that today’s topic, The Keep, is not mindless by any stretch of the imagination. As a result, it turns out that I also enjoy a mindfully engaging dungeon crawler. 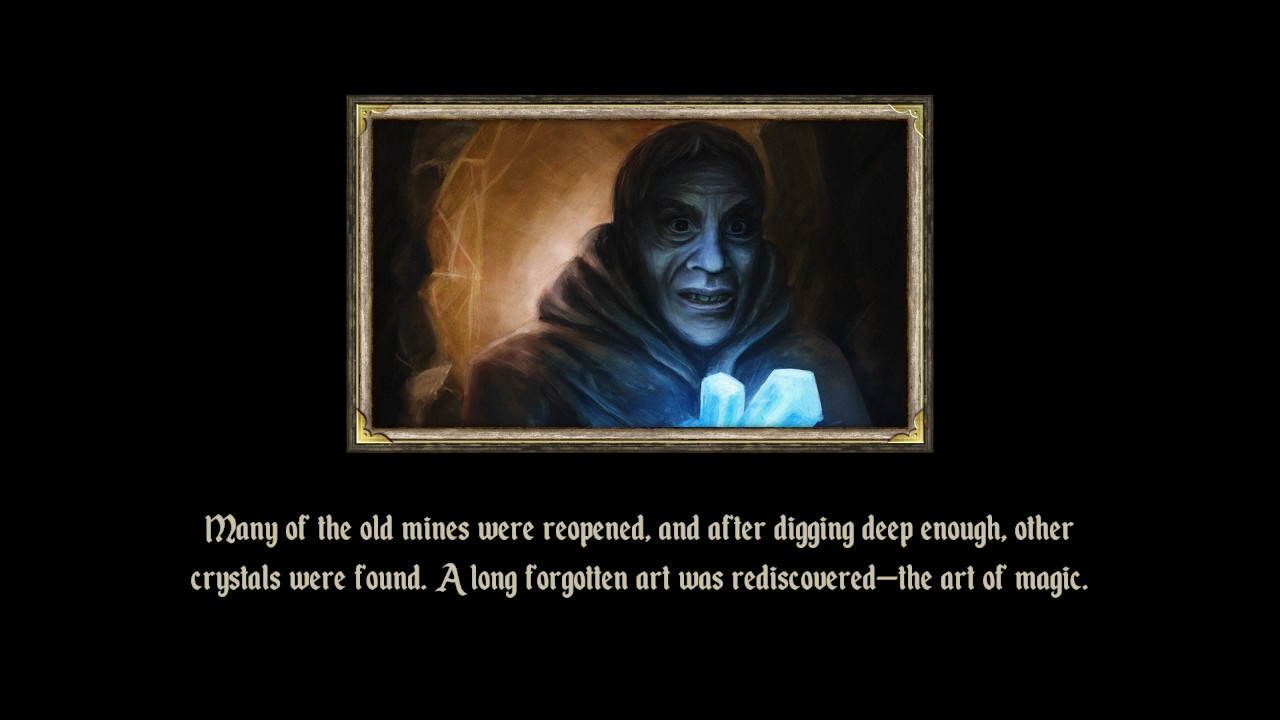 The nearby village of Tallia has been pestered by an evil Wizard named Watrys. The ruling council idly sits by and does nothing as Watrys kidnaps children and slaughters any who enter The Keep. It is up to you, young hero, to extinguish the evil Watrys, and whatever else you find in The Keep. The Keep progresses chapter by chapter with each having a clear start and end, and a total of 10 chapters await you. Between each of these chapters, the story will progress as you are presented with cutscenes and story pieces the deeper you go into The Keep. What drove Watrys to his evil deeds? What is going on in The Keep? It is up to you to find the answer to these questions. Since the story progresses as chapters, you are continually fed with new story pieces, each unveiling a little bit more of the mystery of The Keep and how Watrys became well…. Watrys.

The Keep’s movement system is grid based. Meaning you are moving 1 square in the direction of your choosing every time you move the stick. This may feel a bit clunky for some but it feels right at home for me and did not detract from the whole experience. You can also strafe for sideways movement – making some of the puzzles and trap movements much easier. 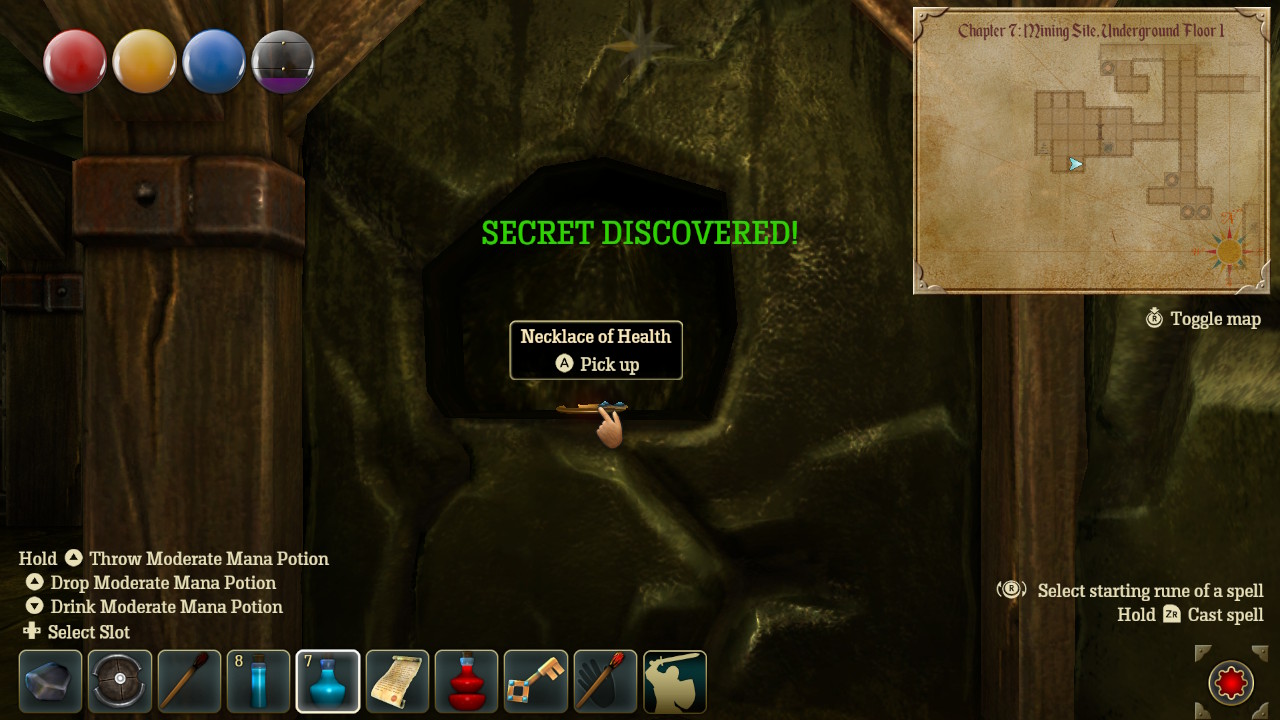 The Keep is full of puzzles. In fact, I was sort of surprised at the number of puzzles presented to you. I originally thought it to be more of a battle and exploration game than a puzzle game, when in reality it’s all of the above. There are a ton of puzzles that need to be solved here and you might need to put on your thinking cap for more than a few of them. Many hours were spent running back and forth observing the results of toggling levers and/or pressing buttons. The puzzles are masterfully designed in most cases. They leave little to no hints on how to solve them, making their completion feel quite rewarding. It took a while for me to get into “The Keep mindset” of puzzling, but once I did I found myself rather enjoying the dungeon crawl.

The Keep evolves though, and throughout the entirety of the game, it strives to stay fresh by presenting the player with new and different challenges. As you progress, The Keep presents you with different enemies, traps, puzzles, secrets, and rewards. However, there is a minor issue with the “reusing” of enemies in the later levels, so you’ll find souped-up versions of dwarfs that you battled a few levels back. While they might look slightly different, they are more or less the the same. Overall, I found each level to be different enough to keep things exciting. 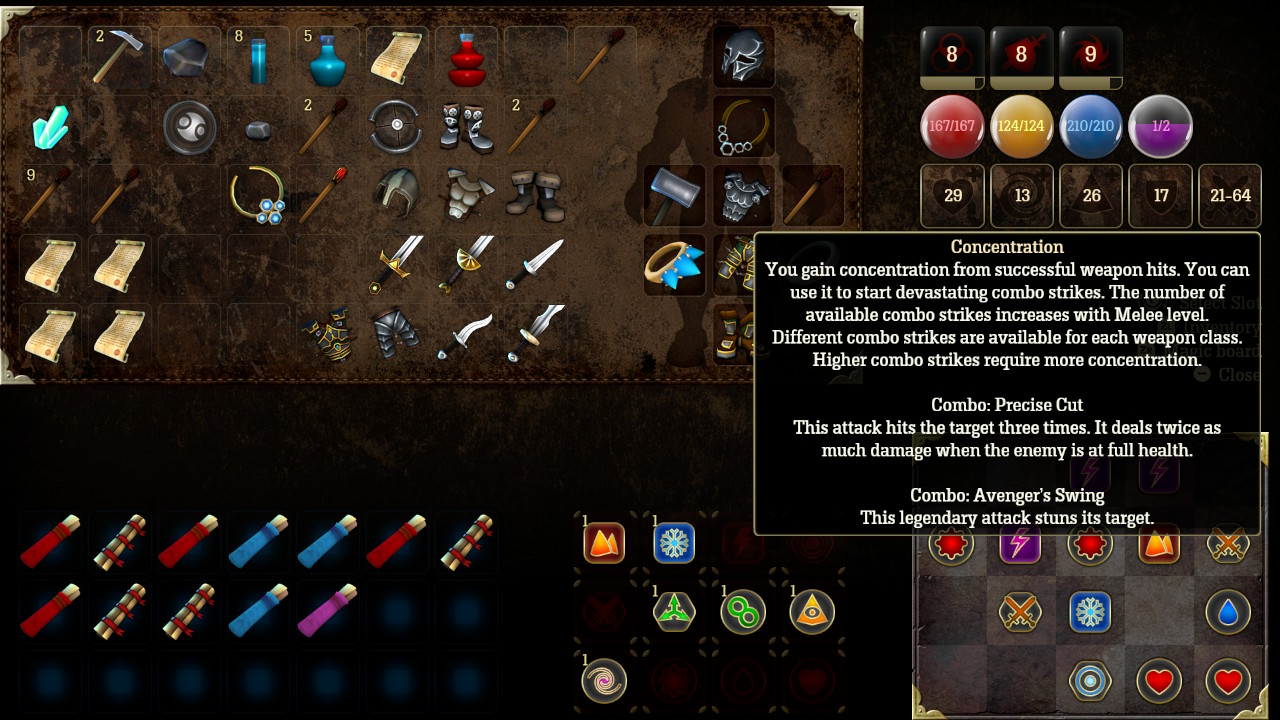 The Keep comes with a uniquely painful battle system. In order to melee attack enemies, you must “swipe” with your right joystick after hitting the attack button. Even though The Keep was re-designed for the Nintendo Switch it is clearly evident that it still is rooted in its Nintendo DS stylus-wiggling past. Battles often devolve into who can run the farthest without getting cornered due to the real-time combat mechanics and limited stamina pool.

To make the whole melee system a little better you can gain concentration points from successfully hitting enemies. You can then use these concentration points for melee combo strikes. These combos vary depending on the weapon class, so a dagger will not have the same combo attacks as a sword or hammer. For example, a sword combo called Downward Slash will strike enemies and increase critical hit chance by 50%. The Keep’s DS roots show through here once again as each combo attack will have you “trace” a pre-defined pattern on the screen with the right stick. This feels a tad awkward but the effects from unleashing these attacks are highly useful.

I’m not a big fan of the melee system. As a good friend of mine used to say, it “sucks eggs”. Battles take place in real-time, so making me select attack, and swiping my joystick repeatedly to eviscerate enemies is not a whole lot of fun and gets stale really quick. Thankfully, The Keep’s magical system is something that should be revered and hoisted up high. 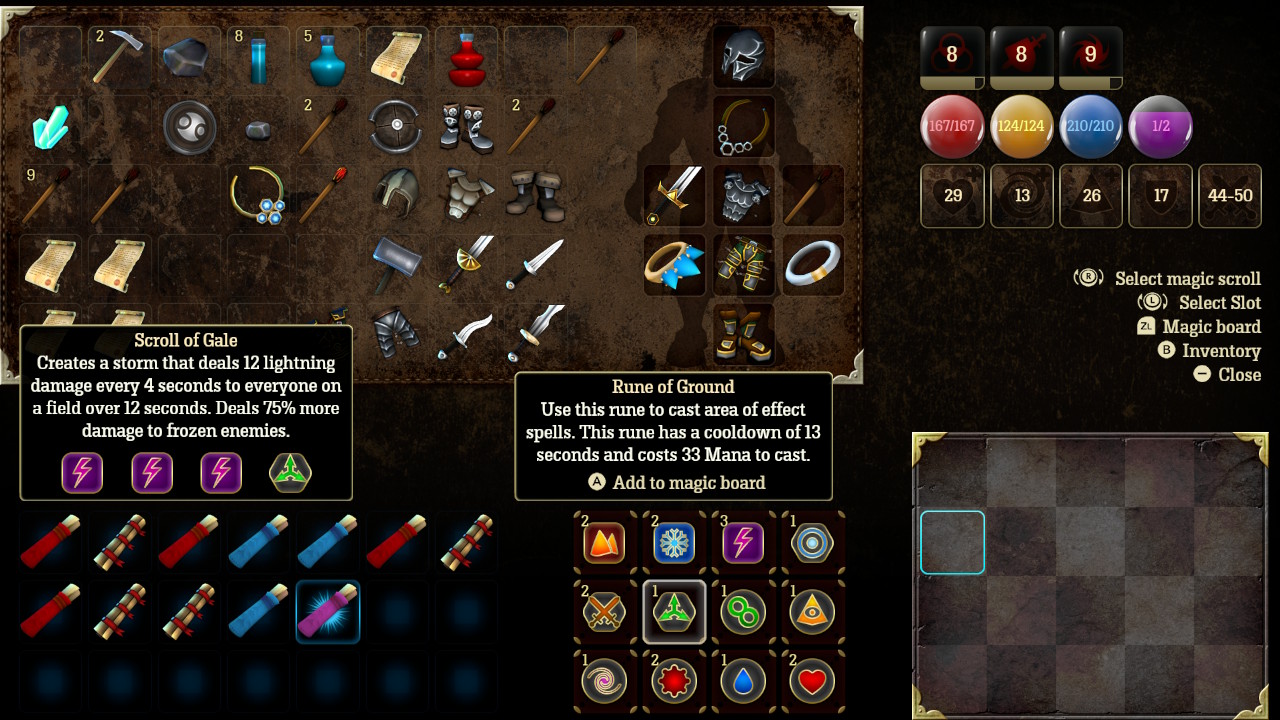 The Keep’s magical system is a magnificent invention – it’s like Words With Friends but with magical spells and actual gameplay! The magic system is compromised of a 5 by 4 grid and a fairly large assortment of magical runes. It is up to you to place these runes on the grid to cast magical spells by connecting the runes together. Either by blindly guessing or finding magical scrolls you will discover the magical patterns to the spells. If you look closely enough, The Keep’s Magic system is still reliant on the likely Nintendo DS “swiping” mechanic to cast spells but it seems to work better than its melee counterpart. 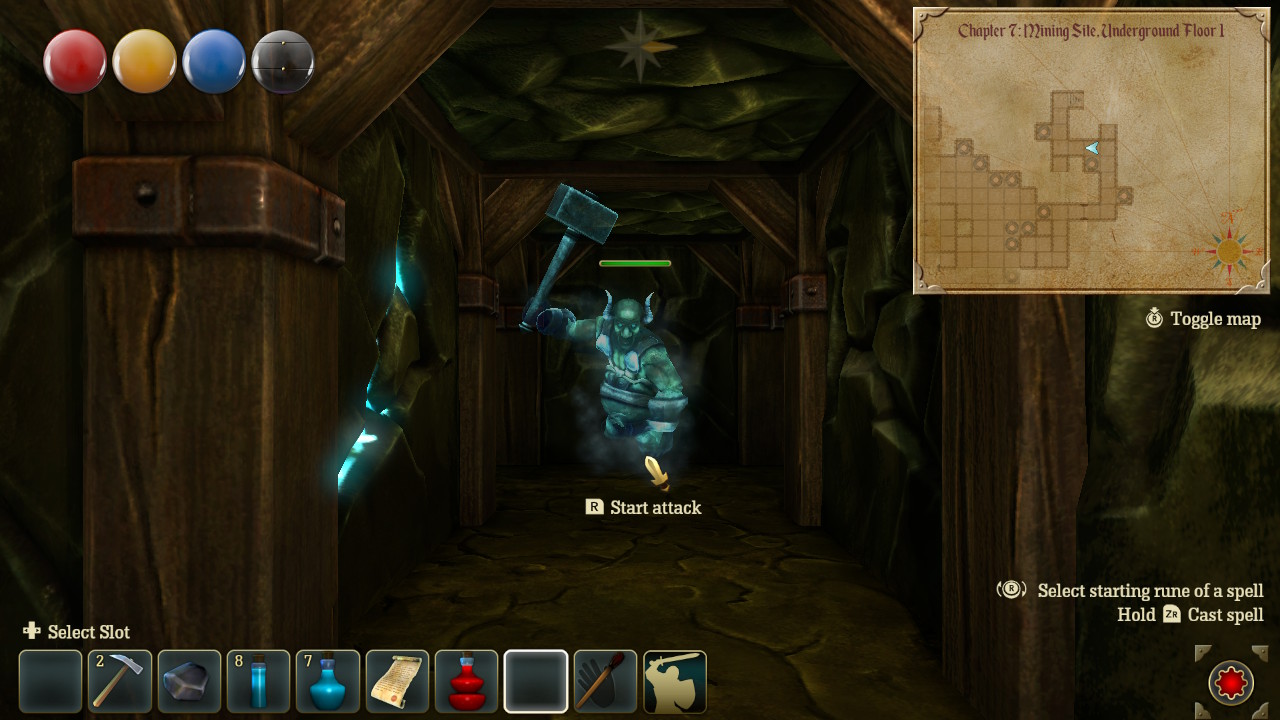 The graphics in The Keep are solid, but maybe a little too dark sometimes. Based on what I have seen from the Nintendo DS version, the graphics have been redesigned for the Nintendo Switch. Everything looks better, obviously, but The Keep, as you may have guessed it, is essentially a dark underground lair. It’s a place where you need torches to navigate easily, and unfortunately, they are sometimes of limited supply if you are aimlessly wandering for too long. I played the majority of this game in handheld mode and found The Keep to be just a bit too dark for my liking. I had to turn auto-brightness off in order to get that little bump of screen juice to see where I was going at times. The Keep’s soundtrack and voice acting are top-notch. Who would have thought that dripping water would actually sound like dripping water and the rats would sound like rats? Although it might be trivial to some, these little touches go a long way in providing believable ambiance to a supposedly dank lair.

The Keep is an overhauled port from the era of the Nintendo DS, and is only held back by this history. The era of swiping with a stylus is over, and a few small control adaptations for the Nintendo Switch would have gone a long way in fixing things – but don’t let that deter you, The Keep is worth playing if you can look past its issues. The melee system swiping mechanic is downright annoying and totally unneeded, but the magic casting and spell building more than make up for it. It might even make you use your noggin’ from time to time as you figure out how to best set up your magic spells. The Keep sits solidly on the high end of the “OK” spectrum, and could easily be “GOOD” if only it could shake away from its dated control scheme.