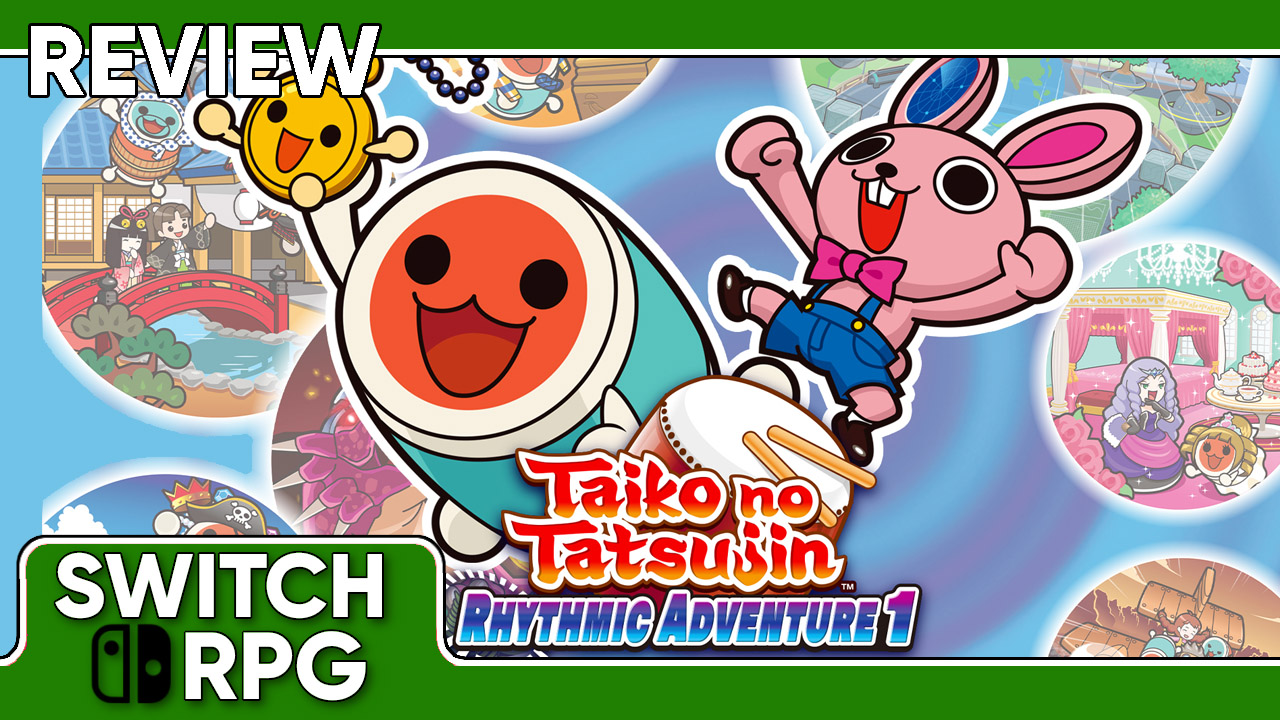 Very surprisingly, Taiko games have started to come over to the West on consoles in recent years. Taiko is a drum rhythm game with two mascots called Don and Katsu. They are named after the sounds the drum makes when you hit it from certain angles: hitting in the center of the drum gives off the sound “don” while hitting the sides gives the sound “ka”. Having played Drum ‘n Fun and enjoying myself immensely, I was very excited to hear that we would be getting the RPG versions of Taiko that were originally on the 3DS. Does the first game live up to my expectations? Let’s find out!

And just a note, although I am reviewing the games separately, if you wish to purchase both, the better bang for your buck would be to get the Rhythmic Adventure Pack, which has both 1 and 2 and saves you $10 vs. purchasing both separately for $29.99USD.

Taiko no Tatsujin: Rhythmic Adventure 1 has two game modes that you can play: Taiko Mode and Story Mode. Taiko Mode acts just like it does in Taiko no Tatsujin: Drum ‘n Fun, where you can play any of the unlocked songs on any difficulty at your leisure. You have the option of playing with either the button controls, the Taiko drum, or motion controls, but in this version you can only play single player. With story mode, however, you can only play with the button controls. More than likely, this was probably due to the fact that the story mode was a direct port from the 3DS version of the game. But when placed alongside the Taiko mode, which can support multiple control types, it is frustrating to not be allowed to play the game with the controls you want, and in the mode that drew people to this version of the game. 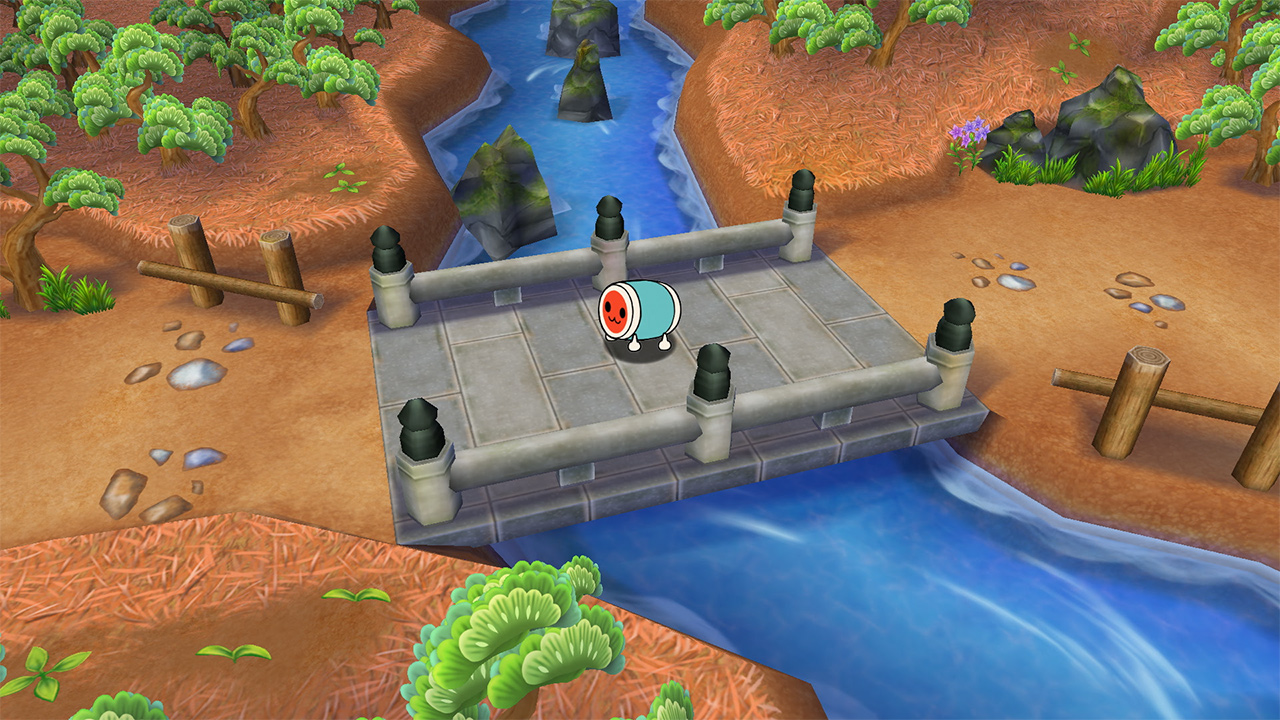 While playing through the game, you will control Don and travel across different areas to reach the next boss. As you walk around, you will come across random encounters, with different monsters being your enemies. And since this is a Taiko game, you will be playing one of a few set songs randomly. You and your enemy have an HP bar, the latter of which is based on the monsters at hand. If you hit the notes at the correct time and type, you will accrue a combo and after a set amount of notes are hit, your monsters will be able to attack. But if you miss any notes (or in the later stages, get “ok” instead of “good” when hitting notes), your opponent’s monsters can attack. The battle ends either if your HP hits 0, your opponent’s HP hits 0, or the song ends.

If the song ends and your enemy is still alive, the battle will conclude as a draw, but you will still get experience points based on your progress. If you lose, you will be taken back to your room, where you will have to teleport back to the last teleportation spot that you unlocked. There are teleportation spots in multiple places in an unlocked period of time. Navigating to one will allow you to fully heal yourself or teleport back to your room, where you can change your settings. 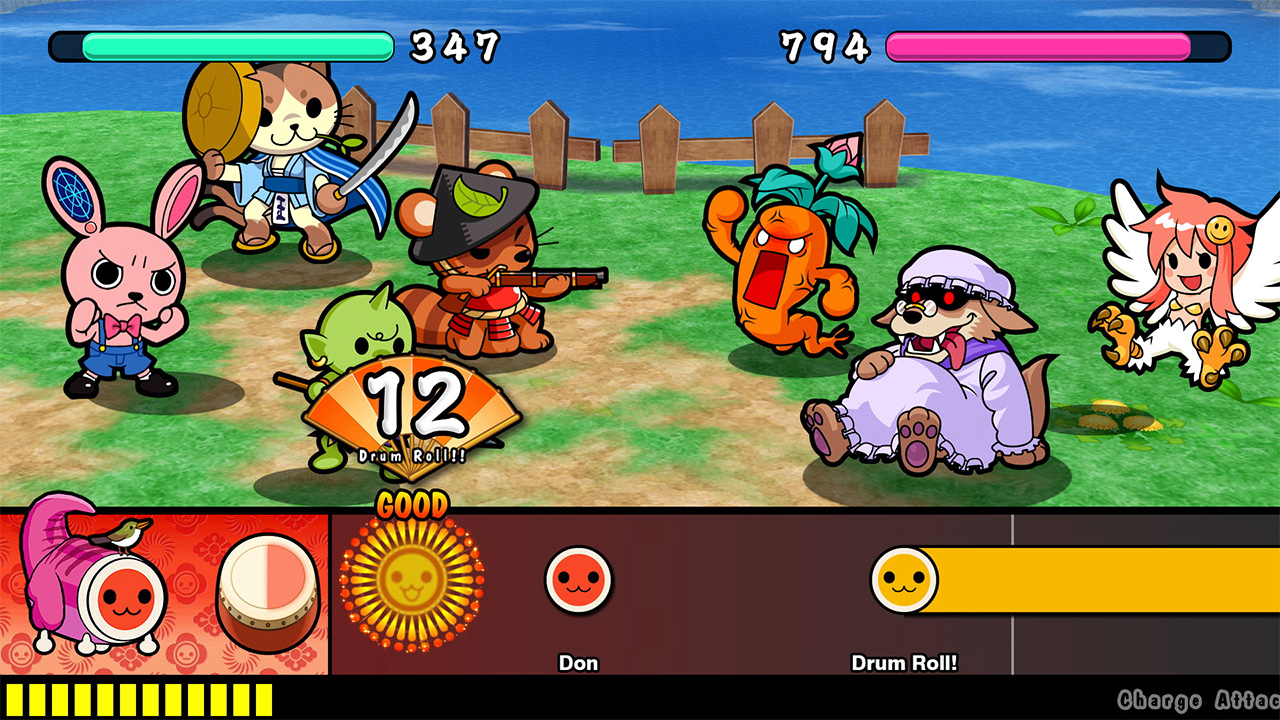 The game comes in three difficulties: easy, normal, and hard. This is based on the difficulty of songs that you will come across, as well as difficulty of bosses. You can change your difficulty at any point in your room. During the early parts of the game, you will come across songs that are on the lower end of difficulty that you chose and as you progress, the songs will get harder. Each time period has a set of songs that will play, so what you hear in one area, you probably won’t hear in another. However, this also means that as you are playing through an area, you will be hearing the same songs a lot. 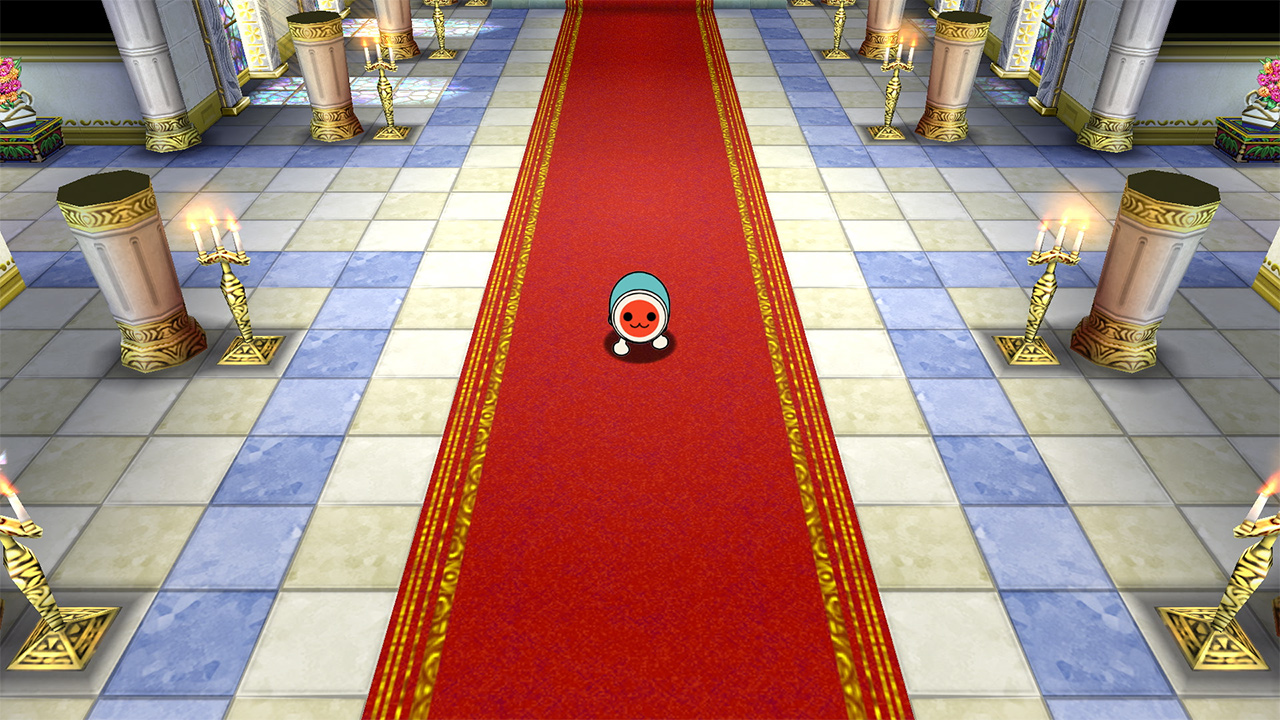 As you gain experience, every monster and character that you are able to use will level up, so you do not have to have a character on your team to level them up. The only stat that increases based off of how often you use the character is their friendship. As your friendship increases, the character will either unlock an ability if they do not already have one, or they will give you an item that you can use. Every character will have an ability, either one that unlocks or one that you can teach using books that you find during your journey. These abilities help you during battle, such as allowing you to get stronger the higher your combo is, or allowing you to attack with lower combos.

The narrative for Rhythmic Adventure 1 is very simple. You play as Don, the drum with the red face, who ends up stumbling into a problem with Ticky and Tocky, two characters responsible for keeping the timelines straight. Ticky has been broken apart and its parts are scattered across multiple periods of time. Because of this, time is starting to destroy itself and it’s up to Don and his friends to collect all of the pieces before the entire world is destroyed. However, it’s not quite as simple as just collecting Ticky’s pieces. A character known as Professor Tymedine is also seeking the pieces, in order to take control of time and change history. 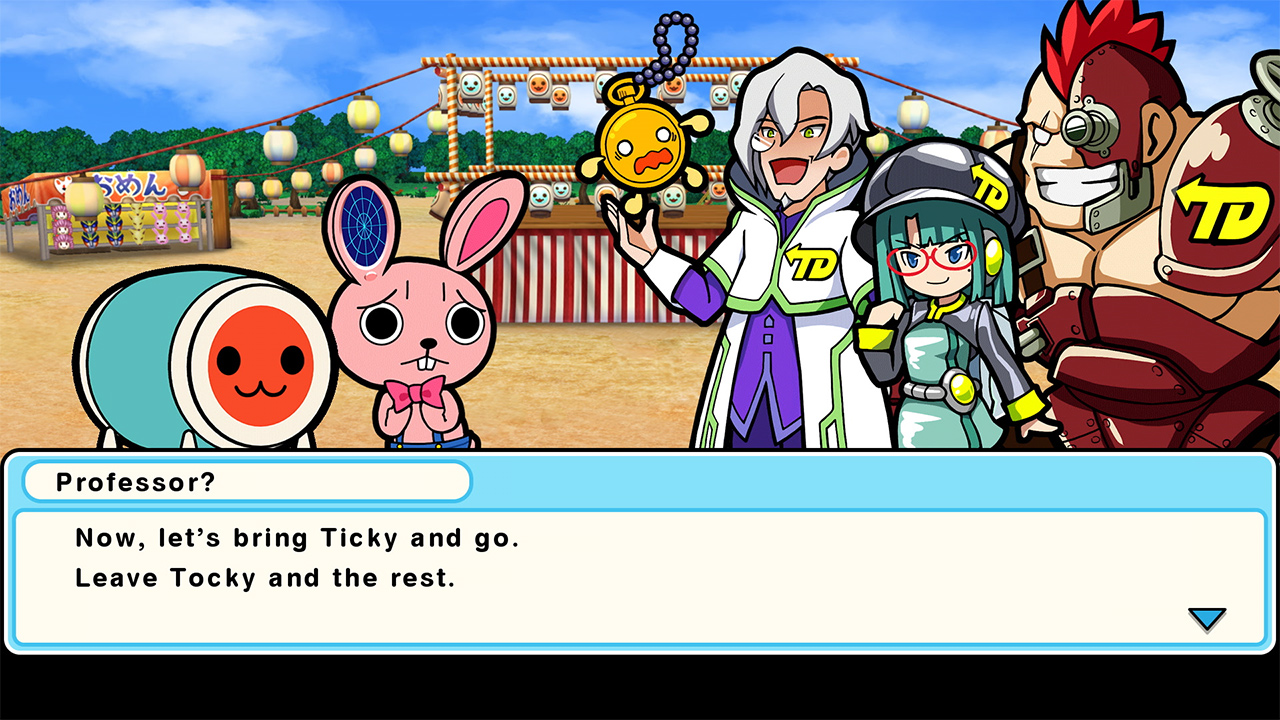 The story is told very simply, so if you’re coming into Taiko looking for a deep story, then you will be more than disappointed. The storytelling is comparable to a young children’s show, which is to be expected given that that is probably the target audience. Any conflicts that pop up while in a time period tie themselves up neatly before you make your way to the next time period. And with that, each period is almost like an episode, revealing a set of new characters and a new problem that those characters experience.

The strongest asset of Taiko is, of course, the songs that you can play. If you have played Drum ‘n Fun, you may be disappointed to see that there are a few repeats between those two games. However, there are at least 100+ new songs with Rhythmic Adventure 1 and 2 combined. Given the headache that can come from clearing copyrights of songs in different countries, I can understand the overlap. The artwork for the game is pretty consistent with the Taiko games in general, with all characters having a thick black outline and simple colors and shading. This style spans across all of the characters, including collab characters such as Jibanyan and the Monster Hunter characters, so it’s easier for those characters to blend in. 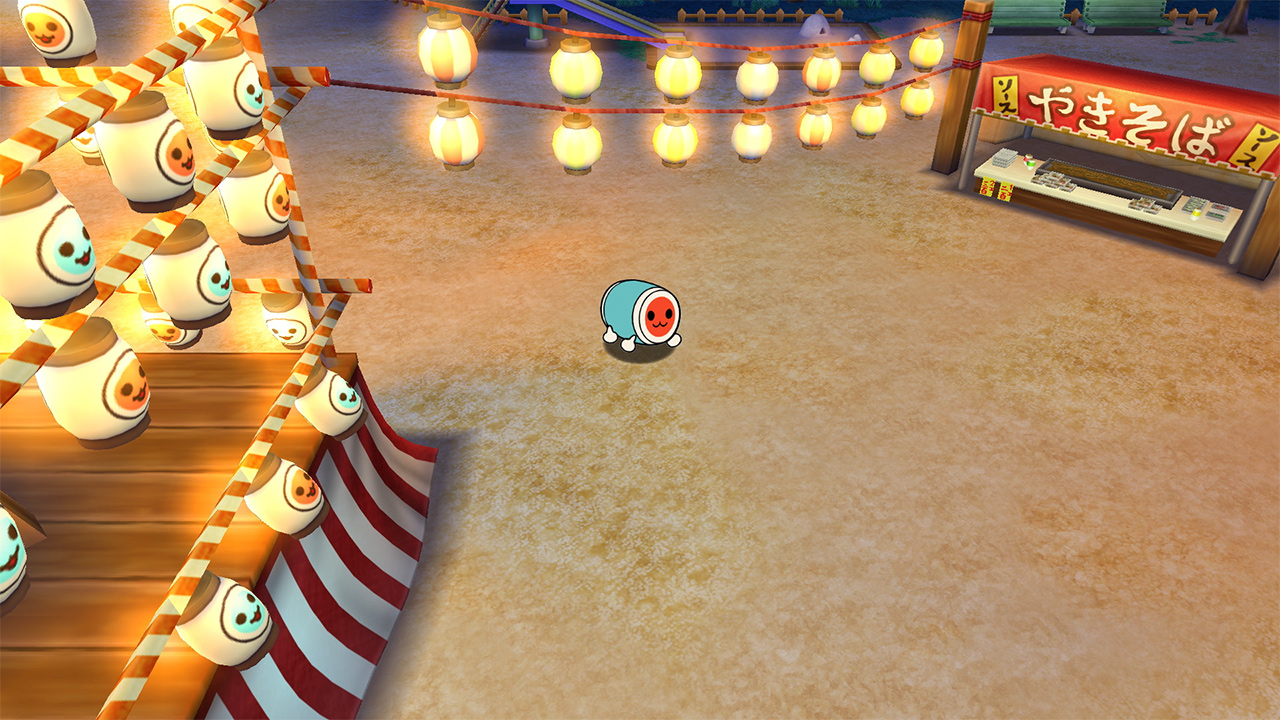 I was pretty excited to have another rhythm game to play, especially one with a story mode. With a surprising lack of rhythm games with story modes on the Switch, having one from a series that I enjoy playing made me ecstatic. Unfortunately, the game suffers from quite a few choices that leave it a lacking experience rather than one that should be exciting to play.

The limitations to the controls in story mode does leave a sour feeling about this game just being an attempt to push out a quick port. I don’t pretend to have an understanding of the porting process, especially when porting from the 3DS to the Switch, but when Taiko mode can accept multiple controls types, it does leave me confused.

The story doesn’t really offer much, and while sometimes in the story the game will throw out different challenges to change up how you play specific songs, they felt rather sporadic. Rhythmic Adventure is a cute, quirky game, but at the end of the day, if you’re looking for a Taiko experience, then you’re better off getting the other Taiko game currently on the Switch.