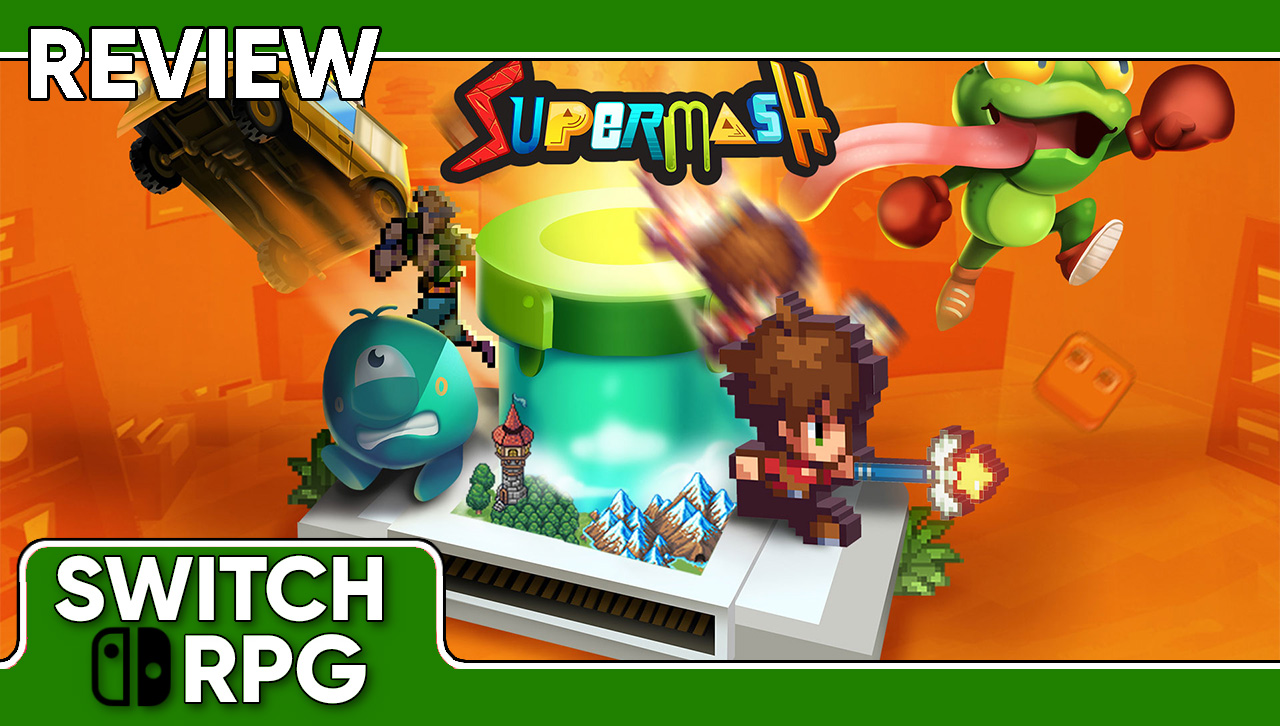 One of the most novel ideas of the DS era was Scribblenauts, a game where you were tasked with creating anything to solve everything. Protagonist Max was able to conjure any object or being imaginable from his magic notebook, and while the possibilities were colorful and varied, they were limited by the system the developers had crafted. Likewise, the objectives the developers designed in the form of puzzles were sometimes simplistic, and could only be solved by certain kinds of devices and combinations. Mind you, there were many combinations, but sometimes the qualifiers for the puzzles were very limiting. The fewer possibilities you give your player base to be inventive with the tools you’ve designed, the quicker the likelihood that they’ll grow bored with your system, and in the same way, the tasks you ask them to complete will also limit their engagement with your systems.

So, what does this have to do with SuperMash, the recently released game development title from studio Digital Continue? Well, this ambitious title tasks its players with creating endless amounts of content via video game genre mashups. One of the first text boxes you’ll encounter upon starting the game cautions players that the results of their Mashes may not be fun, or easy, or even work correctly. A bold claim, and a bit problematic, at that. Let’s take a look at why this is the case.

SuperMash masks its premise behind the doors of a video game store owned by protagonists Tomo and Jume. After browsing for some cheap used games at a yard sale, Tomo is gifted the mythical PlayTime Masher, a device that takes game cards of two different genres and combines them together. Genres have a number of “mechanics” that can be mixed with others, which can take the place of or override specific button inputs, impact the structure of game worlds, and dictate the pacing and method of enemy engagement. Most of these are very bare-bones, however, and some seem to take higher priority than others. Choosing to build your foundations with the RPG genre, for example, will likely result in a randomly selected chapter of an ongoing story (the number of chapters are limited and don’t always come up in sequential order) and will also usually have a shopkeeper and a menu. 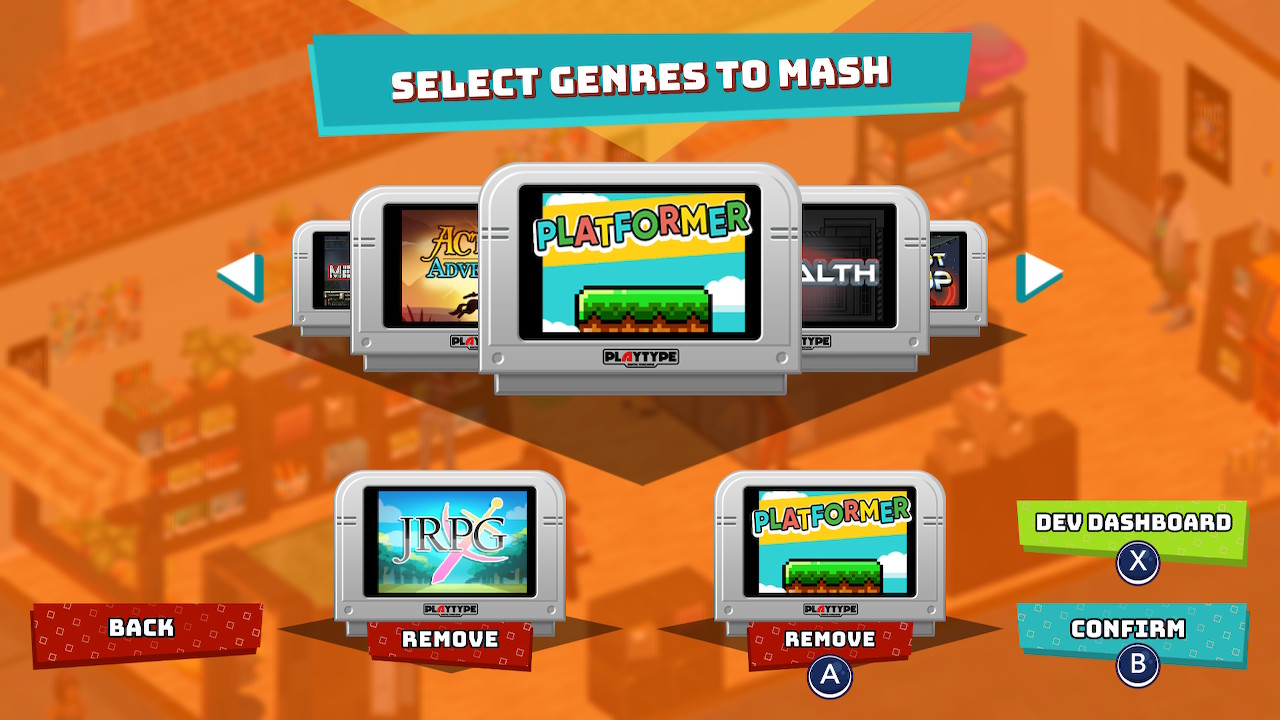 Aside from that, however, the additional modifiers range from the playable characters to access to certain inputs. Blending a Shoot-em-up with an RPG can result in vertical shooter battles, though the former genre can have multiple interpretations. Mixing Shmup with Action Adventure gifted me with an odd Zelda-like experience where I wielded a laser bayonet and had to find specific tools to progress within an allotted time period. Some games force time limits on the player, but a time limit can also emerge as a Glitch- random modifiers that can raise or lower the difficulty drastically.

Upon completing a Mash, you’ll be granted a set of rewards, usually based on the items, abilities, characters, and worlds you visited within. Sometimes these come in the form of dev cards, which can be plugged into a Mash prior to generation to ensure that a certain element – playable character, enemy, weapon, level, etc – will be featured in the Mash. You can also gain currency both while playing a Mash and as a reward for completing one, which can be used to buy capsules containing more dev cards.

The point of all of this is not simply to develop titles to your heart’s content. Many NPC customers will ask you to craft games with increasingly specific features, from the length of the experience and specific genres to the levels and items featured within. This is why you’ll want to keep creating and completing Mashes, as you’ll need rewards to satisfy customers and make certain genre Mashes feasible for yourself. There’s not much else I can say about gameplay specifics, because just about any sort of combination will yield its own wacky characteristics.

The premise established in the prior section is all the exposition you’ll receive regarding the start of the game, though the reason Tomo starts making Mashes is to help his sister save her video game store. I suppose creating original content will help do that, regardless of its quality. In any case, Tomo and Jume will enlist the help of their friend Rob in order to unlock the secrets of the Mash Machine and save the store. The writing here is paper thin and lacks any sort of endearing quality or character, filled with lines that leave no impact and mostly bore. 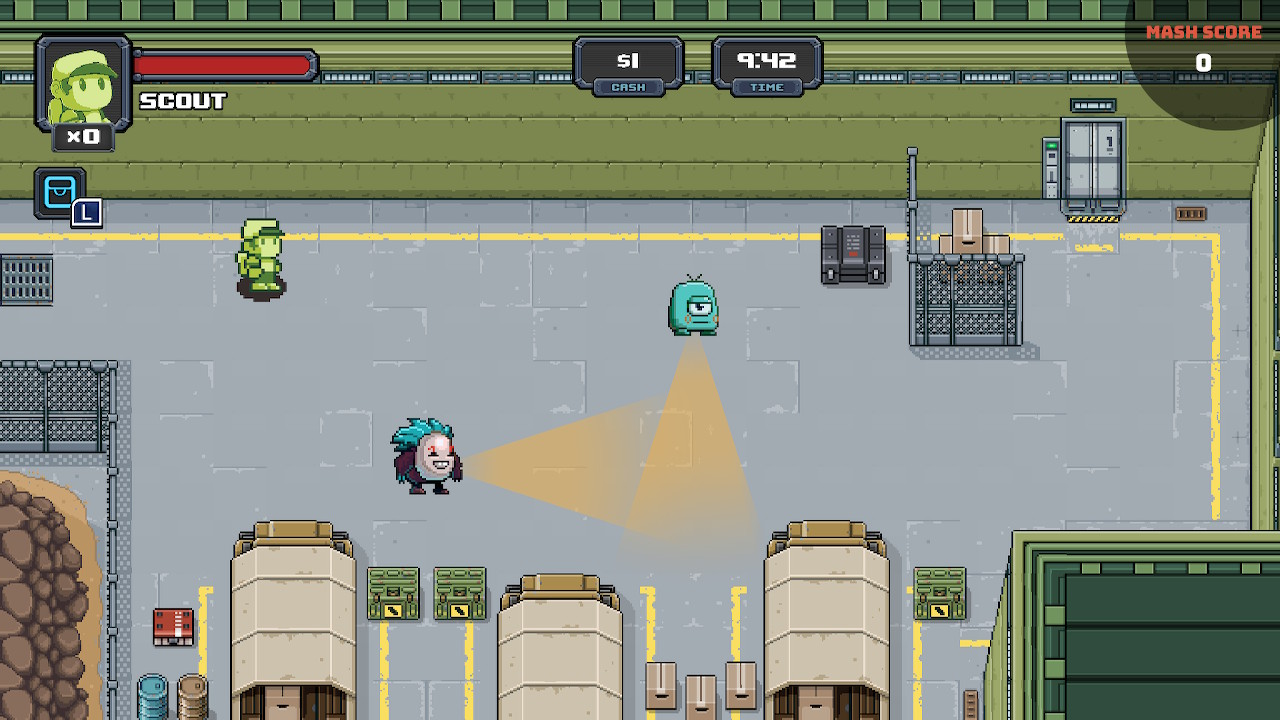 I commend the artists whose work is featured in SuperMash, if only because the amount of art styles across the six available genres is impressive and manages to give no semblance of aesthetic consistency in any way. Honestly, the only thing consistent about SuperMash’s aesthetics are their consistent inconsistency within games and the poppy and goofy aesthetics of Jume’s shop, which feels like a completely different and unified experience. The number of weapons, enemies, and characters just gives the game a mish-mashed feeling, which is appropriate, but ultimately an eyesore. What makes this further frustrating is that, due to the relative inconsistency, there’s little indication of what elements of level design are interactive. I played a platformer Mash where each individual flower on the ground also counted as a platform that would get in my player character’s way. It was bizarre.

The music within Jume’s shop is similarly lighthearted and helps round out the presentation of that part of the game rather well, but every other track featured in the genre Mashes feels like a slightly altered, cheap knockoff of a famous or classic title. Many are serviceable, but don’t make the experience more engaging, with a number of tracks featuring short loops and grating orchestration.

The goal behind SuperMash is primarily that of a “content creation” platform – the game’s eShop page encourages sharing Mashes with friends and streamers via its save-code system. You are encouraged to share its myriad of combinations with those tenacious enough to take on the often janky, frequently frustrating results. Chances are, with the amount of Mashes possible, you might find one that is easy or enjoyable enough to play, but the number of bizarre and unenjoyable results you’ll need to sift through in order to find a potentially amusing result is tedious. 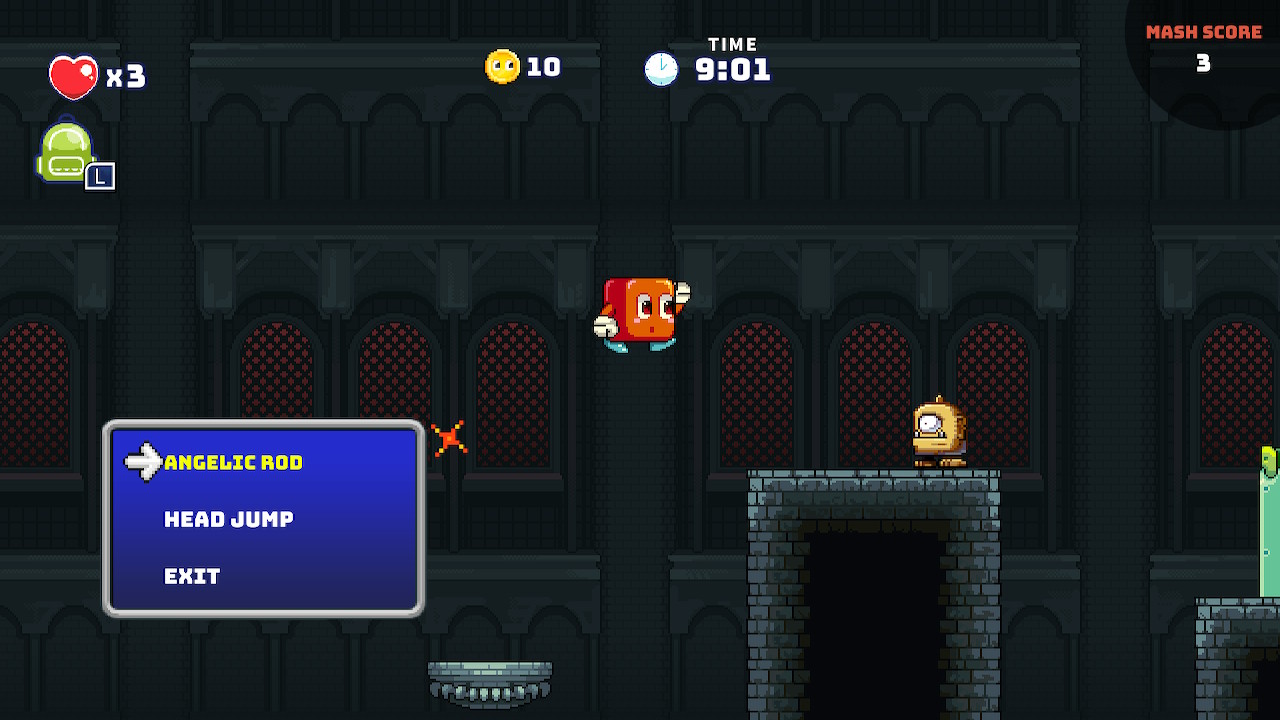 There is potential hidden away in some of SuperMash’s combination mechanics, but even when you develop a series of dev cards to capitalize on your favorite game elements, the randomization factor plays too heavily into the creation of each Mash to reliably predict what sort of product you’ll create. Even then, the RPG mechanics are shallow, the platforming is janky, the level designs are too randomized at some times and too linear at others, and the developer-designed boss battles that are crafted to present a legitimate checkpoint and sense of progression are infrequent and lack novel design.

Too often, SuperMash just isn’t very fun, and the moments where it presents a silly solution aren’t carefully polished enough to be exciting or engaging, rather brief reprieves from a mostly mediocre experience. If you’re looking a bit of sporadic and bite-sized chaos in the way you play video games, there are many carefully planned and developed products out there that tackle just about every genre SuperMash offers with greater success. If you want to play the role of a budget eShop developer, however, then this game’s trial-and-error, jumbled messes might be the perfect opportunity for you.