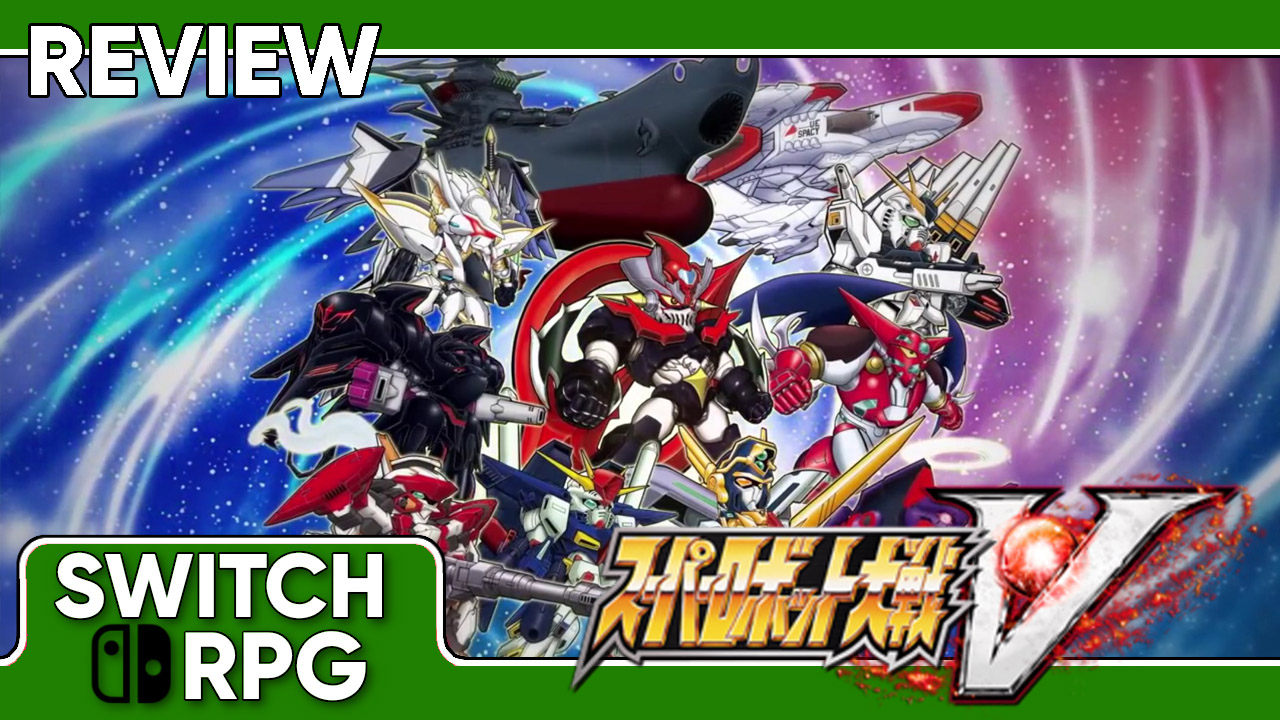 With the Switch not being region locked, it’s a great system for experiencing games that you normally wouldn’t be able to play. While any form of English support in games that never naturally made it to our shores is uncommon, it isn’t unheard of. Fortunately for me, one particular series that has interested me for some does have some support!

The Super Robot Wars franchise has primarily only been released in Japan, with only a couple games receiving releases elsewhere. Upon discovering that several games were being rereleased on Switch and would also have English support, I jumped at the chance to take a look at this tactical RPG series once and for all, starting with Super Robot Wars V.

In Super Robot Wars V, you can choose to play as either Soji or Chitose, two humans that find themselves right in the middle of a war against the Gamillans. The Gamillans wish to destroy the human race, having already launched a missile at Earth which subsequently dried up the oceans and contaminated the air. At the rate that things are going, the Earth is heading right for destruction.

However, there is one last hope – a crystal was delivered to Mars from a planet known as Iscandor. With this crystal, the humans have a chance to use a wave motion engine that can send them to Iscandor in order to receive knowledge on how to restore the Earth to its former glory. 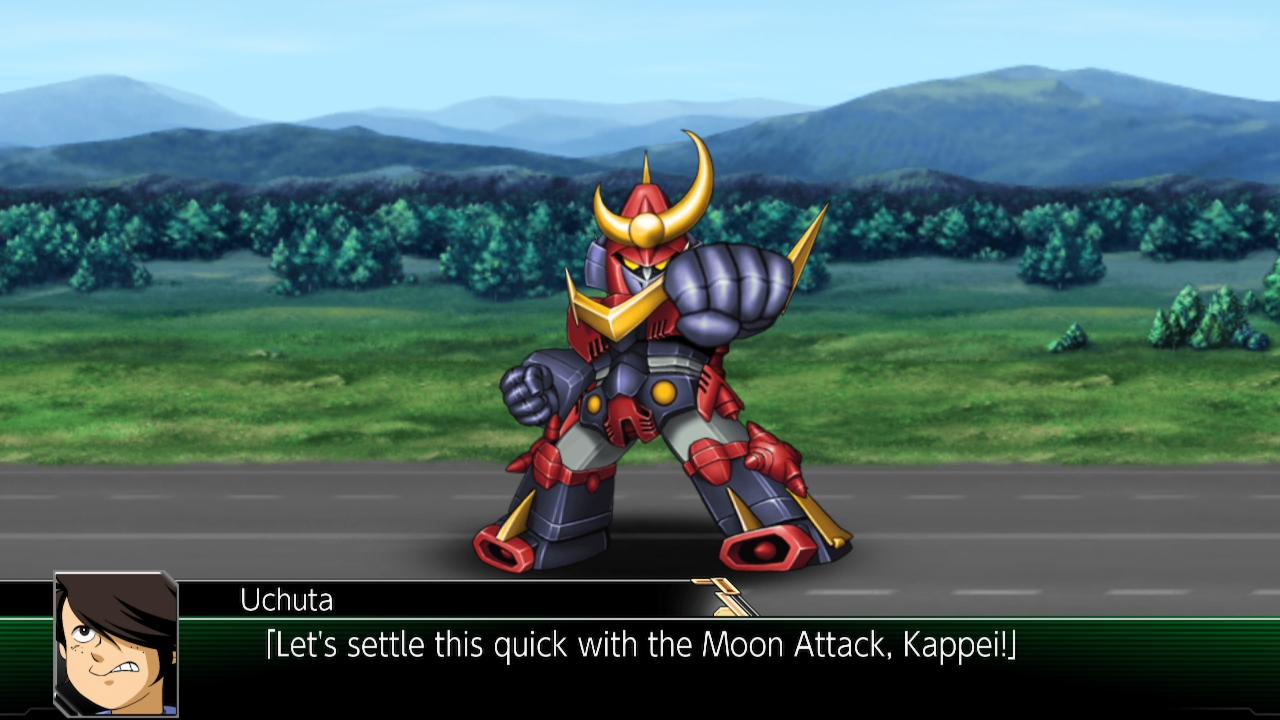 Since this is a crossover of several different mecha anime, there will be a lot more scenarios to experience alongside the main plot. Those that prefer a more focused narrative may consider this a detriment, as you will find yourself jumping through several worlds with their own sets of characters. With appearances of characters from several Gundam series – Evangelion, The Brave Express Might Gaine, to name a few – fans of mecha between 1970-2015 will likely recognize many of the characters here.

All cutscenes are told in a visual novel format, with all of the exposition happening in these moments. There are a lot of references to the different mecha anime that all of the characters are a part of, but the game does a decent job of keeping players in the loop. Of course, if you are not aware of any of the subject matter, there is not much character development for most of the supporting cast. That being said, the relationship between Soji, Chitose, and Nine is very nice to watch unfold. 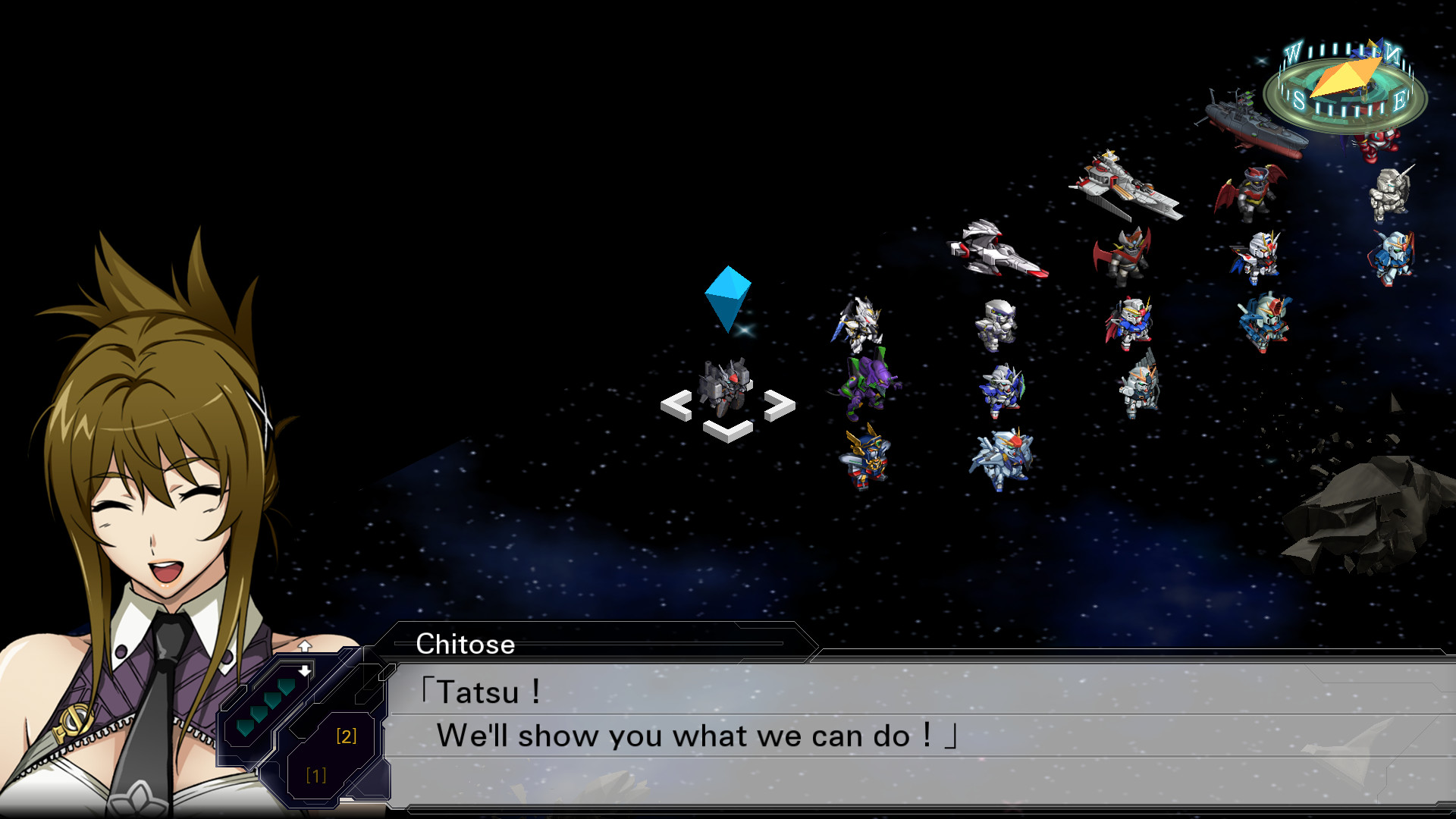 Because Super Robot Wars V was not published in the West, there are a few quirks with the English translation, notably some grammatical and formatting errors that are most prominent in the tutorial section of the game. The text reads as though it’s more of a direct translation rather than taking steps to make the sentence structure feel more natural for an English speaker. Not bad, but perhaps not ideal either.

Along with the meaty main story, there are also bonus scenarios available that are either free or can be purchased outright. The ones for free unlock after completing specific chapters. If you wish to buy any of the premium DLC, however, you will need an Asian eShop account, as these games do not exist in any Western eShop. The free bonus scenarios primarily deal with a specific group of characters and any levels and skills will be scaled for that particular mission.

Super Robot Wars V is a tactical RPG where you move your units across a grid to attack the opposition. The game is completely turn-based, giving you the chance to move and/or attack before handing control over to the enemy. With each unit, you have a variety of different actions to perform: move, attack, use spirit commands (skills that use your SP gauge), use ExOrder/ExAttack (support skills that use your EX gauge), or even use unit/ship-specific transformations and skills.

Each map will have its own criteria to beating the stage, such as beating a specific boss unit, remaining alive for a set amount of turns, stopping units from entering a specific area, and more. The difference in missions, along with the SR missions (harder tasks put in place that can reward you with more money if completed), makes it so that combat doesn’t ever get too stale. 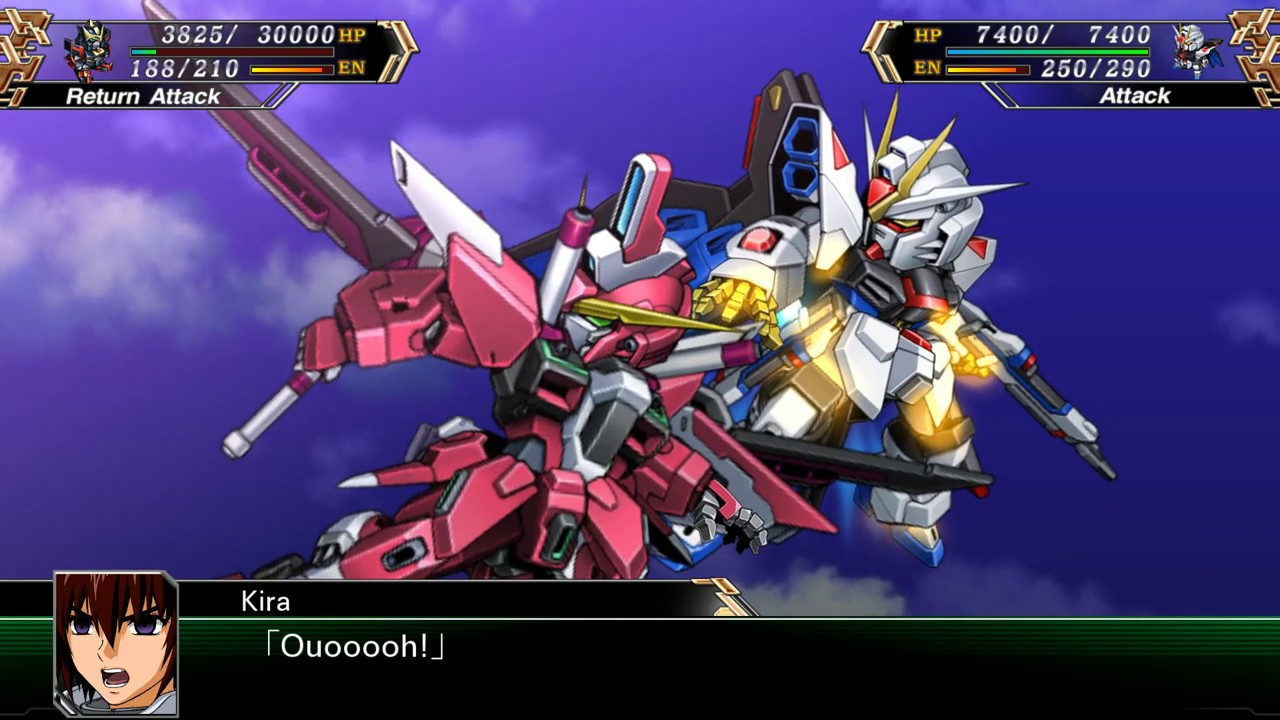 Each attack has its own attack value, as well as EN value, which is needed to use attacks. The higher the attack value, the more EN it will likely cost. There are other factors that go into figuring out which attacks you can use – a unit’s focus and whether that unit moved that turn or not, for example. When it comes to moving and attacking, if you want to move, you’ll want to do that before attacking, as attacking will not allow you to move that unit until the next turn (unless that particular unit has the ability to move right after attacking).

Besides enemies, accuracy will be something that you’ll have to battle with as you go through the game. Against easier enemy units, you don’t have to worry about you or your enemy’s accuracy, as yours will typically be high enough not to cause any issues. However, as you progress and come up against stronger bosses, you will find that your accuracy will start to matter. While there is a minor difference in accuracy between attacks, generally, your accuracy will remain the same between different attacks against a particular unit. 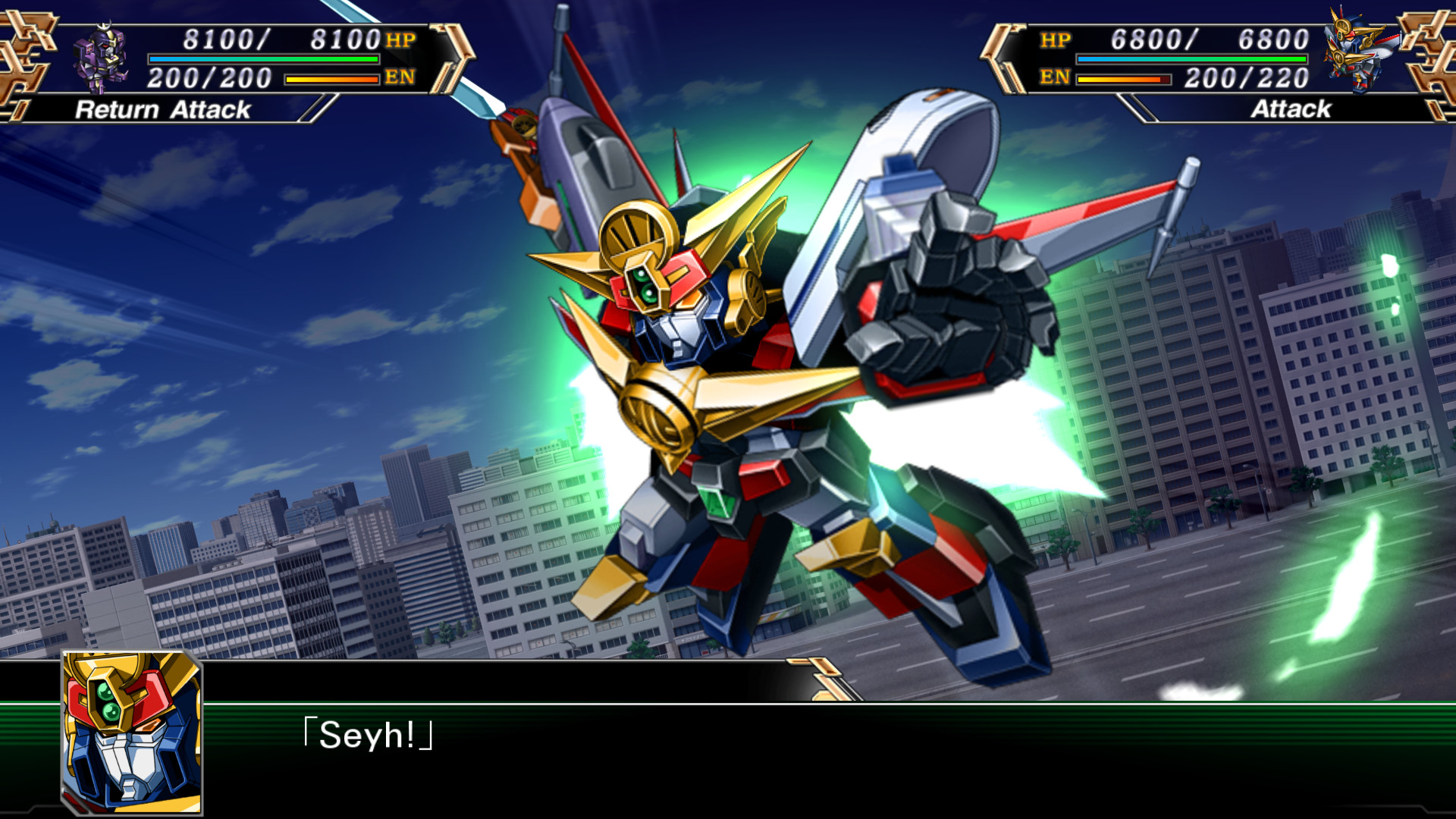 During battle, all attacks will be shown through an animated cutscene. These can be toggled on and off at any moment when a battle is initiated. Once the battle starts, the unit who is attacking will typically go first unless the opponent has an ability to start their counterattack first. All units will have the chance to counterattack, so keep that in mind if you are attacking an enemy while your own unit has low HP. 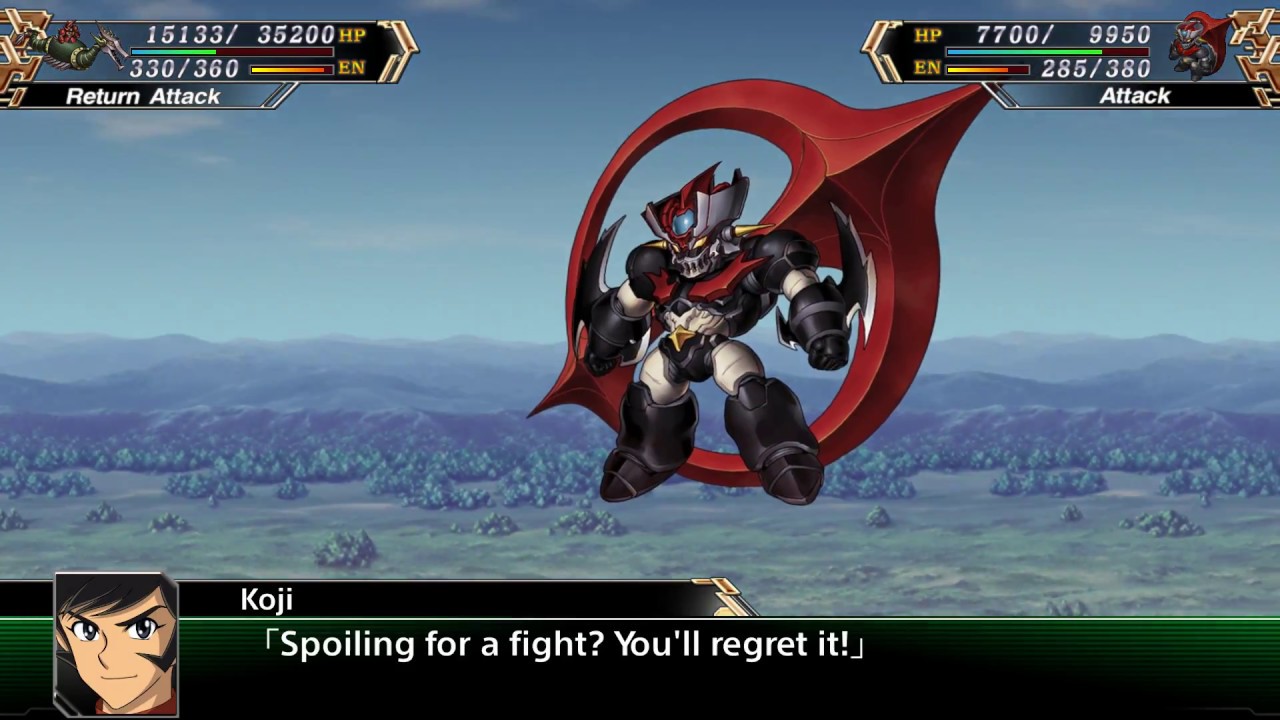 In between missions, you have the option to customize and improve your units. You can equip them with new skills, use tactical points that you earn in missions to improve their stats, or send them out using sub-orders to get more money, tactical points, or to just level them up.

Super Robot Wars V has an easy and normal difficulty, but honestly, if you’re looking for a challenging tactical RPG, you may want to look elsewhere. While some of the bosses can pose a threat, it’s mainly due to low accuracy and dwindling SP as a result of longer battles. Super Robot Wars V will send waves of enemies at you, most of which won’t pose a challenge and are nothing more than glorified practice dummies. For some people, a tactical RPG on the easier side might be just what they need, but diehards may only find disappointment.

The game switches between 2D art for the visual novel portions, and 3D models for the tactics sequences. All major and supporting characters have 2D sprites and are fairly emotive. The art style of each character varies depending on the era that each character came from – a nice touch that makes it very easy to characterize which group of characters are associated with each other and generally what era they’re from. 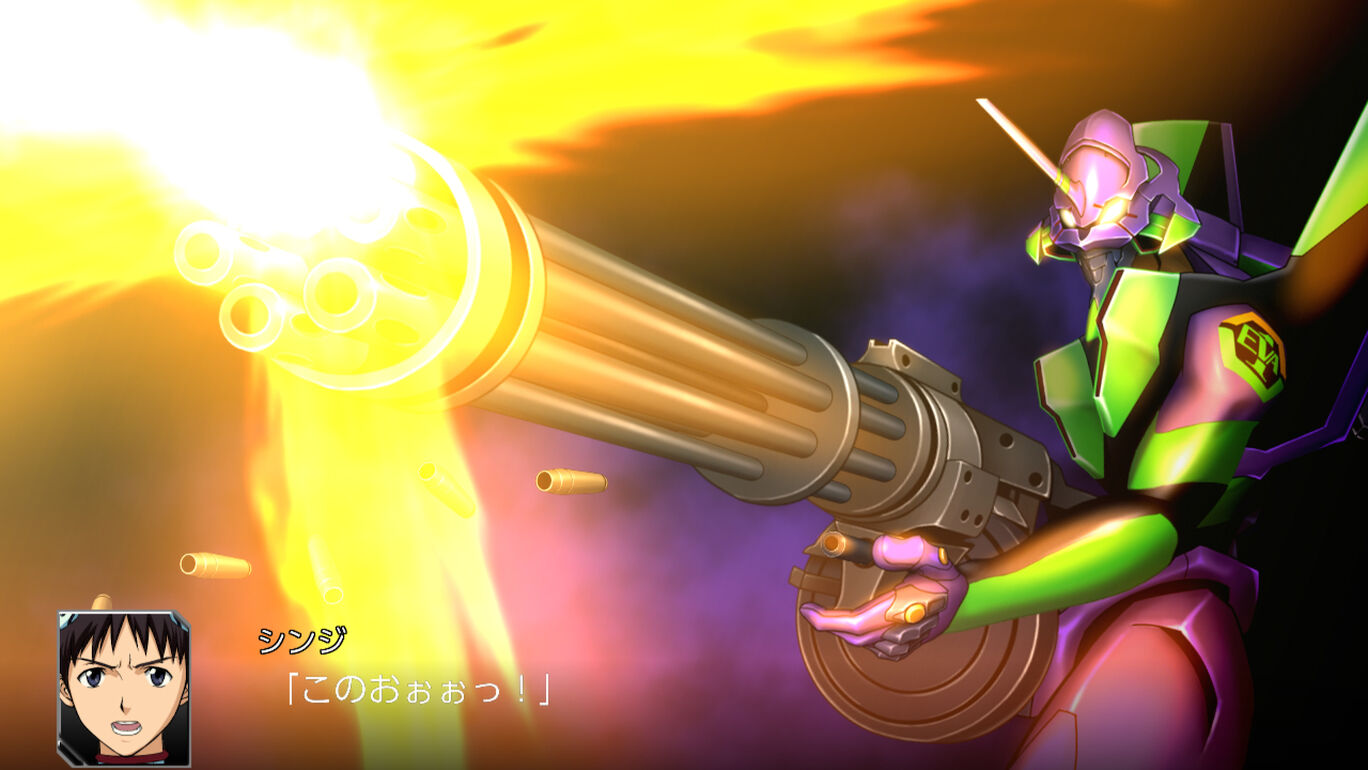 The 3D models of the units on the map are detailed well. The maps themselves are fine, but nothing to write home about. Where the 3D art really shines, however, is with the individual mecha battles. Every attack has its own animation, unique to every single unit in the game. While some of the earlier attacks are just simple gun-firing or sword-slicing animations, as you progress through the game, more visually satisfying attacks will become available. Honestly, all of them look amazing, and you can feel the love for each series that was represented in this game.

Super Robot Wars V does feature some voice acting, but it’s only used sporadically. The music is great, once again pulling from the appropriate source material. And the opening and ending songs, both performed by JAM Project, rounded out the soundtrack in an excellent way.

Initially, I wasn’t sure how I would end up feeling about this Super Robot Wars V. Mecha has never been a favorite genre of mine, so I had a minor worry that it wouldn’t capture me, even with it being a tactical RPG. Thankfully, the game turned out to be a fun experience all around and I found myself constantly coming back to play.
If I had any complaints, it would be that as the game progresses, stages grow longer and longer. And while I don’t mind longer stages, when the missions suddenly change from defeating one boss, to defeating a whole swarm of enemies, defeating two more bosses, etc., it can wear on you quickly.

For non-mecha fans, you might also find the constant hopping around between characters and scenarios a bit bothersome. This game (and specifically, this series) is known for collaboration and as such, you have to find ways to pull all of the characters together. It can end up being an overwhelming experience with just how many units are introduced along the way.

That said, it’s amazing that such a large series is alive and well, though it is an expensive point of entry for Western fans keen on importing it. Regardless, Super Robot Wars V is well worth your time if you have (or desire) a chance to experience it.