Shipwrecks are cool – well, not for the shipwreck-ee, but the idea behind them is interesting. There’s something I’ve always found fascinating by the concept of setting out on a journey, only to end up somewhere else entirely – bonus points for every vile being or malady that is encountered due to these unfortunate events. Naturally, if such things are alluded to in the title itself, it has to be good, right? This is why Stranded Sails – Explorers of the Cursed Islands has been on my radar for some time, and I finally took the dive thanks to the recent Switch holiday sales. But enough preamble – is this game, and its secrets, worth uncovering? Strictly speaking on its current Nintendo Switch form: no, and I’ll explain why I’ve come to this conclusion. 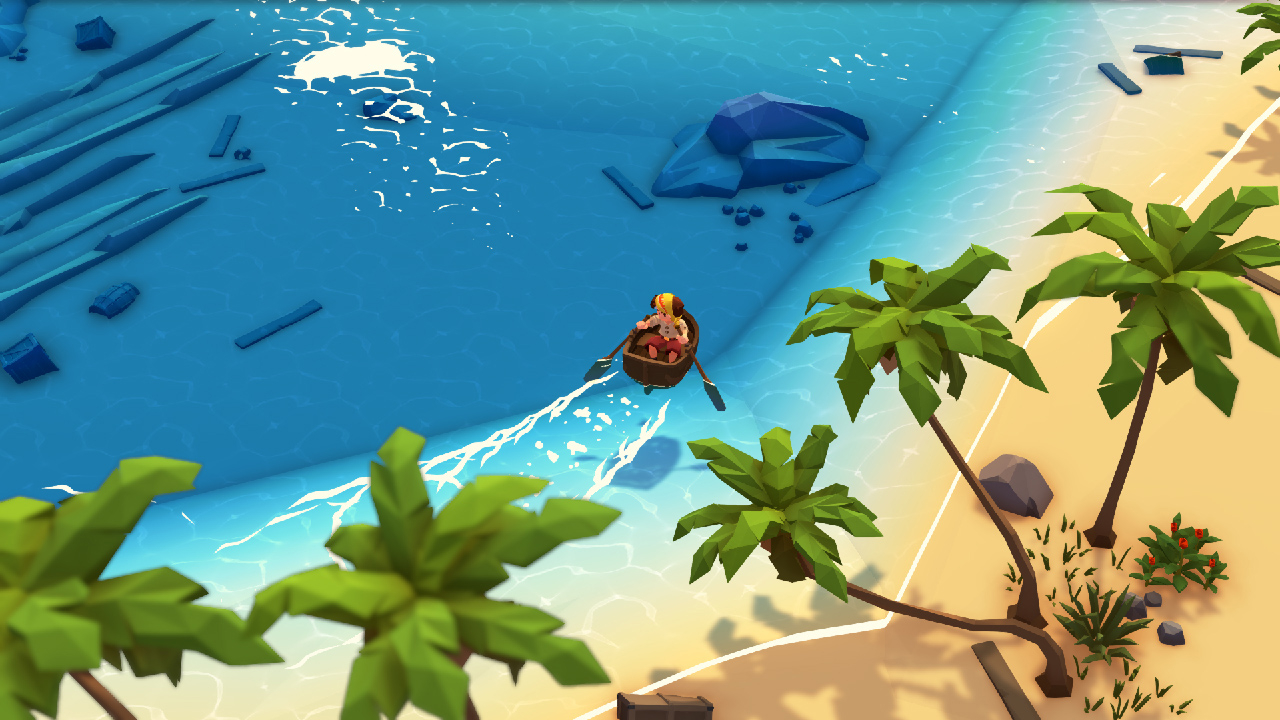 A boy and his seafaring father are on the cusp of leading an adventure into the wide – and wild – unknown. Both of them, including the other passengers, long for a land of opportunity, as their previous habit was nothing more than a musty, cramped city. On the eve of their journey, however, the boy dreams of an exotic island, a peculiar parrot, and – of all things – a shipwreck. This is the exact opposite of the land of milk and honey they seek, mind you, but the boy shrugs it off as nothing more than a silly dream. Apparently, he has not watched Final Destination.

Sure enough, towards the end of their sea voyage, a parrot shows up just before a violent storm appears, devouring their ship in the process. Afterwards, the boy washes up on the shores of a mysterious island, with nothing more than hope that the others will share the same stroke of luck. Will the boy be able to find the others from his band? Will the island accept them, or will it rear its ugly – dare I say “cursed” – head instead? Could all of this have been avoided if they had watched a laughingly terrible movie series prior to the outing?

Who can say – but one thing is for certain: Stranded Sails – Explorers of the Cursed Islands takes a long time to get even remotely interesting. What starts out pretty solid as you’re rounding up everyone for the adventure into the unknown, learning a little bit about each passenger, ultimately amounts to little in the long run. And certainly, there are strange things going on at the island, but those aren’t touched on at all until you’re well into your adventure.

Two examples of using the mysterious island theme properly are LOST and Ys VIII – both of which rely on mysterious islands spurred on by unfortunate circumstances (a plane crash and a ship wreck, respectively). These examples succeed by drip feeding you the mystery from the very beginning, rather than holding the cards for what seems like forever. Weird things happen, and you are constantly wondering why, whereas Stranded Sails does little to stimulate mystery until much later in the journey. All in all, Stranded Sails starts out strong, but takes the wind out of its sails early by doing little to keep things interesting – both from a narrative and a gameplay perspective. 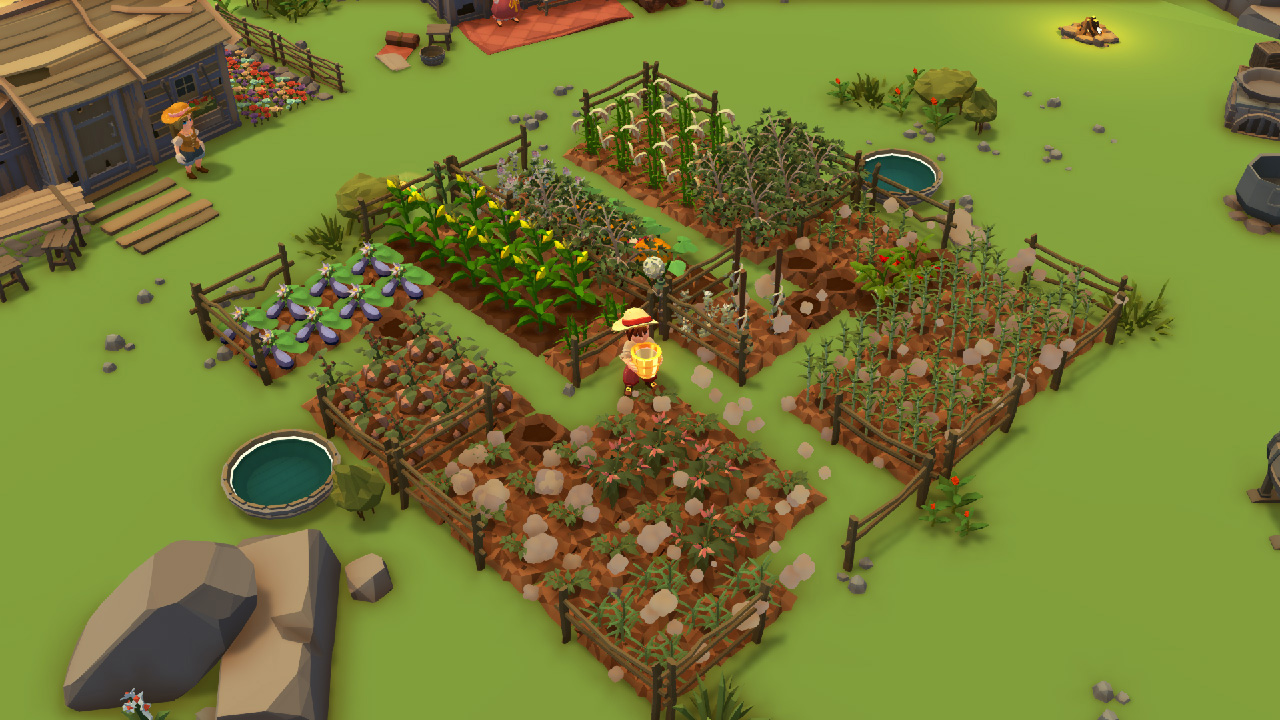 Stranded Sails – Explorers of the Cursed Islands is primarily an adventure game despite featuring some crafting, farming, and action elements here and there. Your ultimate objective is to “survive,” though this isn’t nearly as daunting of a task as it might seem on paper. The boy will slowly uncover the island, sourcing food, building shelters, and finding folks from his party along the way. Fortunately for him, the island is a natural habit for all sorts of groceries, which can be brought back to the home base in order to better sustain it. Farming is pretty standard fare – dig holes, plant seeds, and keep them watered until they are ready to harvest. The length of this cycle depends on the crops in question, but most only take two to three days in-game to be ready for the scythe.

Food can be cooked as single-serve items that can boost your energy meter – more on that later – or you can whip up a community stew which will not only make your friends happy, but also provide an excellent, multi-use food source for the entire day. Make enough stew for the insatiable mob, and they just might upgrade that leaky watering can, or provide a better shovel for you! Single serve cooking, on the other hand, is an annoying trial-and-error system that has you combining ingredients in hoping of making new things, but the actual process of selecting and placing ingredients is more tedious than it should be. Fishing is also a thing in Stranded Sails, and is as easy as timing button presses – the reel – with the splashes of the fish. I have a thing for fishing mini-games in general, and this one doesn’t disappoint.

As you find survivors, shelter will become a high priority – not because the inhabitants will die or anything, but because building them plays a major role in progressing the story. These tasks are not near as exciting as they seem though, as most simply require you to gather a couple of ingredients in order to construct an entire shack – if it was only that easy in real life! Nevertheless, building shelters will appease both the citizens and the occasional story gates. 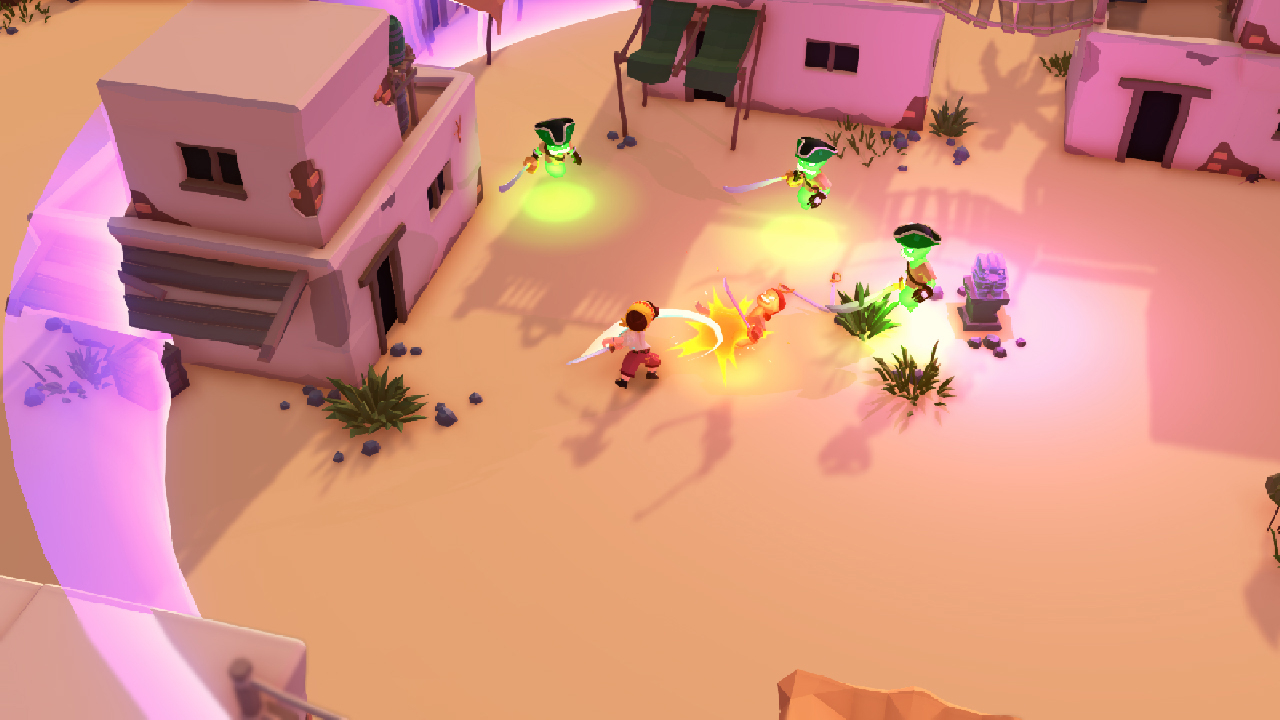 Oh, you’re here for the combat? Well, I hate to break it to you, but these cursed lands are quite tame, and require little interaction from the player. Though combat does come into play a little bit later in the journey, it is by no means a focal point like the gameplay trailer would suggest. Even when combat is unlocked, it is fairly underwhelming in execution.

The aforementioned lack of interaction doesn’t just apply to combat though – one of the biggest problems in Stranded Sails is a lack of things to do in general. Exploration is okay, but without enemies to worry about and very few things to interact with, the explorative appeal dies out almost immediately. Competing titles, such as Minecraft, Stardew Valley, or any number of decent Harvest Moon clones likely succeed here because what they offer is entertaining, rather than feeling like you’re just checking off a list of boring chores.

This issue is compounded by world design and the energy bar. Points of interest are spread far and wide, with little (if nothing) to do in between them. Your best bet is to sprint 24/7, but this comes with a downside: you’ll pass out if you run too much. While it makes sense to limit the sprint, and even tie it into the energy system itself, Stranded Sails takes it to the extreme, punishing you far too much for very little player gain. 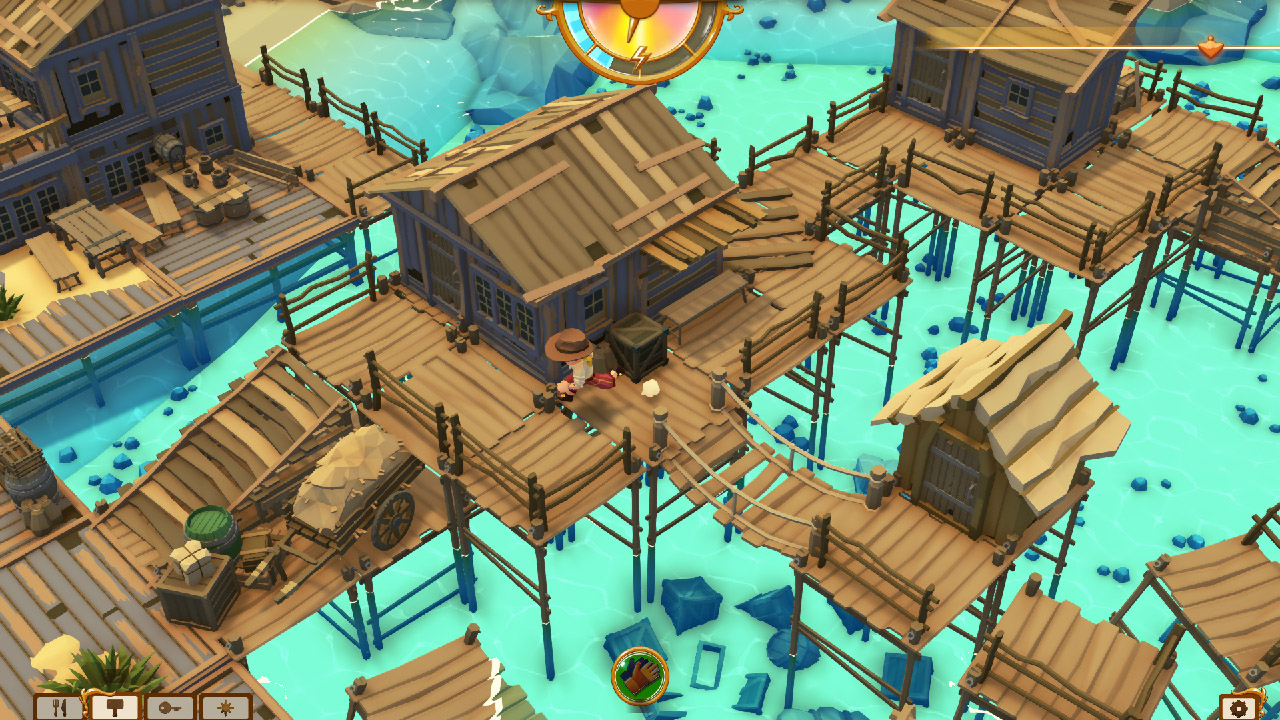 An obvious balance can be struck here, but as it stands, you’ll spend more time sleeping than exploring, and this remains an issue throughout the game even after acquiring better means of energy sustenance. Like seriously – you might have to eat a Thanksgiving meal after catching a rather nuisance fish, else pass out from exhaustion. Ultimately, there are only a few things to do here, none of which are incredibly fun, and you are punished severely – via energy loss – when trying to perform the most basic of tasks. A decrease in the amount of energy expended across the board would work wonders here, but you’d still have the issue of the world feeling empty without a lot of interactables, or many enemies.

The biggest boons to the Stranded Sails package are its graphical and ambient design choices – both of which are fitting to the theme, and pair nicely with one another. The cel-shaded look of the artwork, while basic at its core, looks good despite some framerate hiccups at times. Although the soundtrack isn’t mind-blowing, it does the job well enough that it shouldn’t cause complaints either. For the most part, it does a decent job of suiting the ambiance that an adventure on shipwrecked shores would demand.

The most heinous acts in Stranded Sails are the bugs, which have yet to be addressed despite being on store shelves since October. Complete lockups are somewhat tolerable when a game is fun, but that obviously doesn’t apply here. Frequent autosaves remedy this issue – sometimes, but not always, meaning all of the previously mentioned problems become more annoying than usual.

What we have in Stranded Sails – Explorers of the Cursed Islands is a complete failure to launch. Not only does it fail on a fundamental level, it is plagued by bugs that prevent you from appreciating the (few) positives it offers. All of this in a $24.99USD package is absurd, especially considering comparable titles, like Stardew Valley, are immensely more polished and cheaper, leaving little reason to play until patches are a thing (if ever). Even with patches though, 2020 is here, and many similar titles are coming very soon, so Stranded Sails may be best left on its own accursed shores.