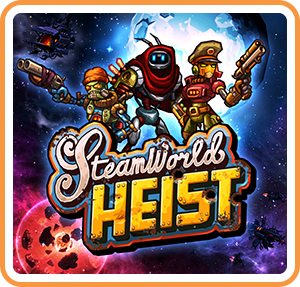 A few weeks ago I outlined my first foray into 2D sidescrolling tactical RPGs. While reading that review is not necessary, the important takeaway from it is that I ended up rating the title as OK by SwitchRPG standards (ie. notable flaws) primarily because I felt the dimensional transition gave it an excuse to drop much of the depth and complexities often associated with the subgenre.

SteamWorld Heist is also a 2D sidescrolling tactical RPG, however it manages to maintain those key properties rooted deep within most tactical games while also offering the player much more. Now that I have two of these types of games under my belt (clearly an expert), dare I say that SteamWorld Heist might be the gold standard in which similar games – that specifically being the 2D sidescrolling tactical RPG – should follow, and the Switch’s Ultimate Edition that bundles in DLC content is likely the best way to experience it. 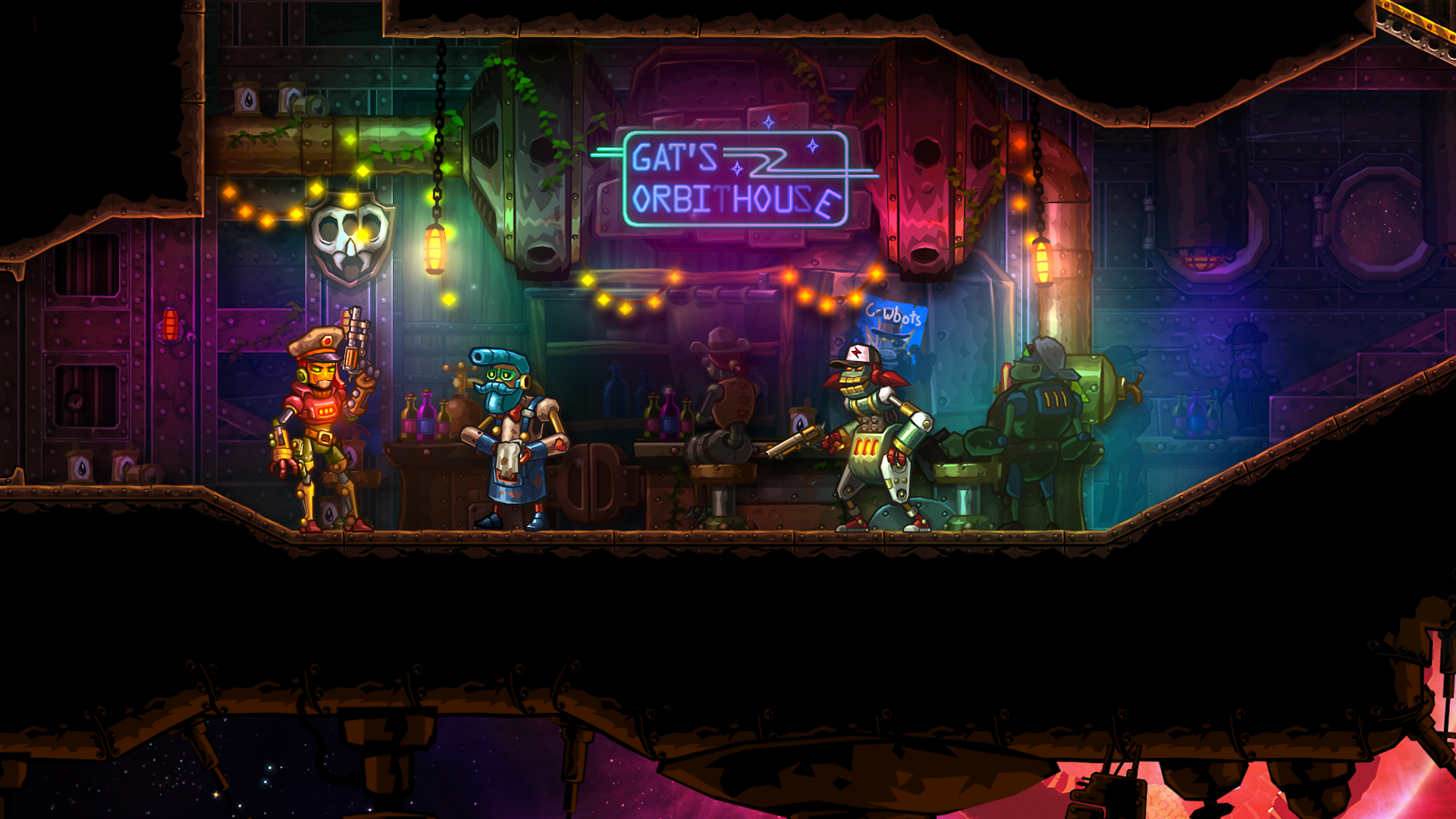 SteamWorld Heist takes place a few centuries after the events of SteamWorld Dig, though actually playing that game prior to Heist is unnecessary. Basically, steambots that once lived on Earth have been forced into space after the planet was destroyed, and you follow the struggles – and achievements – of a small faction of these water-powered automatons across the galaxy.

Donning the captain’s chair as Piper – a takes-no-crap steambot heroine – your adventures take you through all sorts of locations that often have you facing off against hostile steambots, dieselbots, and even alien lifeforms, generally over the finite and dire commodity: water. But the tale isn’t completely centered around high-quality h20 because you’ll quickly discover that long-dormant technologies and lifeforms shake things up, granting potentially devastating power in the hands of the wielder while striking fear in the hearts of just about everyone else. I don’t have to tell you that this could become a problem should the power fall into the wrong hands.

Not all of the destinations are contested however, as safe havens in the form of space bars (complete with vocal performances by Steam Powered Giraffe) and arms dealers are scattered about the universe, offering opportunities for jobs, recruitment, and all sorts of gear…for a price (typically water). Conversations can take place between party members, as well as enemy units, and are delivered via synthesized “robot speak” which adds lots of flavor to the characters and situations. Furthermore, the base plot points of each chapter are doled out in a mid 20th century “radio drama” fashion, which is fantastic.

If you dig sci-fi heavy, steampunk aesthetics, then SteamWorld Heist is your dream come true as it expertly combines the gritty steampunk atmosphere and rugged automatons with vibrant metallic plating and colorful, celestial galaxies. The rock-solid 60 FPS only sweetens the pot, making the game a joy to play and simply breathtaking whether you are hunched over in handheld mode or on a big screen TV, and on a massive TV – wow, just wow. All of these components add up to a story and supplementary presentation that is deep, engaging, and most importantly, fun even though the actual premise is nothing groundbreaking.

SteamWorld Heist is a 2D sidescrolling tactical RPG that is primarily focused around turn-based shootouts which take place across the universe in the form of missions. Upon accepting a mission, you dock up to your destination which can be randomly generated, though the randomization does not apply to your mission objectives. While you can repeat missions for an improved score (based on objectives cleared, remaining party members, and swag collected) and additional money/EXP, I did not find that really necessary on the normal difficulty. That said, I do see immense value in the randomization aspect from a completionist perspective and for those taking on higher difficulties in repeat playthroughs or New Game +.

Back to the core gameplay – shootouts – the player conducts these firefights by aiming freely at targets, so there is no guarantee that you’ll hit your mark if you’re a bad shot. Some weapons have laser sights which make this task much easier, but not all of them do. Additionally, some firearms can use the environment to both their advantage and disadvantage. As you might expect, pretty epic tricks shots can be performed by bouncing off a bunch of things but again, miscalculations – especially with heavy weapons capable of splash damage – can turn a powerful offensive push into a friendly fire disaster if you aren’t careful. 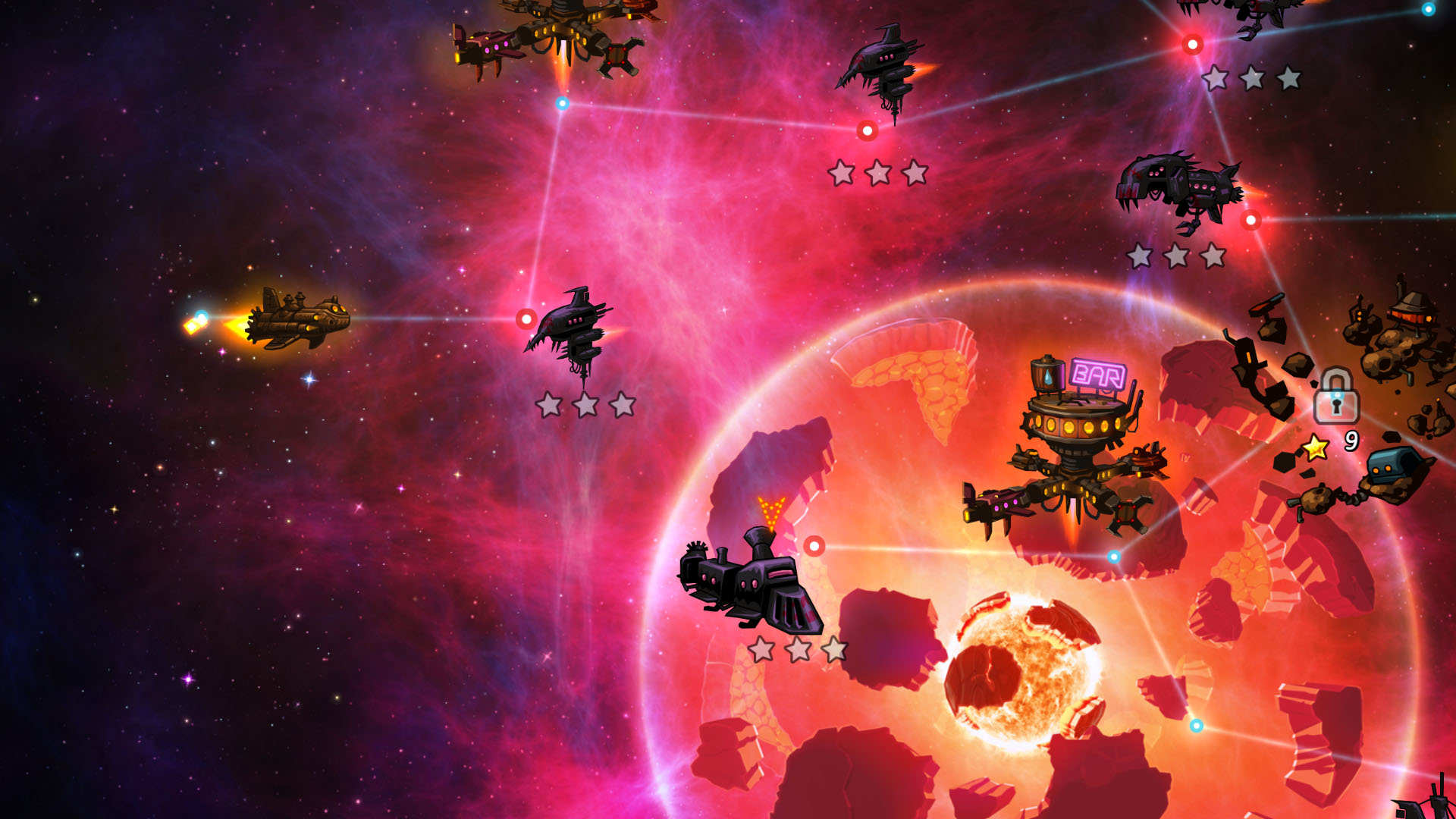 Objectives vary from mission to mission but generally fall within the eliminate, extract, and/or evacuate scenarios, though they are not always as easy as they seem due to special events, such as alarms, that can pop up to throw a wrench or two in things. While this might lead some to beeline each and every mission to avoid as much damage as possible, that is typically not the best course of action because of how loot (aka swag) is distributed within mission maps. Although some goodies will be automatically rewarded for completing a mission, additional loot is frequently scatted about that encourages thorough exploration over getting in-and-out as quickly as possible. Swag ranges from water – the currency of SteamWorld Heist – to all sorts of gear and trinkets.

The size of your active party can vary based on the mission at hand, and each character comes trained in a specialty that determines their stats, firearms prowess, and abilities…somewhat. What I mean is that no two Vanguards are alike in regards to their potential ability list, but they do share an affinity for close quarters combat. Piper leads the charge with her Captain class, and is easily one of the most well rounded units in the game, capable of dealing heavy damage while providing incredibly useful buffs and healing to her allies (like any true captain would). Other characters might excel at picking off foes from afar while some specialize in positioning themselves behind the opposition for flanking bonuses – but remember – no two “flankers” are really the same. The presence of base classes makes preparing for certain missions much easier while the varied traits still allow for each character’s uniqueness to shine through. 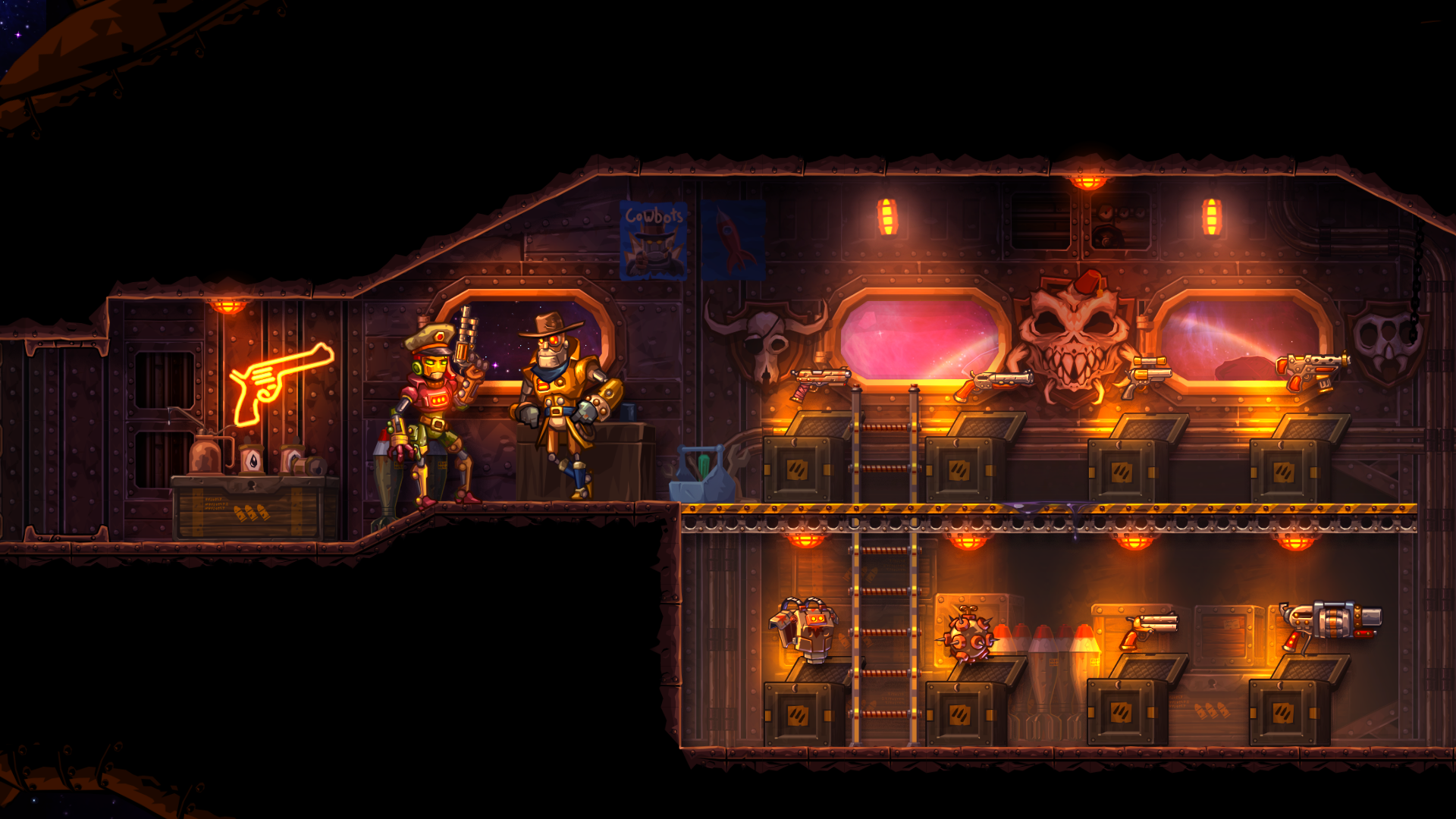 Each character can equip one primary weapon, though secondary weapons and tools are available to all via the three utility slots. Weapons can differ amongst each other through their damage capabilities and functionality, with unique weapons often packing in some powerful modifiers like piercing rounds, multi-shot, and more. Utility gear comes in all sorts of shapes, from the restorative healing packs to bombs, jump packs, and so on. These can be swapped in and out at your leisure before every mission.

Lastly, characters can equip hats, which also happens to be Heist’s massive cosmetic collect-a-thon should you care about such things. Some might argue that they give an advantage in-battle when they fly off a given unit instead of inflicting damage, but I’m not entirely convinced that is their purpose. Active party members that come out alive on the other side of a mission will receive experience points, and leveling up grants them a new active or passive ability – but only that, thus many of these acquired “abilities” can simply be bonuses to health, damage, and movement speed. Regardless, their impact is beneficial even though they may not be the most exciting of things to acquire. 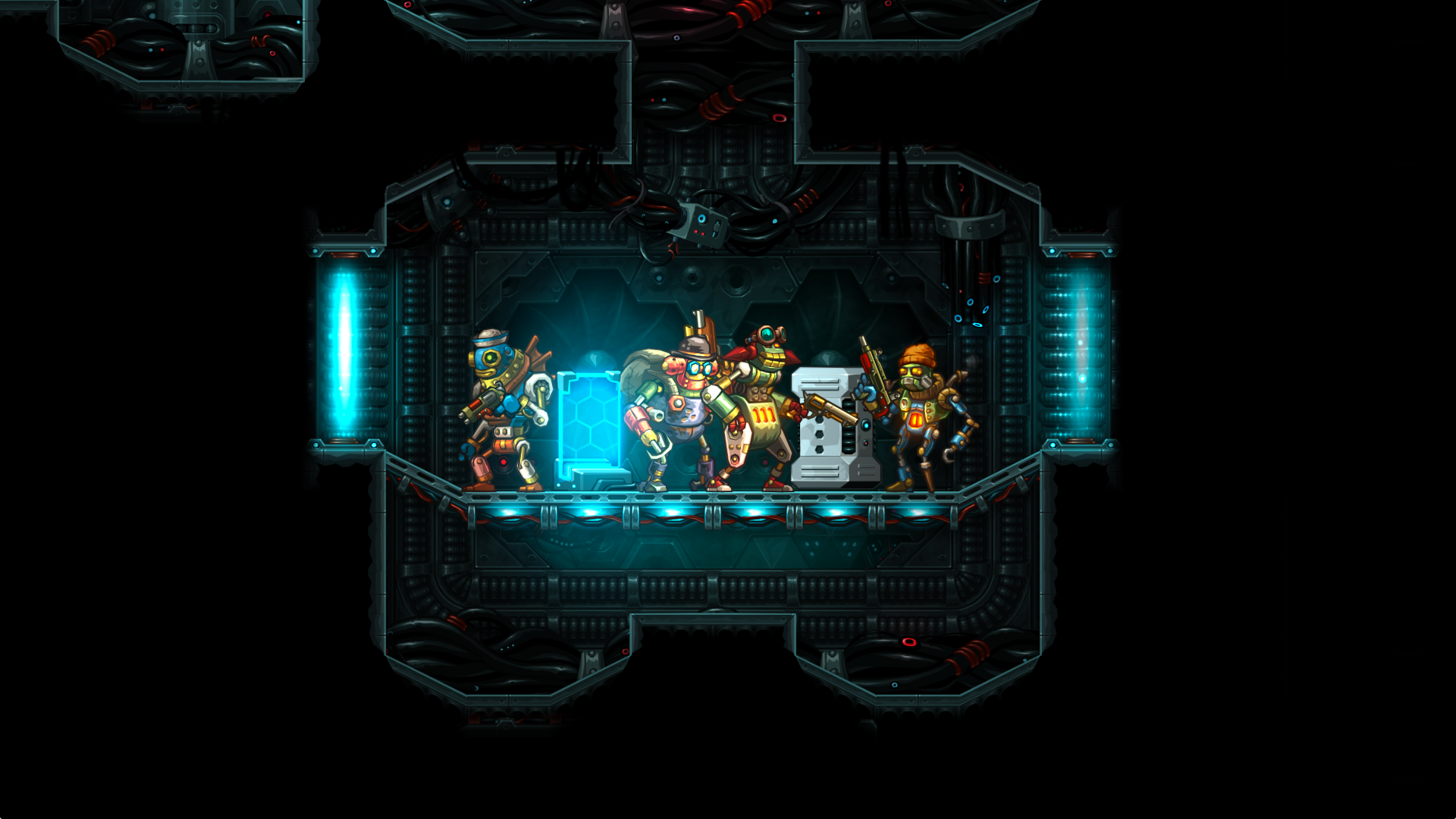 SteamWorld Heist offers five different difficulty levels, so there should be something for just about anyone here. I chose to play on experienced (default, middle difficulty) and did not run into very many issues, save for a couple of missions that turned out to be huge spikes of challenge. However, the difficulty can be adjusted on a mission-by-mission basis, so there’s always the option to drop it down / raise it up a notch if the going gets – or needs to get – tough. Overall, I found that SteamWorld Heist does an excellent job easing you into more difficult content, though you still might be surprised when coming across one of those select few missions that are much more difficult than everything else.

SteamWorld Heist is a game that has left me with no regrets – okay, maybe the fact that I’m kicking myself for not giving it the time of day beforehand counts as one. Outside of that, I really love everything about this game – the sound, look, and feel are just stellar for a modestly priced indie affair. Like steampunk? Play this game. Tactical/Strategy enthusiast? Play it. In it just for the unicorn hat? Whatever the case may be, play this freaking game.