With a four year development cycle and a team of 3 dedicated individuals, Sparklite is finally out on all platforms, including Nintendo Switch. Drawing inspiration from games like “A Link to the Past,” as well as “Moonlighter,” Sparklite has a lot of retro feel with a dash of steampunk whimsy. 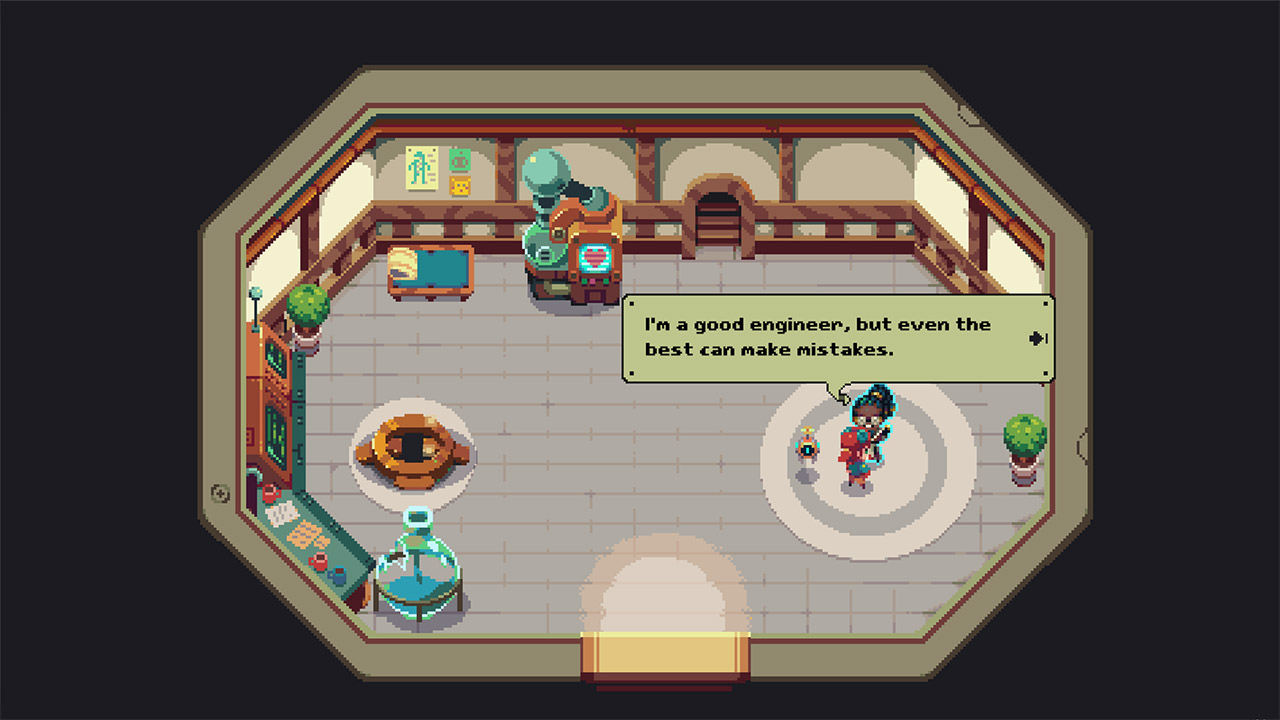 Your journey starts with heroine Ada, soaring the windy skies in her airship along with her robotic companion. Soon, chaos befalls the duo as they hit a particularly rough storm and careen down onto Geodia. While Ada seems to be in one piece, her friend is nowhere to be found, thus she sets off to rescue her pal.

In a dark mine below the surface, you find your lost companion, but it tells you to run, as you’re not possibly strong enough to handle what lurks in the cave with you. Lights flash, and there it is: a steaming contraption full of spikes and chain, engine sputtering endlessly and ready to destroy. Before you can get much damage in, your consciousness fades. The last memory before the darkness takes you? Being lifted into the air and deposited into a soft and comforting place.

You wake in a bed, surrounded by strangers. They’re happy to see you’re awake! You’ve been rescued from the clutches of a Titan, an underling of a man who calls himself “The Baron,” who has been mining Sparklite in vast quantities using the digsites scattered across Geodia. Using the ore to fuel his war machines, his massive mining efforts have blighted the land, causing Geodia to become consumed and corrupted — wildlife has mutated, and Geodia’s only defense has attempted to set back the Baron’s efforts by rearranging the world: the planet’s core of pure Sparklite.

Ada is tasked with traveling the world and shutting down the digsites, putting a stop to the Baron’s efforts and saving Geodia. Along the way, she meets all kinds of colorful characters that help her on her journey. Working alongside others, Ada is able to create new gadgets, power up the existing technology that she relies on, and get stronger in order to take down the Titans and restore Geodia to peace. On her journey, she finds lost artifacts from a civilization long gone, adding an air of mystery to her adventure. Who were these people? Why did they disappear, and how is Ada connected to them? 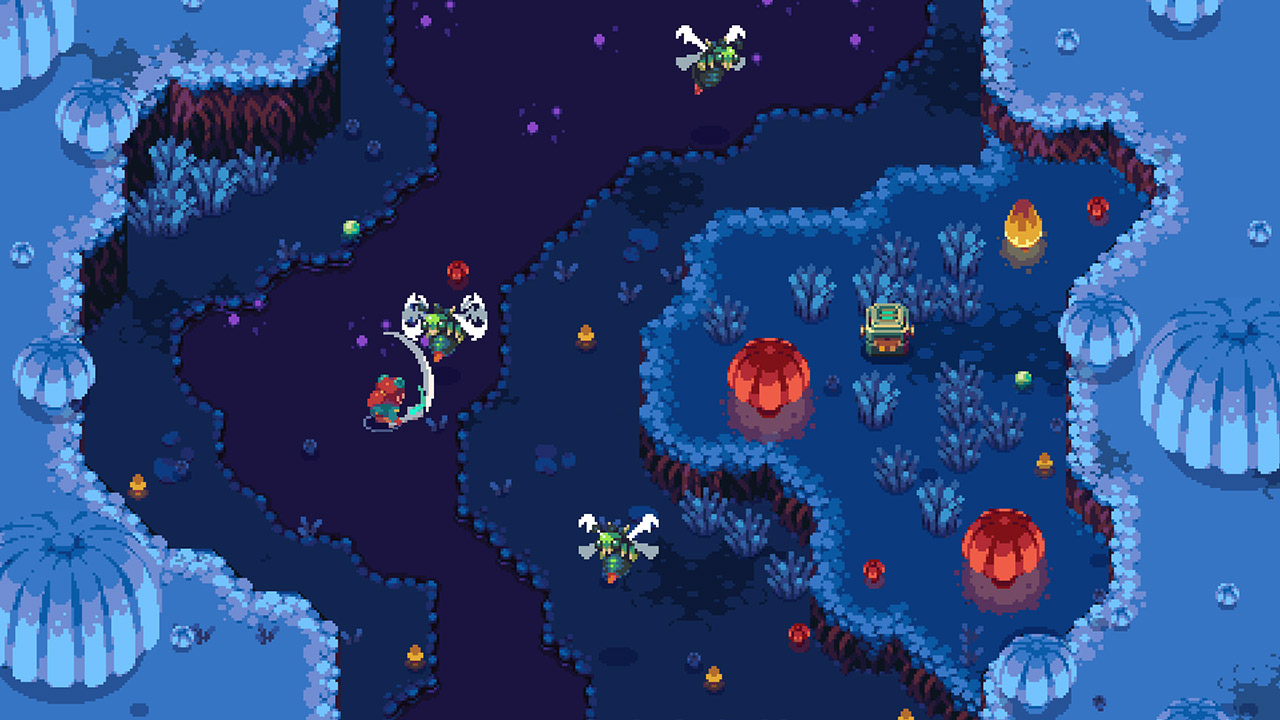 You’ll be fighting your way through Geodia in a top-down action perspective, armed with an arsenal of tools and gadgets at your disposal. Throughout the world are different shrines that give Ada access to ancient tools that she can reverse engineer and recreate for permanent use back in the hub town. Your permanent tools are also accompanied by more temporary consumable gadgets, the likes of which can be acquired through the hub town’s gadget shop, or by opening chests and defeating creatures down on Geodia.

These tools will prove vital throughout your adventures, allowing the player to blow up large rocks, restore stamina and energy, or even light up dark places for a short period of time. Without some of these abilities, the game is a lot harder, so relying on them is absolutely necessary for progression – especially early on, when you have a minimal heart count and get hit for a lot of damage. Lobbing a bomb at an enemy or being able to heal a lost heart is an incredible boon.

The game also allows for a bit of customization with the Patch system. Patches are little additives that increase stats, like stamina and weapon power, but also give you the ability to access area maps, among other bonuses. Since the map changes and you drop all of your consumable items every time Ada passes out, this proves vital when hunting down the game’s strong Titan bosses in order to progress to new areas.

The acquisition of patches to improve character stats can be a long and grindy process, but learning enemy patterns and bashing in monster skulls to farm more Sparklite can be a source of joy for those that like action combat systems. While at first, managing your Patches can be a bit overwhelming, you’re soon able to combine them into stronger upgrades that take up less space, allowing for the use of other upgrades like the triangulation Patches, which help you find things on the overworld more easily. 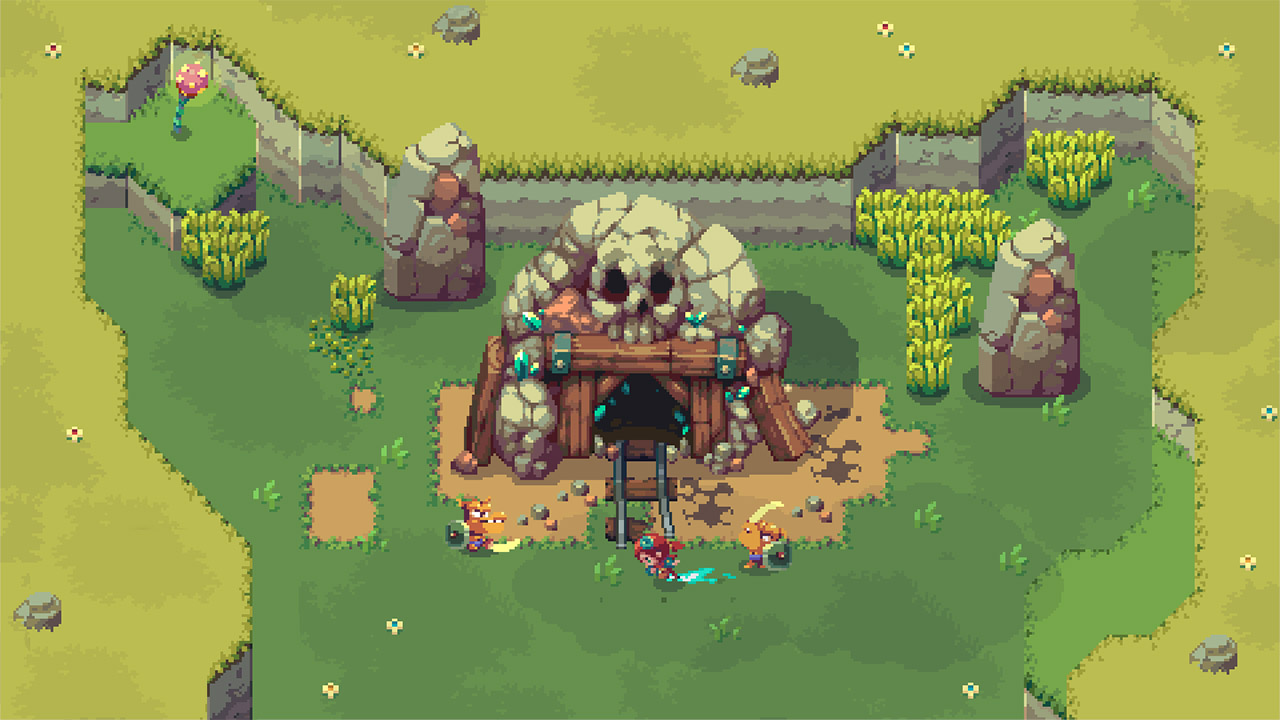 With your trove of Sparklite, you’re able to upgrade the various shops and systems in the hub town — this becomes pivotal to strengthening Ada’s ability to survive on Geodia. The gadget shop will offer more to take with you on the beginning of a journey, the workshop will add more tables to work on the gadgets you discover, and the med bay will increase the size of your patch board so that you can equip more upgrades and head down stronger than ever. The stronger you get, the less damage you take and the more you can dish out. You’ll be able to gather more items, and hit more baddies. You’ll want to fight more to amass more currency, because every time you hit a milestone where you can upgrade a shop or buy a strong Patch, you can DO more! 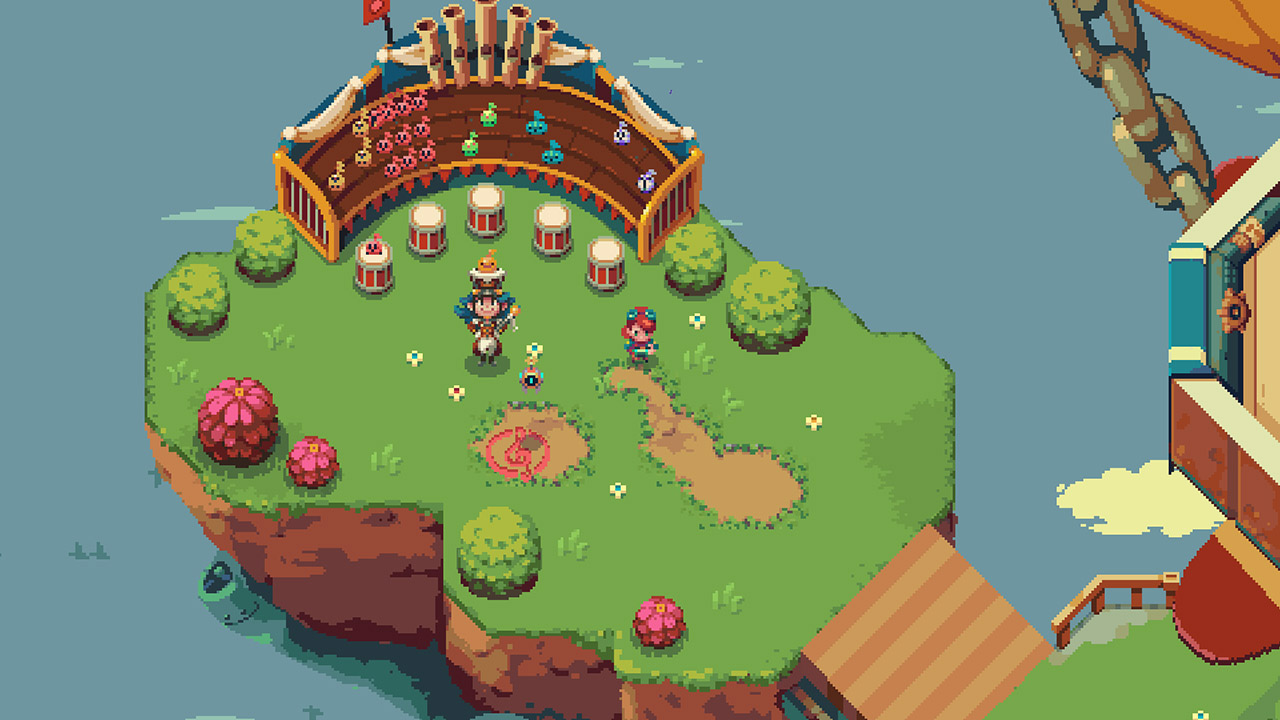 All of the assets for Sparklite are hand-drawn pixel art and animation. This results in lush environments that really pop and feel alive. Each of the five regions encompasses a different biome, such as a flourishing Vineland, an autumn forest grove, a sandy desert with windswept palms, and more. The color choices seem to be carefully considered for each area, with small details scattered here and there that show the destructive history of Geodia, a world ravaged by the greed of the Baron and blighted with rotting vegetation and mutated wildlife.

With the hordes of the Baron’s own underlings skulking around, small dungeons are rife with battle and loot for the taking. All of this feels incredibly immersive due to the massive amount of love and dedication present in both the art style and the soundtrack. Music for this game was created by Dale North, whose work can be found in Wizard of Legend, as well as Puzzles & Dragons x Power Rangers. North has done an amazing job with the sound, adding catchy tunes to every area that give a wonderful sense of adventure to the story. From the Vinelands to the deeper dungeons, each song is carefully crafted to add ambience and quality — I actually started humming the Vinelands tune while whittling away the hours at my day job. 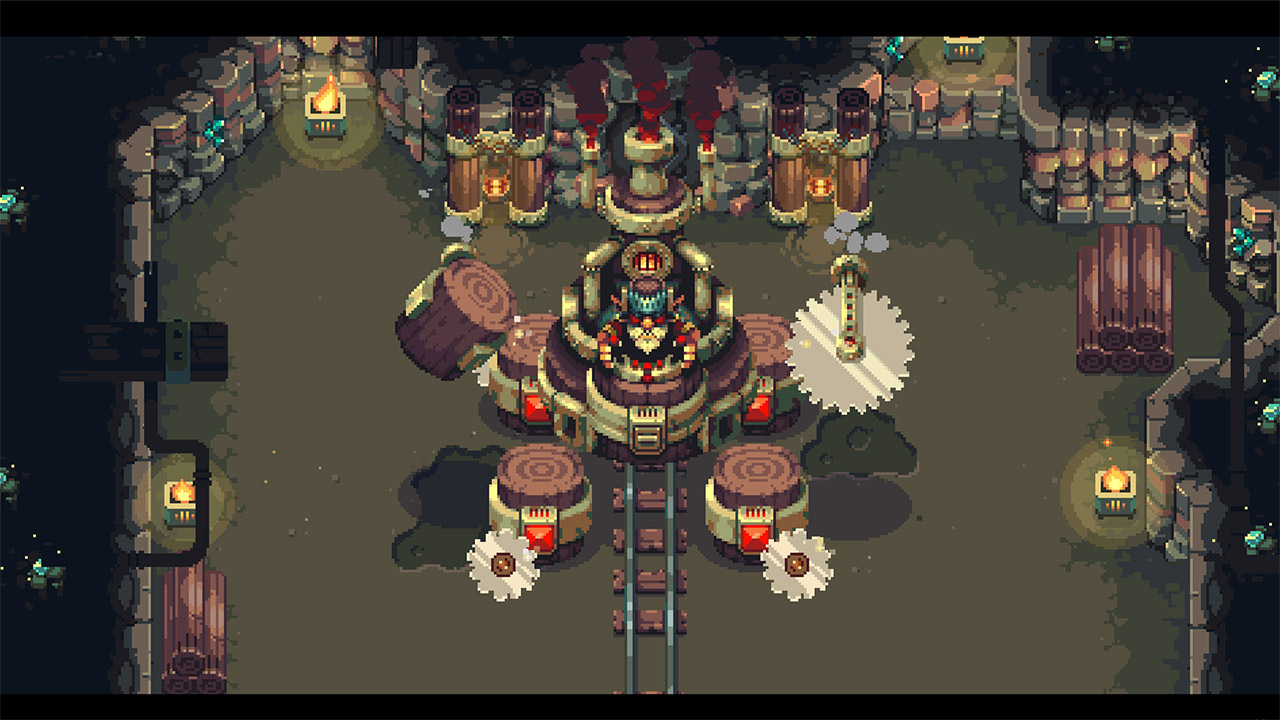 I’ve rode the hype train for this title since its initial announcement, anticipating its arrival with bated breath. A journey to salvage a scintillating Steampunk world from the clutches of a man hellbent on seeing its destruction? Sign me up. While I’ve been disappointed with titles that I’ve looked forward to before (I’m looking at you, Little Town Hero), Sparklite has delivered on my expectations. The combat is clean, the abilities are easy to learn and use, and the world-building is absolutely stellar.

The world and its inhabitants feel very alive, and it was impossible for me not to fall in love with them. While at first I hated that all my items would be dropped upon death, I later appreciated it because I would end up amassing so many of them. The systems in place work together in a harmonious cohesion that many games attempt and fail regularly. The smooth animation for the characters and environments were the first bait that had me hooked, and I’m so glad I let myself be reeled in.

Sparklite is a great example of what’s possible from independent developers. With it’s stunning visuals and catchy soundtrack, it’s hard not to get wrapped up in the world of Geodia. While the base progression of the game can be seen by some as a bit of a grind, I found myself enjoying the slog thanks to the payoff. I never felt like I wasn’t accomplishing something each time I ventured to the world below, and with the Steampunk aesthetic that I personally adore, the world was just as interesting to explore as it was to conquer. I’ll definitely keep tinkering along in the world of Geodia, and I hope that maybe you’ll see fit to join me there.