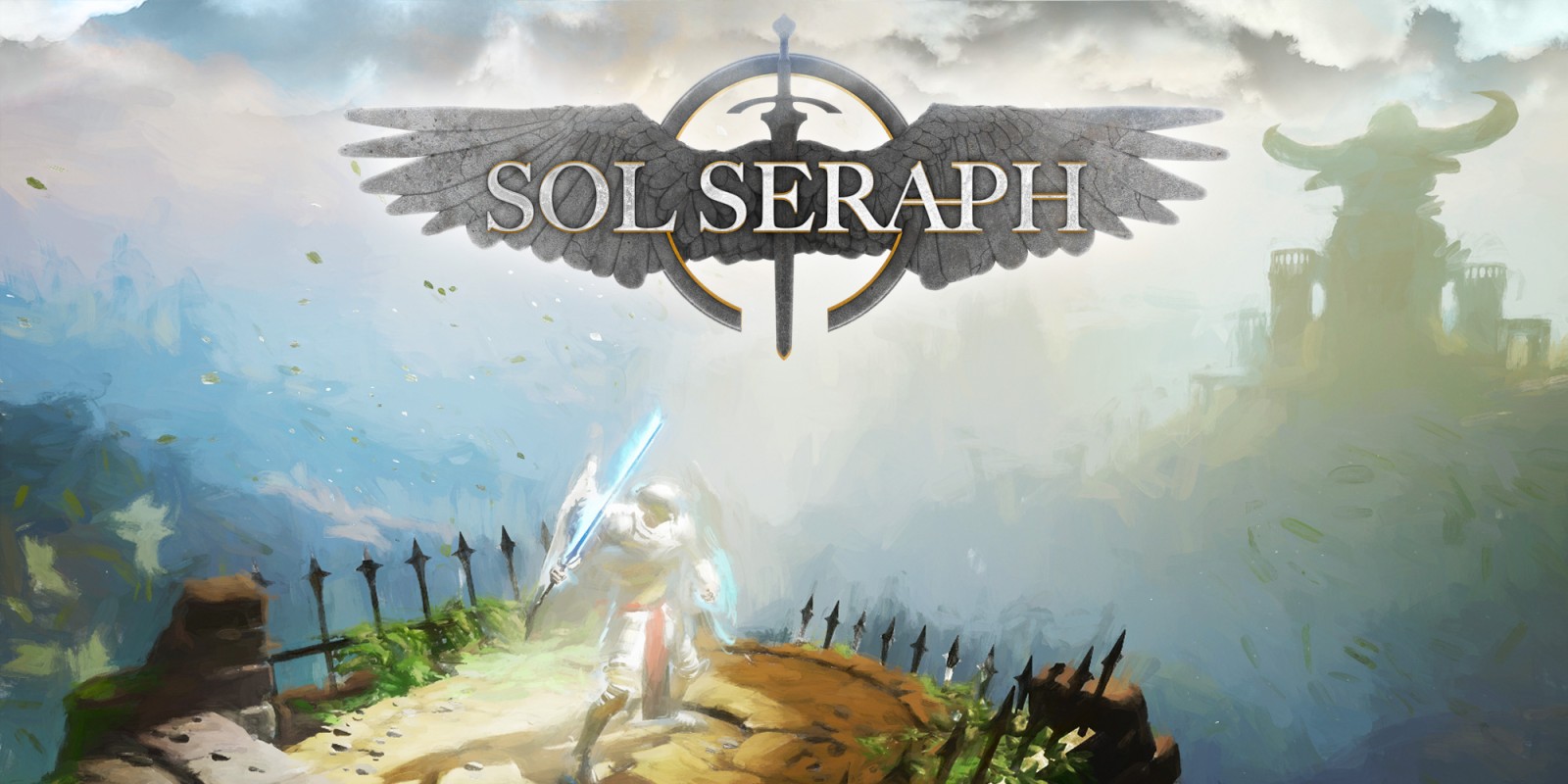 This is a review of ActRaiser 2.

You might be thinking of the SNES game, but ActRaiser 2 on the SNES is a terrible platformer that gets rid of everything that made its predecessor memorable. In other words, it is not worthy of the title. SolSeraph captures that spirit of adventure to create a flawed, but enjoyable title that lays far more claim to the position of “sequel” than the actual sequel.

SolSeraph tells a tale of redemption that has been heard many times before. Helios, a sun god, finds a world full of “Younger Gods” oppressing humans and generally being Chaotic Evil. Being the heroic protector he is, he decides to throw down with the monsters and guide humanity back to self-sufficiency.

He does this via two methods, which comprise the two genres of the game: directing the construction and defenses of a town in a tower defense-style sim, and coming to the ground with a sword and shield for some classic, monster-slaying 2D platforming. Both occur in a world of scattered human tribes, whose conversations during the sim levels constitute the entirety of the narrative. While initially interesting (and occasionally hilarious!), these constant interruptions become tiresome, and at no point are they anything more than incredibly minor world building.

More interesting is the almost shamanistic nature of the scenery and character designs. Most God-simulation titles use Christian or at least Classical Mythological styles for their atmosphere- think temples inspired by the Greek Parthenon, or battles involving demonic overlords. ActRaiser itself pulled this, the PC being “the Master” fighting against the devilish “Tanzra” for the benefit of followers in a central temple. Instead, Helios (ok, Sun God, but…) battles minor gods who have tribal/animalistic motifs and defends a central bonfire around which the tribes gather. The execution feels more like an older brother helping his siblings than an almighty protector smiting his followers’ enemies.

The sim levels are the better of the two gameplay formats. You have a set of enemy lairs that unleash monsters every so often, and you use your constructed defenses, along with two offensive powers limited by a mana bar, to destroy these waves without letting 5 monsters reach your bonfire. When a wave isn’t active, you may attack any lair that is located next to a newly-built temple. The challenge is mainly limited to balancing your resources between building defensive structures and speeding toward finishing lairs; once all lairs are cleared, the Younger God’s lair will unseal. 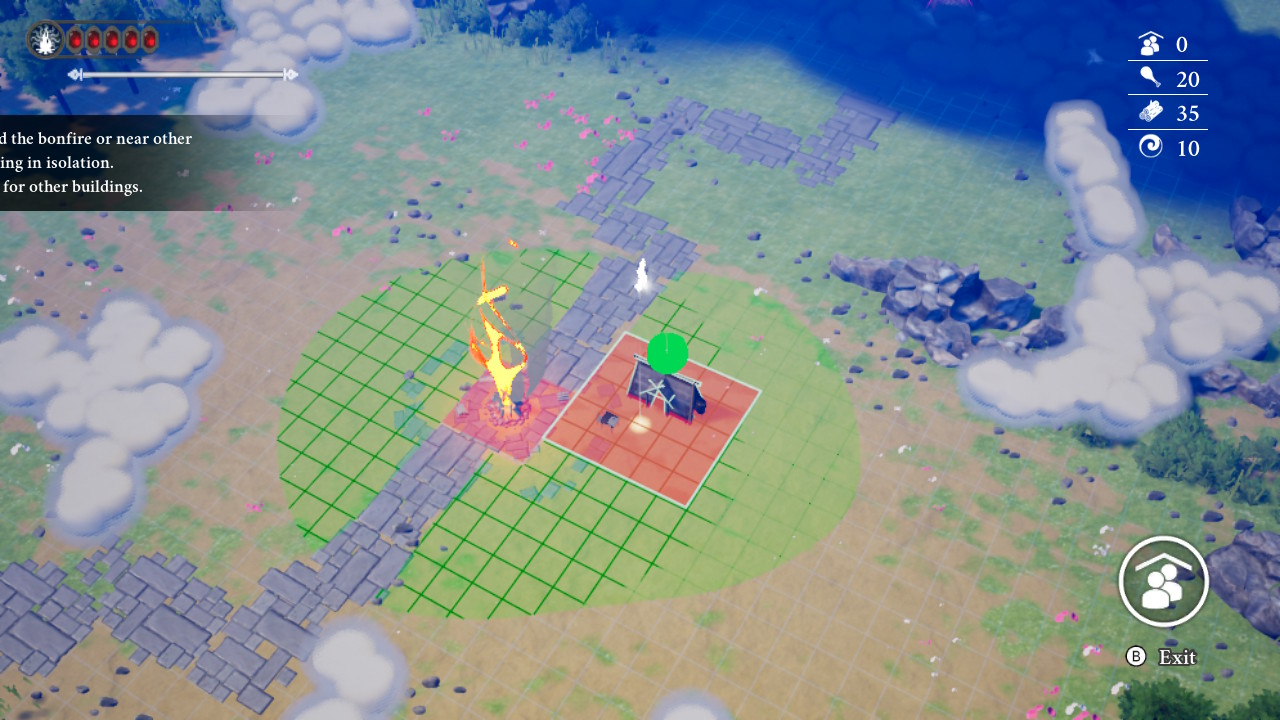 The bonfire is your starting point. All buildings must start in a green area. Buildings expand the green area, though.

The action is fast and furious, though somewhat repetitive. The levels vary the pathing a lot, but monster types and buildings remain pretty similar between them. You’ll use mostly basic buildings, an occasional fancy defense building, and have to contend with a curveball in each level. Nothing overly difficult, but you will need to employ some basic tower-defense strategy. The design decision to keep spawning waves even from cleared monster lairs does make a sense of progress very hard to obtain, though.

Unlike the original game, though, the tower defense sections are nothing more than an obstacle, offering little reward. In the original game, events during the simulation would uncover items and abilities to help during platforming, and population increases increased the Master’s character level, improving durability in both modes. In this game, all improvements are gained by finding items in the platforming scenes, which makes the sim feel less like city building and more like a blitzkrieg. It makes you feel less like a nurturing god and more like a harried battlefield general. 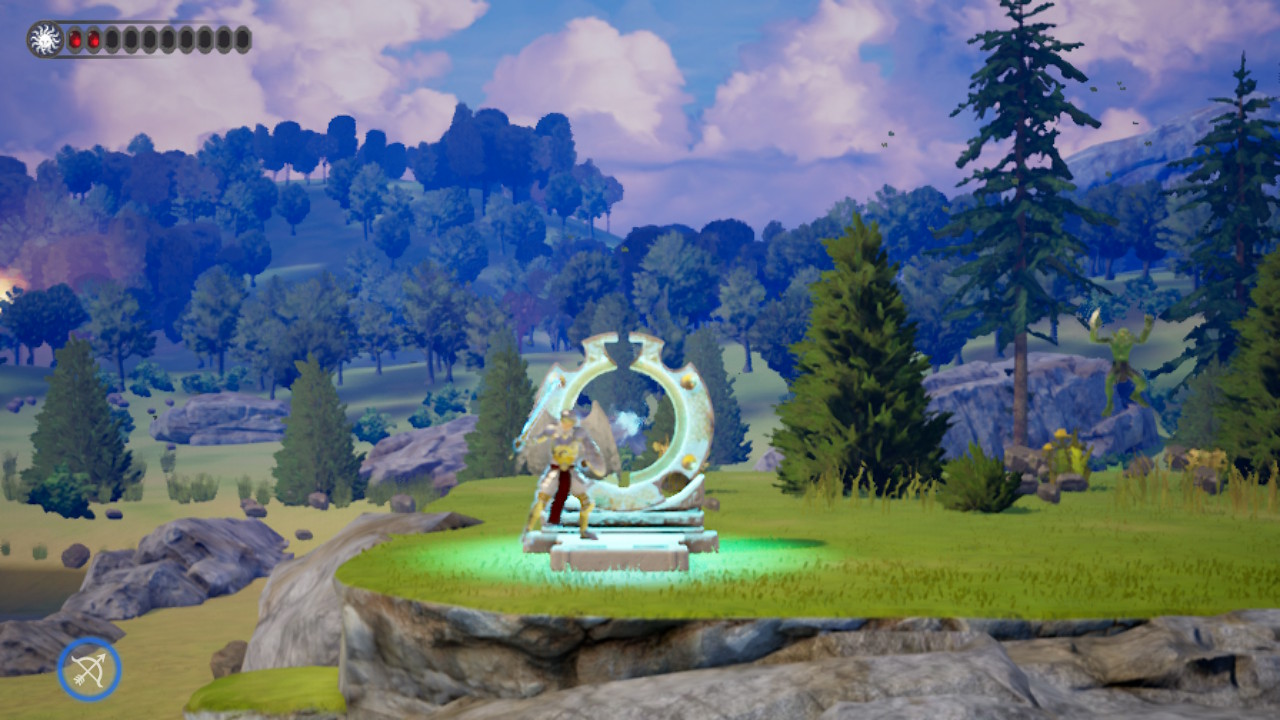 Here’s the world famous Sun God sallying forth in his sword and shield!

The god-like feeling still exists in the platforming sections, fortunately, where you land as a winged warrior of good ready to smite evil in a more direct manner. This, however, is where major flaws creep in. The warrior moves somewhat groggily, as if he is musclebound. This would be fine; the game makes it clear that his advantage over the monsters is strength, while their advantage is numbers. However, he also starts with a pittance of health, and that will not change until you’ve cleared a couple levels. So he’s slow and fragile, which leads to many losses simply because of too many enemies to handle at once. He does have a magic shield which comes out slowly (of course) and blocks frontal attacks… unless it doesn’t. It’s hard to figure out which attacks it will block and which it won’t, and it also sometimes- but not always– blocks the knockback of an attack, so you are never sure when you are safe at a cliff edge or not.

The biggest flaw and worst platforming sin I’ve seen committed in a long time is how enemies enter the field. They can attack from off-screen, which is annoying, though not unusual. But they can also attack from in front of or behind the stage. Since you’re limited to moving only in the usual 2D plane and never get an ability that breaks this rule, any enemies in the foreground or background simply are invincible. What’s worse: those enemies can walk onto the stage, so although it’s impossible to hit them while they’re not on the stage, as soon as their hitbox is active (and it’s near-impossible to judge when that is), they can smack you around. This will often cost you three or four hits while you try to (mis)judge which of the approaching enemies are safe to pass and which need to be blocked or dispatched. And again, no ability, mana consuming or otherwise, exists to help you deal with these creatures. I cannot use the words that I screamed many, many, many times dealing with this extremely frustrating element. This is supposed to be a family-friendly review. 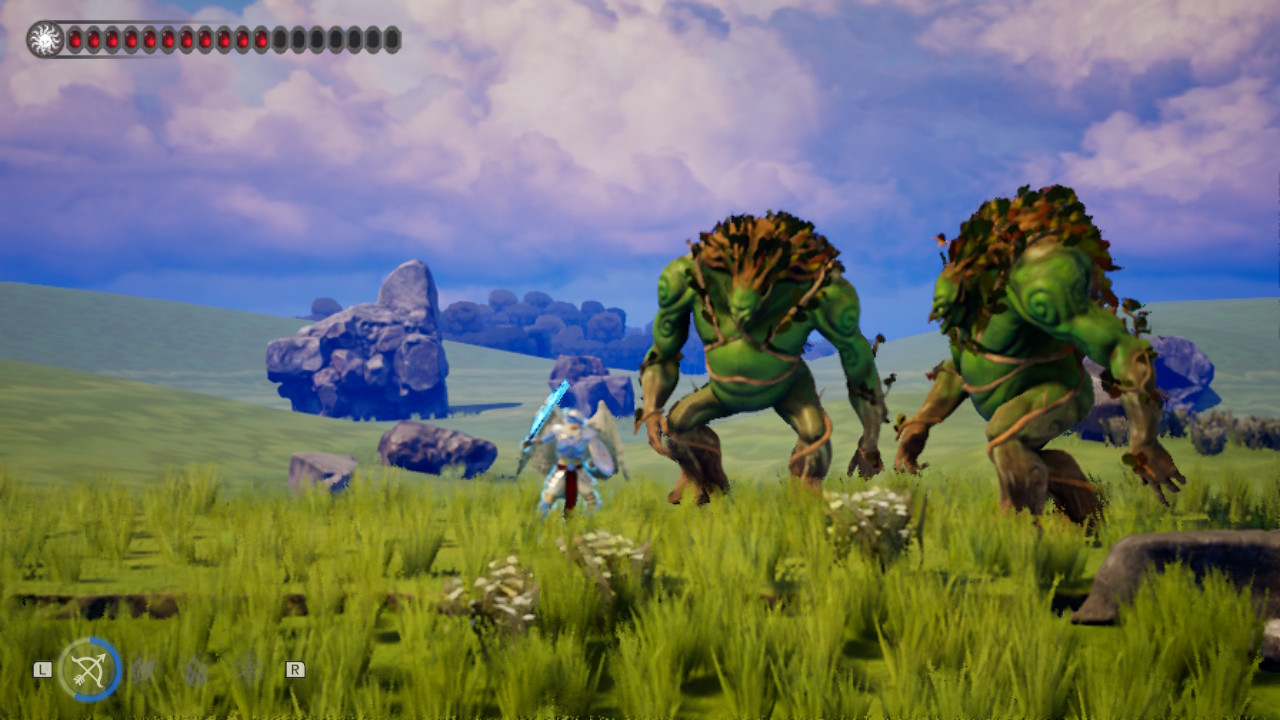 A tame example of the main issue. The troll on the right is active. On the left? Hard to say when he’ll be an issue.

SolSeraph is ambitious. While not stating it explicitly, it aims to recapture the magic that ActRaiser generated when released on the SNES years ago, only with modern sensibilities. And in that, I believe they mostly succeeded. Despite the game’s flaws, the glee I felt as Helios slammed down into a level, ready to charge into battle, rivaled that of the Master’s entrances in ActRaiser. Where the game falters is where most homages falter; they simply can’t recapture the ambience of the original. The sim is fun, but it is only one half of the game. The platforming is serviceable, but major flaws prevent it being fully enjoyable. If you enjoyed ActRaiser, SolSeraph comes across as a nice throwback that doesn’t quite live up to the original. If you have never played ActRaiser, this is a fun but flawed attempt to create a genre-blending game.

Any way you slice it, this game is still better than the real ActRaiser 2. So let’s call it that, shall we…?

Guest editor. 3 and a half decades of gaming and still haven't found the perfect game. Maybe the kids will? Twitter: @CRMagic