Skellboy is an action adventure game developed by Umaiki Games and published by Fabraz. Please join us on Saturday, February 1st, 2020 for an AMA on our discord server with some members of the development team. 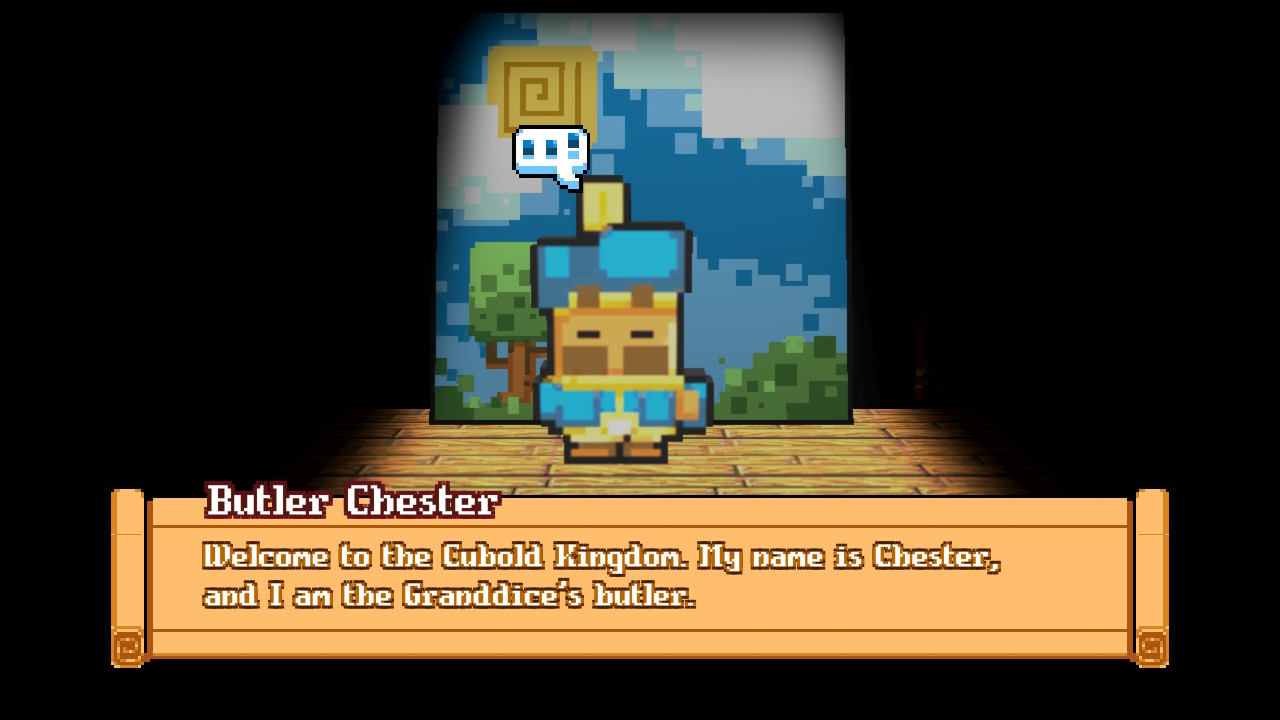 Skellboy’s story is fairly simple. The Kingdom of Cubold has fallen into peril, and an army of the undead- resurrected by Squaruman- has thrown the peaceful existence of the kingdom into disarray. You are Skippy, an ancient hero of the past, also brought back to life by Squaruman. Everything isn’t perfect, however, as our hero is just a skeleton, but that isn’t as bad as it sounds. Sir Squaruman, the king’s evil court magician, was rejected by the Princess Zoletta. Squaruman didn’t take rejection too kindly and put the Princess in her place, so it is now our quest to discover what happened to Princess Zoletta and save the kingdom from Squaruman. The story isn’t as black and white as I just made it out to be, though- as you progress though the game, you will come across points that explain some of Squaruman’s history and allow you see both sides of his story.

The game opens in a theater with our protagonist currently lacking feet- but once you maneuver over to the other area of the theater, you acquire feet that grant ability to jump. You’ll then hop onstage, grab a sword, and set off on your journey to bring back peace to Cubold. Your adventure will then take you to various parts of the castle, such as the sewers, throne room, barracks and more. You will also venture out to the farm, windmill, library and even a beach if you so choose.

If you are looking for an action RPG where you play as a skeleton with interchangeable body parts, look no further. Skellboy plays like many traditional action adventure games from a isometric view point, posessing a fixed camera. As Skippy, you have a head, torso, and feet that can we swapped out for other body parts you find across you adventure, each with their own various perks. For example, at one point you will find a gargoyle body while grants you wings and the ability to glide over large gaps. Early on you will come across red beets, if you pick up their head, you will gain the ability to shoot seeds. This can be especially useful, as it gives you a long range attack in addition to your sword.

Speaking of swords, there five weapon types: swords, clubs, axes, lances & wands. Each have their own perks and some are need to progress the story. In traditional metroidvania fashion, you will come across areas where you need an item to progress. For example, you will see boarded up walls that you can use your club’s heavy attack (holding attack button to charge up) to smash. Doing so will let you access new areas of the kingdom and reach doors. There are lots of doors, and most are locked from the other side, so its a very good idea to unlock them when you’re finally on that other side, as they will provide time saving short cuts later on. The clubs charged attack is also good for taking down the enemies with shields and armor.

Early on in your adventure through Cubold, your quest is fairly straightforward: you’ll explore the castle and open up those previously mentioned doors. After a certain point in the story, you are sent out to the areas surrounding the castle to destroy three chains. At this point, the game opens up and you can choose to destroy the chains in any order you like. You can put that on pause and herd cows if you so choose, or work on any of the other side quests in the game. You can also work on completing your collection of body parts. 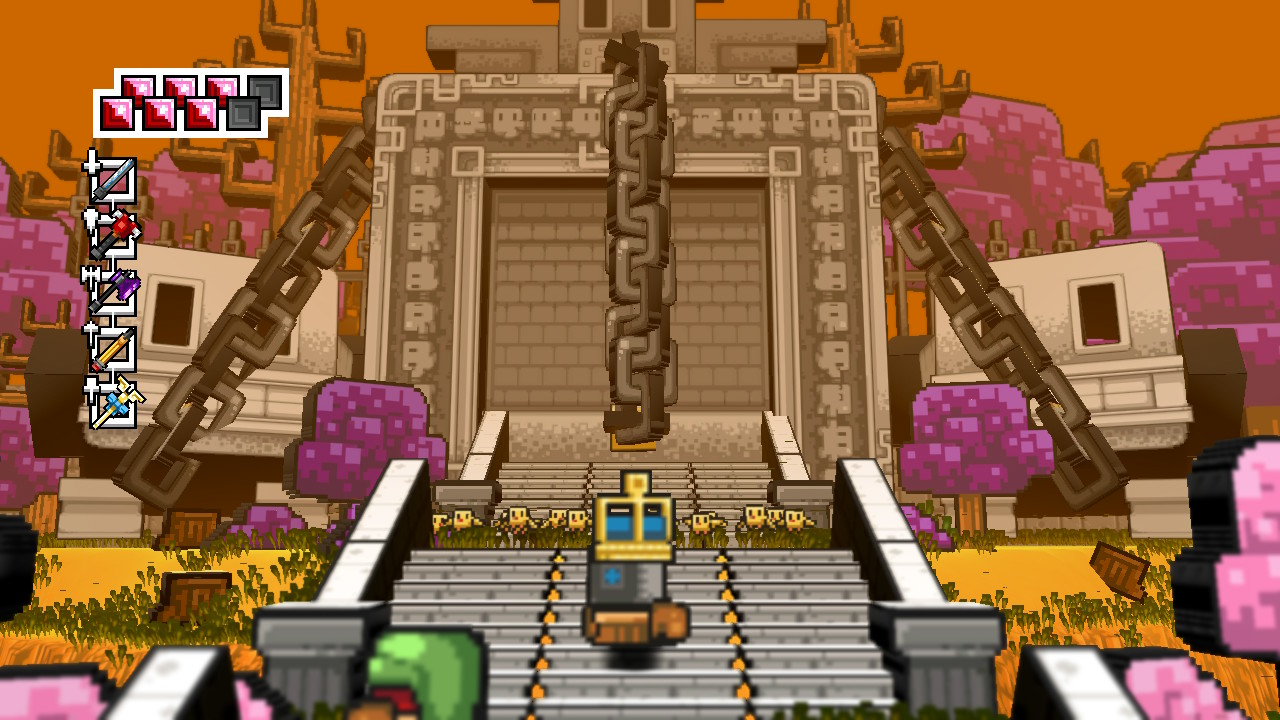 As you traverse Cubold, you will come across save-graves, which are save points where you will respawn should you die. Later on, you will get the ability to open up these save-graves to become your crypt. You crypt serves multiple purposes: first, it’s the game’s form of a fast travel system. Second, this is where you will find every weapon and body part you have ever picked up along your adventure. For the completionist’s sake, not only will it tell you how many you have in total, but it will easily allow you go over and grab the piece you need for a particular puzzle. You can also see which body sets you have a complete set. Some complete sets grant you special abilities, which can be used to access some of the game’s best gear in a side quest. 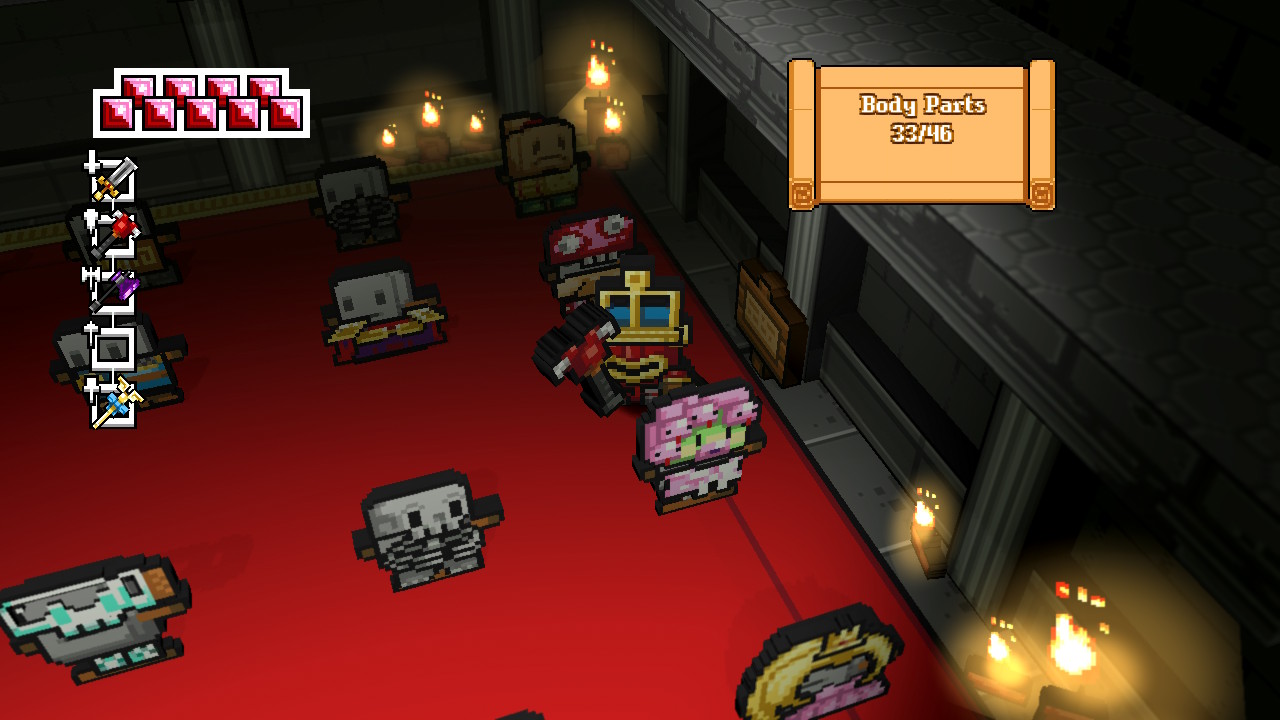 Speaking of side quests, the game has several interesting characters you will meat along your adventure, some of which are totally optional. Early on in your adventure, you will gain access to the safe room. The safe room is kinda like a central hub of the castle, where you’ll find a person who knits if you bring her the proper materials, as well as areas for a hat maker, chef, and librarian, should you find and rescue them. In addition to the safe room, there are other optional objectives to be found specifically concerning the kingdom’s four squires. The four squires are an important part of the story and notable around Cubold, so gathering them into their room can be rewarding for Skippy. 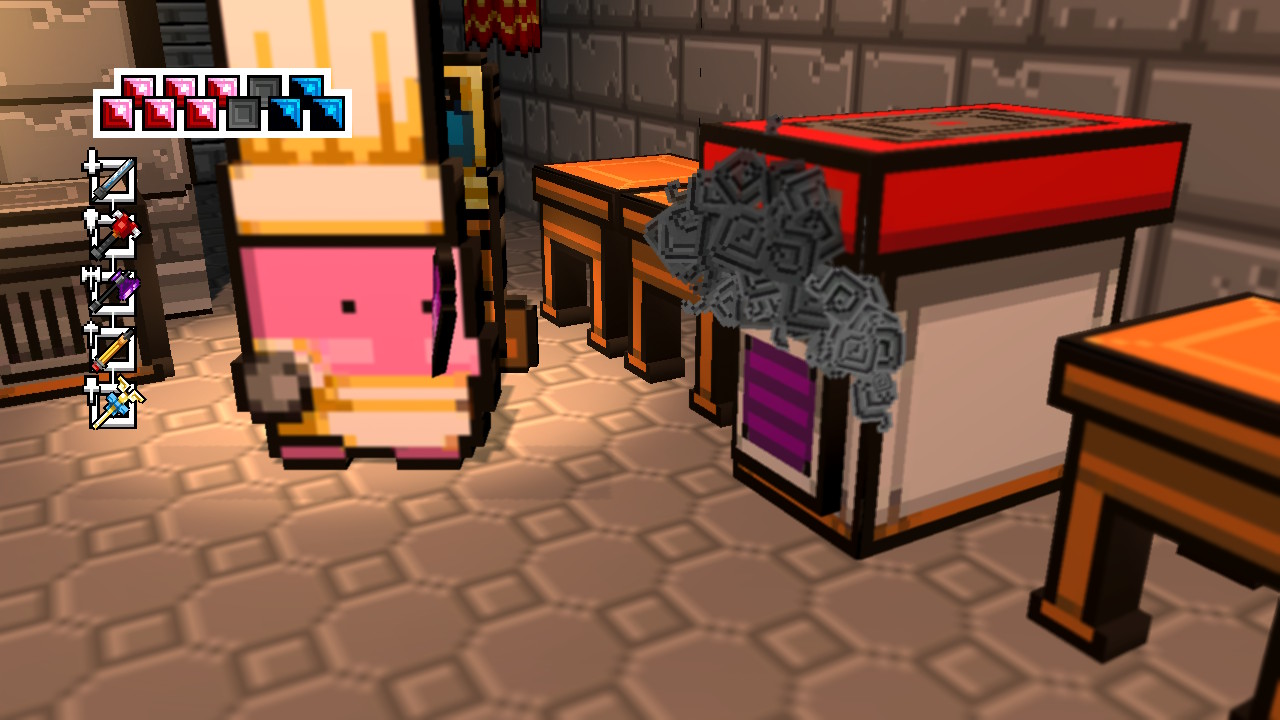 Skellboy beautifully implements the Paper Mario aesthetic, or voxel graphics design choice. The character models aren’t as flat and paper-like as seen in the Paper Mario series, but Umaiki Games has implemented a style that pulls from that game’s roots while being unique its own. Aside from the wonderful gameplay and art design, the sound track for the game is also very good. They have choose to use a chip tune style reminiscent of games and cartoons of the 90’s. Its very upbeat and keeps pace with tone of with the rest of the game.

Skellboy does have some technical issues of which the developers are aware- they have told me a patch is in the works. The patch should be out shortly after release and will address some of the issues I experienced, while adding some quality of life features for the completionist looking to 100% the game. The game is playable and enjoyable in its current state, but there are some performance issues: when you transition between areas of the map, the game will freeze or stutter for a couple seconds. In addition, you may notice if you hit an enemy on a fence or wall, they become still and unresponsive. They also won’t disappear upon death as they do regularly, instead remaining still until you knock them off the object.

As a warning, I did run into a progress breaking issue, which the aforementioned patch will address. To keep this as spoiler free as possible: when you get a certain crown in the sewers, do not walk back to the spot were you originally enter the area, as you will lose the crown, which is needed to progress the story. 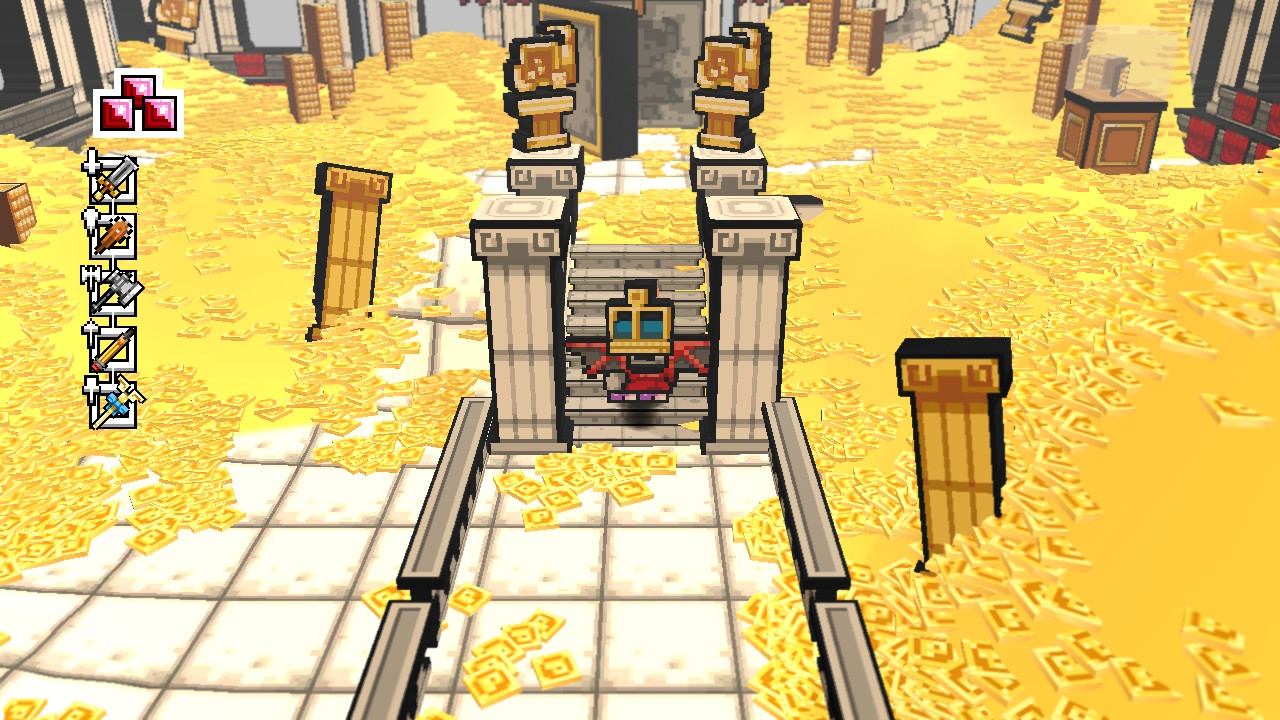 All in all, Skellboy was an enjoyable experience. If I were to attempt to describe it, I would say it’s a paper-zelda-vania, and while in its current state it may be a little rough around the edges, I did have a blast playing it. For now it definitely fills that vacancy of a good Paper Mario game not being available on the Switch (I would gladly welcome a Thousand-Year Door remake). The developers plan to add some additional content after the patches and PC release are ready. Skellboy, despite its shortcomings, is an adventure with charm and humor, which definitely makes it one worth taking.