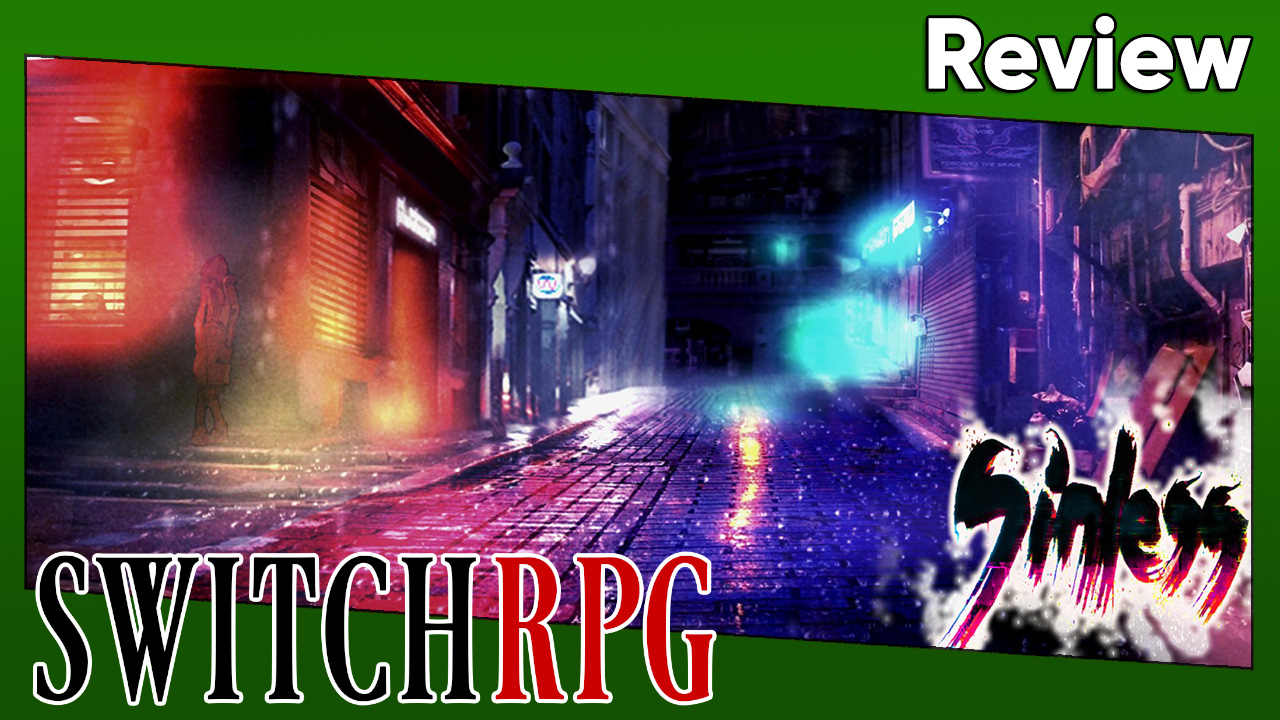 Escalators and tall windows surround you in what looks to be a construction site. Stray wires litter the area around you; is this a shopping mall of some sort, or is it destined to be some other kind of facility? You’re not even sure how you ended up in this place to begin with, but it seems that down is the only way out. On the way, you meet an odd individual who offers you a strange substance — but before you really have time to make heads or tails of things, you’re awake in your bed starting a new day. Was it all just a dream, despite feeling so real, strange, and unhinged?

In Sinless, you live in a futuristic society in the clouds, a world where society’s only choice was to build upwards into the the skies. These civilizations became megacities, people on the surface living life to its fullest enjoying the cities’ amenities and beautiful skyscapes. The lower sectors seemed to be deigned as slums, but what united all the people in this dystopian world was the constant policing of their lives. Everything you do is designated by Progs, cartridges that one must install in order to interact in the world outside of their own homes. These progs seem to be inserted into a body-modification of sorts, and citizens must use them properly depending on several factors: Are they working? There’s a prog for that. Are they off for the day and want to explore and mill about the city? Casual prog had best be installed, or you’re gonna get incarcerated faster than you can blink if you step outside your apartment building.

The small details and nuances of this world really meld it all together into a believable and immersive experience, right down to the trippy electronic grooves playing in the background. This world breathes on its own, and its something that feels lived in and not at all manufactured — except that it is. This high rise city is cobbled together with wires and steel beams, laughing at the uninhabitable ground below as it sticks it to the idea that humanity must rely on solid earthy ground. The different districts are aged and distinct, each with their own unique areas and charms that feel as real as the town I actually inhabit. 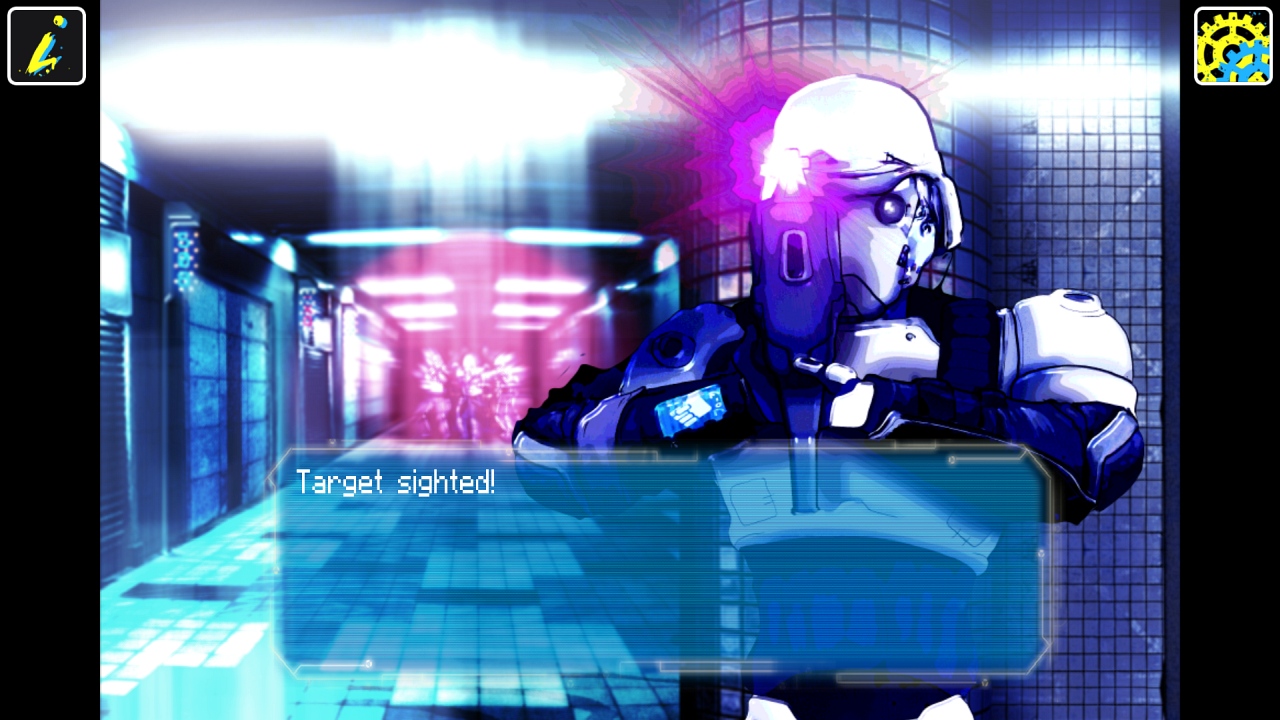 Well hello dystopian police person. I am sorry I didn’t put in the necessary behavioral chip to be allowed to exist in this place today. Please don’t drag me to cyborg jail.

Gameplay is mostly point-and-click, with puzzles and minigames to complete to break up the monotony of exploration and adding to the charm of the world. The game does take advantage of the Switch’s touchscreen, allowing you to really speed up your exploration. While you can play in docked mode via JoyCon, it feels incredibly slow and clunky to do so. In fact, during one early puzzle sequence, the timer for the encounter made it absolutely impossible to complete with the analog sticks, and I had to undock the Switch to complete the puzzle on the touch screen in order to move forward. This wouldn’t be the first time that I’d have to do that, with each time being just as annoying.

There are a handful of sidescrolling beat-em-ups peppered into the story in the form of minigames that can be played on the in-game phone. These bite-sized experiences were quick and difficult, but honestly very enjoyable. I found that they added to the flavor of the world of the game, and despite being fairly hard, weren’t really a detractor at all in that playing them is generally optional, outside of a few introductory sequences.

The one complaint I often found myself having was that the bright light effects made it difficult to navigate around the different areas. With so much white light on top of a dark and contrasted world, it was hard to find paths and places to click on due to the incredible amount of brightness. This would be another reoccurring issue throughout my playthrough, which more than once had me suspending the game out of frustration. 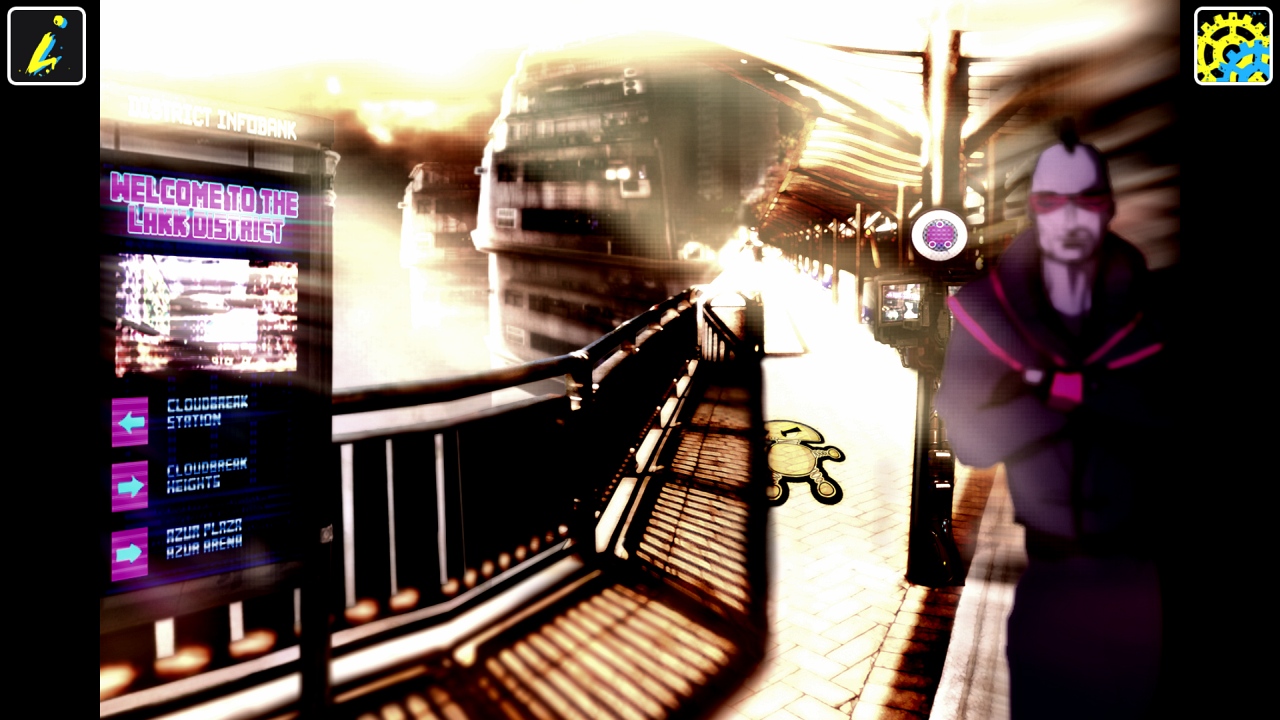 Do you like your worlds to have ten or less colors due to light pollution? Well you’re in luck.

Sinless is a short story with no real point in revisiting once you’ve experienced it. While the art style was absolutely stunning, it actually impeded exploration and gameplay more times than not. The difficult control scheme caused a myriad issues in docked mode, forcing me to have to play some sequences in handheld in order to use the touchscreen to move forward. The narrative itself was very well done, but also something that I feel would have been better off as a visual novel instead of a full game. The Cyberpunk world is absolutely amazing and well fleshed out, but I feel it would be more captivating in a different genre altogether. While I can’t say you should avoid Sinless at all costs, I will say that unless you really like cyberpunk, catch this on a sale. The story is definitely good, maybe even great, but the issues with controls and lighting make it hard to navigate.