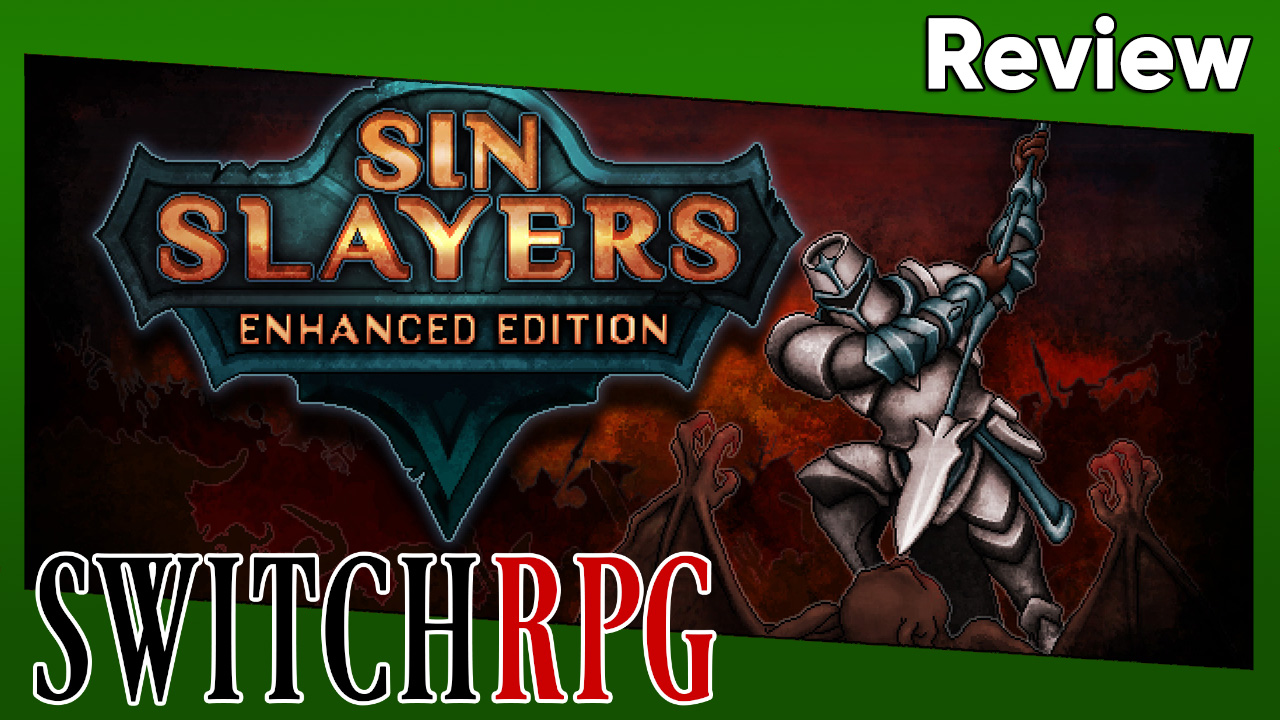 Procedural generation has taken the indie scene by storm, allowing developers to implement near-endless amounts of content with the basic building blocks of their level and enemy design. While this sort of system might seem more at home in roguelikes, the oft-synonymous dungeon crawling genre uses it for very a very similar purpose: as long as you don’t know what it is precisely that you’re jumping into, you’ll remain on your toes and engaged in gameplay as you push deeper into enemy territory. Obviously, many roguelikes are built with the foundations of dungeon crawling in mind, but that doesn’t mean the two genres are one and the same. Many games will use this sort of structure for environment design so that they can focus more intently on the meat and potatoes: party and character development systems.

Sin Slayers is one such title. Though it doesn’t push the envelope in any specific ways, this isometric, pixel-art dungeon crawler is fully ready for you to grind your heart out against the demonic manifestation of the seven deadly sins. Darksiders III this ain’t despite their similar premises, and if you’re up for one hell of a marathon, strap yourselves in for a game that’s all crawl and very little downtime.

Sin Slayers has players crafting parties of three from a sizable collection of ten class-based warriors as they take on a series of dungeons in order to defeat the aforementioned demonic Seven Deadly Sins. Though your party options will be extremely limited at first, they’ll expand as you explore more parts of the map and complete side quests given to you by the current residents of your home base, a hallowed church that serves as literal and figurative sanctuary from the dangerous realm beyond.

This hub is where you’ll do a great deal of customization, including managing your party, speaking with various members regarding additional quests and tasks, smithing new items and equipment, and leveling your character. Although you can accrue experience points in-dungeons, you cannot level up until you’ve returned to sanctuary, which is often an incentive for ending one of your dungeon excursions early. If you want to be as efficient as possible, you’ll need to warp back home with relative frequency. This matters largely because items collected and character experience are fortunately maintained upon leaving a dungeon, but progress in every other way is reset, meaning you’ll need to fill in the dungeon map all over again. This also means you’ll reset all enemy encounters for a map, so if you don’t feel capable of tackling the next act of a dungeon just yet, multiple resets are always beneficial. 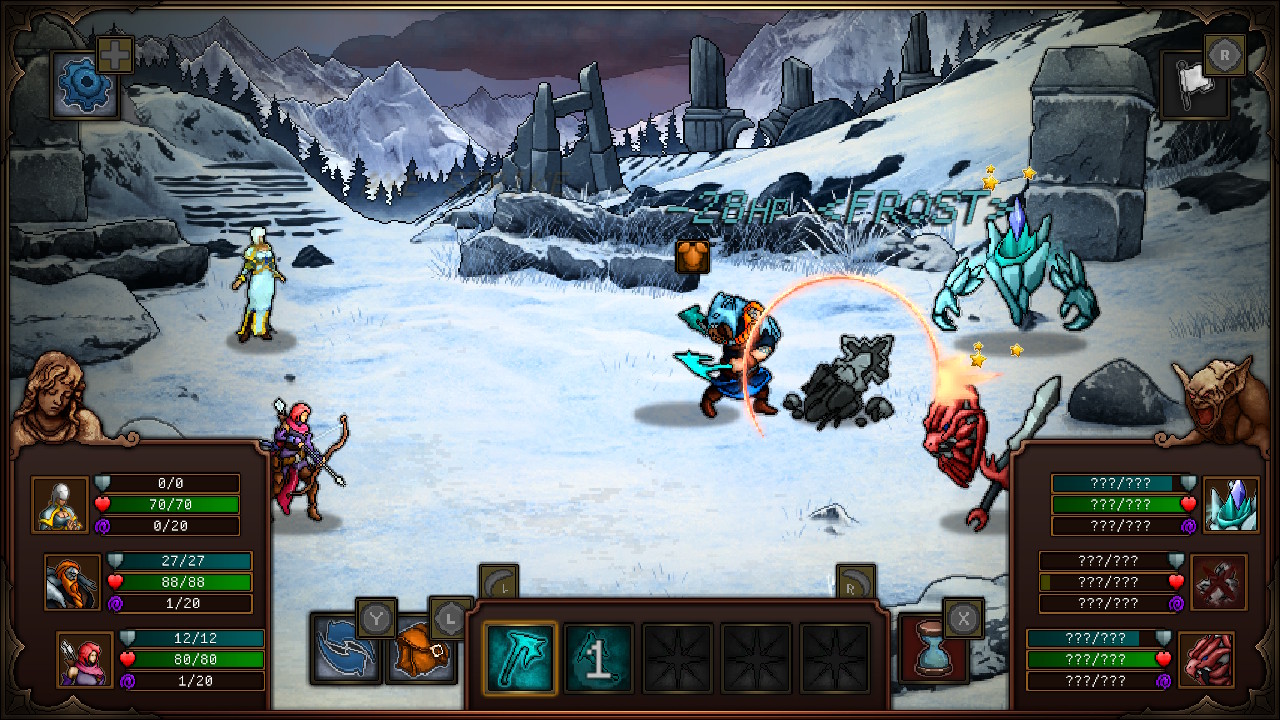 The reason map progress is reset is because maps randomly generate each time you enter into a dungeon, and all of the event and hazard markers within are randomly redistributed throughout the map. While traversing the isometric grid maps, you’ll have the chance to encounter event spaces, such as a teleportation gate, traveling merchant, and several in-dungeon side quests, though the last of won’t reset after being completed. Additionally, you’ll find a number of “moral choice” spaces, where you’ll need to decide whether to search a dead body or desecrate a grave at the risk of raising your Sin level, a central combat mechanic.

The more sin you and your party have performed while in a dungeon, the harder enemies will hit, which means you generally want to avoid these temptations. Only generally, however, as choosing to forego searching these areas will actually negate your Sin level. Sin can be generated based on specific dungeon paradigms based around the nature of the headlining Sin, such as raising your Sin level each time you consume an item, or spending too much time (i.e. wandering around) a level. If you simply avoid most Sin-based encounters, however, you won’t have much of a problem.

Combat is turn-based, pitting your team of three against an opposing squad of one to three enemies. Special abilities revolve around an action point system called Rage, where taking damage and dishing it out with specific movies will generate more points, which can be used to execute attacks with stronger capabilities. Many abilities are percentage-based, offering a special qualifier depending on luck, but outside of these few folds, combat is very straightforward and rote. Weapon and elemental weaknesses exist across enemy types, so keeping them in mind is important, especially because enemies (and allies, for that matter) have both a hit point and armor point number. You won’t find many other unpredictable elements, unless you decide to punish yourself with a high Sin level.

It’s tough to find a point of comparison for Sin Slayers’ aesthetic, as the mixture of its isometric elements and character spritework mesh extremely well while possessing qualities unlike most other games. The structures used in environments often give off a somewhat faux-3d appearance the more they are based on human designs, but in-combat backgrounds are atmospheric and carefully designed to allow for all characters to be displayed. The character sprites themselves are… well, it’s hard to call them generic, as many iconic role-playing classes are represented here with the specific exaggerations of the artist present. But their static poses and faceless designs have a strange charm to them that feels comfortable and slightly uninspired- though the same could be said for the game’s writing, itself. 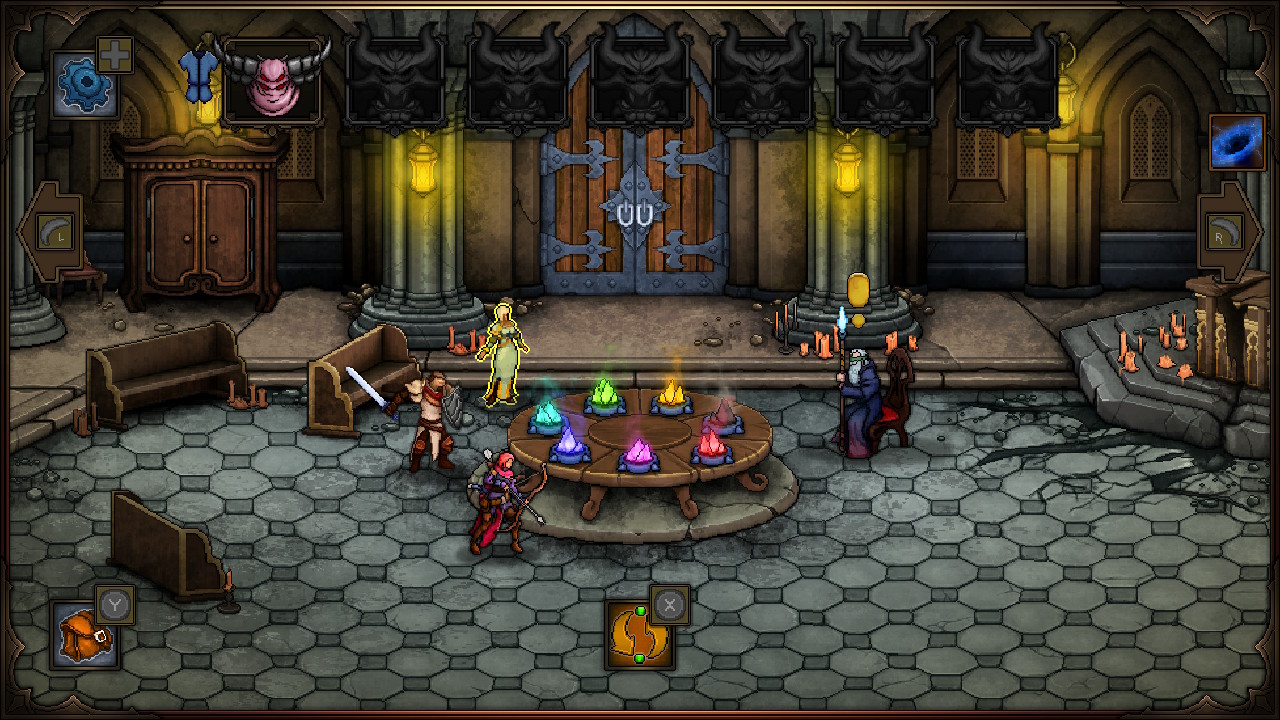 The narrative is established at the start of the game and barely expand upon after that point- ten heroes are transported to a dark valley, home to the demonic manifestations of the Seven Deadly Sins. In order to escape, they’ll need to defeat these demons. When voice-acted, the narrative does offer a more palpable sense of gravitas, but most of the dialogue, which is presented in a text box at the center of the screen and flips between speaking roles, is uninspired and sterile. This is likely due to the homogenization that comes with any game translation, as the developers are Russian, which results in some odd jokes falling flat and some fairly standard character interactions. Nothing is particularly standout in this department, and the same goes for music. While the blend of instrumentation is very unique and gels smoothly with the rest of the game’s aesthetic, the tracks repeat with frequency in the rotation and in length.

There’s a dedicated camp of individuals who enjoy what we call “comfort food” in this genre- games with basic combat mechanics, blasé narrative structure, and persistent reward loops that encourage a sense of growth without much mental engagement. I hold no ill will towards these people, and would gladly offer Sin Slayers to them as a potential purchase. Outside of its aesthetics that are wholly unique while still feeling uninspired, the experience you’ll be having at the start of the game will remain consistent throughout, especially if you avoid most Sin event encounters. Some characters have field abilities that you’ll want to bring with you in order to make certain tasks easier or more avoidable in dungeons, but these changes to the party rarely feel effective in dungeon traversal, having a much stronger effect on combat than anything.

If there’s one element that takes some getting-used-to, it’s the control setup in combat, which is centered around menu selection via the shoulder buttons. It feels odd when you pull up a command for the first time, and despite the action eventually becoming second nature, it still takes a dedicated effort to mindfully execute. What is also bizarre are character classes whose abilities cannot be used during battle when their party members do not need them, often making their turn feel superfluous. The composition and order of units in their combat formation apparently has some effect on enemy targeting, but I did not see any marked difference in this while playing. 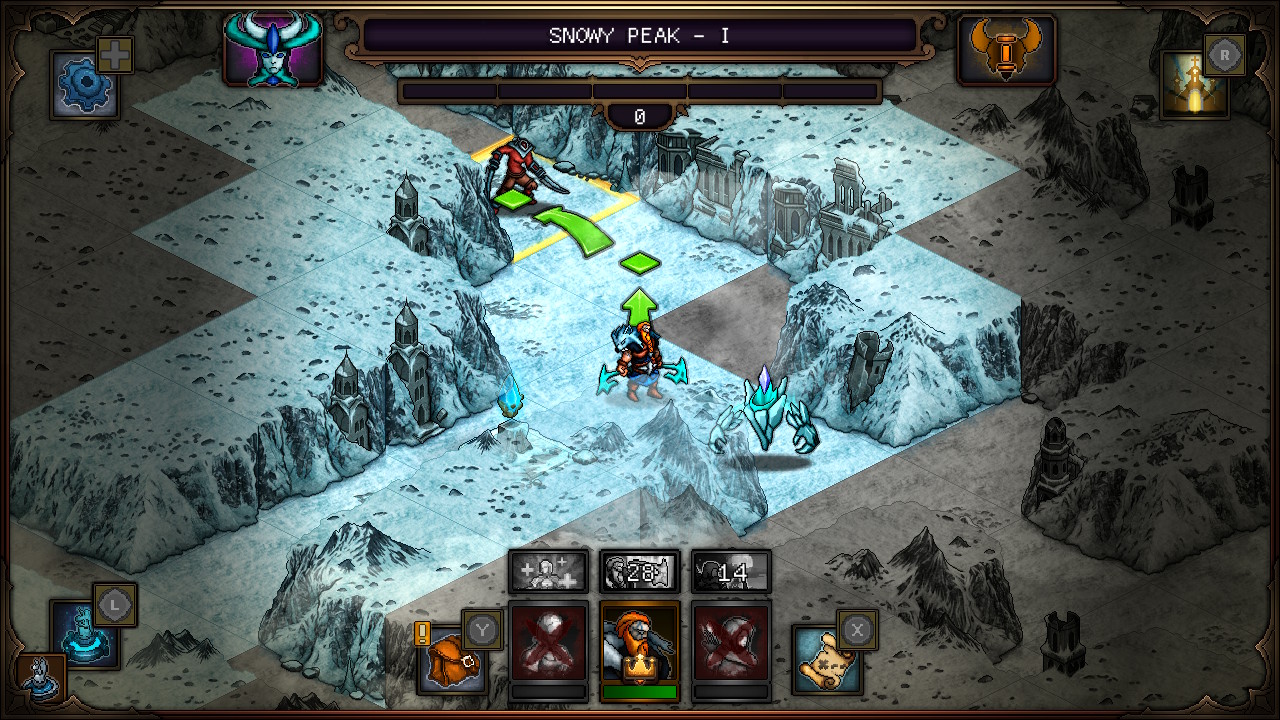 If you’re fond of grinding copious amounts of materials and experience, I’d say that Sin Slayers is likely the game for you. While each dungeon has a few “tiers” of completion required before facing their respective bosses, these can and should be replayed multiple times. This is partially due to the high material cost of smithing and the manual level upgrades required back at the home base. Though not an exhaustive experience, there’s enough variety in enemy gimmicks, character classes, and environmental aesthetics to keep one engaged. If its central Sin mechanic doesn’t appeal to you as a form a of variable difficulty and the character classes don’t wow you al that much, I’d say you’re better off looking elsewhere. As it stand,s Sin Slayers is a very competent, comfortable RPG that doesn’t push the boundaries in many ways, yet offers a substantial amount of dungeon crawling.