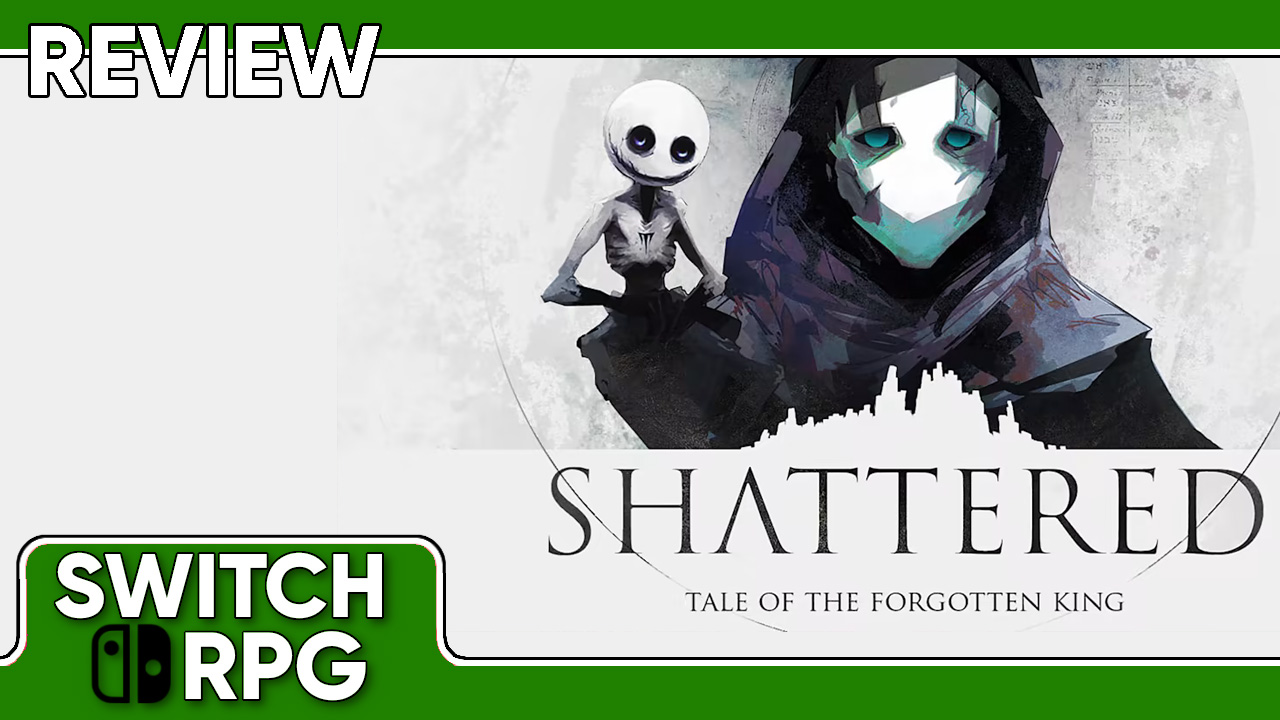 There is a dangerous line being tread in the realm of independent video game development. People want to make the kinds of games that they like. They also want to chase the most popular industry trends. And lastly, they create these products on budgets far smaller than what is expected from mainstream releases, and yet, will receive the same level of critique for their failings. While I don’t love that this is the case, the ambition of indie developers is often their Achilles’ heel, as it leads to all sorts of unfair comparisons that do their extremely hard work a severe disservice.

Even so, when independent developers like Redlock Studio aspire to create Soulslike Action RPGs, they know the quality standards coming into the game. Many developers have limited their game worlds to two dimensions in an attempt to control the flow of action and manage the many elements featured in combat. The Soulslike is a precision-based and flexible sort of RPG, allowing for freedom of customization and rewarding experimentation in exploration and character design. So how does Shattered: Tale of the Forgotten King fare with all of these qualifiers in place? Not all-too-well, unfortunately, as setting a high bar can often mean a great fall. While there’s a number of fresh ideas present, it always comes down to execution, and Shattered misses the mark in more than one way. 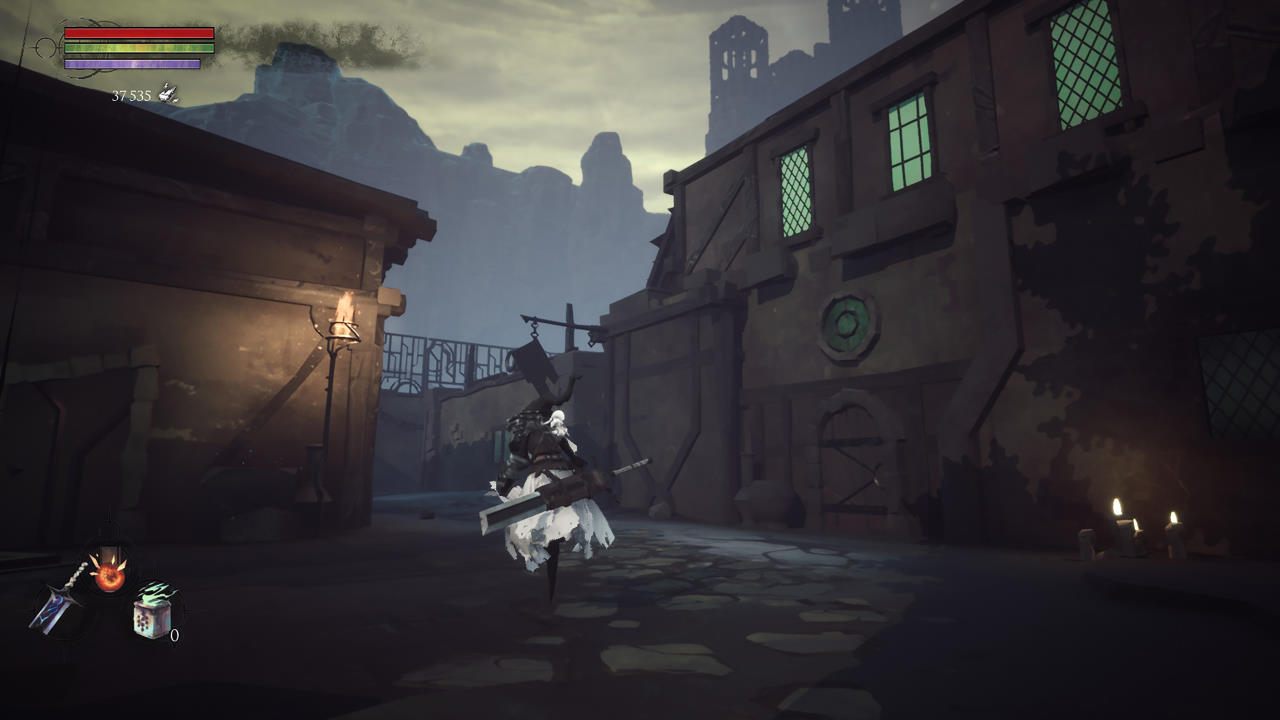 As a traveler through a fractured, digital wasteland, you will need to prove your strength by defeating various enemies both large and small. There are light and heavy attacks, projectile magic attacks granted through specific equipment, blocking, parrying, and of course, a dodge roll. Filling out the player character’s repertoire is a jump and double-jump input, which is essential for accomplishing the platforming portions of the game. The jump can be combined with the dodge input in order to perform an air dash, which can be helpful in creating a bit more horizontal distance to clear certain challenges.

You’ll be doing a whole lot more platforming than you might expect from a Soulslike, and this is a genre that encourages exploration. But Shattered isn’t necessarily about exploring, it’s about linking areas together with 2.5D platforming sections that allow the same freedom of movement in linear, limited-camera movement areas. While the game’s jumping mechanics are strict, it saves its trickiest challenges for the 3D space, where there is a merciful shadow effect that helps telegraph where you’ll land. However, there’s very little challenge to be found in these 2.5D sections, which are mostly used to cover larger swaths of space that, in a more open world (or maybe one with more walls and ceilings blocking the skybox) would be a bit more freely accessible. 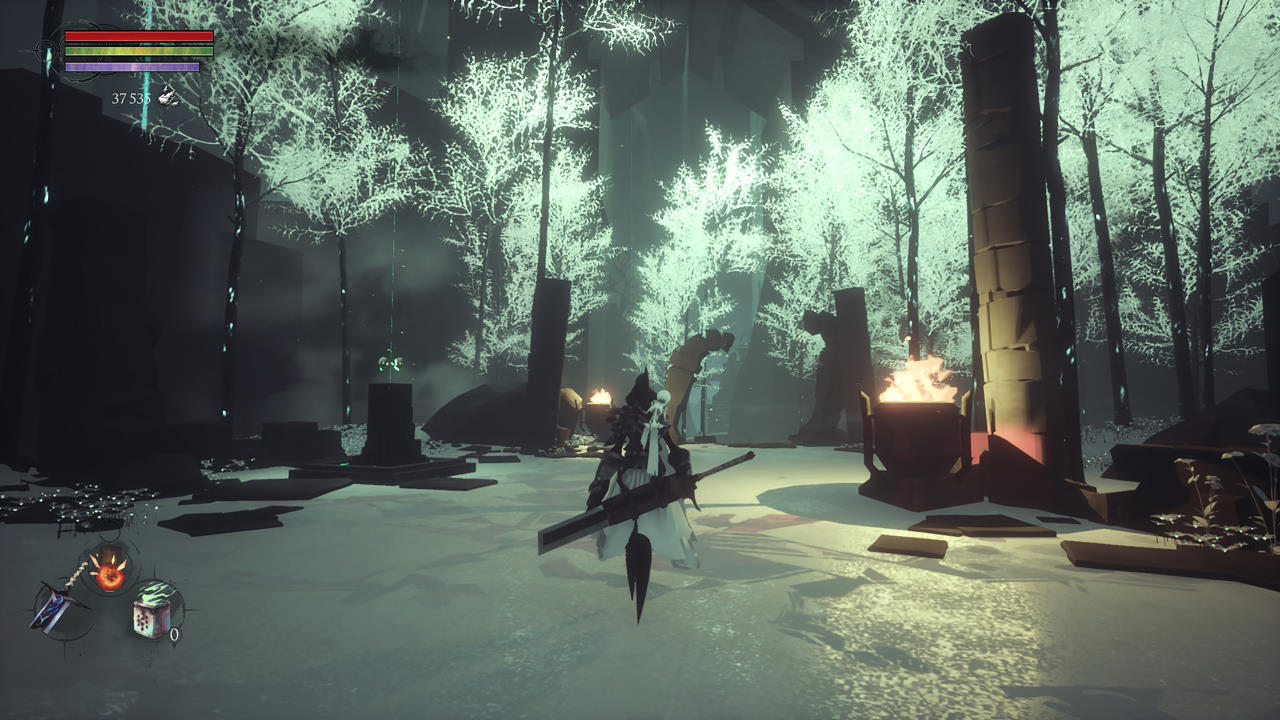 Because of the strange nature of its world design, there are many places and events that can occur within Shattered that might feel accidental, but the game does a fair job at telegraphing its objectives with tangible landmarks and narrative objectives. The game world itself is large, and although it does feature checkpoints that can be used as fast travel points, you’ll mostly be limited to returning to your last save area or the hub zone in Limbo, where you can spend your gathered currency to upgrade your stats, craft stronger weapons and items, and purchase new resources. However, there isn’t much to do outside of combat and exploration, which isn’t necessarily a bad thing, but the limitations as to where you can go due to the game’s level design might end up making this very-3D title feel much more like a Metroidvania. Again, not really a bad thing, but perhaps an example of nebulous marketing.

Shattered features a relatively low-poly, low-texture art style that allows for trippy geometric wide shots and more grounded architecture when needed. The character designs are vaguely humanoid, but alien enough to feel more futuristic and foreign. Unfortunately, the game’s basic brightness and lighting doesn’t reveal a great amount of detail in either the environments or character models, which gives the entire title a sort of dull, flat look. Similarly, there are a number of effects for attacks and magic that share a similar aesthetic to the normal models, which further adds to this unflattering aesthetic. 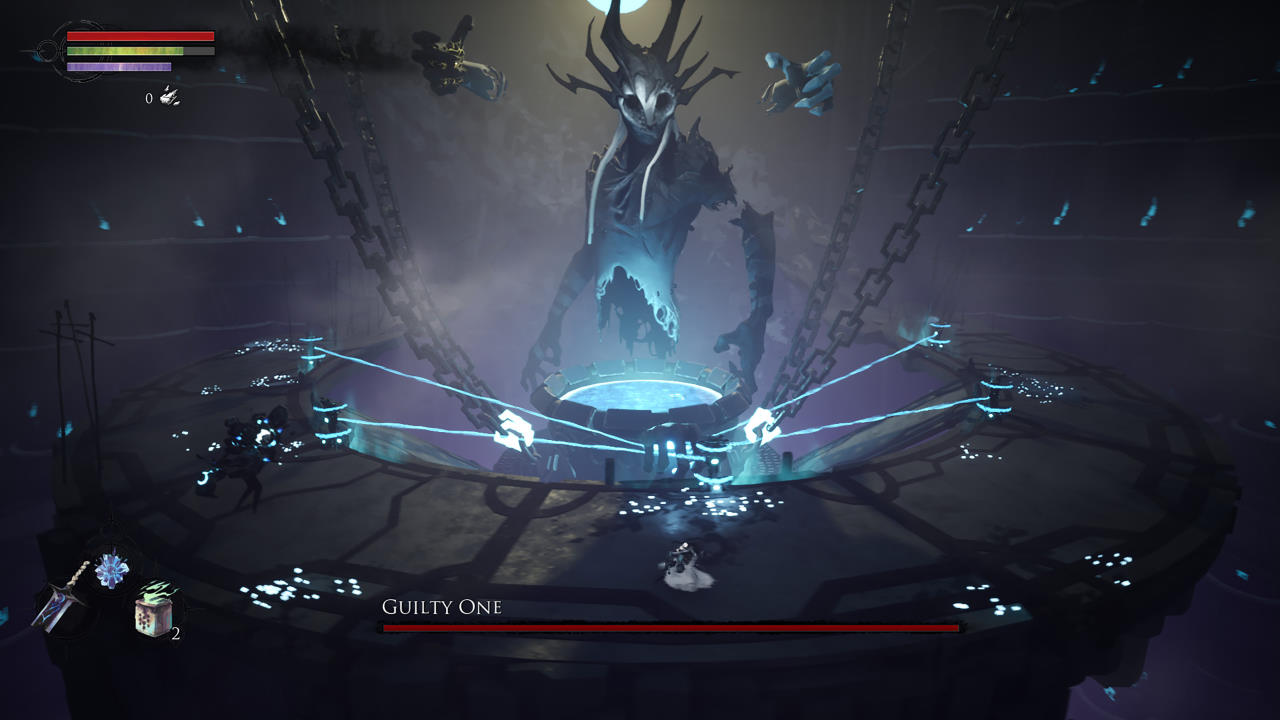 If there’s any place that Shattered does shine, it is in its character art and flavor text. The portraits used to depict the strange denizens of the world are absolutely breathtaking, portrayed in a painterly style that further accentuates their unearthly appearance. The characters feel so grandiose in these pieces of artwork and their character dialogue that it almost feels as if the product would have worked better as a visual novel. Indeed, the amount of lore peppered into your brief interactions with other travelers, discoverable treasure troves of data, and item descriptions paints the picture of a simulation gone terribly wrong, though it seems it was through exploration of the unknown that this twisted world came to existence. In any case, it is at these moments the game feels most compelling, as its soundtrack is entrancingly cyclical and evocative.

Letting this odd mish-mash of aesthetics coalesce is what makes for the most surreal and enticing aspect of Shattered, but of course, the problem here is that these elements are almost entirely divorced from the actual gameplay loop. The sound effects of combat feel oddly mixed and overly loud, and wear out their continuous application in only a few hours. This is ultimately what makes the entire experience so frustrating, but we’ll get to the heart of the problem in the next section.

I wouldn’t consider myself an overly aggressive Soulslike player, preferring to observe enemies and their behavior before planning my means of approach. So I was a bit disappointed when I was able to fell enemies with relative ease by using very simple attack combos in Shattered. Save for enemies with huge health pools and/or attack damage, I rarely encountered problems with the encounter design in the game, even when it would throw more than one enemy at me. Now, there will always be the occasional difficulty spike due to increased stats in new areas, but this isn’t truly an issue when enemy hitboxes often fail to connect. I would attempt to parry an incoming strike only to find that it wouldn’t even connect with my blade or body, and so most battles- even those with bosses- would boil down to simple kiting with no consideration of engaging tactics. If I were hit, I usually had more than enough healing charges to survive. 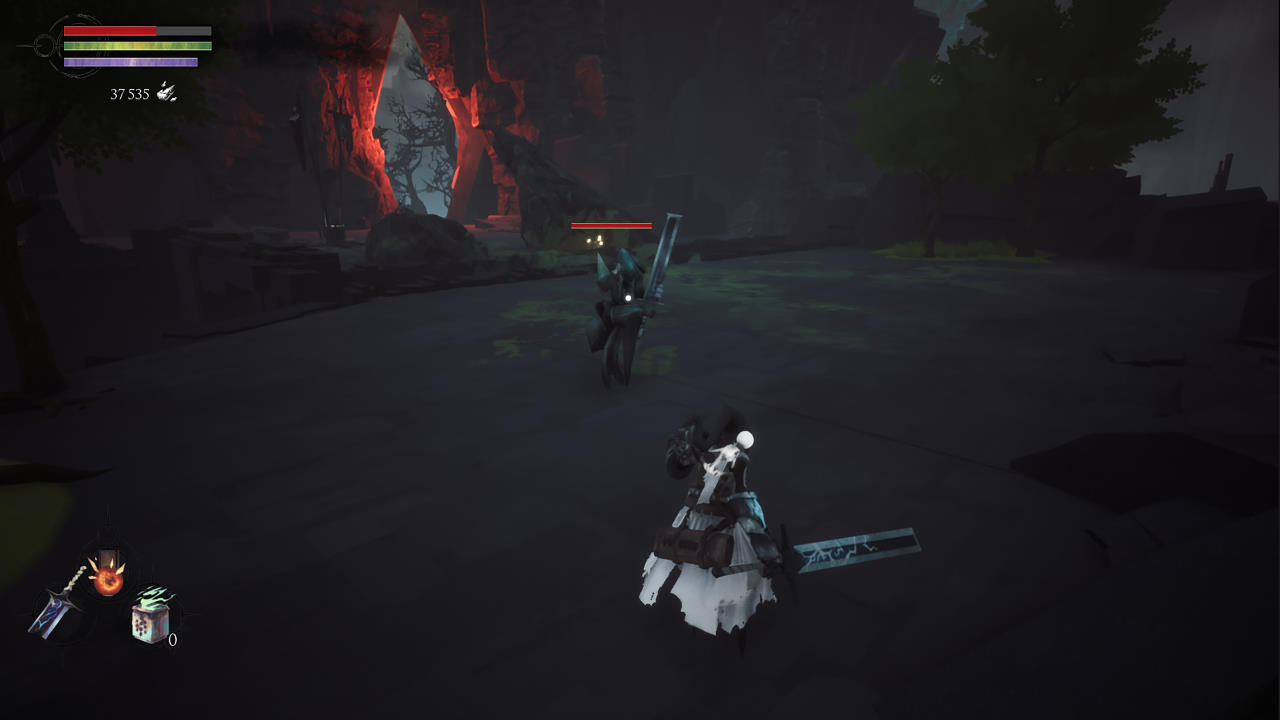 The nature of the platforming sections and the interlinked world design does an independently-developed video game some favors when creating a large play area, but aside from being teleported back to previous locales (sometimes through egregious loading screens), it’s painfully apparent that the game was designed to be tackled in a single direction, with enemies often not really knowing what to do with themselves if you should sneak up from another direction. While there are some nice stops to take as you progress that will task you with orienting yourself in the right way to successfully pull off a platforming challenge, the reward is sometimes so laughably inconsequential, it baffles me as to why someone would waste their time in the first place.

Much of Shattered feels listless, though that feels a bit on the nose, considering its narrative is focused on entropic decay from the mysterious absence of a certain forgotten king. But even its premise, which is slow-trickled across sporadic info dumps that are simultaneously jam-packed with lore while also struggling under the weight of its overly verbose prose comes across as exhausting. Add strange instant deaths, weird platforming challenges, long loading times, screen stutters, and input delay, and Shattered feels like its fighting for footholds while its contemporaries on Switch at least serve competency. This truly feels like a shame when considering the game’s gorgeous and obscure art, but that isn’t enough to sell the overall package. Though you’ll get a good twenty hours of playtime from the experience with multiple endings to be unlocked, you might not really understand how you even made it to the conclusion of the experience.

It’s difficult to recommend this fragmented product when other titles manage to execute all of their elements with more competency, save for its existence as a cautionary tale. Even the Souls games themselves aren’t without a few rough spots, but there’s a certain ratio that must be maintained in order to hold your audience’s attention, and Shattered misses the mark. If you’re dying for a tech-and-cosmic-inspired Soulslike on the Switch, you’ll find it in Shattered, but don’t expect an immaculate experience. There’s moments of tantalizing storytelling and visuals, but it is very much a Soulslike without any bite.