If you’ve hung around the SwitchRPG campfire any over the past year, you probably already know that I’m more or less the resident KEMCO RPG fan here on the site. I wear that badge with honor because I’ve found that, for a budget-tiered traditional JRPG, KEMCO-published titles have the potential to provide excellent bang for your buck despite their inevitable flaws. Back in February I had the pleasure of covering Alvastia Chroncies – another KEMCO title – and it turned out to be my one of my favorite endeavors from the company thus far, snuggled up right up next to 2018’s Dragon Sinker.

Today, we’re covering a different game though. Sephirothic Stories is the latest in the long line of KEMCO-published RPGs to release on Switch, and once again I was excited by the news. Unfortunately, the end result here isn’t near as nice as it turned out for its predecessor. Due to the volatile, but often surprising nature in regards to how KEMCO RPGs turn out, once more I find it necessary to keep you all in know on their latest outing. Let’s dive in. 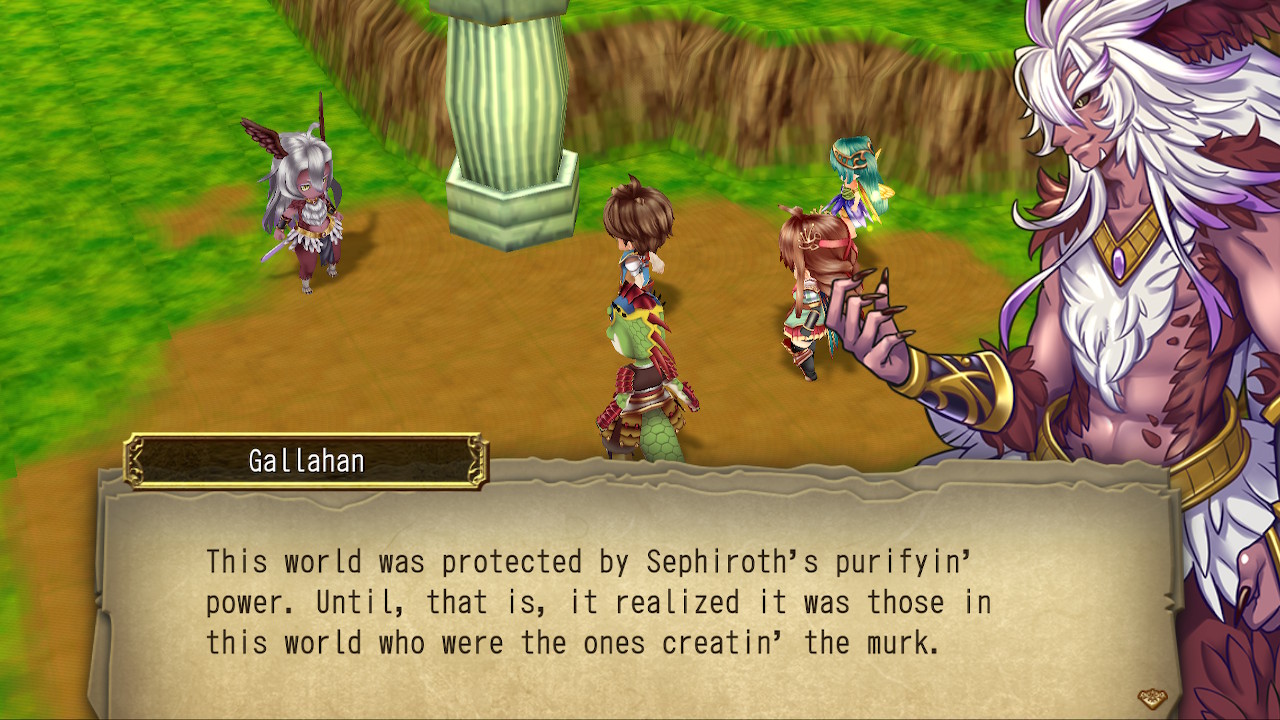 The world of Shendoah relies on a majestic tree – Sephiroth – for the cycle of life. The fruit bore by Sephiroth can either be pure, spawning good creatures, or murk, a miasmic matter that only spreads forth corruption. Fortunately, fairies have the power of cleansing the murk, which can then be re-absorbed by Sephiroth for later use. Left to its own devices, however, the murk can infect every living thing, eventually turning once sentient beings into all-out monsters.

A healthy balance between good and bad fruit has existed for centuries, but recently the scales have shifted in favor of the murk, resulting in an unsustainable amount of vile matter to spread all over the world. Unable to keep up, many towns and locations have already fallen to the murk, with extended travel between places nigh impossible because of it. The our hero of the story, Harold, knows of the murk threat all too well as his baby sister has only mere moments to live before succumbing to the toxin. Fortunately, Harold has a knack for getting around dangerous locations with ease, and his quest to save his “sister” is only the beginning of his tale. 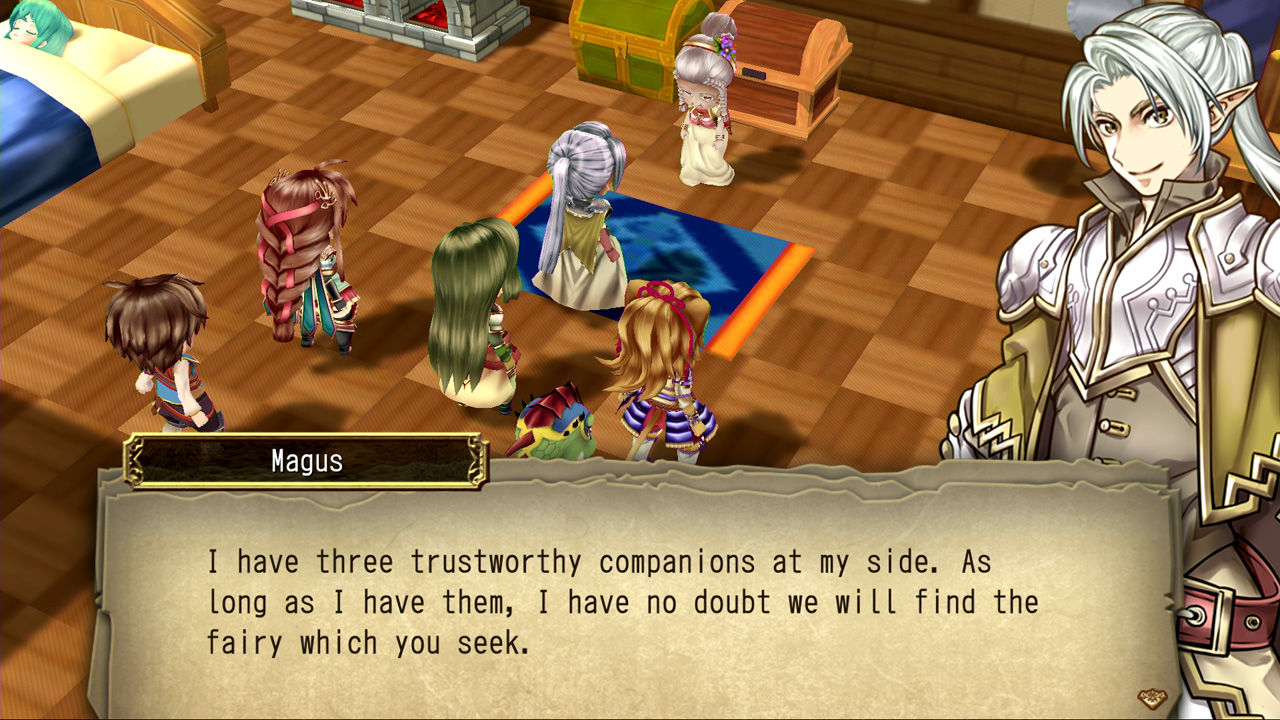 As the plot thickens, it is suggested that a global cleansing might be in store for Shendoah and that an ark is to be constructed to house the few – and strong – that are to survive the calamity. Does this spell doom for our hero, Harold, and his friends, or is the whole thing hogwash? I’ll let you find that our for yourself! Clearly, Sephirothic Stories is heavily inspired by certain religious works and ideaology – like the Biblical flood and tree of life in Kabbalah – NOT the silver-haired stud, Sephiroth. And I’ll admit, I can appreciate a good story with political and/or religious influences, though I lean towards favoring more made-up / original political/religious bodies rather than those that draw upon real-life ones almost exclusively.

I’m not saying we’re dealing with a copypaste situation in Sephirothic Stories – it does inject its own lore influences here and there – but it’s ultimately a moot point due to a throwaway plot, thanks to poor character design and shaky dialogue. You could argue that every KEMCO RPG suffers in the dialogue department, and that is fair, but it becomes a far more obvious issue when the cast themselves are not that interesting.

Sephirothic Stories plays about how you’d expect any KEMCO RPG to, but with a few key differences. Harold and company can explore various locations, fight in turn-based battles, stock up on gear and craft new equipment. Gone are the usual random battles though, and in their place lies a system almost identical to that found in Final Fantasy: Mystic Quest. Enemies are stationary on the map, and a battle will commence upon bumping in to them. This is a huge, potentially positive departure from the random battles found in most KEMCO RPGs, which can sometimes get grating over time. Sadly, it isn’t as impressive as you might think because enemy hit boxes can be quite large, and they often are placed in positions that make the potential for skipping over them impossible. Still, it is refreshing to not have to worry about fiddling with a random encounter toggle, instead being able to see exactly when and what you are about to face. 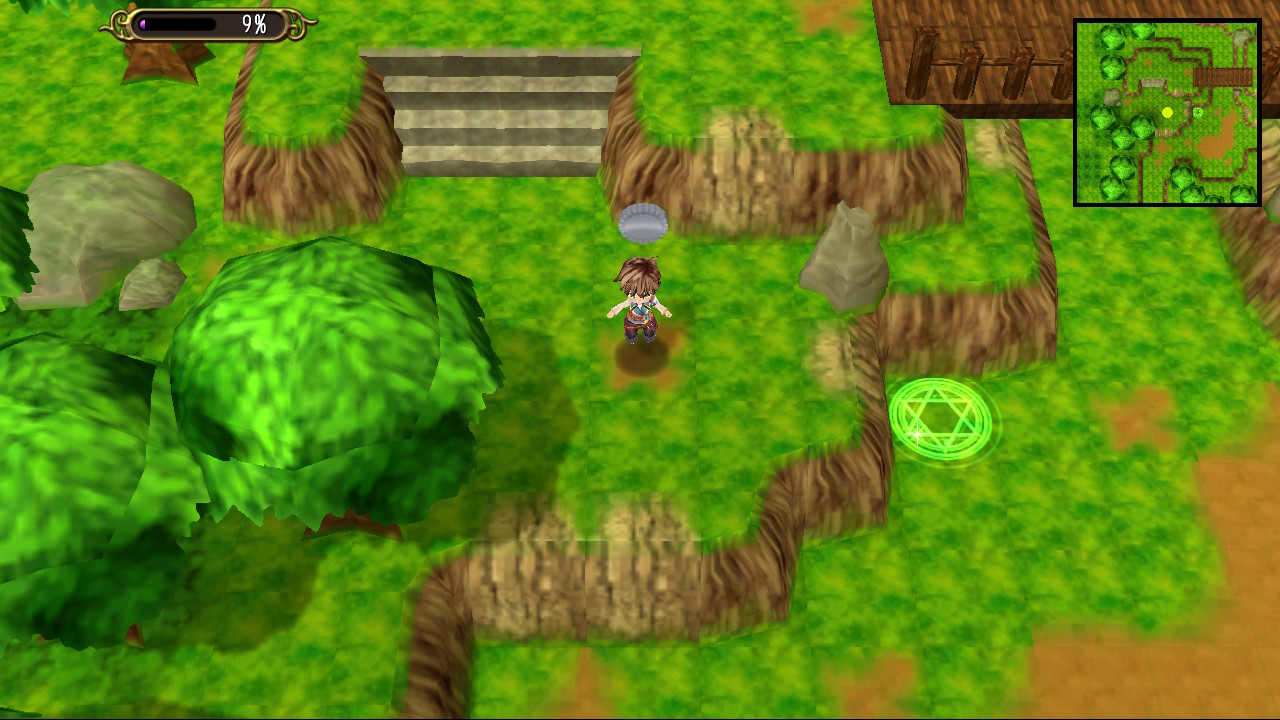 Sephirothic Stories also features a brand-new jumping mechanic that allows you to jump over…no that’s not right. It will let you reach secret…wrong again. Jumping literally only exists here to reach coins, a form of in-game currency. Basically, you can only jump while standing still and it is only useful for reaching these coins. Sounds fun, right? The jumping mechanic, unfortunately, is only the beginning of half-baked ideas in Sephirothic Stories. Another example can be observed by way of fields skills. Each character has at least one of these and they function similarly to how some of the earliest Final Fantasy games let certain jobs see hidden paths, et cetera. The difference here is that it feels really tacked on rather than neatly woven into the experience.

Perhaps the most interesting field skill is Harold’s ability to clearly see enemies. Sephirothic Stories attempts to tie this unique ability into the story itself, but it ultimately lacks emotional impact because of how useless the tool is in execution. Case in point, EVERYONE can see enemies – Harold can just see them easier. The same goes for his lizard friend (his name escapes me now) and his ability to see in the dark. Yeah, he can see a little bit better, but not enough for it to really matter. I suppose it is nice to have these “perks” and not feel pigeonholed into using them all the time, but then what really is the point? 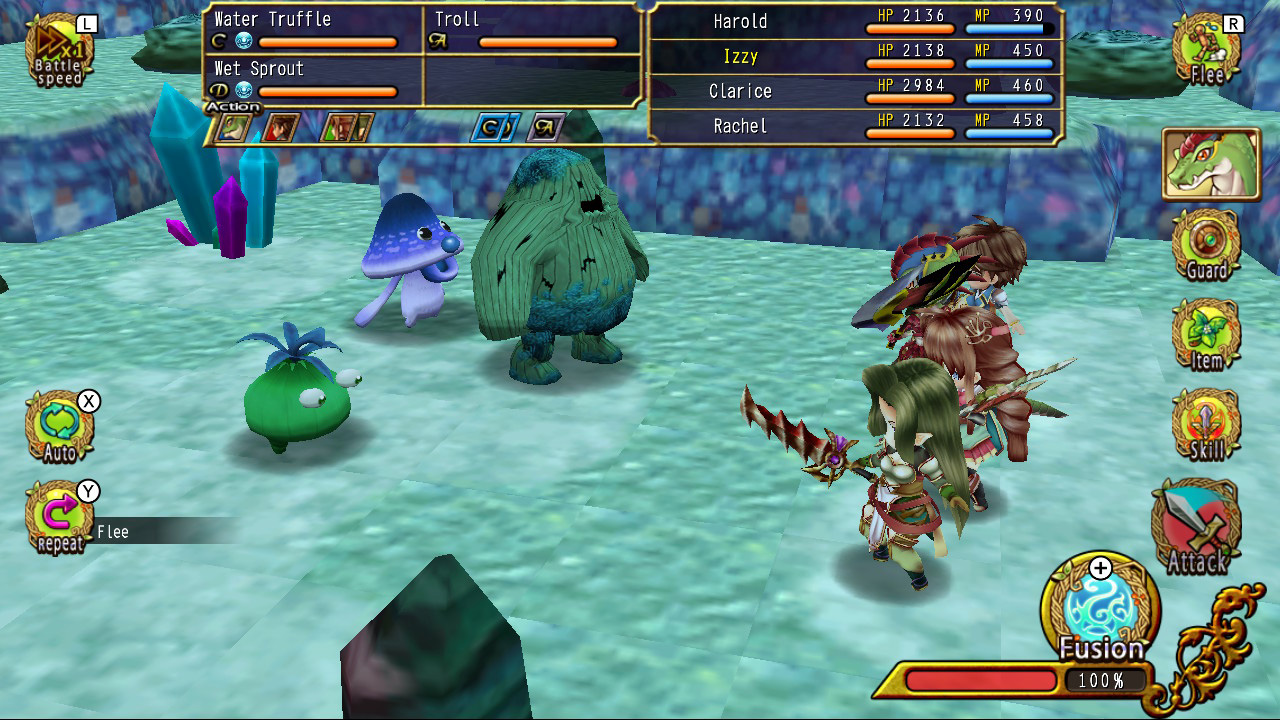 Core combat is pretty standard KEMCO fare. You can have up to four characters in your party at a time, and each person is capable of learning melee skills based on their weapon type, as well as magical abilities based on whatever elemental gear they have equipped at the time. Heroes start out locked into certain elemental schools, however this becomes less of an issue once crafting and better gear becomes available.

At this point, I’d like to think that I kind of have KEMCO’s combat difficulty down to a science. Basically, I try and judge many of their titles based on how much is possible on at least the normal difficulty setting without resorting to premium items, whether they can be purchased with real-life money or bought with in-game currency. In most of their RPGs, premium shop / gambling items are ridiculously overpowered, so being able to avoid those completely while on a medium difficulty or below is key to enjoying the game to the fullest. Obviously, game balance must accommodate for that and most of the time, KEMCO RPGs are built with that in mind. Sephirothic Stories, on the other hand, is more or less impossible to beat without visiting the gambling shop. 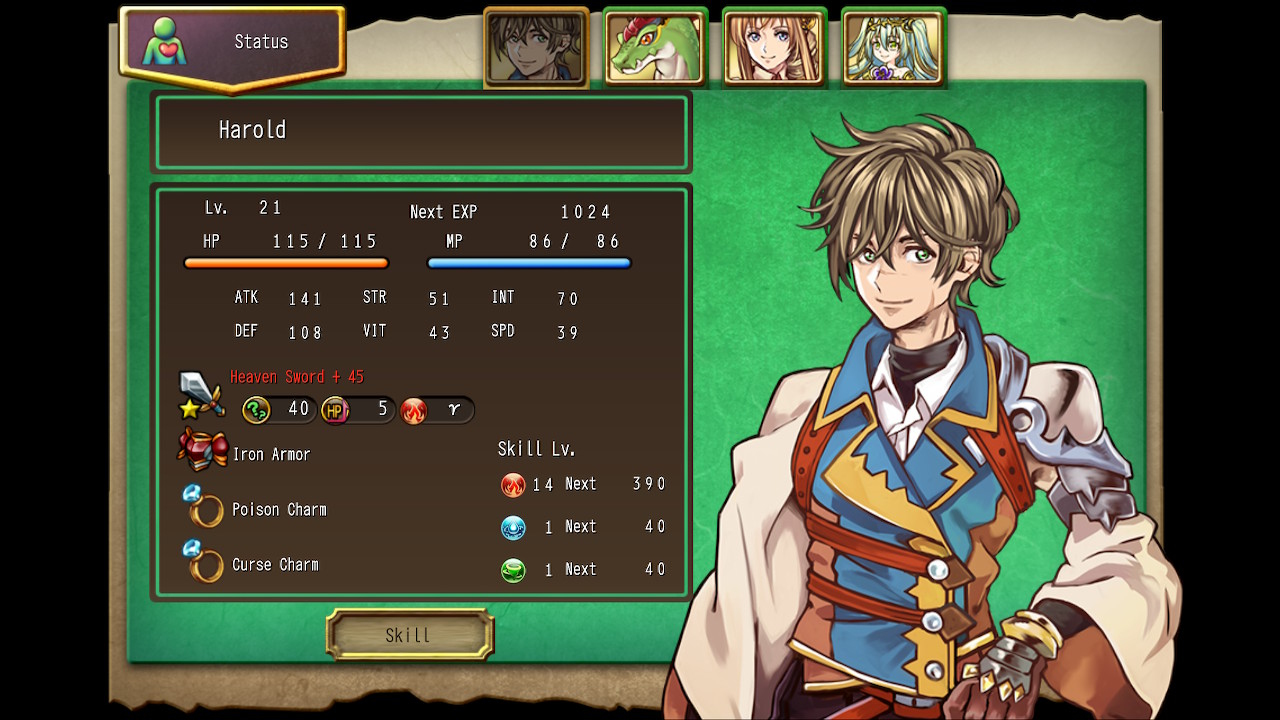 Being able to naturally accumulate the in-game currency required for gambling is fine, but it should never be a required mechanic or the sole source of decent equipment, especially on normal difficulty. Putting the very best equipment behind a shop is nothing new in the realm of KEMCO RPGs, but in most of their titles you can ignore it entirely and easily “make do” with gear found at actual shops and in treasure chests. That is simply not the case here though, so unless you really like the idea behind gambling for equipment to progress, you won’t be happy. 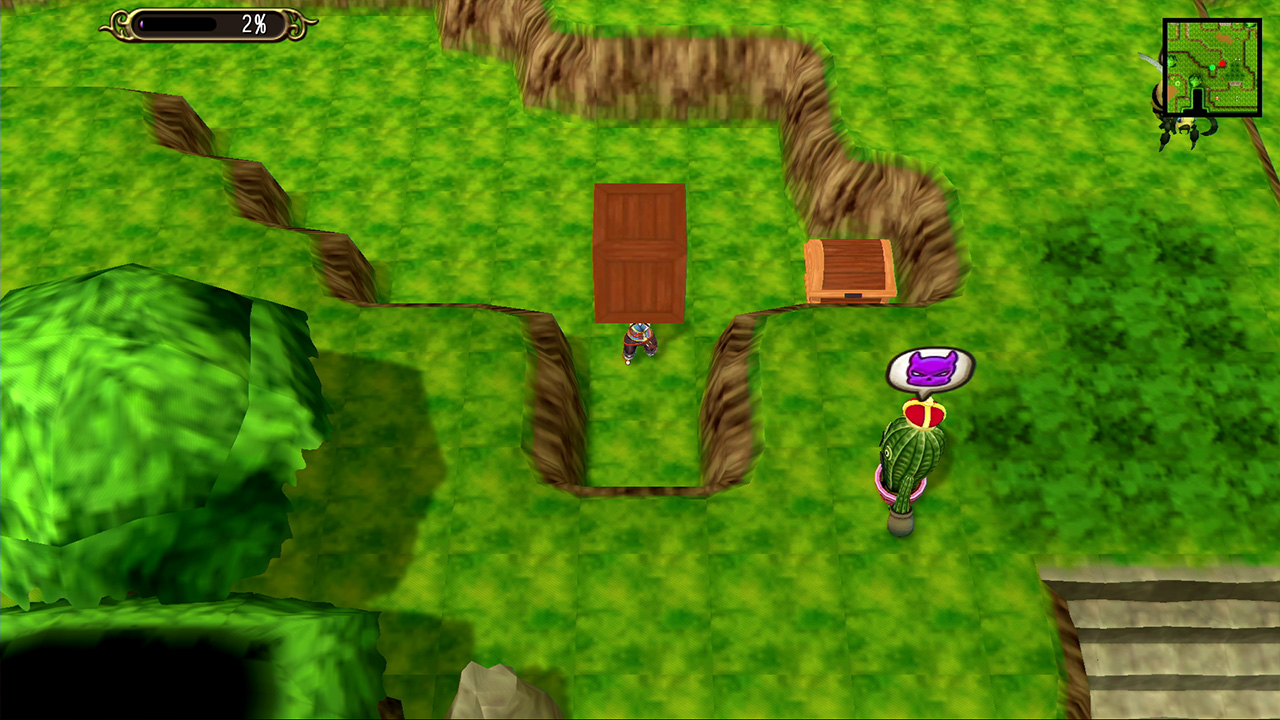 EXE Create, while dabbling in partially 3D titles previously, went full-on 3D for Sephirothic Stories. Alas, the change of perspective does more harm than good here. Although the enemy and character art certainly has some shining moments, terrain textures and assets are incredibly rough. The dreaded “tile grid” can be seen almost everywhere, and in a way as if to suggest that literally no effort was put forth into making it work. Additionally, scripted sequences feel quite odd due to how sluggish both the characters and camera panning feel. I groaned almost every time such an event occurred because I knew that lots of snails-pace gesturing and moving around was in store for the next few minutes.

Sound wise, Sephirothic Stories doesn’t do anything spectacular or memorable. However, I must give the team mad cred for FINALLY getting rid of that awful fanfare whenever the main story quest was updated. Please keep that going, EXE Create! Now, apply it to opening treasure chests and we’ll really be golden.

If there’s one thing that can be said about KEMCO / EXE Create RPGs, they always try and throw something different into the mix. Sometimes, these things pay off while other times, the new features are better left on the cutting room floor. In the case of Sephirothic Stories, I appreciate the ambition to take it full-on 3D, but it ended up being far inferior to the, often times, very appealing 2D spritework in their other titles. But that isn’t the biggest problem at hand, no, that falls to the terrible game balance. I’ve accepted that these kind of games will have an in-game shop, and perhaps multiple premium currencies, but don’t make those systems mandatory for progression even if you don’t have to come out of pocket for it during a normal difficulty playthrough. That said, my adoration for these kind of games still stands, but I sincerely hope that the next one down the pipeline works out for the better.

Can we choose the language? That would at least give this game some value! I know that when I bought a KEMCO rpg in the past for the PC, I was able to choose Japanese as the language and it became good practice.

I’ll check on this for you tonight!

It doesn’t appear that you can change the language settings, but I’ll try and remember to check that on all KEMCO RPGs from here on out.